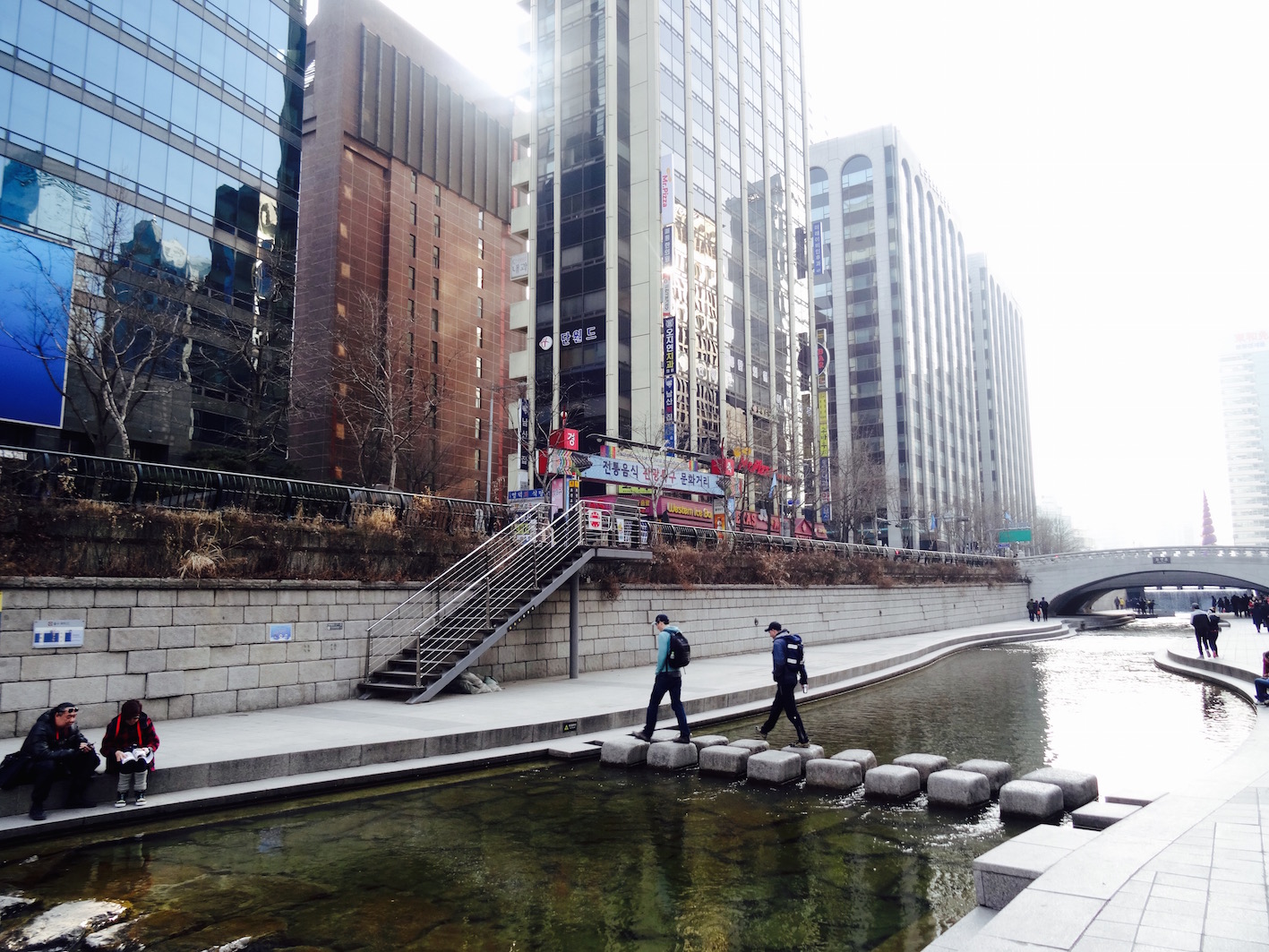 February 2015. I was approaching the end of my second stint in Beijing when another Chinese New Year vacation rolled around. Two glorious weeks off and I could go anywhere I wanted. I weighed up a trip to Japan, but the associated costs seemed exorbitant. Then my buddy Anthony pretty much insisted I went to Seoul, the beloved city he’d called home for six years. In fact, so enthusiastic was Anthony that he got in touch with a bunch of his old pals to make sure I got the most out of my experience. Their hospitality was astounding. I stayed with Irish Andy, who put me up in the spare room of his apartment. Then there was Jacob, Brandon and Connect, who spent a full day showing me around. This shot was taken at Cheonggyecheon, an eight and a half kilometre stream that runs through the heart of the city. A quirky, tranquil escape from the chaotic buzz of central Seoul, Cheonggyecheon opened in 2005 at a staggering cost of 386 billion won ($281 million).

February 2015. This popular square sits at the head of the stream, landmarked by the towering Spring Sculpture and a two-tiered waterfall. On the day of my visit we were able to stop a while and take part in some traditional Korean games. There were groups of men playing a version of Jianzi (shuttlecock) and a bizarre giant board game called Yutnori, which involved the tossing of large foam sticks. The old dear in this photo was having a right old hoot playing Tuho, the throwing of wooden arrows into a narrow-necked jar. Good clean fun for all the family.

February 2015. What a an amazing place Dragon Hill Spa is! I’ve been into massage and spa treatments for years, so this Seoul landmark was always going to find its way onto my itinerary. But I didn’t count on the sheer scale of the place, with floor after floor of baths, jacuzzis, saunas, beauty salons, hairdressers, massage parlours, a gym, a swimming pool, an ice room, a cinema showing Japanese anime and even a giant dark room where people go to nap. In fact, Dragon Hill is open 24-7, so some shrewd folk come here as a cheap alternative to a hotel. However long you stay be sure to follow the signs carefully, as there are nude and non-nude areas throughout the building!

February 2015. I was on my way back home from Dragon Hill Spa when I suddenly realised how hungry I was. So I jumped off the subway at a completely random stop and wandered off blindly in search of dinner. Luckily my haphazard decision paid off and within minutes I’d stumbled across Gong Deok Food Market. With an overwhelming amount of stalls to choose from I quickly settled on this fantastic place. Filling a plastic tray with fish, crab, meat, veggies and pancakes, the whole lot was deep fried and served to me in the upstairs restaurant. Washed down with an ice-cold beer, the bill came to an insignificant 4000 won ($3.30/£2.30/€3).

February 2015. One could argue that if you come to Korea’s capital and neglect to enjoy a night of karaoke then you haven’t really done Seoul. Luckily for me my hosts insisted on a night of beer-fuelled singing at a huge Noraebang (Korean karaoke) centre right in the heart of town. I remember being really impressed by the song menu, with literally hundreds of English tunes to choose from. Even better, many of these were indie and alt-rock, not just the usual radio hits. As is the way with Asian karaoke we enjoyed a vast living room type space to ourselves with a killer sound system and enough booze and snacks to last us into the wee hours. A fun night out!

Like this? Then why not check out my other articles on on Seoul.