How exactly does one write a travel report when you have precisely eight, crappy, fifteen-year-old photos? Well, you’re about to find out! Allan and I had been so excited about the city of Jaipur. Was it really The Pink City? How would its royal palace, Hawa Mahal, match up against the likes of Delhi’s Lotus Temple and Agra’s Taj Mahal?

We came with much anticipation, but sometimes when you’re travelling there are certain places that just aren’t meant to work out for you. For me Jaipur was that place, a frustrating, hot, aggressive, hassle-ridden struggle from start to finish. Our misfortune began from the moment we arrived and the revelation that our hotel, Evergreen Guesthouse, was overbooked and we were basically homeless.

After a long, tiring search for replacement accommodation that dragged on for hours, we finally found some vacant rooms at Ashiyana Guesthouse. Which should have been cause for celebration, right? Well no, because in the beginning the owner refused to let us in and even threatened to call the police. The reason? He suspected we might be Israelis and boy oh boy was he not keen on Israelis.

In the end Ashiyana turned out to be an ok place and Mr. Owner even agreed to this photo with us on the run-down rooftop. Today I can see there are several Ashiyana Guesthouses in Jaipur, though none of them seem to be the place Allan and I stayed at.

Out on Jaipur’s streets, we found ourselves the recipients of much unwanted attention. In fact, we could barely walk a few yards without being confronted by beggars, touts and scammers. The barrage was relentless, considerably delaying our route to Hawa Mahal, the city’s eighteenth century royal residence. It was absolutely exhausting, but we did at least meet some genuinely friendly locals along the way. This dad just wanted his sons to meet some “handsome foreigners” and have his photo taken with us, which was quite the improvement on the events of the morning.

With all the distractions and unwanted attention, it took us hours to reach Hawa Mahal and when we arrived I was distinctly underwhelmed. Nicknamed The Palace of Breeze, this towering residence was built in 1799 as an extension to the Royal City Palace. It basically allowed Jaipur’s royal women a sweeping overview of everyday life without being seen. This was known as pardah, a traditional social practice among Muslims and Hindus. The breeze from which the palace gets its nickname supposedly comes through those open windows to refresh the faces of those peering out. 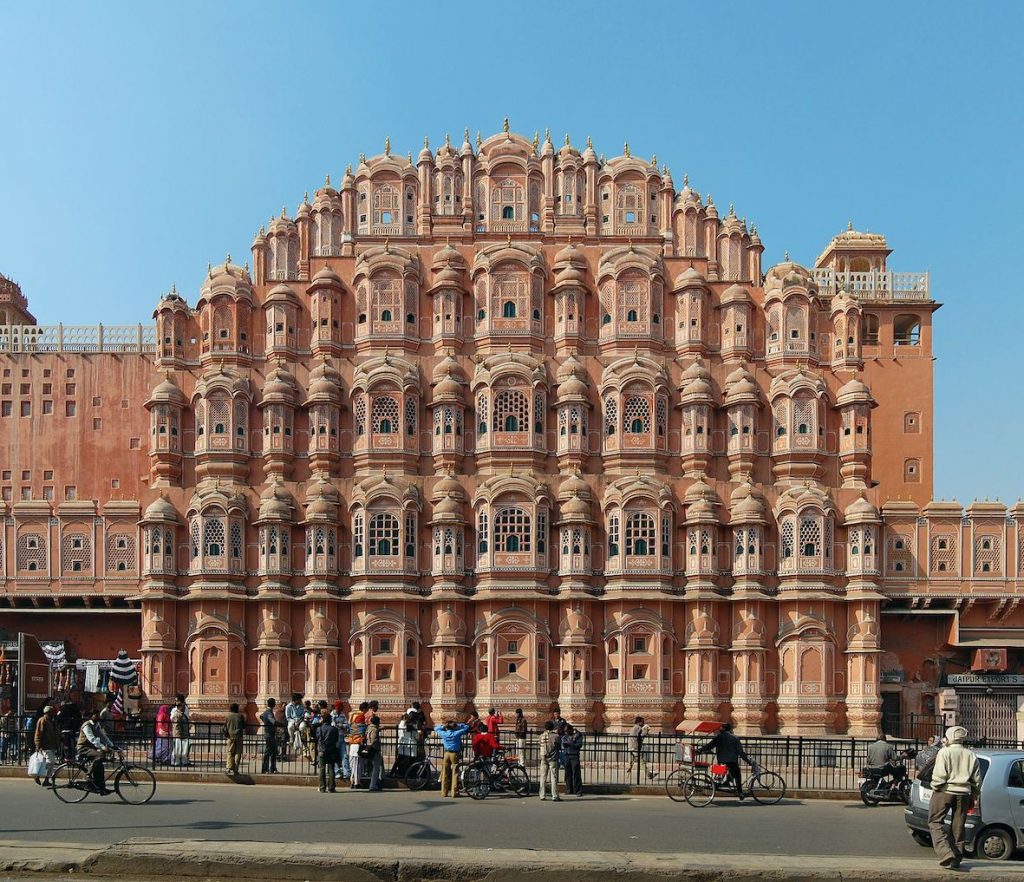 I’ve heard that Hawa Mahal has been greatly restored since my long ago visit and indeed I find it tough to match the photos I see online today with my memories of the place. Looks like it had quite the makeover! I do remember climbing up and poking my head out of those windows (there are 953 in total) to get a sense of what it must have been like for those royal women.

At the top of Hawa Mahal we were treated to some decent views across the city, framed by the arresting backdrop of Nahargarh, a ruined fort nestled in the distant Aravalli Hills. “We should go and see the fort tomorrow!” I told Allan, thinking that things were picking up. And then the rickshaw driver got us hopefully lost on the way home and we ended up being carted all over the city by our hapless chauffeur. I would love to go back and give Hawa Mahal another chance; for more on this popular Jaipur attraction here’s the official website.

The climb up the hill to Nahargarh was pretty cool, even if the way was edged with a stream of setbacks and unpleasantries. We had to keep our eyes on some troublesome monkeys, who seemed intent on stealing my bag, while my innocent greeting to an old woman was met by a barrage of shouted abuse that literally left me speechless. The old hag became so infuriated she had saliva shooting out of the corners of her mouth as she stabbed her walking stick at me.

When we finally got to the top of the hill we saw that… in true Jaipur style… Nahargarh Fort was closed for renovations. It was a real bummer, especially as I’ve since seen photos of just how vast and impressive the building is. Another reason to give Jaipur a shot at redemption I guess. In any case Allan and I made do with some fine views across the city as late afternoon slowly blended into early evening. Still, feeling a bit half-glass-empty, I found myself concluding that as fine as Jaipur looked from up here, it definitely, definitely wasn’t pink!