There’s so much natural beauty in and around the town of Gibraltar! While much of the territory’s tourist love is geared around Gibraltar Nature Reserve, visitors shouldn’t miss out on the lush, fifteen-acre Alameda Botanic Gardens. They were created in 1816 by Gibraltar Lieutenant-Governor Sir George Don, a man whose sterling efforts in social reform and public wellbeing resulted in him getting his very own pair of gates at the entrance to the gardens.

Alameda Botanic Gardens were originally commissioned as a recreational area for the town’s resident soldiers before its eventual expansion into a public park. The garden paths were laid out using local Jurassic limestone rock, while the vast array of plants on offer are both native species and imported. Wooden benches dedicated to the memory of local men and women are a nice touch and I love the red telephone box discreetly tucked away in a quiet corner.

I am, by no stretch of the imagination, any kind of plant expert. So I had to check the signs to see that there are dragon, palm, pine and wild olive trees, along with Chinese hibiscus shrubs and all manner of cacti.

Much of the fine landscaping work you see at Alameda Botanic Gardens today is the handiwork of the Alameda Gardening Club.

One of their main projects is the lovely Children’s Vegetable Garden, maintained by a local primary school. Its a really cute space, complete with scarecrows, Wellington boot plant pots and a handcrafted Bee Hotel. Yes, there are actual bees living inside.

You wouldn’t normally think of public gardens as being dangerous! And yet at Alameda Botanic Gardens they’re keen to inform you about the Processionary Caterpillars, with these signs peppered all around the place. Apparently even a brush of your skin against their hairs can cause severe skin rashes and even eye irritation. You have been warned! 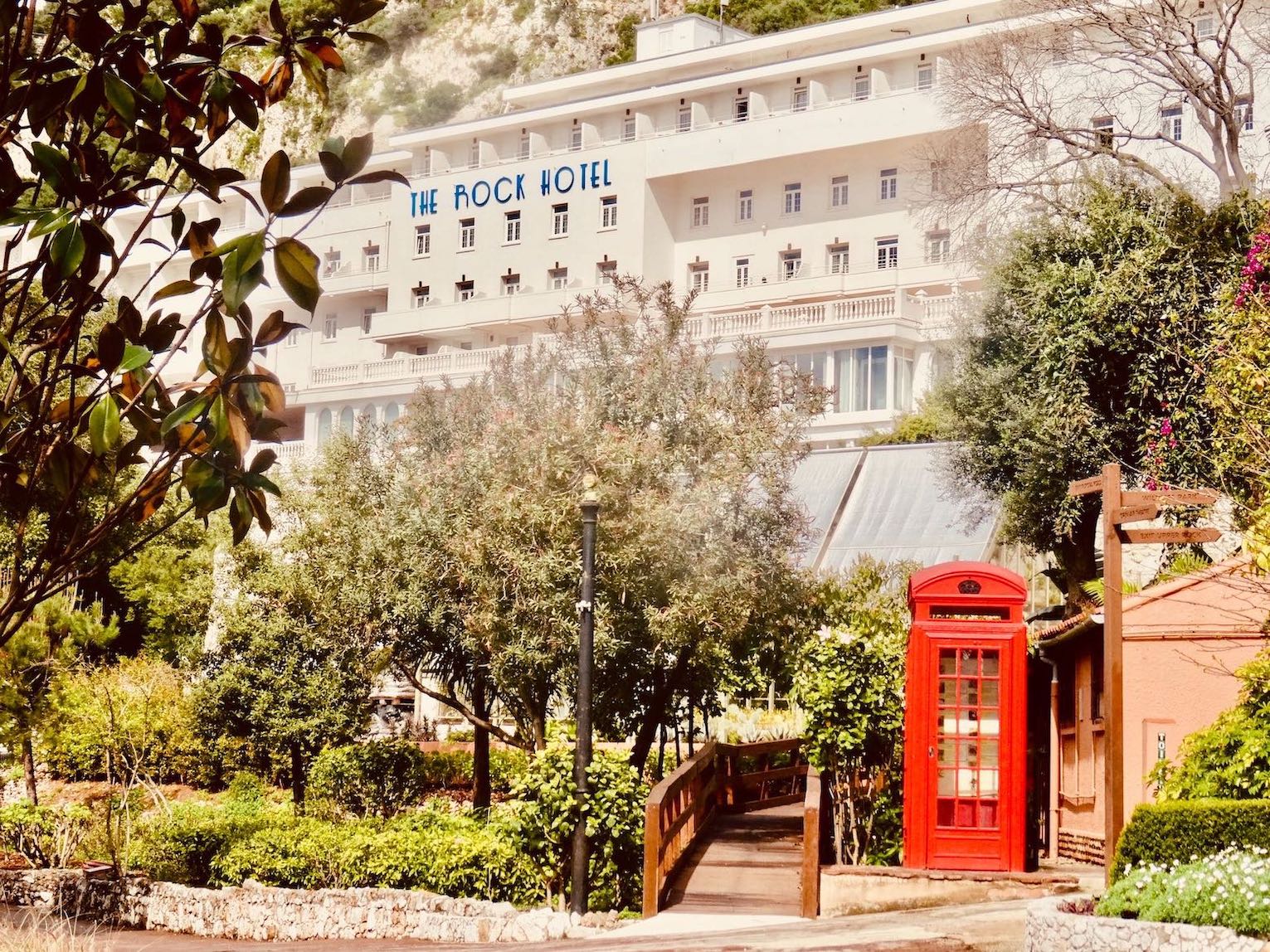 Alameda Botanic Gardens also provide choice angles of The Rock Hotel, Gibraltar’s most famous and distinguished lodgings. You’d be looking at around £160 a night to stay here, though the rooms do have sea views and you’ll have access to a swimming pool, gym, and a sweeping, colonial style terrace where you can presumably sip cocktails alongside grizzled moustachioed naval captains. Built in 1932 by the fantastically named John Crichton Stuart, The 4th Marquess of Bute, the hotel has welcomed a host of A-list guests over the years, including Winston Churchill, President Eisenhower and Sean Connery. John Lennon and Yoko Ono exchanged their marriage vows here on the 20th of March 1969 before bedding down in one of the suites. Some years later I would see their actual wedding outfits on display at The Double Fantasy Exhibition at The Museum of Liverpool. For more info on The Rock Hotel, check out their website here.

The entrance to Gibraltar Nature Reserve via Alameda Botanic Gardens.

March 2017. There were very few people around Alameda Botanic Gardens that day. Predictably, I saw hordes of tourists in town lining up for the cable car ride up to the rock. But you can actually enter Gibraltar Nature Reserve through the back end of the gardens via a twenty-minute walking trail. Just simply follow the signs until you get to the gates signalling the start of the trail.

The start of the Gibraltar Nature Reserve trail at the exit of Alameda Botanic Gardens.

For more on Alameda Botanic Gardens, have a look at their website.

Like this? Check out my other reports on Gibraltar.