May 2007. A friend of mine who’s planning to visit Washington DC this November asked me what my top recommendation was. Wow I thought, that’s a pretty tough one, especially as I didn’t want to go for something glaringly obvious like The White House or one of the main museums. It was this that got me trawling through my photo archives and inspired me to make the American capital my first retro travel report nostalgia series in almost a year (I’ve just been too damn busy posting about Vietnam and China). In the end my top tip to my friend is the unmissable Monuments by Moonlight trolley tour, a two and a half hour drive around the city’s major monuments, statues and buildings. The tour leaves from right here outside Union Station every night at 19:30.

May 2007. Whatever happens you won’t be disappointed with the actual tour itself as it takes you around all of Washington DC’s most impressive buildings, statues and monuments. What can really elevate the tour though is the guide, who enhances the visual experience with historical info, amusing anecdotes and even a few local ghost stories. My chaperone on that long ago evening was Jason, a bearded thirty something who was literally a walking encyclopedia of all things DC. One of the first stops that evening was The Capitol Building, the iconic domed structure where the Senate and the House of Representatives come to chew the fat over policy and to craft America’s laws. Its construction began in 1793 on a design handpicked by George Washington himself. 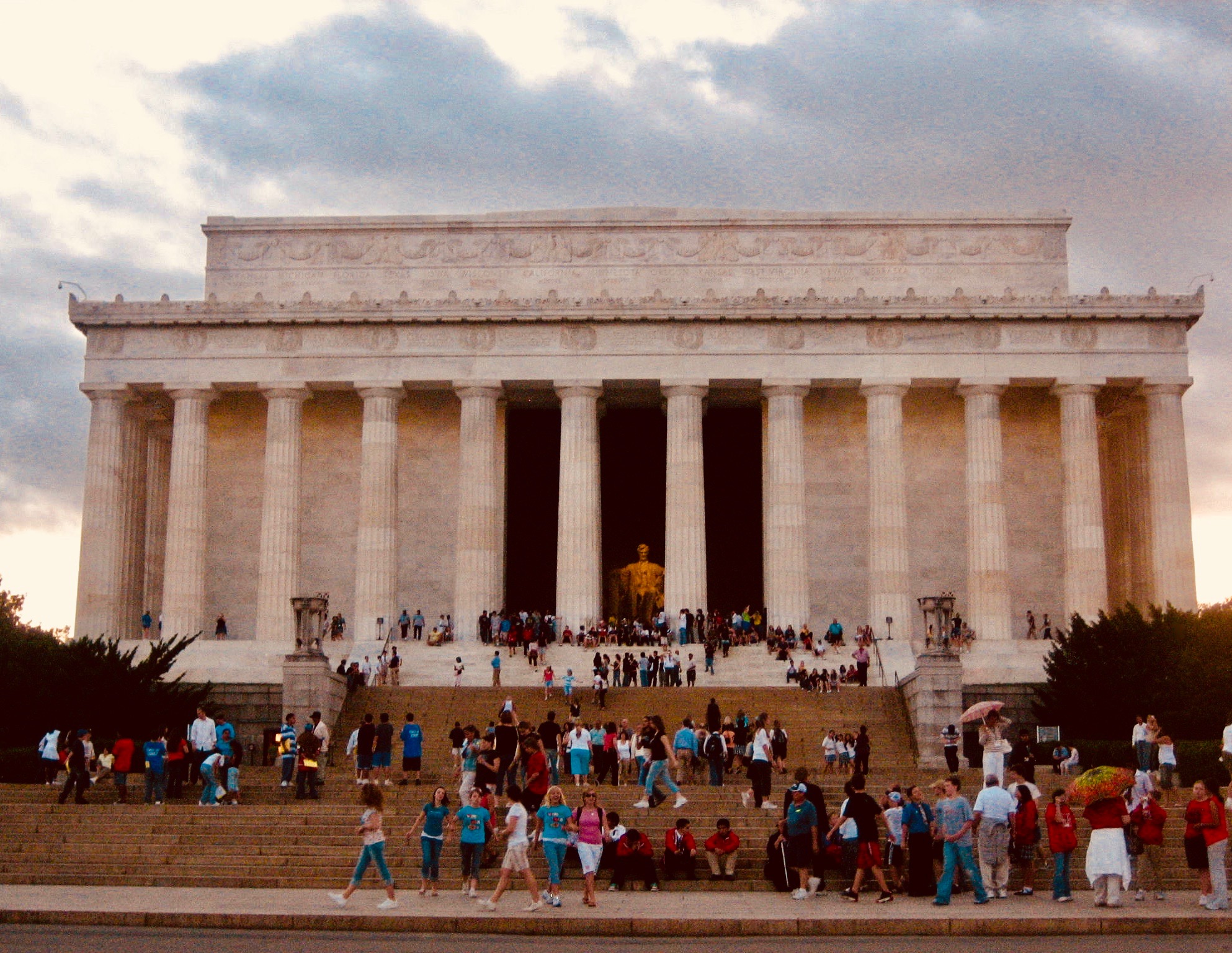 May 2007. Ah, The Lincoln Memorial. The atmosphere here is pretty magical it has to be said, one of those places that just seems to ooze the weight of history. Built to honor Abraham Lincoln, the 16th president of The United States, I found myself instantly thinking of all the films it’s popped up in, from Mr. Smith Goes to Washington with James Stewart, to Clint Eastwood In The Line of Fire and of course the apocalyptic scenes from Independence Day with Jeff Goldblum and friends. On the Monuments By Moonlight Tour there’s always enough time to stop, hop off and explore, so you can trot up the steps and come face to face with the grand white statue of a seated Lincoln gazing resolutely into the distance. I couldn’t help but think of The Simpsons episode where Lisa comes here to seek Honest Abe’s advice after she witnesses a congressman accepting a bribe from a timber industry lobbyist who wants to demolish Springfield Forest.

May 2007. Throughout the tour you’ll be treated to a million and one angles of The Washington Monument, this towering 554 feet Egyptian style obelisk that stands as the tallest monumental column in the world. The most picturesque viewing spot is here at The Lincoln Memorial’s Reflecting Pool. Once again it’s a movie that primarily comes to mind as I found myself picturing Tom Hanks delivering a rousing speech to the masses in Forrest Gump.

May 2007. The Monuments By Moonlight Tour also includes stops at memorials to Martin Luther King, Franklin D. Roosevelt and The Korean War. But it’s probably the final sight that stands out from the crowd. This is the Iwo Jima Marine Corps Memorial, which is actually located in Arlington County Virginia, just across from Washington DC over the Theodore Roosevelt Bridge. Erected in 1954, this dramatic statue stands as testament to one of World War II’s most historic and bloodiest battles. Iwo Jima is a tiny but highly strategic island in The Pacific that was held by the Japanese when it was invaded by 70.000 marines in February 1945. The statue was created from a photo by Jim Rosenthal and shows six US marines victoriously raising the stars and stripes onto the island.

I’m guessing the tour must have gone through some changes over the years, after all the experience covered in this article dates back to 2007. I also went back in 2009 for another great tour, albeit with a more forgettable guide who kept talking about his granddaughter and was just a bit too Disney in his tour style for my liking. But a little research online showed me that the moonlight tour is still going strong and can be booked through a multitude of operators. Expect to pay between $35-40, a hotel shuttle service is usually included.

This travel report is dedicated to Jason, my tour guide back in 2007.

Like this? There are plenty more articles to read from around Washington DC.

Or maybe have a rummage through my pieces from all across The United States.