April 2013. As music fans go few bands can boast such a fanatical and loyal following as New York punk rock pioneers Ramones. Formed in Forest Hills, Queens in 1974, the band that started out as Joey, Johnny, Dee Dee and Tommy were an unassuming scraggly bunch who specialized in sparse, no-nonsense, razor sharp slabs of shouty exuberance. Their music was incredibly simple yet hugely influential and indeed their 1976 self-titled debut album has long been hailed as the very blueprint of punk. I’ve been a big fan since my early 20s, so when I found myself in Berlin on a six-night break I knew I had to seek out the forensic Ramones Museum located in the city’s Kreuzberg neighbourhood. How about a look inside? “Hey ho, let’s go!” 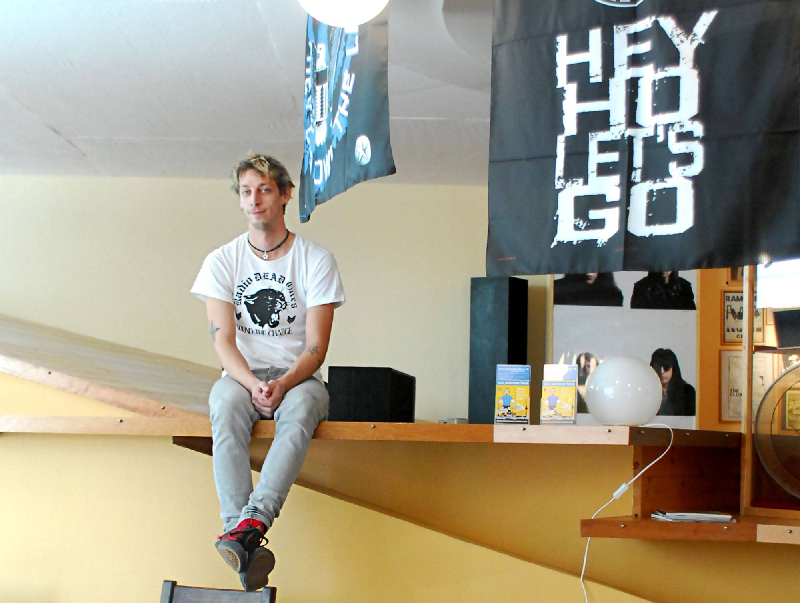 April 2013. If there were some kind of competition to be held to crown the world’s biggest Ramones fan, then a German man by the name of Florian Hayler would surely be a frontrunner. Softly spoken and fittingly leggy, the self-confessed Ramones obsessive attended over a hundred concerts over the years and, as a youngster, feverishly set about collecting as much Ramones memorabilia as he could find. Fast-forward twenty odd years and in 2005 Hayler figured he had enough “Ramones junk” to open a museum. So that’s exactly what he did!

April 2013. There are over a thousand items on display in Berlin’s Ramones Museum. Expertly integrated into a running narrative of the band’s colorful backstory and its place within the punk narrative of the 1970s, you’ll be treated to rare photos, original concert tickets, signed t-shirts, stage outfits, handwritten letters, limited edition posters and personal effects from just about every band member.

April 2013. Ramones Museum is also a major event venue with a host of special annual events and monthly performances from Ramones cover bands as well as local artists and up and coming German groups. They also do regular movie screenings at the museum’s in-house cinema.

April 2013. The Ramones Museum cafe has an excellent and reasonably priced menu which includes vegan options. I can personally vouch for the latte!

Ramones Museum is located at Oberbaumstraße 5 and is open 365 days a year between the hours of 10:00-22:00. Admission is €3.50. For more on this curious Berlin attraction, head to Ramones Museum’s official website.

Like this? Take a look at more travel reports from around Berlin.

Or maybe delve further afield with more of my articles from across Germany.