April 2013. Berlin is a city of many architectural delights and there are few grander structures than the hulking form of Berlin Cathedral, aka Berliner Dom. Dating back to 1894, it was built in the Italian renaissance style with a bulbous green copper dome that can be seen all around the city. The cathedral enjoys a fine location on Museum Island sitting in front of Lustgarten Park overlooking The Spree River.

April 2013. I’ve seen more cathedrals and churches than I could shake a stick at, but still Berlin Cathedral’s octagonal interior stands out as one of the finest. There’s all manner of gold bling to take in, some detailed mosaic flourishes and the usual array of grand paintings depicting key scenes from The Bible. The main altar, designed by the famed Prussian architect Friedrich August Stüler, is made from white marble and onyx.

The Sauer organ at Berlin Cathedral.

April 2013. Berlin Cathedral’s organ is an absolute beast! It was created by Wilhelm Sauer, a legendary pipe builder of the romantic period. Sauer put together over a thousand organs during Germany’s great Romantic period and the organ in Berliner Dom is said to be his masterpiece. It features over 720 pipes and 113 registers. 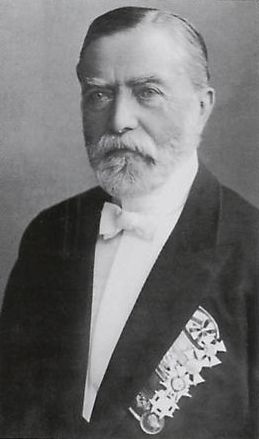 Wilhelm Sauer. Not perhaps the guy to light up a party, but he certainly knew how to build a decent organ.

City views from the dome at Berlin Cathedral.

April 2013. There is much to see in Berlin Cathedral, which is part church, part museum and part concert hall that plays hosts to all manner of live performances throughout the year. You can go down to the Hohenzollern Crypt to check out the one hundred or so sarcophagi containing Germany’s past rulers, including Friedrich I and Queen Sophie Charlotte. For me the highlight was climbing the 270-step imperial staircase for decent city views. There’s also an elevator option for the disabled/elderly/lazy.

The TV Tower from the dome at Berlin Cathedral.

April 2013. You can pick out a bunch of city landmarks as you make your way around Berlin Cathedral’s dome walkway. This shot takes in the TV Tower (Fernsehturm) looming authoritatively over St. Mary’s Church.

City views from the dome at Berlin Cathedral.

For more info on Berlin Cathedral, including events, opening times, entrance fees and more, have a look at the official website.

Like this? Take a look at more of my travel reports from around Berlin.

Or maybe delve further afield with my articles from across Germany.