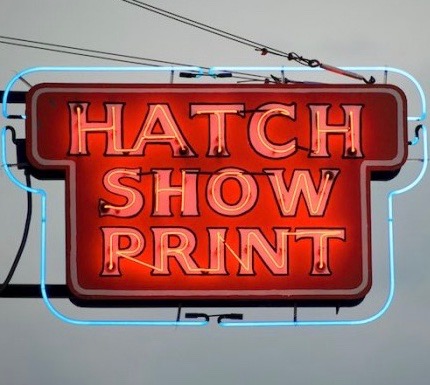 May 2009. If you’re looking for a tasteful souvenir of your time in Nashville, there really is only one choice when it comes to authenticity. Forget all of the souvenir tat down on Broadway, head straight for Hatch Show Print, a one hundred and thirty eight year old Nashville institution that serves as both an historical letterpress workshop as well as informal poster museum.

May 2009. Described by enthusiasts as “a living museum” of the city’s music and entertainment industry, I remember feeling quite overawed by the exhaustive collection of posters, canvases and postcards on display. Many of these are antique prints and would set you back a pretty penny.

May 2009. From modern day titans like Johnny Cash, Elvis, Led Zeppelin, The Beach Boys and The Rolling Stones, to old school legends like Ernest Tubb, Woody Guthrie and Buddy Holly, you shouldn’t have a problem finding who you’re looking for. I can’t say I’d ever heard of Uncle Dave Macon (nor indeed his son Dorris) prior to my Hatch Show Print visit, but this concert tour promo print certainly gave me a giggle.

May 2009. The printing process has apparently stayed just the same as when Hatch Show Print first opened its doors back in 1879. The letterpress is used to roll ink on letter-carved wood or metal, which is then transferred onto paper. I remember long blocks of wood piled up all over the workshop. I didn’t touch any of it.

May 2009. Back during my visit Hatch Show Print was a small and cramped but highly charismatic store on Lower Broadway. But in 2013 the whole show, along with its original sign, moved over to 224 Fifth Avenue South just across from The Country Music Hall of Fame. I have no idea if the cat made it over too. Now visitors can wander a cavernous gallery of their finest prints and even take tours of the workshop in which you can have a go at using a letterpress yourself. Shop around online for the tour that suits you, there are usually three a day, with tickets going for between $12-18.

Or maybe delve further afield with a whole bunch of pieces from across The United States.