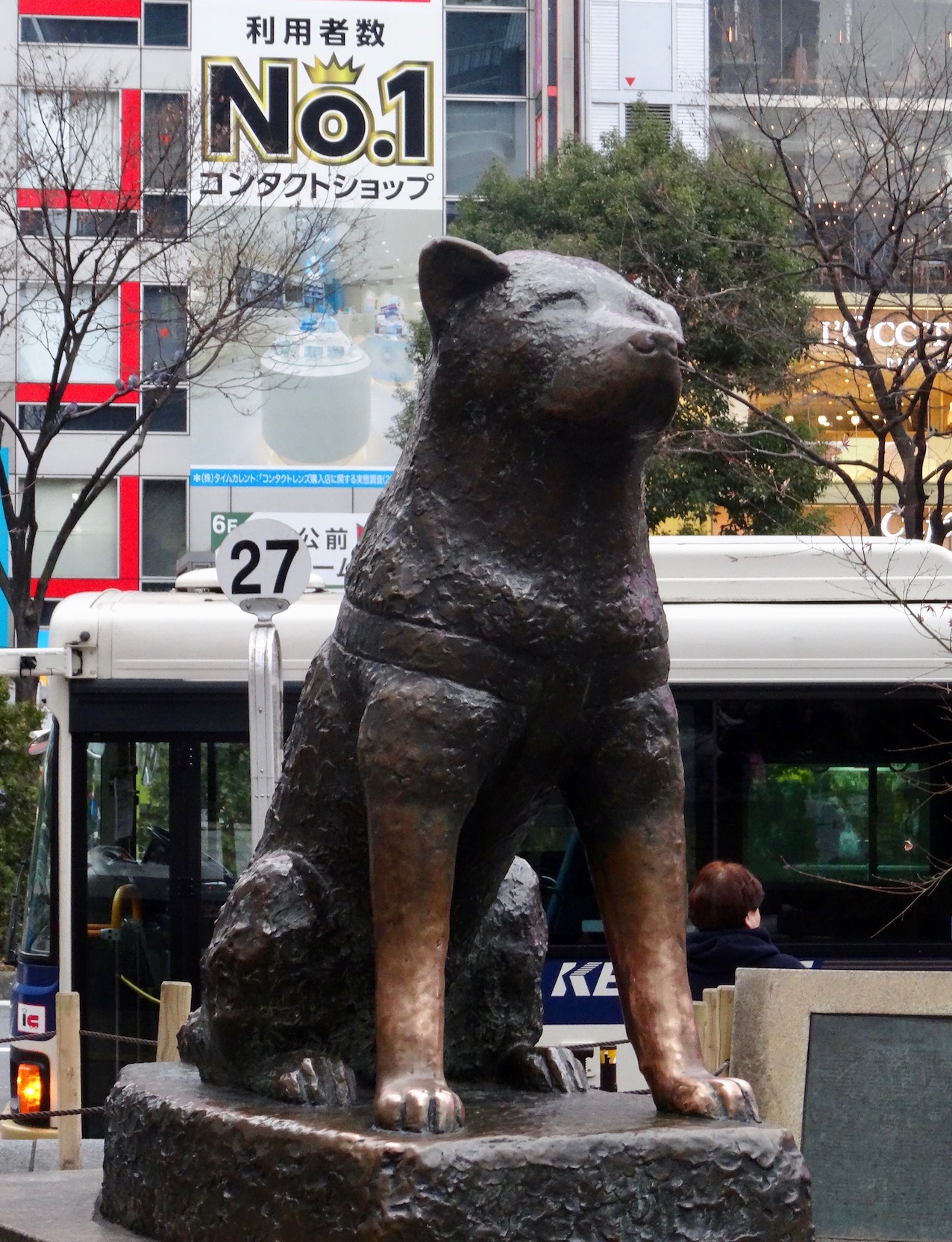 February 2019. Much like The Little Mermaid in the Danish capital Copenhagen and Mannekin Pis in Brussels, Tokyo’s bronze Hachiko statue is a diminutive, understated sculpture perhaps in danger of underwhelming the casual tourist. But if you’re aware of the dog’s touching backstory and hugely important place in Japanese culture, you’ll appreciate that this is a special Tokyo spot! Hachiko was a golden brown Akita dog that arrived in Tokyo in 1925 having been adopted by Professor Hidesaburo Ueno, an agricultural scientist and university lecturer. Master and canine became the best of friends and were inseparable, to the point where the professor’s wife became more than a little jealous, suggesting he might prefer to start sleeping with the dog instead of her! 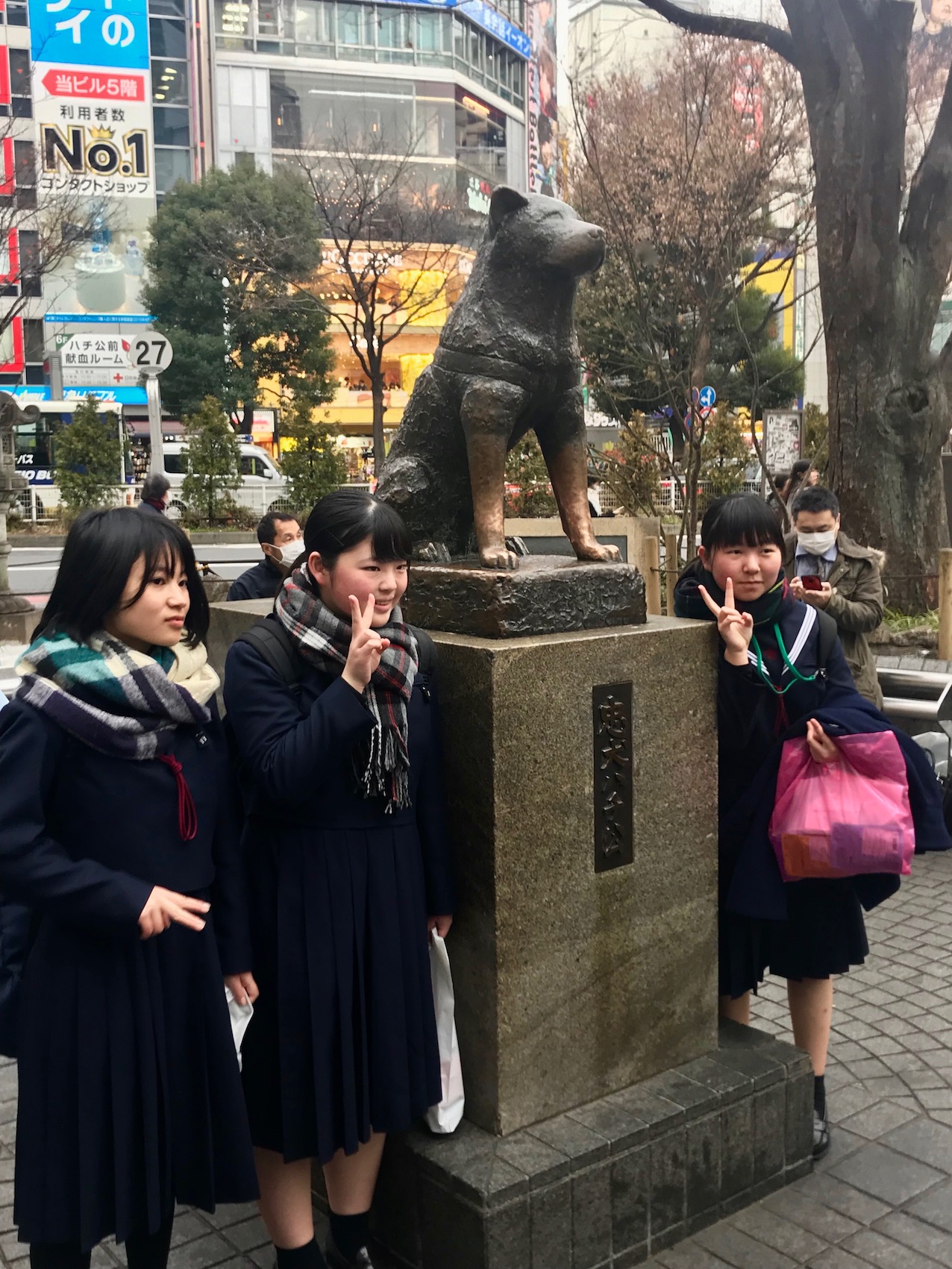 February 2019. Hachiko became so attached to his beloved owner he began accompanying him on his daily commute, right up to the entrance of Tokyo’s Shibuya Train Station where Professor Ueno would go to catch a ride to work. Each day, without fail, Hachiko would also trot back to the station to greet the professor upon his return. This continued for over a year until quite suddenly Mr. Ueno dropped dead during a lecture, having suffered a cerebral hemorrhage. Confused and anxious, but ever-hopeful, Hachiko returned to Shibuya Station every day for the following nine years, nine months and fifteen days, never giving up hope that maybe… just maybe… the professor would appear once again. This daily vigil continued right up until Hachiko’s death in a Shibuya street near the station. 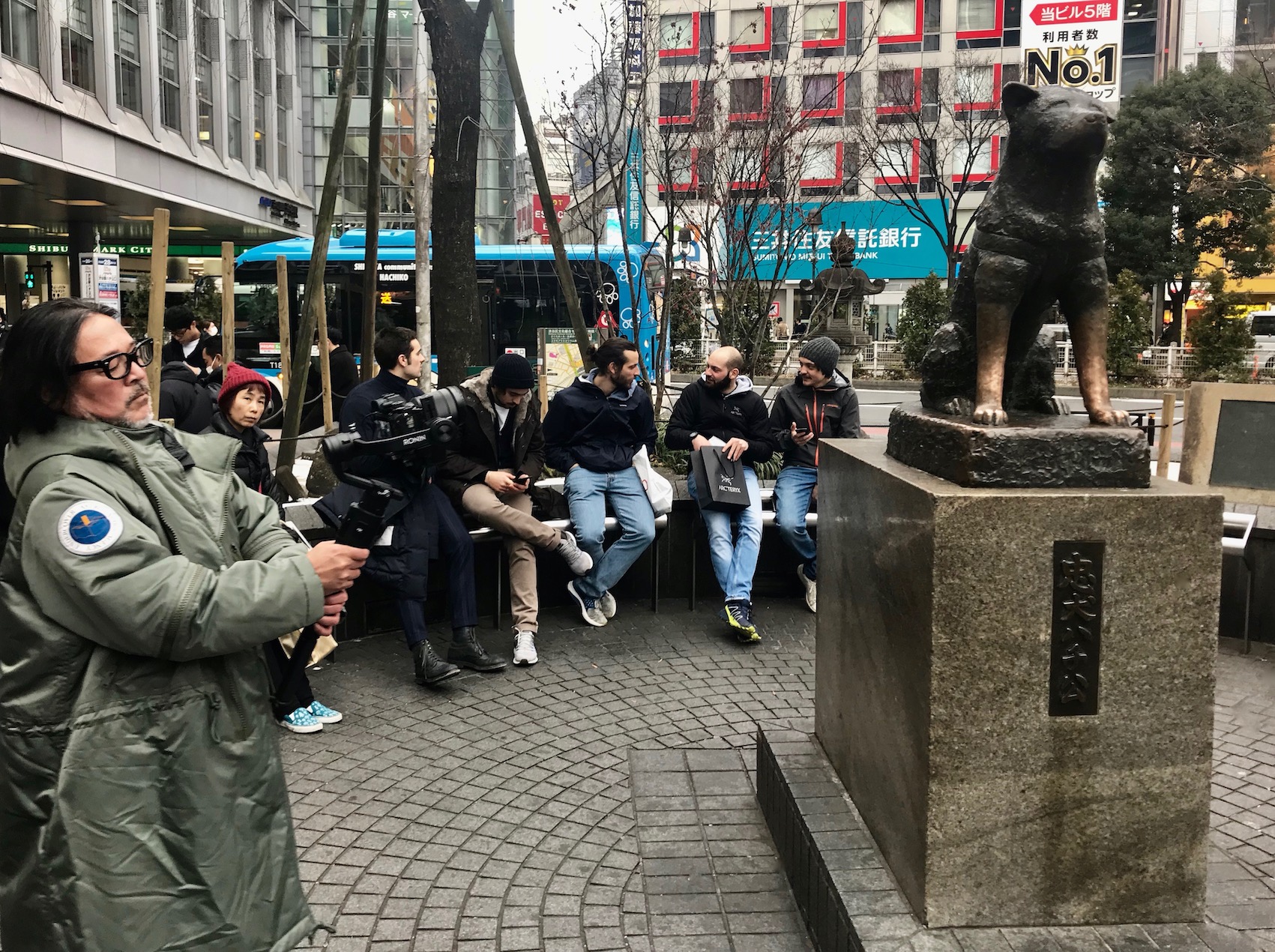 February 2019. Celebrated as a national symbol of unwavering loyalty, today Hachiko is remembered right outside Shibuya Station near the very spot he sat waiting for his master. A steady stream of domestic and foreign tourists come to have their photo taken with him and some, like this guy, can be pretty serious about it. He seemed to be making some kind of documentary about the statue and was interviewing people about why they felt it was so important to come here and pay their respects. On some days a local Tokyo man acts as a statue volunteer greeting visitors, keeping the queue in order and helping to take group photos. 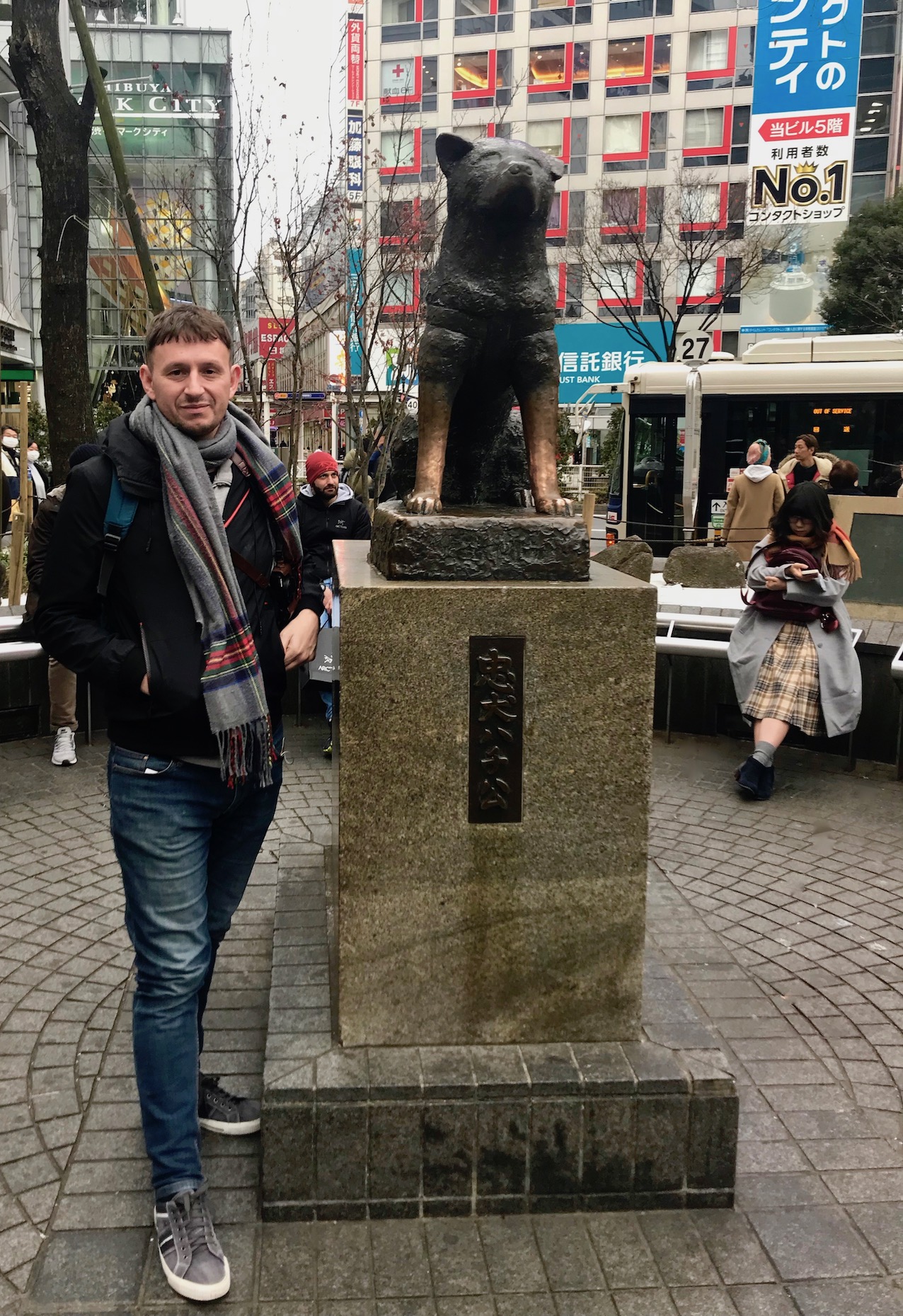 February 2019. Having stood around people watching for a bit, my own experience with Japan’s most famous dog finally came. It was a really nice moment, especially as I’d taken the time to watch both of the excellent Hachiko movies prior to my trip. The original Japanese film, Hachiko Monogatari, is the perfect entry point, while I also really enjoyed the American remake Hachi: A Dog’s Tale starring Richard Gere and Joan Allen. 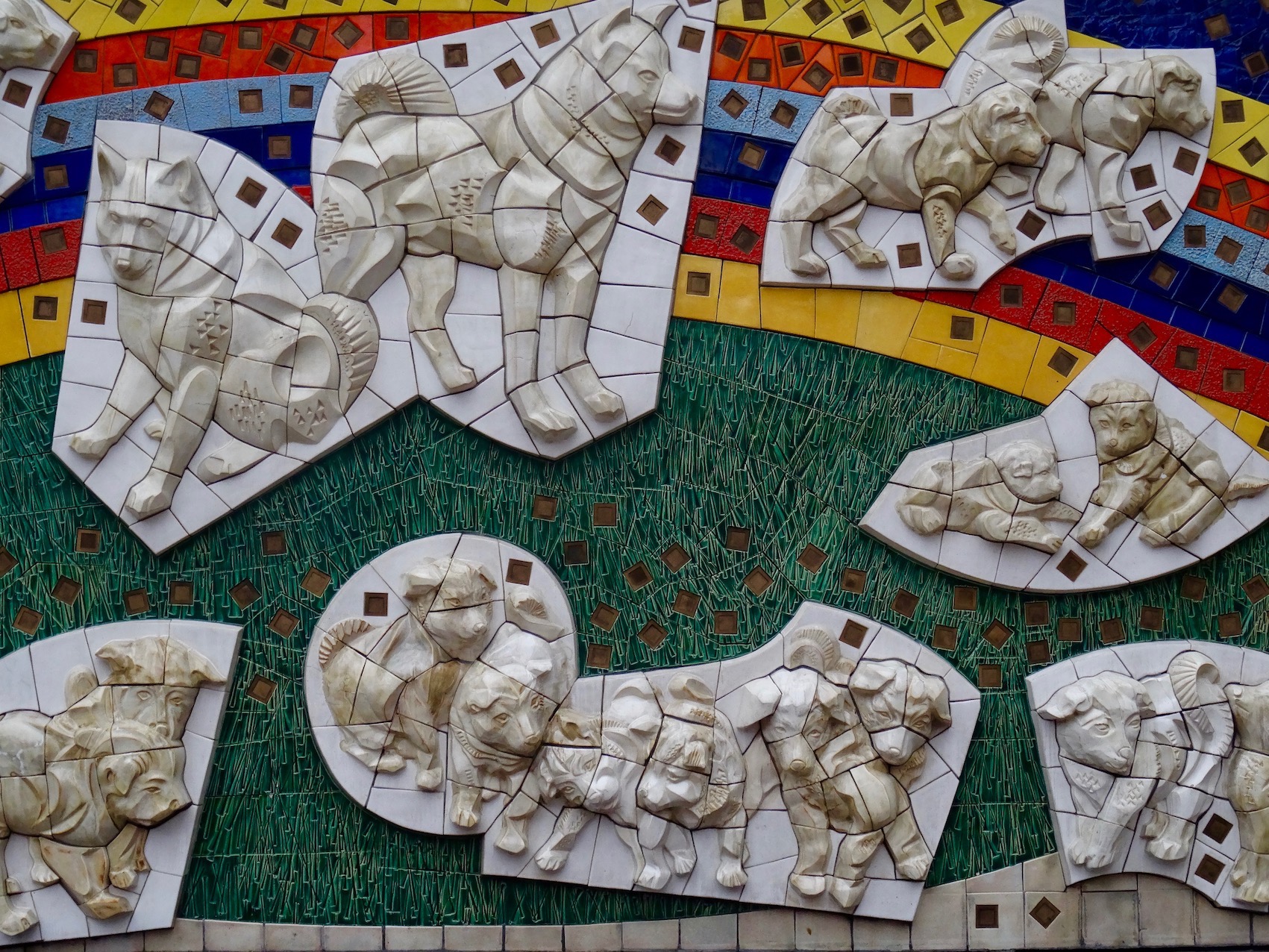 February 2019. Once you’re done with the statue, don’t miss the adjacent Hachiko Family Mural, a popular meeting spot for those wanting to avoid the intense crowds on the other side. This ceramic installation was created by the Japanese artist Ryutaro Kitahara who imagined what it would’ve been like had Hachiko raised a family of his own. To come and see Tokyo’s hallowed Hachiko sights head for Shibuya Station, which is served by a whole bunch of lines via The Tokyo Metro, JR East and a few private railways. Look out for the handily named Hachiko exit!

Interested in the Hachiko story? Then why not also check out my travel report from Aoyama Cemetery, home to Hachiko and Professor Ueno’s graves.