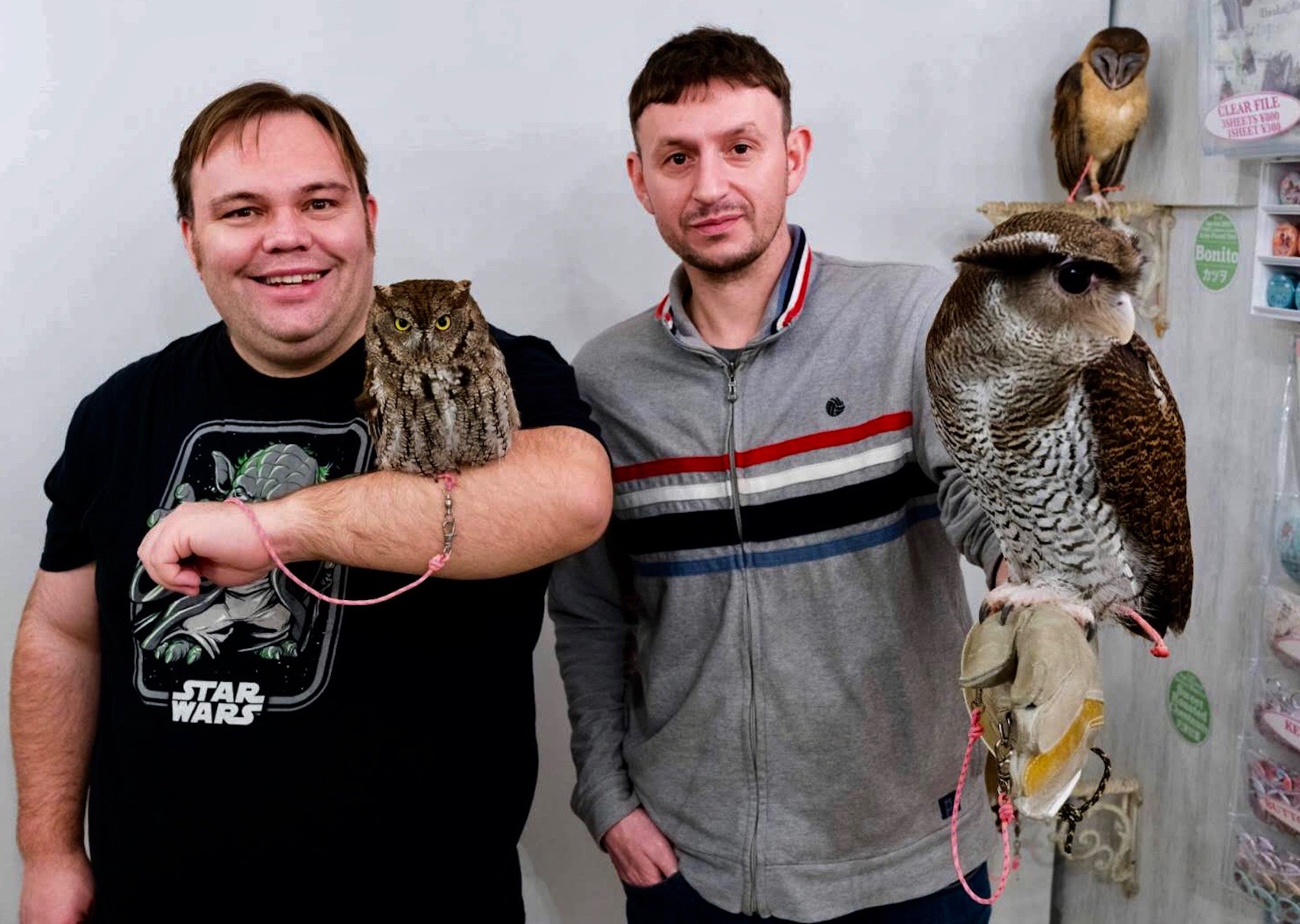 February 2019. I’ve always been a bit fascinated by owls, especially as they seemed to consistently pop up in some of my favorite movies and books. From the wise and grumpy birds of Winnie The Pooh (Owl) and Disney’s The Sword in the Stone (Archimedes), to the altogether more cheerful Big Mama from The Fox & The Hound and the loyal Hedwig of Harry Potter. Like many people I find these amazing creatures beautiful, mysterious and at times slightly unsettling. Imagine then how piqued my interest was when I heard that Owl Cafes were a thing in Tokyo. Yup, it’s pretty much what you’re thinking…. a café where you can hang out with rare breeds of owl. The Tokyo owl scene is so developed these days you’ll literally bump into owl touts on the street. But in truth many of these places are little more than tourist traps where the wellbeing of the owl is… how can I put it… not exactly a priority. If you’re serious about picking a place that really cares about their birds’ wellbeing and has gone above and beyond to create just the right environment, then look no further than Akiba Fukurou Owl Café in the city’s Akihabara district. 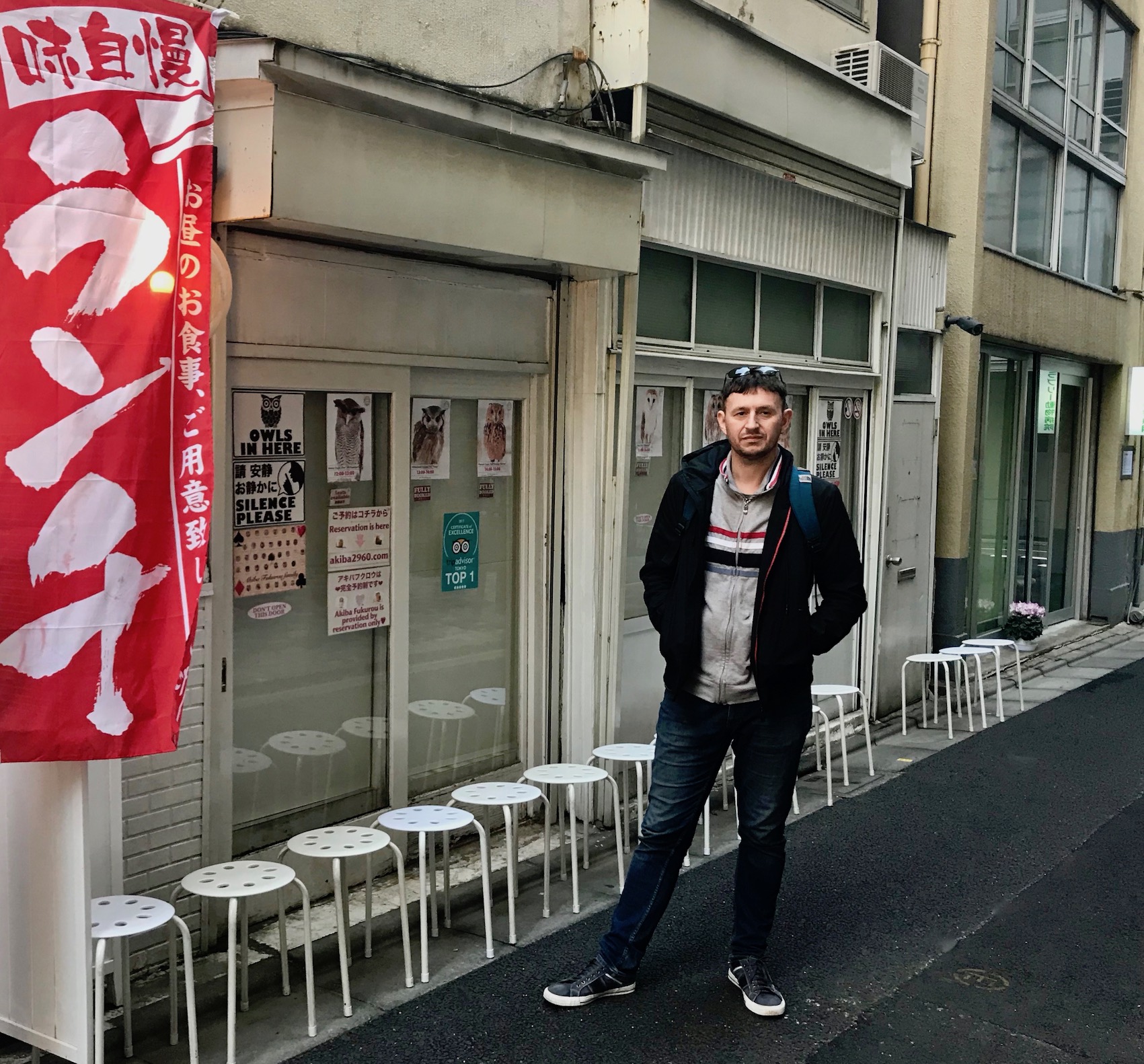 February 2019. Located in an unassuming side street away from the squawking (unintentional pun) chaos of Akihabara’s arcades and anime stores, Akiba Fukurou Owl Café immediately struck me as an island of calm. A visit here can be made exclusively by reservation, while the doors only open directly before each pre-booked hourly appointment. Communication is initially done through their website and then by email. Our reserved slot was 13:00 so, as per their instructions, this is where we patiently waited on the provided stools fifteen minutes or so before showtime. At 12:50 on the button the main door silently swung open and out came a smiling woman dressed in white trousers, waistcoat and fedora, a cute little black and white bow tie completing the look. Seriously, she could have been the new keyboardist in Mumford & Sons. Checking our reservation, she asked us to read a guide on how to behave in the café before signing a disclaimer saying they weren’t responsible if the owls went medieval on our asses. 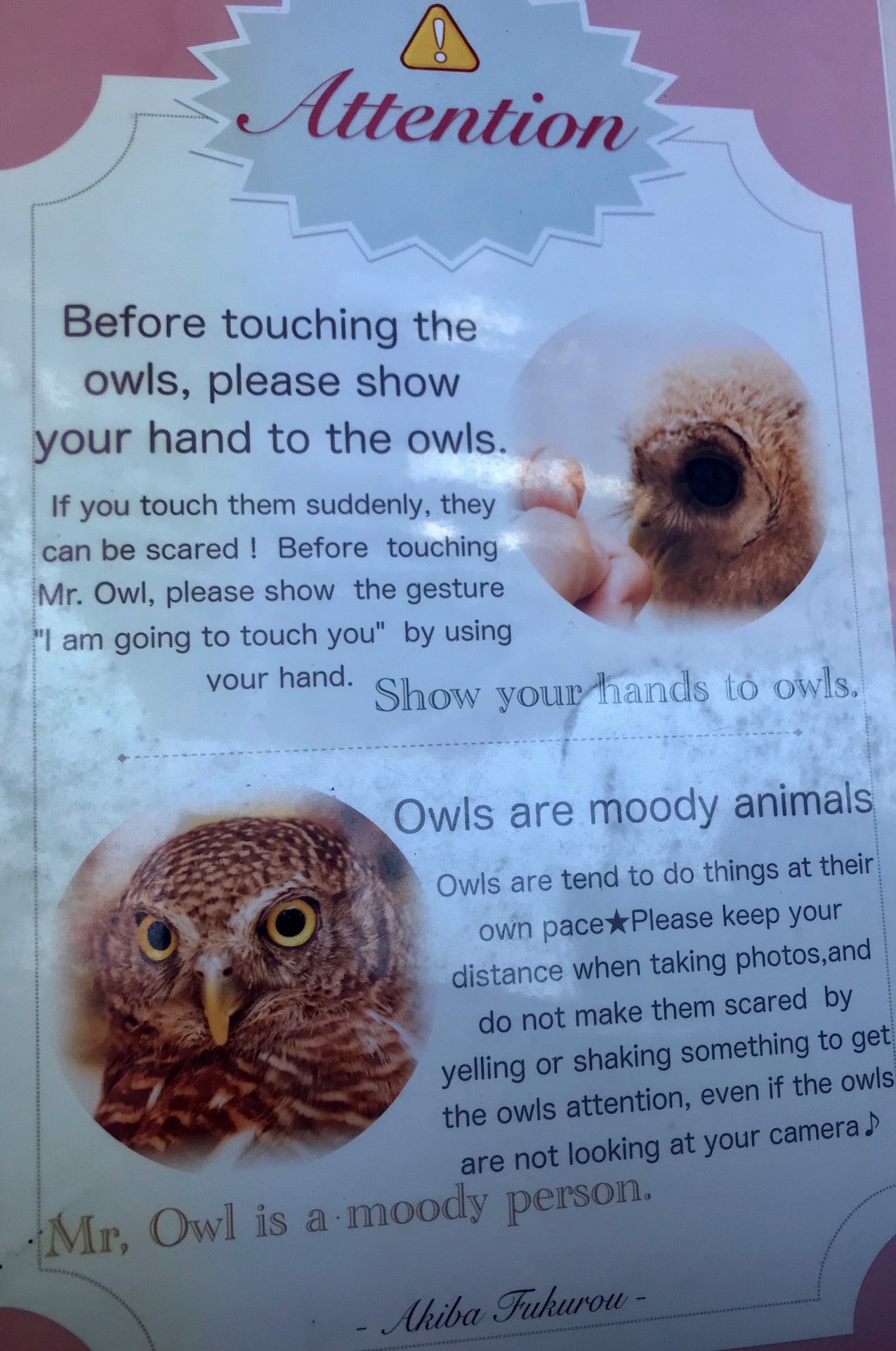 Flipping through their brochure, we learned about the importance of keeping our movements slow and measured and that oral communication should be reduced as much as possible. We could take pictures but no flash, while we should also understand that the owls could and probably would crap on us at any given moment. A lot of things to consider then, but of course it was a sign that these guys actually care about their owls. 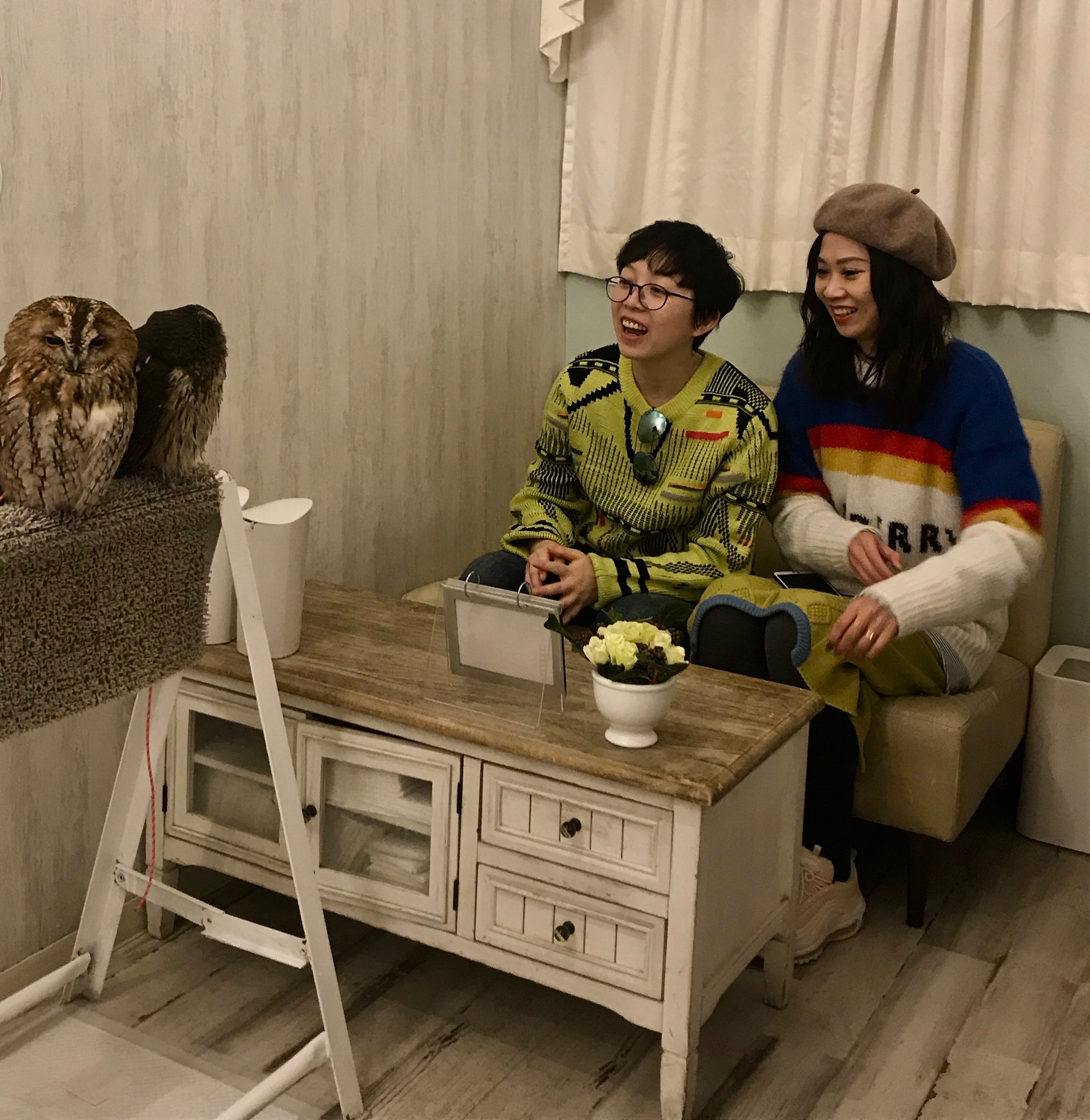 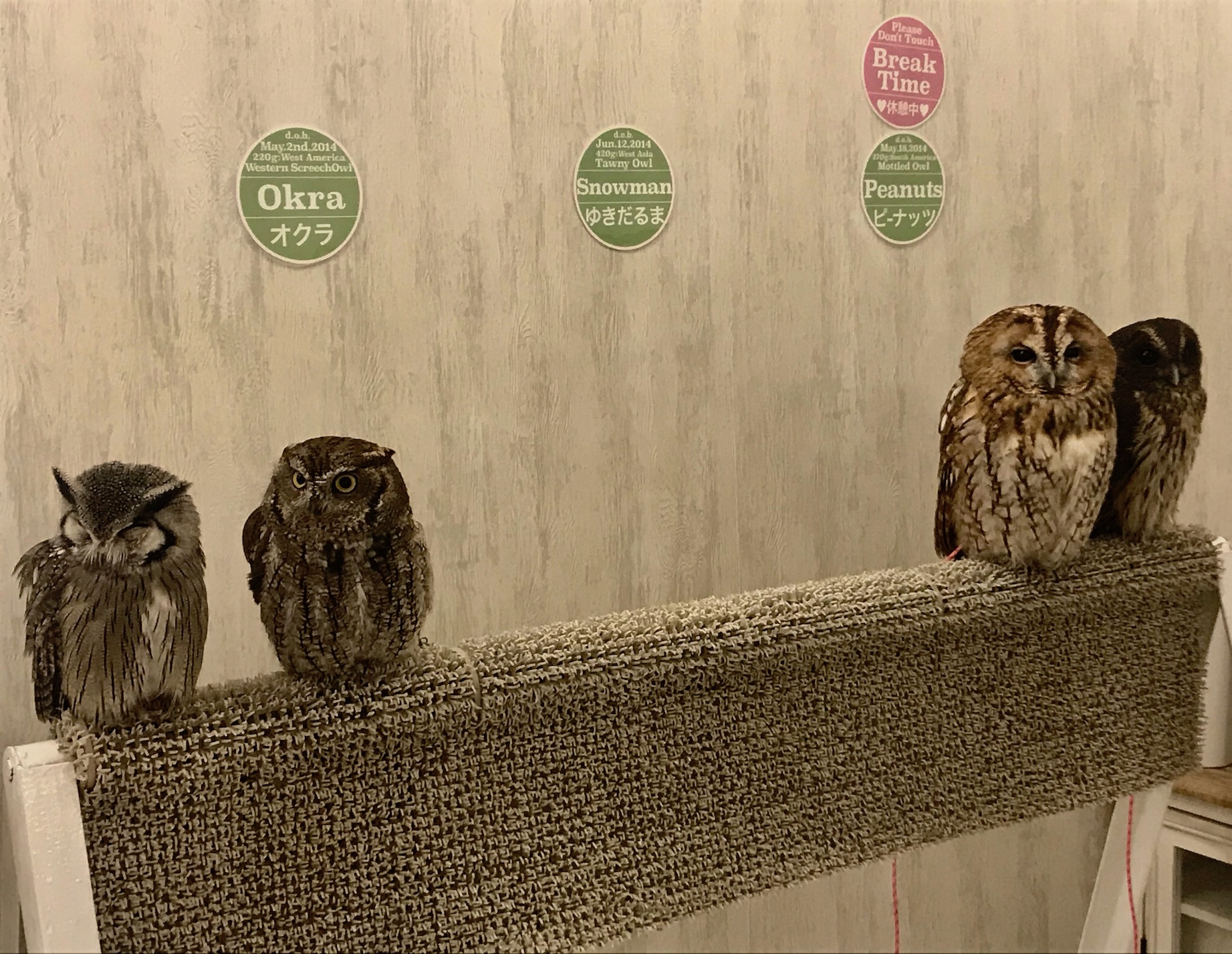 February 2019. There were about twelve of us for the 13:00-14:00 slot that day as we filed inside to the sound of soft, classical music. And there were more than a few low gasps from across the group at the scene that met us. The place was spotlessly clean and beautifully designed with owls everywhere. They were perched in various corners of the ceiling and spread out across wooden beams along the walls. Some of them were located next to the various table and chair setups and in and around a cosy sofa area. 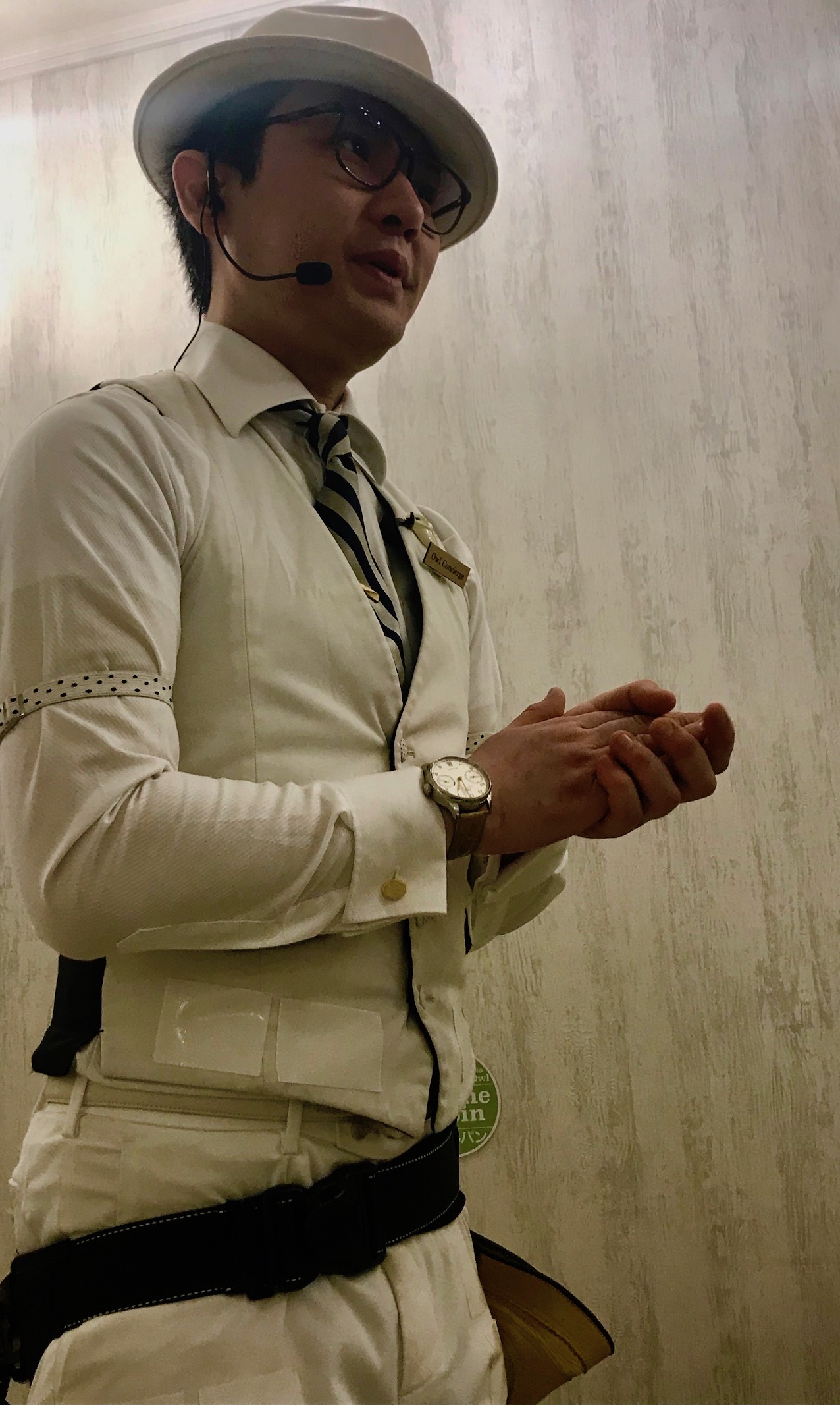 Tentatively settling into our various cliques, we were all greeted by Akiba Fukurou’s founder and all-round Owl enthusiast Shusaku Yasu, who gave us a brief overview of his owl empire. Opening in 2014, his vision was to create an owl haven where people could come and meet some of the rarest and most beautiful birds on the planet. 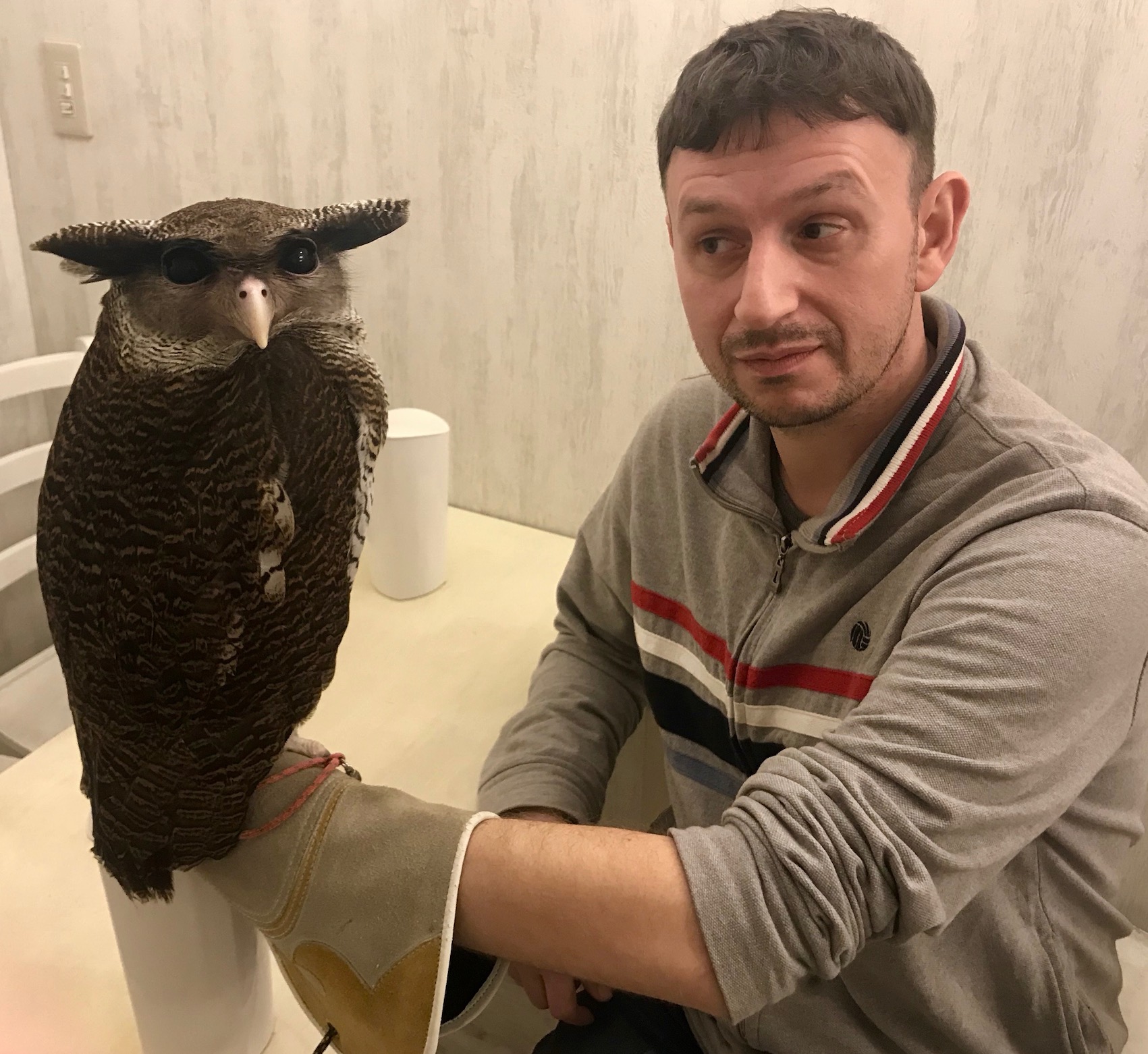 February 2019. Unlike the vast majority of Tokyo’s themed cafes there isn’t actually any food or drink on sale here, the focus is purely on the owls without the distraction of waiters moving back and forth and the unwelcome sound of clinking cups and spoons. Visitors here get to spend one-on-one time with two birds of their choice. First up I went for a Southeast Asian Malay Eagle Owl called Mr. President who actually reminded me a bit of Abraham Lincoln. He was pretty heavy and predominantly still, only occasionally shooting me a curious side-glance and responding with just a slight tilt of the head when I gently stroked the top of his head, just like the brochure suggested. Like all the owls here Mr. President lives on a diet of pink, frozen mice. 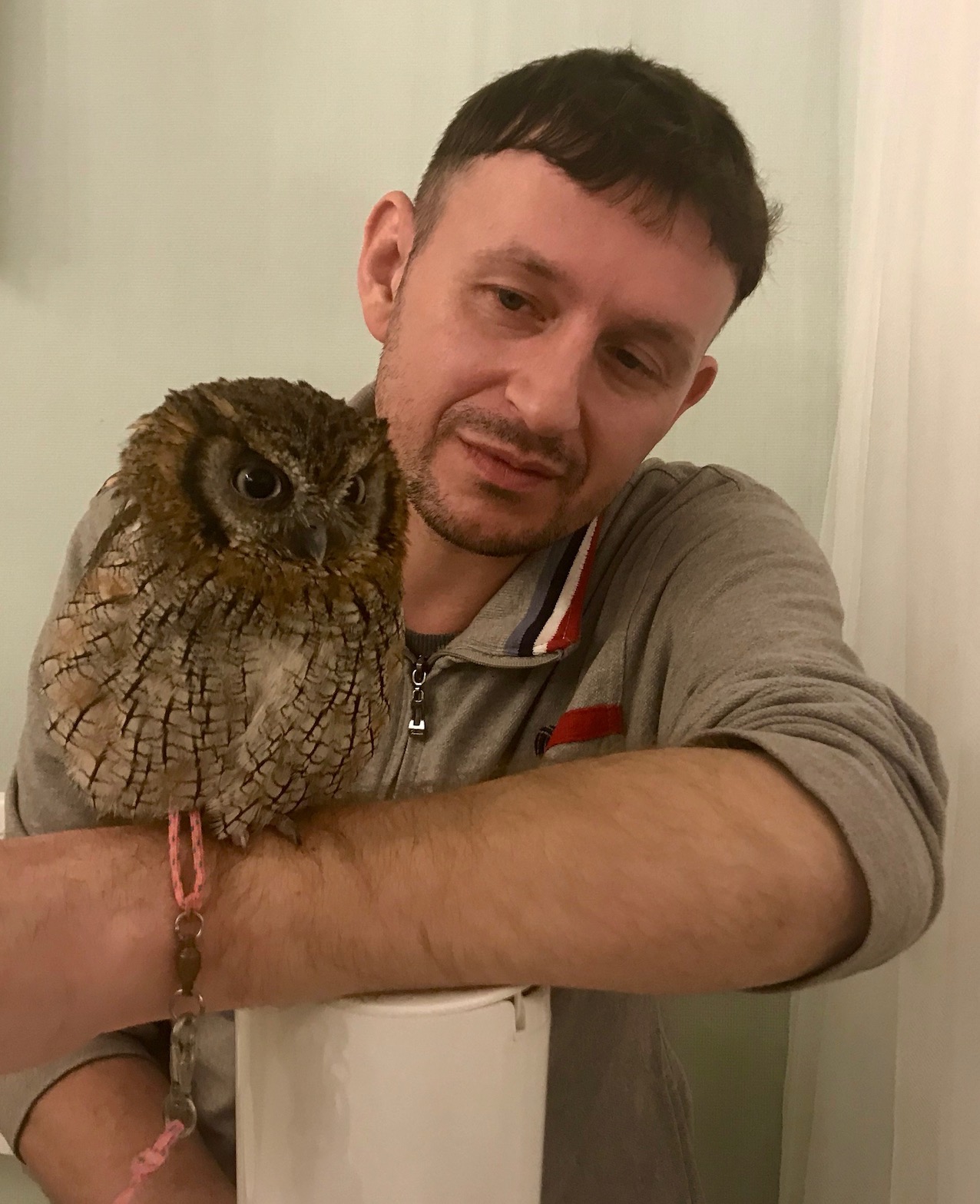 In the name of contrast my second choice was this little gal, a Central American Tropical Screech Owl called Squirrel. According to Akiba Fukurou’s official blurb, Squirrel has a Tsundere type personality, which is a Japanese anime term for a female character who is usually cold but becomes very clingy when she finds a lover. Squirrel obviously wasn’t attracted to me however, as she spent most of the time we had together carefully cleaning herself before taking a shit on my hand. Cute little owl though! 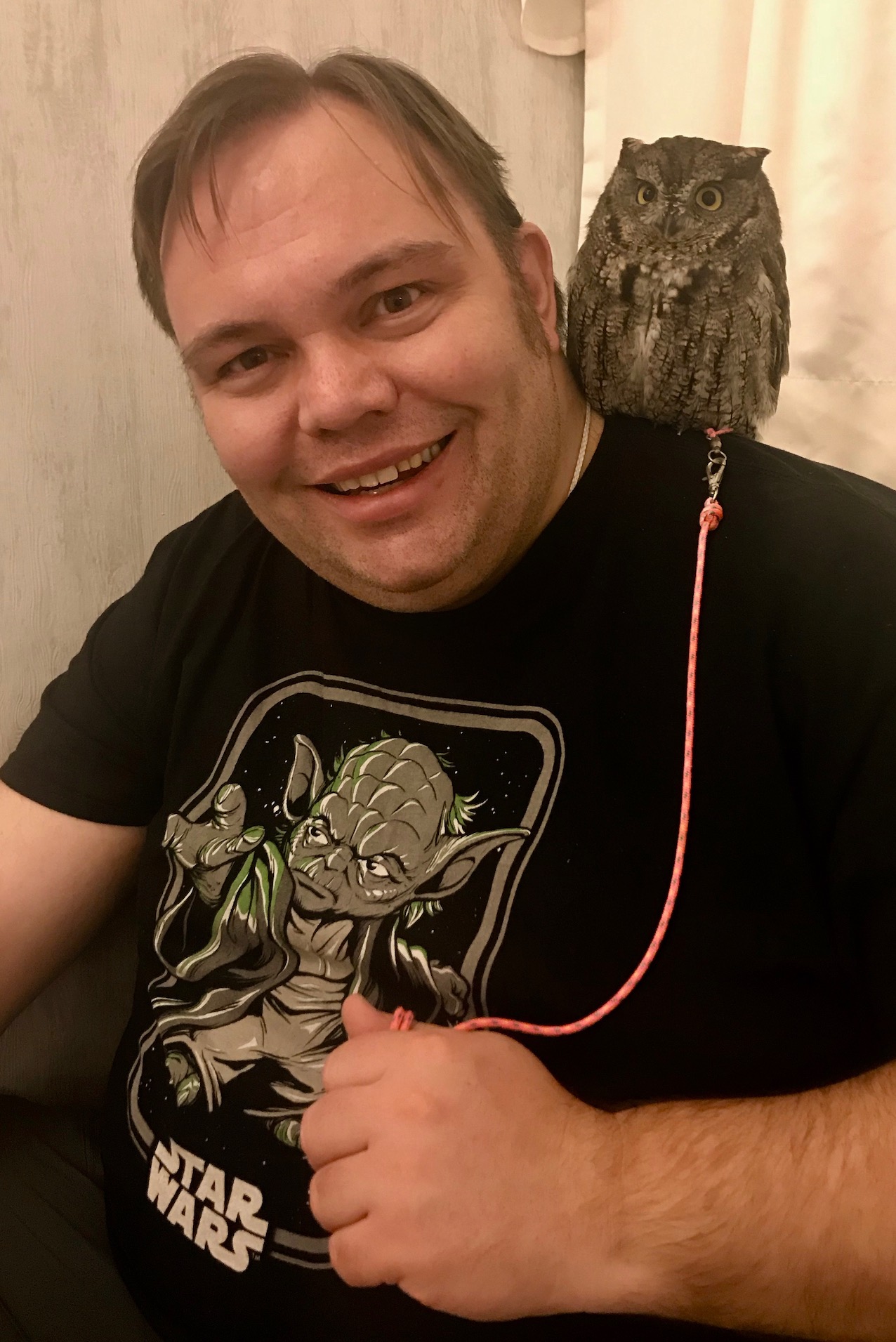 Wonderboy also had a great time meeting two of Akiba Fukurou’s amazing residents. His first choice was the playful Okra, a West American Screech Owl that happily hopped across his shoulder to nuzzle against one of his ears. He also got to grips with the gorgeous but anxious Wizard, a three year old Albino Barn Owl who seemed keen to get back up to his corner ceiling perch.

Akiba Fukurou Owl Cafe was a fantastic experience that’ll live long in the memory! Our one-hour stay here came at a cost of 2000JPY per person (£13.60/€15.90/$18.10), which included a complimentary printed photo of ourselves and one of our chosen owls. If you leave them an online review within a few days of your visit they’ll also send you the digital copy, which is what I used as this article’s feature image! Interested in coming to see the place for yourself? Check out their website for all the information and to see the full menu of available owls: http://akiba2960.com 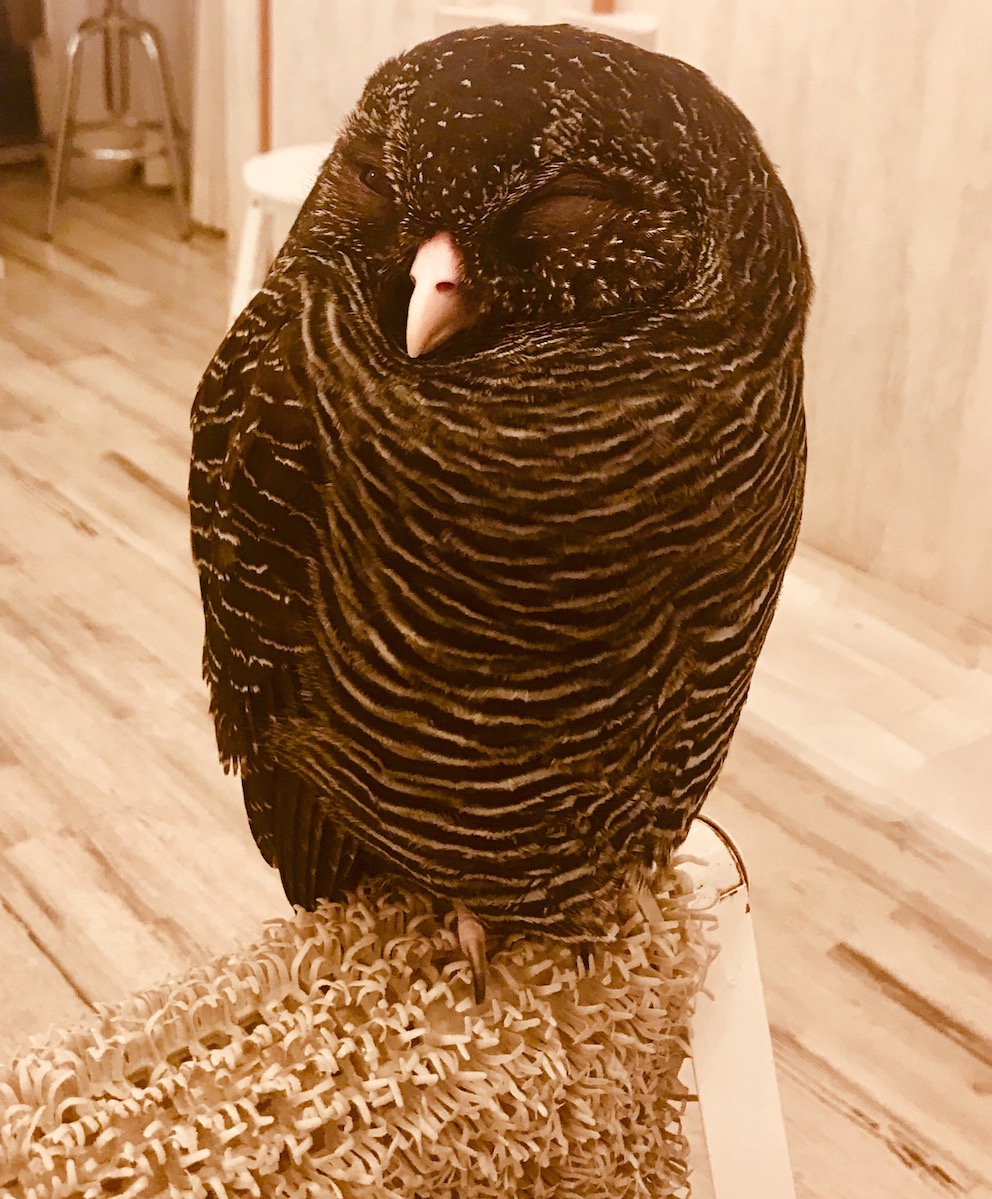