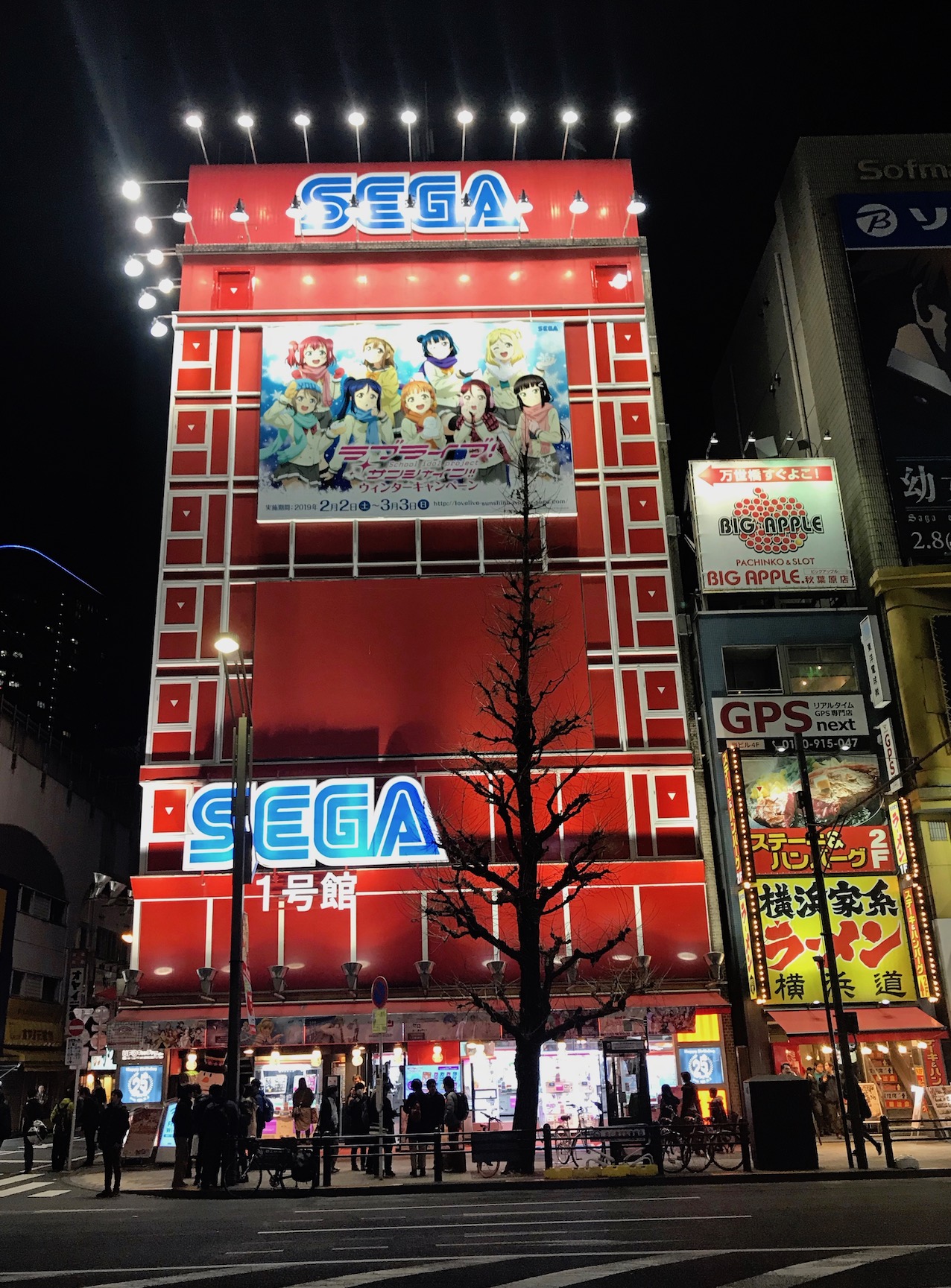 February 2019. Japan is world famous for its arcade culture and a night of video gaming in Tokyo’s Akihabara district is one of the quintessential experiences for visitors to the Japanese capital. Take even a cursory glance across Akihabara’s neon-lit skyline and you simply cannot miss the hulking, orange-colored Sega buildings, known locally as Sega Arcade 1, Sega Arcade 2 and Sega Arcade 3. And yes, they’re even numbered on the exterior so you know exactly where you are. Wonderboy and I headed into Sega 1 at 20:30 on a Saturday night, keen to see what brand of craziness lay within. 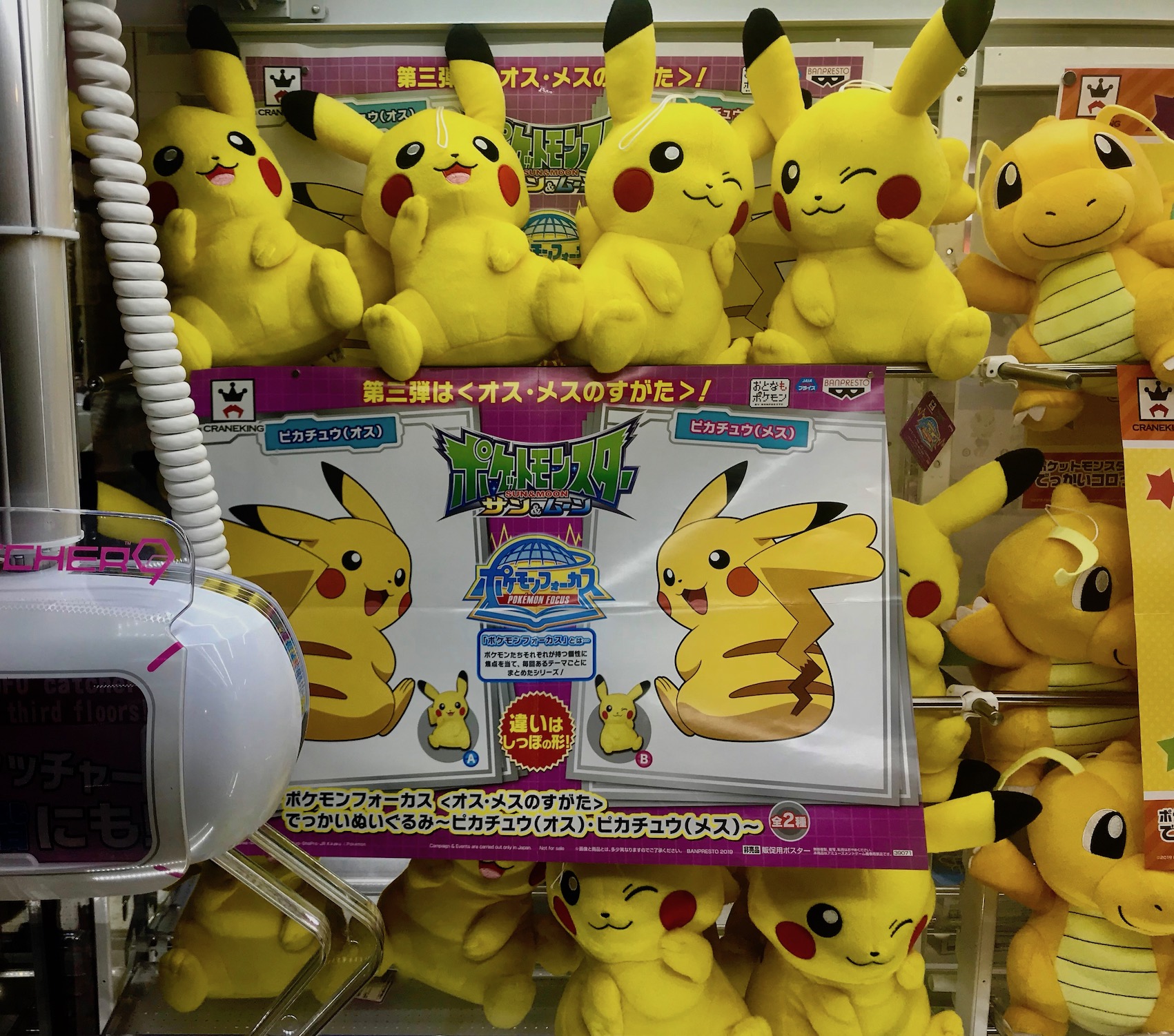 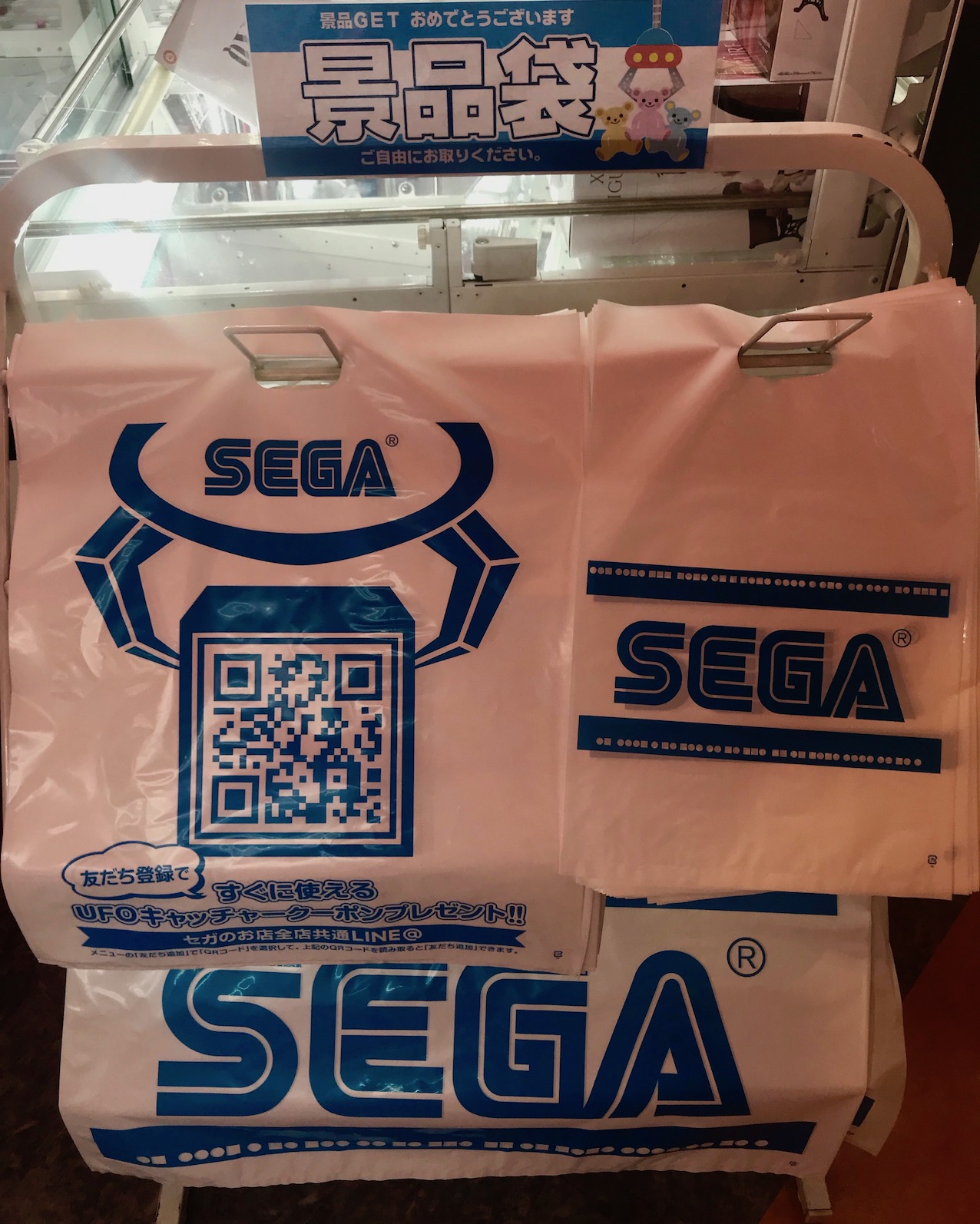 February 2019. Sega 1 Arcade is spread out across six massive floors. We’d been expecting to walk straight into the mayhem but actually the 1st floor, with its rows of toy-grabbing UFO catchers, stood largely deserted. So we had a quick look, grabbed a free Sega bag and headed up to the third floor. 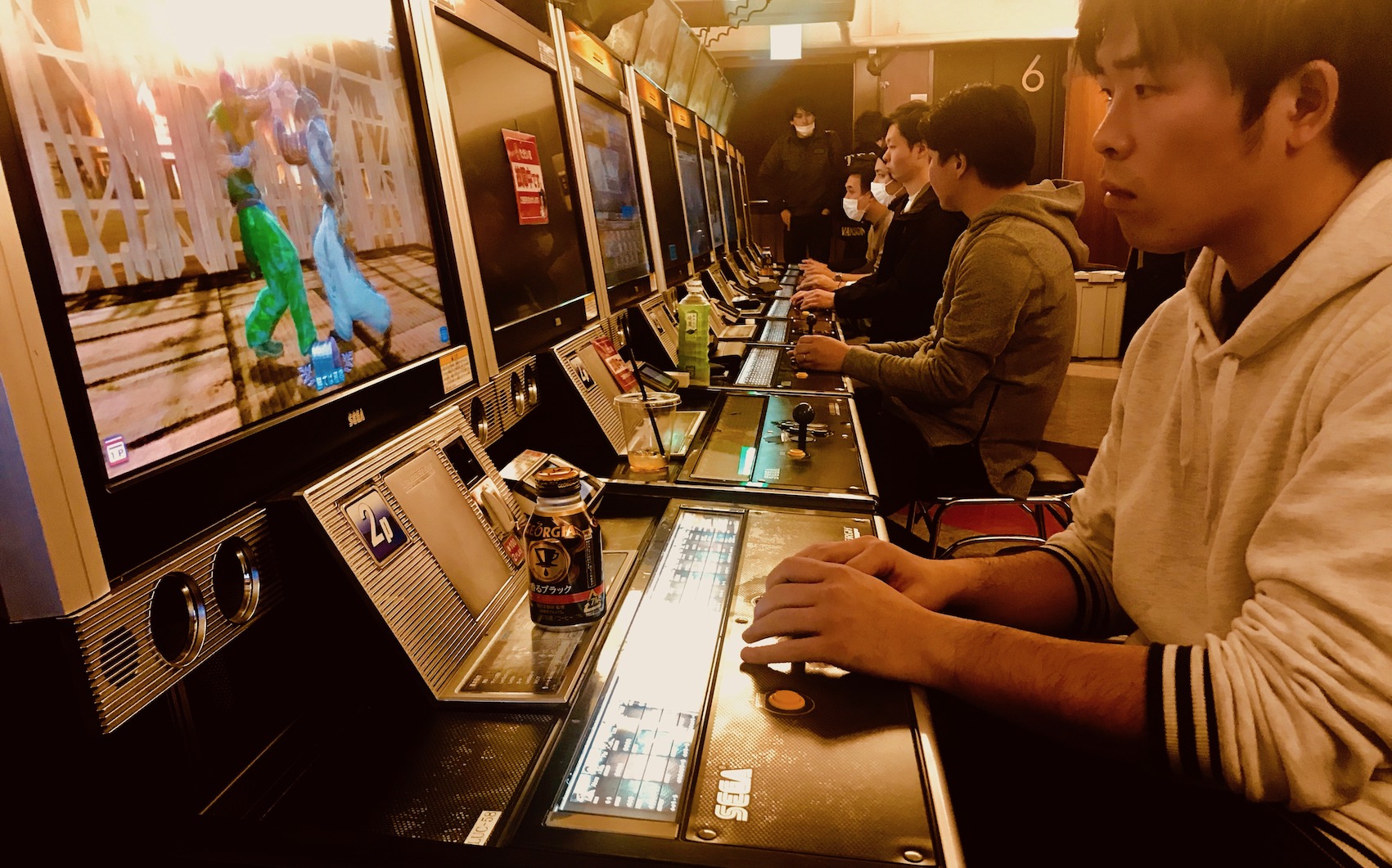 The third floor was much more action-packed with its frenetic aisles dedicated to Virtua Fighter 5: Final Showdown. It really was a sight to behold, the air filled with the rat-a-tat-tatting of punched buttons as the exclusively male gaggle of chain-smoking gamers battled each other out. It’s just 100JPY (£0.70/€0.80/$0.90) a shot and the more dedicated players had piles of coins stacked up on the counter, clearly anticipating a long night ahead. 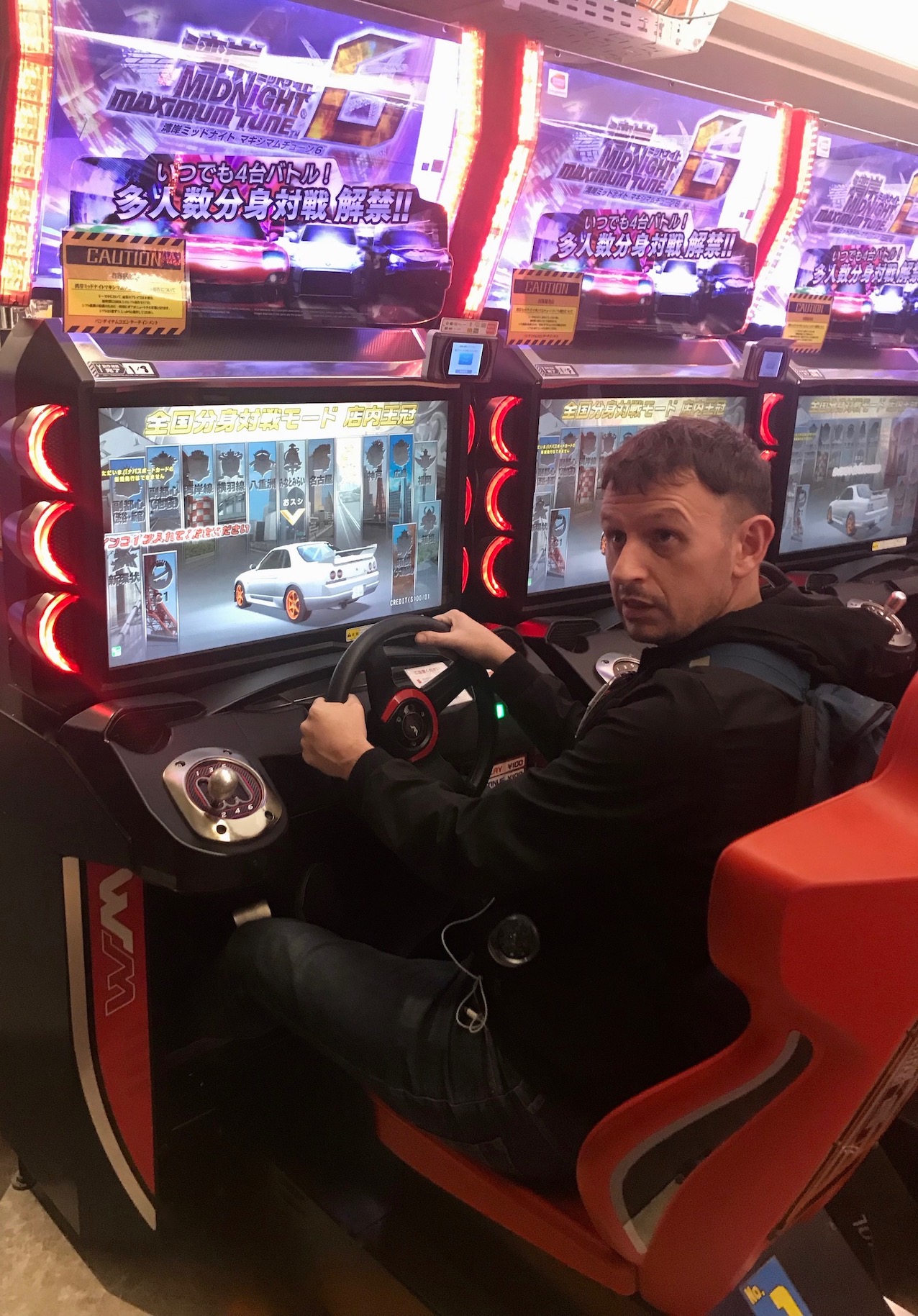 February 2019. Up on Sega 1 Arcade’s 4th floor and Wonderboy finally convinced me to segue from spectator to player. So we went head to head in the racing car game Midnight Maximum Tune 6, adapted from the popular Japanese manga series Wangan Midnight. I’ve always been spectacularly crap at racing games but somehow, in our first head-to-head, I managed to beat Wonderboy!!! But then he got his own back in the second race to level the score. 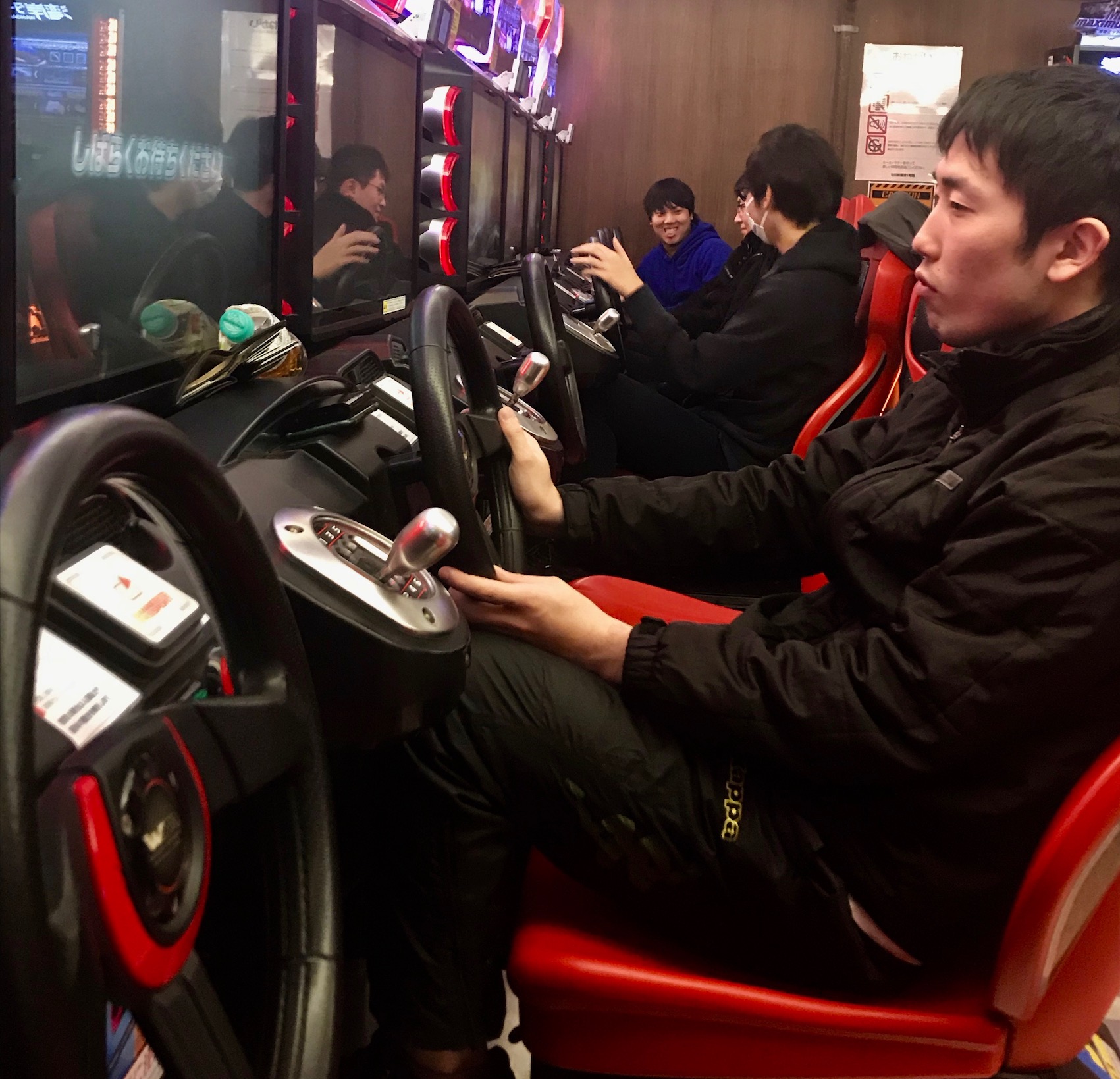 For the decider our private contest was totally gatecrashed by the arrival of a bunch of Japanese dudes who clearly knew their way around the track. Joining our race, they proceeded to demolish us so badly it rendered our own competition irrelevant.

February 2019. Elsewhere I was entranced to watch the amazing Taiko no Tatsujin Japanese drum game in action. It’s all about hitting the drums to the rythmn while following the note system onscreen. Different colors represent different ways of hitting the drum and there are three levels: easy, normal and difficult.

Even more hypnotic is the baffling Maimai Finale, a rhythm game where glove-wearing players interact with fast-moving shapes and objects whilst performing dance-like moves. You can tap, hold, smash or slide depending on the note, while the system itself looks like some form of deranged washing machine. The whole thing seems to be quite a workout, god knows I felt knackered just watching it. 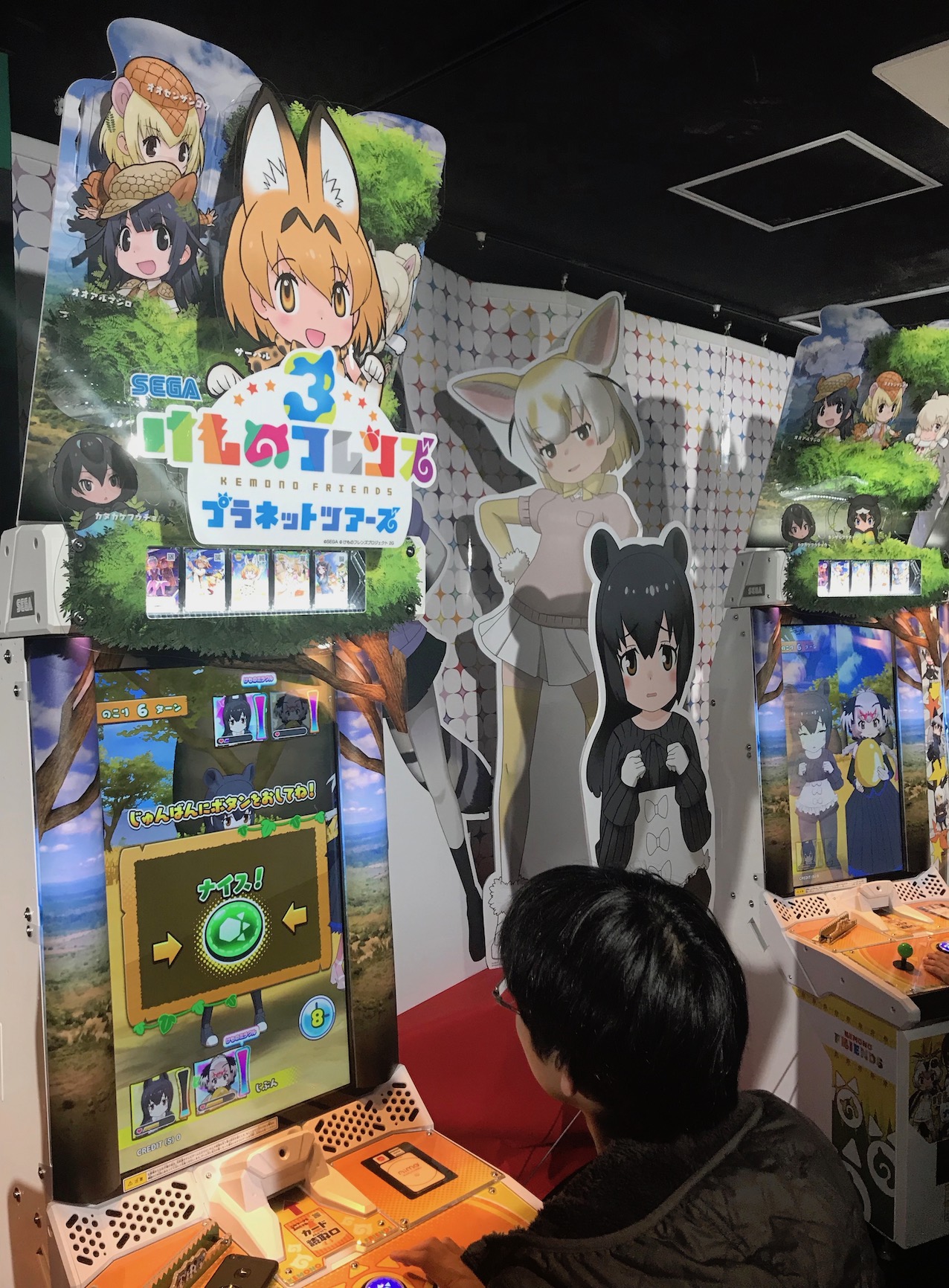 February 2019. Having deduced that Sega 1 Arcade was a somewhat classic gaming centre, we decided to nip down the road and check out Sega 3. Once again it turned out to be a colossal multi-floor space, but with a much wider range of styles, including lots of shooters. Wonderboy spent some time fighting zombies with a machine gun on The House of the Dead 4 and there was a long line of expectant hopefuls waiting to try and review the latest release of a popular anime game called Kemono Friends.

I was also impressed by the amazing soccer simulator WCCF Footista that adds a cool twist to the standard football game format. Basically gamers build a team using collectible smart cards, produced by Panini. You can use the cards as you play matches by placing them on a matted table. All players’ statistics are pulled and constantly updated by the database as you tweak tactics, make substitutions, buy and sell etc. Such a cool idea and hugely successful by the sounds of it as so far they’ve flogged over 850 million cards!