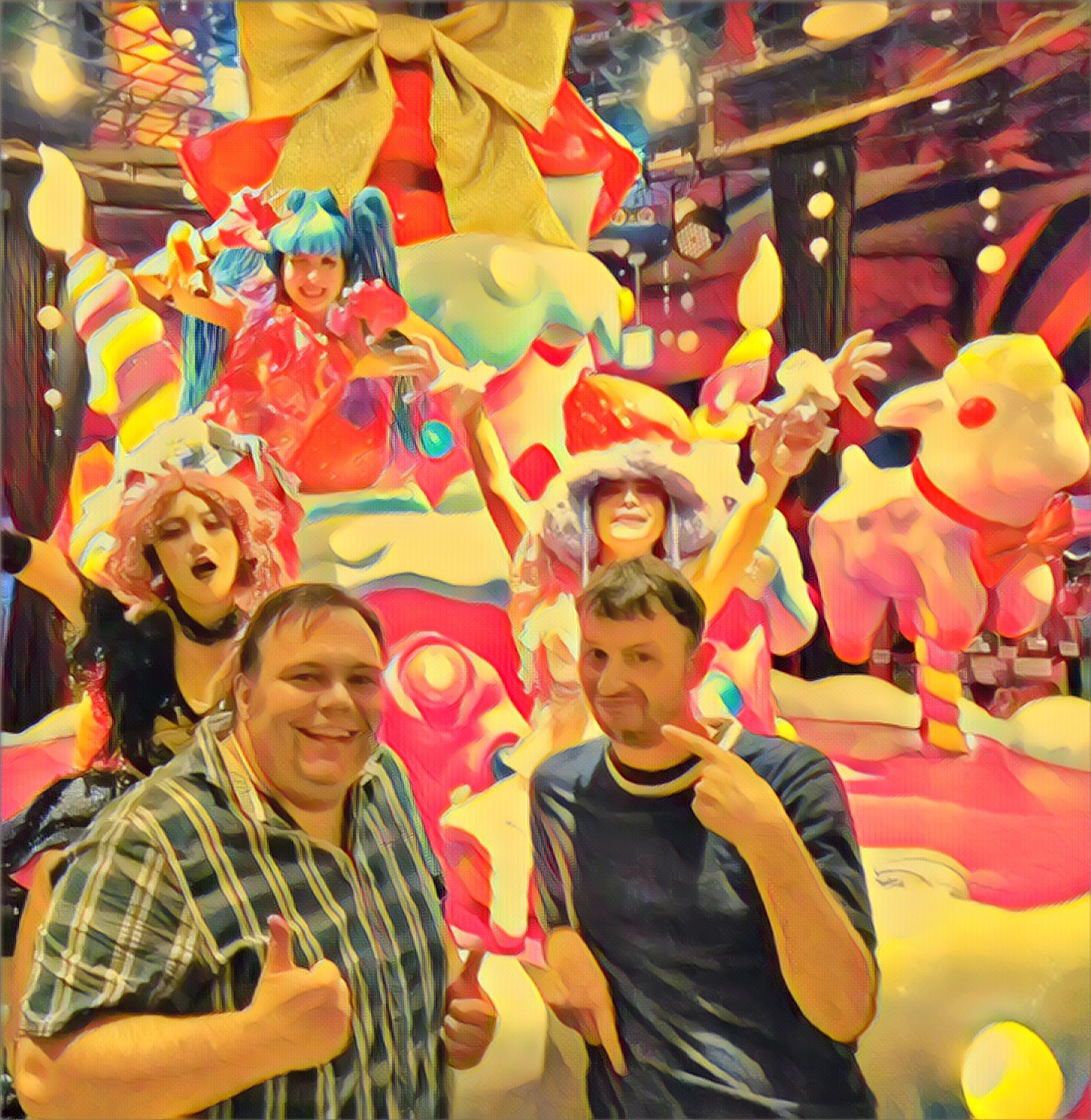 February 2019. Another morning in the Japanese capital another amazing, only-in-Tokyo themed café breakfast. This time Wonderboy and I had arrived at The Kawaii Monster Café in the city’s Harajuku district. At reception we were warmly welcomed (Konnichiwaaaaaaaaaaa!!!!) by two giggly women dressed like extras from Tim Burton’s Alice In Wonderland. Behind them, on a blood-red back wall, sits a giant, wonky bulging eyeball. “I sheeee youuu!” it slurs. 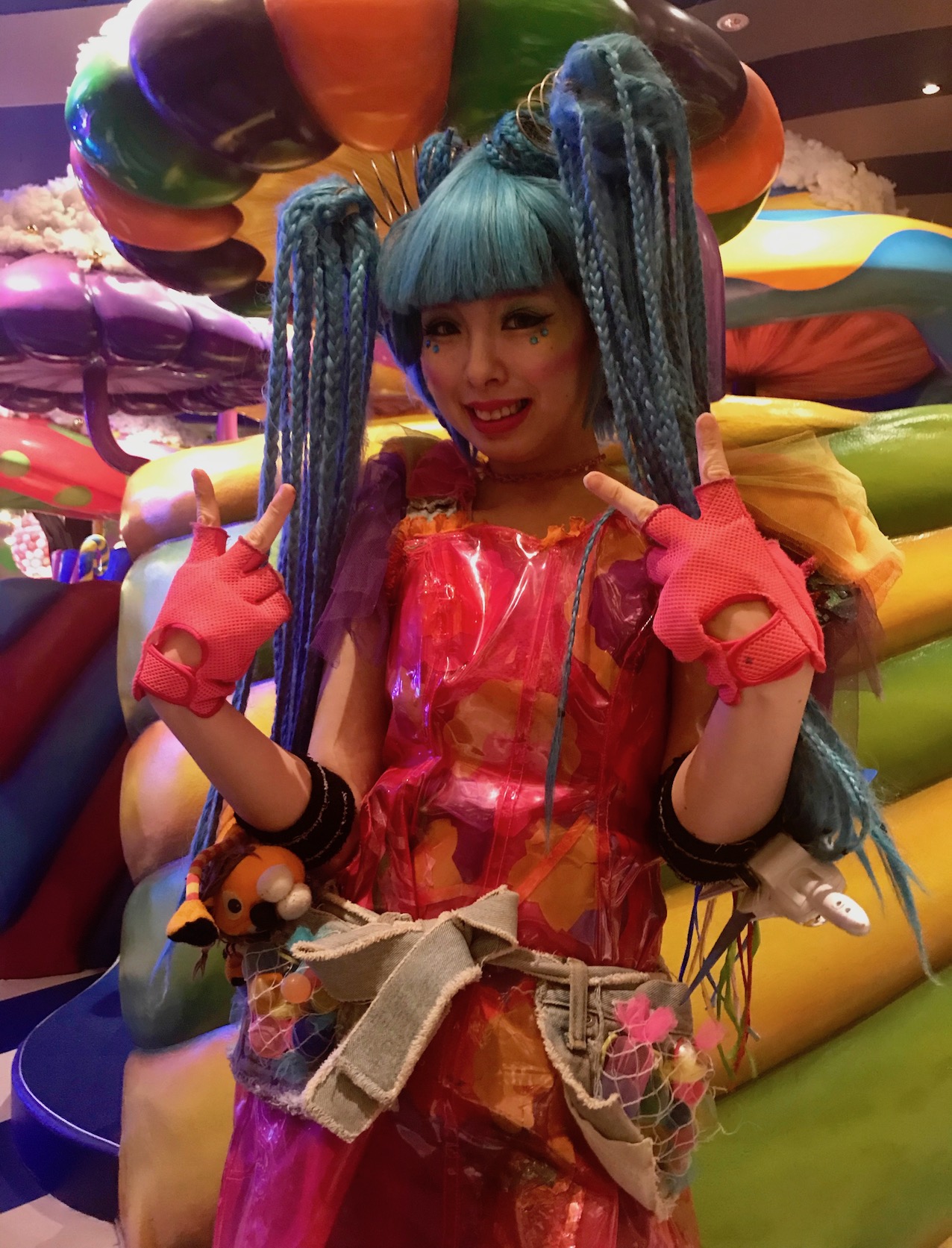 “Welcome to the Monster Cafe!!!” With ‘Candy’ the hostess.

February 2019. And then we were walking through the main doors into what I can only describe as a psychedelic visual overload of twisting, submerging shapes and colors. As I attempted to take it all in we were picked up by a hostess called Candy, an excitable, blue-haired, pigtailed cartoon of a woman dressed in… well I don’t know… it looked like an attempt at modern art augmented by pink biker gloves and a crème waistband from which dangled toys, balloons, colored balls and god knows what else. She seemed over-the-fucking-moon to see us, her grin so damn wide I thought it might crack her face in half. 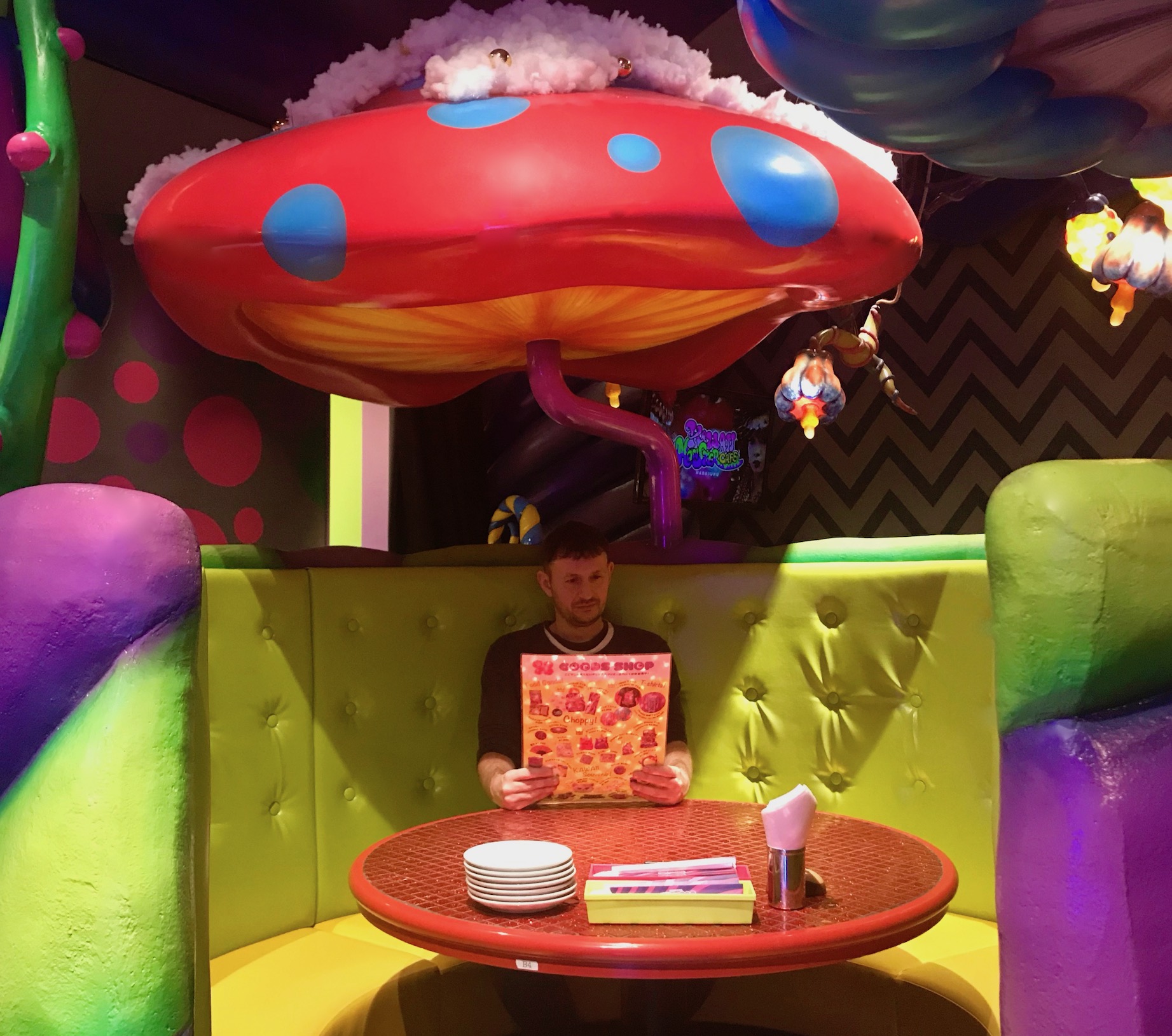 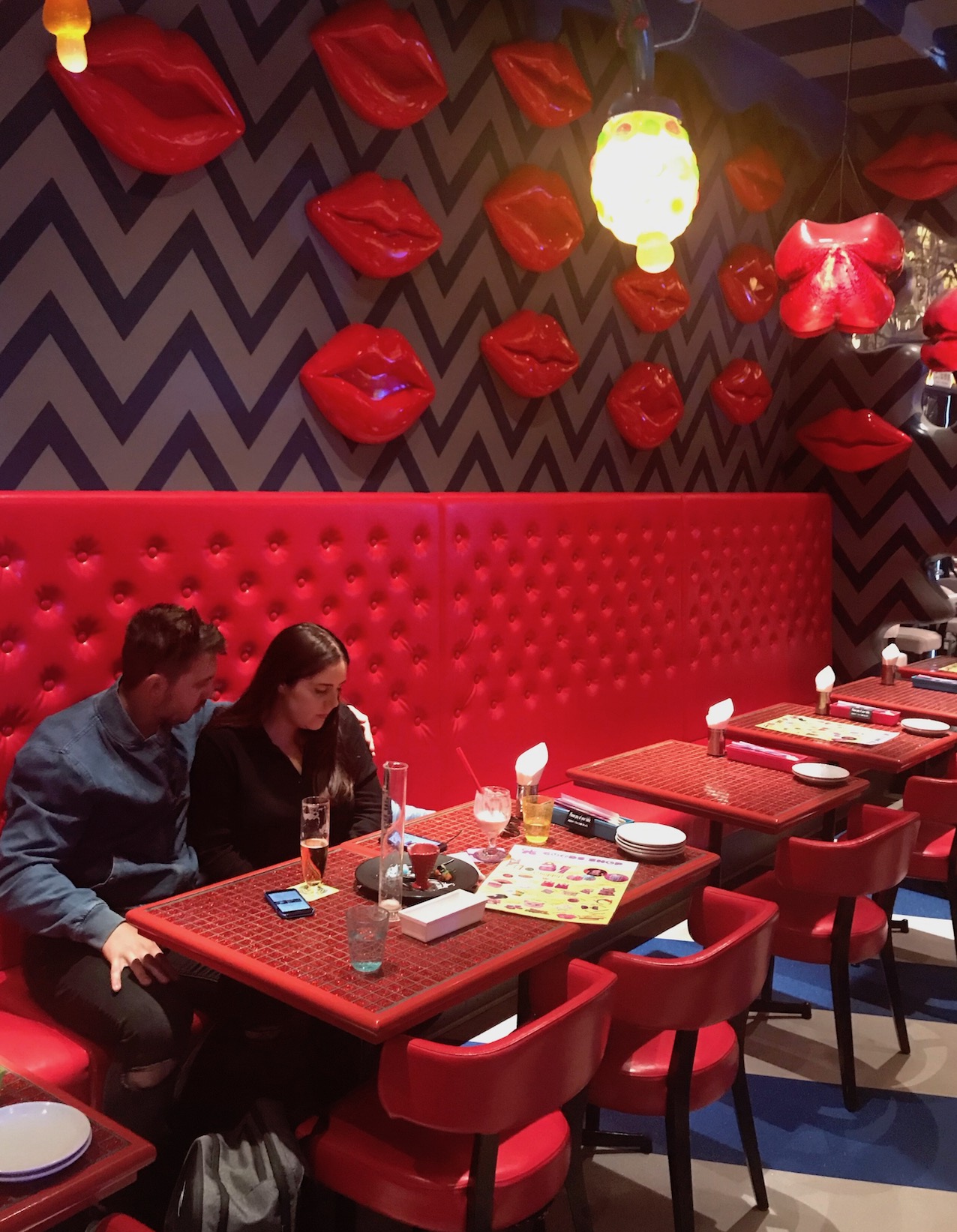 The walk to our table, (soundtracked by manic Japanese pop rock and the hostess’ non-stop chatter), pretty much served as an informal tour of the cafe. Among the many highlights…. a section of marshmallow-shaped, mushroom-parasol-fitted diner booths and a leather-seat-lined back wall with giant, swollen, wall-mounted red lips: mwah! 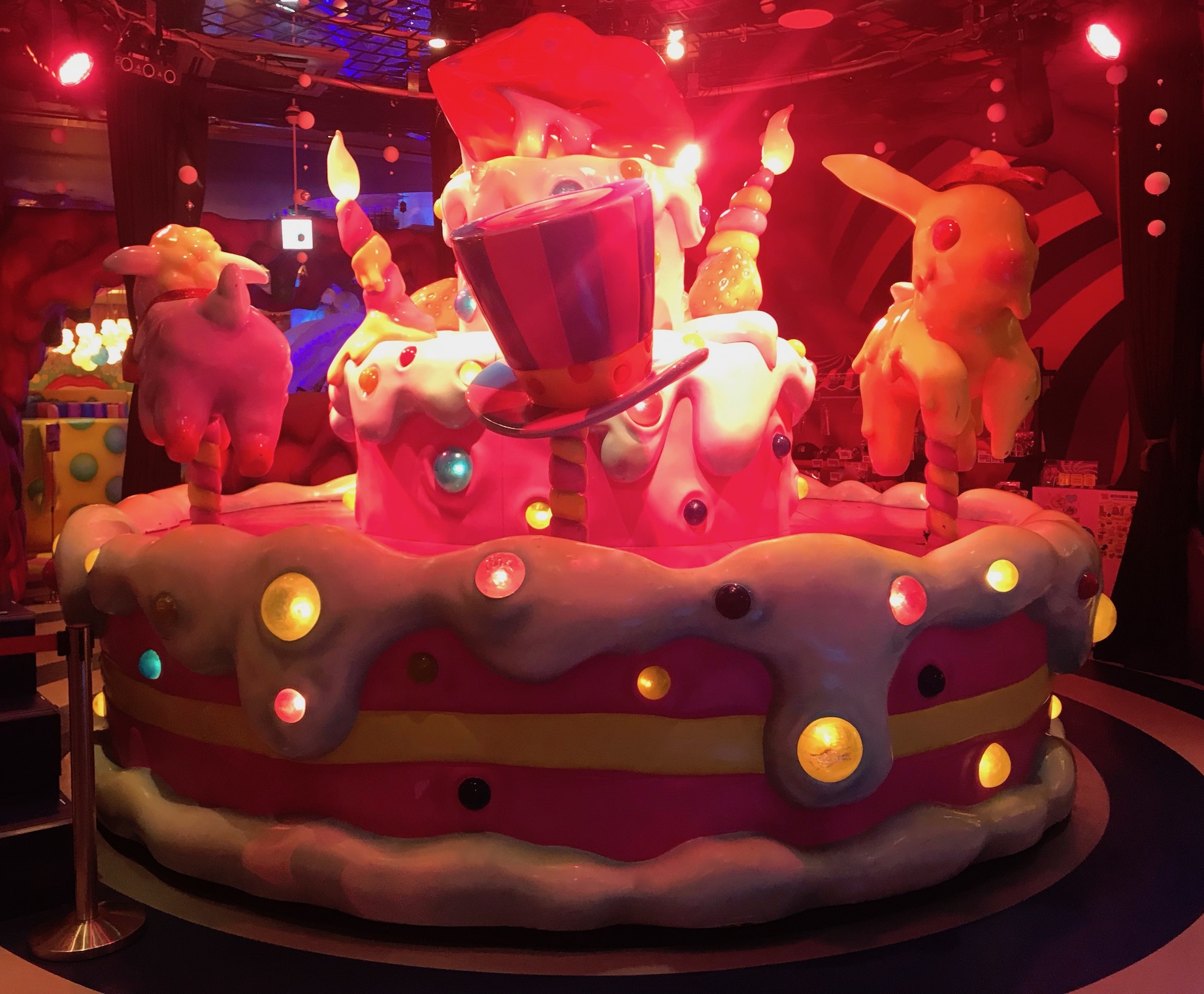 The-Sweets-Go-Round: Kawaii Monster Cafe. Because they could.

And then there’s The Monster Café’s mental centerpiece, a massive cake-shaped performance stage called Sweets-go-round fitted with Dali-esque candles, multi-colored lights and a handful of pokemon-like creatures seemingly brought back from the dead via the pet cemetery. At this point you’d be forgiven for asking: Where are the actual monsters? But actually a monster-inhabited cafe isn’t the setup at all! Rather, its creators have imagined the city of Tokyo, with its ever-changing fashion and social trends, as an almighty monster, and the cafe as its fearsome, gurgling stomach. How about that? 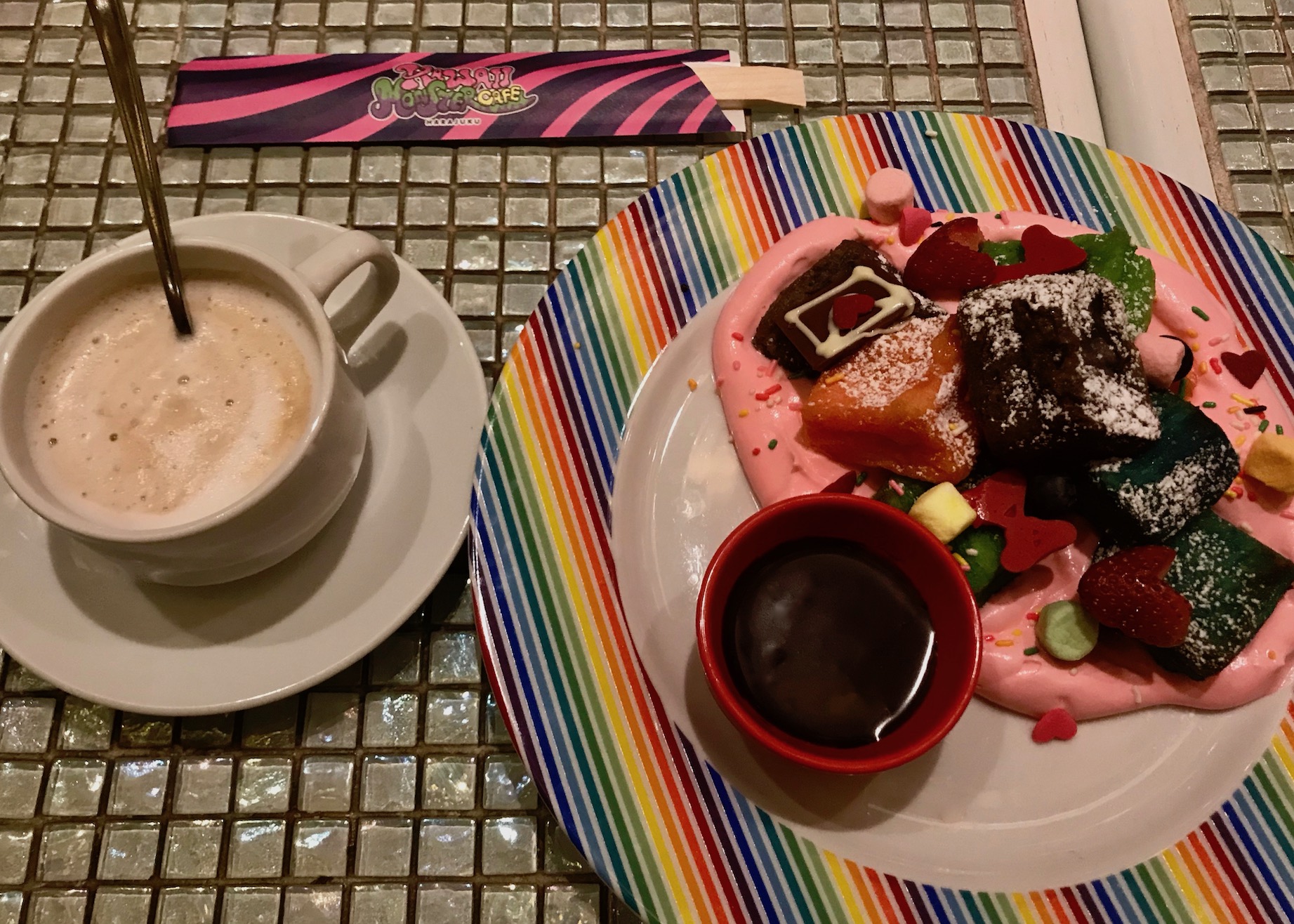 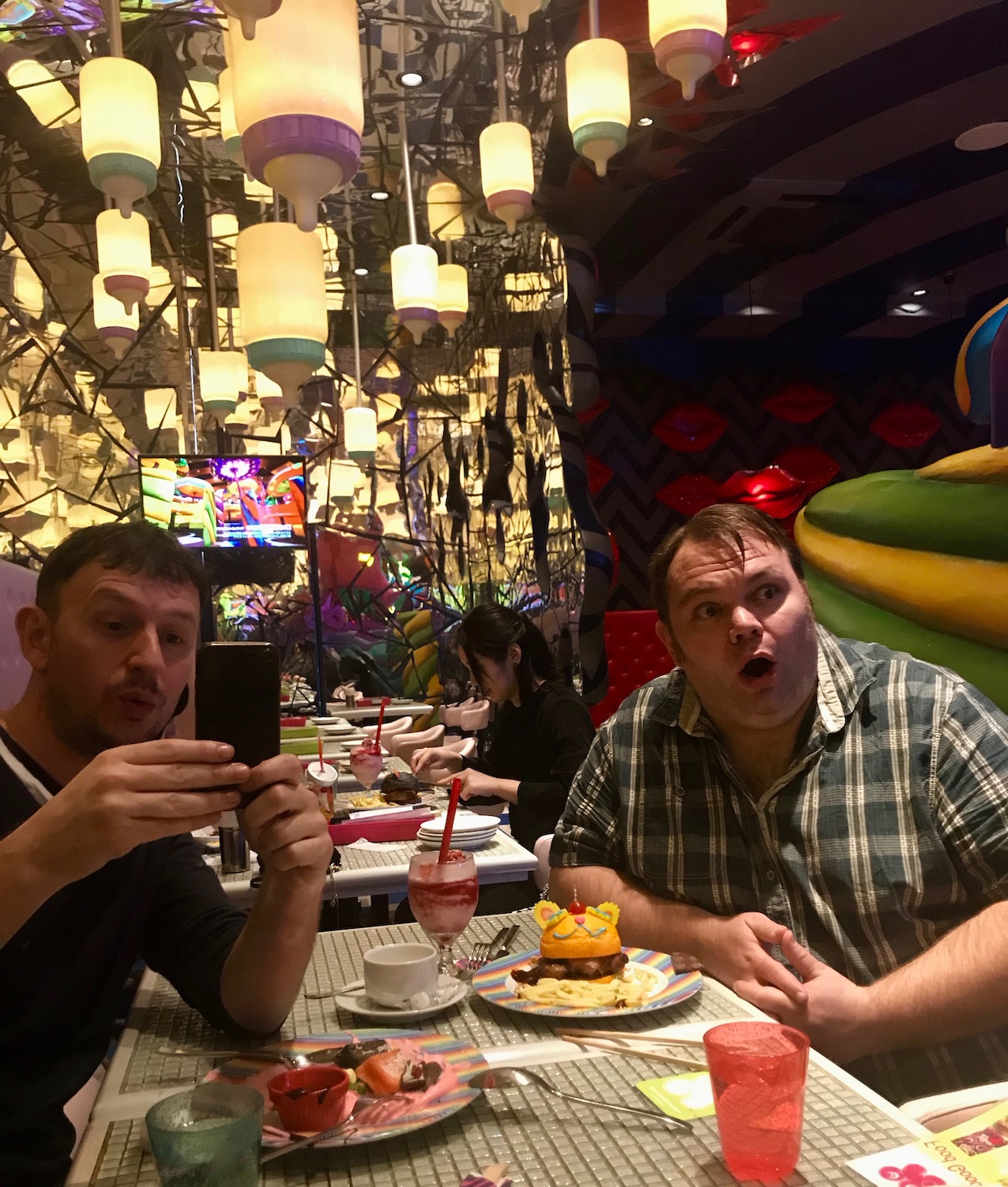 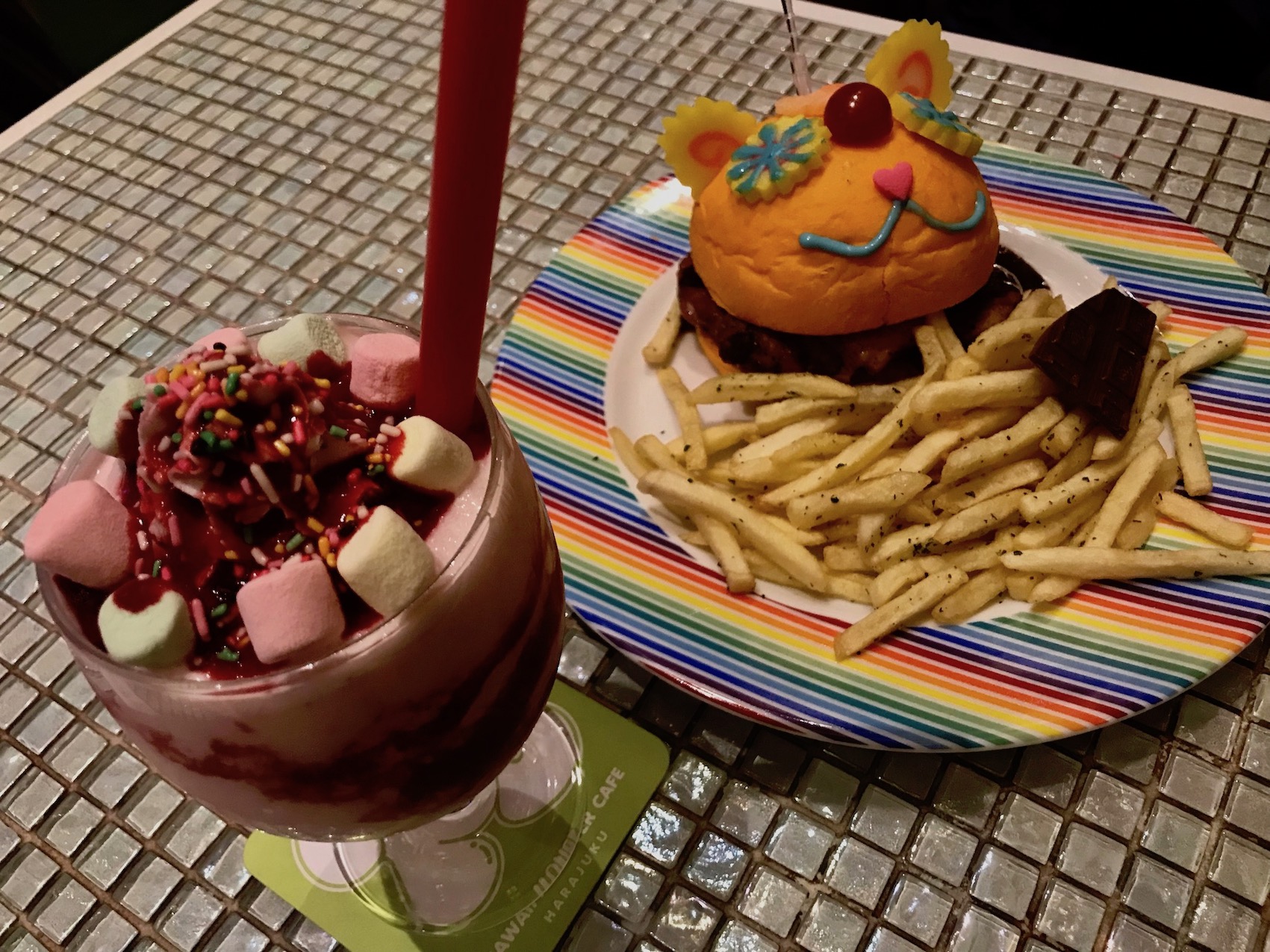 February 2019. There’s literally zero respite from Kawaii Monster Café’s zany onslaught and that includes the menu. Be prepared for some wacky dishes, many of which have been as lavishly designed as the café itself. I went for the so-called French toast with strawberry Angel Delight style mousse, while Wonderboy opted for the Chocolate Chicken Burger, which came served with an actual slab of chocolate dumped on top of the fries. Their milkshakes are also a sight for sore eyes, a large gooey swamp of ice cream, marshmallows, various bits of candy and a generous dollop of hundreds and thousands.

February 2019. We’d just polished off the last scraps when –BOOM!– suddenly it was show time and Kawaii Monster Café momentarily plunged into darkness. Instinctively people jumped up from their seats and headed eagerly towards the sweets-go-round. The three hostesses had already gathered onstage and were zealously grinding away to the spiky guitar rock disco that rapidly began engulfing us all. Listen out for the sound of the gurgling stomach too and its sinister laughter which seemed to suggest we’d all been consumed along the way. I had no idea what this madness was all about but nevertheless I was utterly spellbound.

Those girls put in a hell of a performance, especially considering they have to do this crap day in, day out. Jumping, running, jiving, hopping, skipping and gyrating themselves all over the place, their Kawaii Monster Café show was hilarious, fascinating, bewildering and… I’m not ashamed to say… more than a little sexy. I couldn’t take my eyes off the girl in black, who referred to herself as Nasty. And she turned out to be a good sport by agreeing to pose with me for a photo. Sigh, what a fanboy. 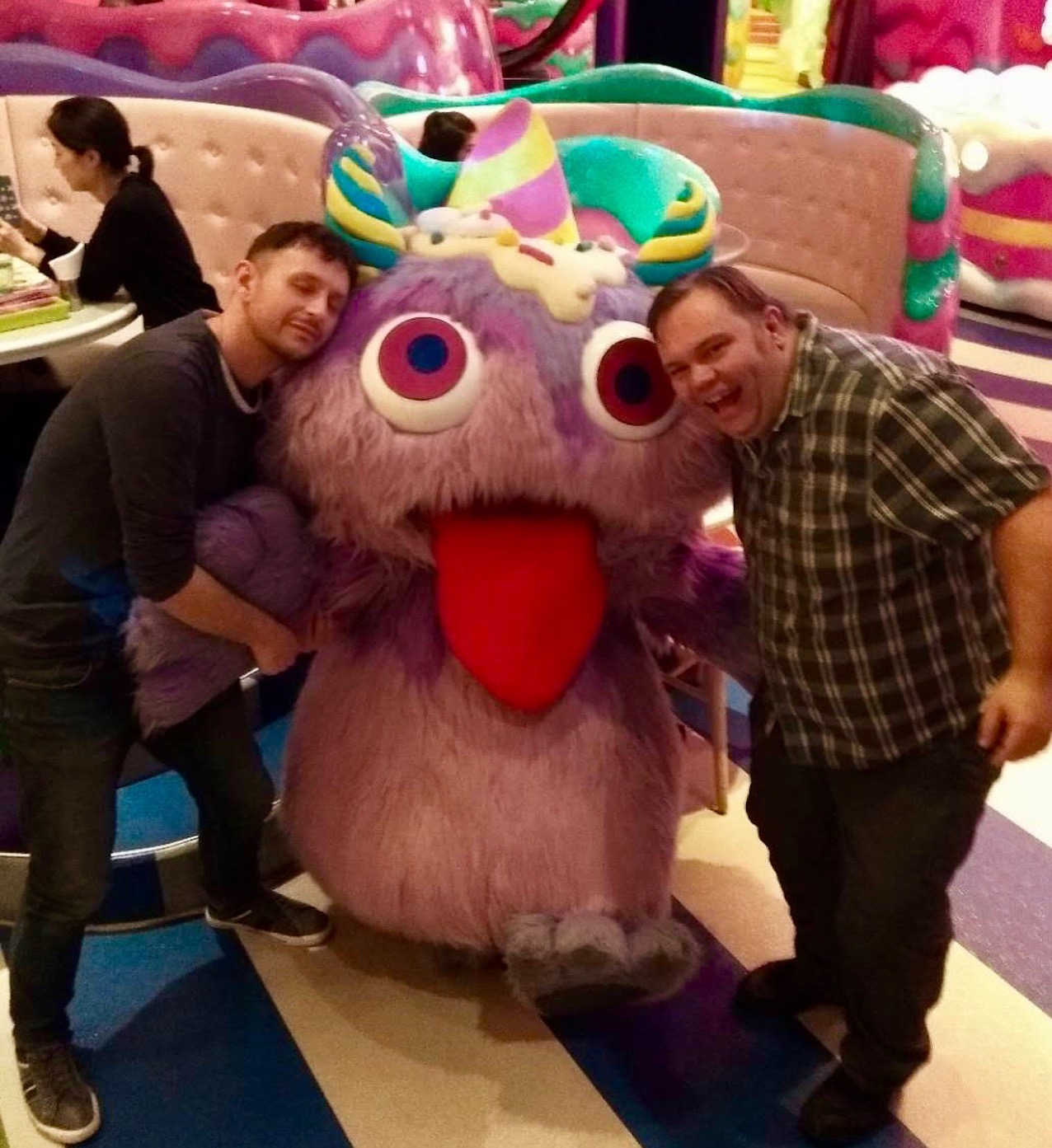 February 2019. It’d been a highly memorable visit to Kawaii Monster Café and we were just getting ready to go when, quite unexpectedly, we got to see a bona-fide monster after all! The house beast is a fluffy, purple, googly-eyed fella who bounced about greeting all the customers like a hyena on acid. 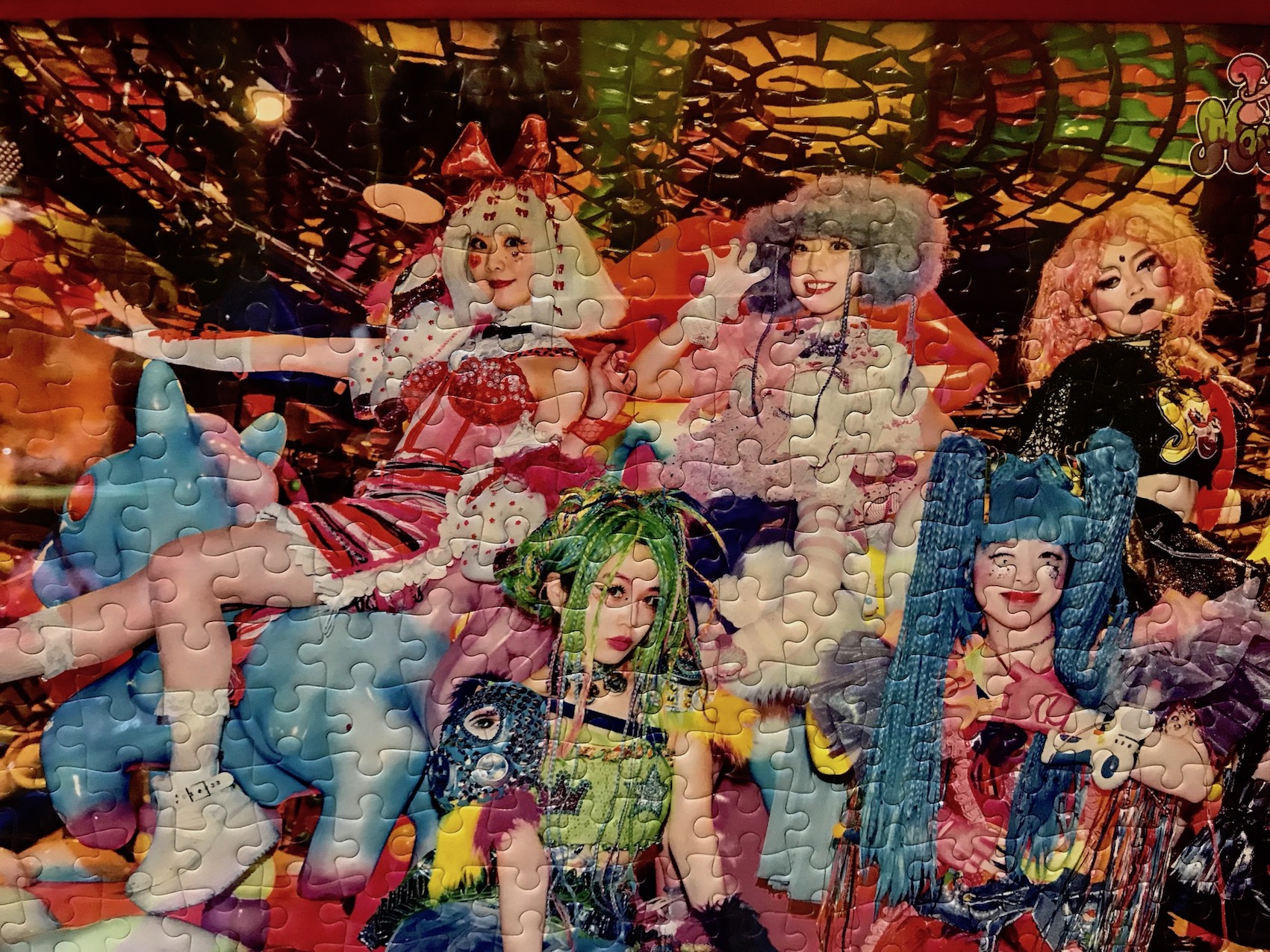 The hostesses with the mostesses.

On our way out we passed through the gift shop… which…. fear not, will more than satisfy your Kawaii Monster Café memorabilia needs. The hostesses here are clearly in this game for the long haul, as they feature in a whole bunch of official products like this cool puzzle.