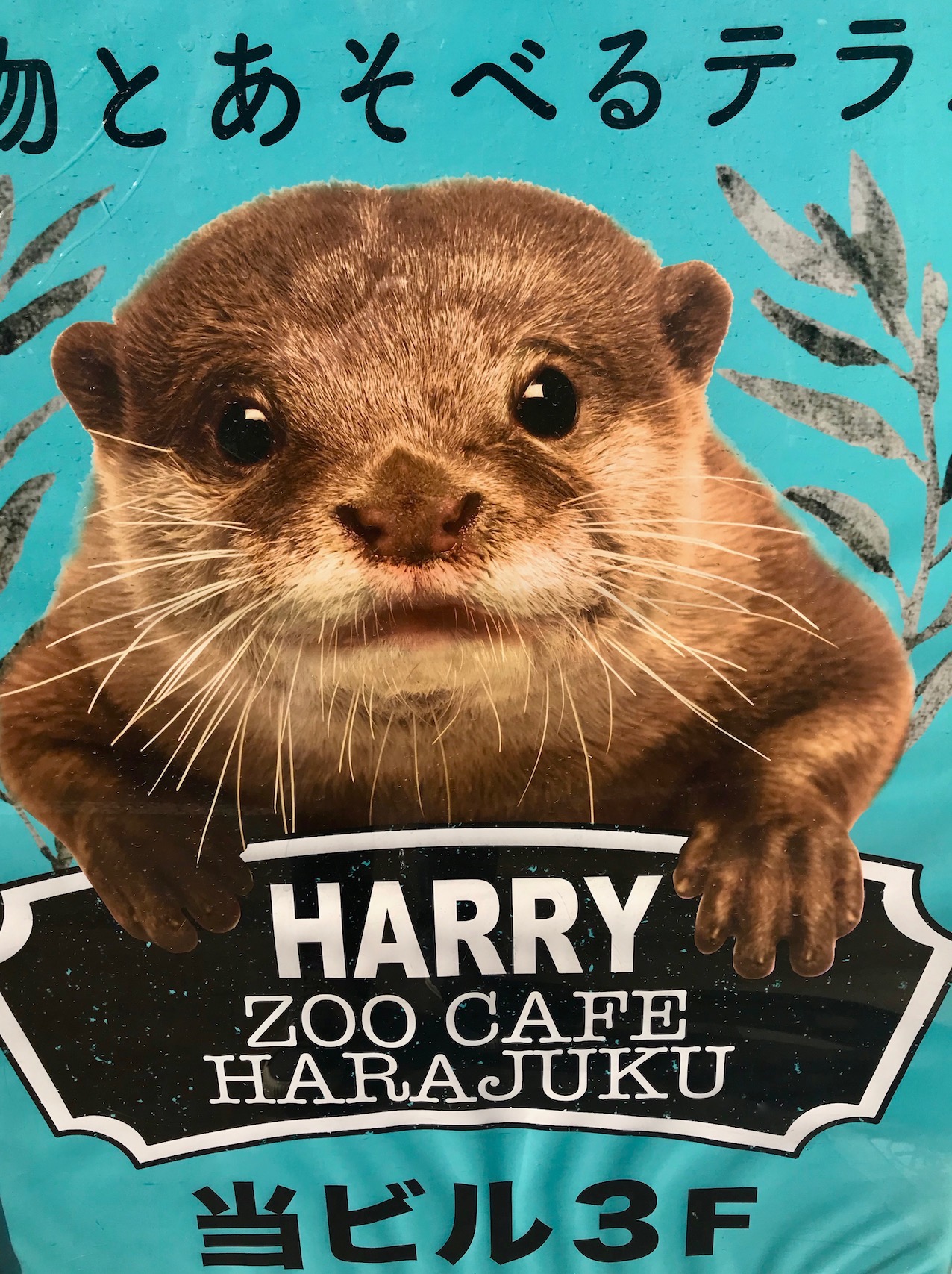 Reading from China? This Travel Report contains YouTube videos, which can only be viewed with a VPN!

February 2019. Tokyo’s animal café scene seems to inspire strong opinions from people. There are those that are idealistically opposed to the whole concept, saying that animals shouldn’t be messed with, just leave them in the wild to their own devices. But of course so many would cherish the opportunity to get up-close-and-personal with nature’s most beautiful beasts. I think my own viewpoint sits somewhere between the two. Of course it’s a thrill to hang out with amazing creatures, but for me it’s also important to know that the animals are happy, healthy and well treated. This is why my day trekking with elephants in Chiang Mai, Thailand will forever be a treasured memory and why I’ll always recommend Tokyo’s Akiba Fukurou Owl Café to anyone who’ll listen. In the Japanese capital’s Harajuku District meanwhile the animal spot of choice is Harry Zoo Café, so off I went with Wonderboy to see how this one measured up. 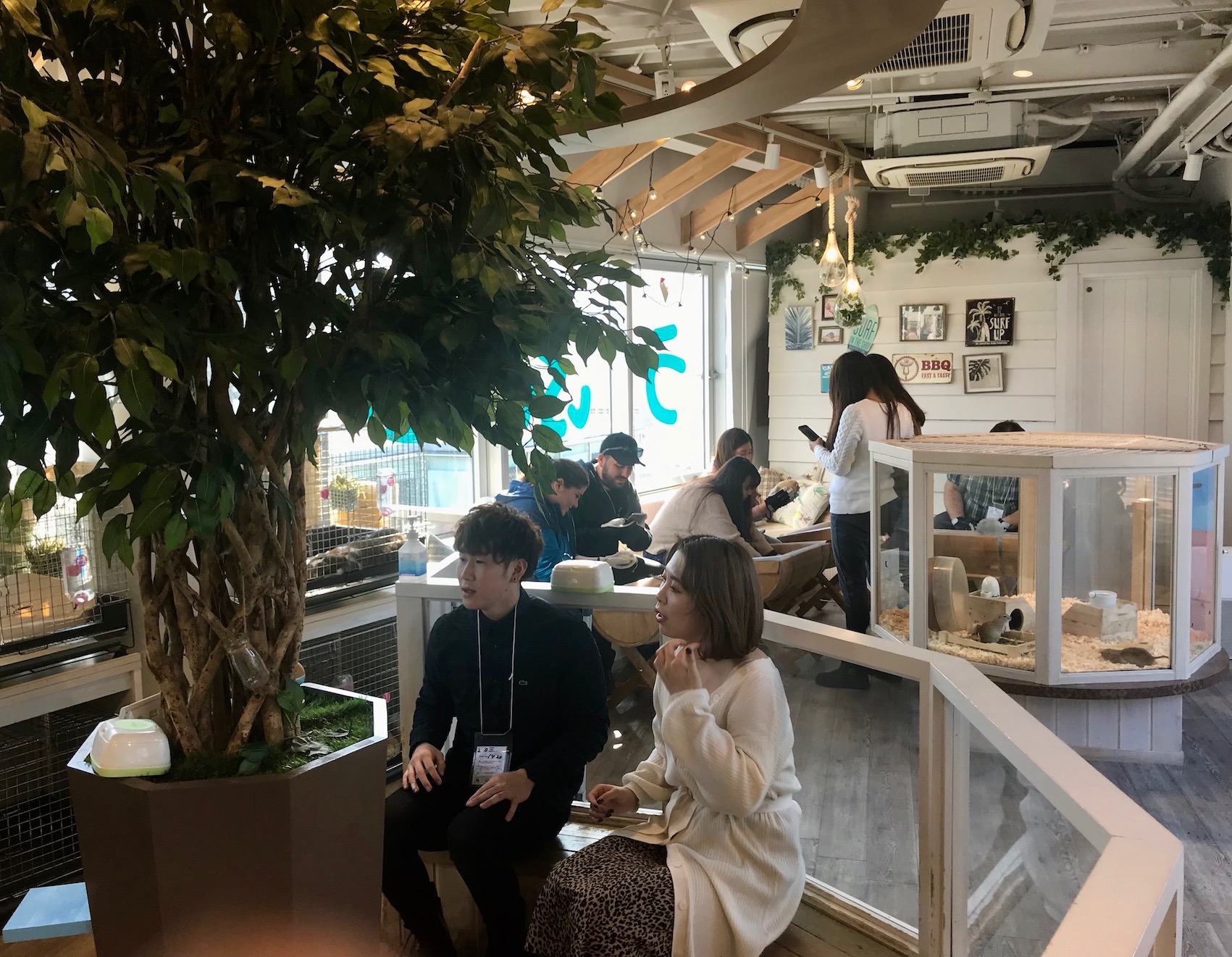 February 2019. Our Harry Zoo Café experience did not get off to a good start. First off the place was heaving… people everywhere… while the impatient, bitchy woman who received us at the front door had Wonderboy and I instantly exchanging dubious glances. Dispensing with any kind of greeting, she began aggressively barking price options at us and then got annoyed when we failed to instantly decide. Basically the more time you spend in the café the more expensive it is, while there are also add-ons like feeding the animals and a kitschy photo-op souvenir. Fearing that we were almost certainly entering conveyor belt tourism central, we decided to go for the shortest and cheapest option, a 30-minute stay priced at 1300JPY (£9/€10/$11.50). 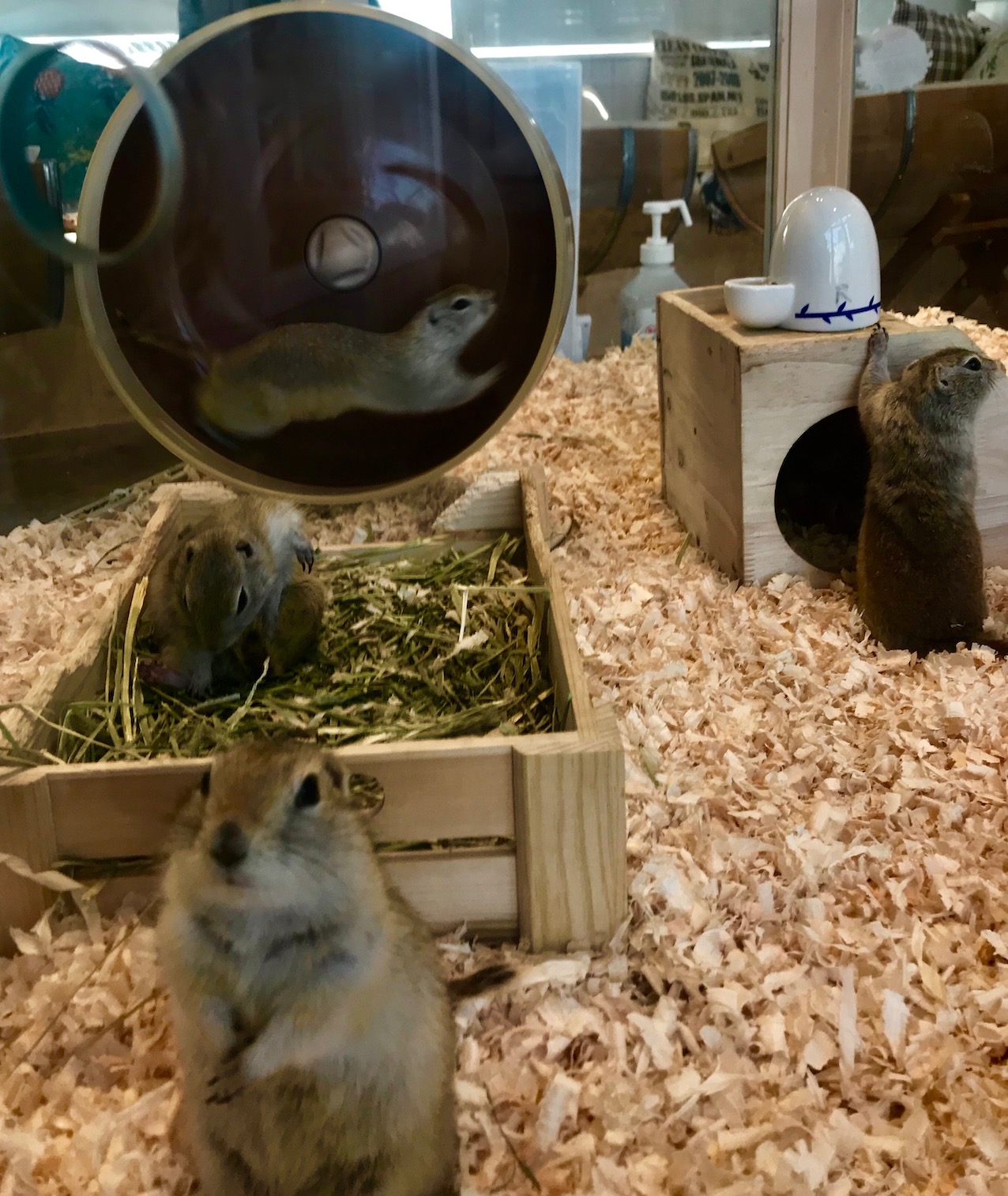 February 2019. Harry Zoo Café’s resident animals are kept in glass cases and the first one we checked out housed a group of lively chipmunks. They chased each other around the enclosure, took turns in sprinting on the wheel, pressed their inquisitive faces up against the window and crapped and pissed anywhere and everywhere in between.

Encouraged to hold one of the chipmunks, Wonderboy was promptly handed a beast who wasted no time in darting around his arms and shoulders before disappearing under the back of his shirt. He even got scratched: “Aaahgh! That ****ing hurts!” The girl attending us had to quickly fish Mr. Chipmunk out before he did some real damage. Chipmunk nails be sharp, y’all. 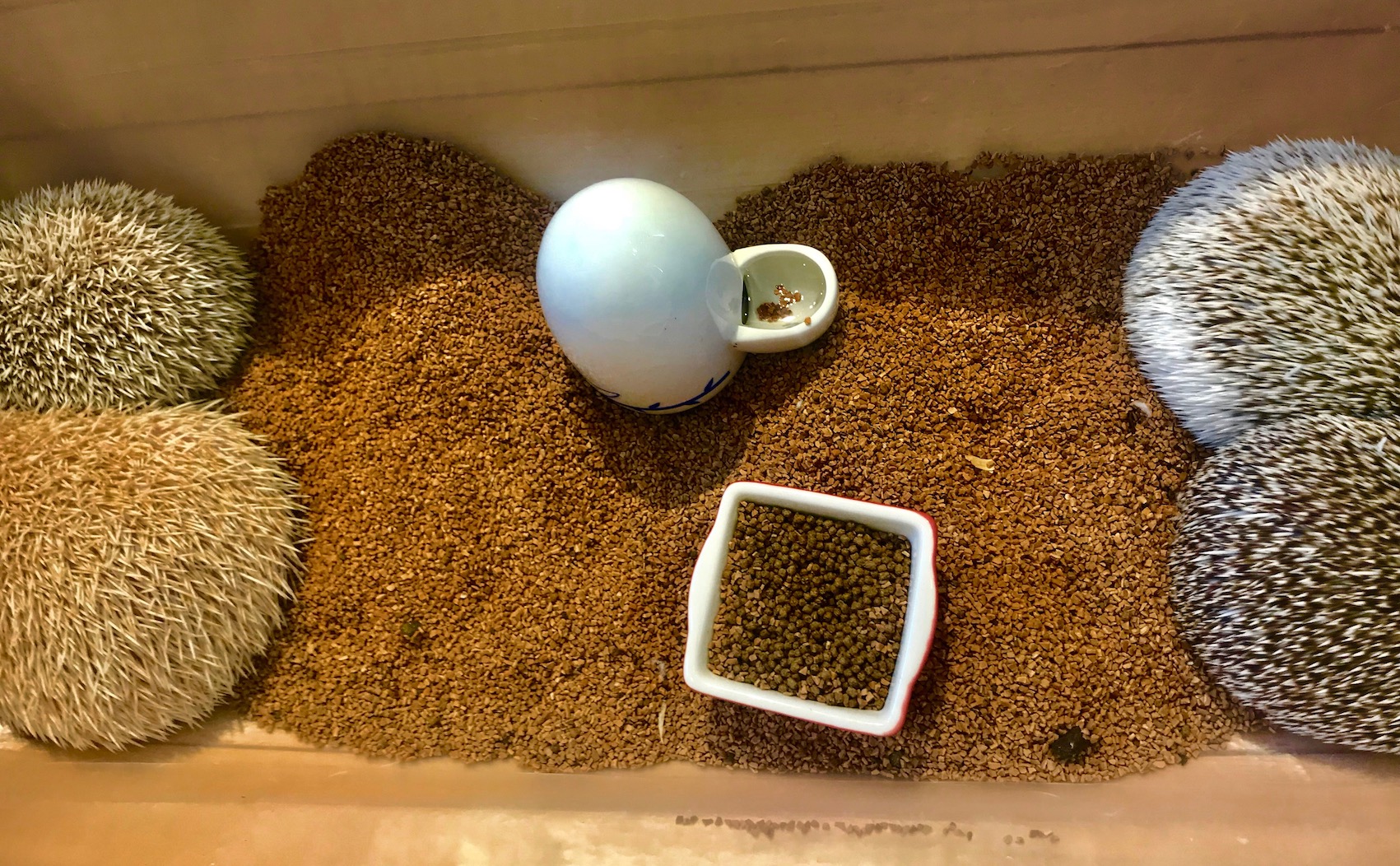 February 2019. In the run up to our visit I’d been keen on holding a hedgehog and my wish was duly granted when we reached Harry Zoo Cafe’s hedgehog village at the back wall. Most of them were balled up and sleeping, so I felt kinda bad for the one that got scooped up and unceremoniously dumped into my gloved hands. As Wonderboy quite rightly pointed out hedgehogs are nocturnal and, as I later read online, also solitary creatures not suited to being bunched together in a restricted space. 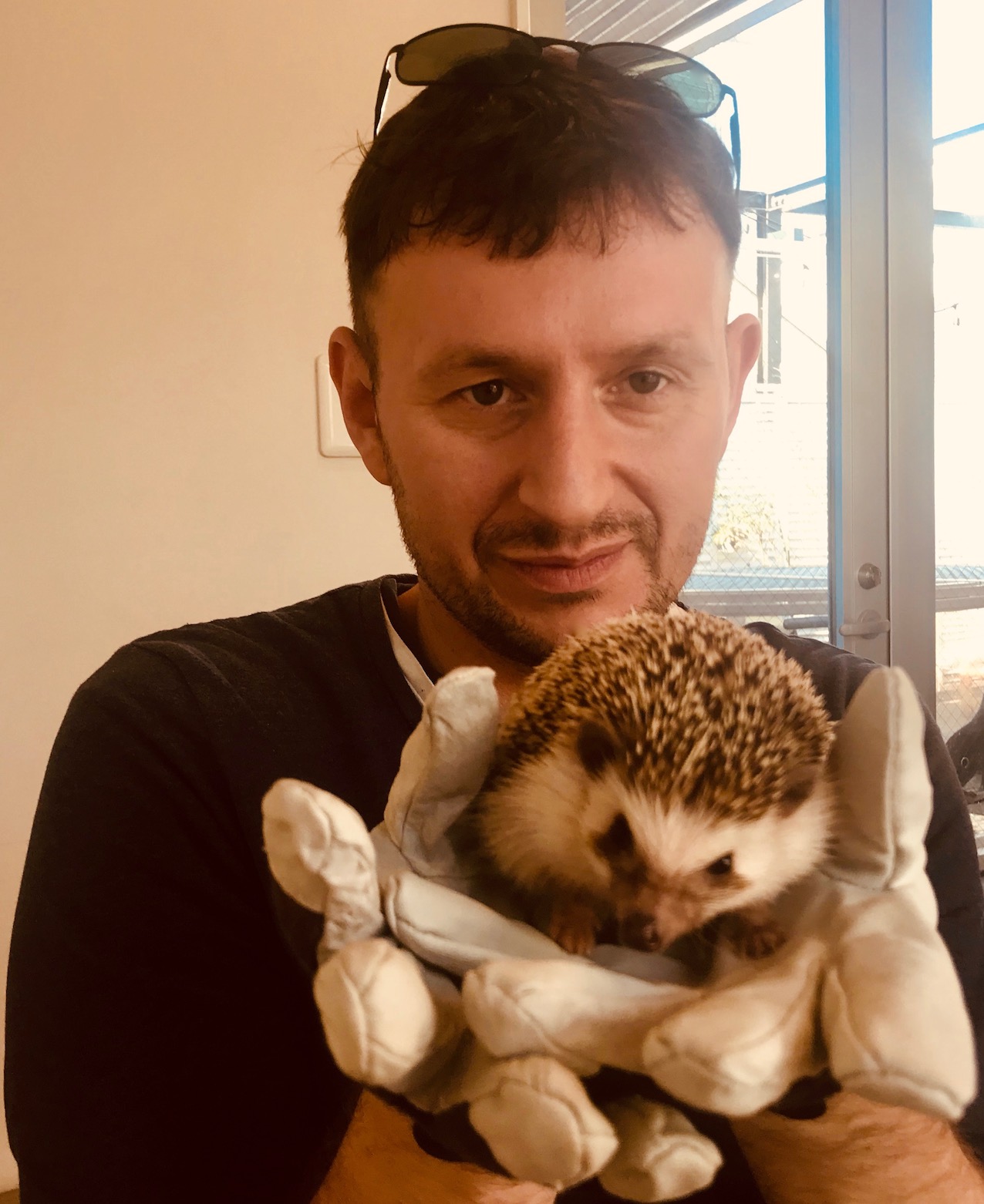 So it was with mixed feelings that I hung out with this cute little fella, an African Pygmy Hedgehog characterized by short, brown spikes and an adorable elongated snout. Harry Zoo Café actually breeds the hedgehogs themselves, so they live out their lives as fully domesticated beasts. Does this make it any better on the hedgehog? I’m not sure.

February 2019. It turns out 30 minutes really is as short as it sounds. After Chipmunk-gate and the very cute but mixed-feelings-inducing hedgehog experience, we quickly scooted around the rest of the cafe where… quite frankly… Harry Zoo Cafe’s already limited charms went rapidly downhill. First I was bitten by a chinchilla that really didn’t want to be held, which actually drew blood from my finger. Serves me right I suppose. But the most depressing sight of all was the otter exhibit which was clearly too small for the poor creatures. And then there were the idiotic tourists goading them by waving feed in front of the air holes but refusing to drop any inside. 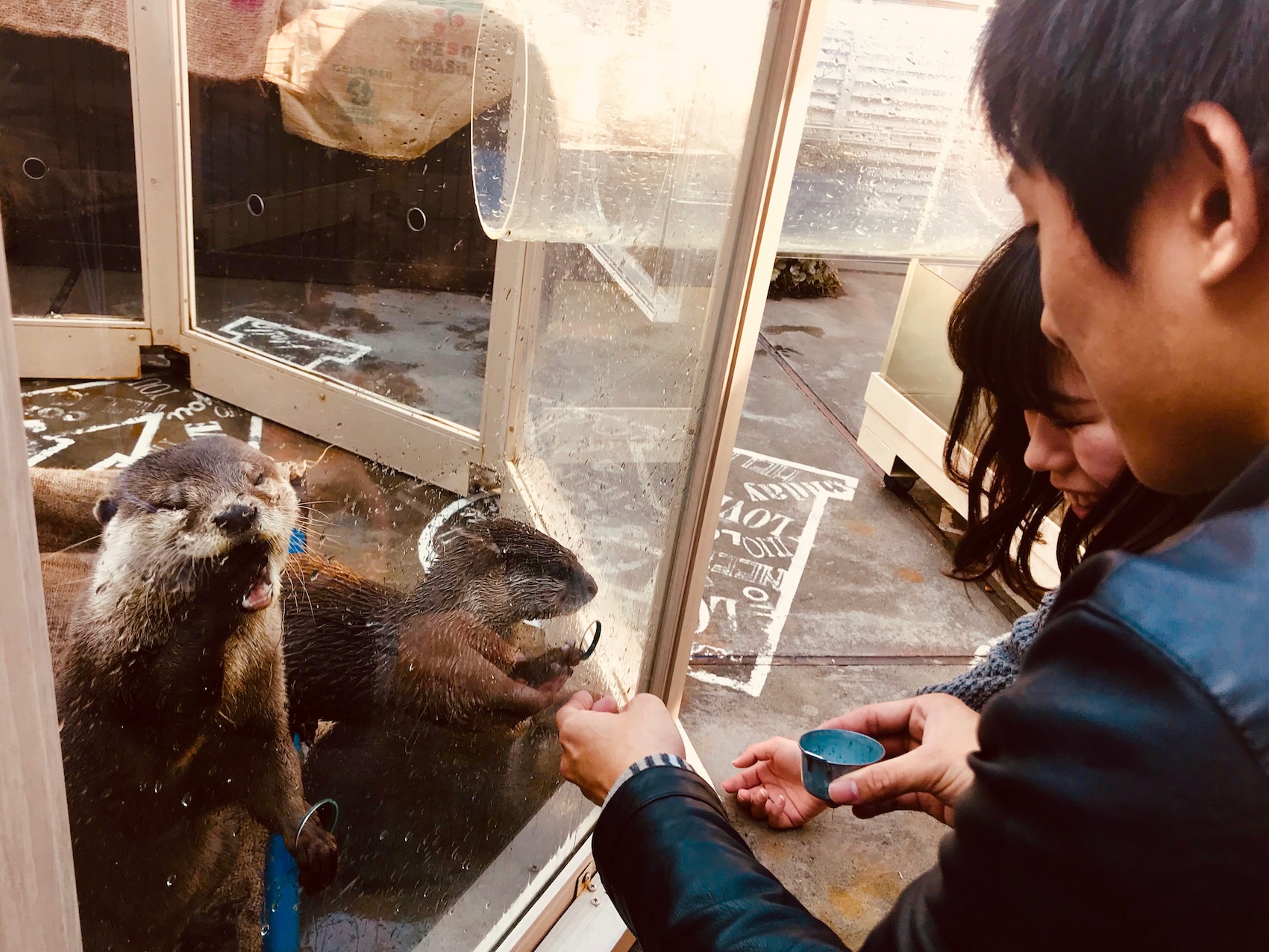 Can I recommend Harry Zoo Cafe? Not really. Holding a hedgehog was pretty cool, but other than that it was the biggest disappointment of my Tokyo trip. The reasons for this can be best summarized as follows:

If you still want to come and have a look, Harry Zoo Cafe is located right on Harajuku’s hip Cat Street among all the trendy stores and boutiques. They’re open seven days a week from 11:00-19:00.