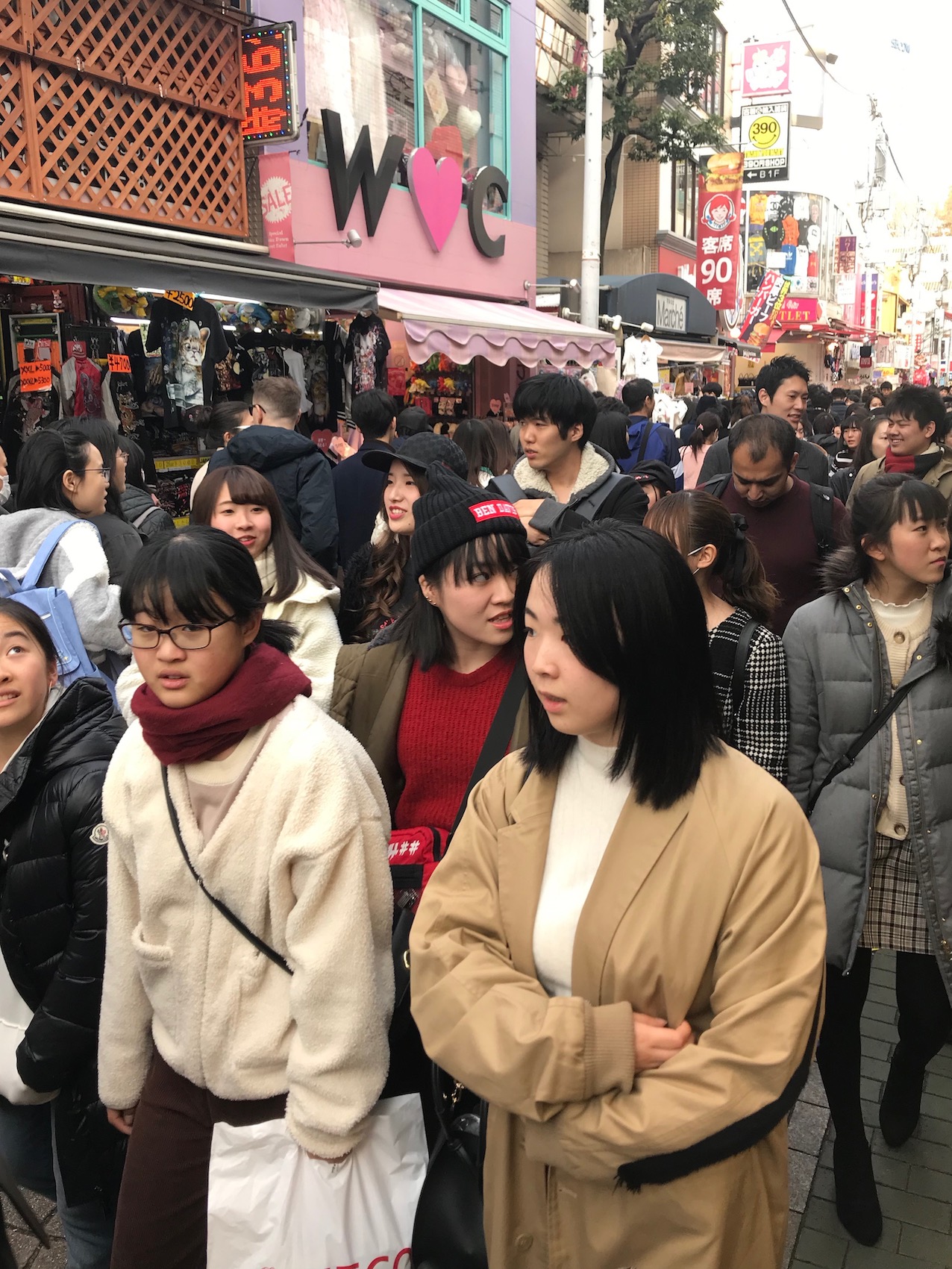 February 2019. I have to admit that Wonderboy and I had been somewhat unprepared for the unbridled insanity of Tokyo’s Takeshita Street. We’d been expecting it to be busy of course, after all it was a Sunday afternoon in the city’s trendy Harajuku district and this was the shopping street to check out, a spot described in one online article as “400 meters of fun, food and fashion”. But… dear god… we hadn’t quite anticipated this! And so our initial childish amusement (Take A Shit Street, hee hee hee) rapidly dissipated into a somewhat blunt conclusion that this was simply… shit.

February 2019. We had entered Takeshita Street on a side road and so, already woven into the melee, quickly resolved to push on ahead to the nearby arched entrance where we could a) untangle ourselves from the horror and b) get an elevated overview of everything. This was easily the busiest spot I saw during my stay in the Japanese capital and, come to think of it, the only place I would describe as truly chaotic. Definitely not where you’d want to find yourself in if you need to take-a-shit. Sorry. 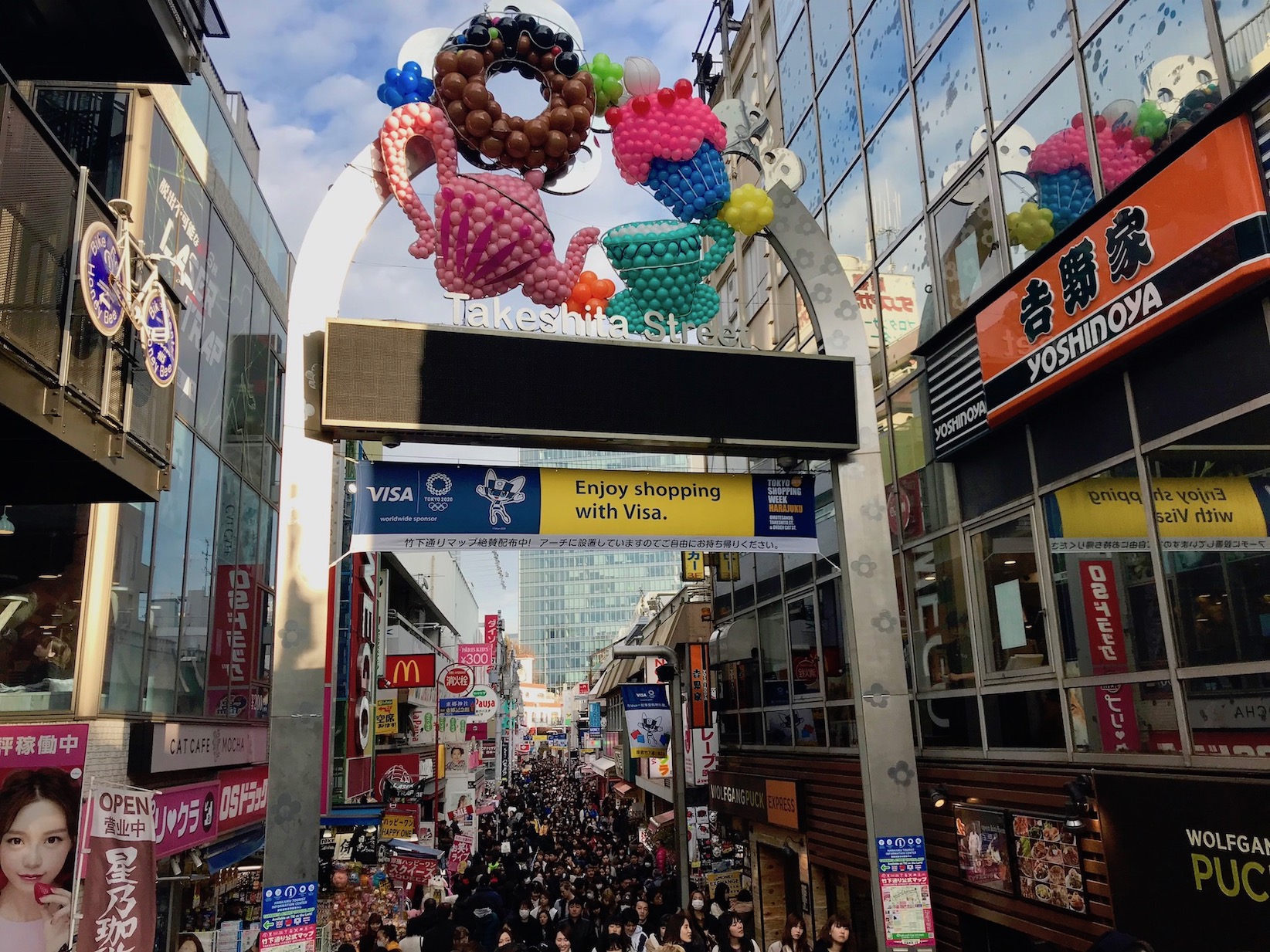 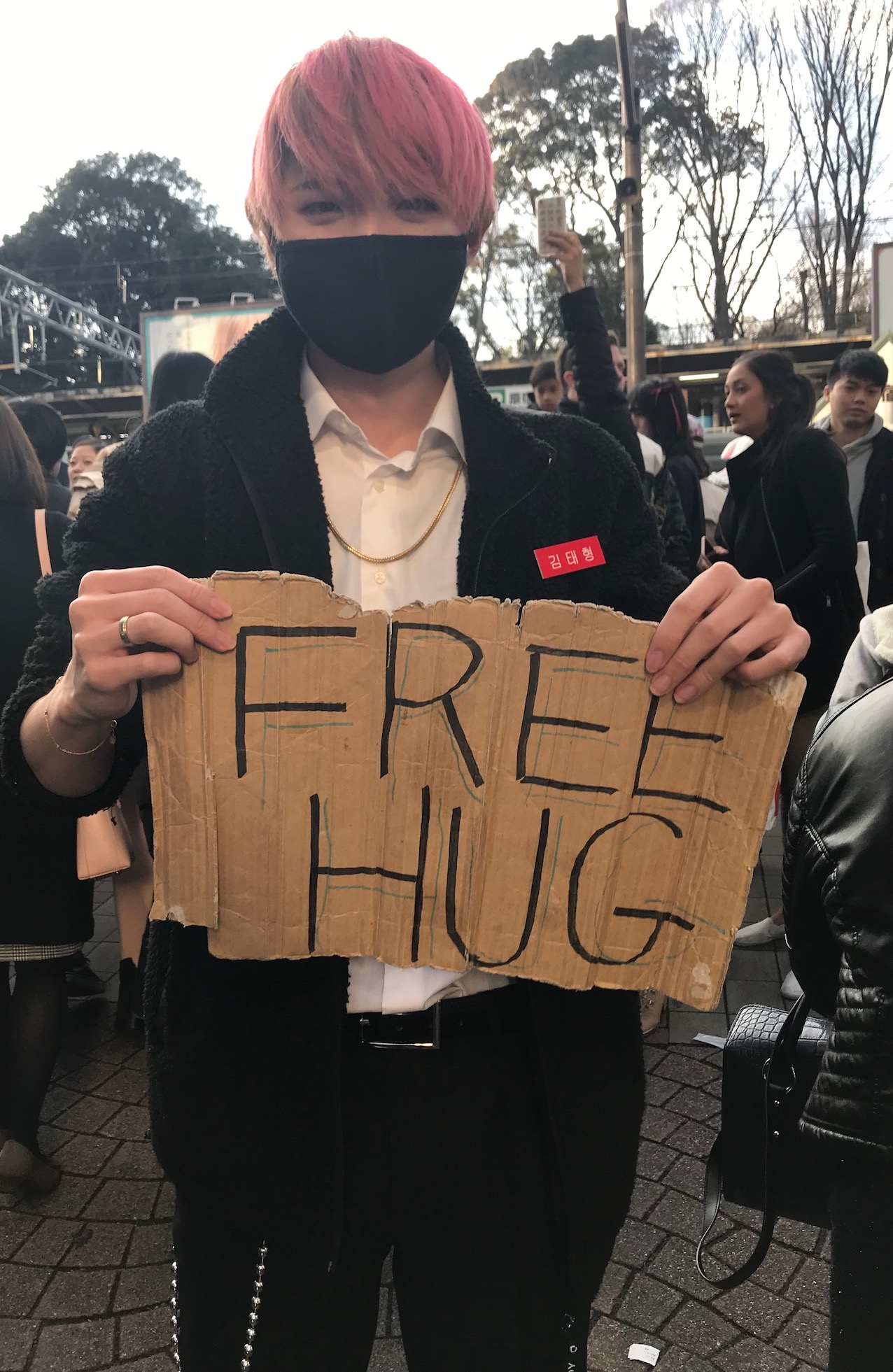 February 2019. There were loads of people stood at Takeshita Street’s lofty entrance lining up photos through the silver archway with its nauseous “Enjoy shopping with Visa” sign. There was also a friendly, red-haired fashionista giving out free hugs so, unsure of our next move, I gave him a quick cuddle before Wonderboy and I briefly discussed whether we had any appetite whatsoever to go back in and explore.

February 2019. Finally we decided to head back into the cauldron, but only as a means to reach a parallel street called Brahms Path, which had come recommended as a leafy, café-lined respite to Takeshita Street’s non-stop agitation. So in we went again and… finding things slightly more manageable this time… spontaneously dipped into one of the side lanes where the order of the day was kitschy sock stalls, cosmetic stores and shoe shops. It was largely uninspiring stuff, though I did find myself tickled by this old man and his stall, a curious mix of gaudy jewelry and ghoulish Trump-Kim friendship T-shirts. 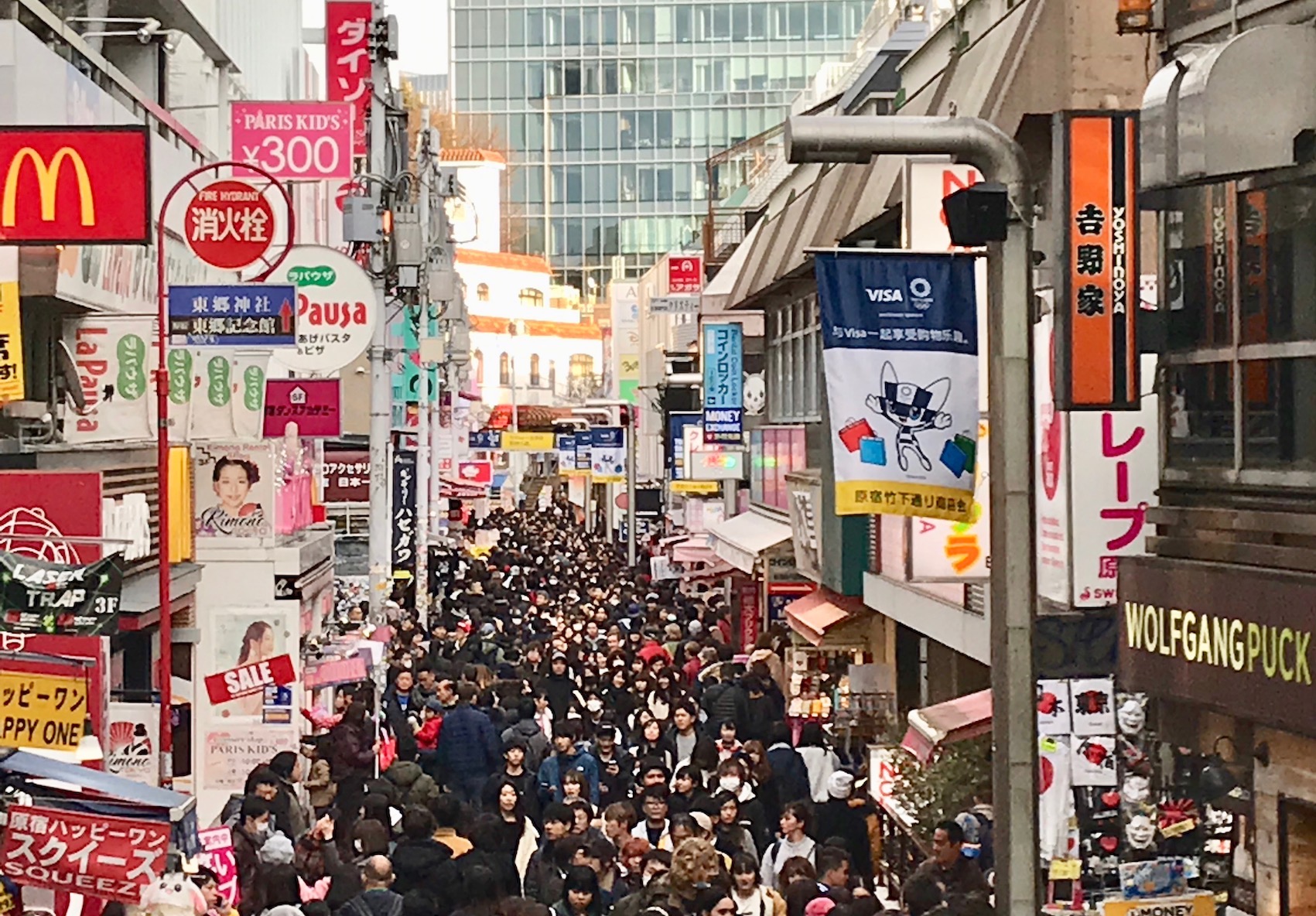 February 2019. Takeshita Street is probably best seen during a weekday morning or afternoon when things will almost certainly be less hellish. The reason we’d penciled it in for a Sunday afternoon was to catch Tokyo’s trendy youth strutting around in cosplay, a weekly tradition that was sadly lacking that day. Or maybe we’d just missed it all in the cacophony. If you do come here on the weekend then good luck, you have been warned! The nearest Subway station is Meiji-Jingumae Station, from which it’s just a 3-minute walk from Exit 3. Most of the stores here open from around 11:00-20:00. 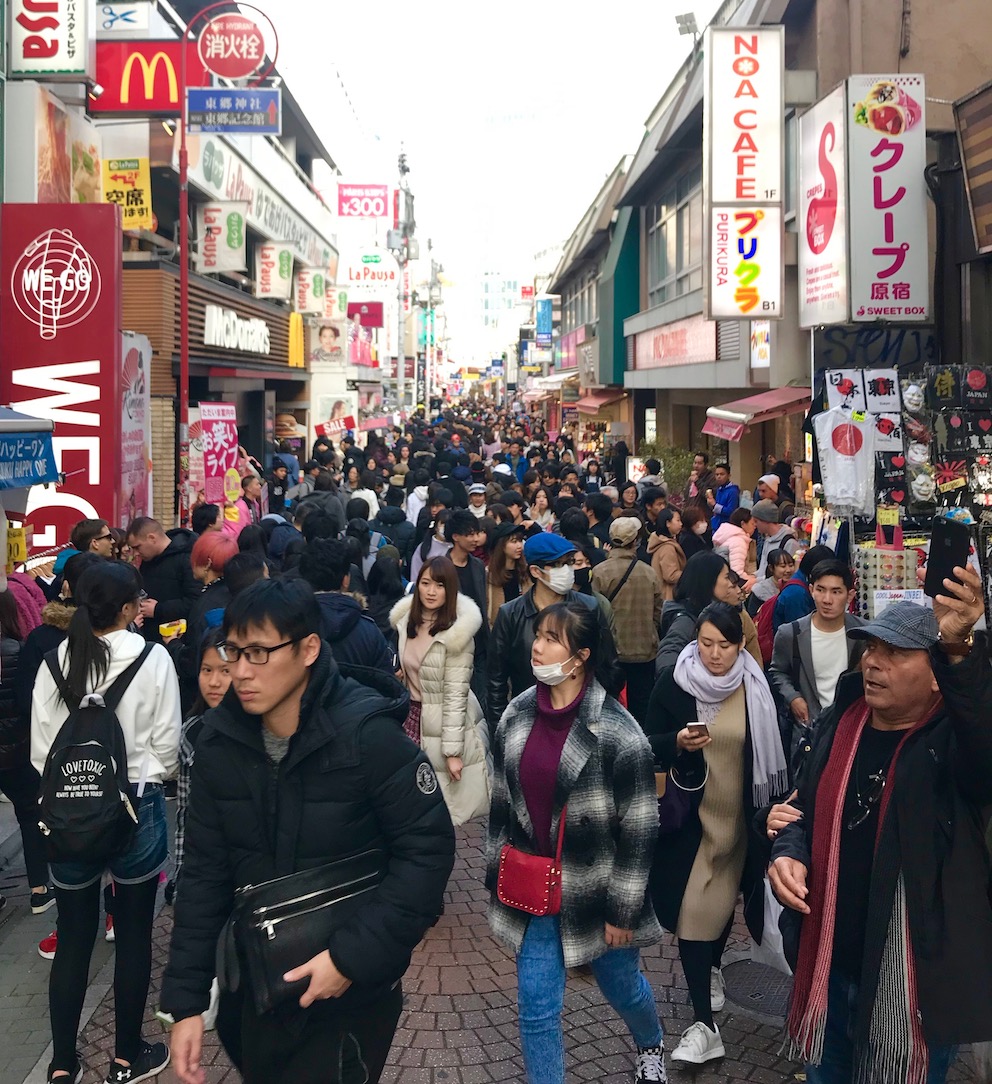