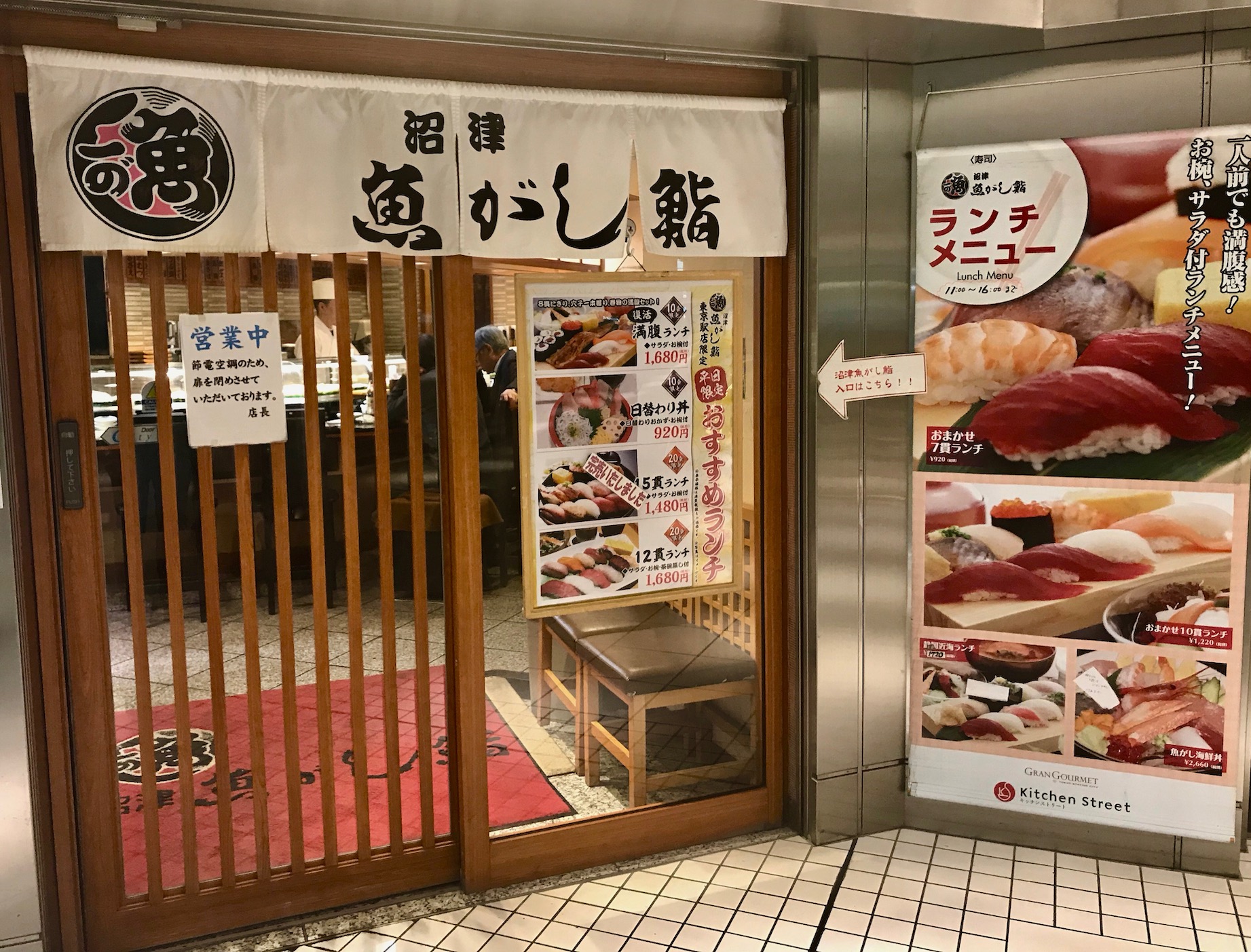 February 2019. Lordy lordy had I been looking forward to a proper sushi feast in Tokyo! After a couple of false starts it was finally time to get some of that good stuff as Wonderboy, Rich and I found ourselves exploring mazy Kitchen Street in Tokyo Station City. Tucked away in a quiet corner, we took a chance on Gran Gourmet with its reasonable set menu deals and uniformed chefs.

February 2019. The vibe at Gran Gourmet was just what we were looking for. It was about 16:00 in the afternoon and, nicely nestled between the end of lunch and the upcoming dinner rush, we’d caught them at a low ebb. Settling in at an American diner style booth, it was just us and a few middle-aged Japanese men at the bar as the immaculately dressed sushi chefs fiddled away on handmade creations in the open kitchen. 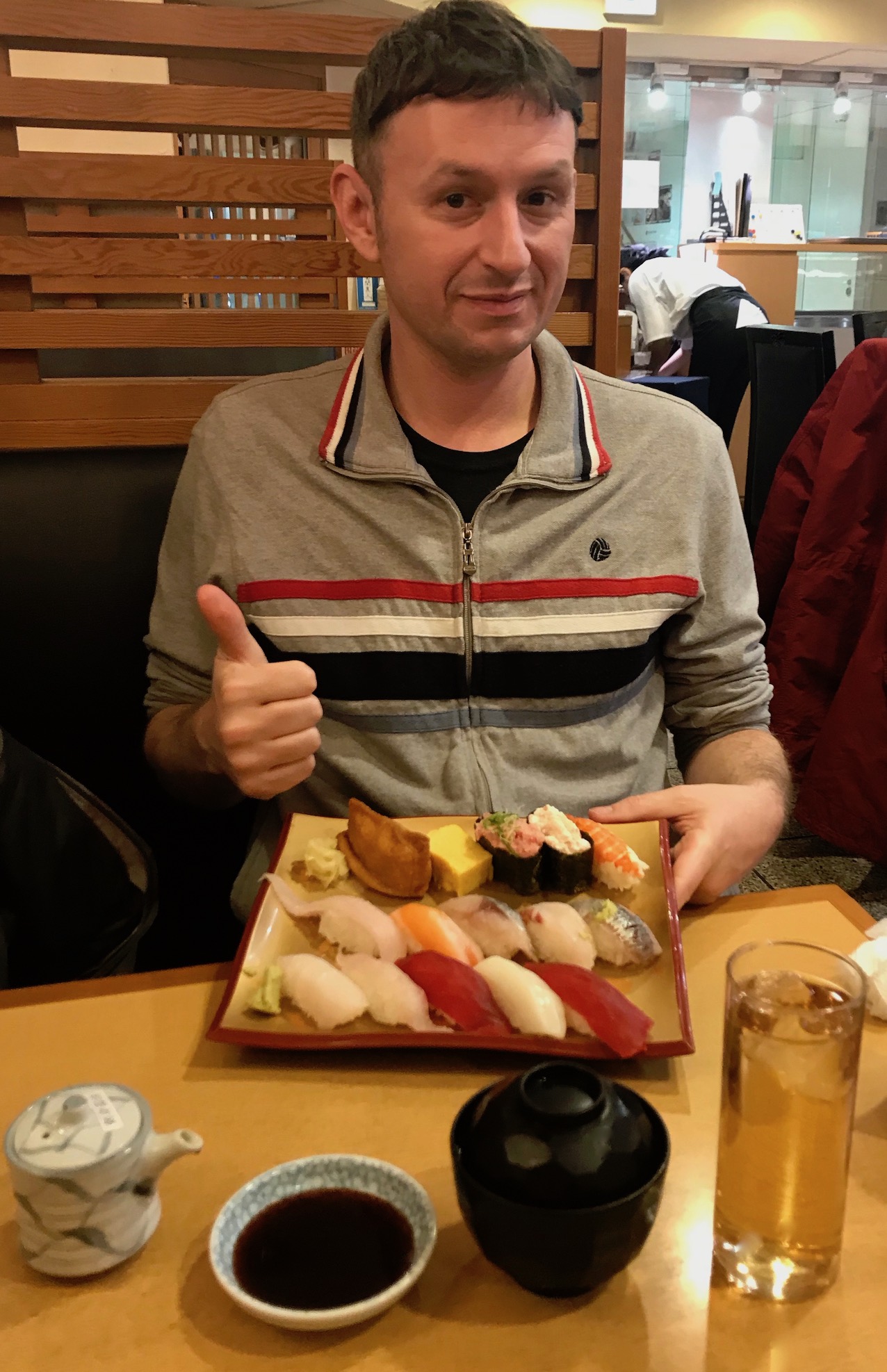 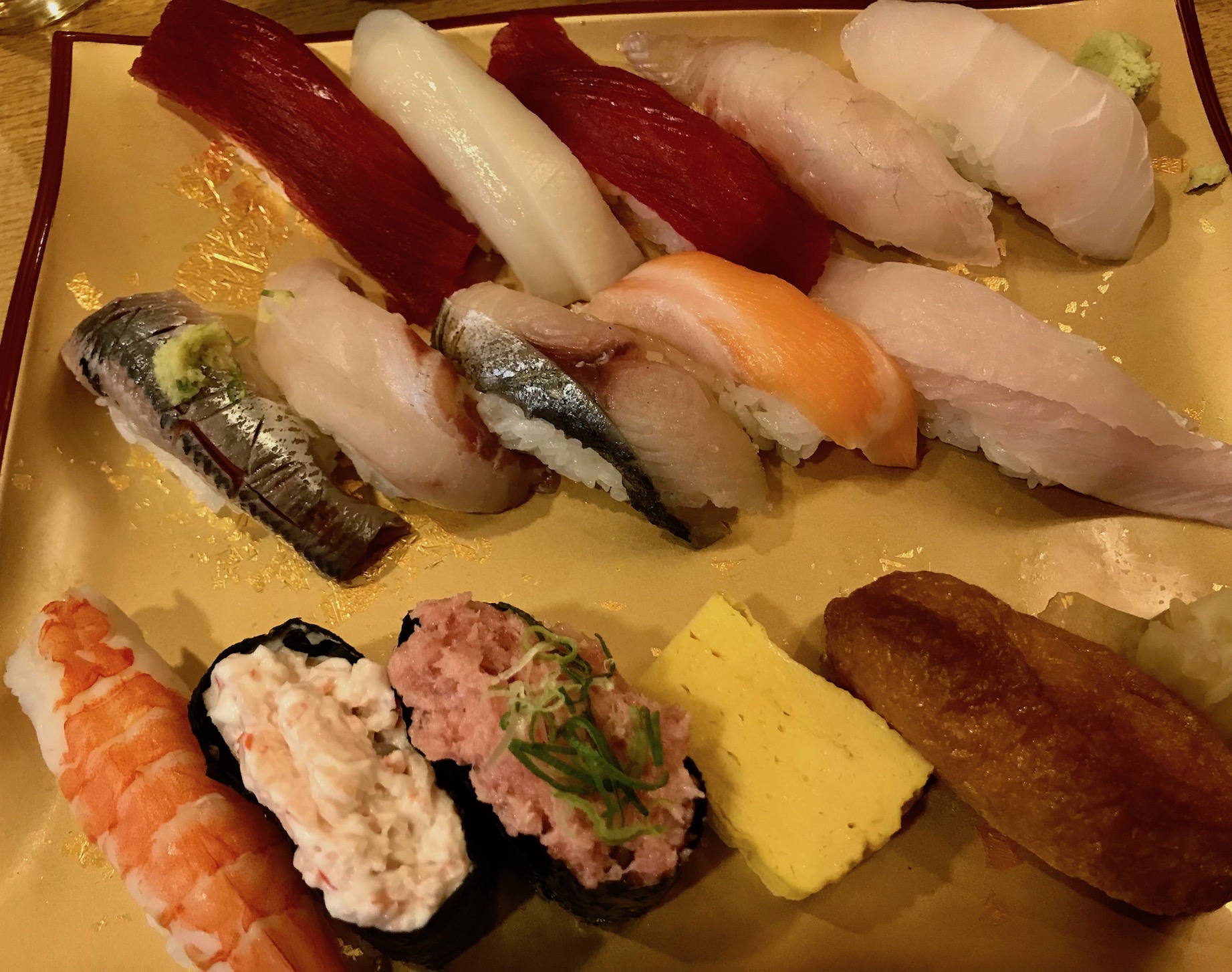 February 2019. Sushi can be an expensive business in Tokyo, with most visitors going for simple conveyor belt style joints to keep the cost down. But Gran Gourmet’s set deals are very reasonable and the sushi is freshly prepared. This 15 piece mixed platter was priced at 1,480JPY (£10/€12/$13.50) and came with a small bowl of salad, a pot of Miso Soup and complimentary tea. It blew away all the sushi I’d had previously and there were even a few styles I hadn’t tried before. 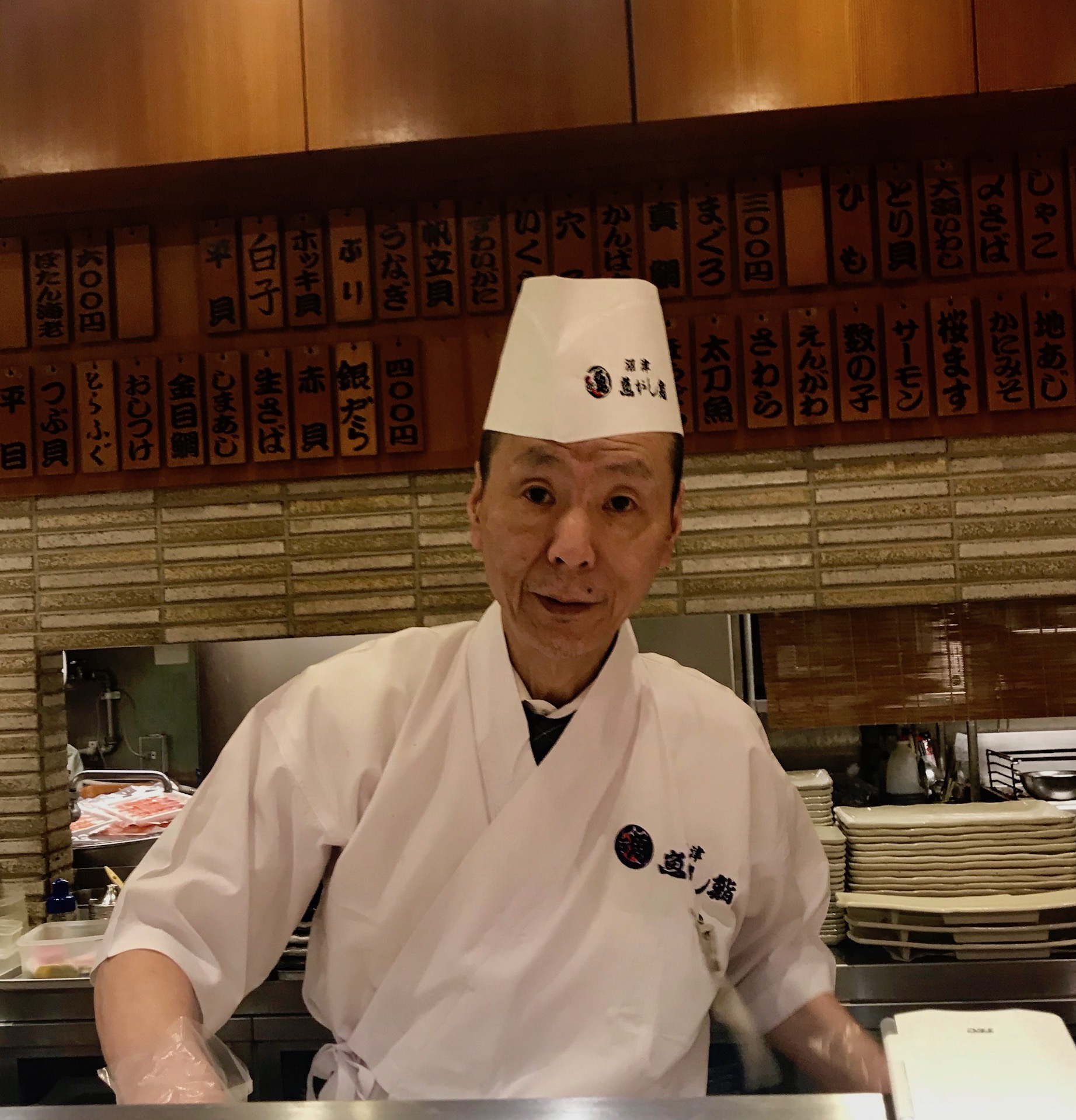 February 2019. Our waitress spoke a bit of English but luckily, with longtime expat Rich on board, she was spared the ordeal of having to explain everything. I loved watching the grizzled old chef doing his thing behind the counter. He was so orderly and measured in the way he went about his work, a well-oiled machine so to speak. And the look on his face as I tried to discreetly grab this shot says it all, he’d seen the likes of me a thousand times over. 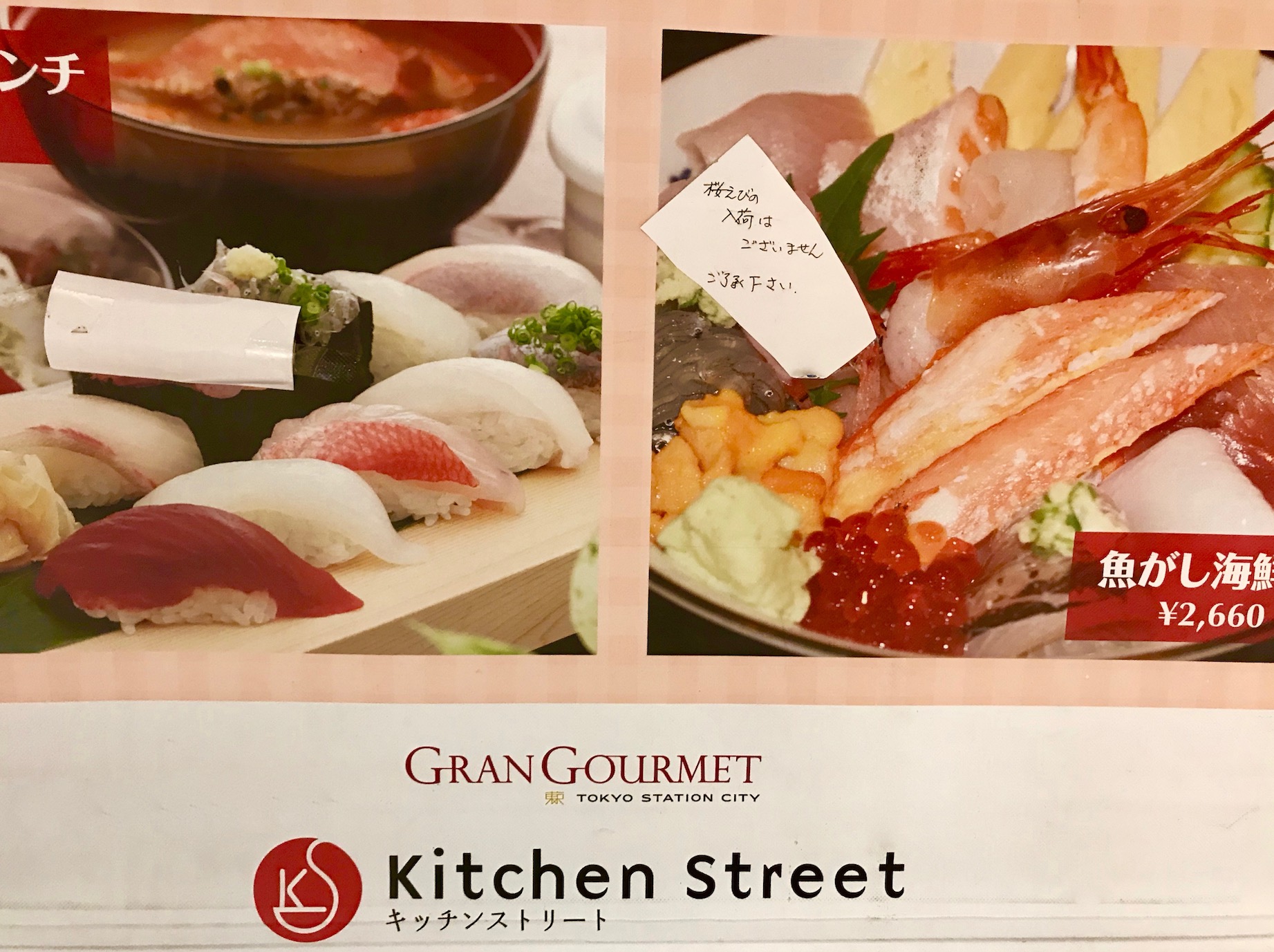 February 2019. I can’t recommend Gran Gourmet Sushi highly enough! If you’re in and around Tokyo Station head down to Kitchen Street and pick out their name on the restaurant map. It was a little tricky to find but boy oh boy is it worth it!  Yet another culinary win in the Japanese capital!