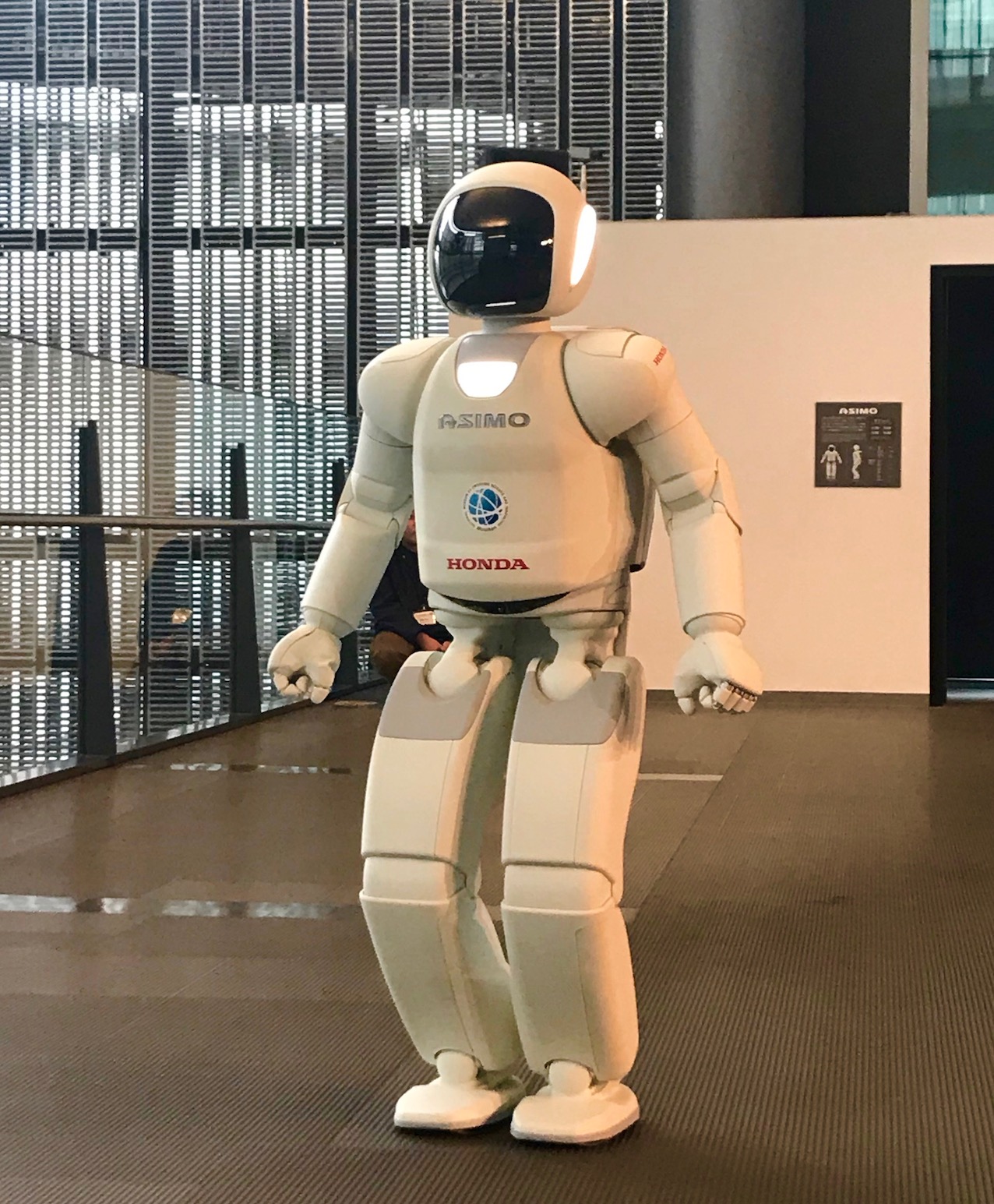 February 2019. I was a week into my Tokyo trip when finally our attention shifted to Odaiba, the Japanese capital’s manmade island home to a string of the city’s biggest shopping and entertainment venues. The main reason we’d come was for a morning at Miraikan: The National Museum of Emerging Science and Innovation. Focusing on the so-called “frontiers of science”, the Miraikan presents a number of exhibitions to help us learn about humanity’s relationship with the universe alongside the ever evolving and improving technologies that propel us into the future. Arriving on a grey, wet morning, we were just in time to Meet ASIMO, the world’s most advanced humanoid robot.

February 2019. ASIMO was created by the Japanese motor company Honda in 2000 as a tool to “assist people in their daily lives”. The Miraikan holds two ten-minute demonstrations every day where you can see ASIMO strutting his stuff and showing off a few tricks. He runs… he hops… he dances… he waves at the audience and he takes a solid if unspectacular soccer penalty that’s comfortably saved by his technician. 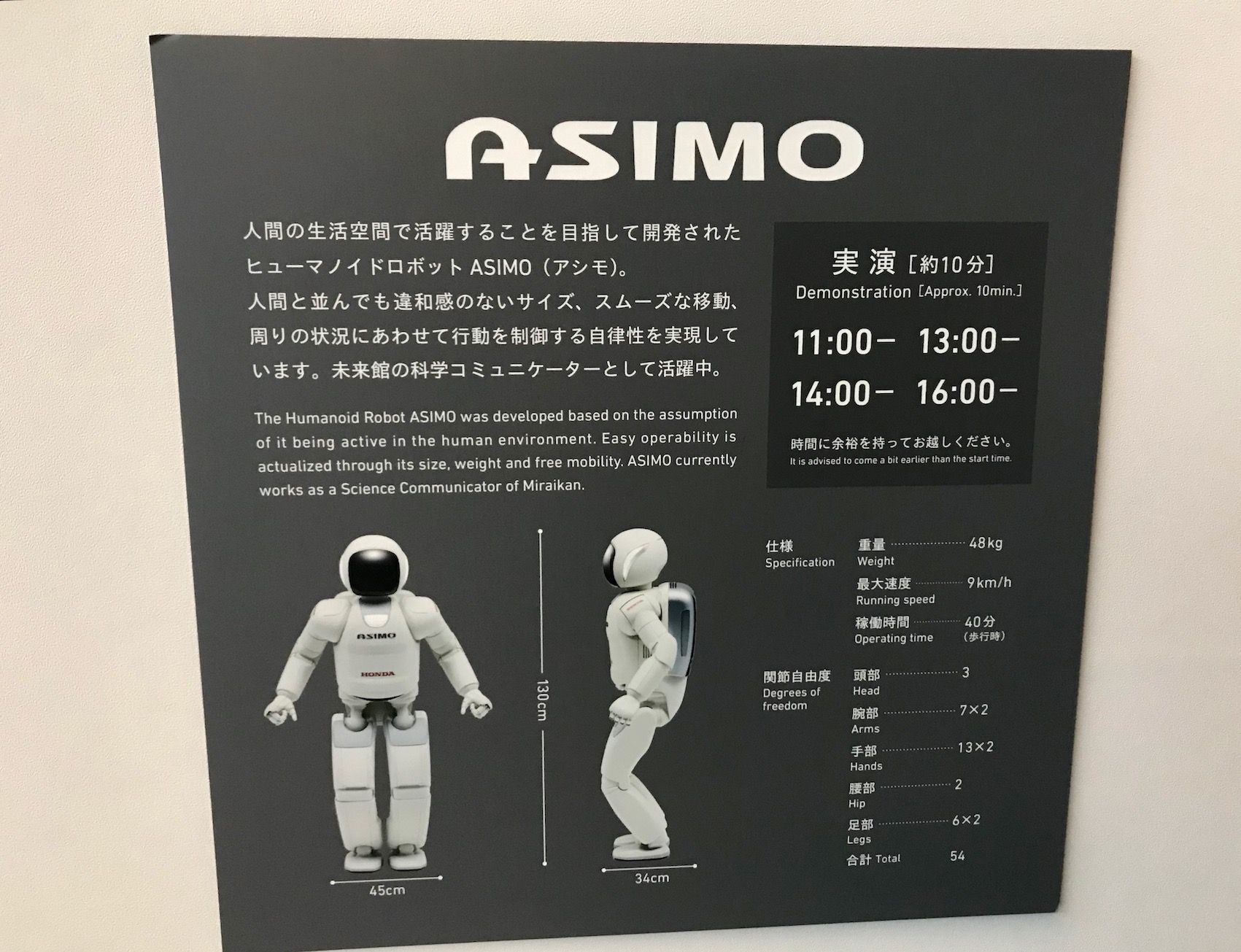 Most impressive of all, ASIMO performs sign language to a popular Japanese song before disappearing behind a curtain to a solid round of applause from the crowd. It’s a brief and modest show of his abilities but nevertheless very cool to see him up close! 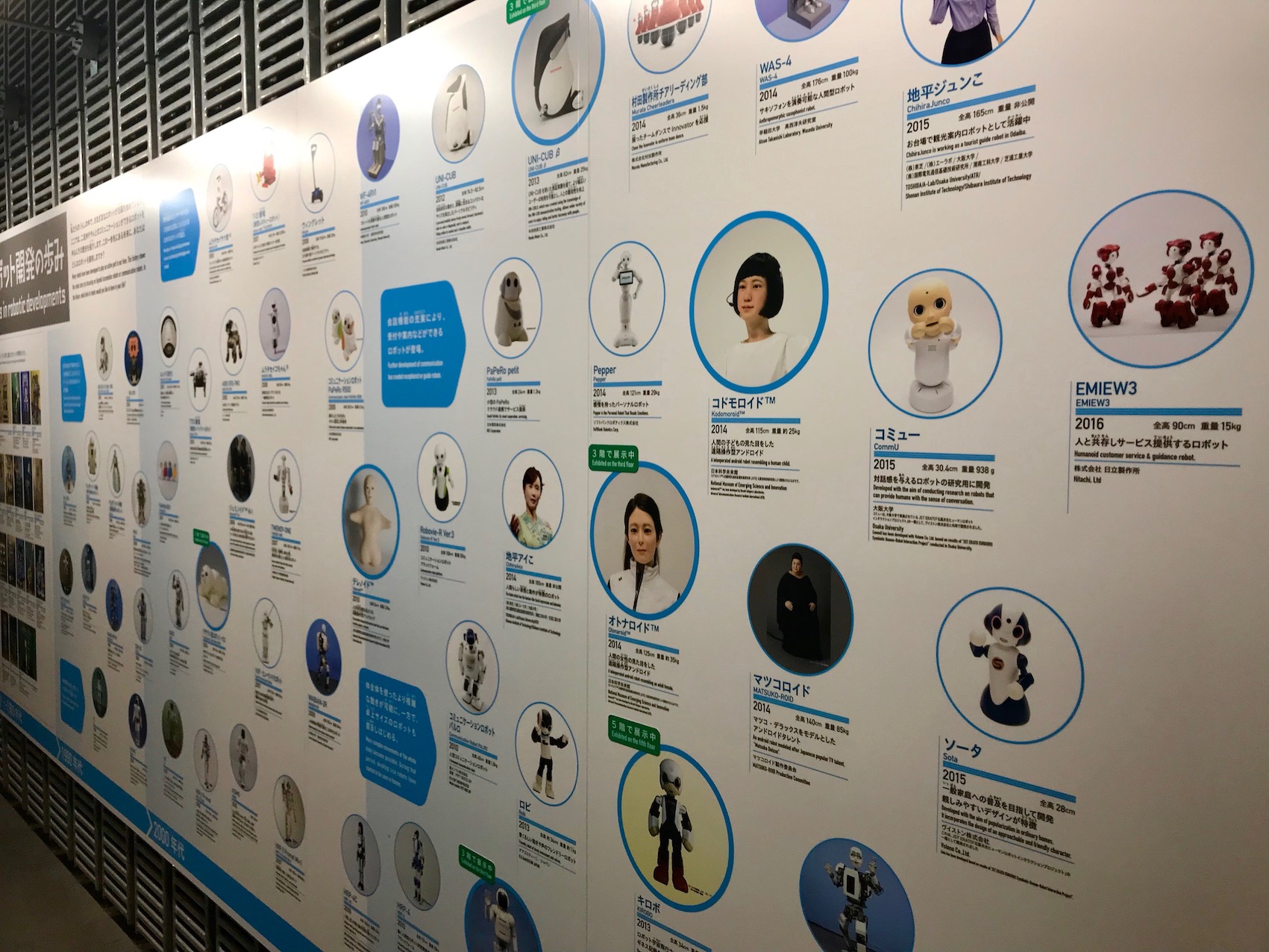 February 2019. The Meet ASIMO demonstration is part of the Miraikan’s Robots In Your Life exhibition, which asks us to “imagine a future in which you live with a variety of robots”. It provides a really interesting overview of how robotics has evolved over the years, with a run through of the very first machines right through to the all-singing and dancing present day models. 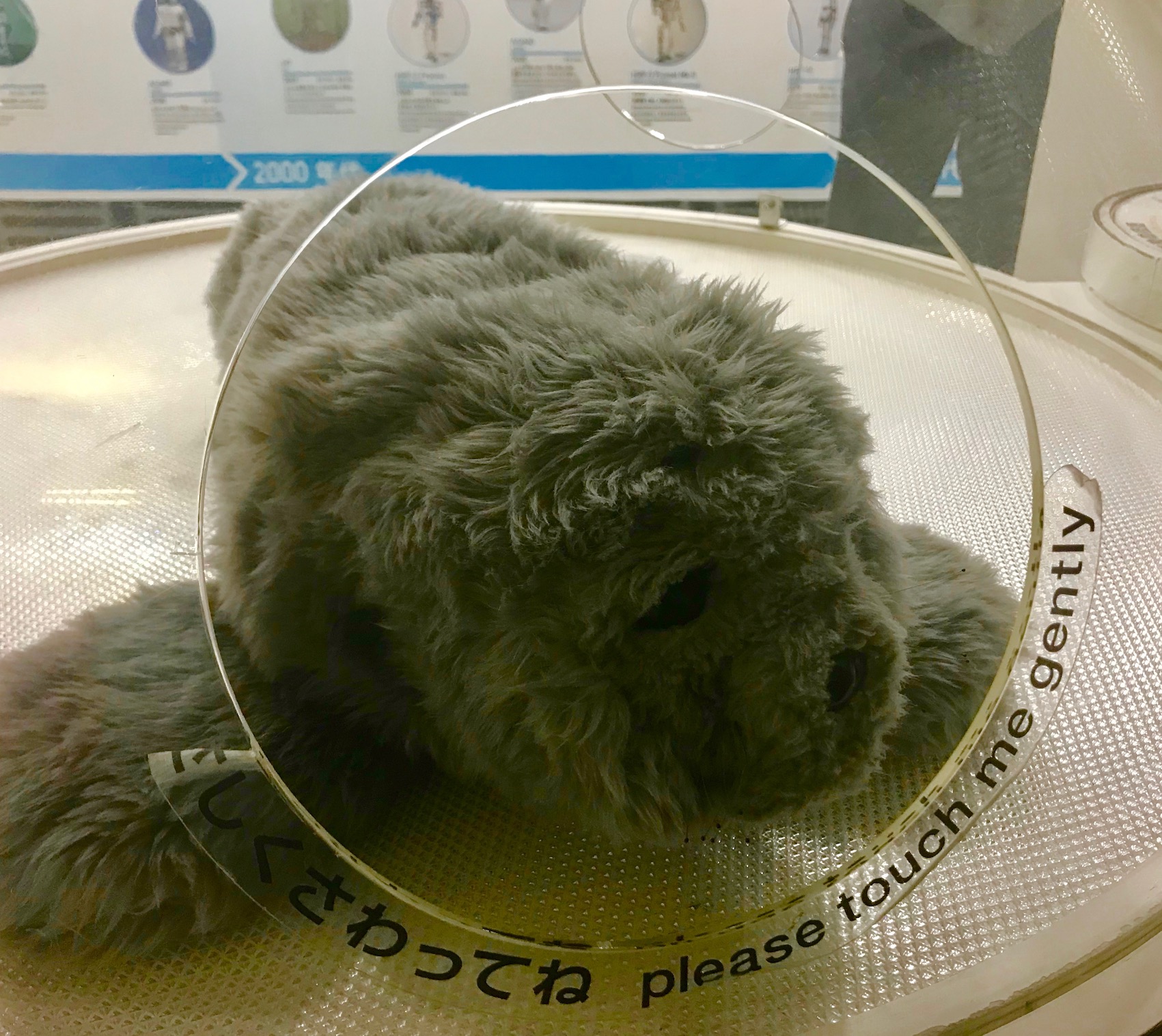 Keep an eye open for Therapeutic Robot Paro: a soft toy seal designed to encourage mental stimulation such as pleasure and comfort through physical interaction. According to the accompanying blurb, Paro is for people unable to keep real pets and as a companion for kids in hospital. Basically you can stroke and pat Paro to see how it responds, an idea that seemed totally lost on the group of Chinese kids mindlessly pulling, shaking and banging him around as their clueless parents grinned away in equal oblivion. 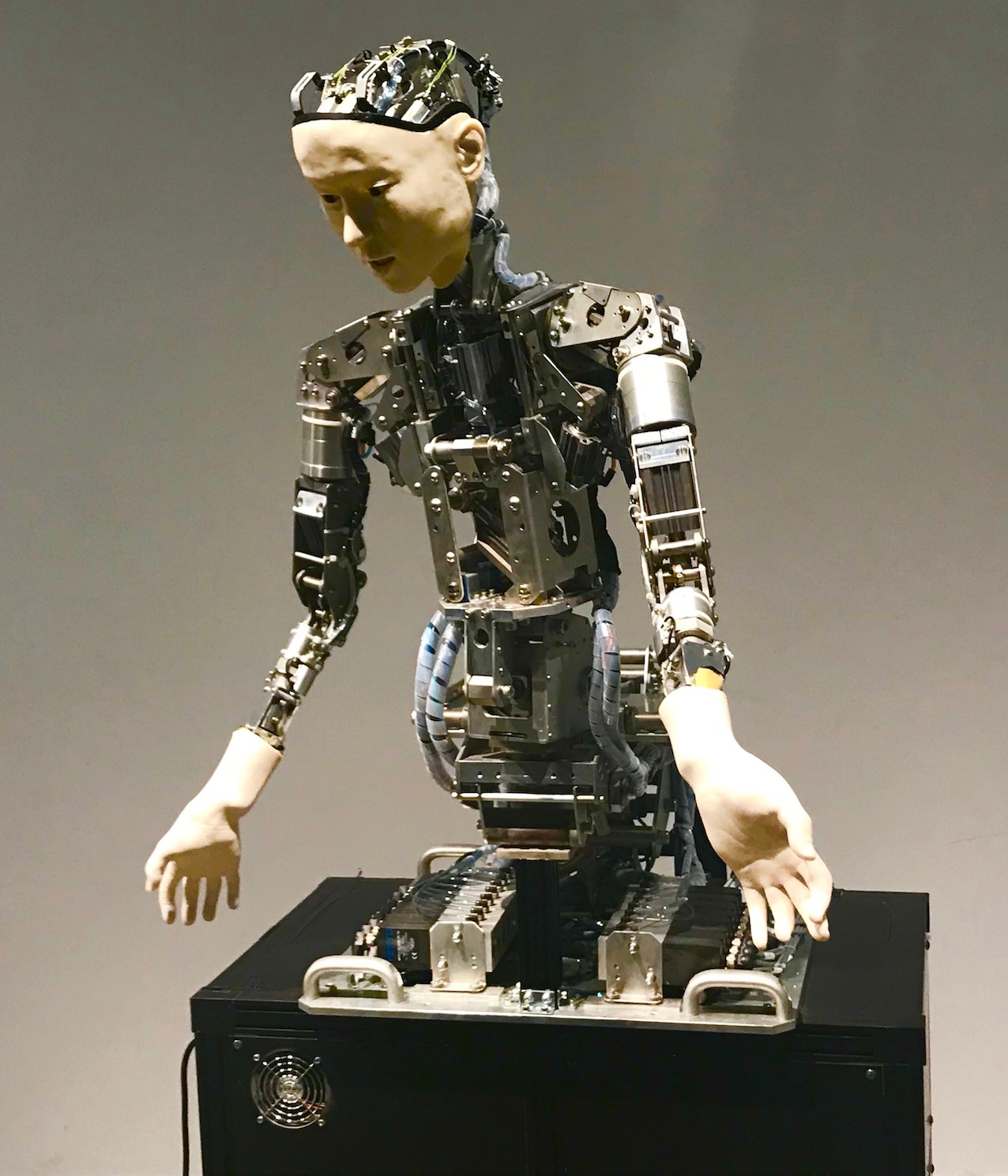 February 2019. The What is Human? exhibition puts a spotlight firmly on androids. Alter is a robot developed to explore what it means to be “life-like“. The mechanics behind how Alter works is complicated stuff, at least for a simpleton like me. Explained in layman terms, Alter reacts in real time to the movements around her through sensors.

Alter comes fitted with 1.000 nerve cell chips, which allow her to send compressed air to her 42 joints in order to create “smooth, life-like movements”. The thing is, watching her flail about as she does, none of it seemed that smooth at all. 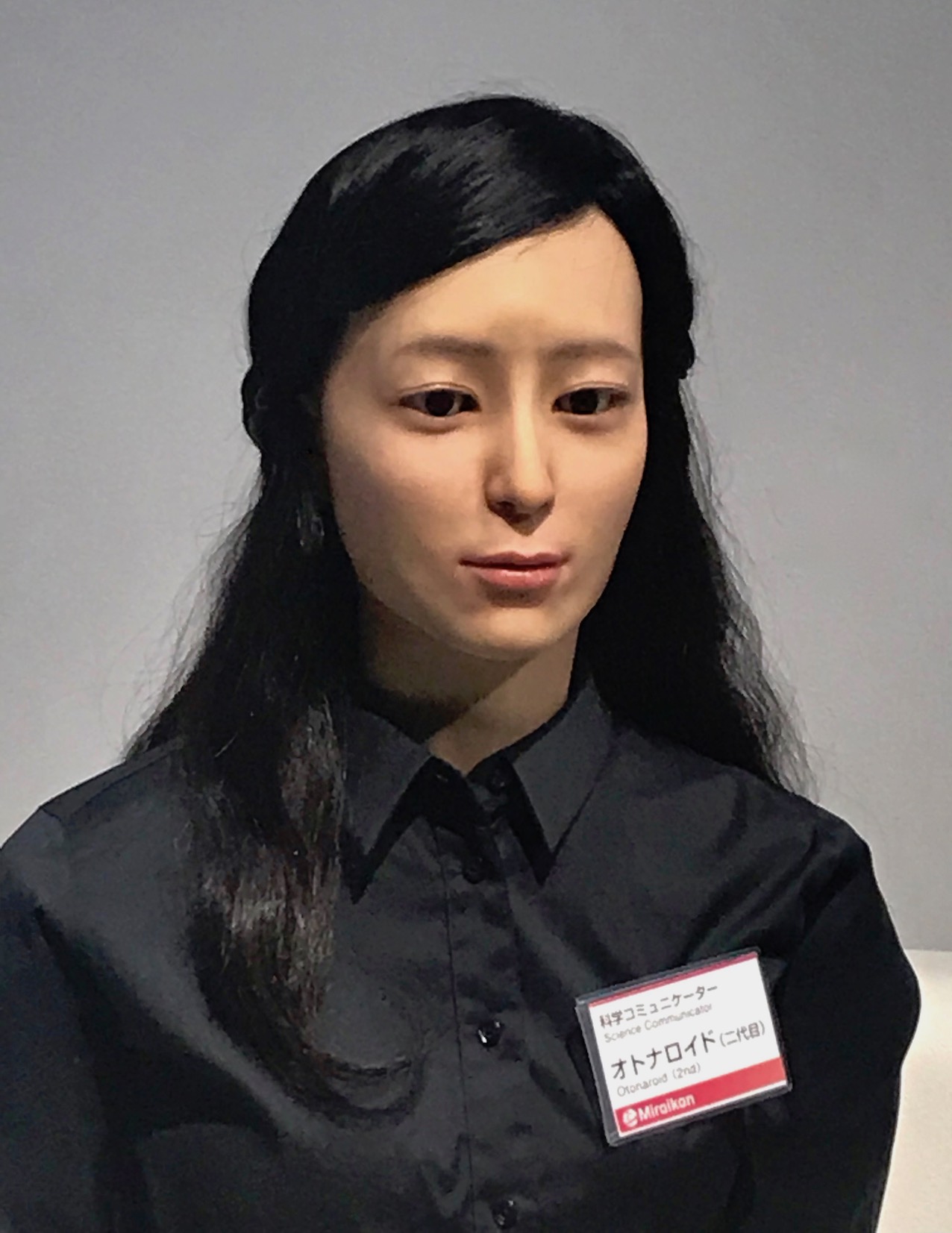 February 2019. For me the most fascinating part of the morning was chatting to Otonaroid, a much more human-like android seemingly able to respond to visitors’ questions. I’d been drawn over by the sound of her attempting to deal with all the queries thrown in her direction.

Those first few minutes of dialogue were amazing, until my general awe was dampened by the revelation that Otonaroid is in fact teleoperated by a Japanese science communicator housed in an adjacent booth. After a while he came out to meet us… answering questions, showing us skin samples and posing a few thought-provoking questions of his own about the nature of humanity and what sets us apart from robots.

The scientist was really friendly and helpful. Once the crowd had drifted away he took some time to talk more with Wonderboy and I. Fishing a plastic bag from his pocket, he explained how Otonaroid’s left eye serves as the android’s primary camera.