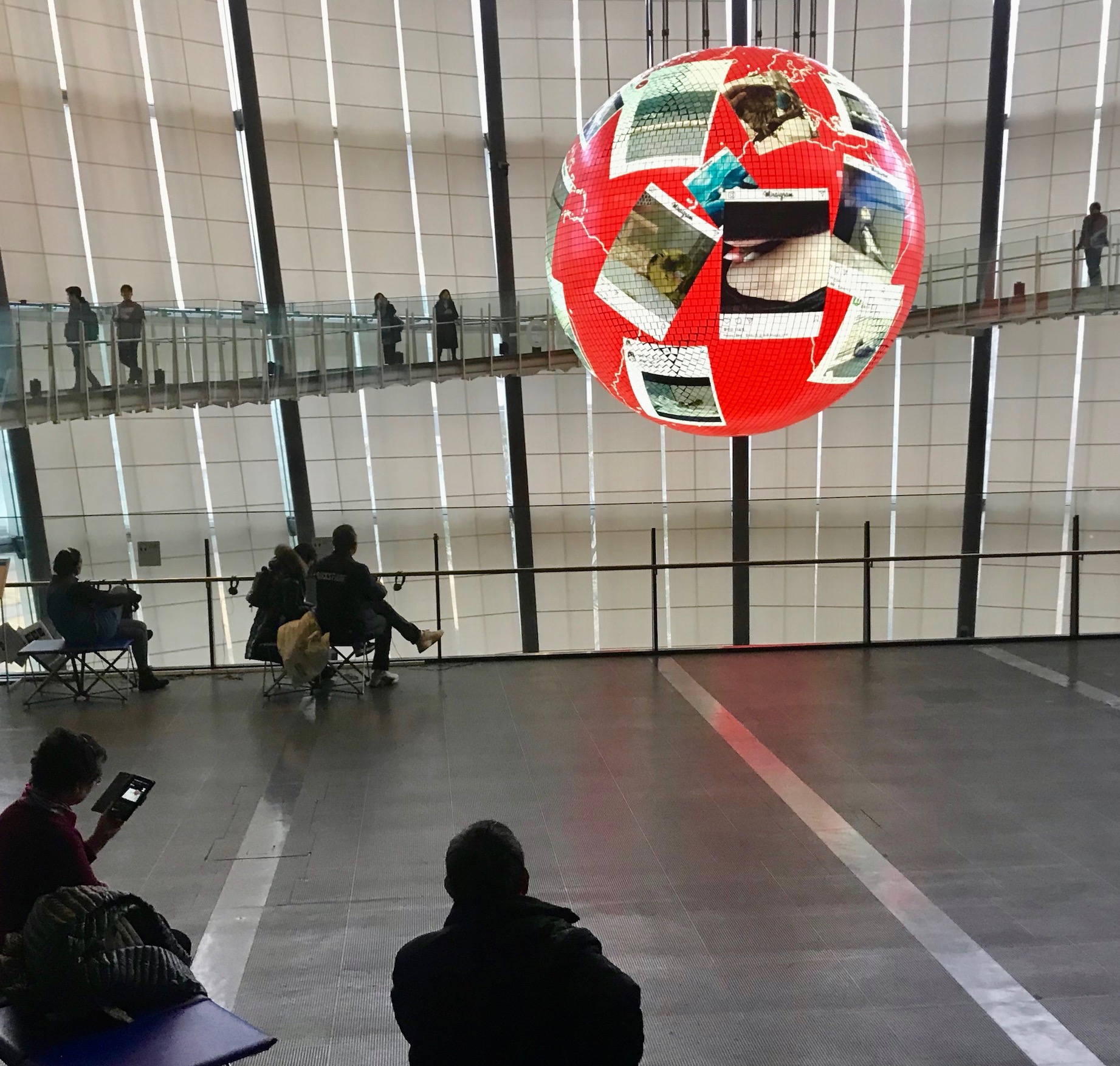 Want to get the full picture? Before reading this why not start with my article: Travel Report: Miraikan National Museum of Emerging Science and Innovation Part I.

February 2019. It had already been an amazing morning in Tokyo’s Miraikan: National Museum of Emerging Science and Innovation. We’d met ASIMO, the world’s most advanced humanoid and had a chat with Otonaroid, a teleoperated android keen to discuss anything from work, marriage and kids to languages and her abilities and inabilities as a robot. Next up was a walk across the museum’s visual centerpiece, the stunning Oval Bridge. 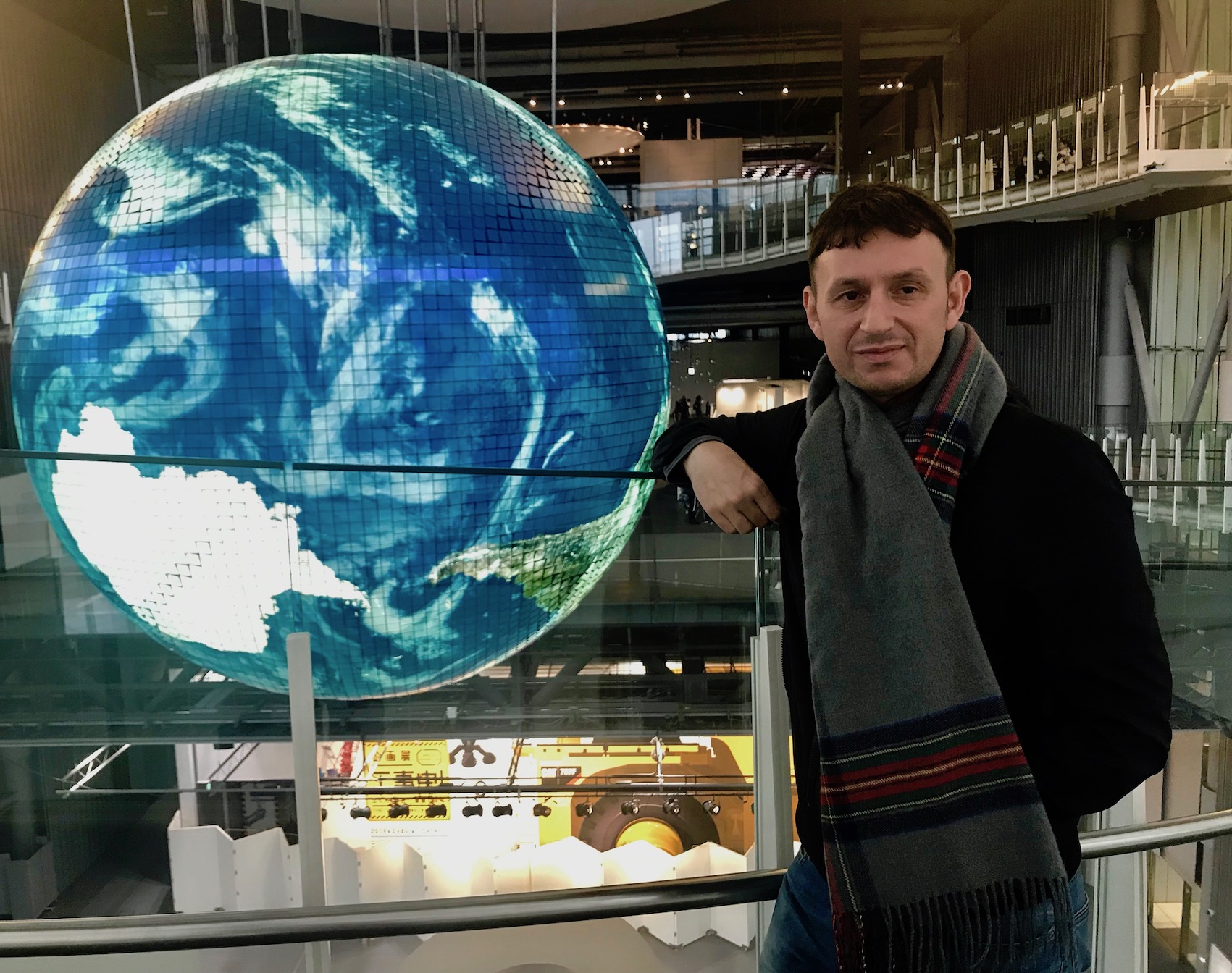 The Oval Bridge, Miraikan Museum of Emerging Science and Innovation.

Connecting the museum’s 3rd and 4th floors, The Oval Bridge also serves as a 360-degree view of visualized earth data through an analytical system called the Geo-Prism. Cross the bridge for fantastic views of the hanging globe and its ever-changing images.

The Oval Bridge’s Geo-Cockpit meanwhile provides all kinds of info, like the exact amount of rainfall to have hit the earth since they began recording data in March 2016. It was A LOT of water! Amusingly, there’s also a touch screen monitoring real time global Tweets. That afternoon it showed us how many million people were saying “good morning” and “good night” all over the world, along with the geographical breakdown. Interestingly, it also revealed that virtually nobody was saying “thank you”. If all the statistical stuff fails to capture your imagination you might prefer to simply take a guided UNI-CUB tour across the bridge! 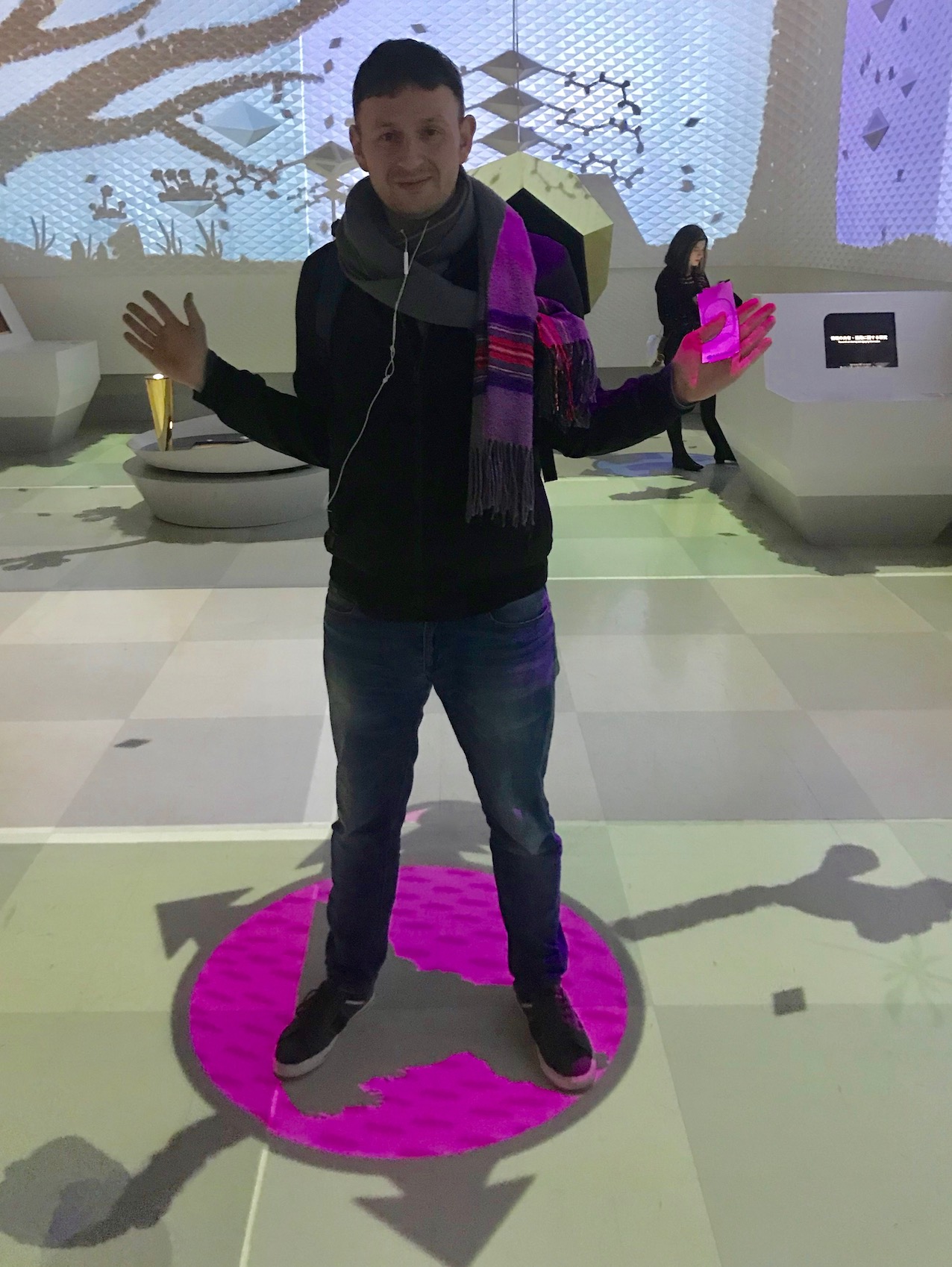 February 2019. Of all the head-scratching things to see and do at Miraikan, there was nothing perhaps more weird and wonderful than Songs of ANAGURA, an interactive spatial awareness exhibit said to explore the ideas behind “computers using human movement to predict social events and problems”. 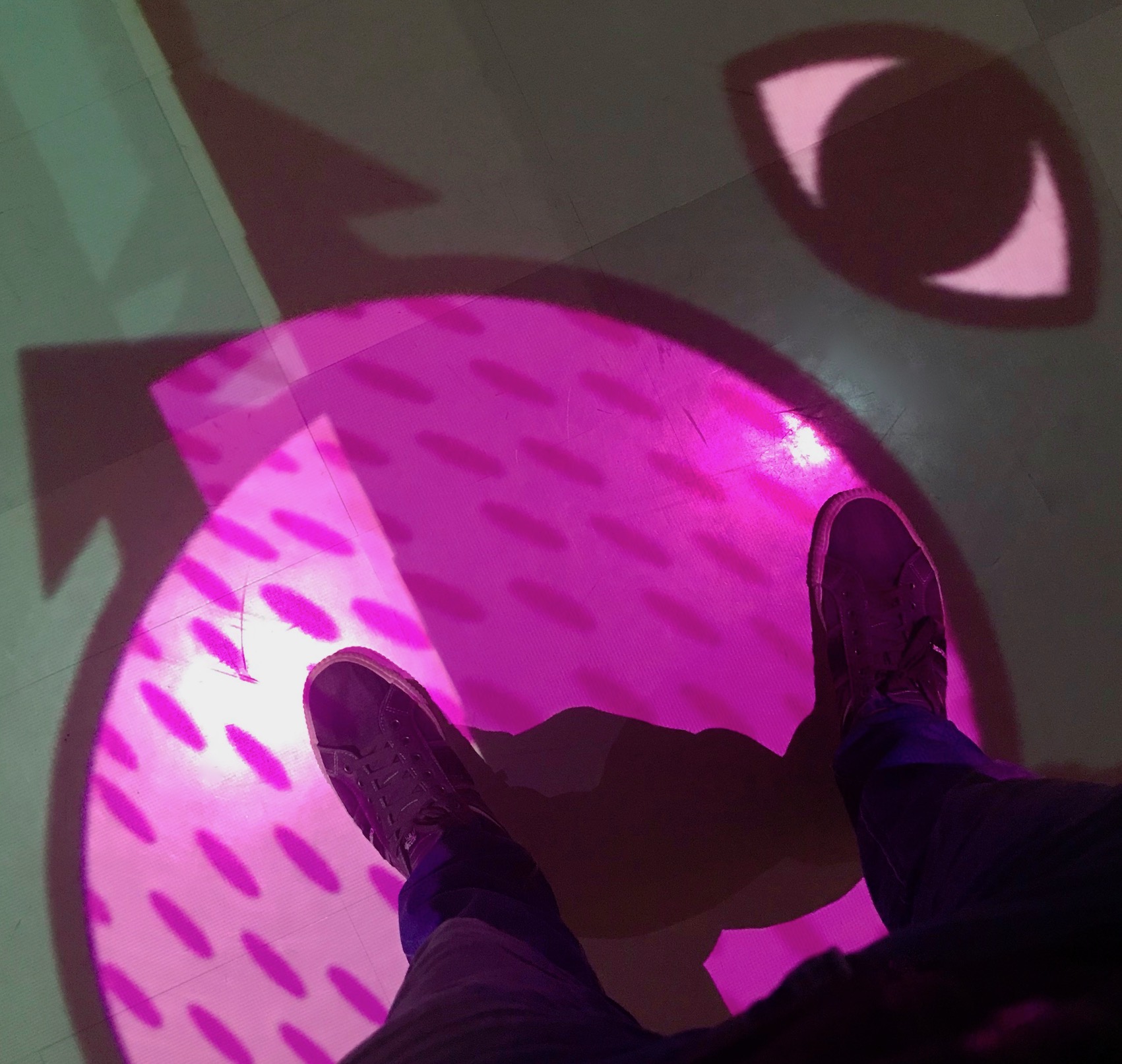 I’m not entirely sure what that exactly means but in terms of the exhibit you stick some basic personal information into a console and it generates a “Me”, a single-eyeballed monster shadow that is supposed to represent “your other self”.

February 2019. You and your “me” (projected directly under your feet) then get to walk around the colorful, digitalized world of ANAGURA. So just go exploring and try not to bump into other people. If this does happen you might lose your “me” and have to go back to a screen to get it regenerated. Which is exactly what I had to do when some unsupervised Chinese children ran about deliberately extinguishing people’s me’s. Only Wonderboy will remain privy to the scathing attack I unleashed on their mother. 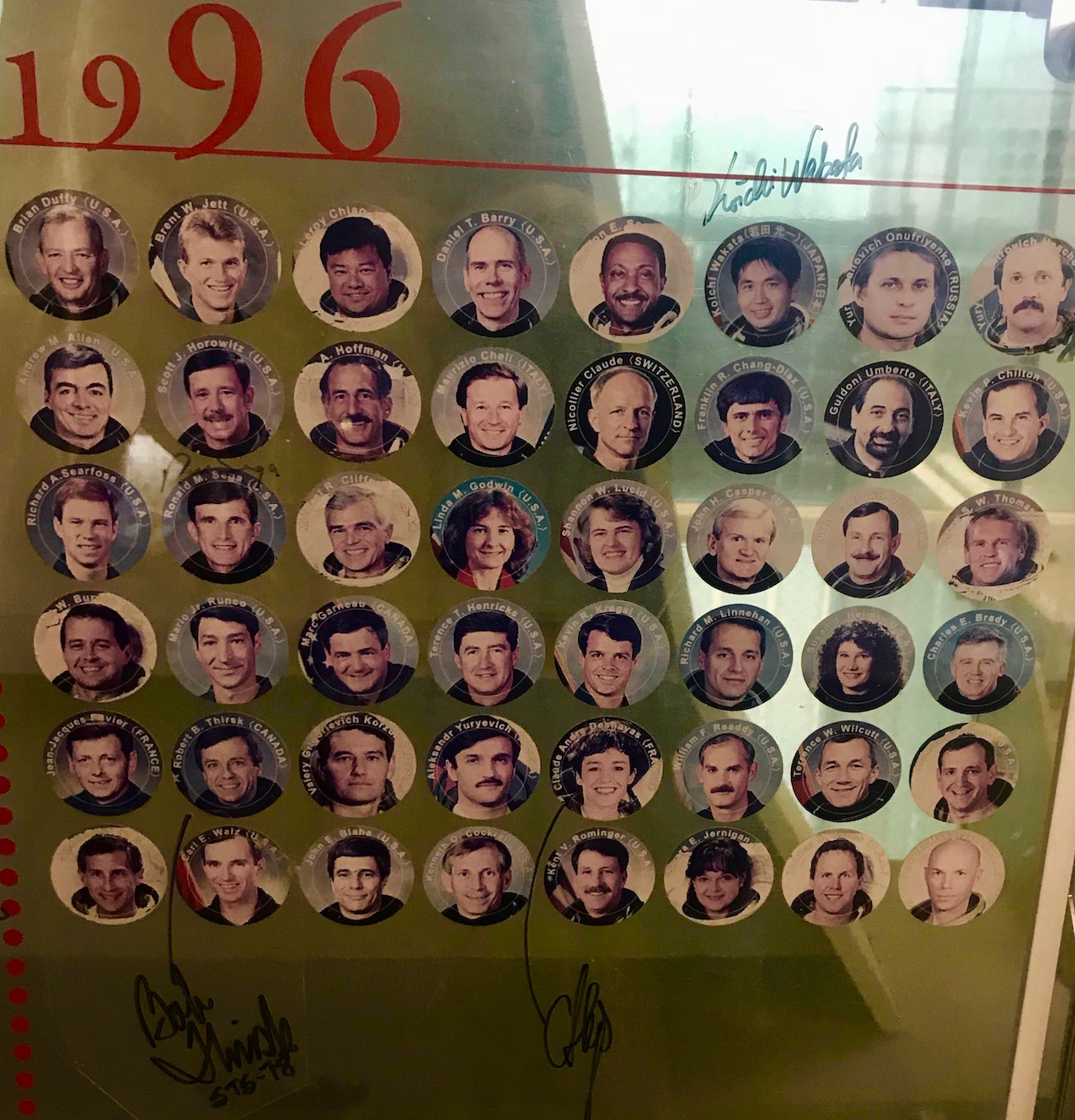 February 2019. On Miraikan’s 5th floor we were met by the Explore The Frontiers exhibition, which kicks off with a look at the history of space exploration. A very cool wall-of-fame style presentation provides an exhaustive overview of every single person who’s been into space year for year, from the first fruit flies, Albert the monkey and Laika the dog right through to 2019 and the most recent astronauts to be shot into orbit. 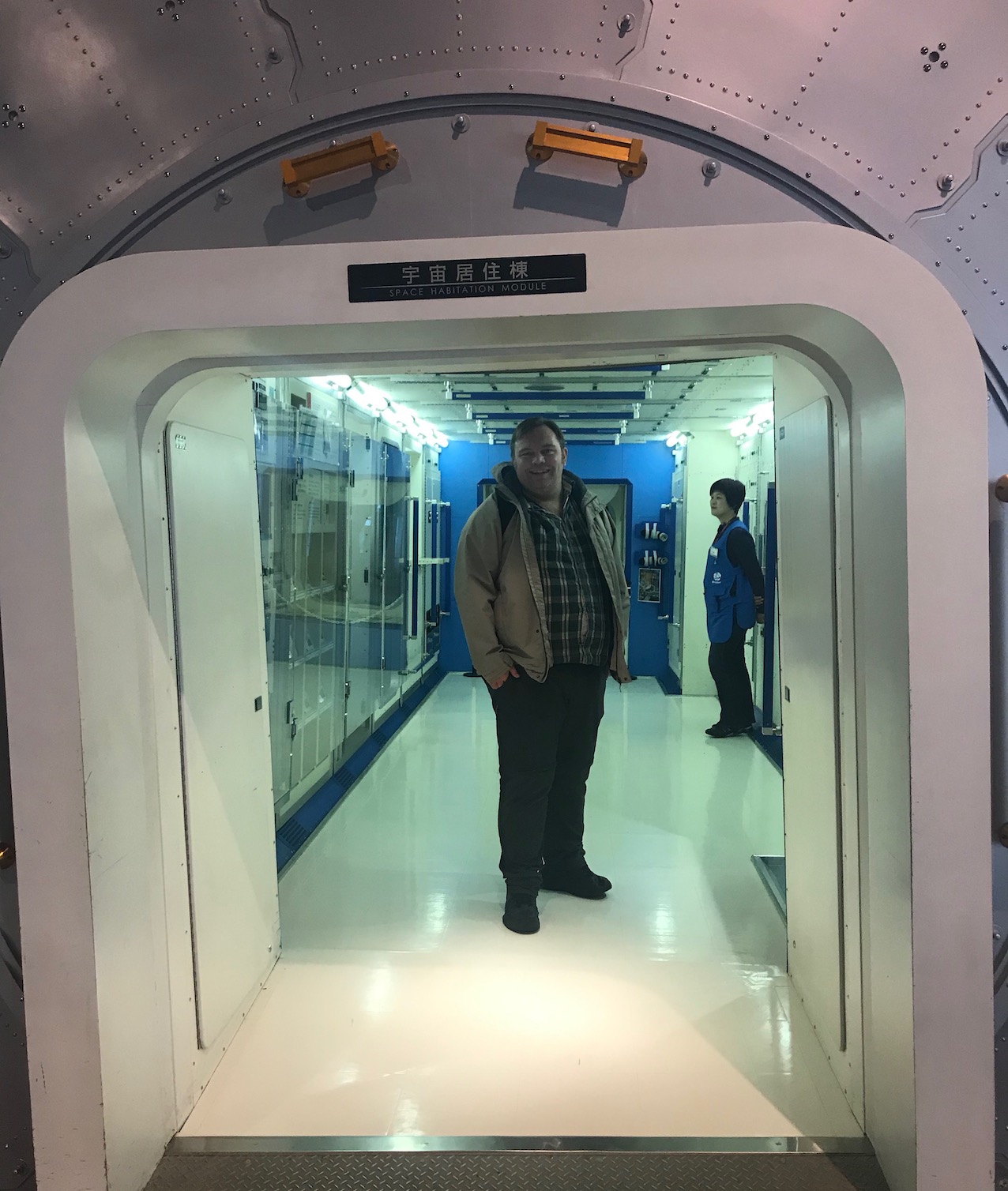 You can also check out an interactive ISS space station module exhibit, which sheds light on how astronauts conduct bioscience research, medical tests and astronomical experiments. And there’s an English-speaking attendant on hand to provide commentary. 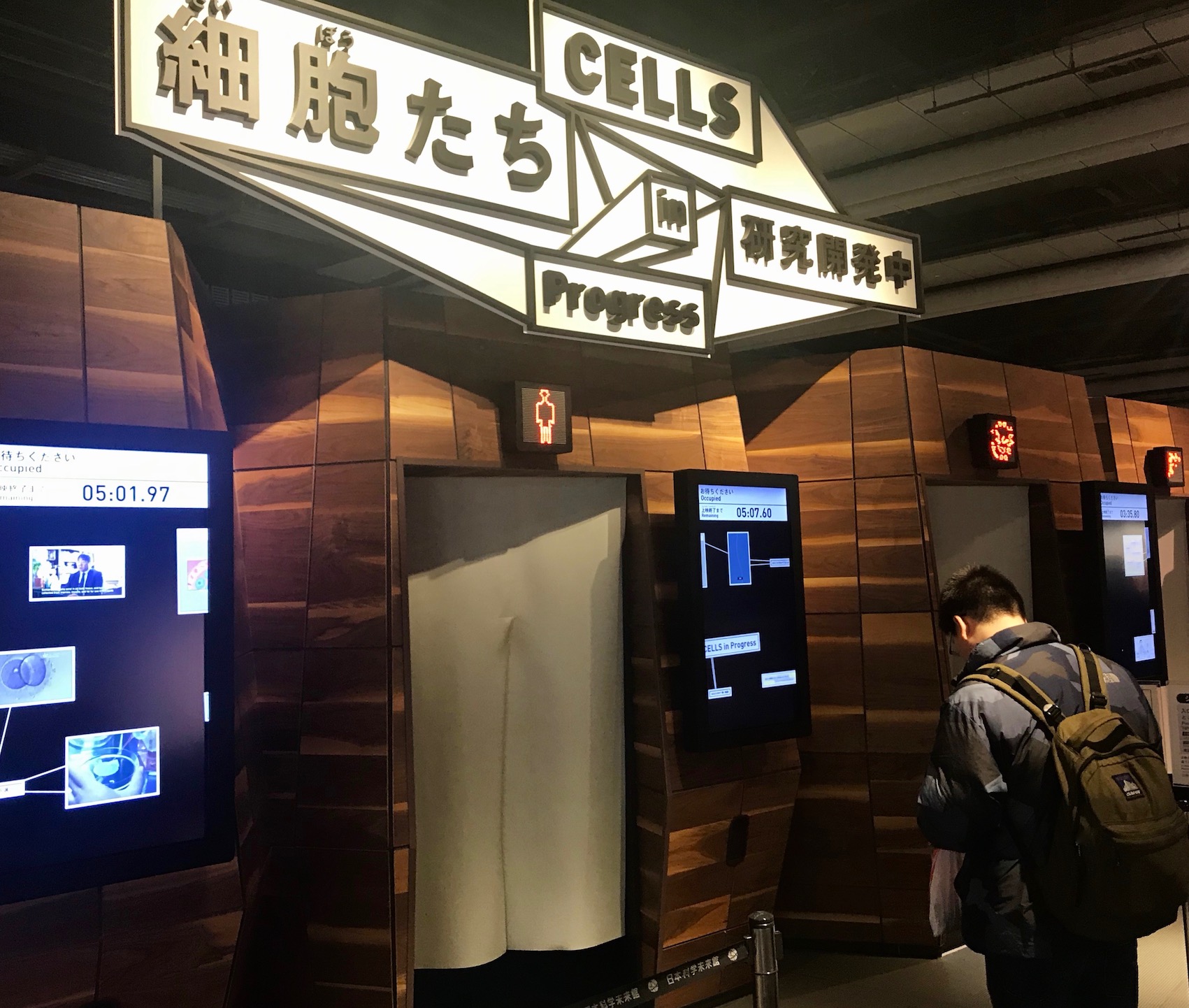 February 2019. A large chunk of the Miraikan’s 5th floor is also dedicated to the evolution of medical treatments, with plenty of questions posed about just how far we should be pushing science in order to preserve and extend human life. For me the most thought provoking of these exhibits was Cells in Progress, where I was encouraged to enter a private theatre booth to hear a story of how iPS Cell Research has helped, is helping and could continue to help people all over the world in a wide range of ways.

Stepping into the booth, I was told to consider the story I was about to see “as if it is your own story that may actually happen to you”. There are five booths and five different stories with five wildly differing outcomes. The short I watched ran for about 9 minutes and told the tale of a teenage boy suffering from a horrendous condition called Duchenne Muscular Dystrophy that reduces the average sufferer’s life expectancy to a depressing 30-40. Whilst the video obviously champions the use and development of iPS cell research, it also makes it clear that for this teenager any benefits would only be in place for the next generation. Sobering stuff.