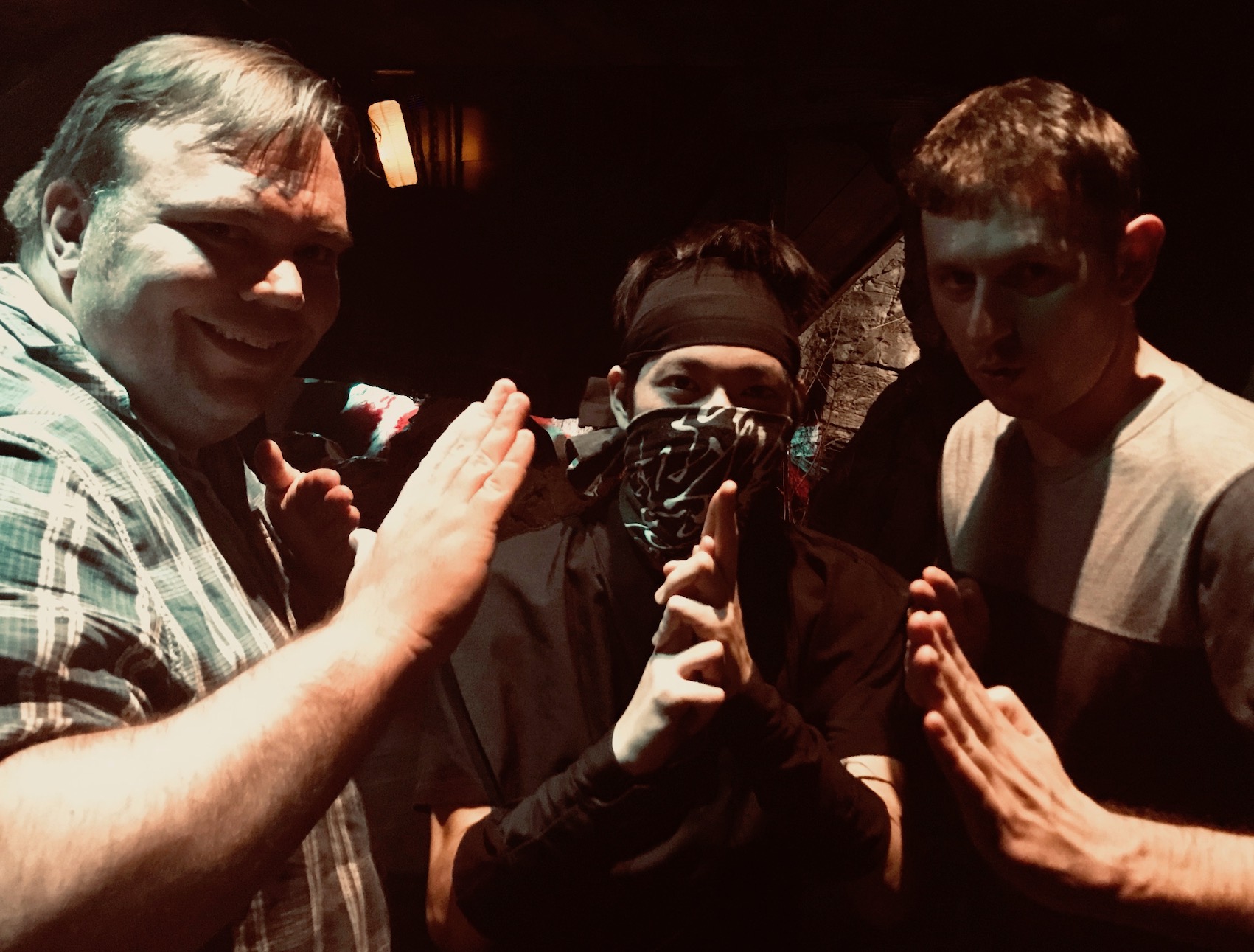 February 2019. Of all the amazing themed cafes, bars and restaurants Wonderboy and I were lucky enough to visit throughout our Tokyo adventures, for me the big, shiny bejeweled crown goes to the amazing Ninja Akasaka, aka The Ninja Restaurant in glitzy Ginza district. They also win the prize for Best First Impression, as we found ourselves collected from reception by an excitable, partly masked ninja. “Come with me!” he growled and off we went through an insane assault course that led us deep underground into the heart of The Ninja Restaurant. There were narrow, winding staircases, a broken bridge and secret doorways before we eventually came out into a mazy cave complex of iron-bar-clad dining cells. It was into one of these lantern-lit rooms that we were deposited by our nimble-footed guide and left momentarily to take in our surroundings. Whoa… 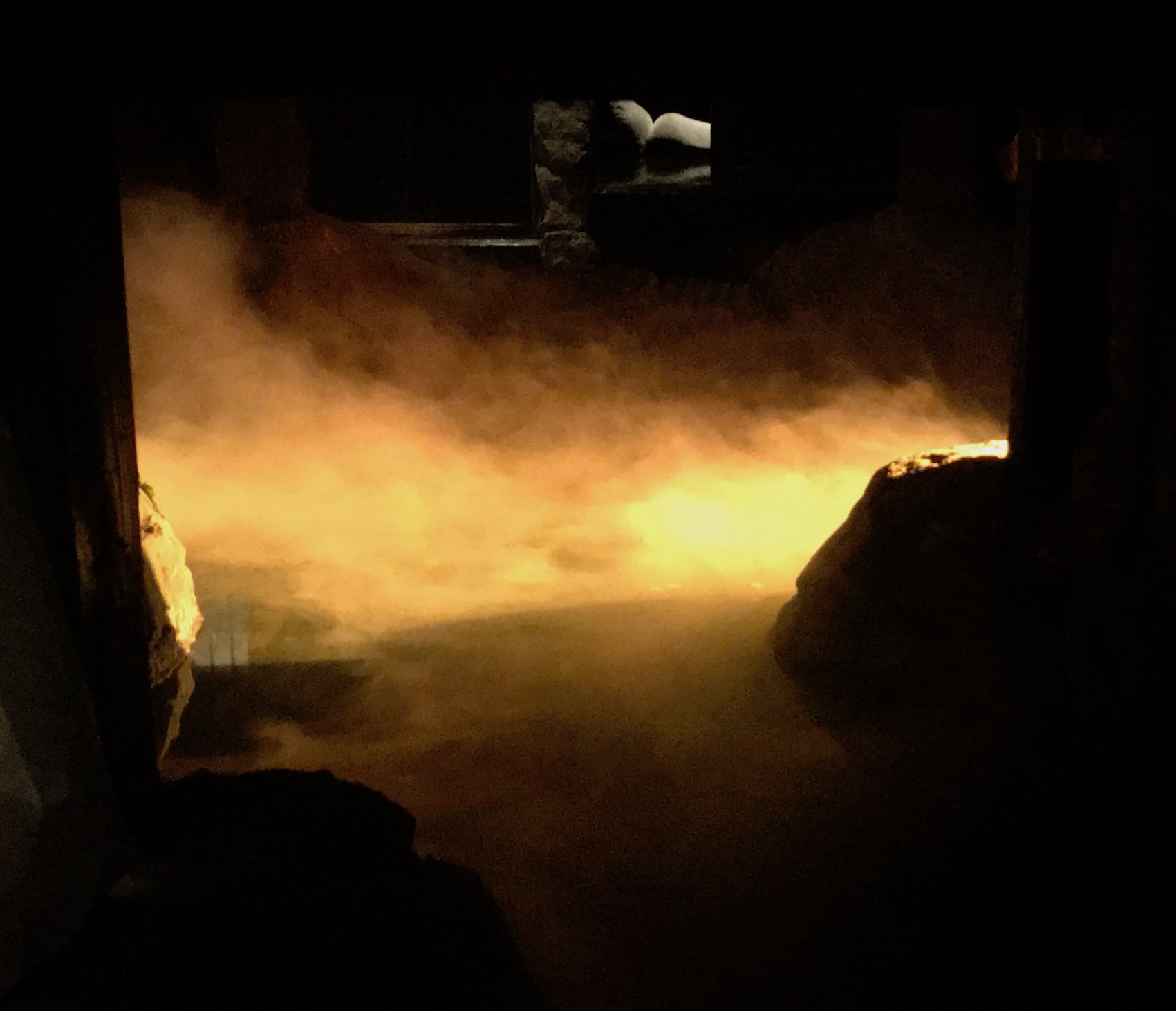 February 2019. Our large, dark wooden table took up most of the cell; one side lined with the iron bars and a massive sliding door, the other a craggy stone wall with an open peephole stretching out into the dark, spooky depths of a misty river. Not your average restaurant!

Ordering a couple of Asahi draft beers, we sat back breathing in the vibe as a flurry of Ninja waiters filed back and forth down the corridor. Our Tasting Course set menu that evening had been ordered online weeks before our visit, which is how the ultra efficient Ninja Restaurant rolls. And before too long the first course arrived, a beautifully presented vase of Nnja-blade Shuriken Grissini with Pork Pate. 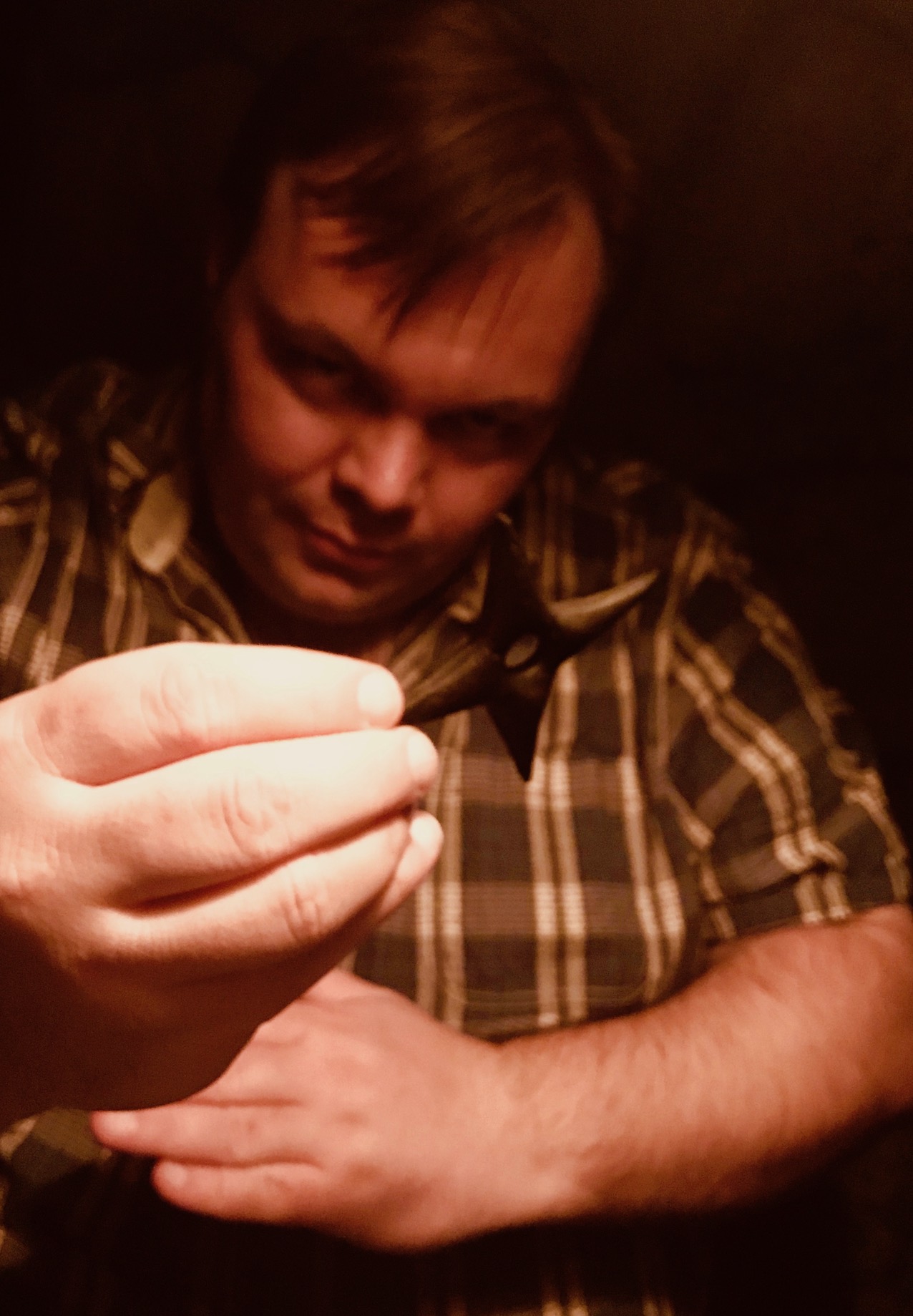 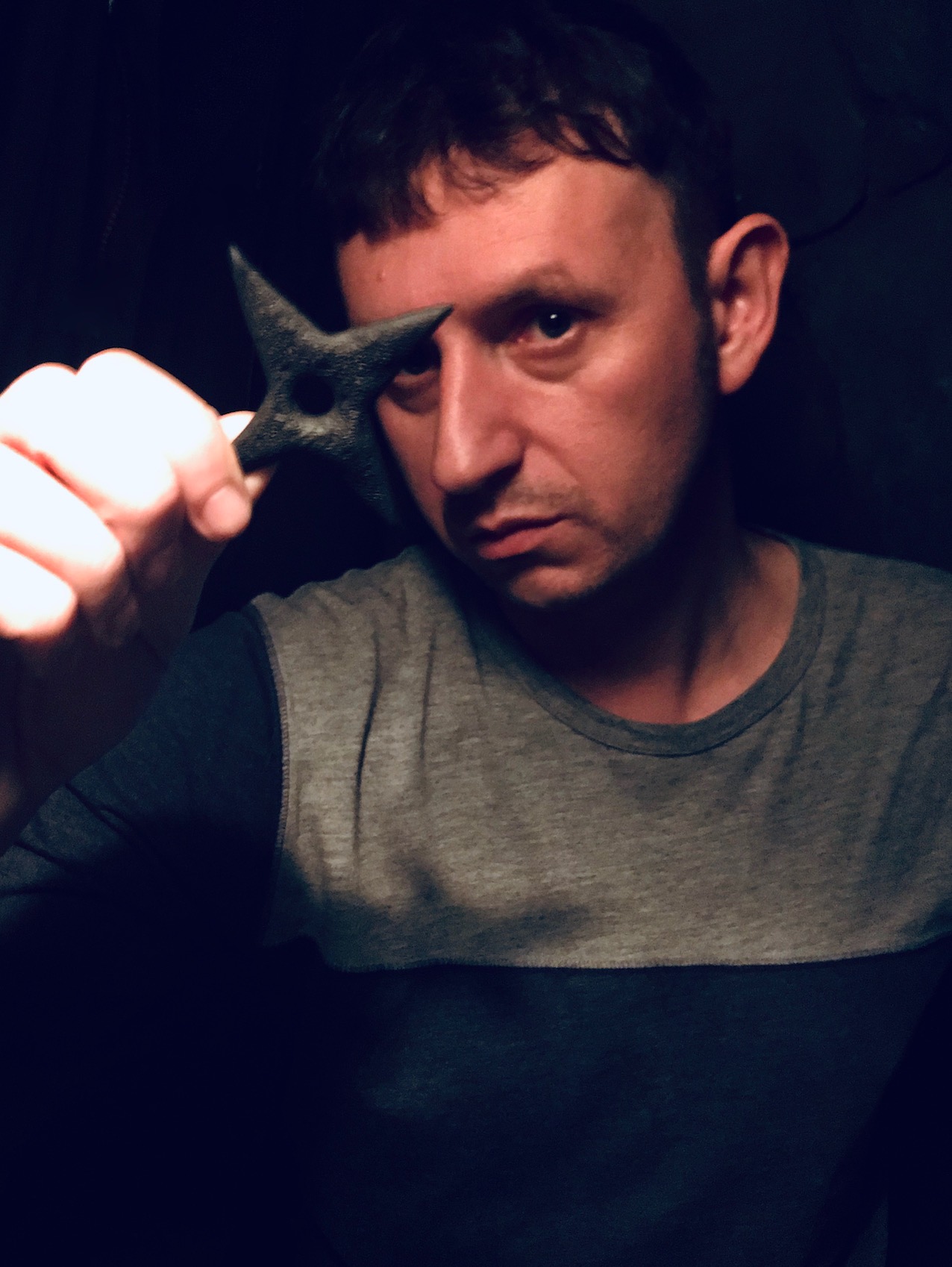 “Don’t throw them!” quipped our Ninja server. He needn’t have worried, as dishes at Ninja Akasaka don’t come cheap, so we weren’t going to waste a scrap. Instead we made do with a few photos where Wonderboy and I attempted to out-badass each other. Dammit, I think he won. 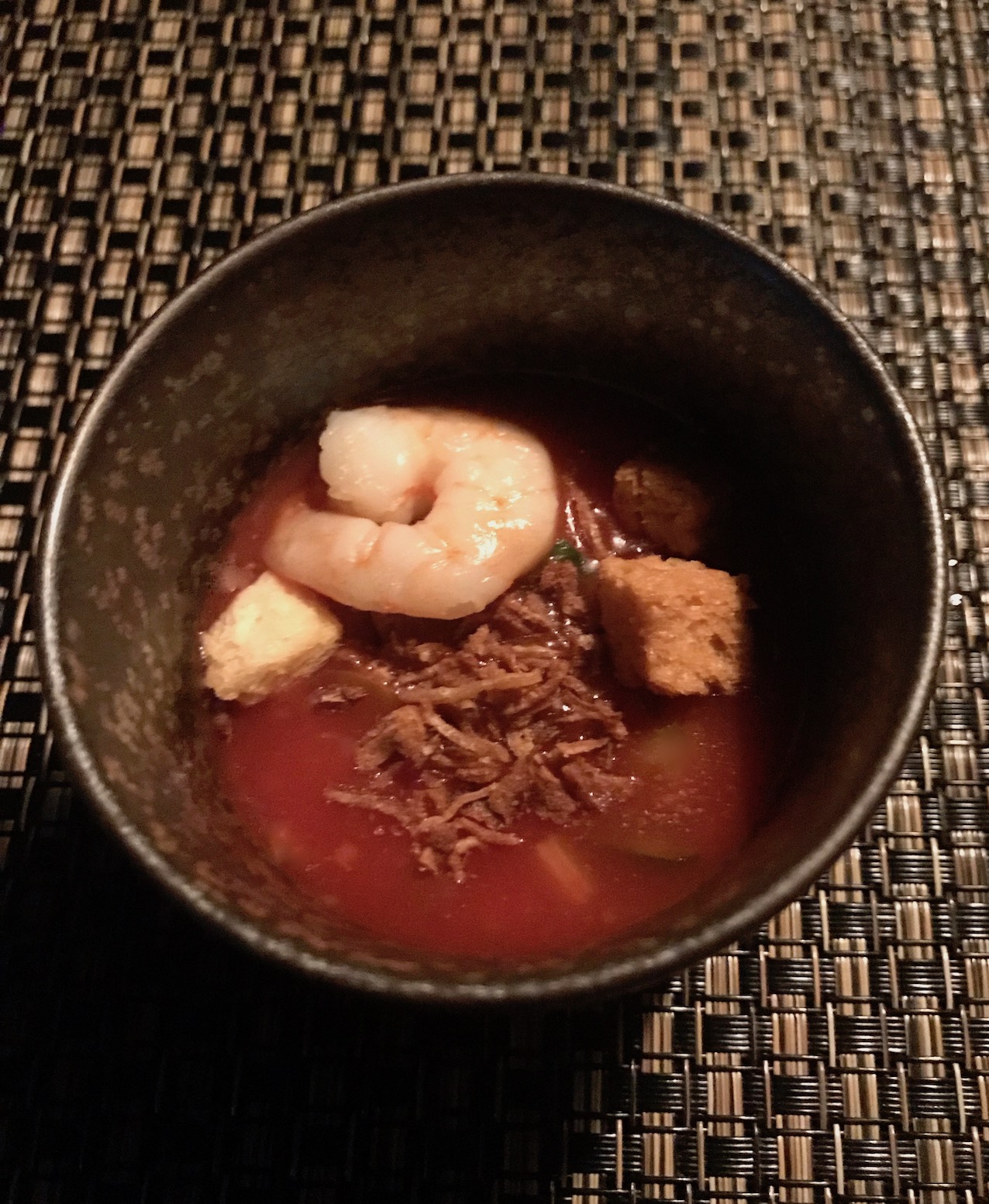 February 2019. From there the Ninja Restaurant’s dishes came thick and fast, expertly riding the fine line between efficiency and the unwanted territory of feeling rushed. At first glance we were commenting that everything seemed comically small, but then there were plenty of them and they were all delicious, always leaving us keen to see what was coming next. 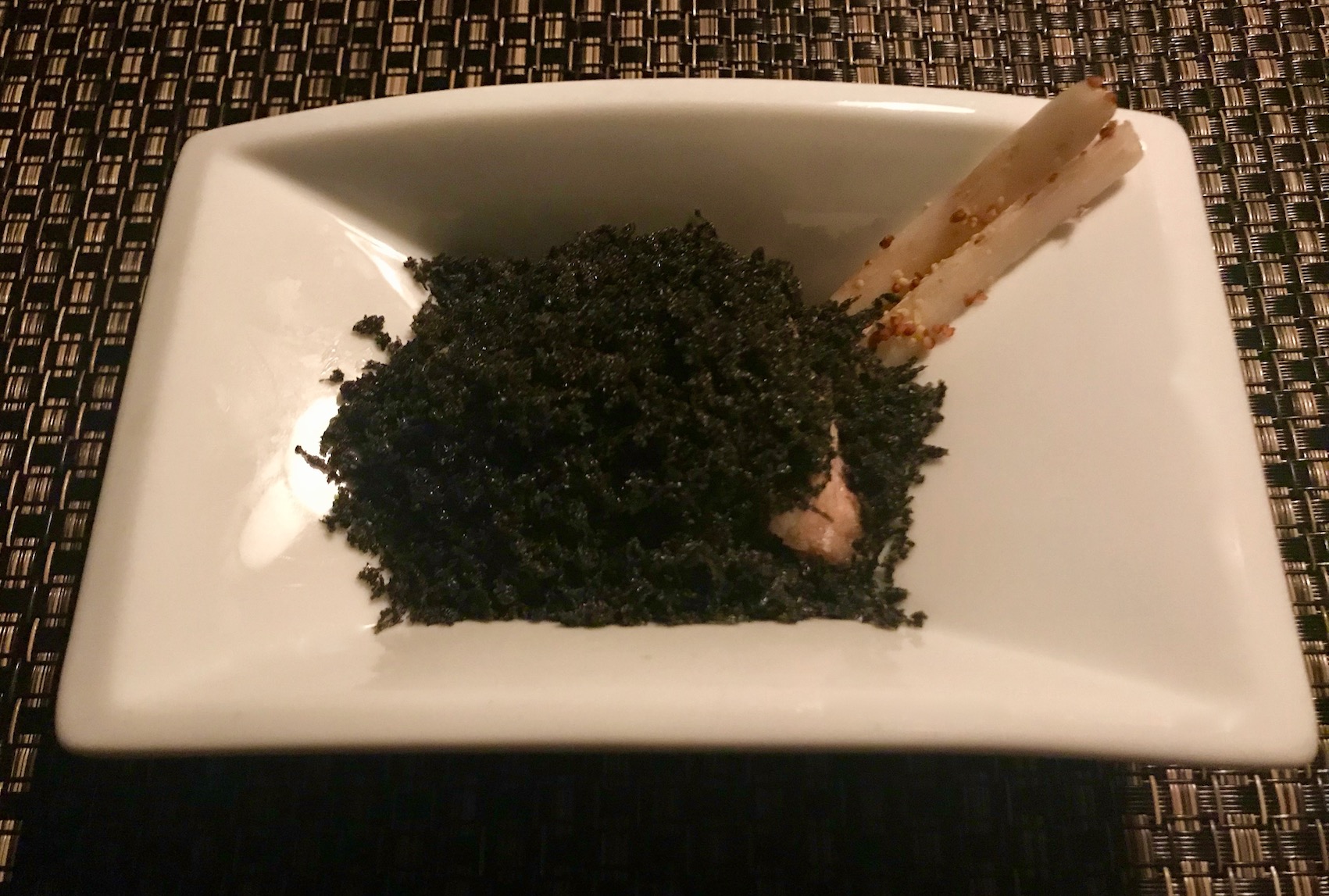 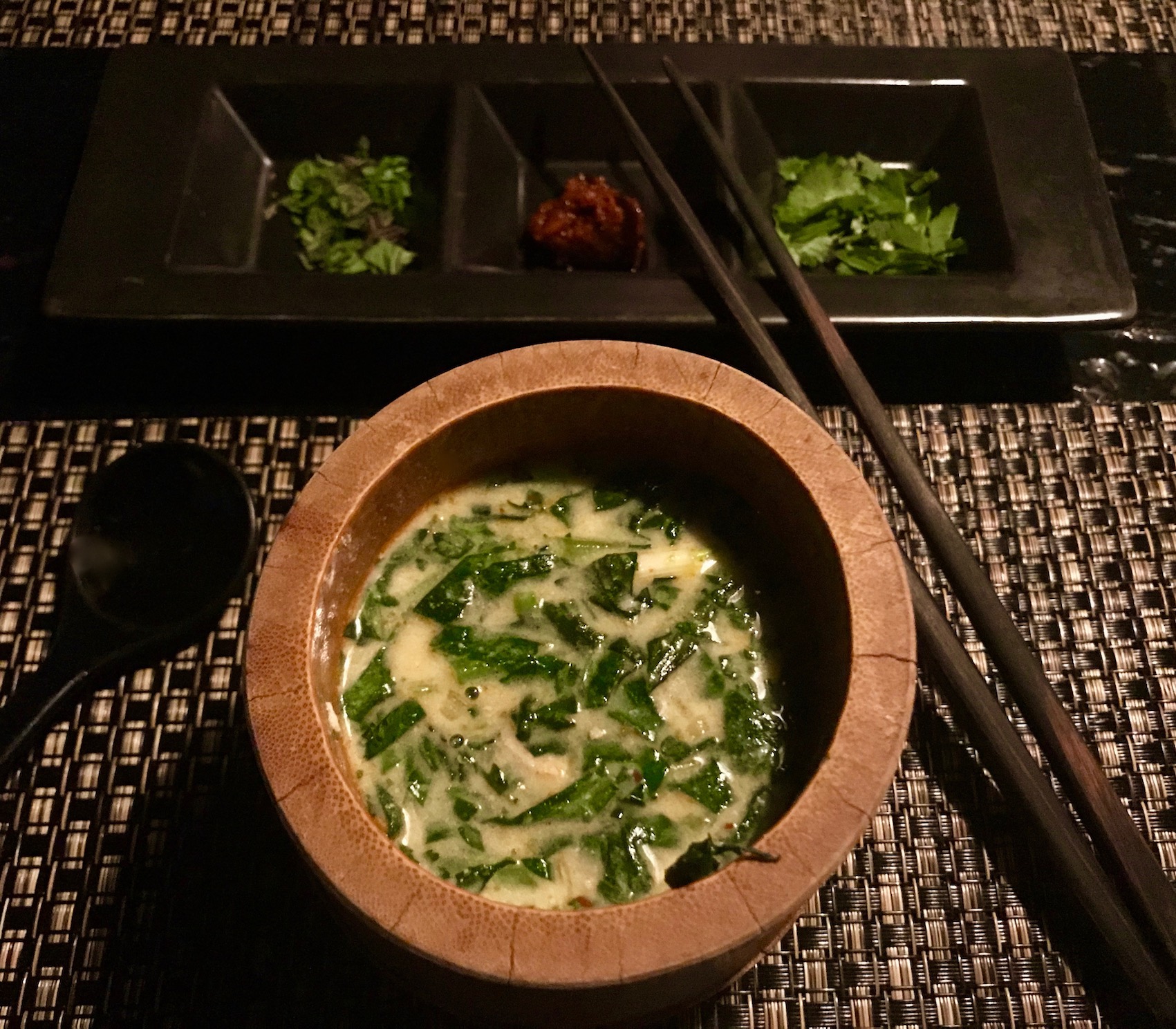 And so came and went a wonderfully rich Prawn Gazpacho, a Chicken Fritter in Ninja-style Salty Fried Breadcrumbs and a wondrously creamy Stone-boiled Japanese Soup. The photos fail to do any of it justice. 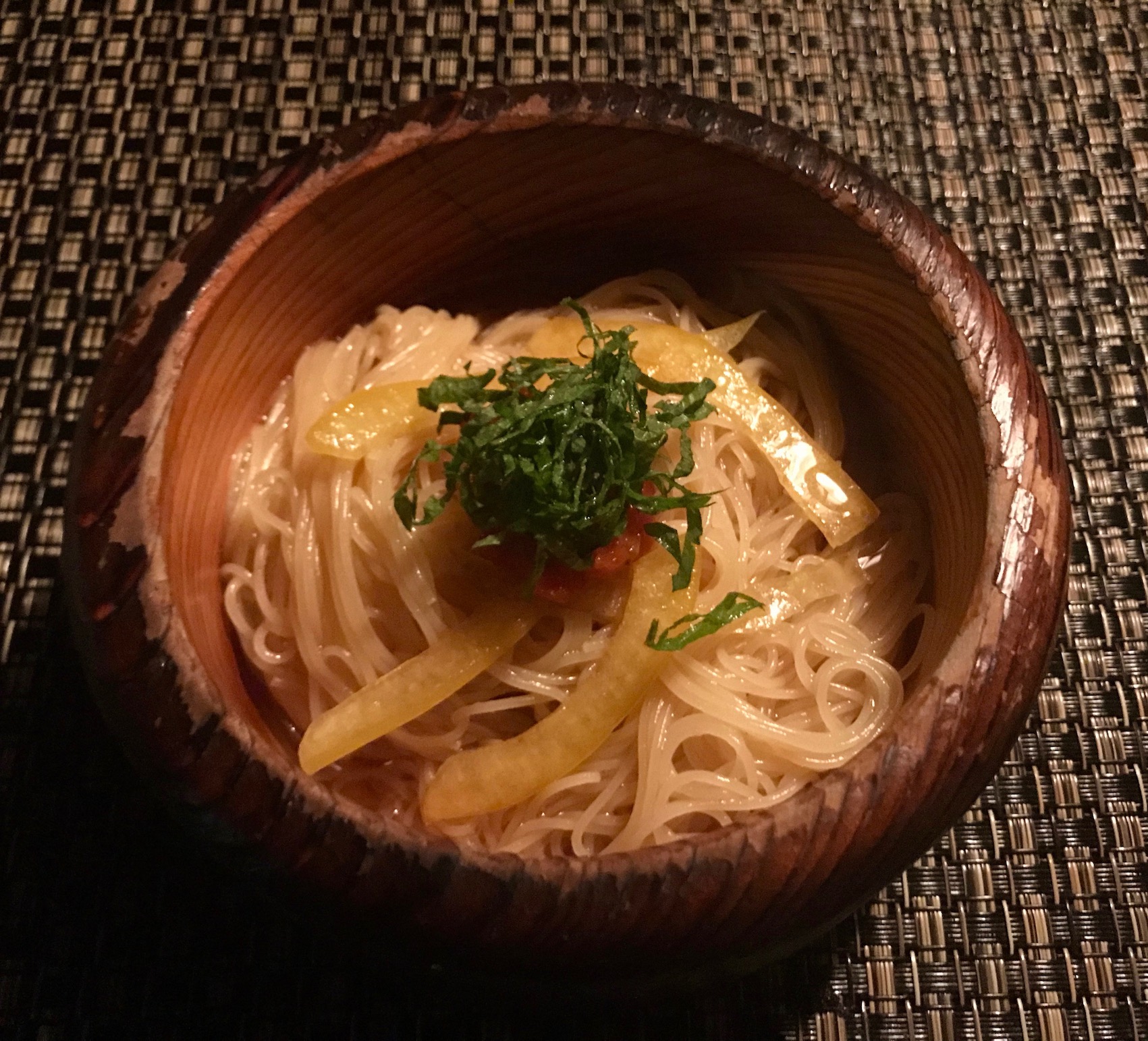 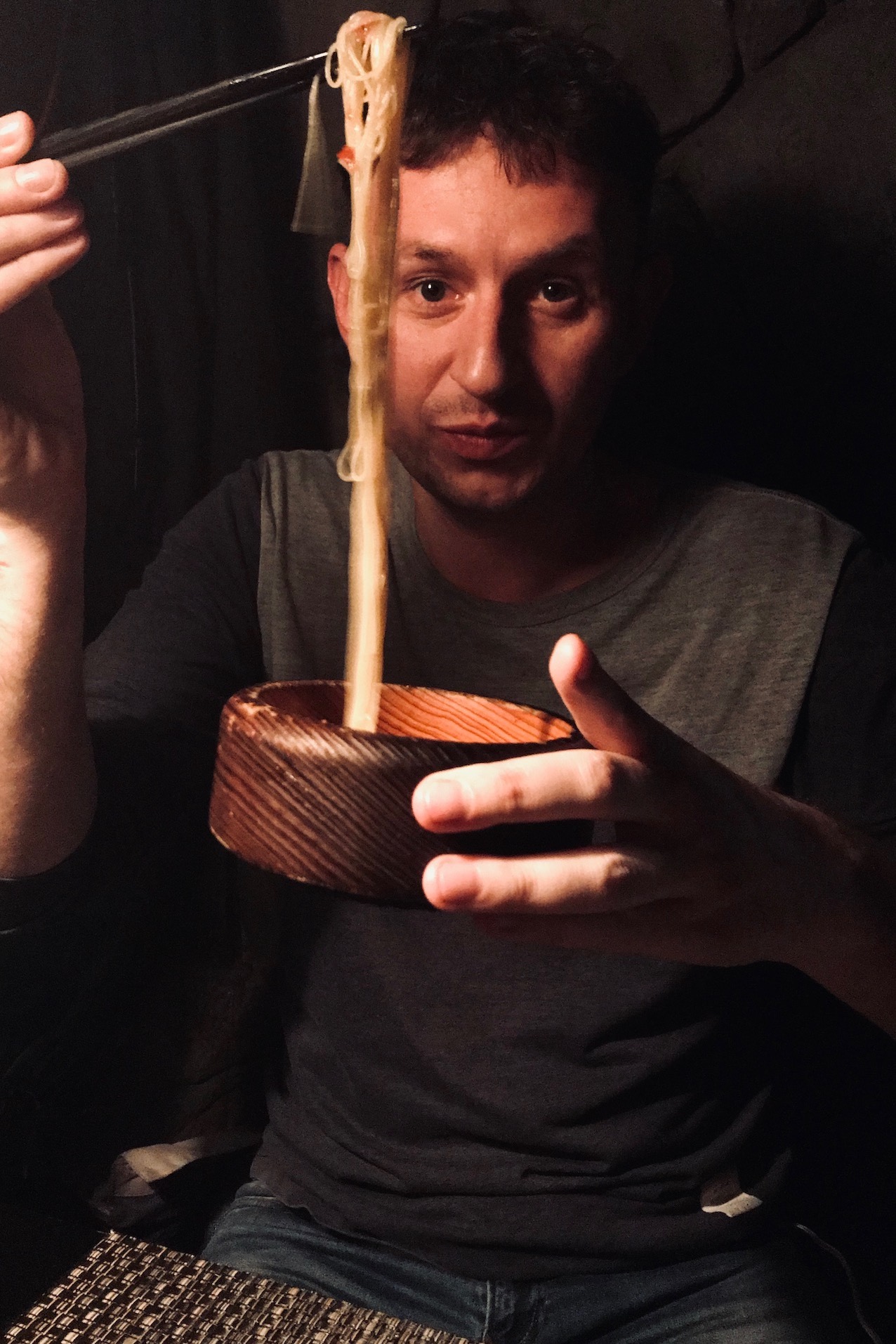 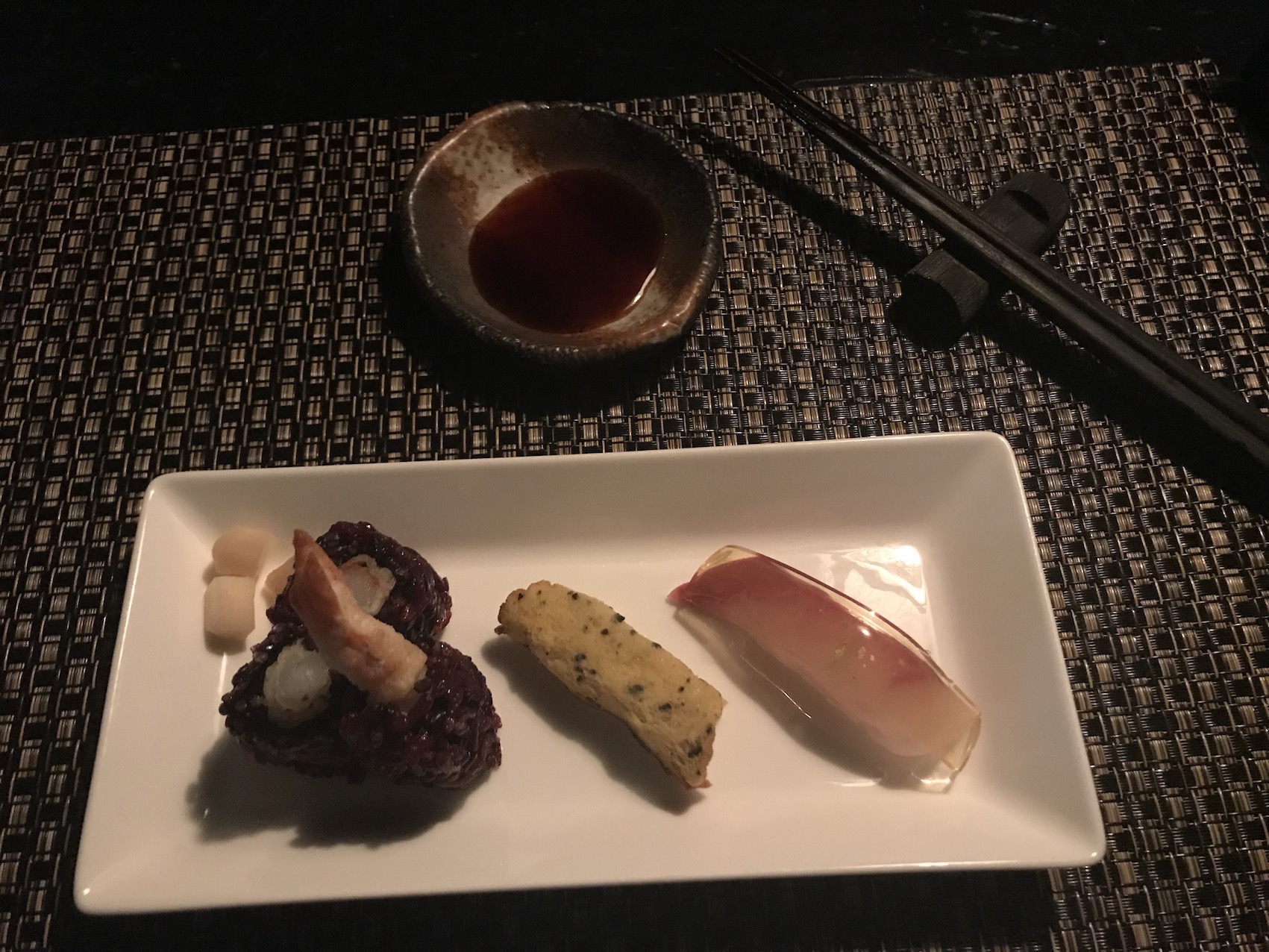 I think I can speak for Wonderboy too when I say that all of the Ninja Restaurant’s dishes were top notch that evening. The Italian capellini was soft, stringy and flavorsome, sat soaking in a tomatoey sauce, while the sushi of the season platter was every bit as tasty as it was artful. 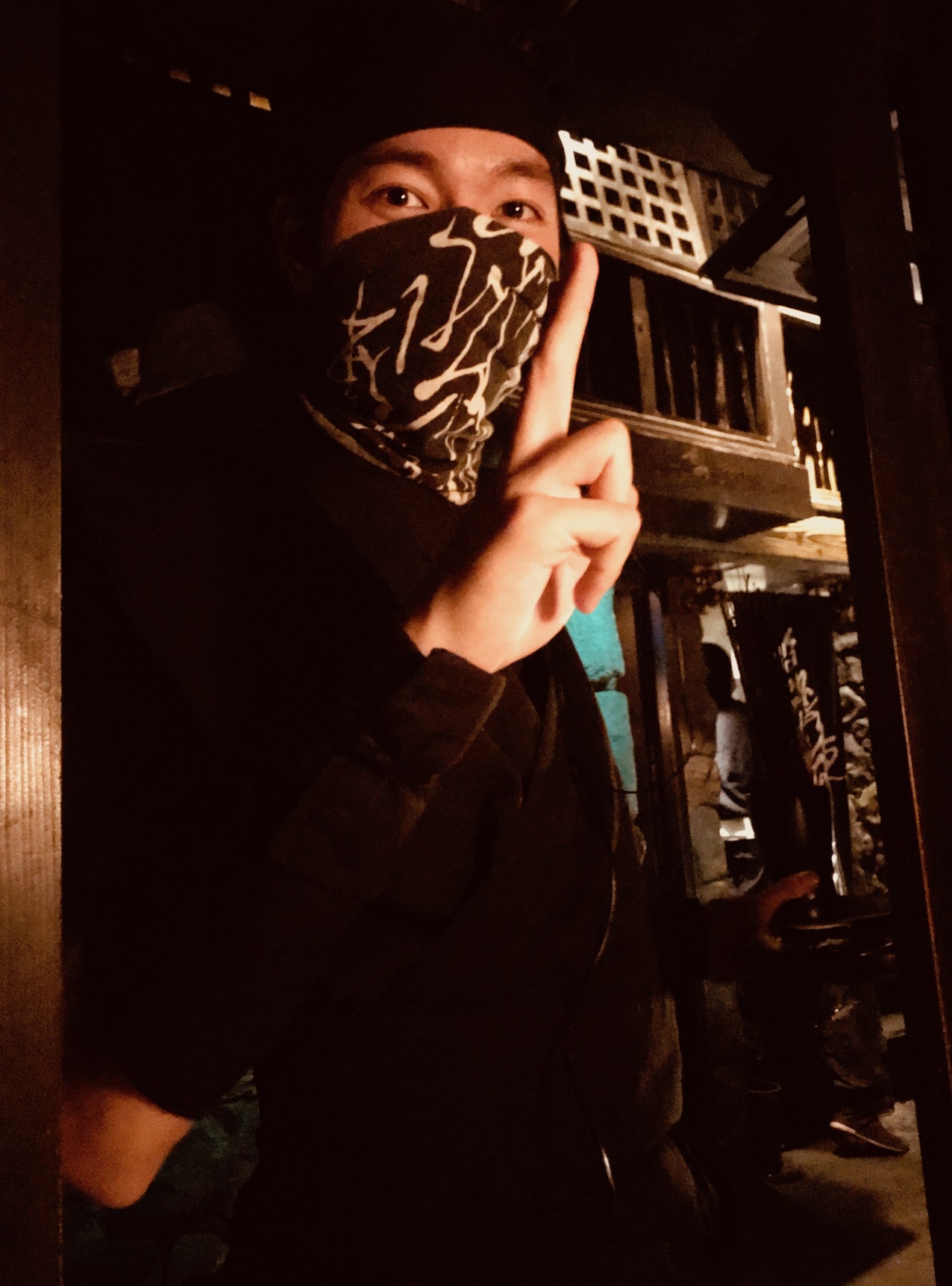 Look at him, he just KNOWS I’m gonna go crazy for the main. 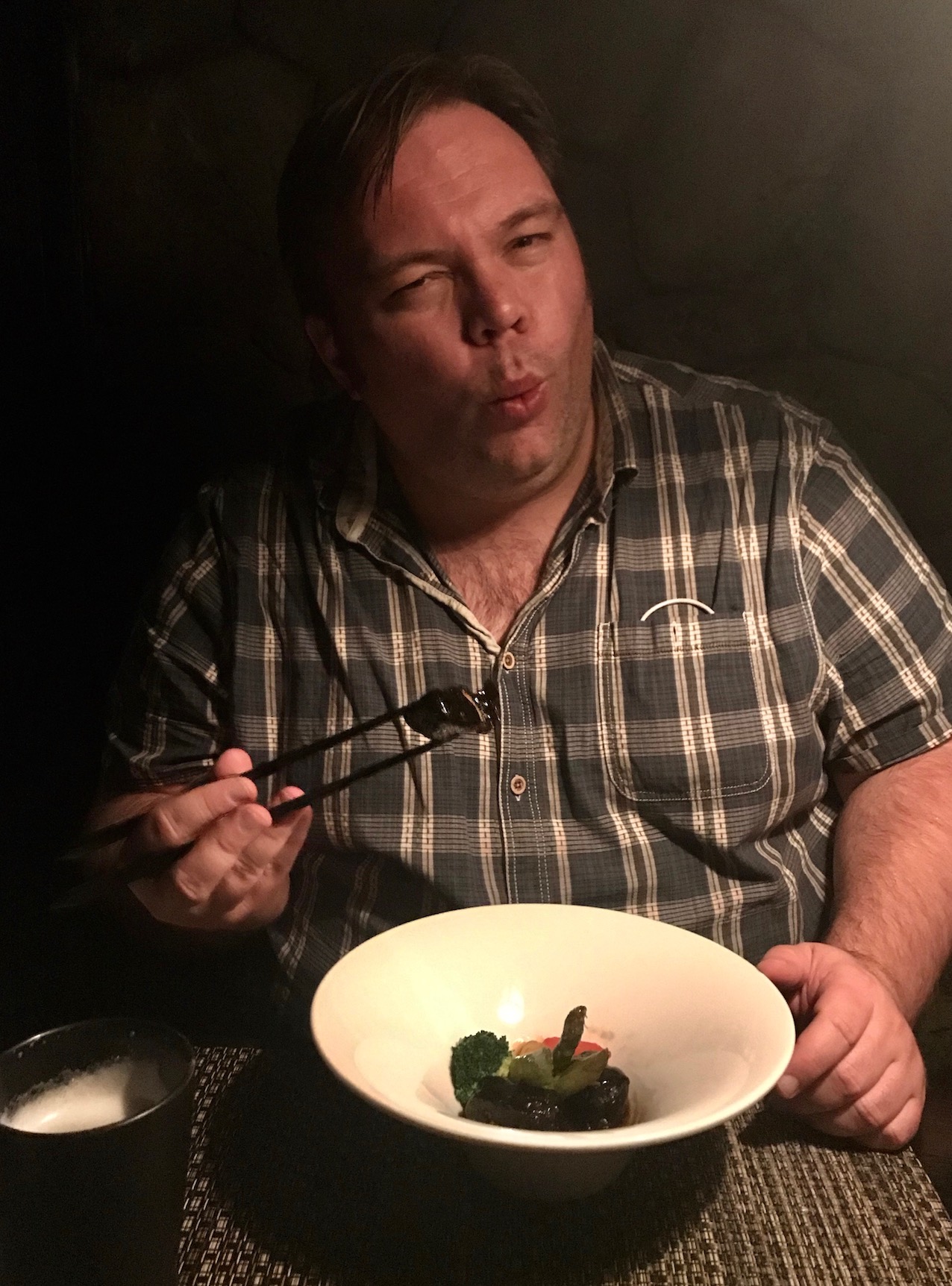 As if everything so far hadn’t been good enough, The Ninja Restaurant smartly held its big guns back until the end with an absolutely magnificent caramelized sweet and sour pork. Served with broccoli, peppers and sweet potato, my only complaint is that there wasn’t more of it! 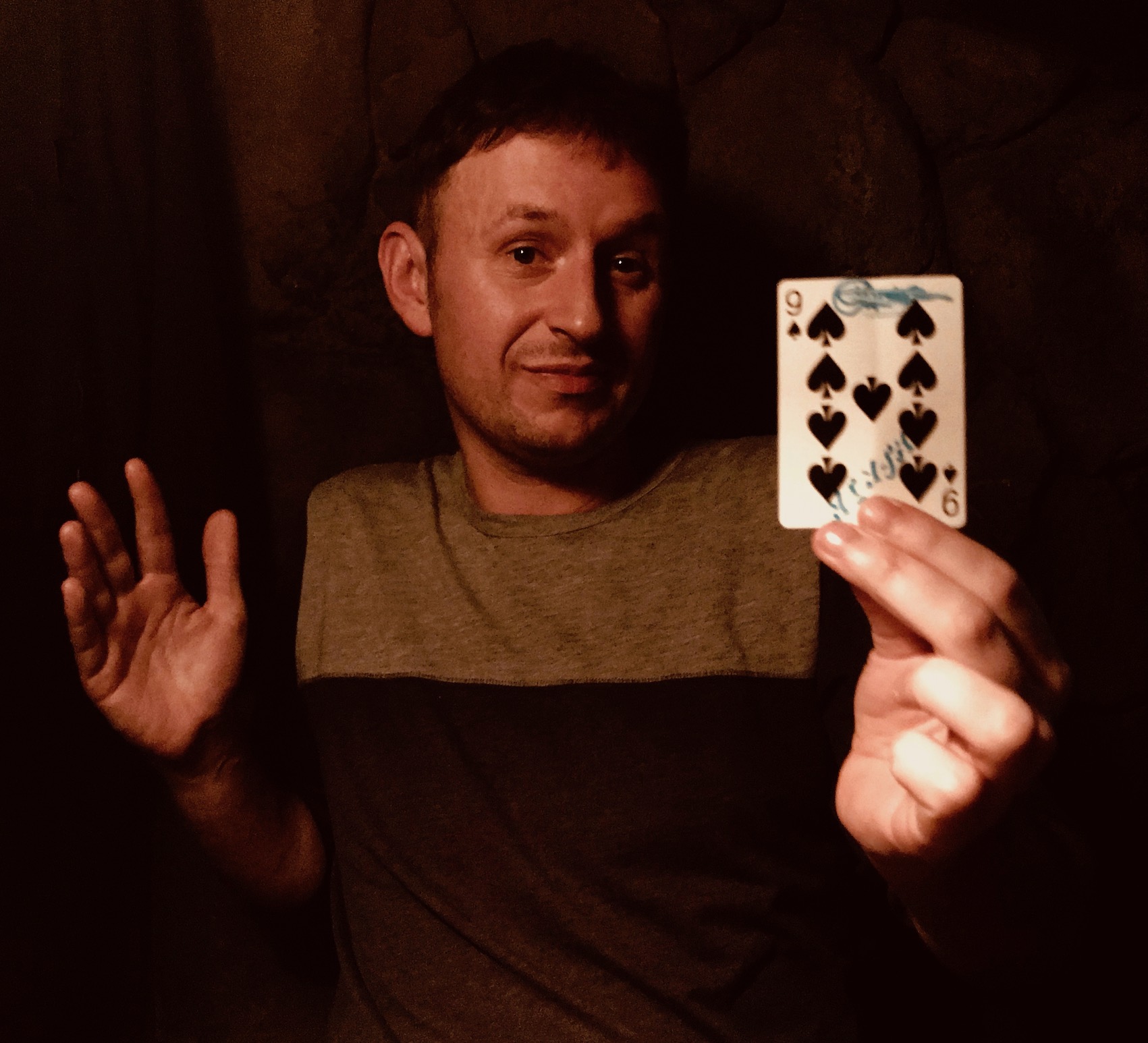 It was also around this time that we were treated to a quite fantastic magic show, delivered right to our table by Mr. Ninja magician extraordinaire. I’m generally cynical and unimpressed when it comes to magic, but this guy’s stuff was awesome, with cards literally disappearing and reappearing all over the place right in front of my disbelieving eyes. Proper unexplainable sleight of hand shit! All part of the compliemnetary Ninja Restaurant experience and I even got to keep the nine of spades he’d asked me to sign as part of his performance. 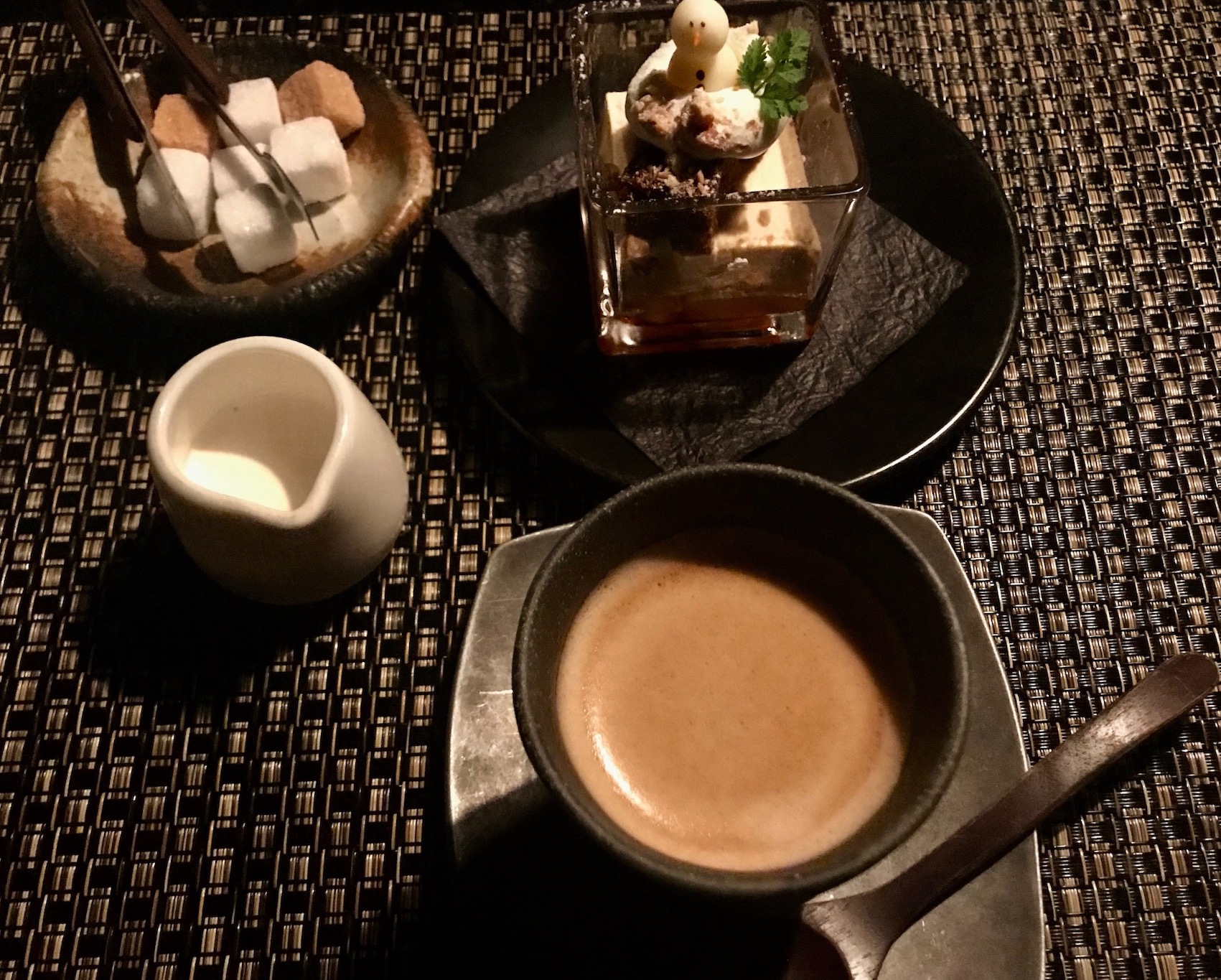 Coffee and tiramisu, The Ninja Restaurant.

And then finally it was time for dessert, a just perfect cup of coffee with milk and a little pot of tiramisu. By this point we were pretty stuffed, making a mockery of our early observations regarding portion sizes. When the bill came it was a far from negligible 16,113JPY (£112/€130/$145), but in my book worth every penny. It’s also worth pointing out that at 5.700JPY per person the Tasting course set menu that is the cheapest option on offer. If you wanna go bigger and bolder, they have even more impressive, not to mention expensive, sets. 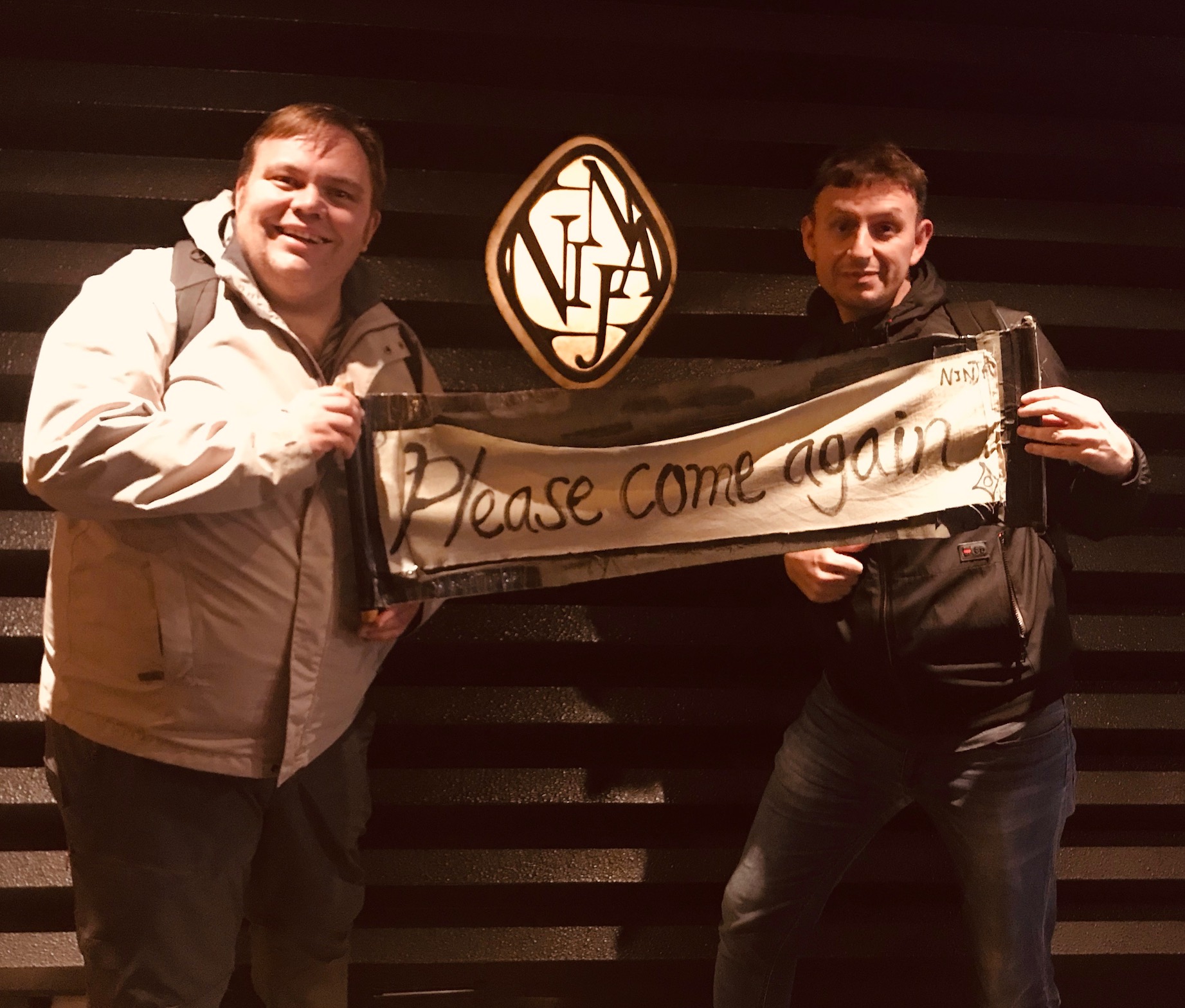 Ninja Akasaka Tokyo is located a short walk from Akasaka-Mitsuke Subway Station. Take Exit 10 and cross the road over to Tokyu Plaza. The restaurant is right next to the big Tokyu Plaza sign, look out for the white N.J.N.A. sign in front of the otherwise featureless black exterior. Check out their website for more info.