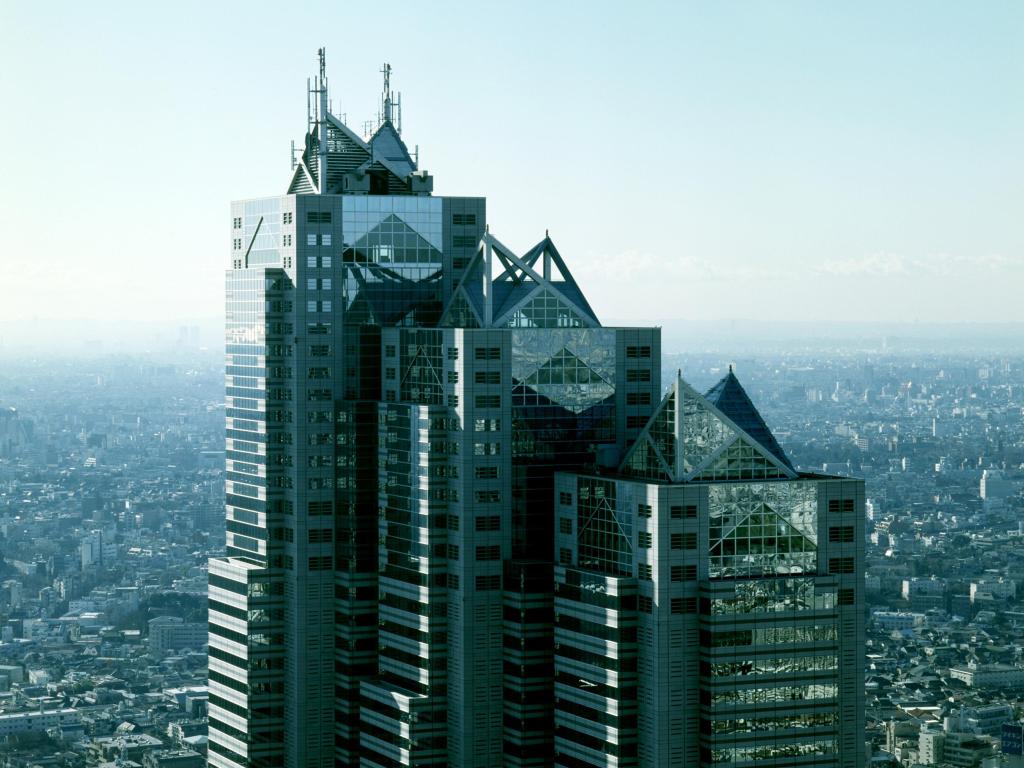 February 2019. I’m not even a tad embarrassed to admit that I felt an army of butterflies doing cartwheels in my stomach as Tokyo’s immense, 52-story Shinjuku Park Tower came into view. As anyone who knows me well can firmly attest, I’m not exactly the most excitable person in the world. In fact, one might describe me as a bit of a cynic… the prince of sarcasm… prone to the odd bout of half-glass-empty-itis. But sometimes you just know that you’ve arrived at a major life event… a dream-fulfilling moment of glory that deserves to be celebrated and savored. And as Wonderboy and I found ourselves trotting up to the entrance doors of Shinjuku Park Tower, I made sure to take a silent, internal moment to remind myself that yes, this was one of those occasions. 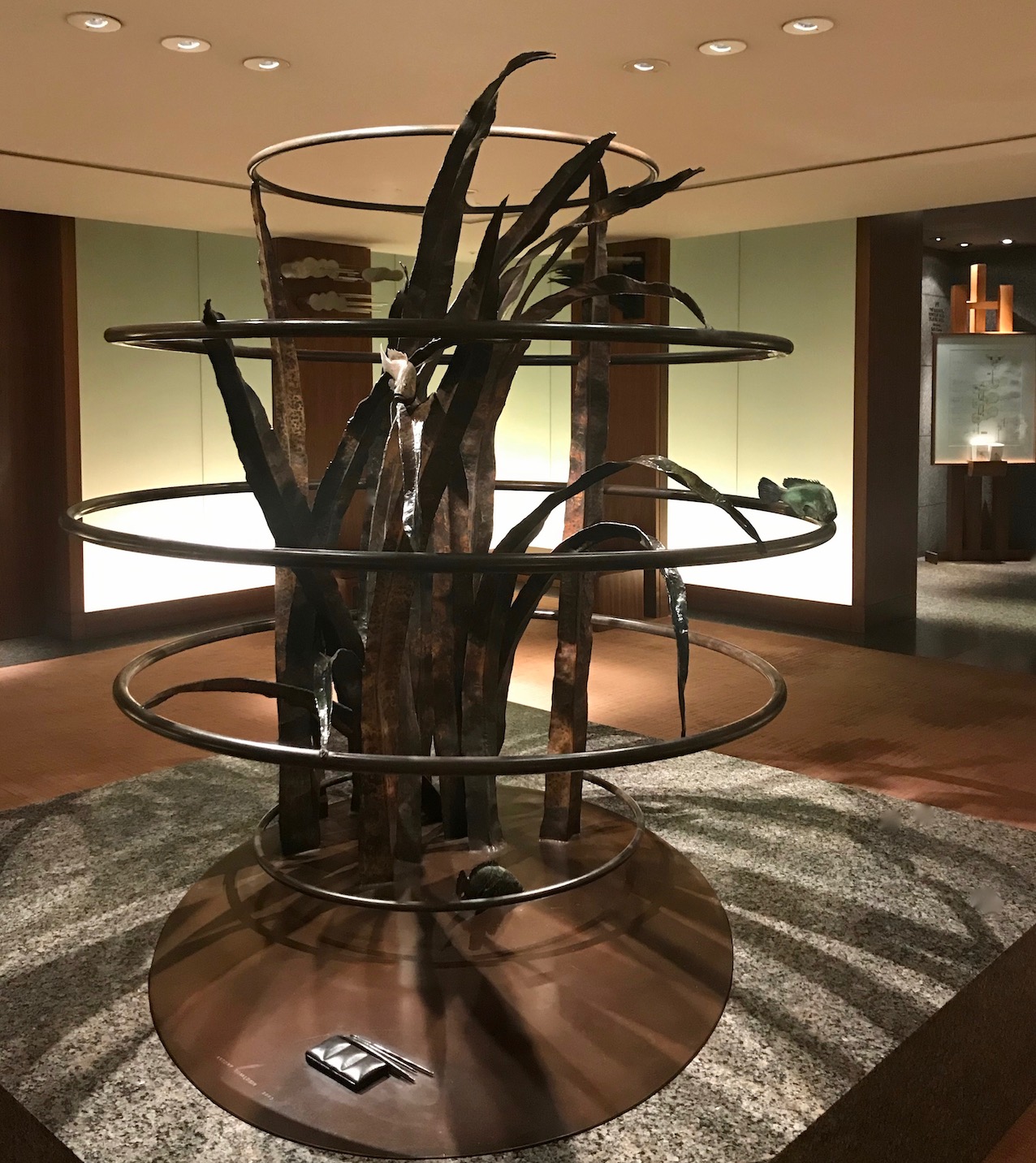 I’ve been a film fanatic all my life, an obsessive passion that eventually saw me land a job writing about movies, voice-overing movie magazine TV shows and interviewing Hollywood stars. I’ve had some incredible experiences over the years, and as Wonderboy and I headed through Shinjuku Park Tower’s sliding glass entrance doors that day, I had a strong feeling the next twenty four hours could be right up there with the best of them.

All these things and more were running through my mind as we made our way into the tasteful foyer, with its bronze-steel Airflow sculpture by British artist Anthony Donaldson. But there was no time to stop and admire it, all I could focus on was reaching those elevator doors for the ride that would take us to our destination…. Park Hyatt Tokyo… quite possibly Japan’s most luxurious five star hotel, most definitely the filming location of my favorite movie, Sofia Coppola’s Oscar-winning drama Lost in Translation. 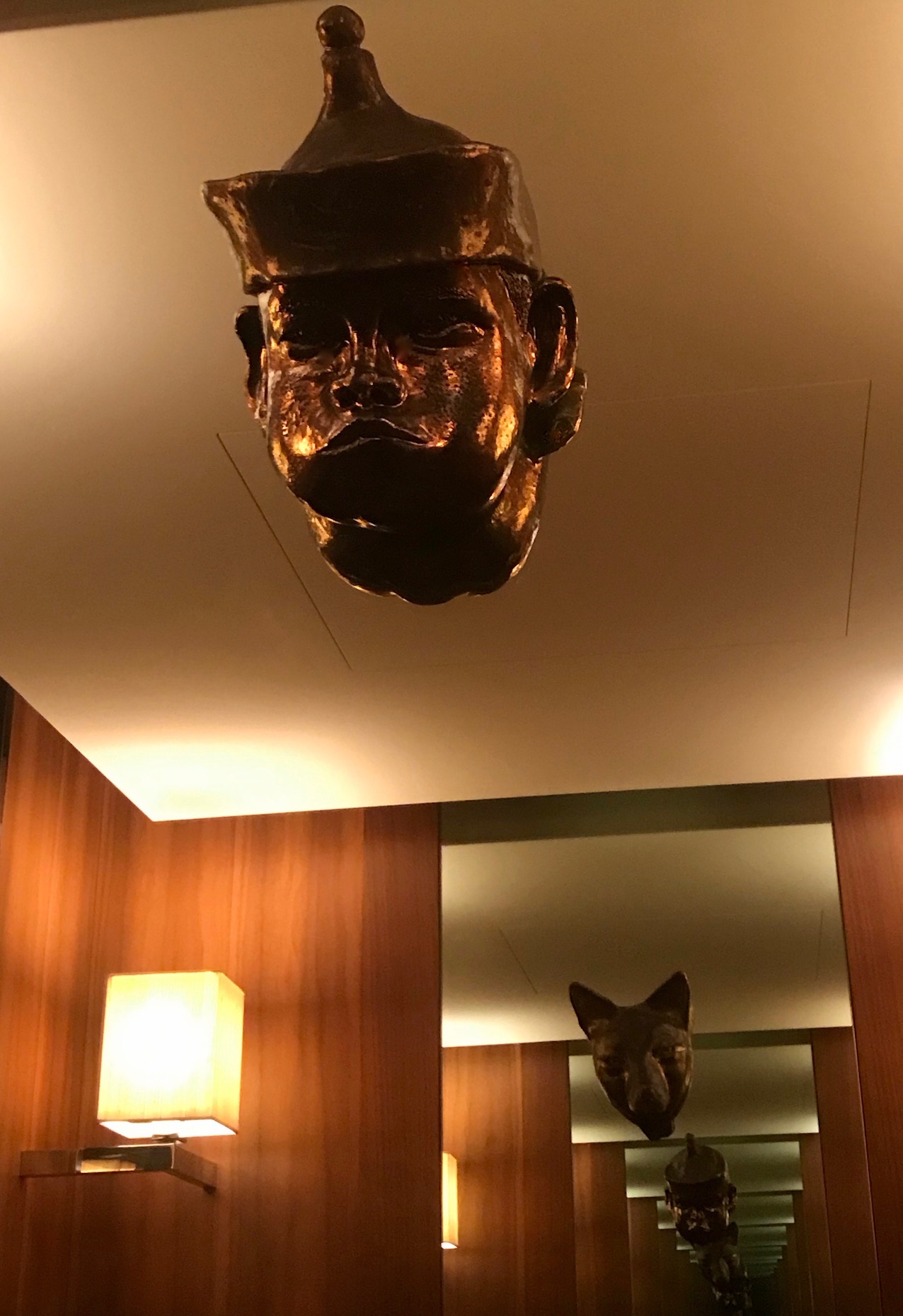 Park Hyatt Tokyo occupies the top fourteen floors of Shinjuku Park Tower and any Lost In Translation pilgrimage worth its salt takes in the main elevators with its ghoulish animal and carnival mask sculptures by local artist Mieko Yuki. As we rapidly shot up the floors I could literally feel the hairs on the back of my neck standing up. 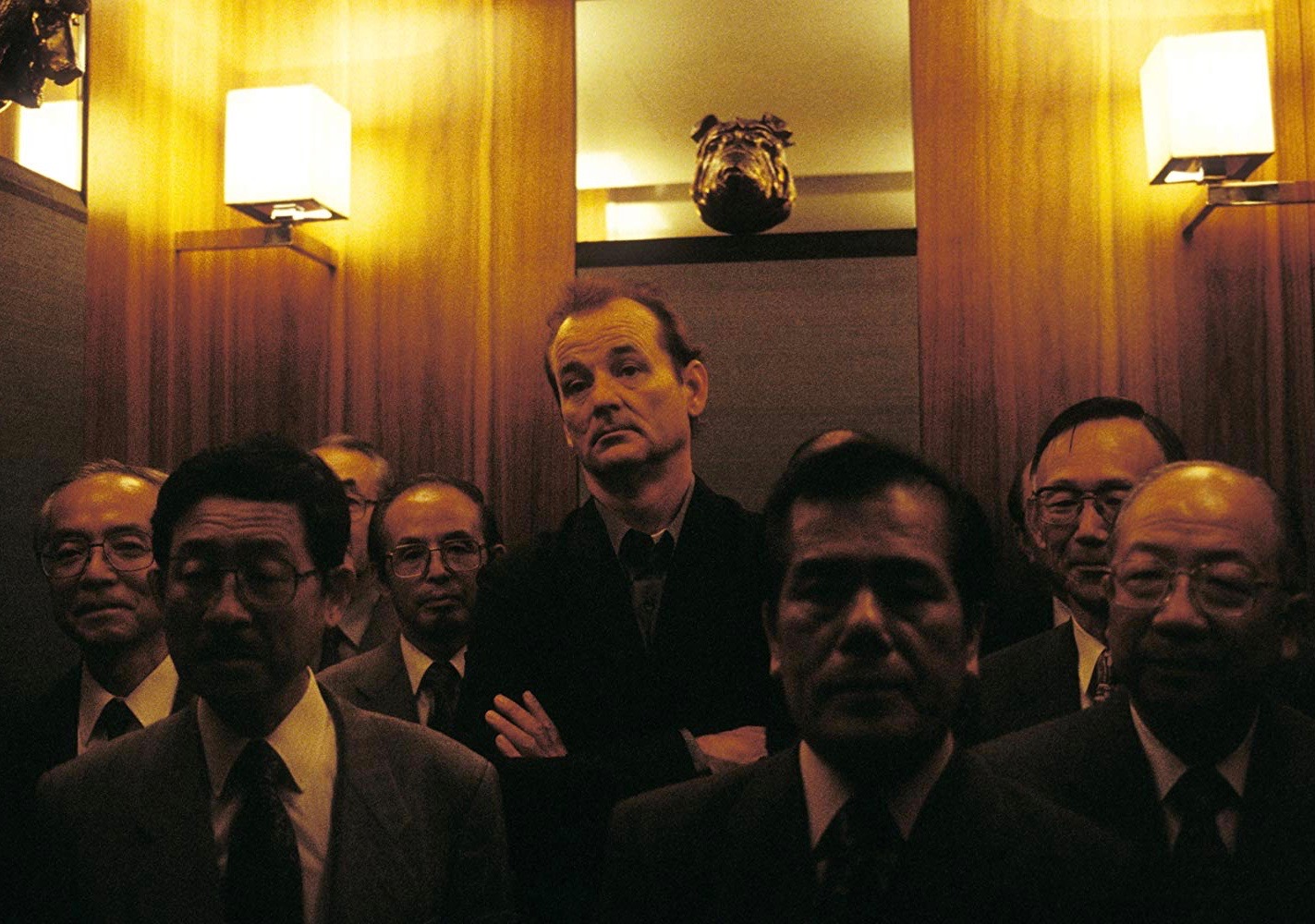 After all, this is where we see the amusing shot of midlife-crisis-ridden Bob Harris (Bill Murray) towering head and shoulders above a crowd of suited Japanese businessmen. And of course it’s where he first lays eyes on the equally lost college graduate Charlotte (Scarlett Johansson). 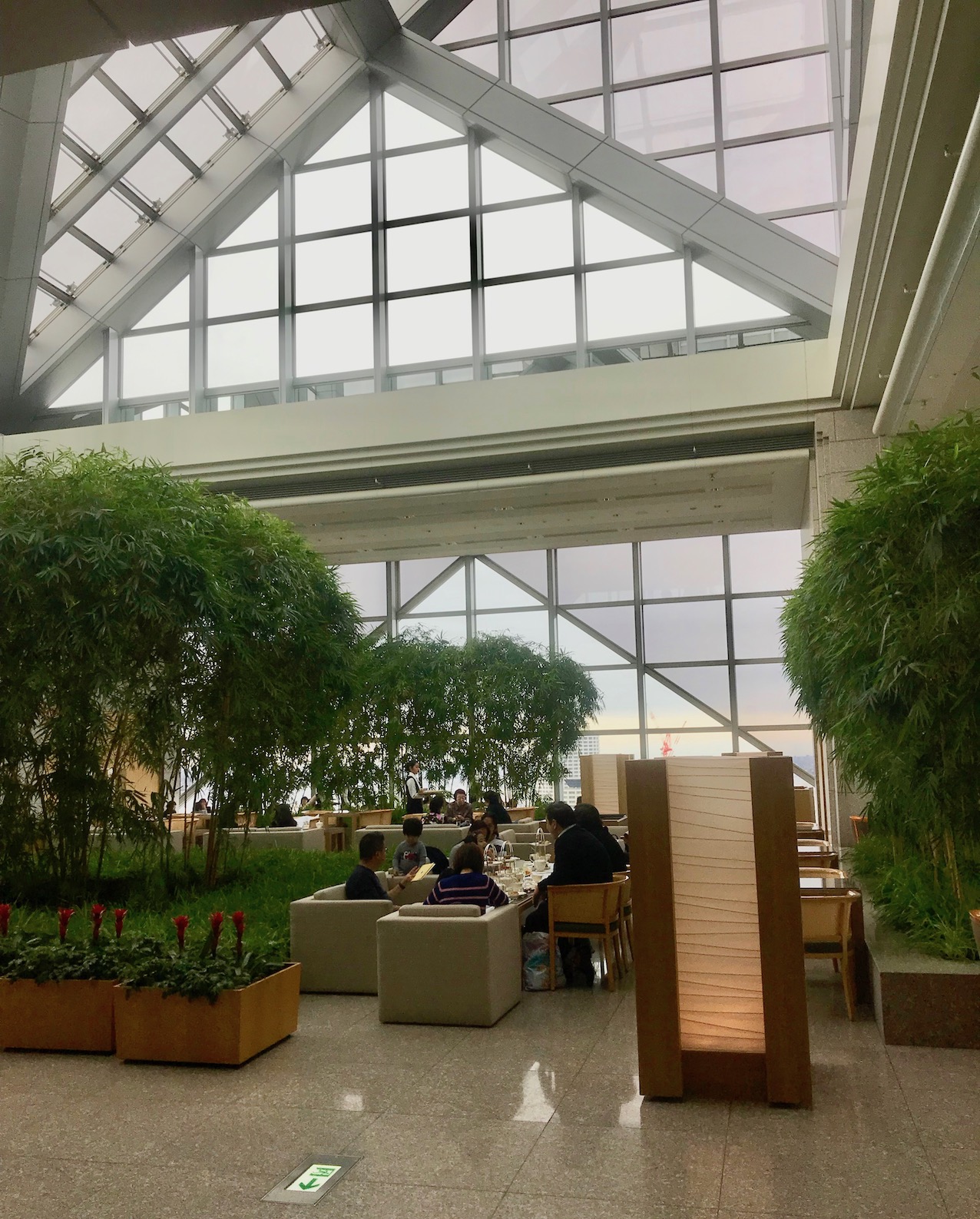 The doors slid open and boom, our dimly-lit ascent gave way to an explosion of light as we emerged into the 41st floor lobby. Known as The Peak Lounge, I found myself instantly drawn to the origami shaped glass windows and their luscious city views. 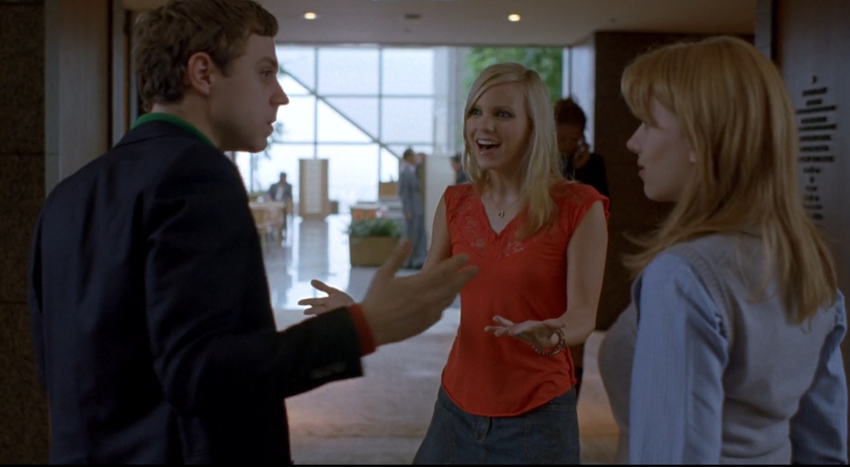 And then I was rapidly piecing it all together… the bamboo garden setting…. the grey granite walls…. those large washi paper lanterns. Yes, this was the backdrop to John (Giovanni Ribisi) and Charlotte’s awkward first meeting with bimbo actress Kelly (Anna Faris). 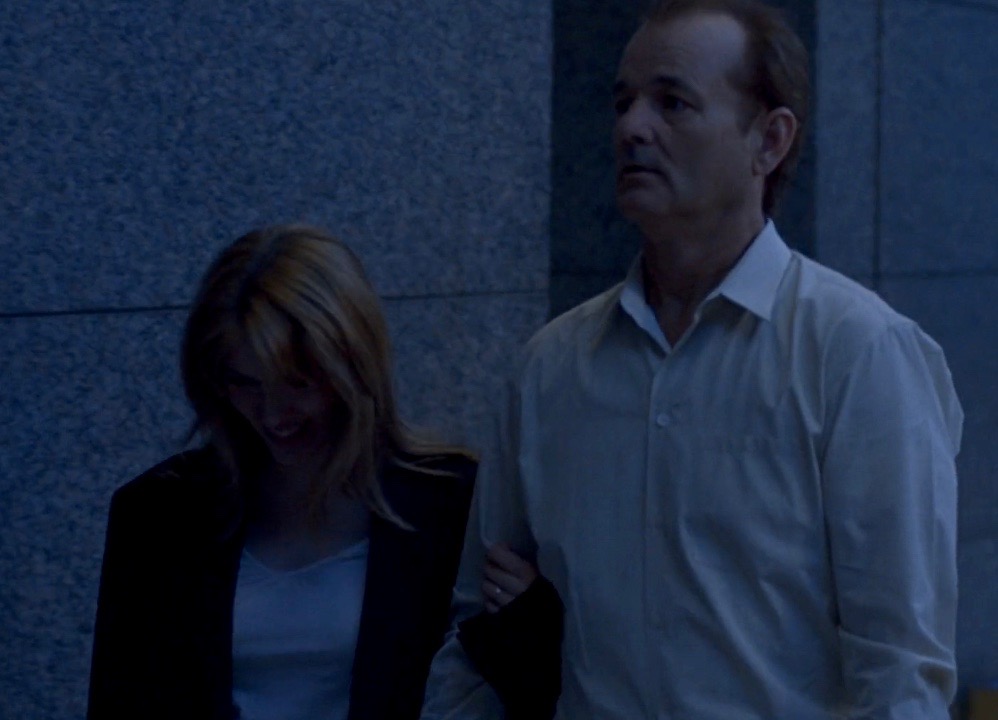 Bob and Charlotte sneaking through The Peak Lounge – Lost In Translation.

It’s also here in The Peak Lounge where a hand-in-hand Bob and Charlotte expertly sneak past Kelly late one night as she obliviously murders Carly Simon’s Nobody Does It Better. 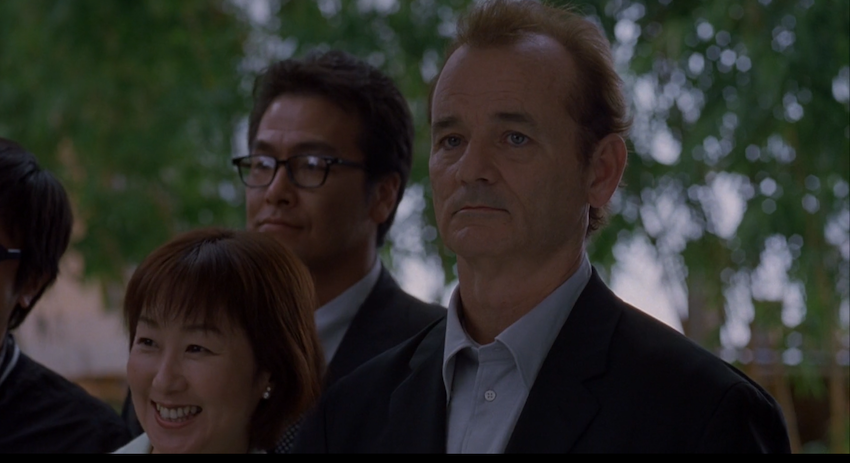 And of course it was here that poor old Bob stands ashen-faced for photos with the Suntory crew, barely able to disguise his heartache as Charlotte disappears behind the mirrored elevator doors. 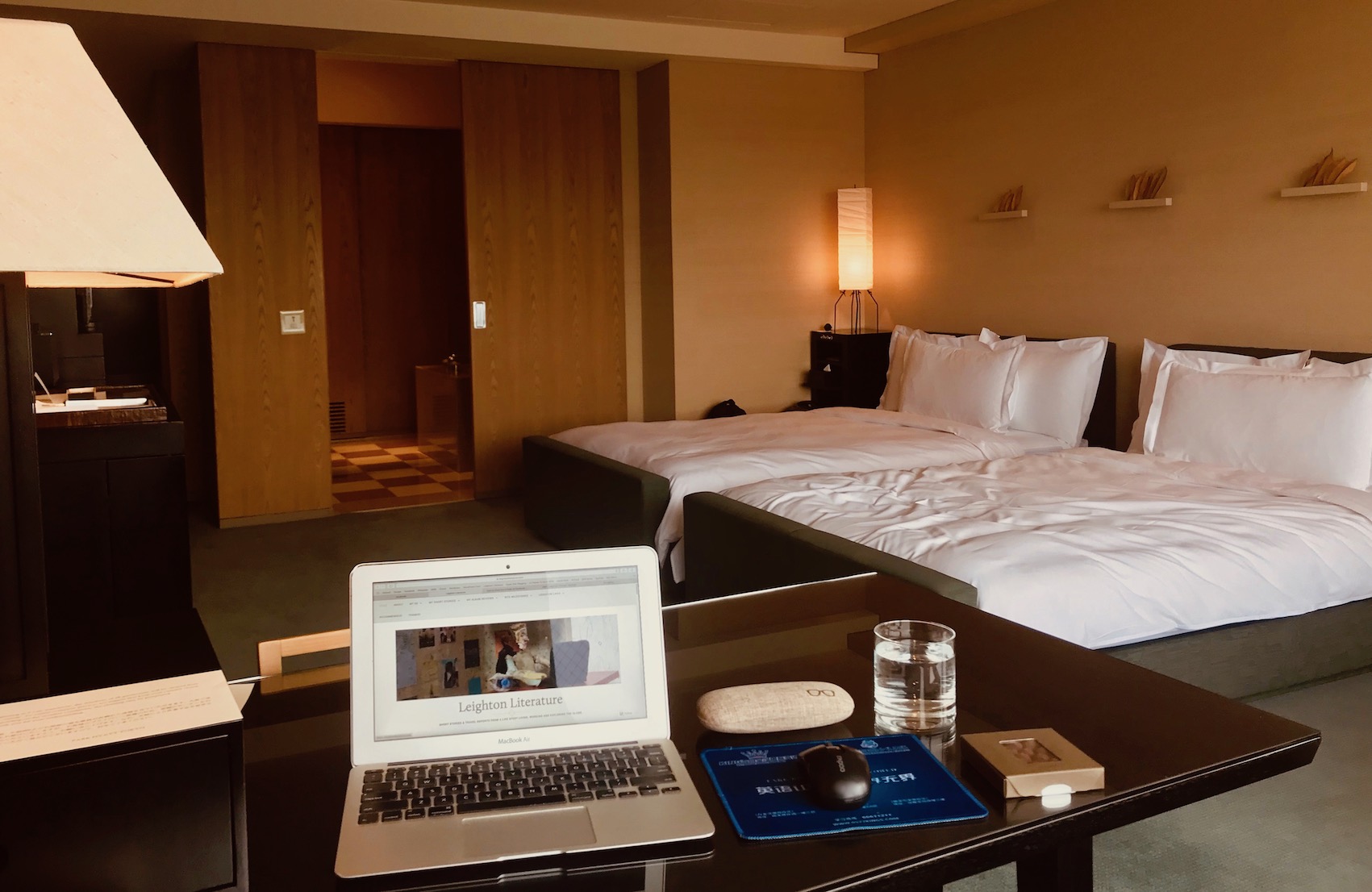 My suite at The Park Hyatt Tokyo.

“Welcome to Park Hyatt Tokyo Mr. Thomas!” grinned Emi. Cute, immaculately suited and infectiously peppy, she’d picked us up at The Peak Lounge and personally hand delivered to our Deluxe Twin Room on the 44th floor. And that was the check-in process apparently, a seamless experience that spared us any kind of queuing at reception. “It’s huge!” cooed Wonderboy, a notion that certainly wasn’t mistaken. At 55 square meters Park Hyatt Tokyo offers the largest standard rooms in the Japanese capital, while the extra wide beds are apparently equipped with Egyptian cotton sheets and down feather duvets. 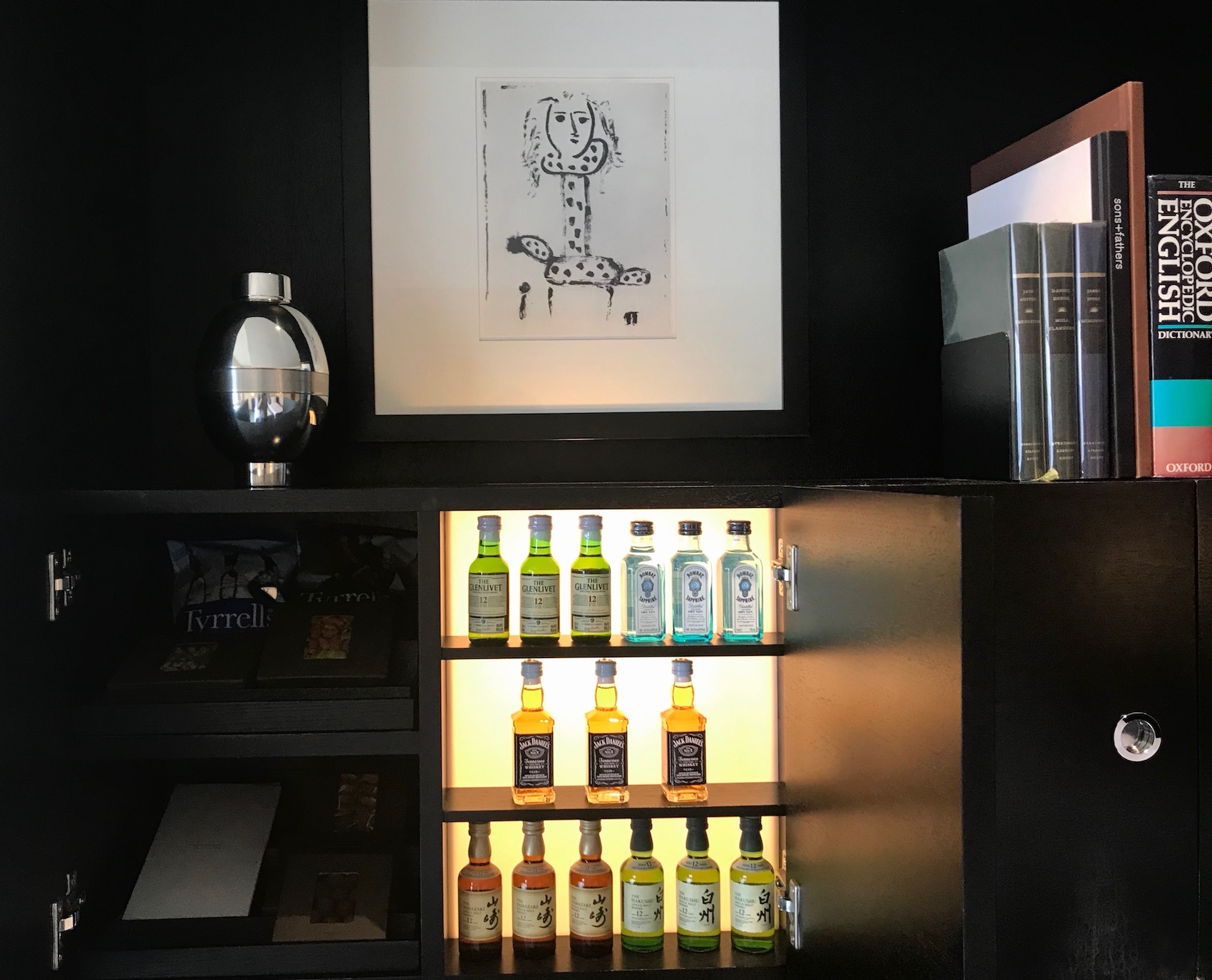 The minibar, approach at your financial peril – The Park Hyatt, Tokyo. 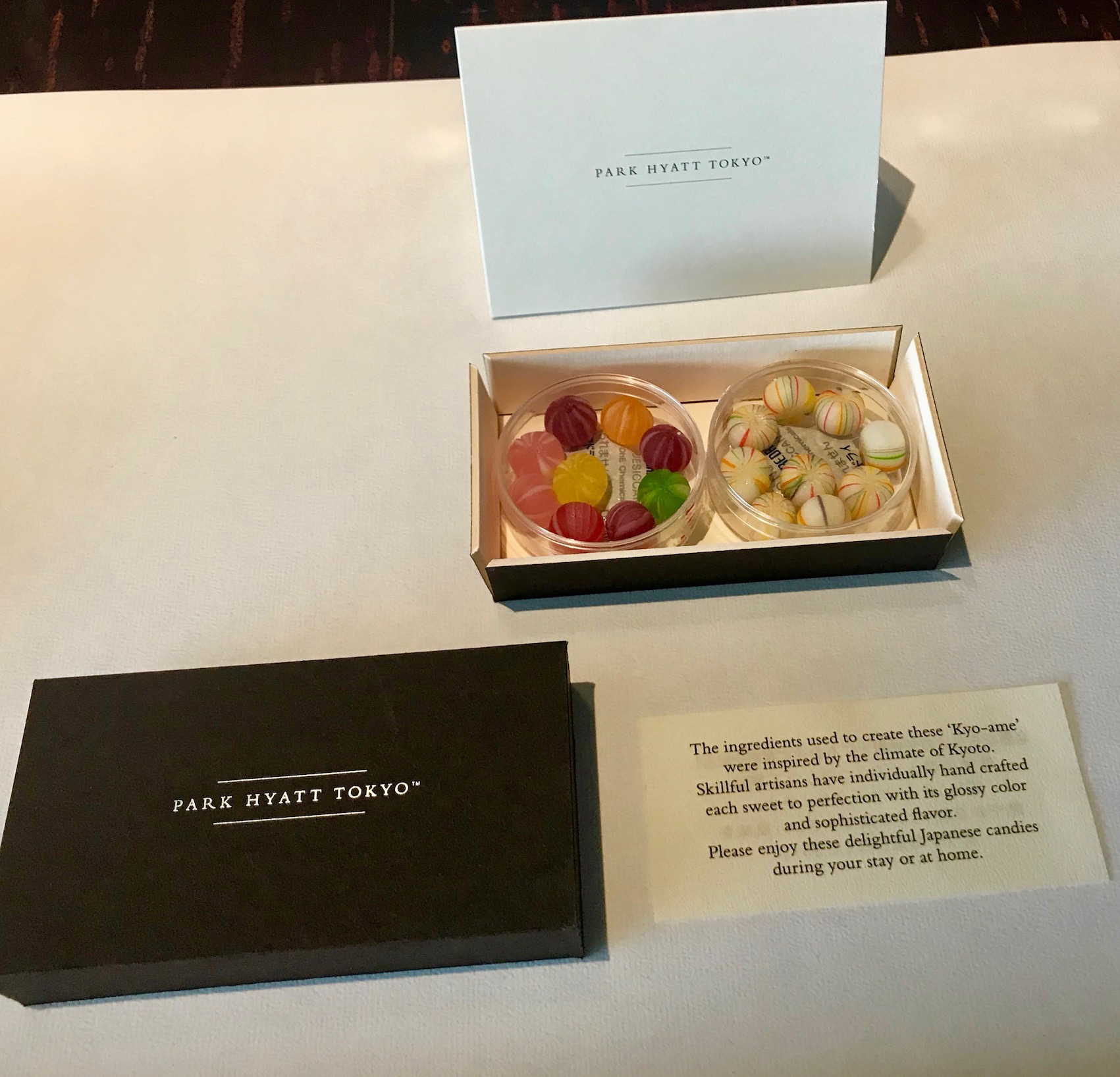 Darting around our new Park Hyatt home, we were quick to turn on the 40 inch TV, marvel at the tempting options in the minibar and sample some of the complimentary handcrafted Kyo-ame boiled sweets. They proved to be as richly fruity in taste as they were glossy in colour. They didn’t last long. 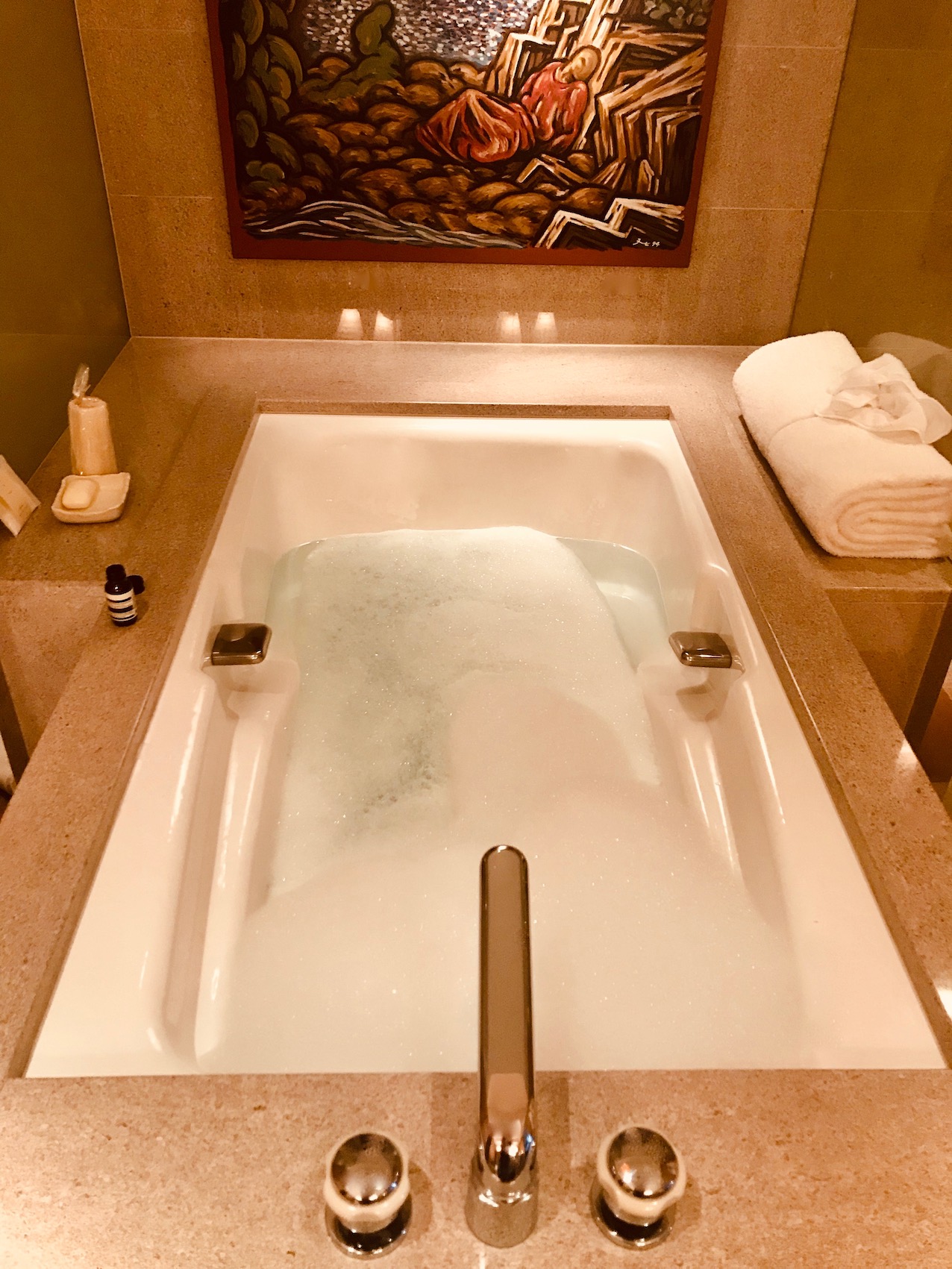 In the stunning bathroom meanwhile we could pretty much see our reflections in the stainless steel faucets and couldn’t help but admire the striking painting by Yoshitaka Echizenya above the deep soaking tub. Later on, before bed, I would lower myself into that glorious tub with an ice-cold bottle of beer. And it was virtually impossible not to have a giggle at the heated toilet seat that sprang dutifully to attention whenever we opened the door. 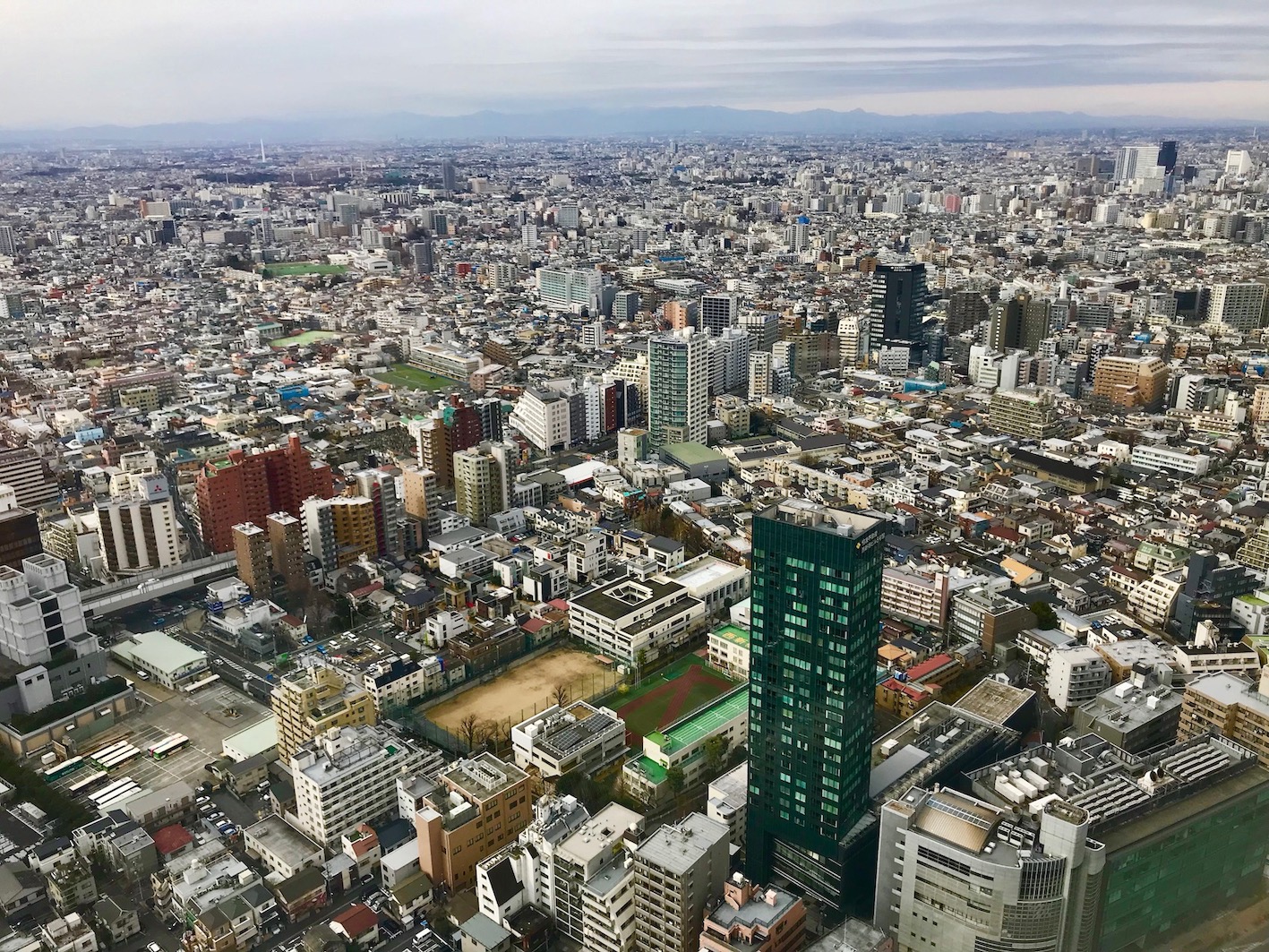 The view from my suite, The Park Hyatt Tokyo.

Last but not least we concluded our room tour by simply standing at the giant windows gazing out across the Tokyo skyline, magnificent in all its glory even on a grey day like this. Ok, so we didn’t actually get that clear Mount Fuji view we’d been hoping for but hey, I guess even Park Hyatt Tokyo can’t micromanage the weather. 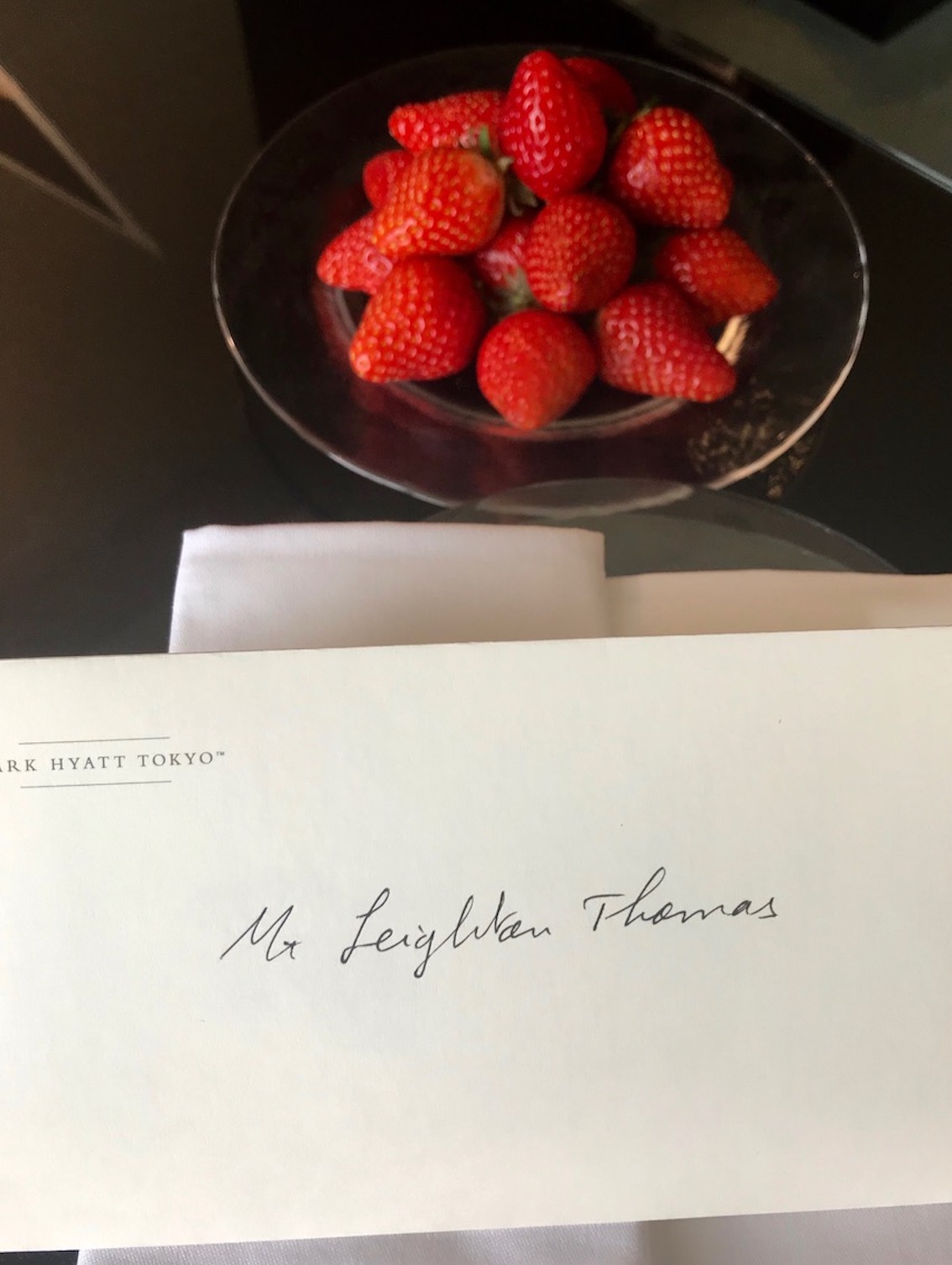 It was there by the windows at the armchairs and desk that Wonderboy and I finally took a load off for some chill time. But then, much to our surprise, the doorbell rang. Who could it be? Delightfully, it was a butler-like Park Hyatt gentlemen carrying a silver bowl of strawberries with a creme envelope adorned with the words: Mr. Leighton Thomas. Opening the envelope, I unfolded a handwritten letter which read:

a warm welcome to Park Hyatt Tokyo! We wish you an enjoyable and comfortable stay.

A short while later, full of strawberries and Park Hyatt opulence, it was finally time to set to work! Above everything else the reason I really loved that room was that it made me think of the film and its amusing bedroom scenes, not to mention the movie poster where Bill Murray sits on the side of the bed looking deflated in his white slippers. 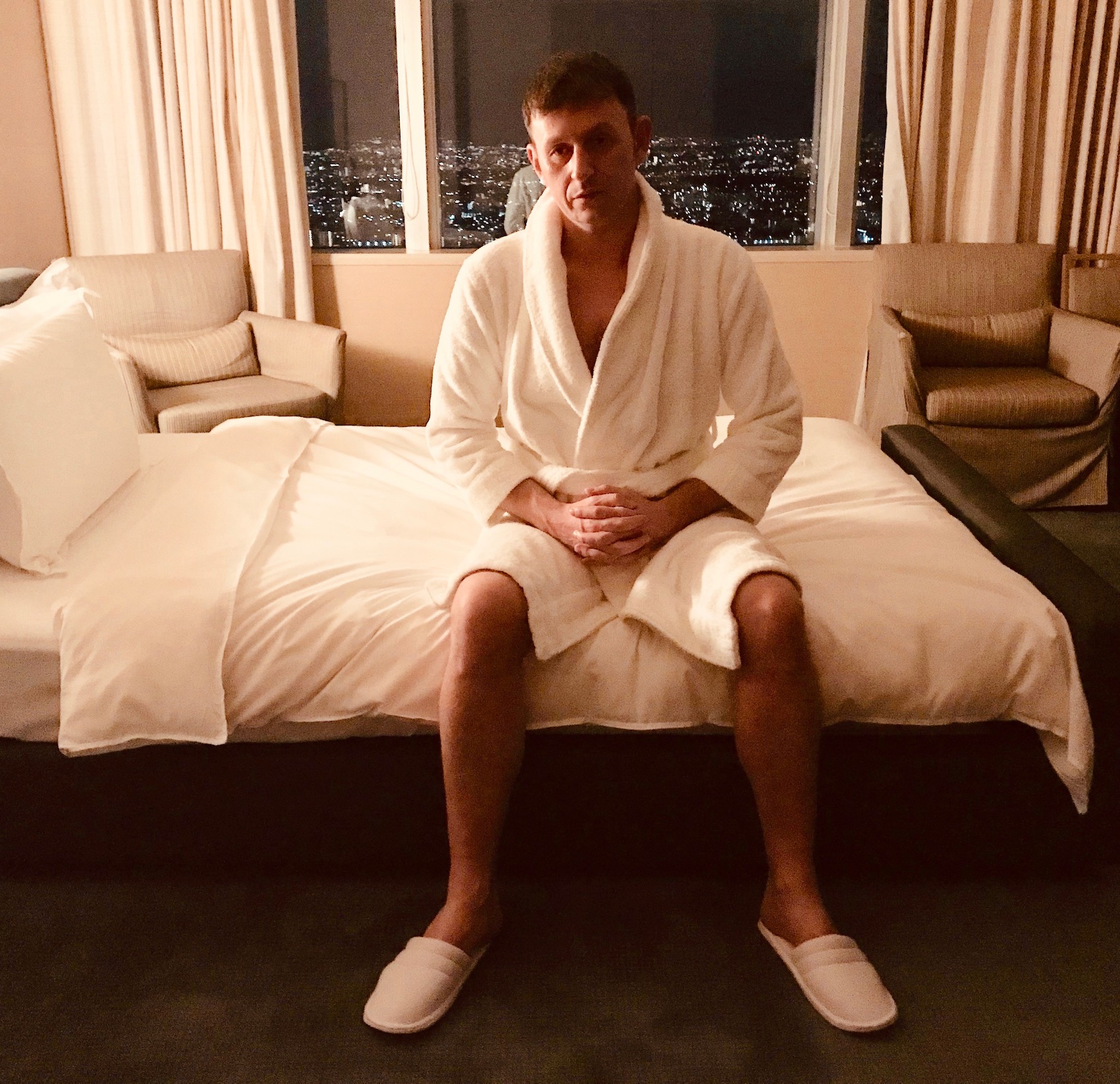 It wasn’t easy trying to recreate that poster! The bedroom needed rearranging, lighting was an issue and I had to stick on a fluffy-white-polar-bear-dressing-gown in place of Bill’s thin, brown kimono. Under direction from Wonderboy behind the lens, I clasped my hands together… tilted my head this way… tilted it that way… tried looking more miserable… had a go at looking slightly less miserable. We must have taken over 50 shots before conceding that whatever we had now it probably wasn’t going to get any better. 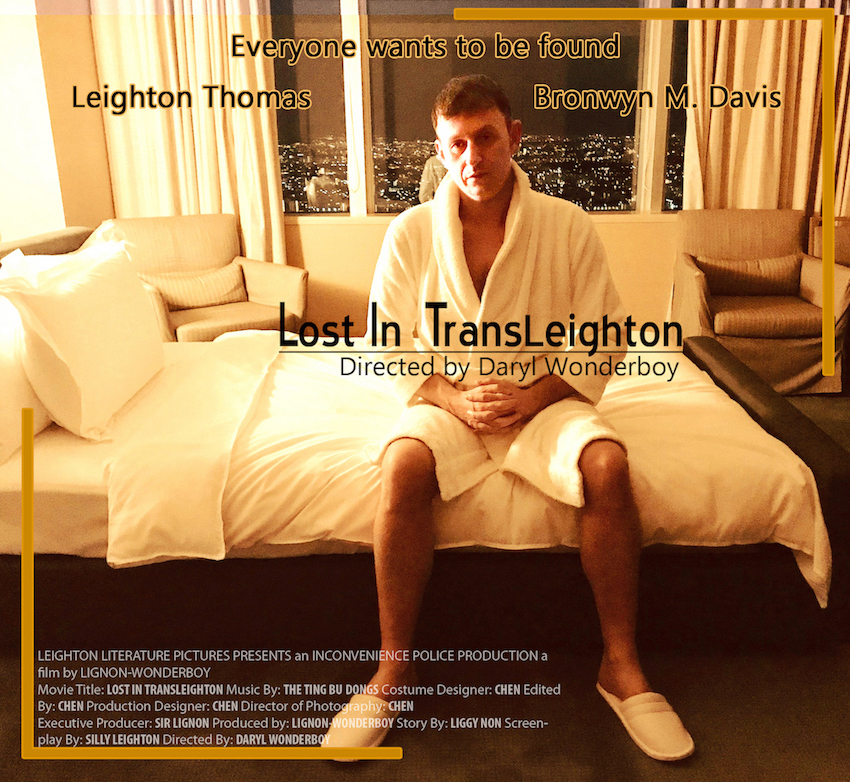 It was only some months later back in China after a lengthy editing process that I finally got things looking the way I wanted. Not a perfect recreation of course, but a veritable beast in its own right and a fitting tribute to both the movie and our stay at Park Hyatt Tokyo.

It was 15:00 that afternoon by the time we were finished and, as amazing as everything had already been, in truth we hadn’t even got started! To find out more about my incredible stay at Park Hyatt Toyko and our immersion into all things Lost in Translation, check out my article: The Park Hyatt Tokyo Part II.