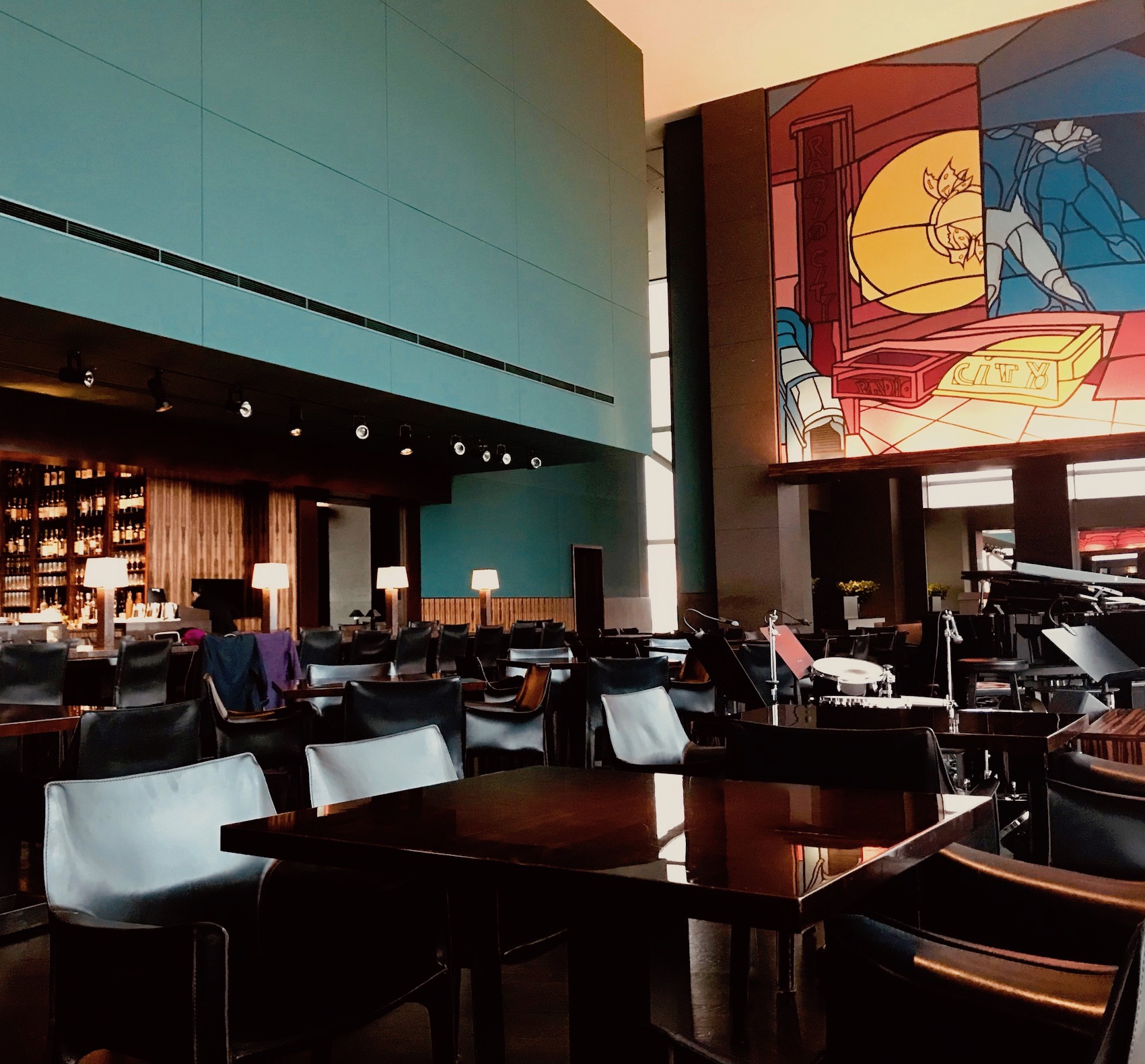 Want to get the full picture? Before reading this why not start with my article:

February 2019. “Welcome to Park Hyatt Tokyo!” smiled Kathy warmly, “I do hope you’ve been enjoying your stay so far”. I assured her that we most certainly were, our already unforgettable time featuring a handwritten welcome, opulent lodgings, unrivaled city views, a tricky but fun bedroom photo shoot, fresh strawberries, and of course Lost In Translation filming spots galore! And now, as special Park Hyatt guests, we were in for a real treat with some behind-closed-doors time at the hotel’s famous 52nd floor watering hole The New York Bar. 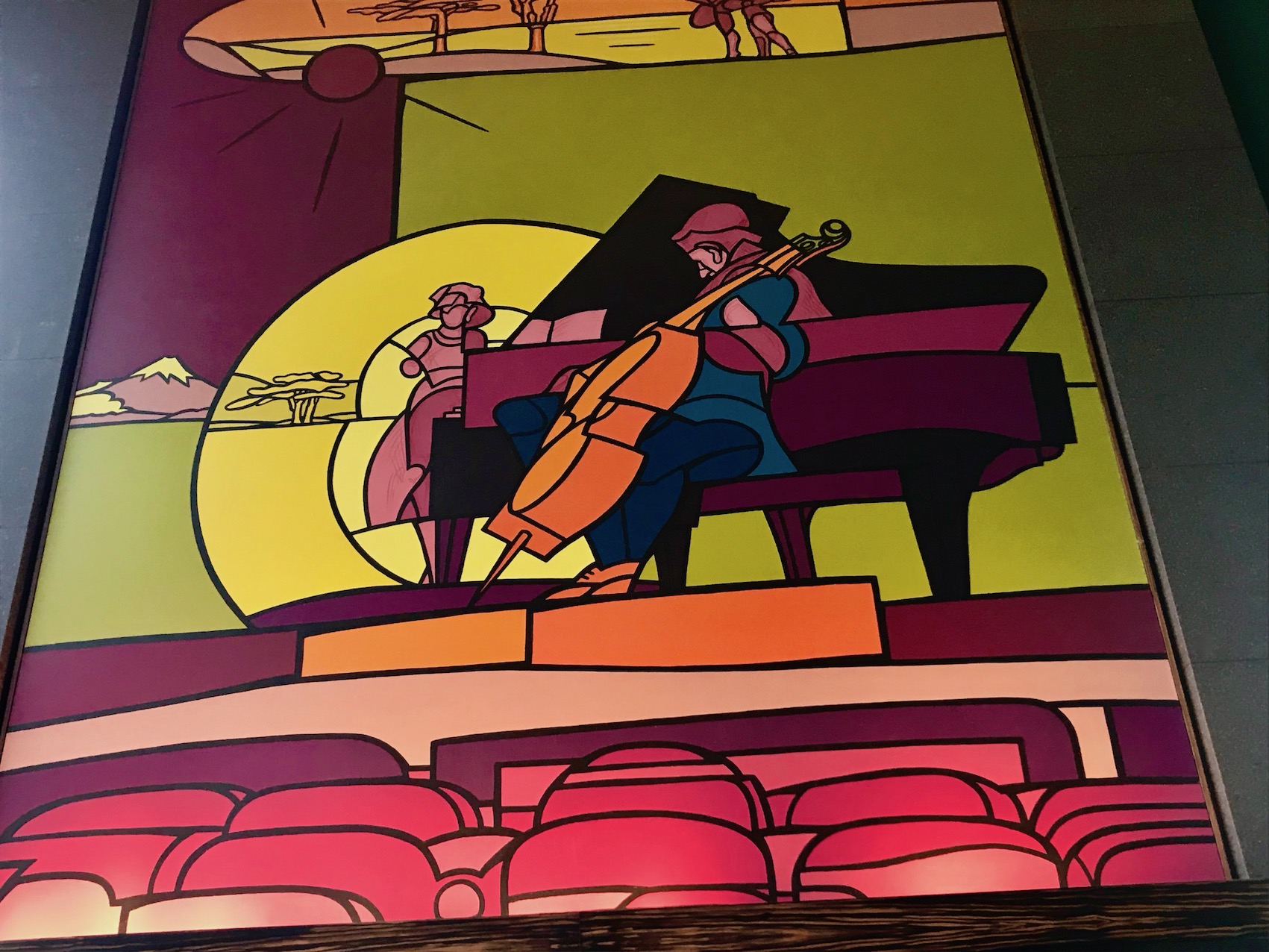 “Thank you! We’re glad to be here, we’re Sausalito!”

Decked out in stylish black and chrome with floor to ceiling glass windows, my heart was beating fast as I took in the scenes so embedded in my mind from the movie. Sixteen years later and it hadn’t changed a bit! There were the remarkable paintings by Italian artist Valerio Adami and there was the stage with its grand black piano and microphone stands. In my head I could actually hear the house band purring through Scarborough Fair.

“You’re probably just having a mid-life crisis. Did you buy a Porsche yet?”

“You know, I was thinking about buying a Porsche”. 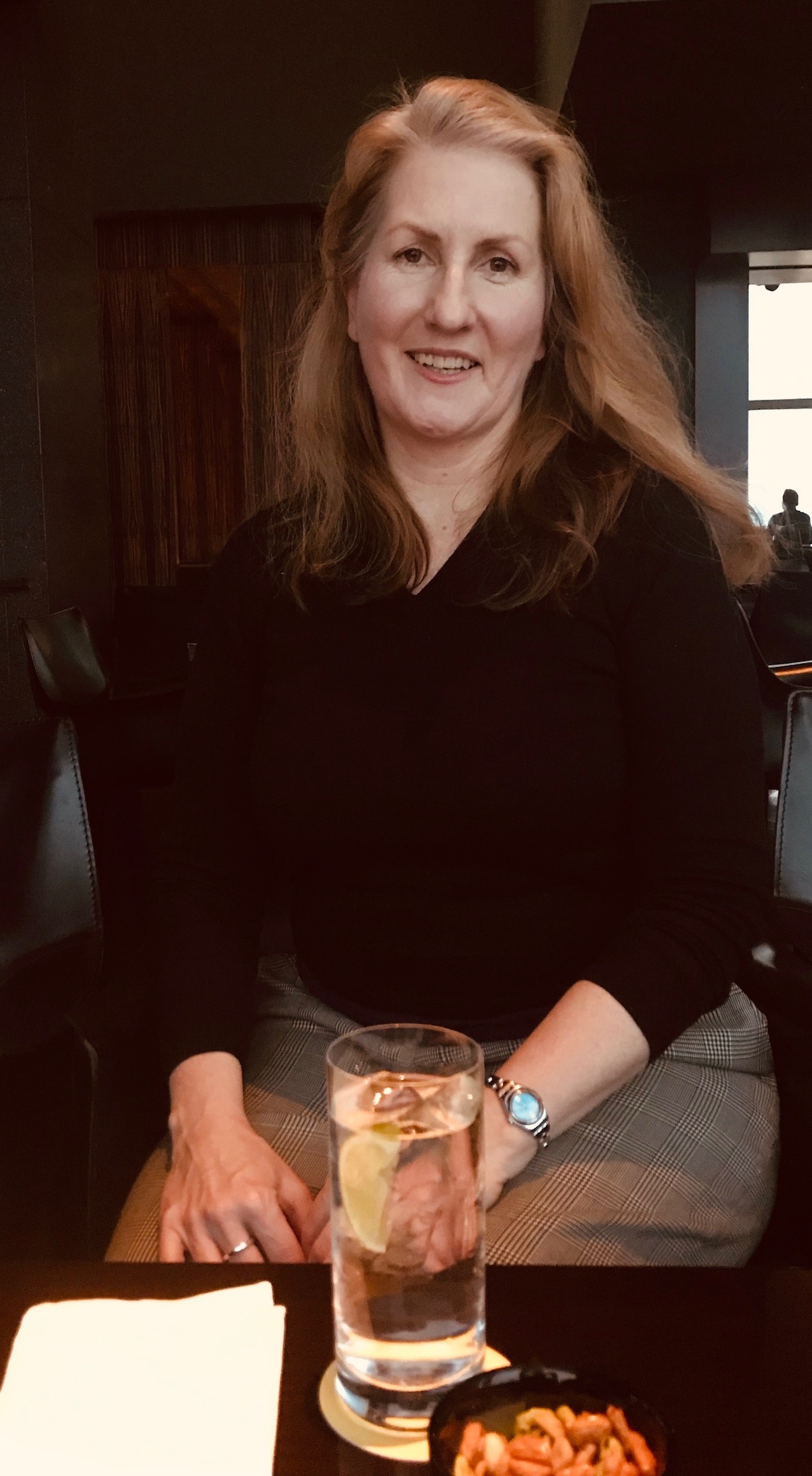 Wonderboy and I had been joined by Bronwyn that afternoon, a gregarious Aussie expat who’d responded to my somewhat vague advert: Woman Wanted for Lost In Translation shenanigans! I’d briefly considered putting Wonderboy in a blonde wig, but then thought better of it. Thankfully my decision was vindicated as Bronwyn proved to be a fine accomplice, smiling and laughing throughout in contrast to my palpable edginess.

With Wonderboy behind the camera and Kathy and her colleagues busying around in the background arranging drinks and a few key props, it was great teamwork from all present and quite frankly a project that would’ve been impossible to pull off during opening hours. I’ll be forever grateful to Kathy for being so accommodation that afternoon. 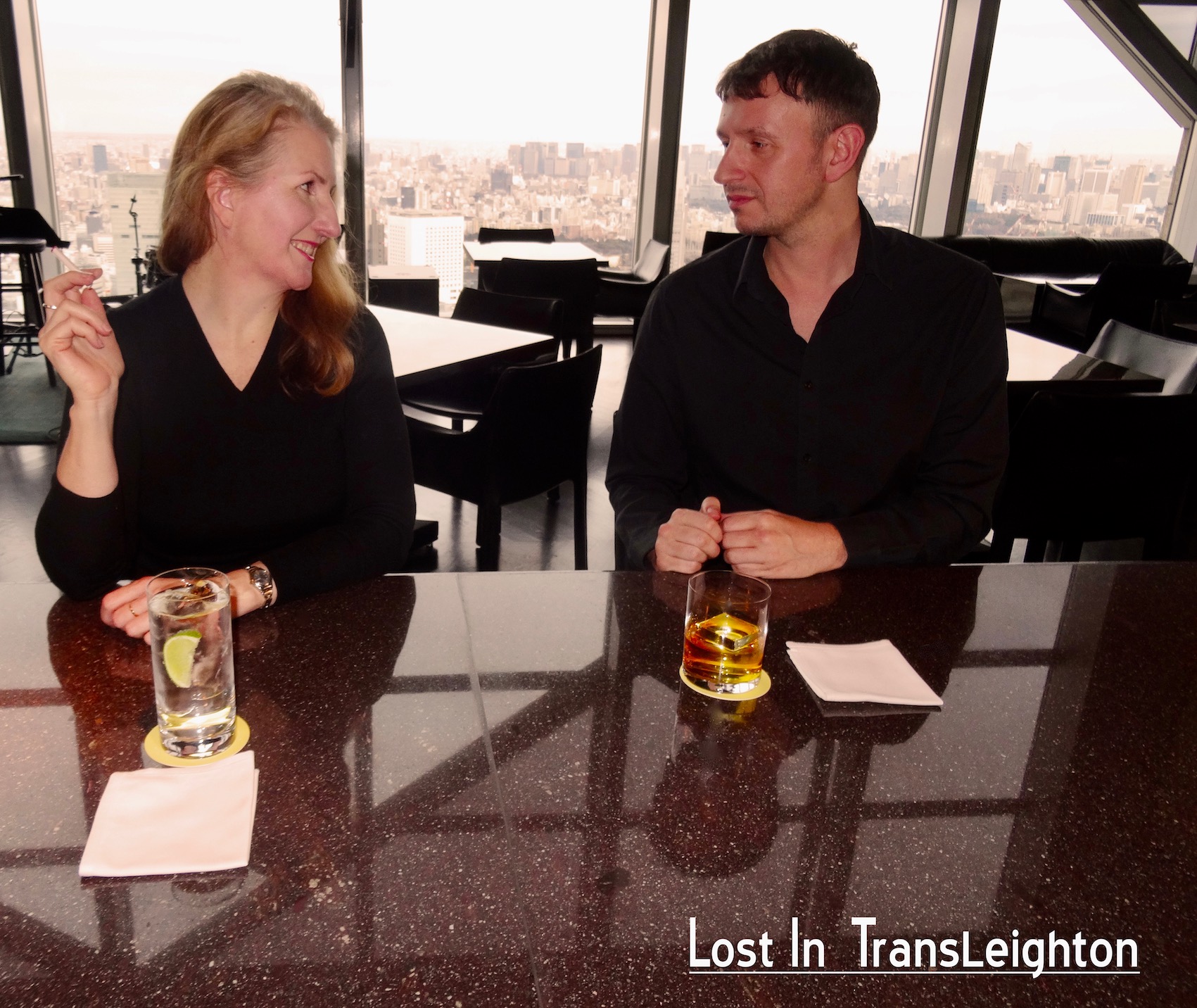 “Well, you figure you sleep one third of your life, that knocks off eight years of marriage right there”. 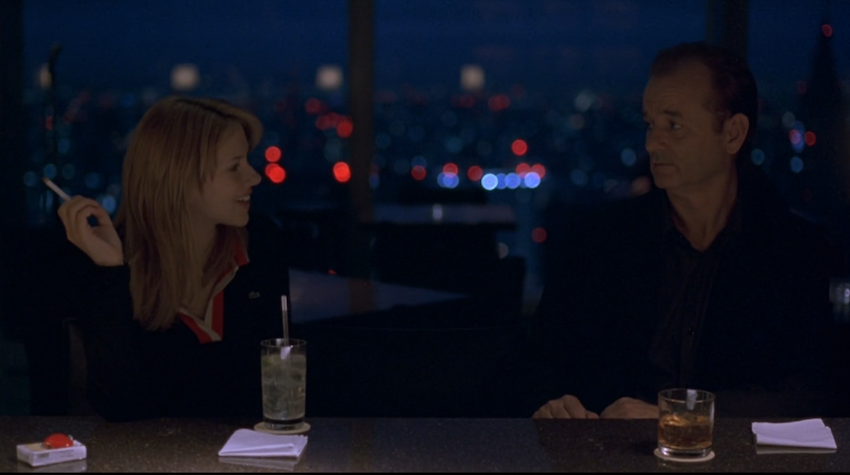 In the end it was great fun and unspeakably magical doing those shots right on the very spot where filming took place back in 2003. While our photo isn’t an identical replica of the still we’d modeled it on, I feel we nevertheless managed to capture a taste of that Lost In Translation magic. 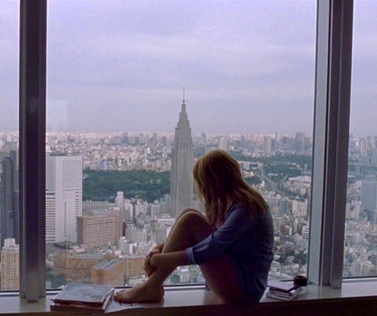 I was totally unprepared when Kathy suddenly asked us if we wanted to go and see Park Hyatt’s Diplomat Suite. “Whaaaat?” I had enquired about this possibility prior to my trip and whilst Kathy had agreed in principle, I understood that the chance of it being free on the day of our stay was slim at best. But it seemed our luck was IN, so off we went to the space that served as both Bob and Charlotte’s rooms during the making of the movie. I can’t even describe the wow factor as those doors swung open and we strolled inside. 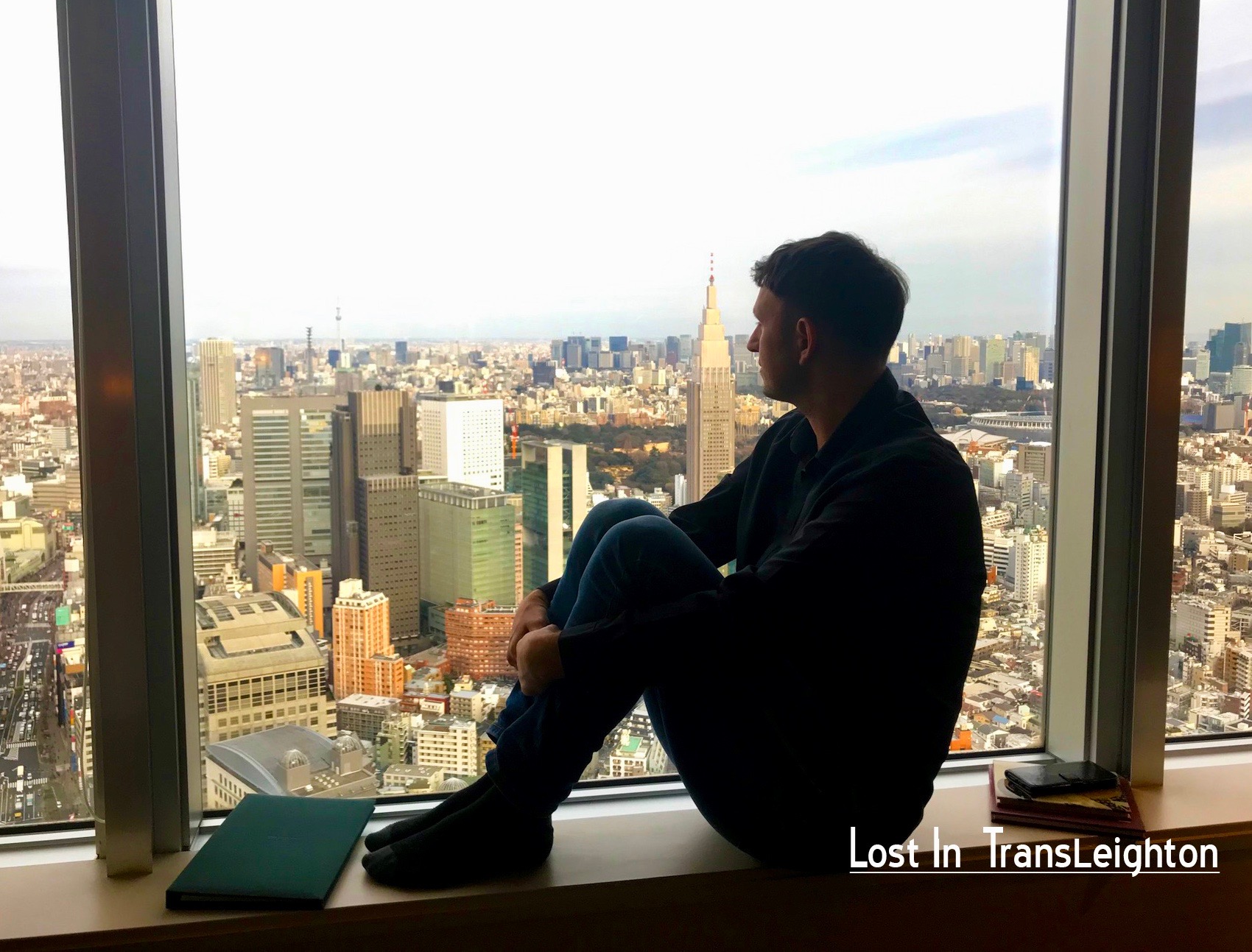 Unsurprisingly my eyes were drawn to that dramatic window ledge where for a moment I actually saw Scarlett sitting, arms wrapped around her knees, gazing pensively out at the Tokyo skyline. When Kathy suggested we actually take the time to do some reproduction shots I jumped at the chance. Magical, magical stuff! 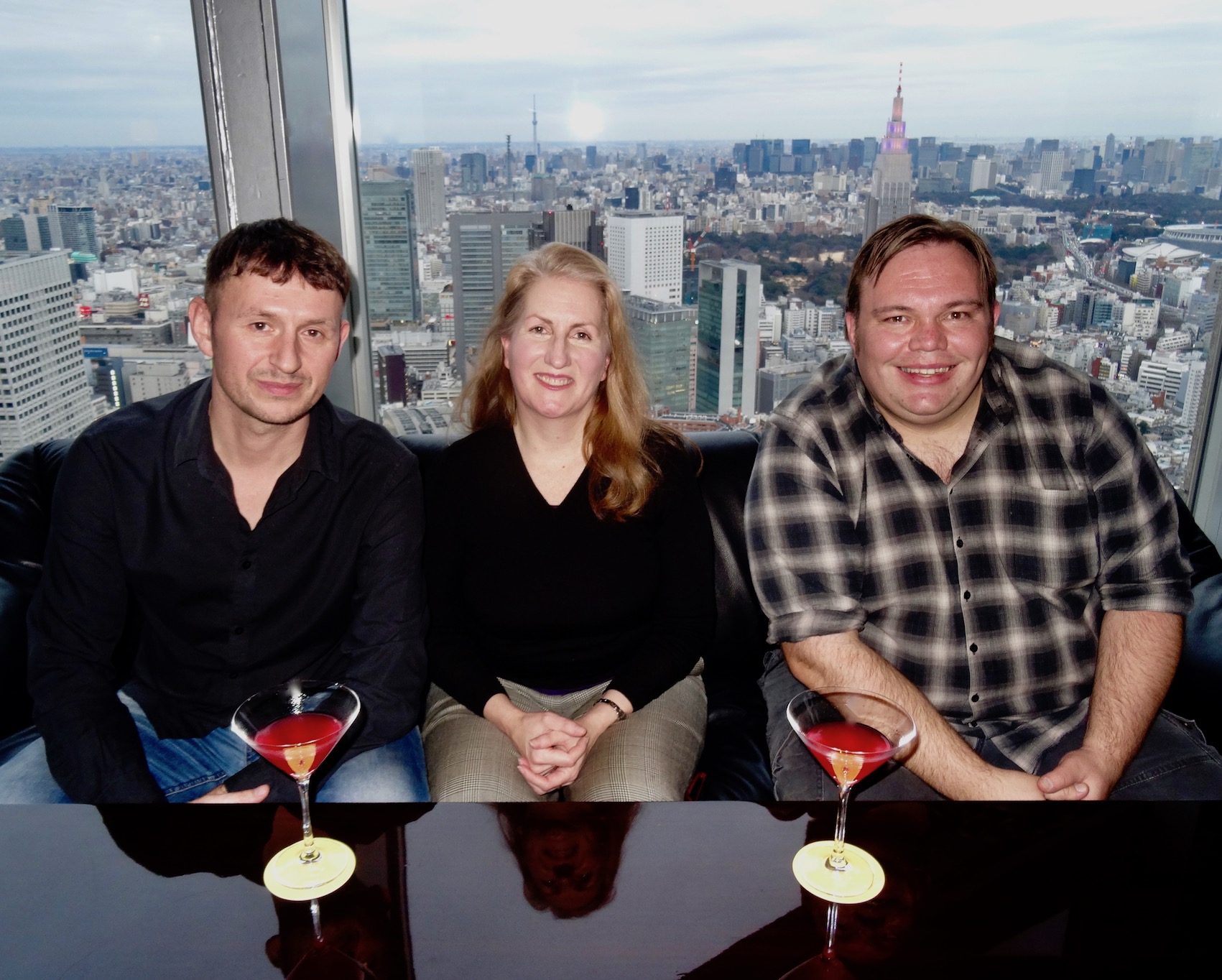 Back at The New York Bar and opening time was now rapidly approaching. Keen to ensure we had the best spot for the night, Kathy invited us to settle down on the spacious sofas at a choice corner table by the window with sweeping Tokyo views. Again this was no random decision, she’d only gone and given us the very spot where John, Charlotte, Kelly and friend sit shooting the shit before Charlotte feels herself drawn over to Bob who jokingly reveals his grand escape plan. It was another wonderful gesture from Kathy who was far from exhausting her arsenal of surprises. “I think it’s only fitting that you try our L.I.T’s” she said and so, a short while later, she returned with a pair of Park Hyatt’s Lost In Translation cocktails! Impossibly red and deliciously sweet, they were a pleasing mix of sake, cherry blossom liqor, cranberry juice and lime! “Kanpai!” 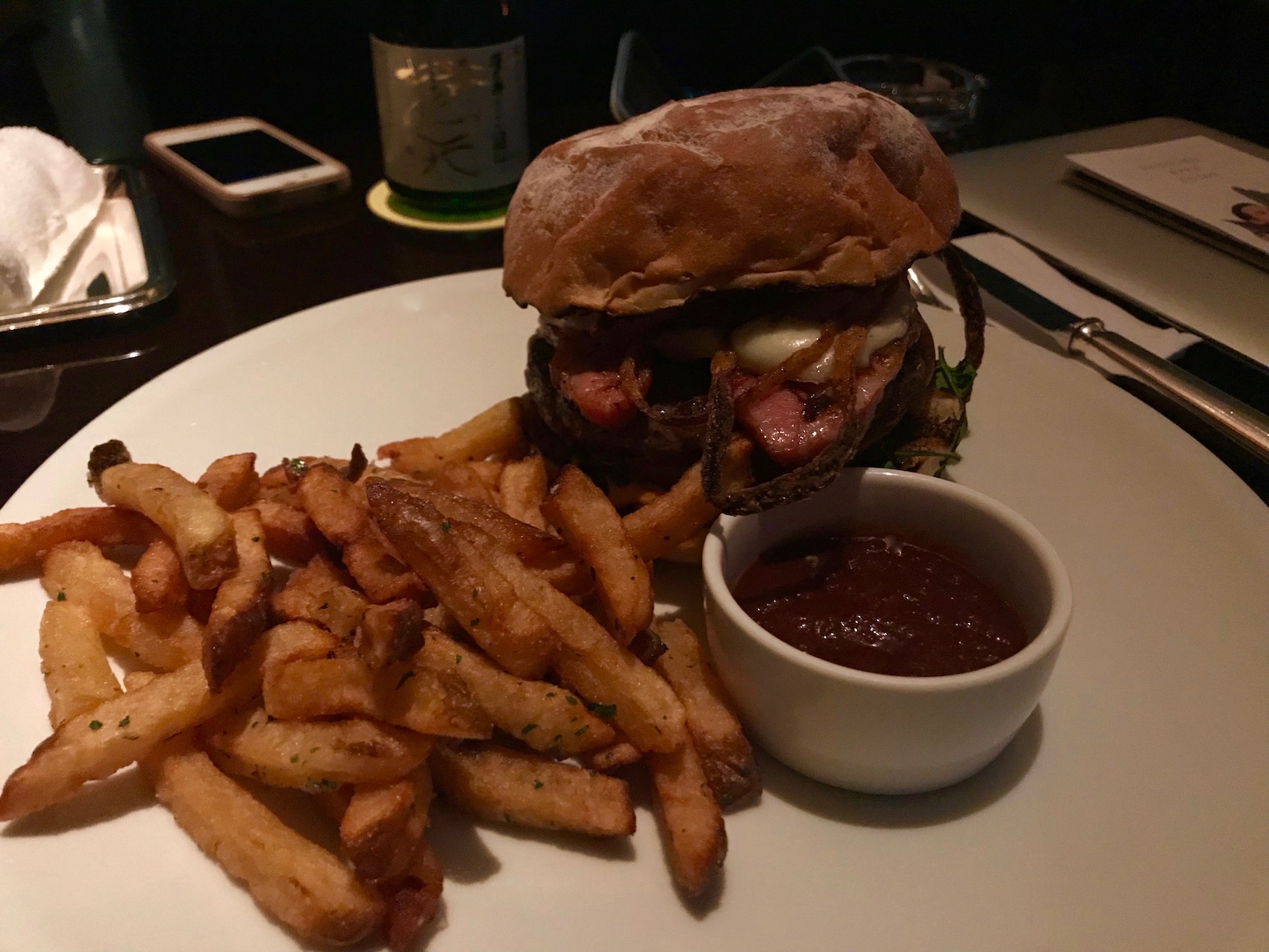 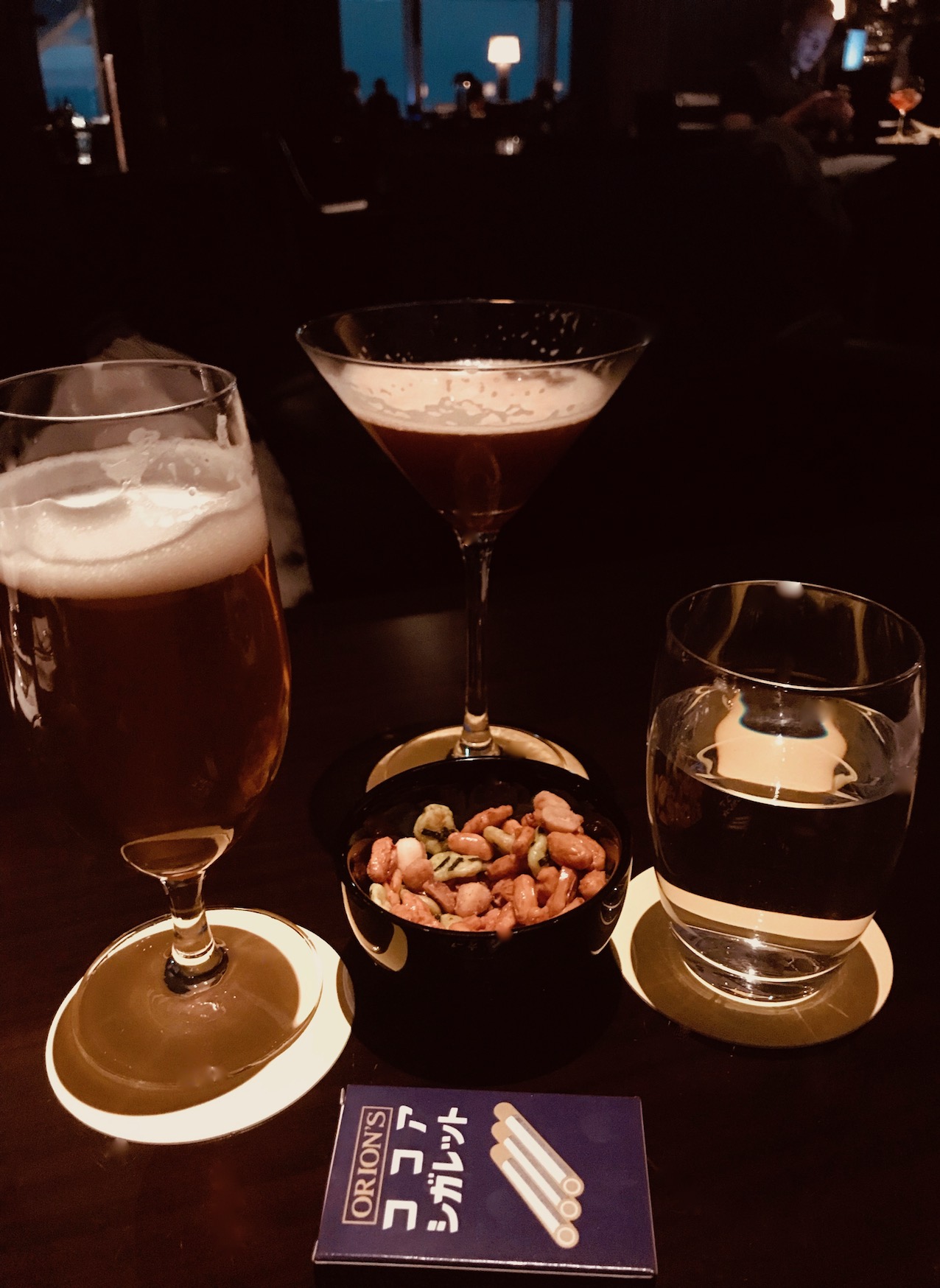 By now The New York Bar was open for business and customers were already streaming in. We were all thanking Kathy profusely for a wonderful afternoon when she revealed that as special guests we’d also be receiving complimentary food and drinks! “Just let them know what you want and have a great evening!” I’ll never forget that perfect Tokyo night. Both Wonderboy and I went for the delicious Taleggio cheese and bacon Wagyu burger with crispy potato fries. There were beers and cocktails too, including a Perfect New York featuring Woodford Reserved Double Matured Pomegranate juice and a New York Punch with Bacardi 8 and mango, pineapple, orange and Abbott’s bitters.

The New York Bar’s live music kicked in at 20:00. With everything that had happened so far I was half-expecting Sausalito themselves to show up. They didn’t, but the resident jazz band still put on a great show and really had the place buzzing. As Park Hyatt guests this was free, non paying customers have to pay a 2500JPY entrance fee (£17/€20/$22.50). 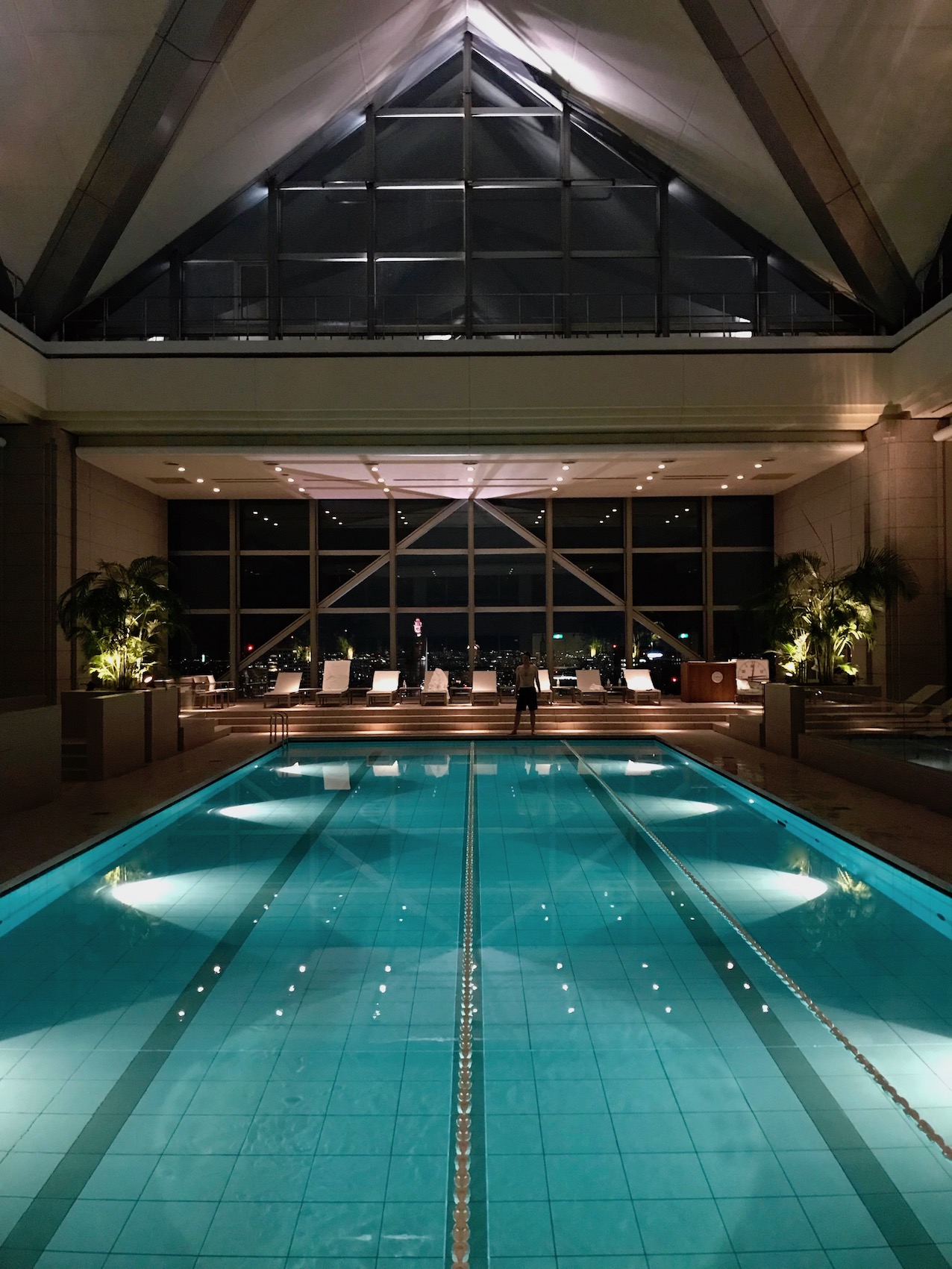 We could have happily stayed in The New York Bar all night but our Park Hyatt guest package also included free access to the luxuriant facilities of Club on the Park. So we headed up to the 45th floor swimming pool, a 65 foot beast of a thing stretching out underneath a colossal glass pyramid. I made sure to stand right on the spot where Charlotte jumps in for a late night dip and poke my head into the adjacent gym where Bob injures himself on the faulty running machine. 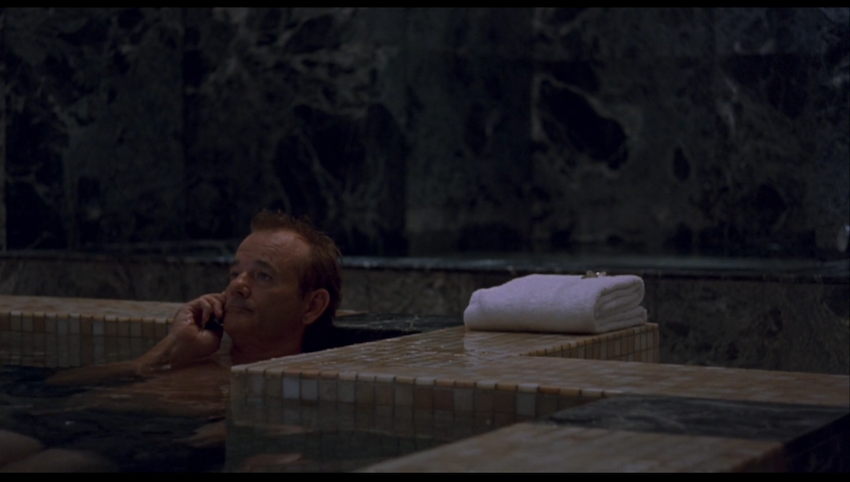 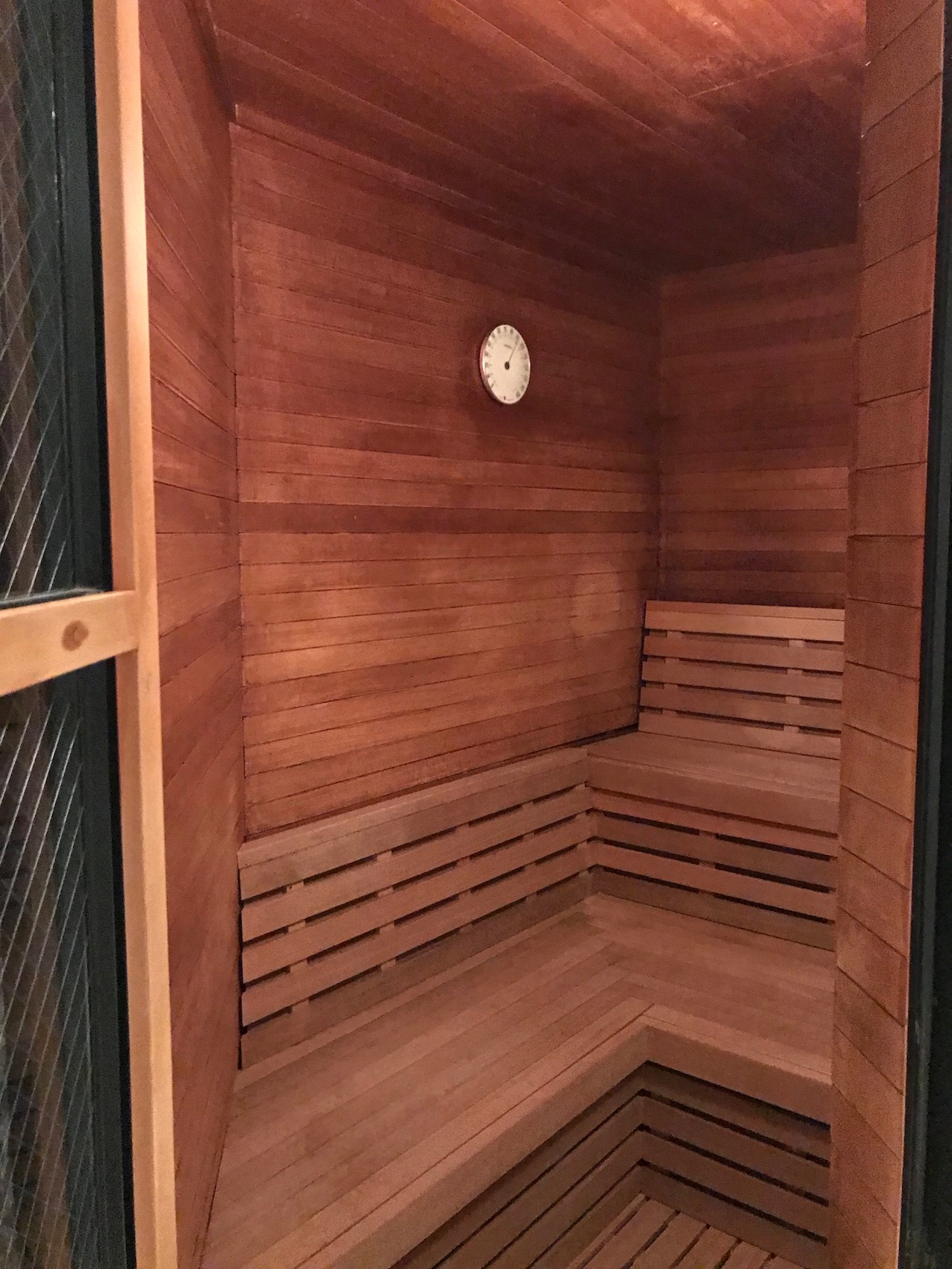 Two floors up from the pool is the Park Hyatt spa with its relaxation rooms and massage parlours. I also popped into the sauna for good measure, and event better, it proved free of naked, chatting German men. 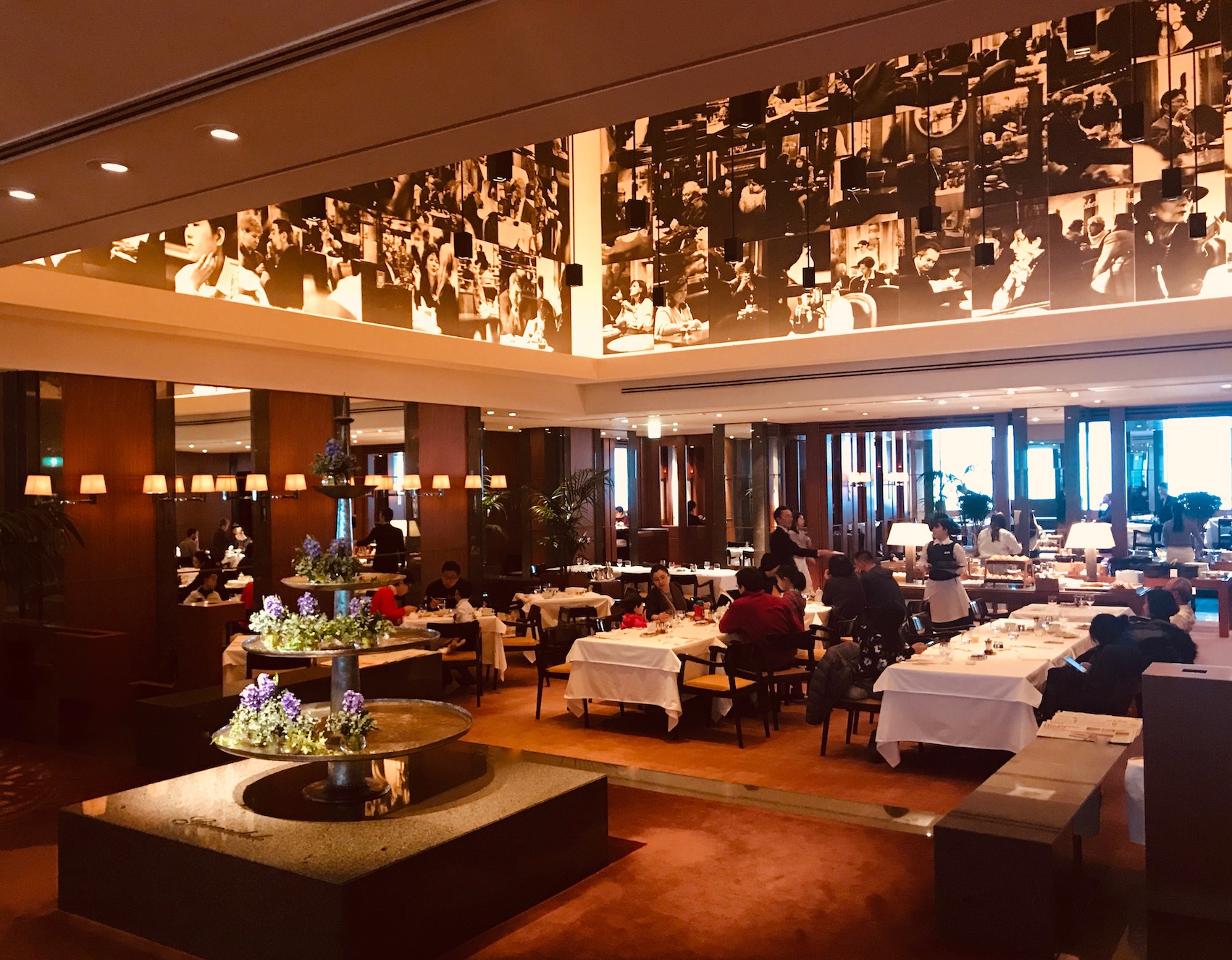 I slept fantastically well that night and no wonder, what with all the spa pampering and a belly full of beers, cocktails and burger. The next morning we were up bright and breezy to tackle Park Hyatt Tokyo’s famously epic breakfast. They gave us a skyline view window table at Girandole Restaurant, an uber-stylish eatery with centerpiece artwork by the French photographer Van Mercer. Take a moment to check it out and you’ll count no less than 144 back and white panels featuring cafe scenes from around Europe. 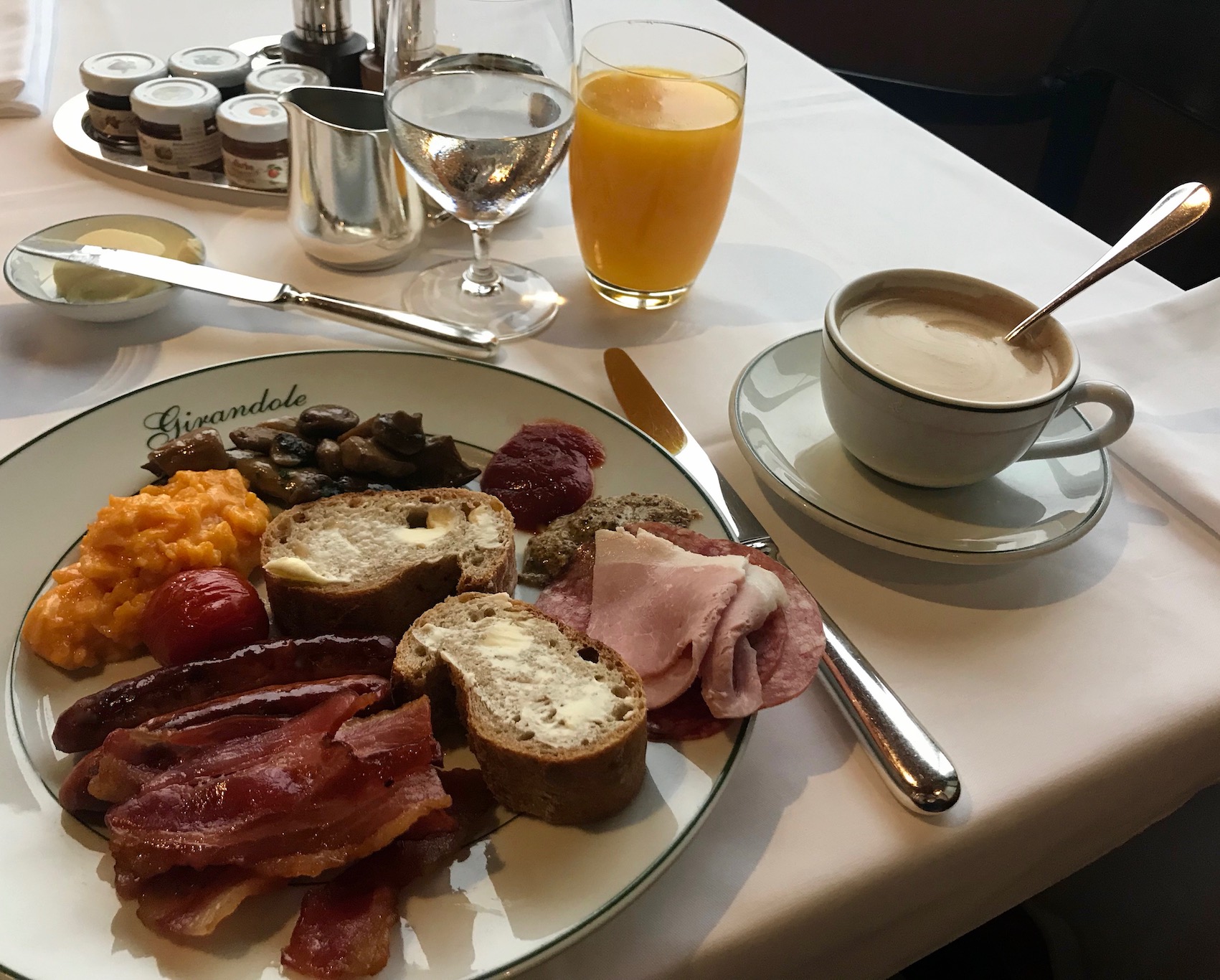 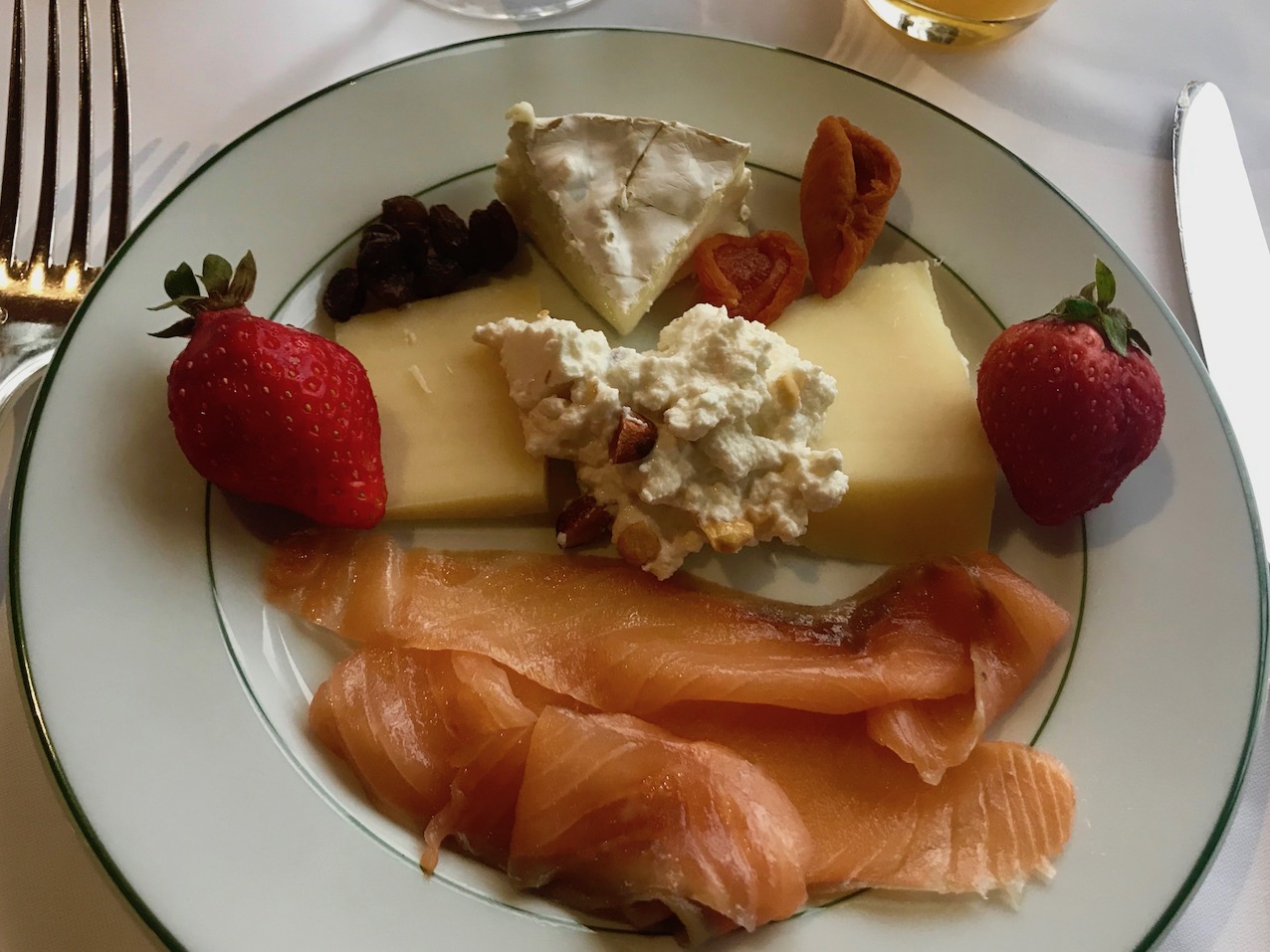 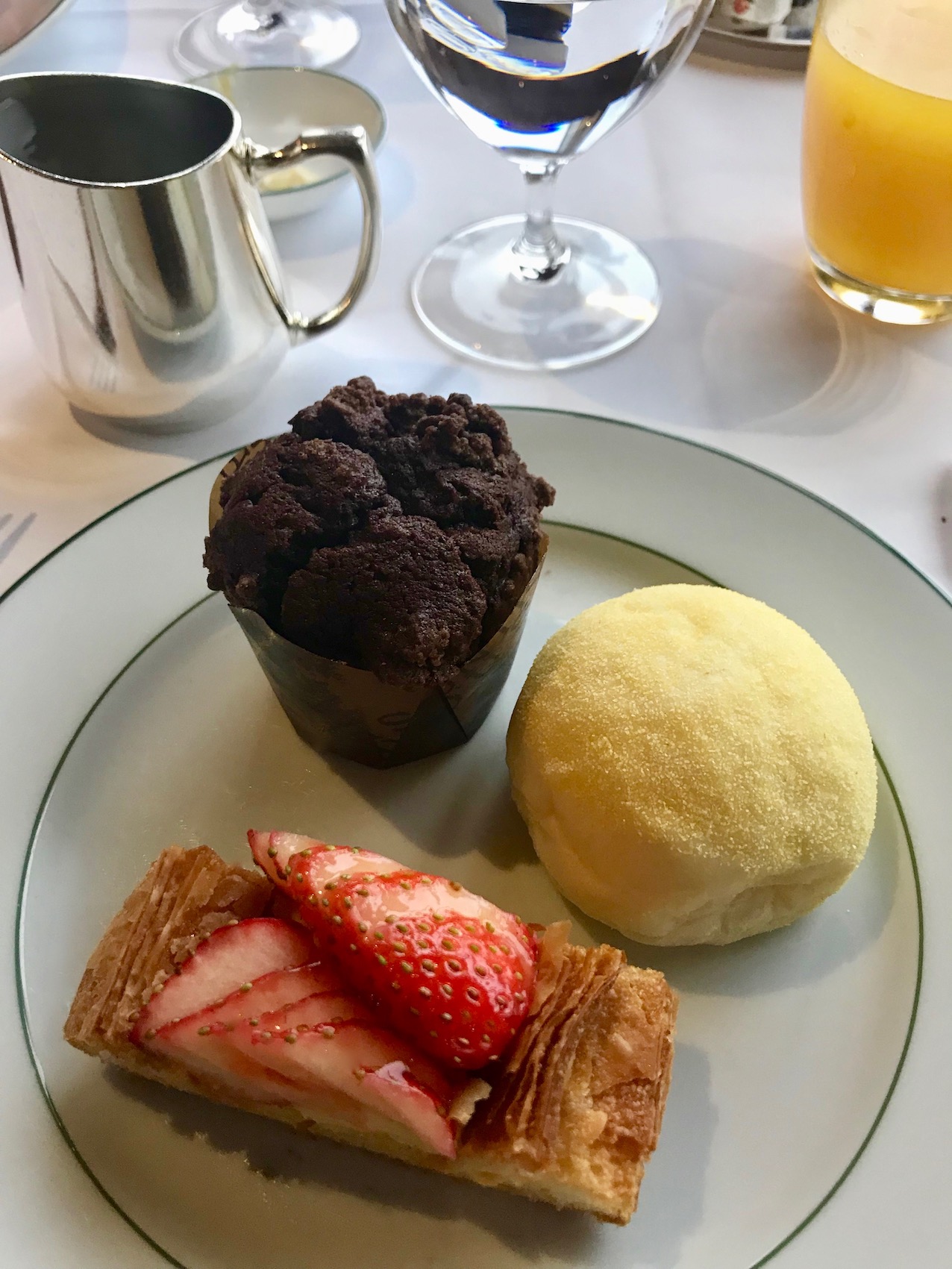 And what about the food? Well it was simply fantastic… and better I think to provide a photo stream rather than waffle on about what was what. Easily the best breakfast I’ve ever had, the kind of food that actually has you regretting the fact that you’re completely full and can’t eat any more.

If you’ve got the budget and want to treat yourself to the best of the best, you’d be hard pushed to find a better hotel in the Japanese capital than Park Hyatt Tokyo. If you’re a fan of Lost In Translation it’s a no-brainer to come here for a drink at The New York Bar. As for me, I’m incredibly fortunate. When I reached out to Kathy I wasn’t expecting much. Apparently they get lots of Lost In Translation requests, but turn nearly all of them down due to the effect it would have on daily operations.