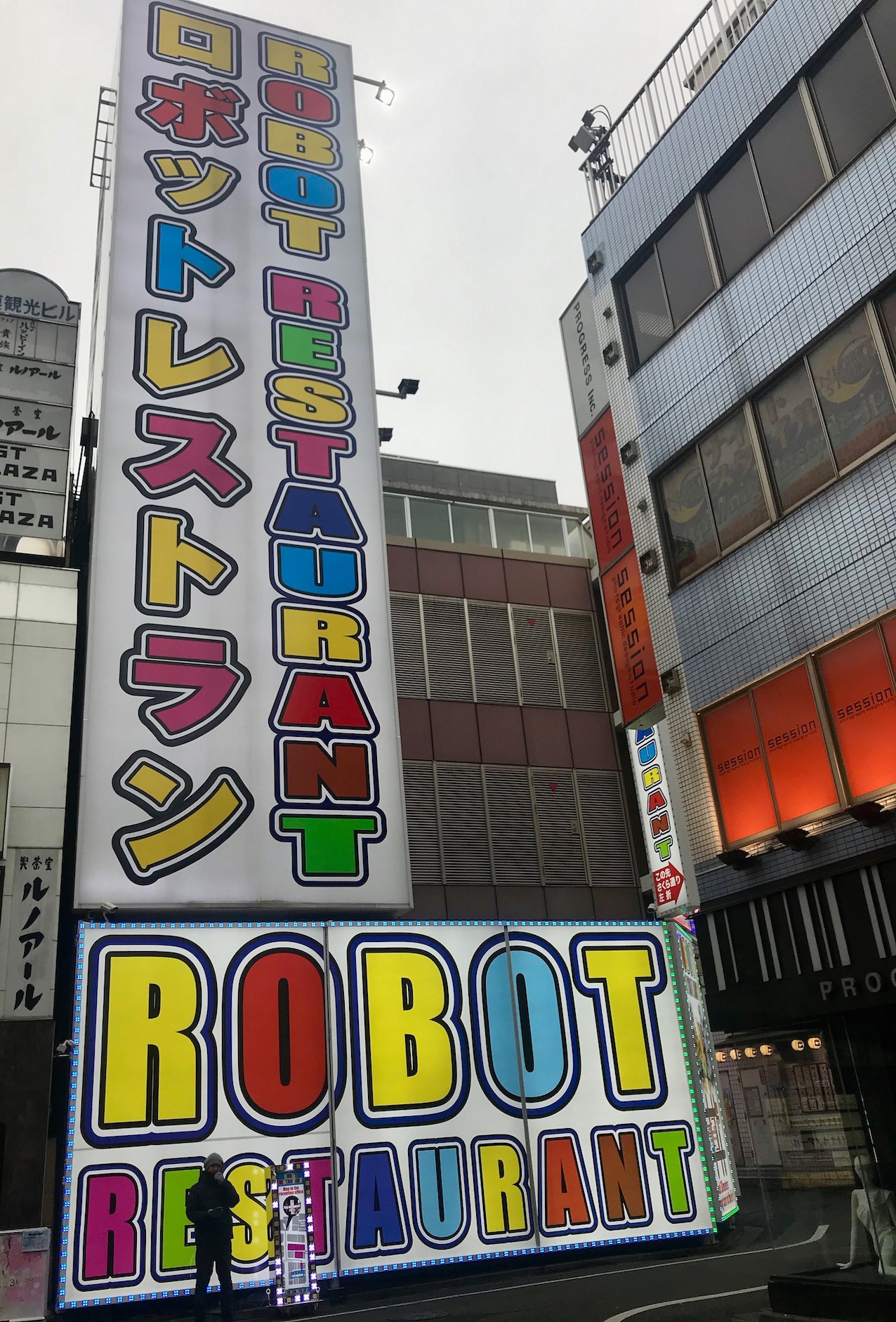 February 2019. Don’t worry about not being able to find Tokyo’s Robot Restaurant. You see… there are a few discreet signs peppered around Shinjuku district to point you in the right direction. It was my last night in the Japanese capital with Wonderboy, who was flying back to Korea the next day. So it felt fitting that after all the crazy things we’d seen and done, it was the daftest most over the top attraction of all that we’d left til last. 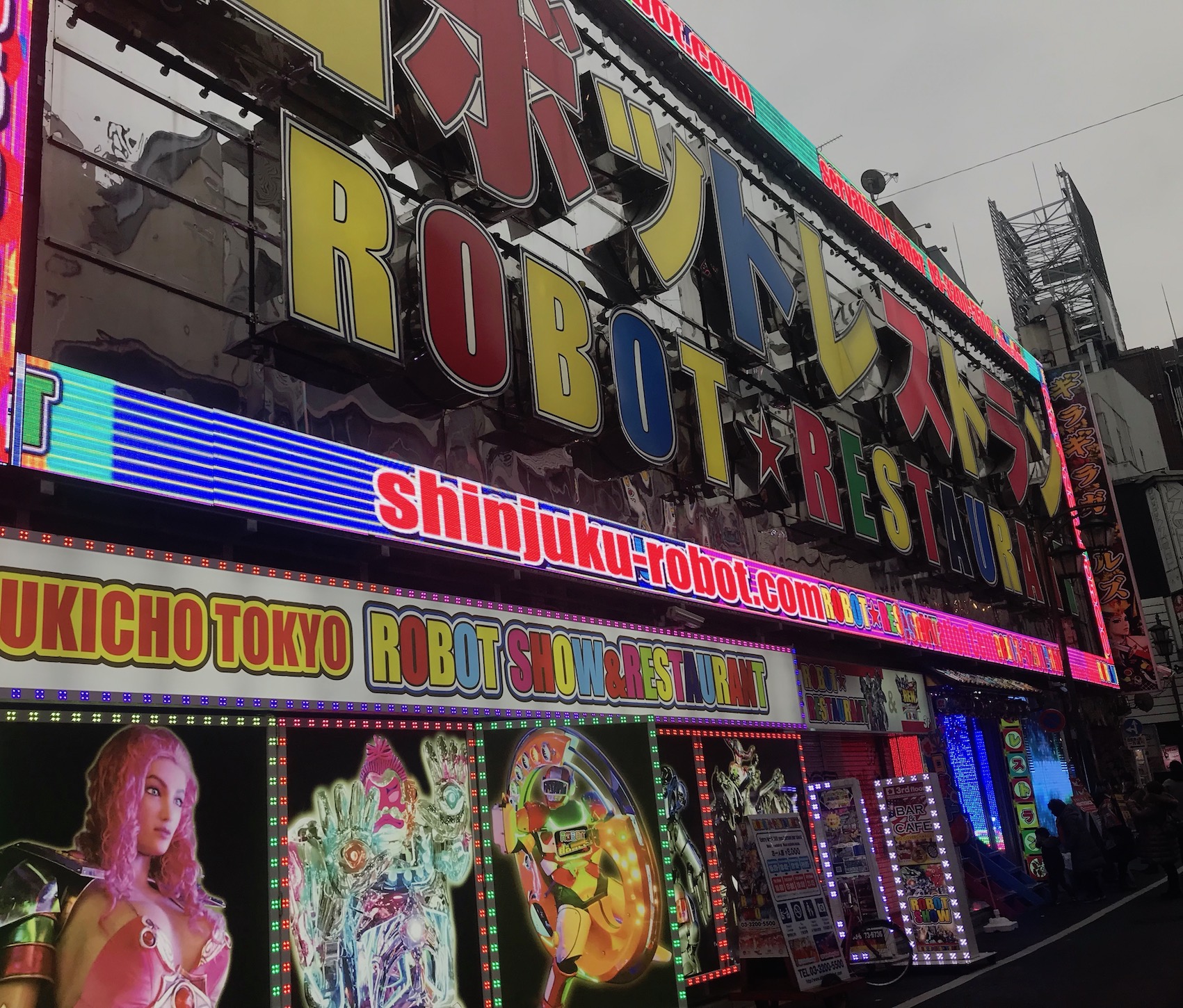 It was a grey, dark afternoon as we arrived outside Robot Restaurant. No matter what the day or indeed whatever the time, every show here is sold out well in advance. We’d booked our tickets through the online tour operator Klook, so all we had to do was pop into the office opposite the theatre and trade in our online booking confirmation for tickets. We also got given a free gift, which oddly turned out to be a pair of Robot Restaurant branded silver nail clippers. 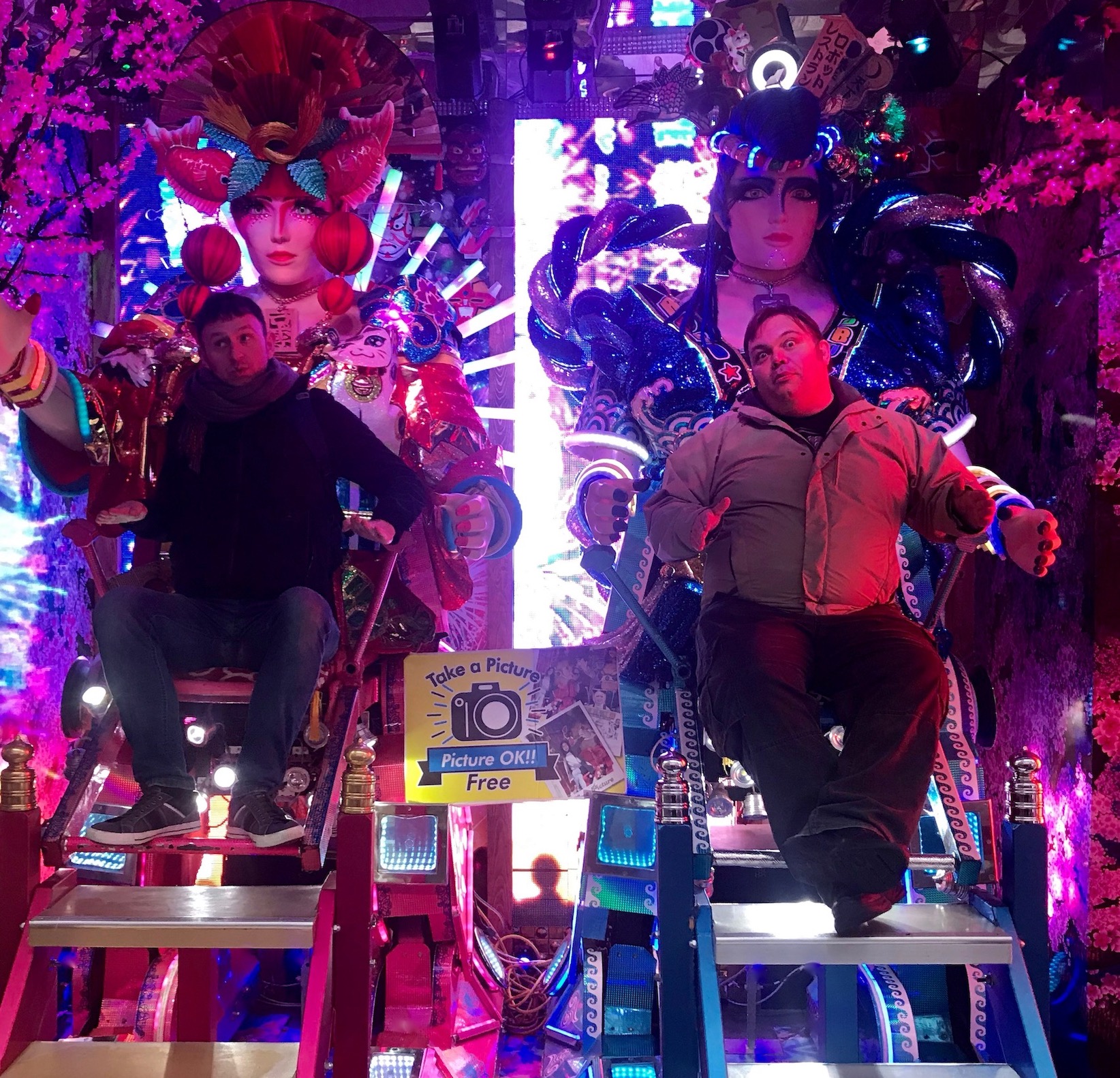 There’s a glut of photo opportunities outside the theatre that kept Wonderboy and I amused before we could actually head inside to soak up a bit of pre-show atmosphere. 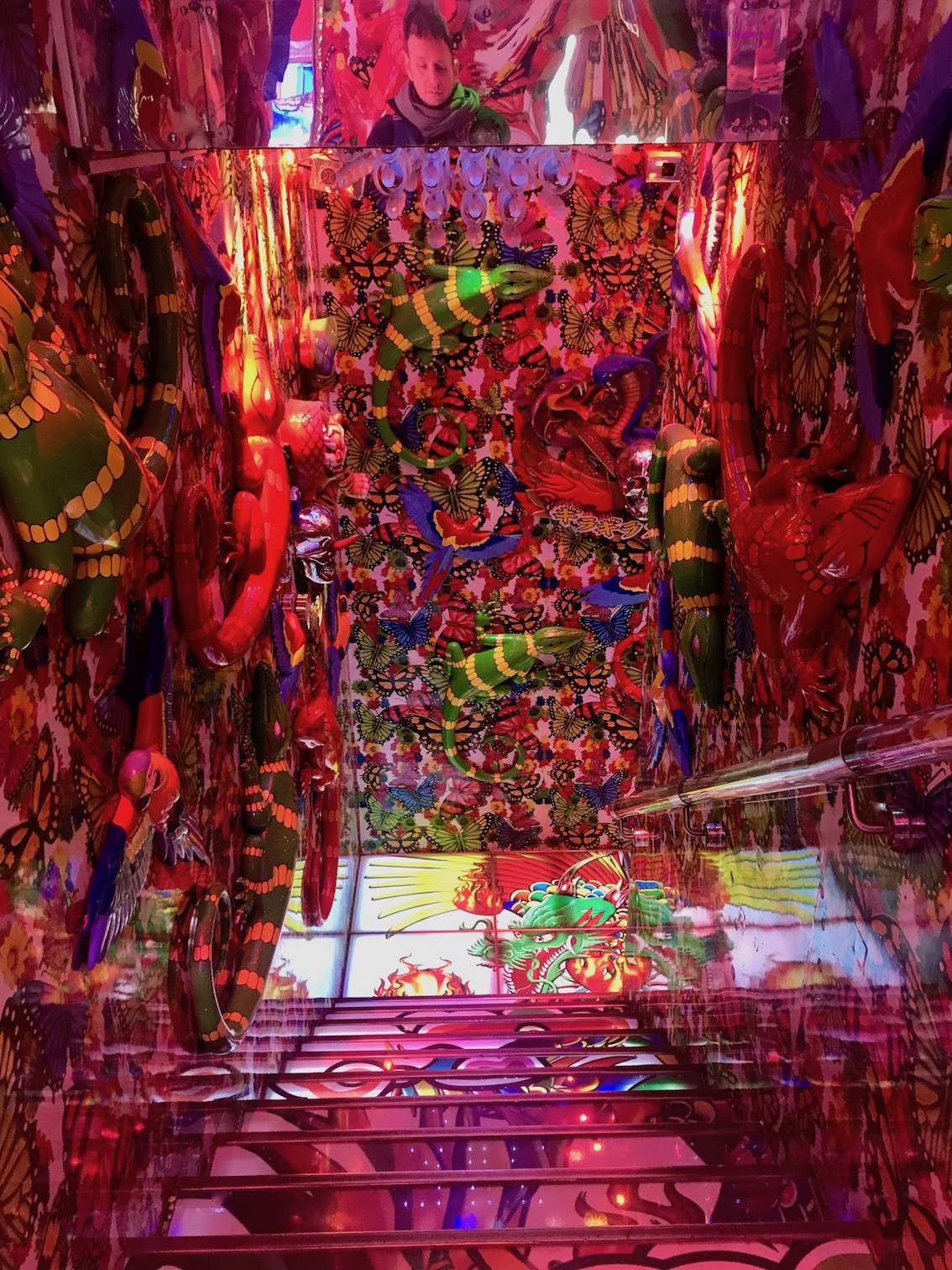 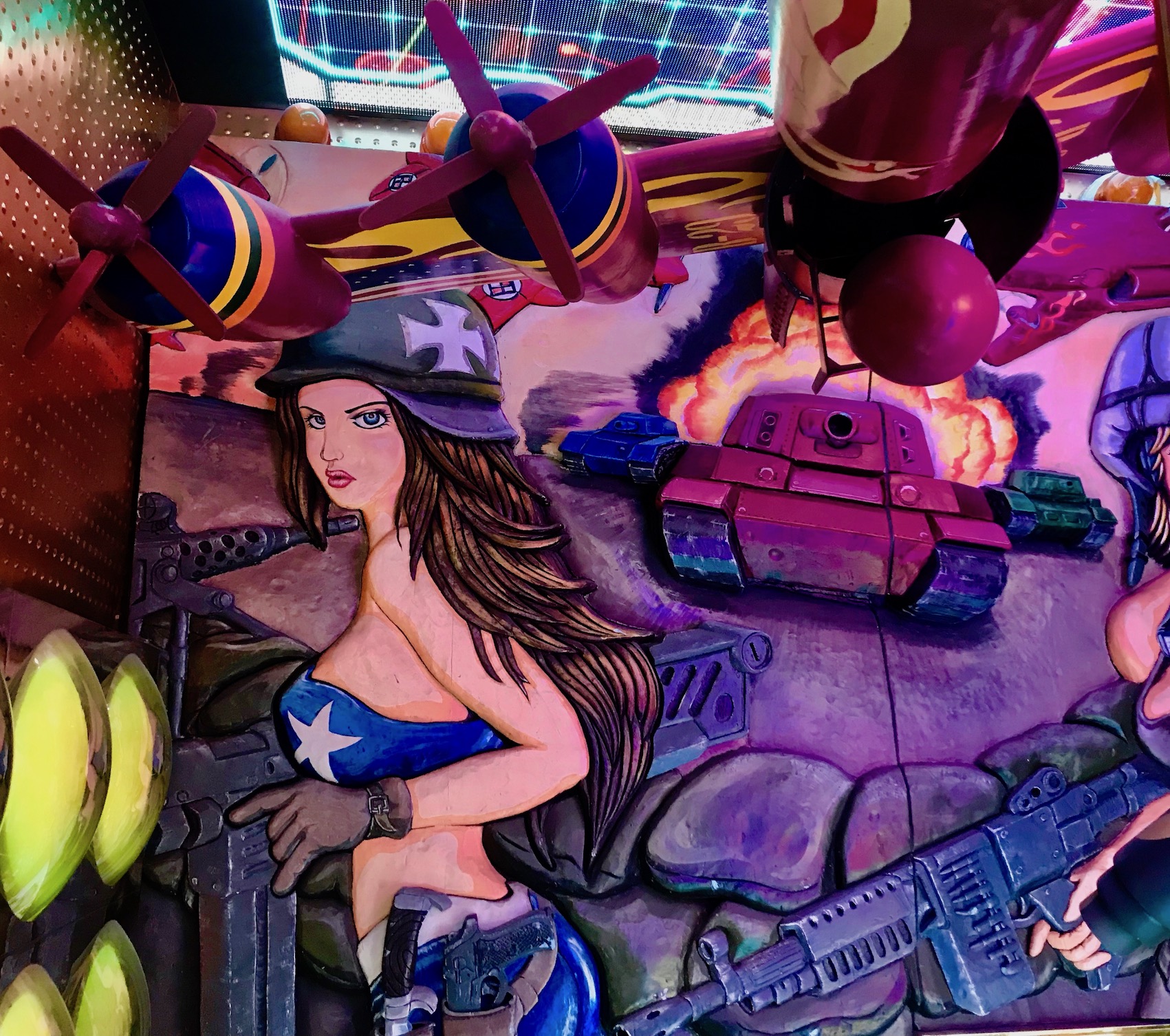 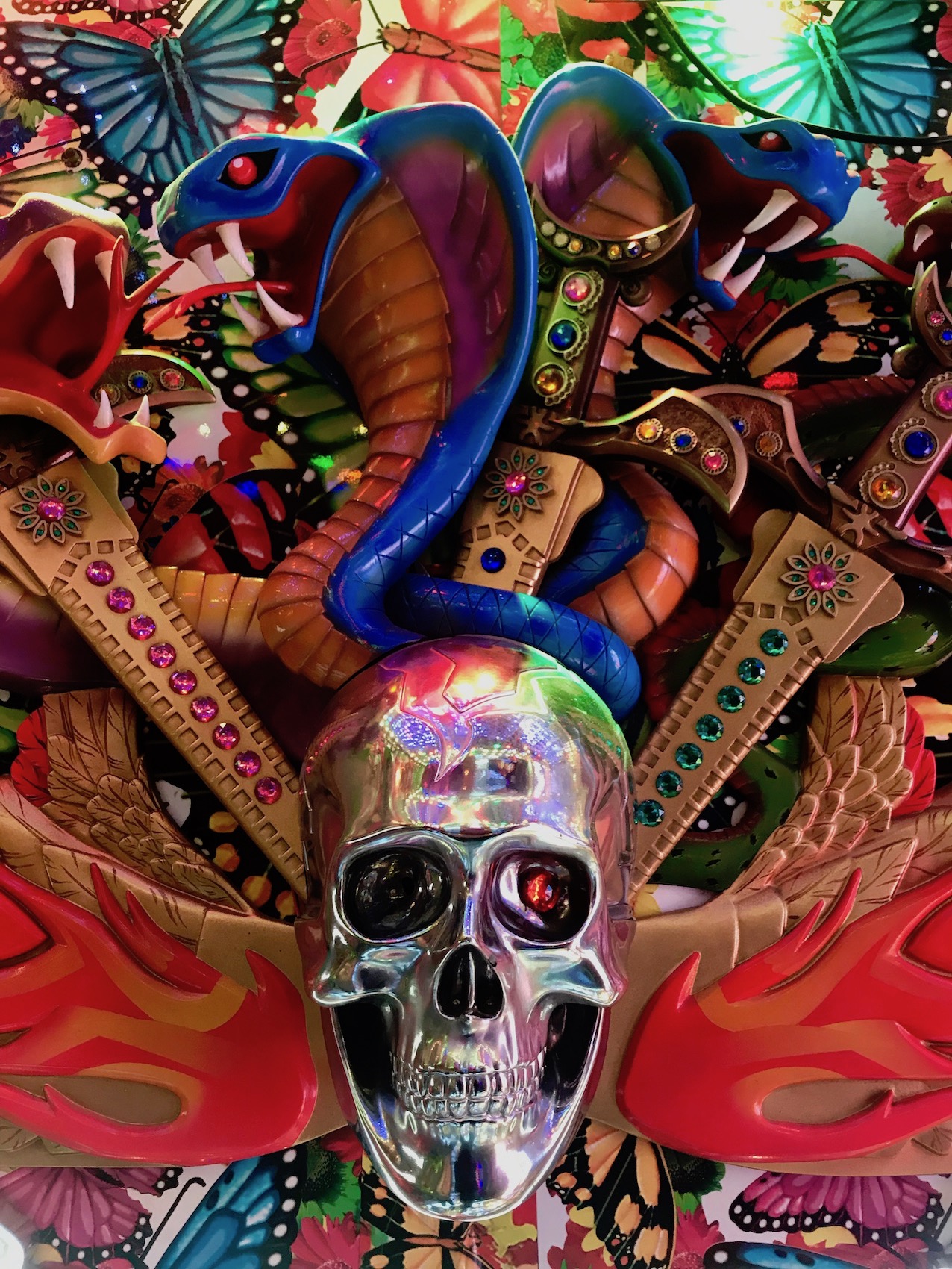 From the moment you make your way down the Robot Restaurant’s corridors and stairwells it’s like stepping into a fantastical alternate reality inhabited by Technicolor snakes, shimmering silver skulls, cannon-firing robot monsters and voluptuous, machine gun-wielding solider babes. All of which served as just a taste of the madness to come… 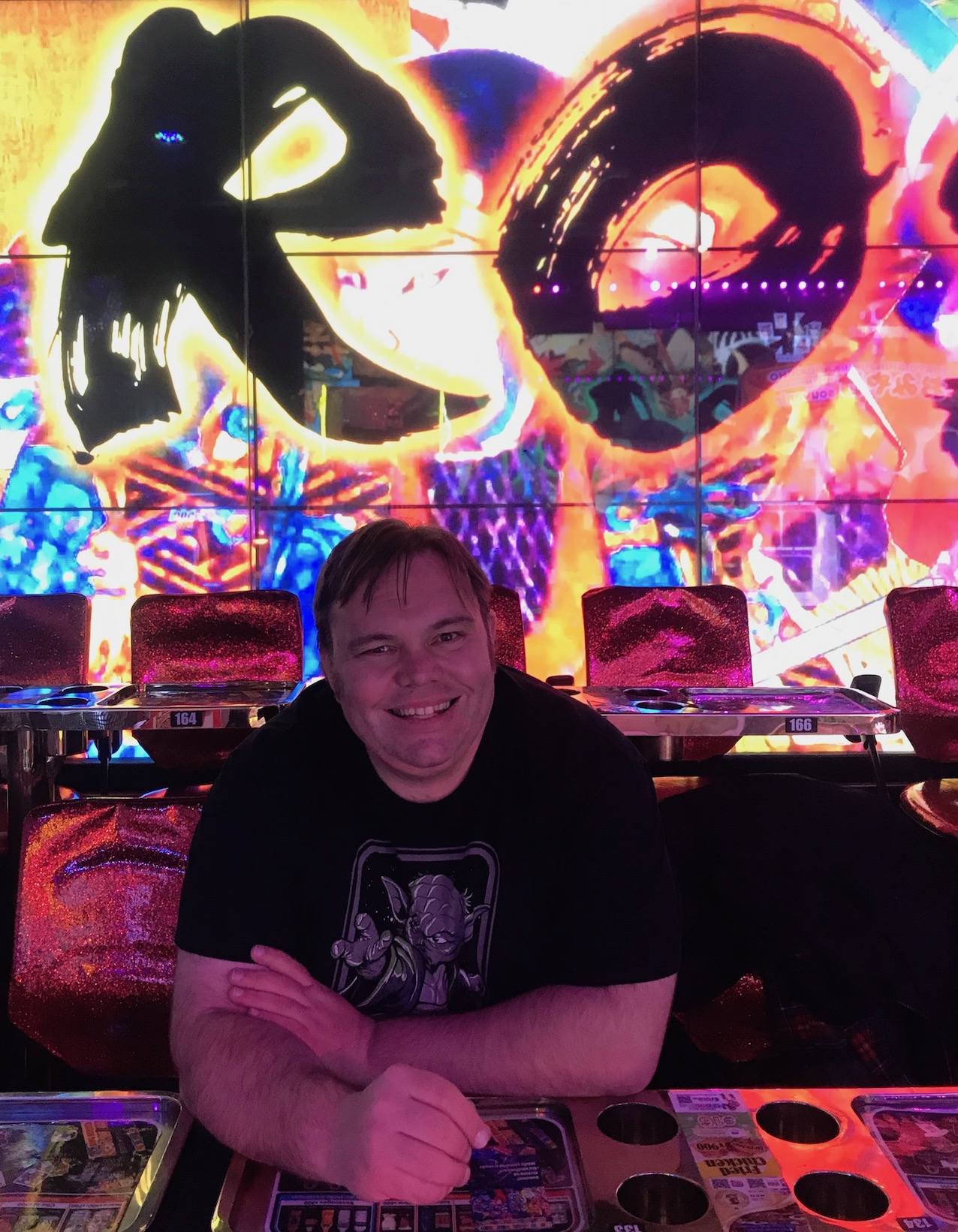 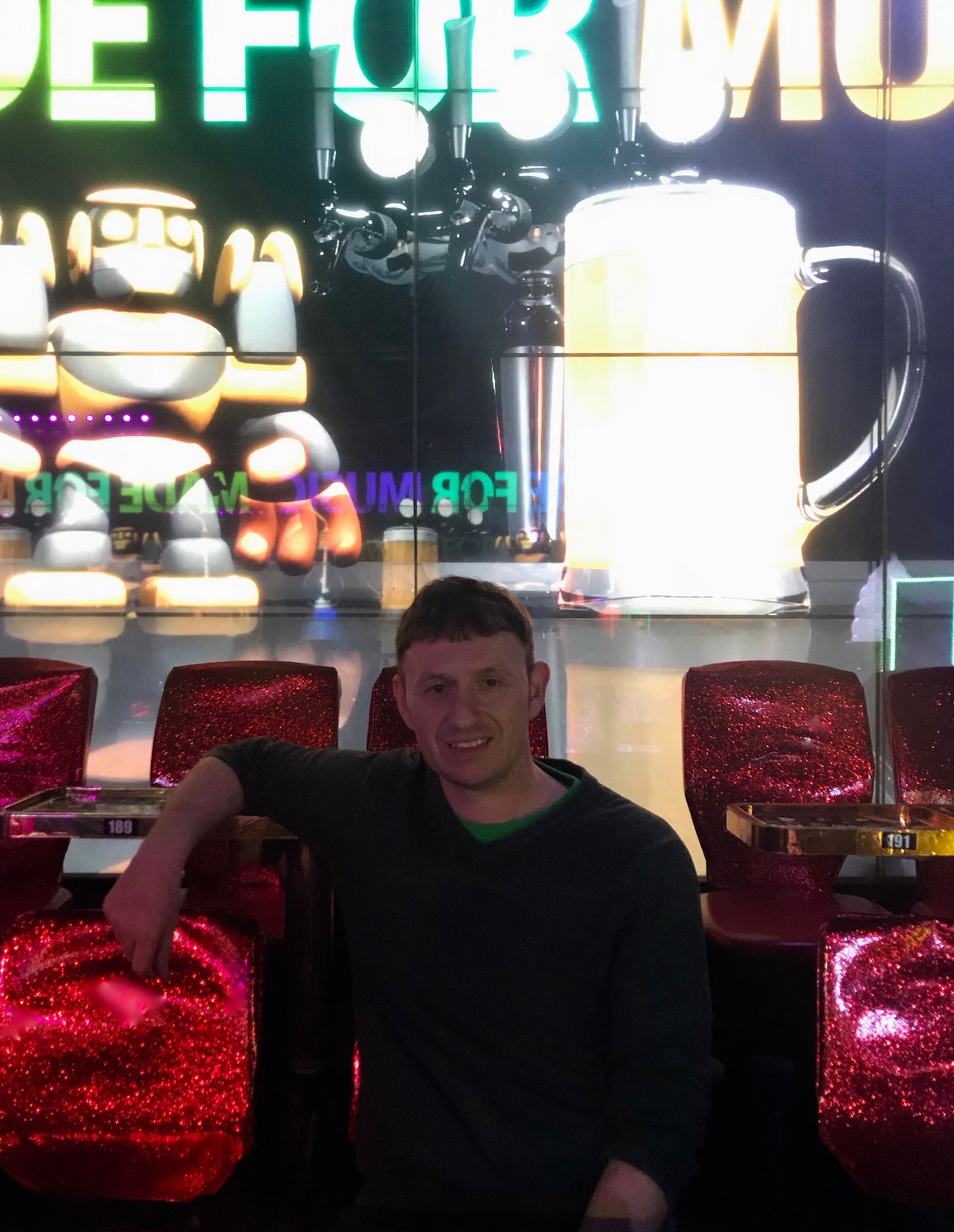 February 2019. Wonderboy and I were among the first people into the theatre that afternoon. Bathed in a deep purple glow and soundtracked by thumping dance music (what else?), we located our seats and settled in as people began rapidly streaming into the arena.

With its reputation as The craziest show in town, we decided to grab a couple of beers to help get us into the Robot Restaurant spirit. Had we been so inclined, there was also deep fried chicken, hot dogs, churros and Robot Sundae ice creams. 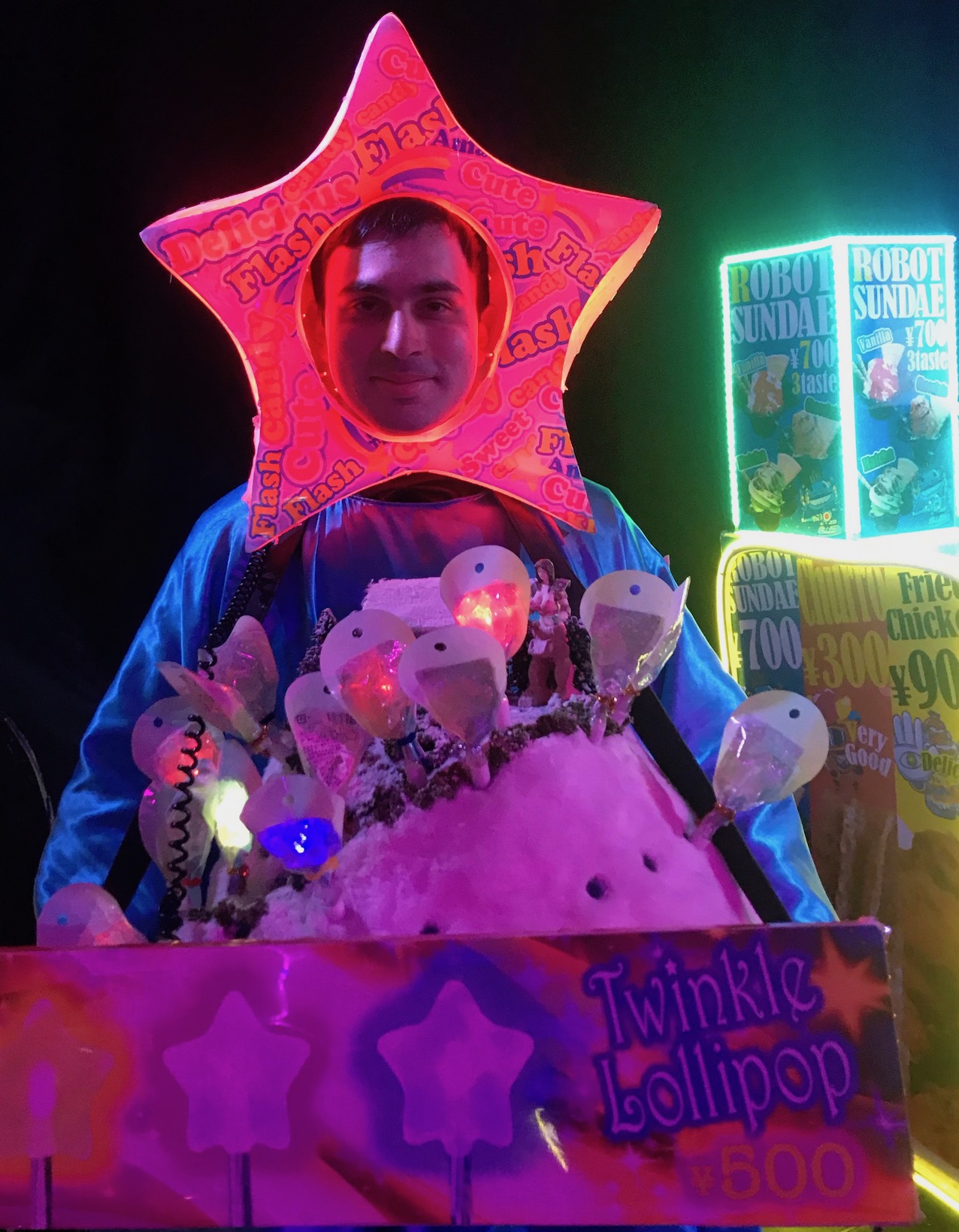 “Kill me now!” – The Robot Restaurant.

Elsewhere, I spied a dude dressed in a star-adorned, neon-blue silk onesie selling Twinkle Lollipops. But it was his lavish headwear that really stole the show, a giant luminous pink star that shone brightly in stark contrast to his tired expression. Kill me now, it said. And then the lights were dimming and… with showtime closing in… the atmosphere was electric.

At this point you might be forgiven for wondering what the Robot Restaurant show is actually about? Even as someone who’s witnessed the whole thing first-hand I find myself struggling to explain it, plus to be honest with you I don’t think the show’s creators gave it much thought themselves. Transporting the audience into a far-flung dystopian future, this is a world run by rival robot factions. Sometimes these armies are partying and dancing together in a festival of self-congratulatory joy, the rest of the time they’re kicking the shit out of each other. And that’s all you really need to know. The show starts off with a jaw-dropping musical parade of jamming guitarists, flag-waving dancers and manic drummers. A bunch of them sit atop a robot brandishing a large sword while elsewhere a horned, blue-haired female lashes away at her drums and cymbals straddling some kind of ghoulish Pokemon.

From there things soon unfold into a dizzying, eye-popping onslaught of battling monsters, bikini-clad warriors, fire-spewing dragons, hopping ninjas, stomping dinosaurs, mechanical waxworks, people dressed as robots, robots dressed as people and… well… a whole host of other crap I’m unable to accurately describe. Don’t worry about trying to work it all out, just sit back and marvel at the most batshit show you’re ever likely to see. Trust me, you’ll hardly know where to look and then at some point a giant TV screen attached to a float trundles by and you get to wave at yourself onscreen from the comfort and safety of your ringside seat.

Watching the Robot Restaurant show is ridiculous fun but also utterly exhausting, so you’ll be grateful for the little interludes that come along. You can get your breath back and reflect on what you’ve seen with utterances like “wow!” and “what the **** was that all about?” These breaks also allow the performers to change costume, the next set of mechanical beasts to be lined up and of course the food vendors do another circuit around the audience.

The final sequences of the show were the maddest of all. Among the relentless splurge of Michael-Bay-like-visual-diarrhea on offer was a giant, squawking mosquito, a Teenage Ninja Mutant Turtle (?) and a fluffy winged princess who gets bazooka-d by a dinosaur. And then it was over, the audience clapping, cheering, whistling and laughing as the last of the performers trooped off and the lights came on. 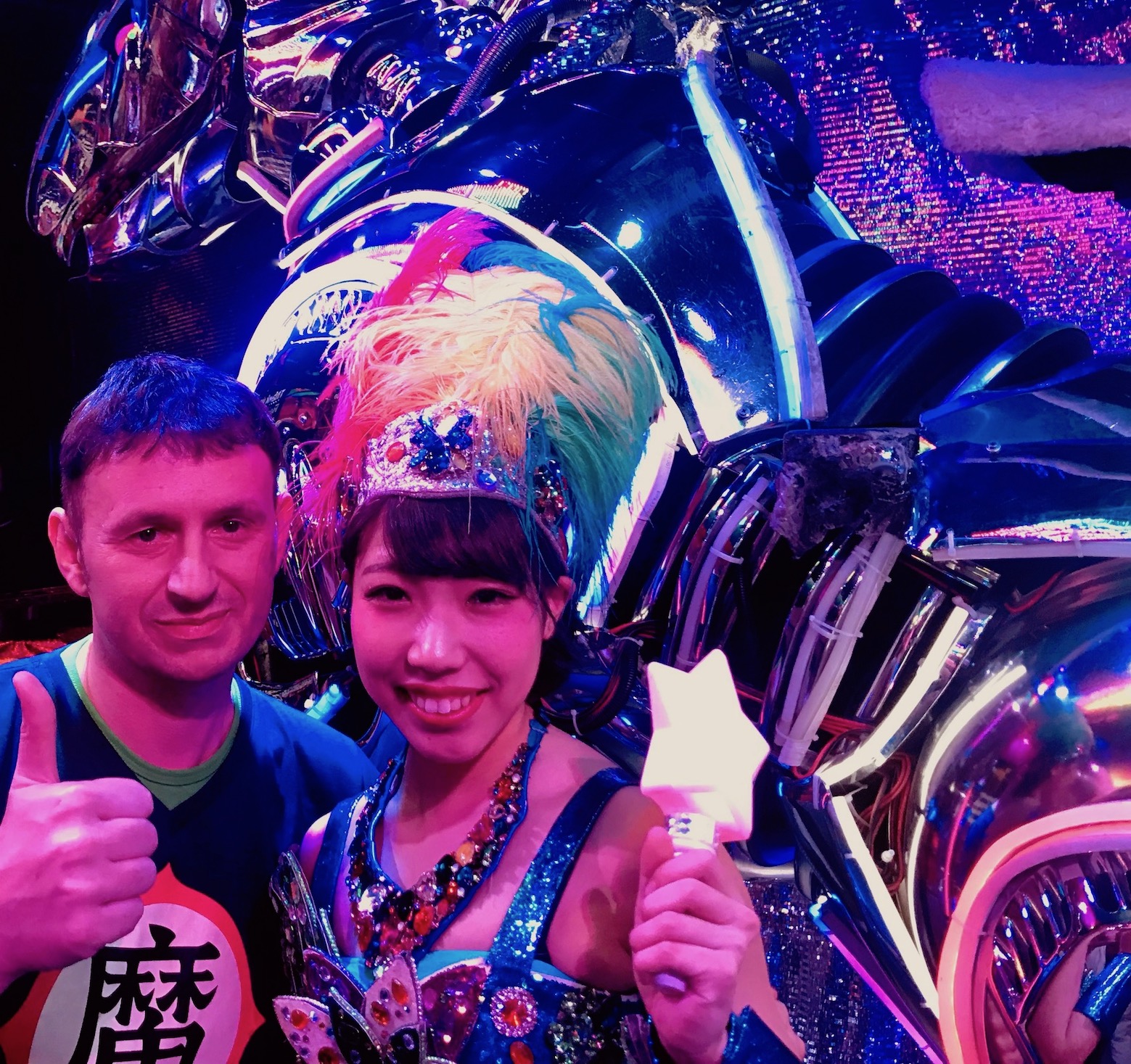 Meet the performers – The Robot Restaurant. 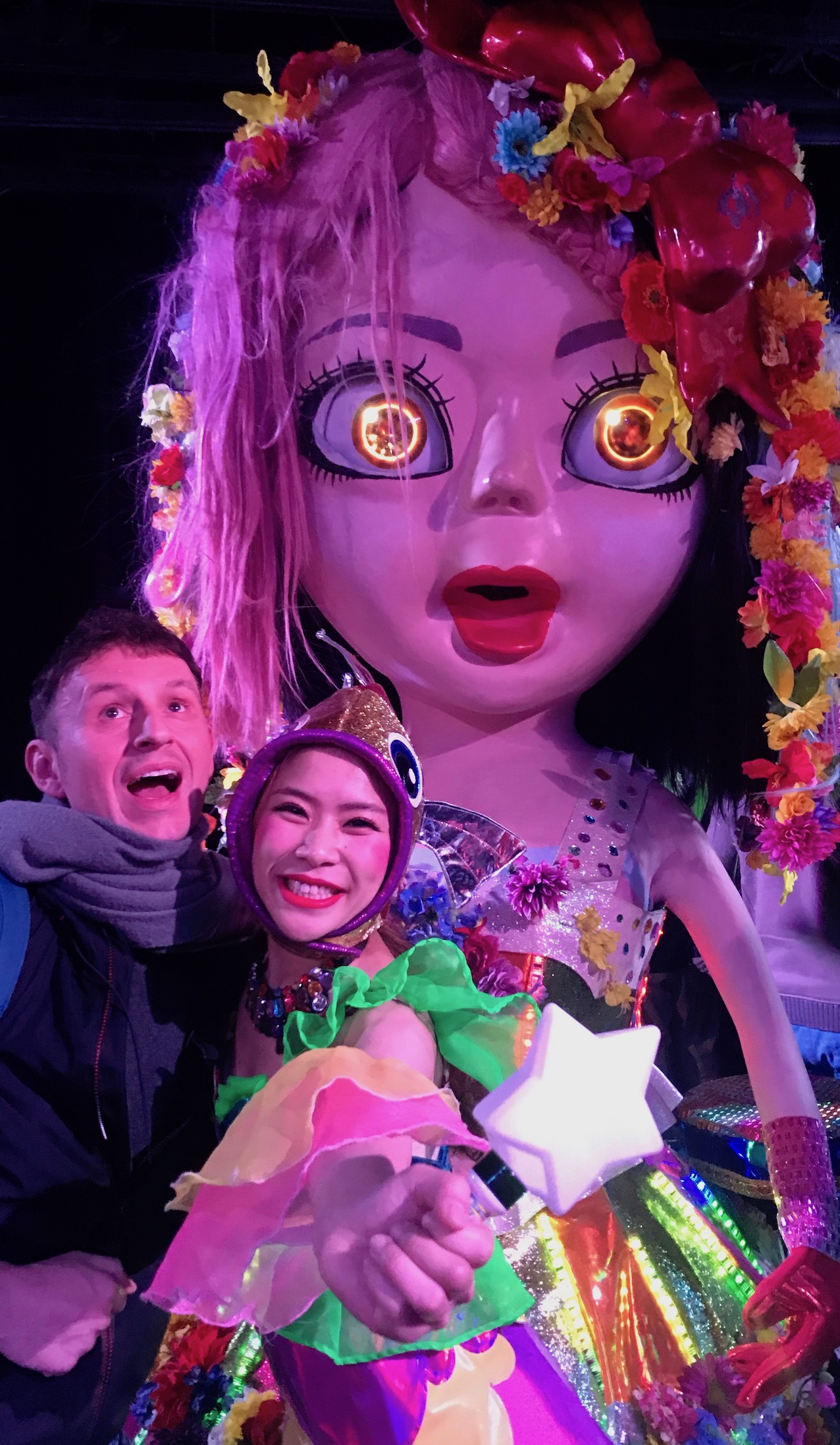 Meet the performers – The Robot Restaurant.

Some select Robot Restaurant performances come with a photo opportunity with the performers and their machines. But be quick, because this process is just as chaotic as the show itself. There’s no system, they’ll hang around for exactly five minutes not a second longer and it’s pretty much every man for himself. 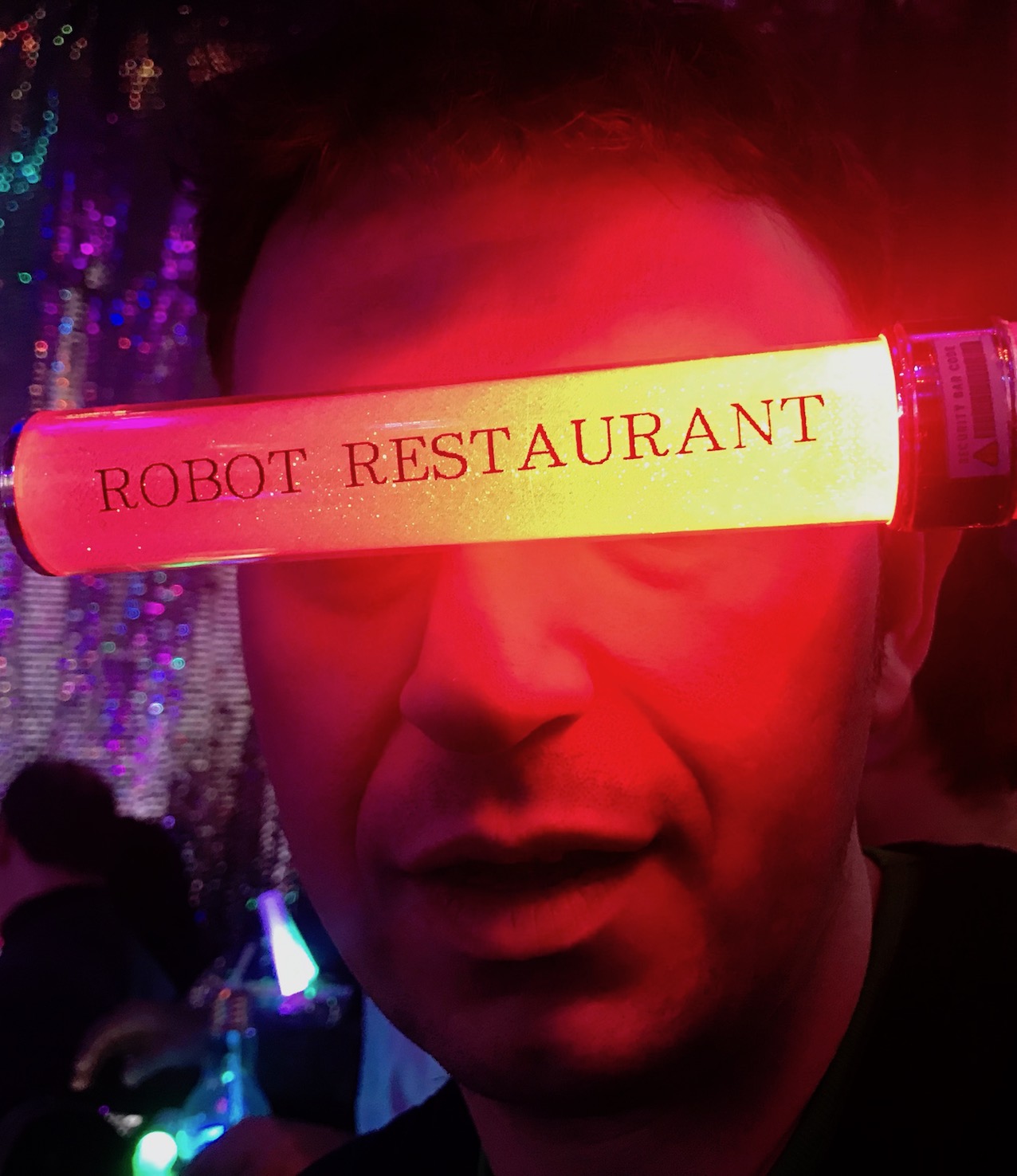 The Robot Restaurant is located in Tokyo’s lively Shinjuku neighborhood, home to some of the city’s best bar streets, not to mention the red light district! We reserved our seats through Klook, who offer a number of different packages depending on times, where you want to sit, if you want food and whether or not you’re fussed about meeting the performers.