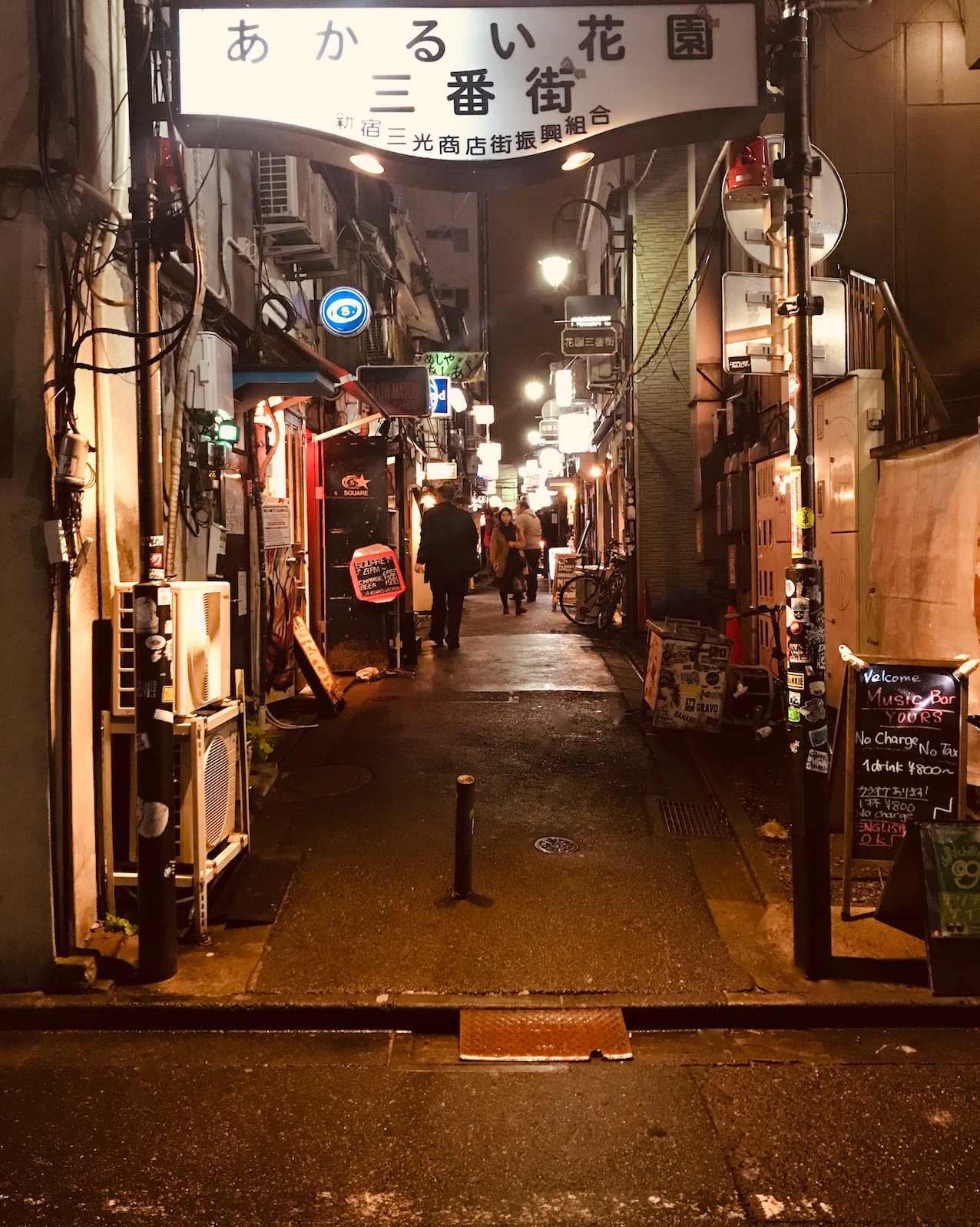 February 2019. After an unforgettable week exploring the Japanese capital it was finally time for Wonderboy to say goodbye to Tokyo. For his grand sendoff we’d settled on beers in the city’s famous Golden Gai bar neighbourhood in Shinjuku district. A ramshackle network of six dimly lit narrow lanes packed with tiny themed dive bars, Golden Gai is said to play host to the city’s most interesting and atmospheric nightlife. 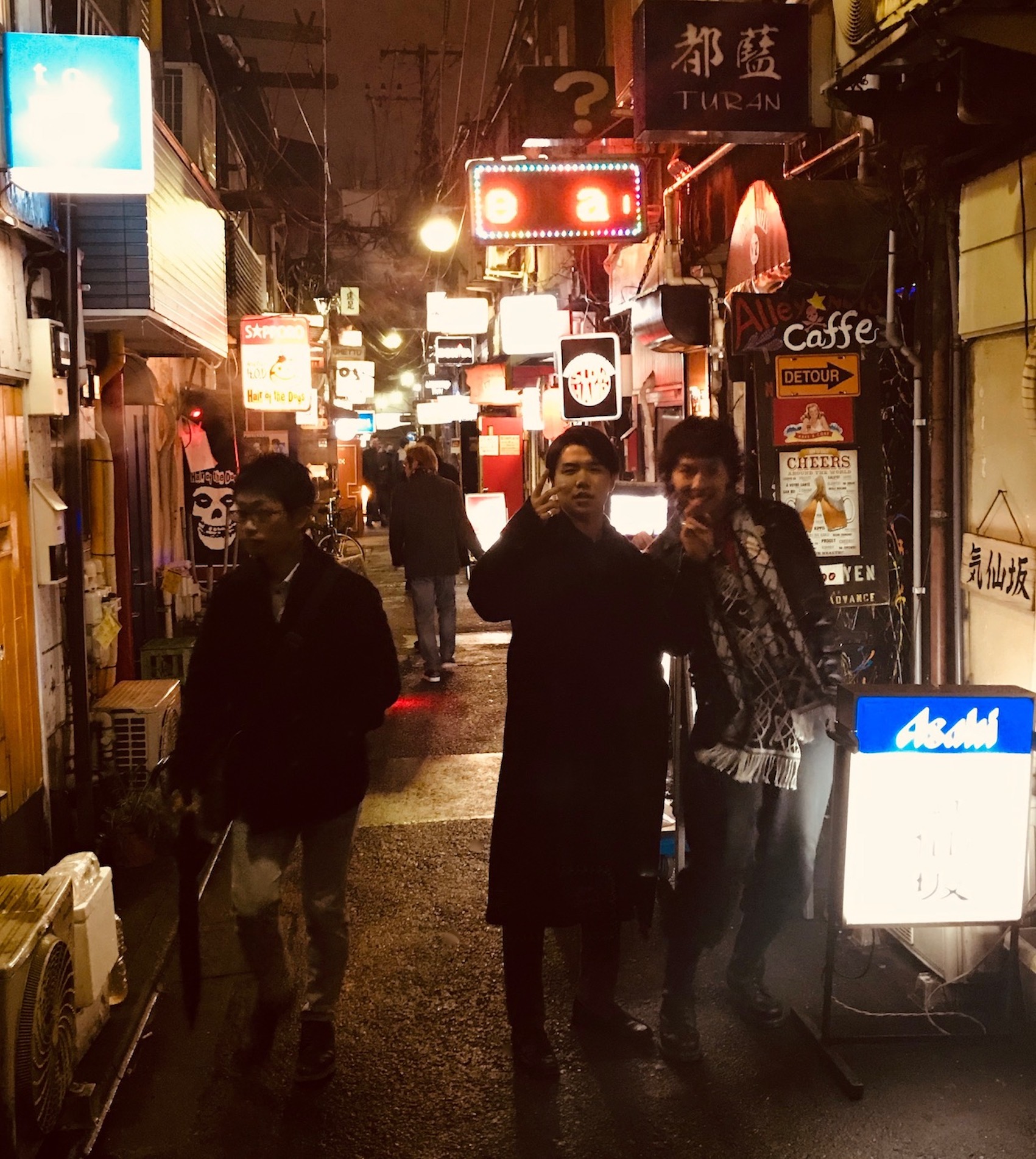 Golden Gai Bar District is so damn fascinating I’d say it’s worth coming here even if you don’t plan on drinking. The area dates back to the early 1900s when it became Tokyo’s epicenter for seedy bars, prostitution and black market trading. But fear not today the area is perfectly safe, even if visually it appears to have retained a bit of edge. The bars here are crammed elbow-to-elbow and can be accessed via trapdoor-like steps, steep staircases and dank corridors. 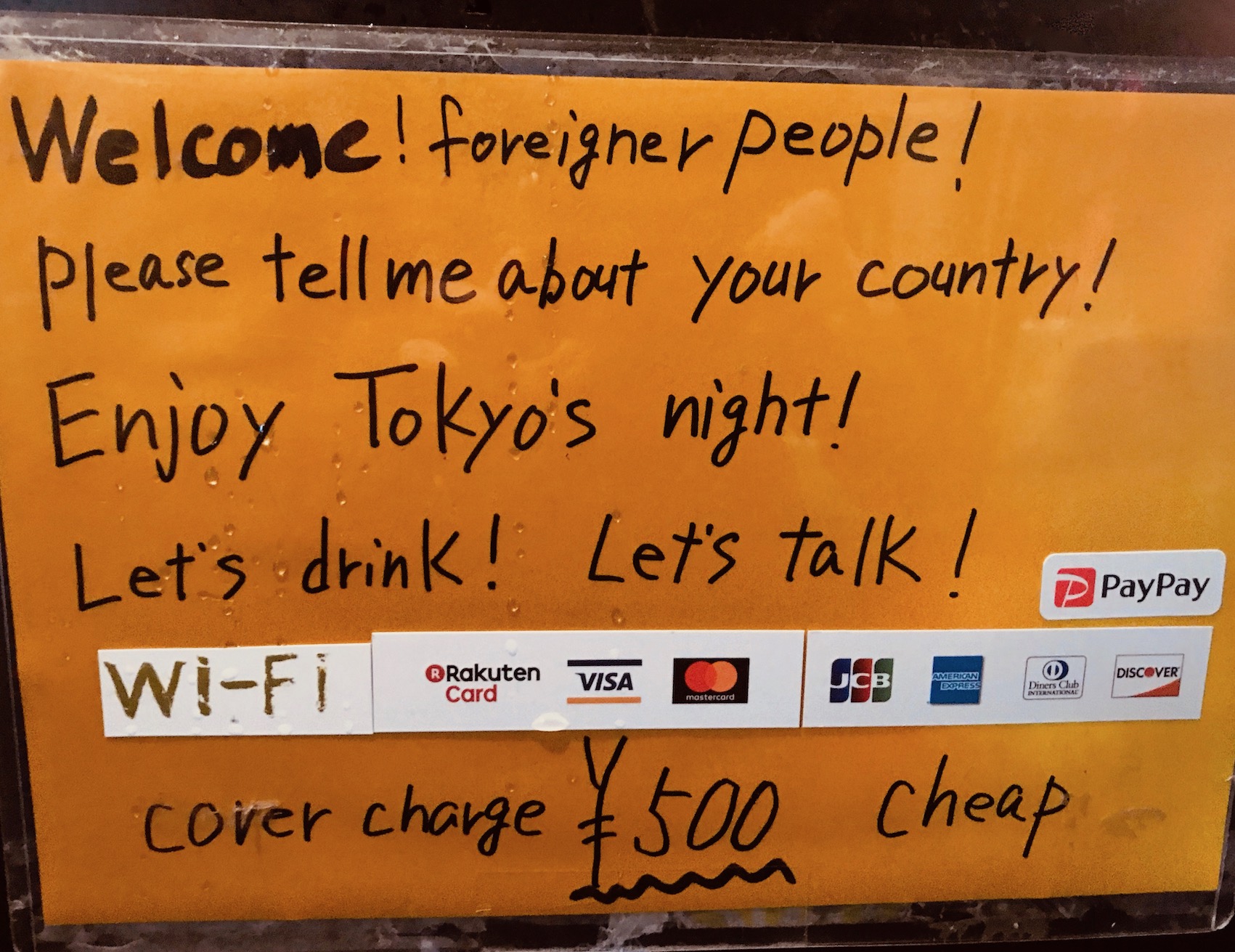 February 2019. The first things you need to know about Golden Gai is that a) most bars apply a cover charge just to get in the door and b) not every establishment welcomes foreigners. So keep your eyes peeled for the signs outside, which will nearly always give you a rundown of the state of play. 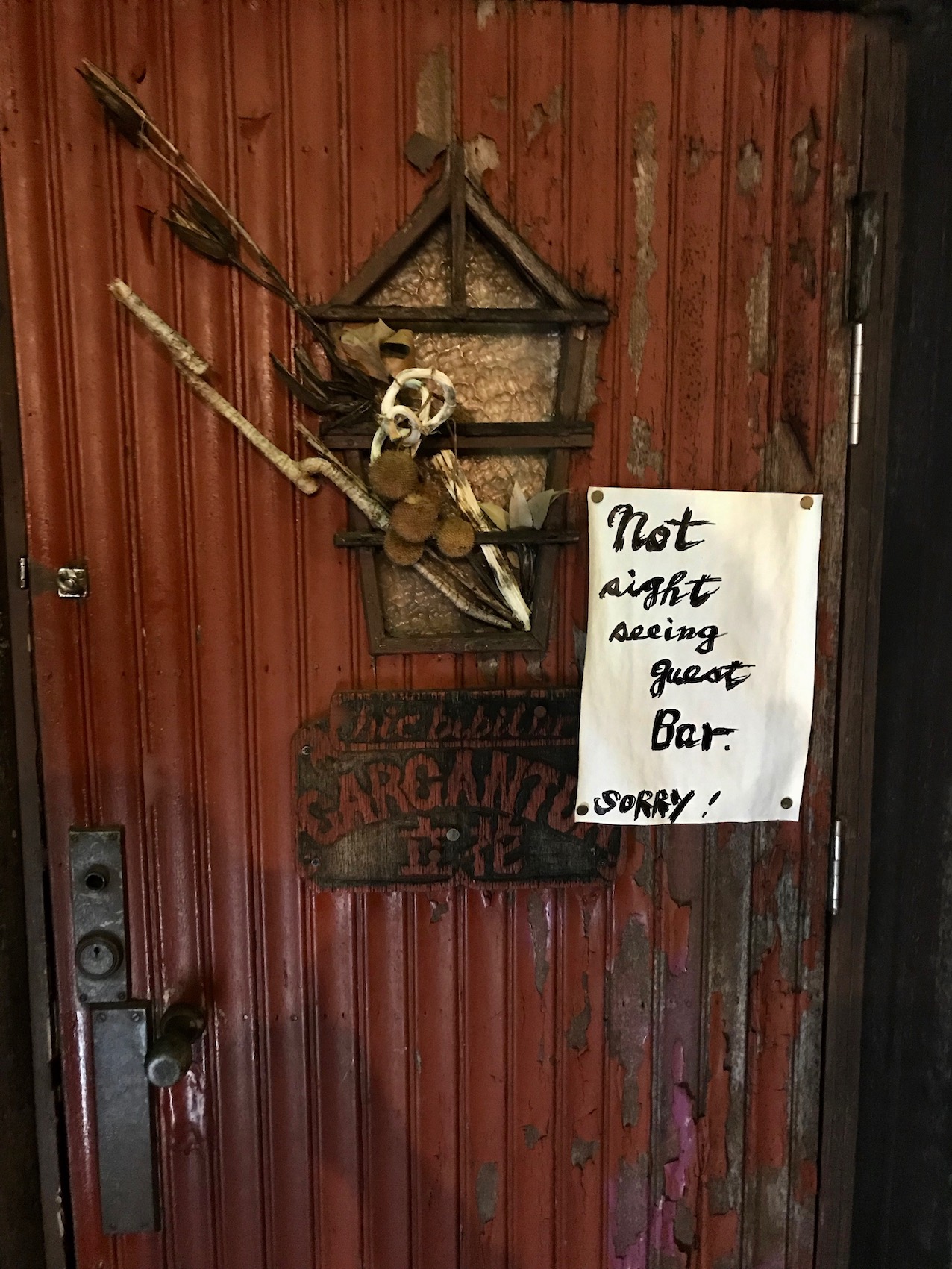 It’s also worth stating that not every building here is a bar, which has clearly been a source of annoyance and frustration for some Golden Gai residents! 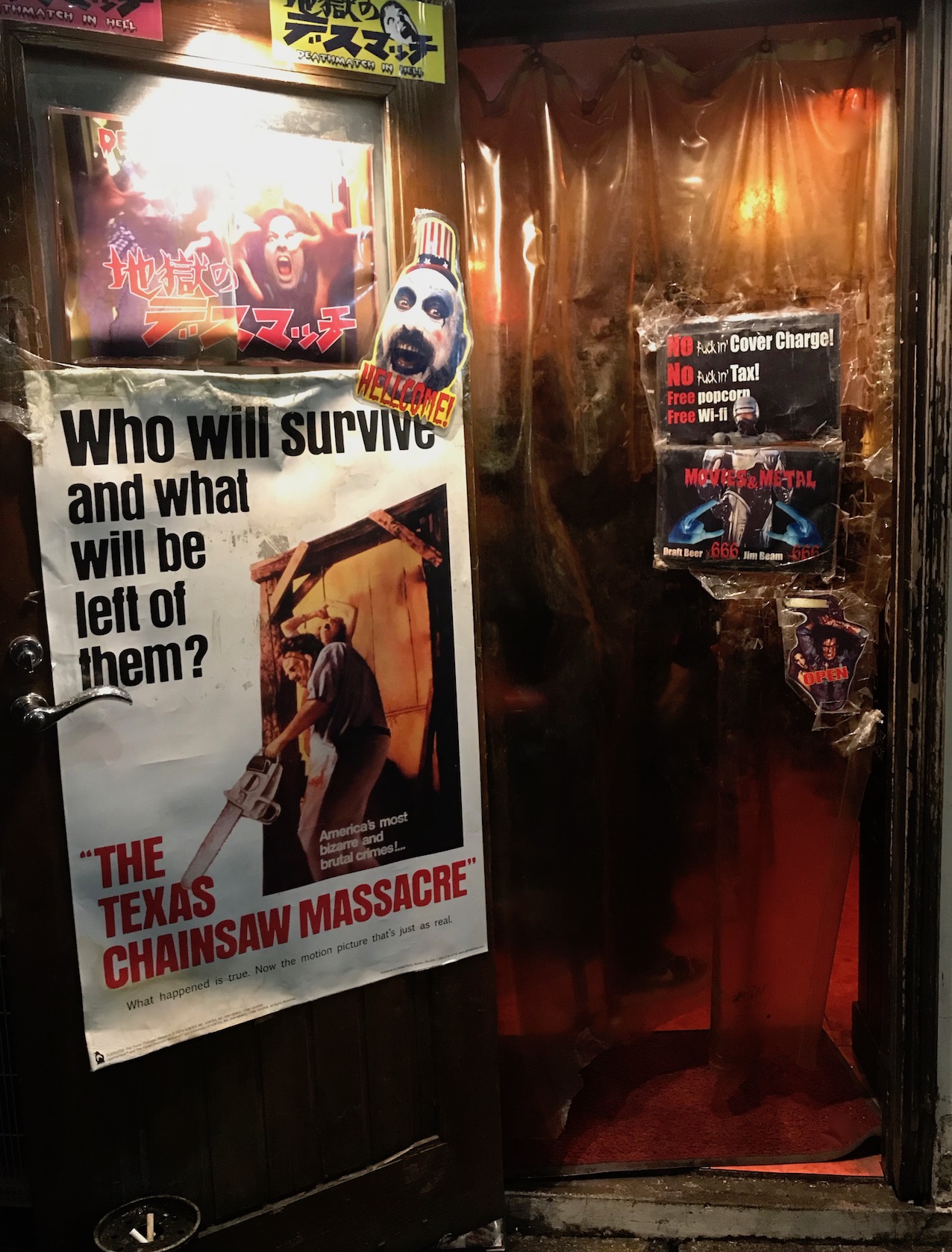 February 2019. Even a cursory stroll around Golden Gai shows there’s a bar to suit just about every theme and taste. Horror fans will find a few gruesome pubs to hang out in, such as Death Match in Hell, with its wall-to-wall horror memorabilia. 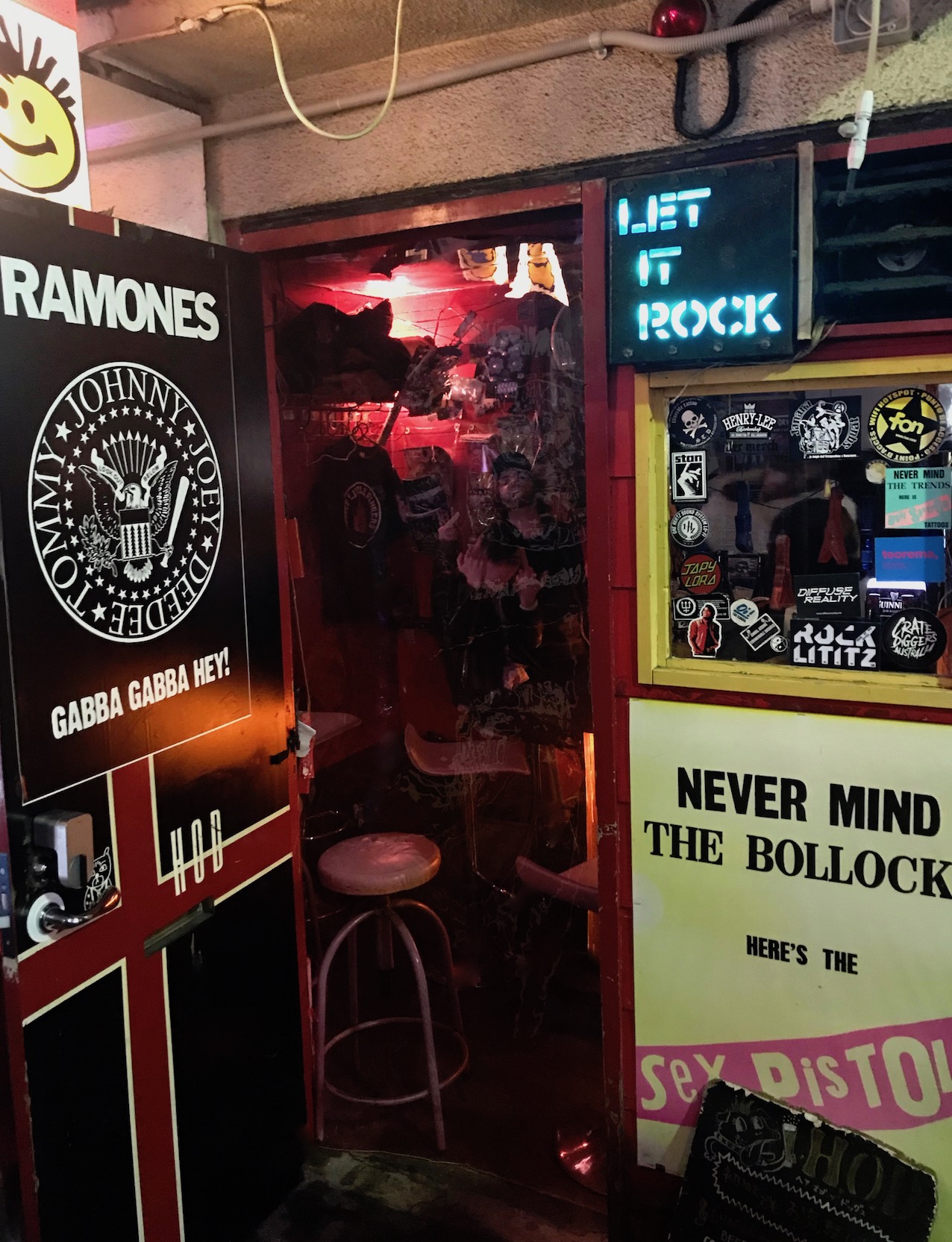 February 2019. There are lots of music pubs too, like Hair of the Dogs Punk Bar which channels classic 70s and 80s punk music. Fittingly, a dude inside was actually giving me the finger as I took my photo. I suitably flipped him the bird back, to which he gave me a reverent nod. Peace. 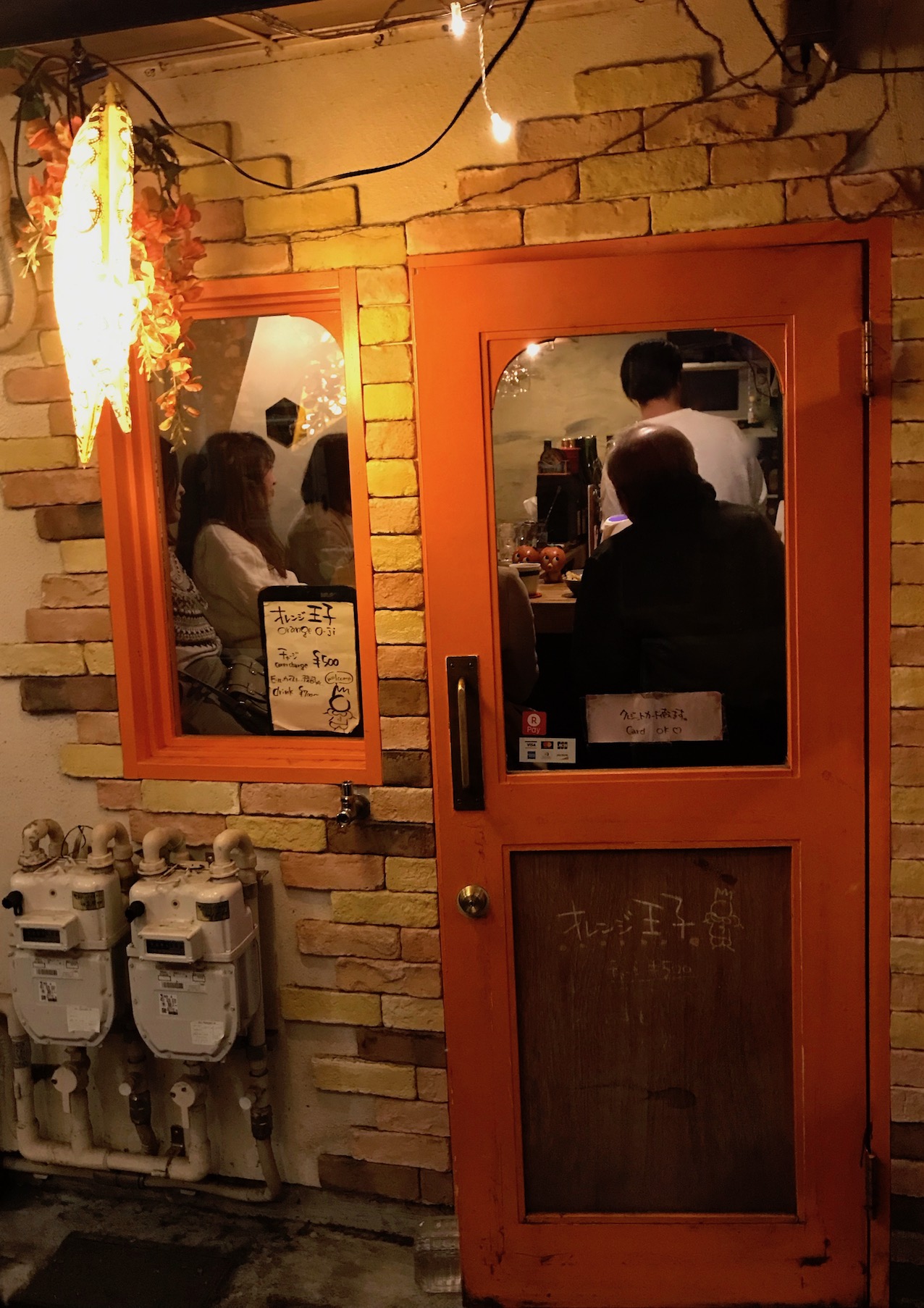 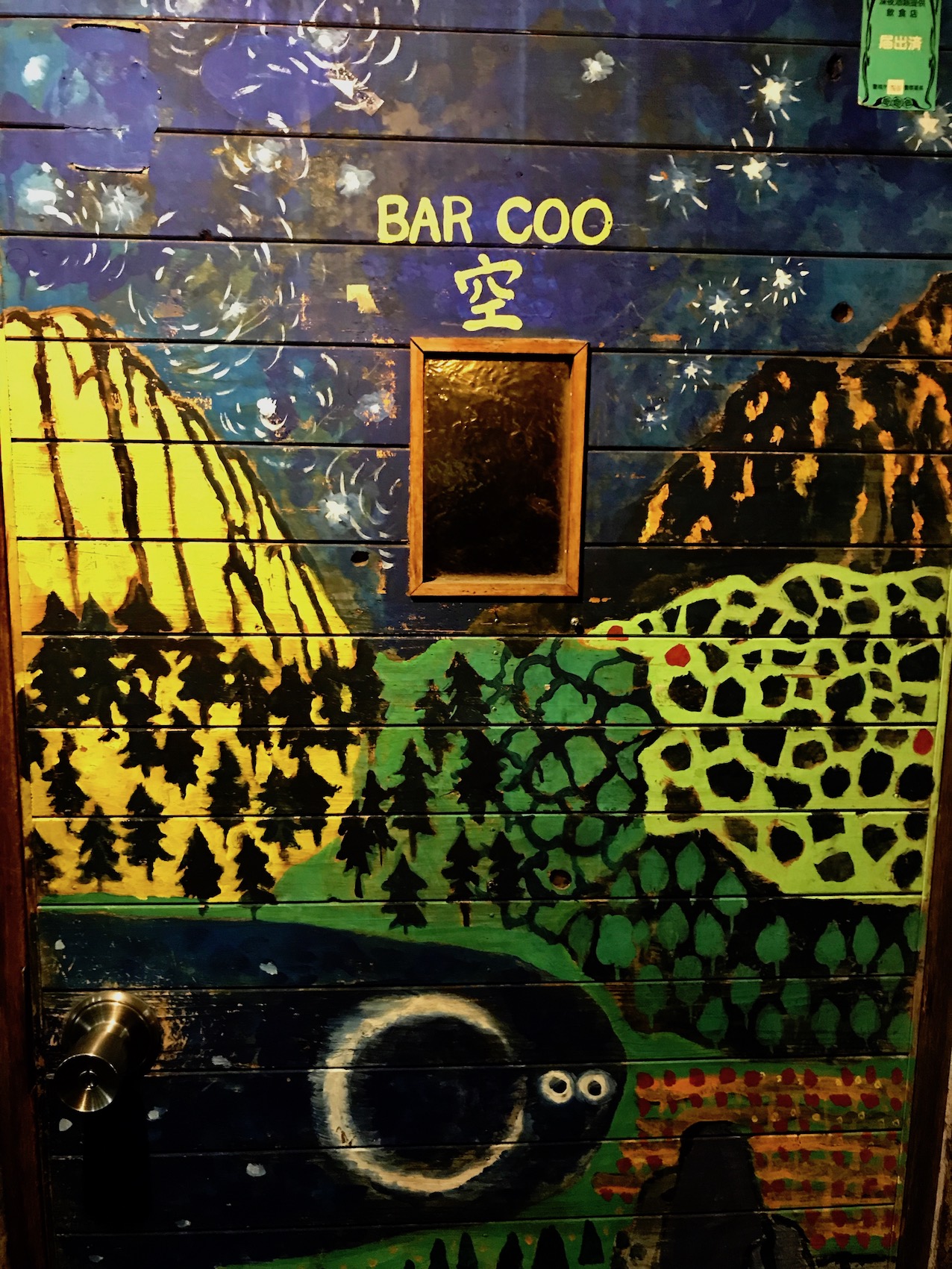 February 2019. Many of Golden Gai’s bars are no bigger than a matchbox and can manage barely half a dozen customers. On the night of our visit this was the case with the very cute Orange Oji Bar, as well as Bar Coo, which has great online reviews for its friendly Japanese owner and complimentary bar snacks. 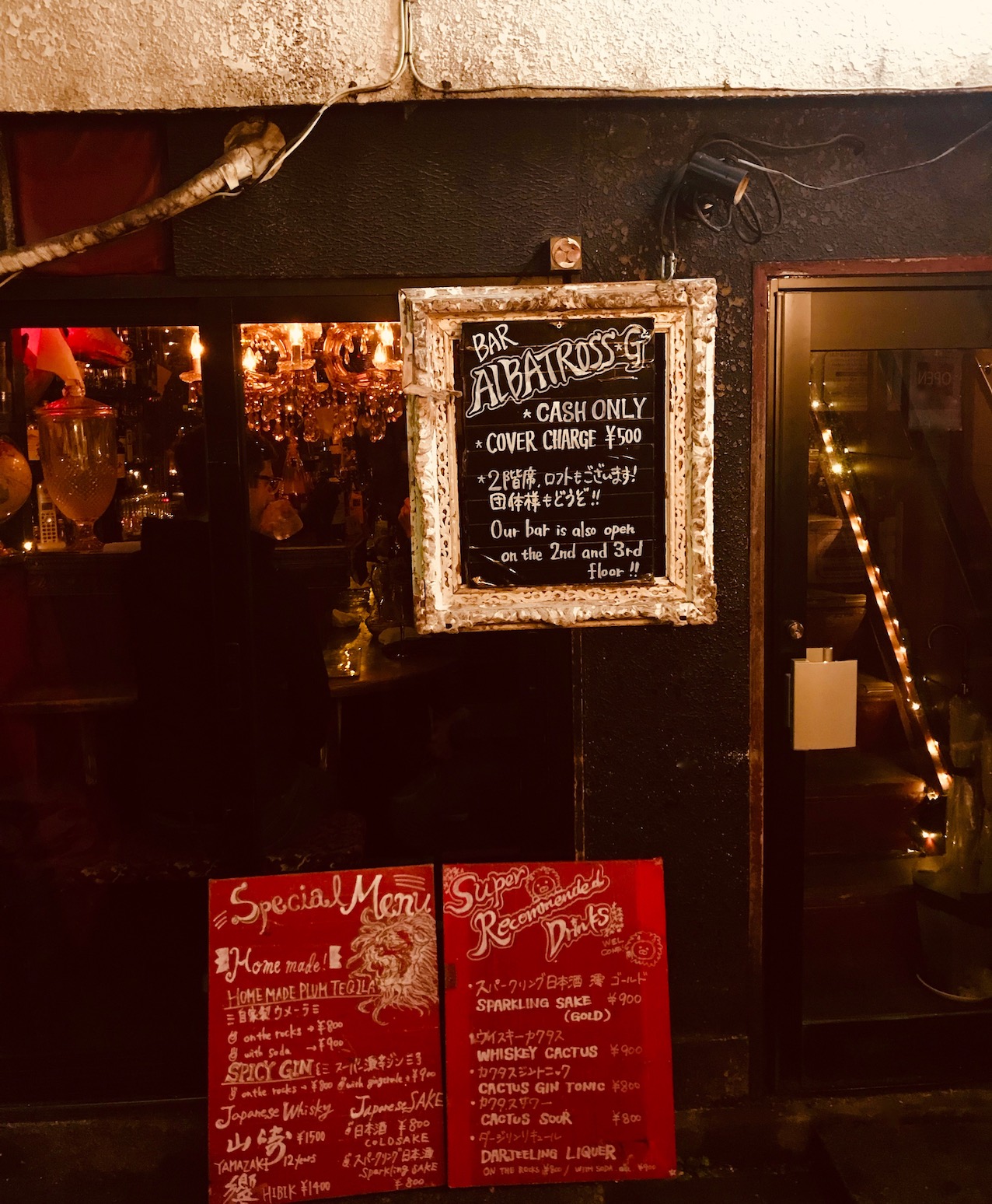 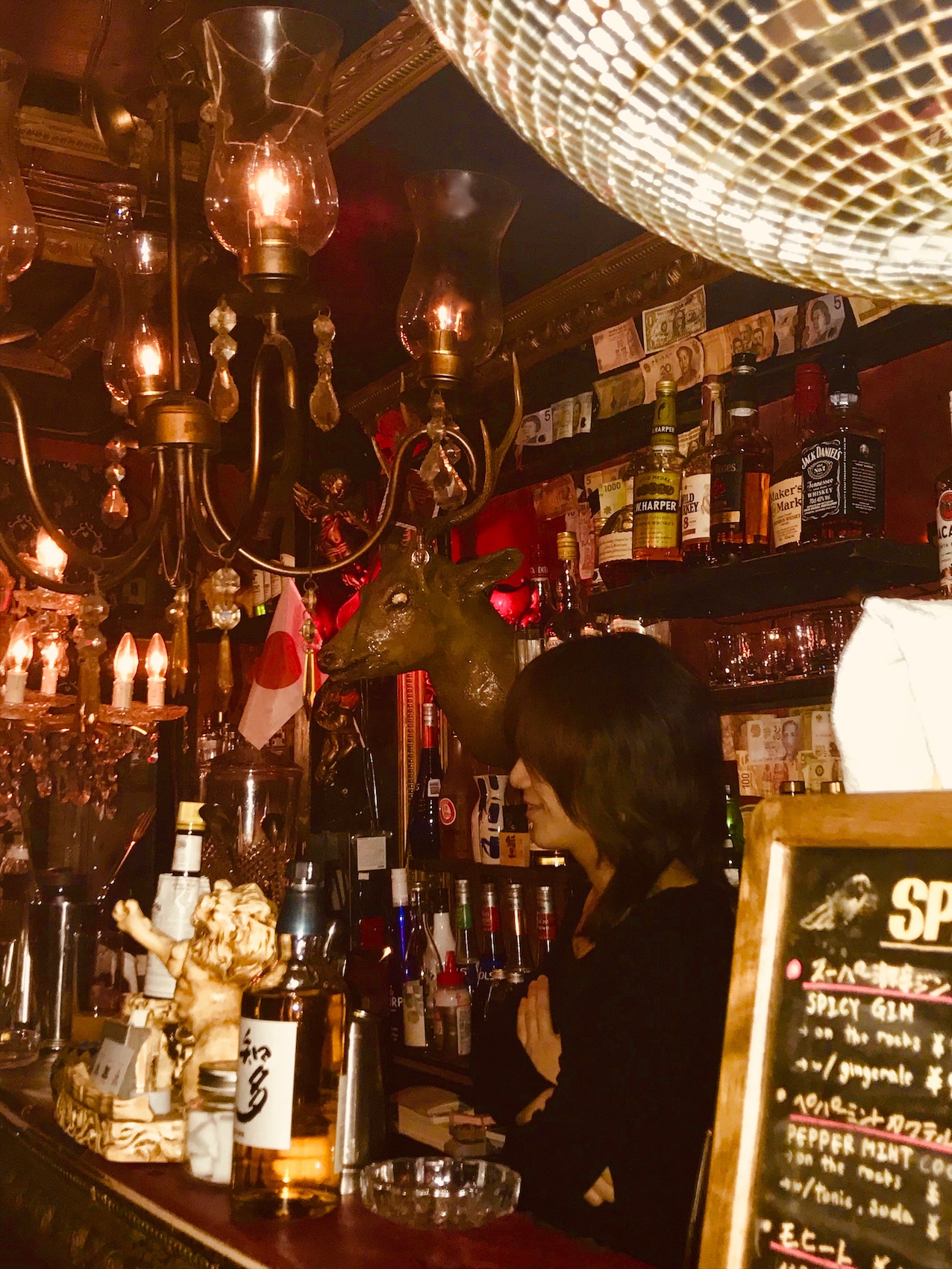 February 2019. In the end Wonderboy and I settled down at Albatross, an intensely rickety three-story bar that is so damn narrow there’s hardly room to swing an underfed kitten. Nevertheless we budged our way down the ground floor bar past the wobbly chandeliers and the giant wall-mounted deer’s head to a corner spot with a good overview of proceedings. 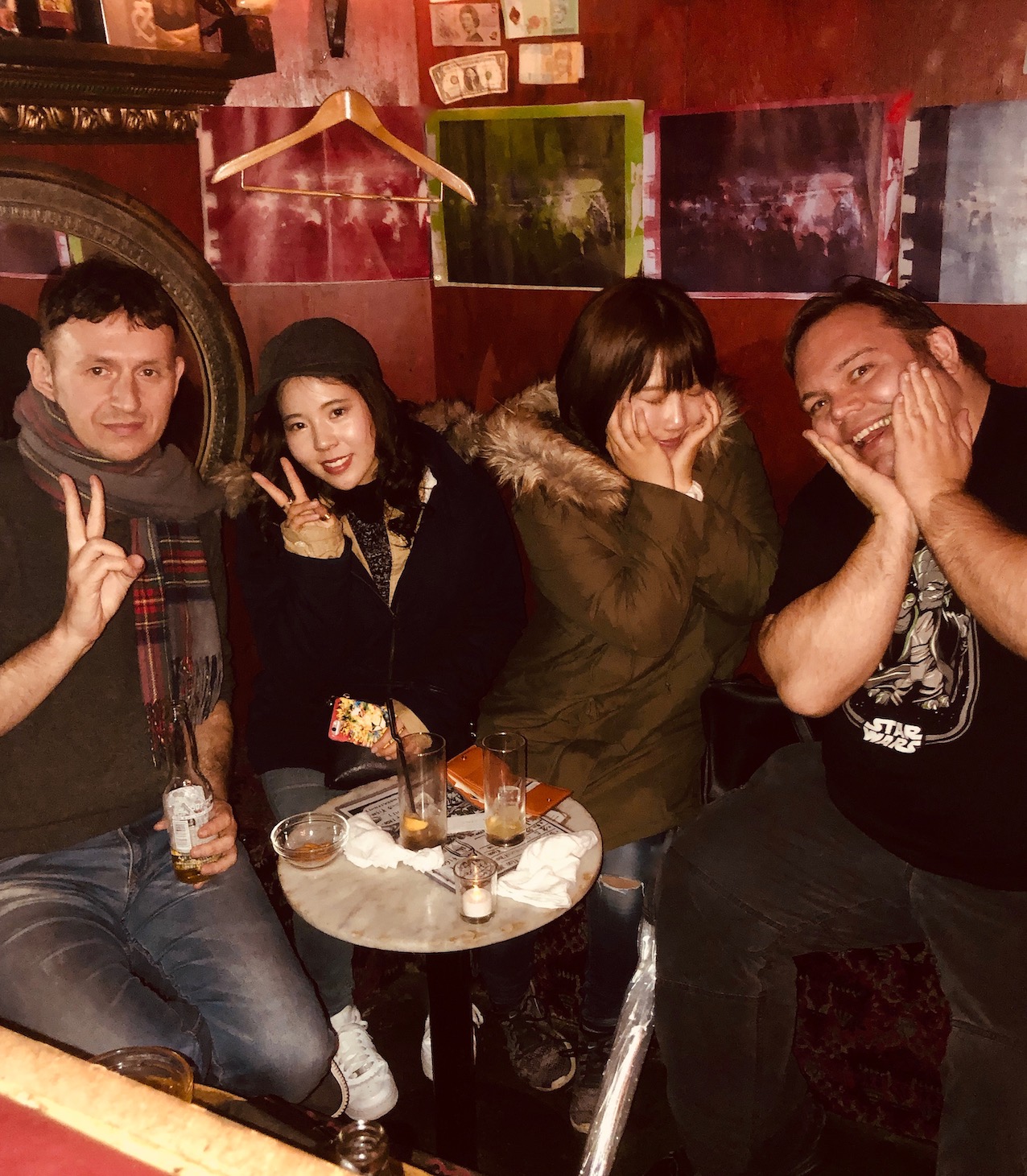 We had a great couple of hours in Albatross, thanks to a mix of good music, the friendly barman and a pair of cute Korean girls keen to practice their (very) limited English. One of the girls was going to study nursing in New Zealand, so we taught her a few phrases, while for the inevitable group photo that followed they schooled us in some key Japanese poses. Ah, Asia. 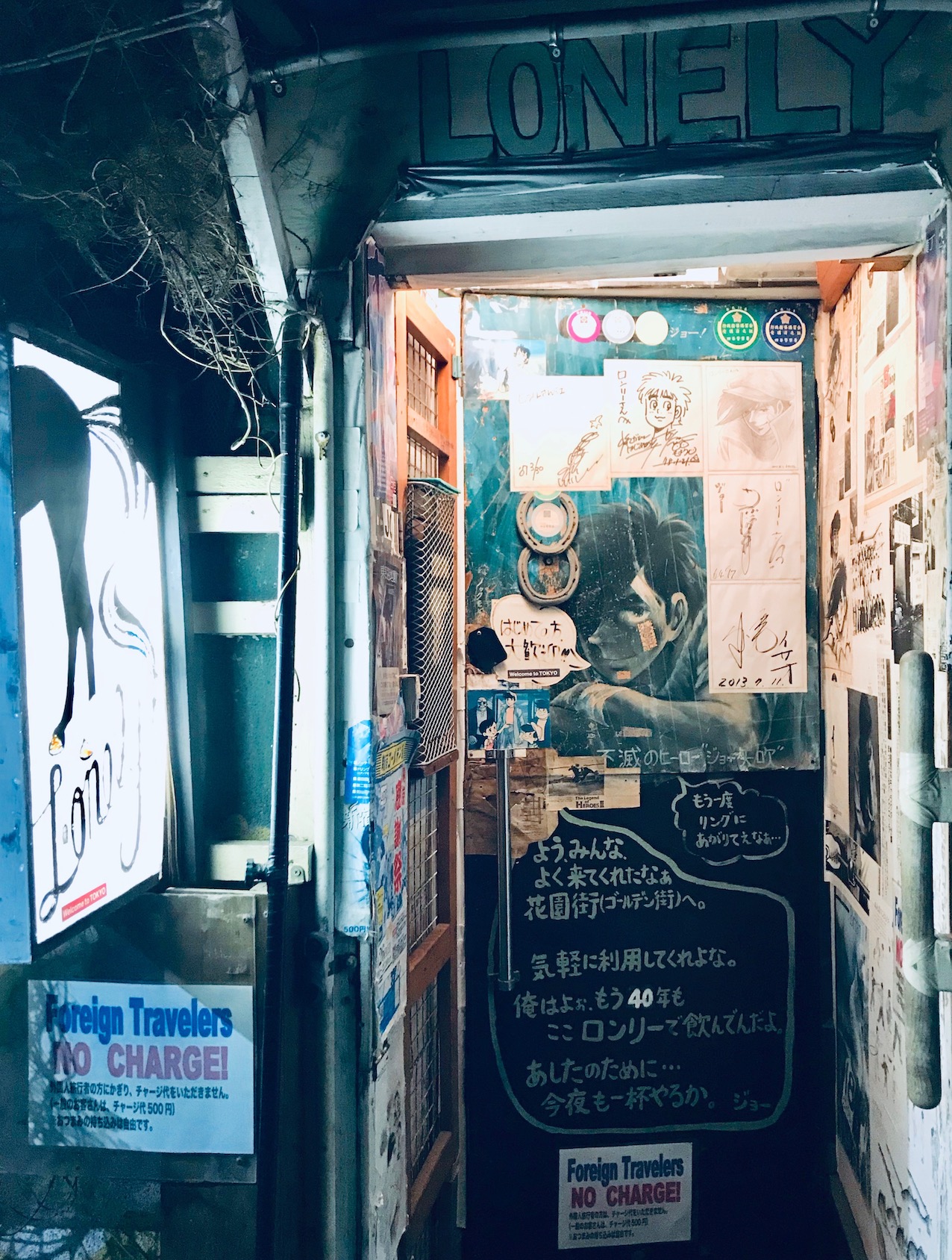 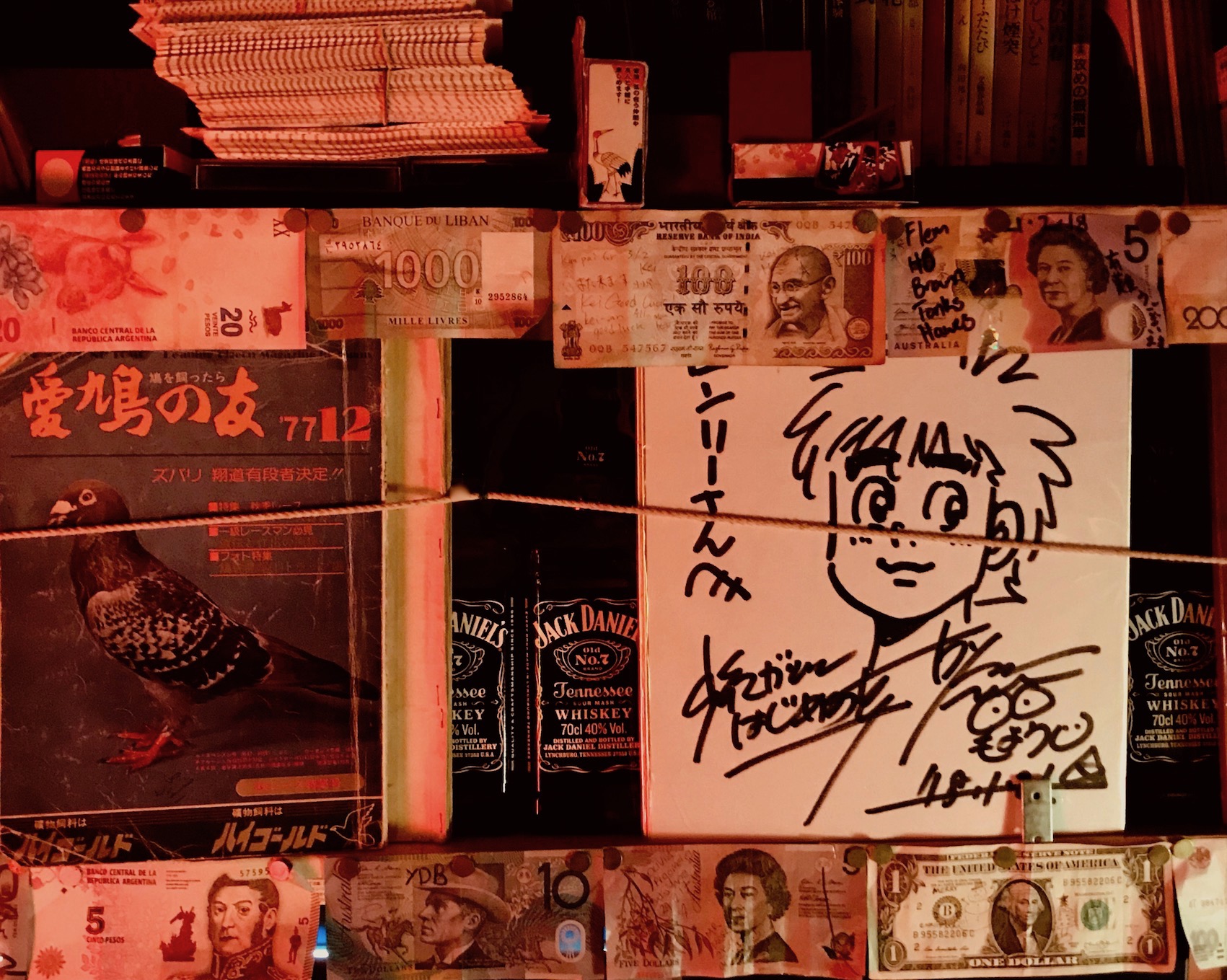 February 2019. If we thought Albatross was claustrophobic (and we did) then Golden Gai’s Lonely Bar takes things to a whole new level! On arrival we were squeezed in opposite a group of British students who were already half pissed and well on the way to getting lairy. Which was a pity, as we really liked Lonely Bar and its wallpaper of anime scribblings, racing horse posters and boxing memorabilia, which included framed photographs and signed gloves hanging from the ceiling.

Lonely Bar is run by a little old man who carefully rearranges the entire seating order so that new arrivals can be shoehorned in. This gets pretty tiresome after a while, especially as all we wanted to do was chill out and be left alone. All part of the charm I suppose, until that is he picks up your backpack without you knowing and moves it out of sight onto the stairs leading to the top floor. There was a literally a moment of pure panic when I realized it was missing, as I dealt with images of my Mac, camera and passport having disappeared into the Tokyo night. Still, it was nothing The Animals’ House of The Rising Sun couldn’t solve. Deep breath, ah.

I thoroughly recommend a night out at Tokyo’s Golden Gai Bar District. Just jump on the subway (Chuo Line) and get off at Shinjuku Station’s East Exit. It’s about an 8-minute walk from there.