April 2019. Wonderboy and I were strolling around Daegu’s historic district when we found ourselves instinctively gazing up at the soaring twin spires of the city’s First Presbyterian Church. It’s literally impossible to miss, perched as it is atop Cheongna Hill and accessed via the dramatic stone steps of Independence Movement Road. 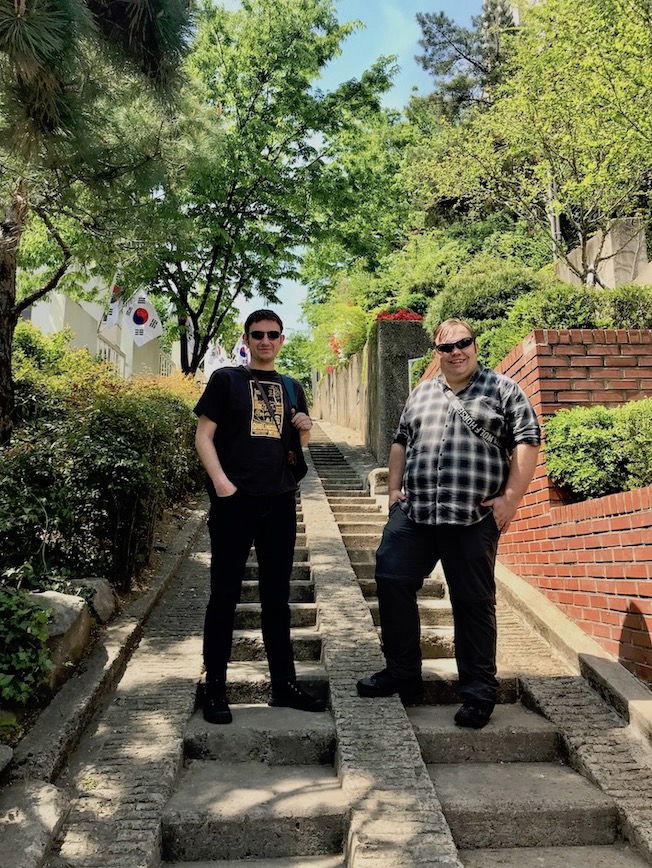 So up we went, cutting through an absolutely gorgeous garden path, framed by drooping branches, manicured hedges and full- bloom flowers.

April 2019. In what was fast becoming a recurring theme in Daegu we found little online info about the First Presbyterian Church. All we could really discover is that it was built by missionaries in 1897 at a time when Christianity was starting to take root in the region. But this lack of context didn’t matter much to us, it was simply enough to sit down on the stone bench outside and peer up at its impressive granite, gothic-style exterior. The giant stained glass window depicts Jesus and some questionable looking lambs.

April 2019. It was silent and empty inside the hallway at Daegu’s First Presbyterian Church. Snooping around, we found some hugely impressive artwork, including a creepy, zombie-green depiction of the crucifixion and a giant close-up of Jesus’ face on canvas, shades of his thorny crown etched across the top.

April 2019. The large wooden doors to the church itself were shut, which initially led us to believe the place was closed. With nobody around to enlighten us, we simply tried our luck and lo and behold they swung open and in we were able to walk inside.

Much to our surprise what we found seemed to be more of a concert venue than an operational church. Sure, there were rows and rows of wooden pews but everything else seemed to be geared towards live performance, from the giant TV screen facing the stage to the microphone stands, speakers and grand black piano.

April 2019. In the end it was the sound of distant voices in the back office that made us scurry off, especially as it wasn’t clear whether or not we were intruding. The First Presbyterian Church of Daegu is located on Gukchaebosang-ro 102-gil right in the heart of Daegu’s historical district. Usually I list opening hours, but in all honesty I’ve been unable to find out any solid info. In any case it’s well worth a five-minute detour, if only to come up and see its towering facade up close.