Want to get the full picture? Before reading this why not start with my travel report on: Kim Kwang-seok Memorial Street.

April 2019. We must have spent a solid hour in Kim Kwang-seok Memorial Street admiring the artwork, listening to the buskers and drinking coffee atop one of the rooftop cafes. The atmosphere had been so positive, a genuine celebration of the man’s life and music. Now, after the enthusiastic recommendations of the yellow-jacketed volunteer who’d welcomed us on arrival, it was time to dig a little deeper with a visit to the Kim Kwang-seok Story House, a museum about the life and times of Korea’s most cherished singer-songwriter.

April 2019. As with the street itself, there’s no charge to enter Kim Kwang-seok Story House. Just head right in and say hello to the friendly receptionist, who may want to take your photo and ask you to sign the guestbook. Among the many ground floor exhibits stands a recreation of the living room in the family home Kim shared with his wife Seoh Hai-soon and their baby daughter Kim Seo Yon.

April 2019. Kim’s marriage was a famously troubled one, but he sought solace through his love for his daughter, whom he adored. You can see a bunch of her personal items in the Story House, such as necklaces, letters written to a pen pal and treasured gifts from her father. All fairly harmless stuff if you’re unfamiliar with the Kim Kwang-seok story, but they take on a much darker slant if you read up on the singer’s troubled life. Kim Seo Yon, who had a history of mental and physical illness, died in 2007 at the tender age of 17 a decade on from her father’s apparent suicide. 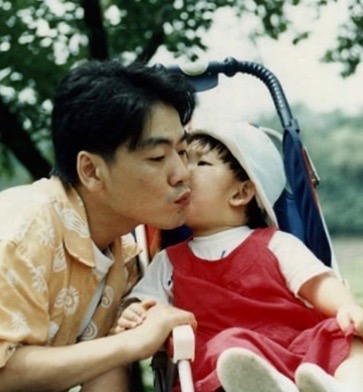 The fact that her mysterious death (acute pneumonia) wasn’t revealed by her mother until ten years later in 2017 works its way into the centre of a highly controversial documentary, Suicide Made, by the Korean filmmaker Lee Sangho. It’s a highly distasteful affair that includes accusations of infidelity, a battle to inherit song royalties and, most shocking of all, the claim that Kim Kwang-Seok didn’t commit suicide but was murdered. Naturally the museum itself doesn’t cover any of this.

On the first floor you can simply walk up to one of the audio stations and listen to some of Kim Kwang-seok’s most celebrated music. Each station plays a different album and the sound is crystal clear through the provided headphones.

Elsewhere there are gold discs, archive photographs, handwritten lyrics and plenty of stories behind the music, though sadly for foreign visitors like me there isn’t much in the way of English.

Back down by the entrance you can have a look through the museum shop, where there are some absolutely gorgeous anniversary edition albums on vinyl, along with the usual postcards, key rings, fridge magnets and other Kim Kwang-seok themed bits and bobs.

Kim Kwang-seok Story House is located at one end of Kim Kwang-seok Memorial Street and is open daily (except Sundays) from  10:00-17:00.