April 2019. The whole point of flying out to the Korean city of Daegu was to see my old mate Wonderboy. Having embarked on extended travels together throughout Cambodia, China, Japan and Spain, I was chomping at the bit to be adding South Korea to our explored list. As an added bonus, it was also great to save some money on hotel costs and crash at his studio pad where he works at Daegu Gyeongbuk English Village.

April 2019. Located out in the countryside of Gyeongsangbuk-do Province, just a half hour drive from the city itself, Daegu Gyeongbuk English Village (DGEV) is spread out across an immaculately landscaped garden complex framed by temperate hills and light woodland. Wonderboy’s little studio flat sits right in the heart of the site with a balcony that overlooks the prettiest section of the main garden. This is where I’d sit some mornings drinking coffee, writing and gazing out over the pond, manicured hedges and cherry blossom trees. Yes, that is a full-size replica airplane! More on that later. 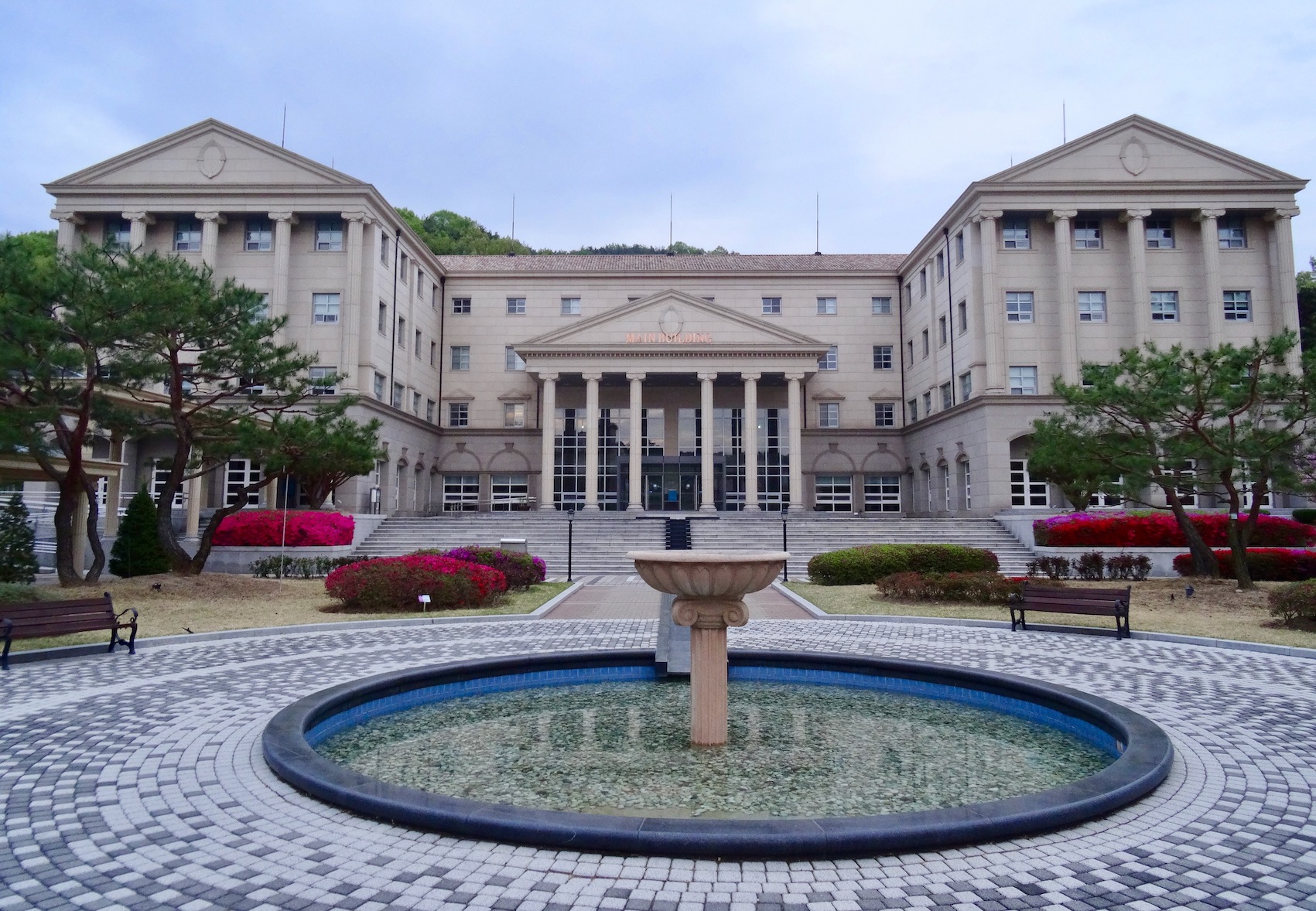 April, 2019. Daegu Gyeongbuk English Village offers extra curricular language training to students of all ages through a partnership with The University of Wisconsin-River Falls (USA) and Daegu’s own Yeungjin University. Wonderboy mostly deals with kids and teens, though every now and then an adult group will roll in to take a UK culture class. This could involve anything from What British People Say & What British People Mean and How To Write a Formal Business Email to the importance of tea in English culture and, crucially, how to actually make one! Some of these lessons take place here in The Main Building (that’s really what it’s called) pictured above. 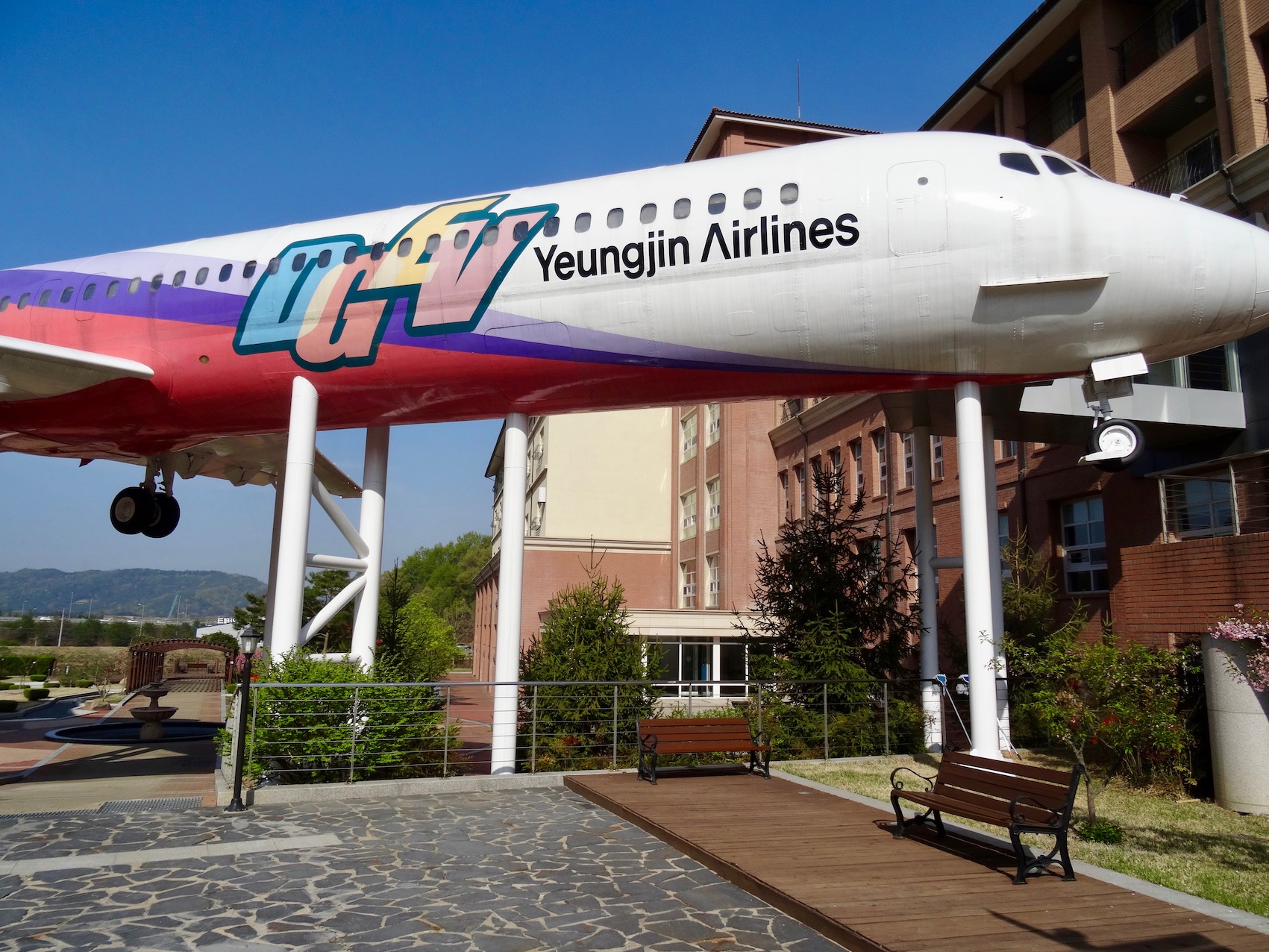 April, 2019. According to the official blurb on their website, Daegu Gyeongbuk English Village gives their students an “experiential learning environment”. They’re not kidding on this one, as the school boasts a wide variety of hugely creative themed classrooms in what’s known as The Situational Building. That giant airplane that dominates the main garden is actually a classroom for students to get to grips with airport-related English language, including checking in and going through security and customs. They even get little Daegu Gyeongbuk English Village passports! The classroom has also been used as training venue for cabin crew.

April 2019. There are loads of these amazing classrooms at Daegu Gyeongbuk English Village and it was fun to get  the full tour through Wonderboy. Students can immerse themselves in the world of making food orders in the classroom known simply as Fast Food (yeah, it’s a Subway mock up), while there’s animal themed vocabulary to stock up on in the cute and cuddly Zoo where Wonderboy admits that yes, it can be challenging keeping kids focused when they’re surrounded by piles of soft toys.

April, 2019. At the Pikes Peak Hotel you can learn how to check in, check out, make complaints and throw in a general enquiry or two, while at my favorite classroom, simply called Broadcast, I couldn’t resist but jump behind the VBC Studio desk to play the the role of news anchor.

I found myself really impressed by the creativity that went into these rooms and Wonderboy admitted it was a lot of fun doing the classes. A friend of mine, stuck in a somewhat meh Korean language school, couldn’t help but surmise: “F***, they get their own TV studio and I’m still fighting for crayons”.

For more info on Daegu Gyeongbuk English Village, check out their website here.

For my guide on what to see and do in this hugely underrated city, check out my travel reports from Daegu.