April 2019. Wherever you may be coming from, getting to South Korea’s Maisan Mountain is not a straightforward affair, especially if you’re trying to do it as a day trip. Setting off from the city of Jeonju with my brother Cory and his fiancée Kaley, the first leg of our adventure involved a 25-minute walk to the intercity bus terminal where we caught a one-hour service to the sleepy town of Jinan. The journey took us deep into the mostly unspoiled countryside of Jeollabuk-do Province, providing some great views from the window. After a bit of confusion we ended up jumping off the bus a few stops before Jinan and then walking up to Maisan Provincial Park, the gateway to Maisan Mountain.

April 2019. It was a solid forty-minute walk from wherever the hell we’d gotten off and at times the going was steep, though we were at least rewarded with ever-improving views of Maisan as we edged closer and closer. Finally we came upon a giant parking lot, a tourist information centre and a pig-themed village where I bypassed all the pork restaurants in favour of some much-needed caffeine.

April 2019. The resulting latte really hit the spot and the woman was super friendly, babbling away in Korean and not at all put off by the fact that we clearly didn’t understand what she was saying.

April 2019. From the village it was another fifteen minutes on foot to the entrance of Maisan Mountain through some lovely landscaped gardens.

We also saw plenty of signs for the park’s other attractions, including Jinan History Museum and… bizarrely… Jinan Scissors Museum. Cory begged and begged us to scrap our mountain plan for a dose of scissors-related education, but we had to be firm with him. He’s still trying to come to terms with it. 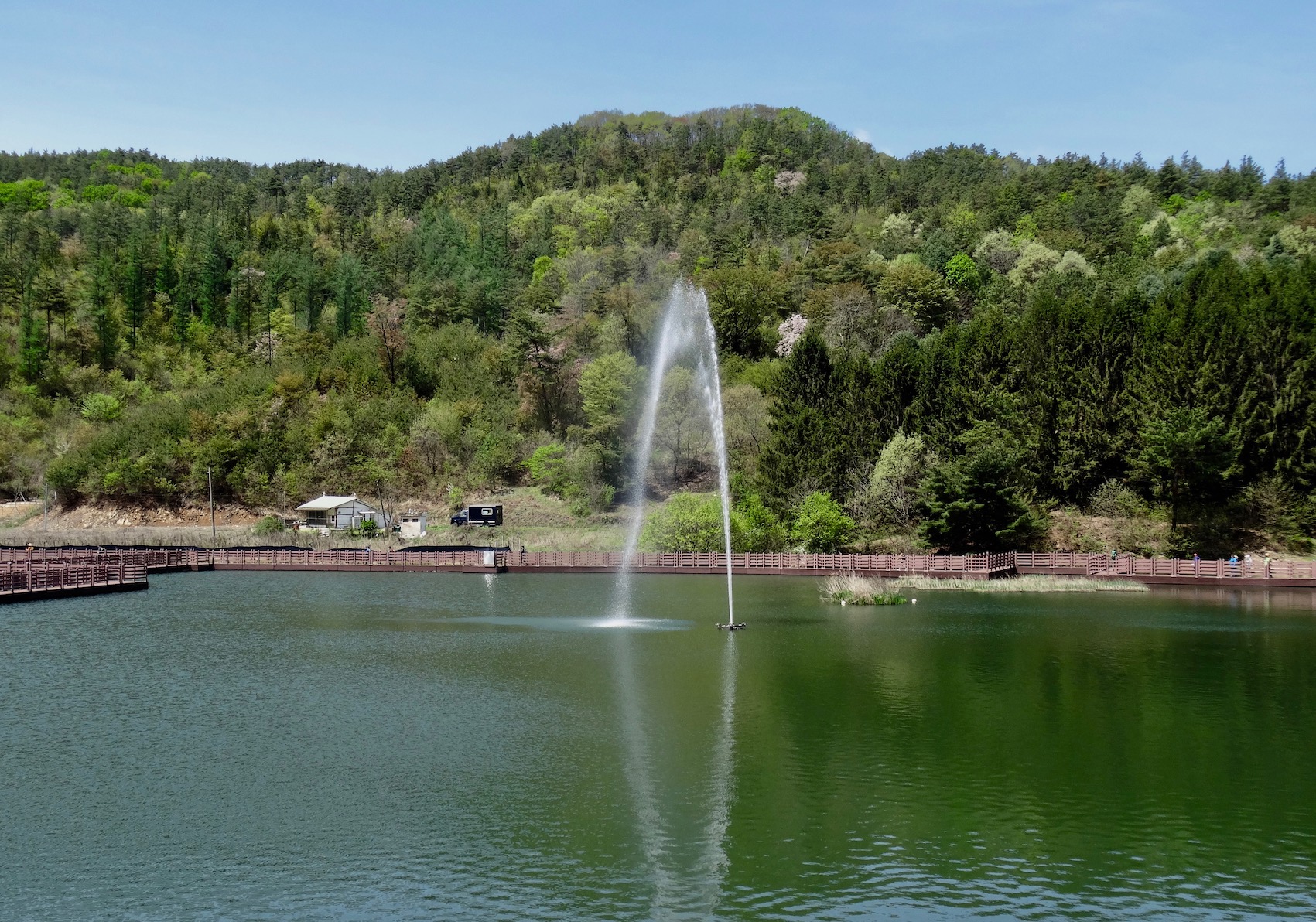 Along the way we crossed the wooden bridge overlooking a giant reservoir. The mountain’s two peaks felt really close now and for the first time I could see the horse ear resemblance that gave the mountain its nickname. In fact, “Mai” means ear in Korean while “San” (yes you’ve guessed it) translates as mountain.

April 2019. The trail up Maisan Mountain comprises of several gravelly inclines and a couple of monster wooden staircases. One of these is a 600-step ordeal called The Saddle. This staircase had us regularly pausing to catch our breath, look back at how far we’d progressed and then gaze upwards at the onslaught that awaited. The colors were gorgeous that day and the vibe was peaceful, thanks in no small part to a drumming monk, whose consistent beats echoed through the treetops, encouraging us on our quest.

At the top of The Saddle there’s another almighty staircase to negotiate, though at least this time it’s downhill. Foot traffic got a little busier here, with groups of Korean hikers streaming past us with their walking sticks and North Face jackets. “Hello!” “How are you?!” etc. 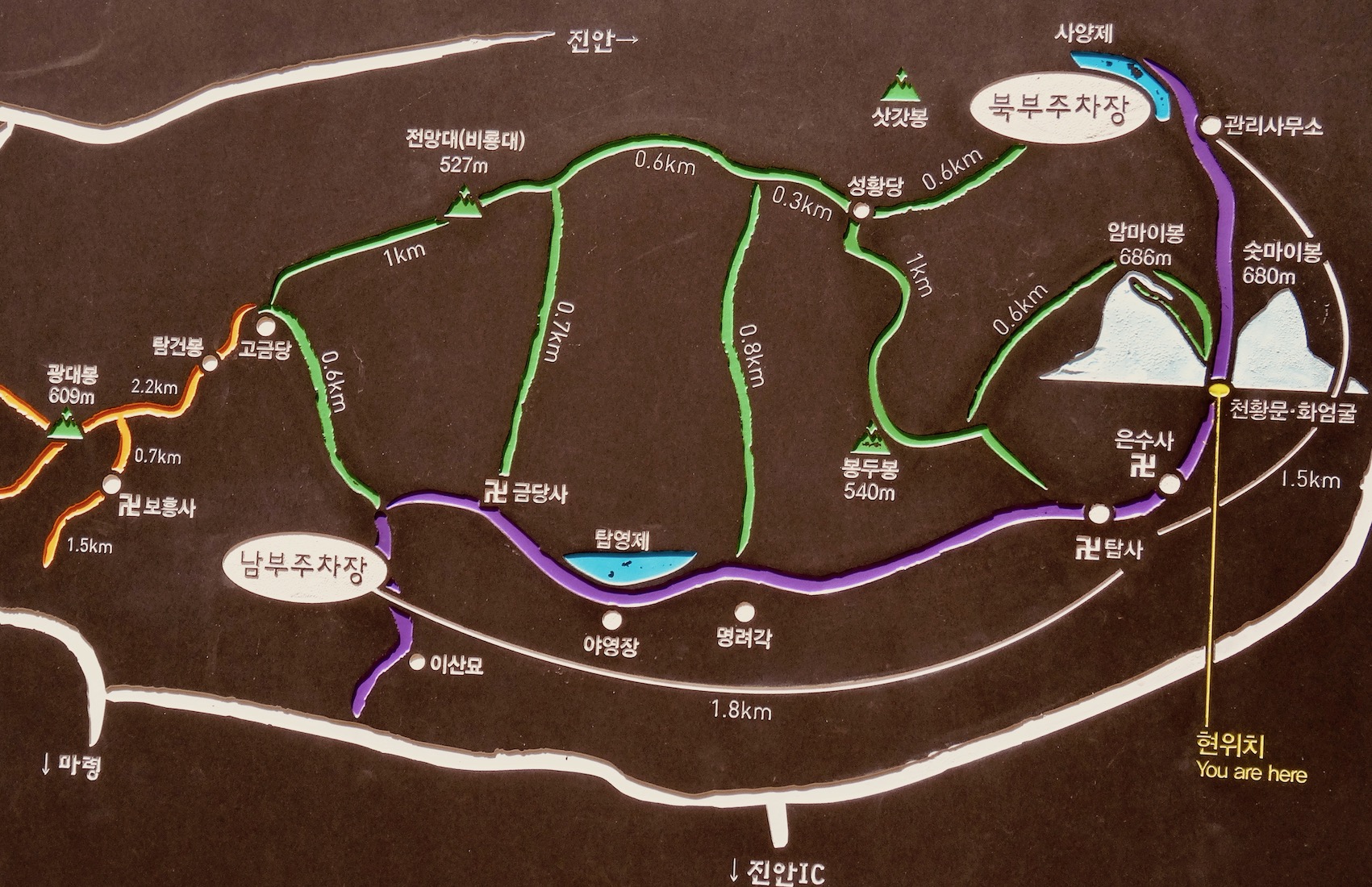 April 2019. And then we arrived at a large crossroads platform where a variety of hiking trails branched off in several directions.

For us it was straight down again with a further staircase to Eunsusa Temple, an ancient buddhist structure located at the foot of one of the horse ears. It had already been quite the day, but actually everything we’d experienced so far had been a mere prelude to the main reason we’d come all this way…

To find out about the next part of our adventure, don’t miss my travel report from Tapsa Temple.