May 2019. It was the first of May when The Fairy and I arrived at Abbey Road in London to gaze out at the world’s most famous zebra crossing. The Beatles were/are not exactly big news in nowheresville China, so it was tricky for me to truly get across what a special place this is and why so many people come here to do the Abbey road thang.

The Beatles crossing Abbey Road, the 8th of August, 1969.

Nevertheless, I patiently explained the nuts and bolts of Abbey Road to The Fairy before taking a private moment to marvel that we were now standing on the exact spot John, Paul, George and Ringo stood on that historical day as they waited to cross the road and make music history. It was the 8th of August 1969, which meant that in precisely 3 months and seven days it’ll be fifty years since it all went down.

May 2019. Abbey Road’s famous crossing was busy that day, with clusters of excitable tourists dipping in and out between the passing traffic to get their photos. I was surprised by how patient local motorists here are, considering they have to deal with this crap day-in, day-out. Where else in the world do you have to deal with people flinging themselves in front of your car during your daily commute? Naturally I’d been toying with the idea of getting a photo of myself on the crossing frozen in Beatles mode, but it was just too hectic. So The Fairy and I hopped across the other side to take a look at Abbey Road Studios and its famous graffiti wall.

If The Fairy had been a little underwhelmed by the sight of an ordinary looking zebra crossing, I think Abbey Road’s amazing graffiti wall and its sea of heartfelt messages made a bigger impression. For its here that people come to scribble down their greetings, Beatles lyrics and rest in peace tributes for John and George. It’s all rather moving. The Abbey Road Wall even has its own Instagram feed!

Squeezing in my own contribution to The Abbey Road Wall.

My own contribution to The Abbey Road Wall.

I’d been hugely disappointed to read that the local council wipe out the messages every 2-3 months with a fresh coat of white paint! Whyyyy? So in a way it felt a bit pointless making my own contribution. That didn’t stop me of course, a man’s gotta do what a man’s gotta do!

I noticed that not that many people were actually peering through the railings at Abbey Road Studios itself. Maybe it’s the distracting draw of the wall, or perhaps its just easy to dismiss as this mythical off-limits entity. But I made sure to take a moment and just breathe it all in, imagining the fab four trotting up those steps to lay down such wondrous tracks as Come Together… Something… You Never Give Me Your Money.

Nip into the alleyway running along the side of Abbey Road Studios for an amazing timeline that puts the studio’s historical importance into staggering perspective. Outside of all the Beatles stuff, this is also where Edward Elgar conducted the trio of his Pomp and Circumstance March no.1. This is where Pink Floyd laid down Piper at The Gates of Dawn, where Radiohead recorded The Bends and where Oasis made their final studio album Dig Out Your Soul.

But while you can’t get into Abbey Road Studios, absolutely everyone (and their wallets) are welcome to mooch around the Abbey Road Shop. Man, back before I sold off my music empire and committed myself to a life of digital nomadcy I’d have gone crazy in this place! As it was, I felt more than content just strolling around admiring the very cool Abbey Road/Beatles products on offer with their very uncool price tags.

It was in the Abbey Road Shop that I first spied Erik, an American musician and all-round Beatles nut from L.A. I admit it was fun just watching him bounce around the place in awe of his surroundings. Outside we got chatting and he told me how he’d always dreamed of coming here and how influential The Beatles had been on his life in general, not to mention his music. So we marked the occasion with a quick selfie, an Erik tradition with the random people he gets chatting to when he’s on the road. 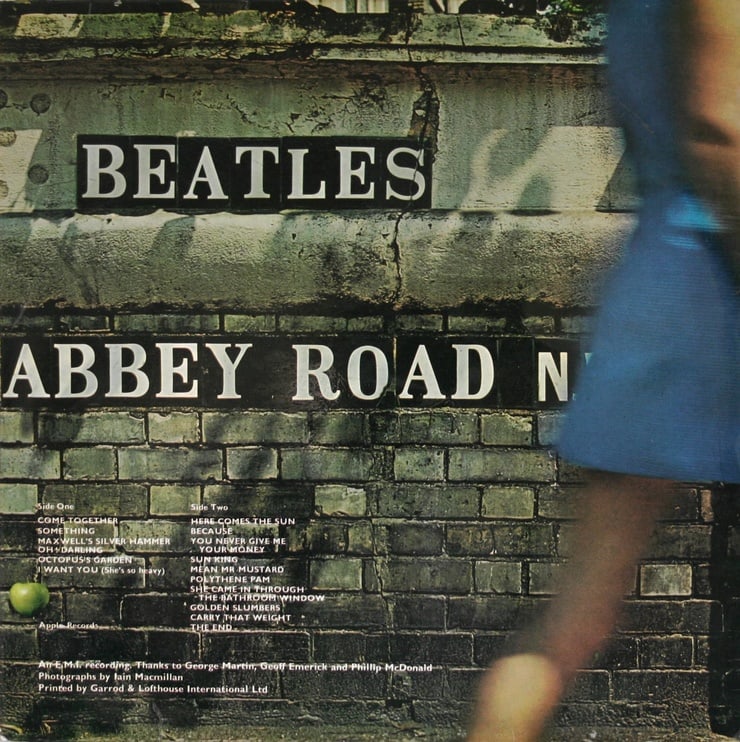 As great a day as it had been, I was still lacking my all-important Abbey Road Crossing photo. Back in 1968 The Beatles had the brilliant Iain Macmillan behind the lens. With all due respect to The Fairy she was no Iain Macmillan and, understandably, felt reticent about getting into the middle of the road for the necessary angle. But fear not, I had an excellent plan B in mind!

A few days later my old friend Baddi came to town and as we headed off for an afternoon in Camden Town, I suggested a detour to Abbey Road. This time the pedestrian foot flow seemed manageable and it didn’t take us long to find someone game enough to take the shot. I was in the process of asking Baddi if he wanted to join me when we were approached by a pair of South American guys, Maximilian from Argentina and Marlon from Brazil. “Why don’t we do as four?” asked Maximilian with a glint in his eye. And so the whole thing fell instantly into place. We lined up, waited for a break in the traffic, enjoyed a couple of failed attempts and then got one that looked half decent. Success! Ok… maybe we could’ve gone to greater efforts in making a more faithful reproduction. But hell those passing cars were fast and I had no desire whatsoever to take my shoes off. All that mattered was that I’d finally got my photo, capping off an unforgettable experience at Abbey Road!

Love The Beatles? Have a read through my review of The White Album.