May 2019. It’s tough to think of a more historical place in all of England than the amazing Westminster Abbey. For this is where kings and queens have been crowned since 1066 and where royal weddings have taken place, including the union of Prince William and Kate Middleton in 2011. A staggering seventeen British monarchs were laid to rest here too, along with some of the greatest minds in British history from scientists, artists and writers to politicians, soldiers and actors. I must have walked past this grand old building a dozen times if not more over the years, although I’d never actually gone inside. Now, with a curious fairy in tow who may or may not ever come back to London, I figured this was the time to see Westminster Abbey in all its glory.

Haven’t pre-booked your tickets? Then join the long queue outside Westminster Abbey.

May 2019. Not booking our Westminster Abbey tickets in advance turned out to be a major boo boo. The long queue that day was hellish and from what I hear pretty typical. Around a million people pass through the abbey’s door every year so there isn’t really much of a lull. If you do have a pre-booked ticket you can duck in a shorter queue and get on with your exploring. If like us you didn’t get organized then expect to wait over an hour just to reach the ticket counter.

May 2019. I cannot overstate just how gorgeous Westminster Abbey is inside. The experts say this is one of the finest examples of Early English Gothic in The UK, though there’s actually a dizzying mix of styles throughout. It’s also worth noting that photographs are not allowed in the interior and there are plenty of eagle-eyed wardens around to enforce this. So I had to be super sneaky in getting the shots you see in this article.

May 2019. I don’t think I’ve ever felt completely overwhelmed by a church before, but at Westminster Abbey there’s literally so much to take in you’ll find the complimentary audio guides essential in making sense of everything. One of the Abbey’s highlights is the Tomb of the Unknown Warrior, located at the western end of The Nave. The soldier interred here fell sometime between 1914-1916 during World War I. His unmarked grave was discovered in France in 1916 by an English priest. The coffin, complete with large chunks of French soil, was subsequently brought over to London in 1920 for a burial ceremony at the abbey on the 11th of November. 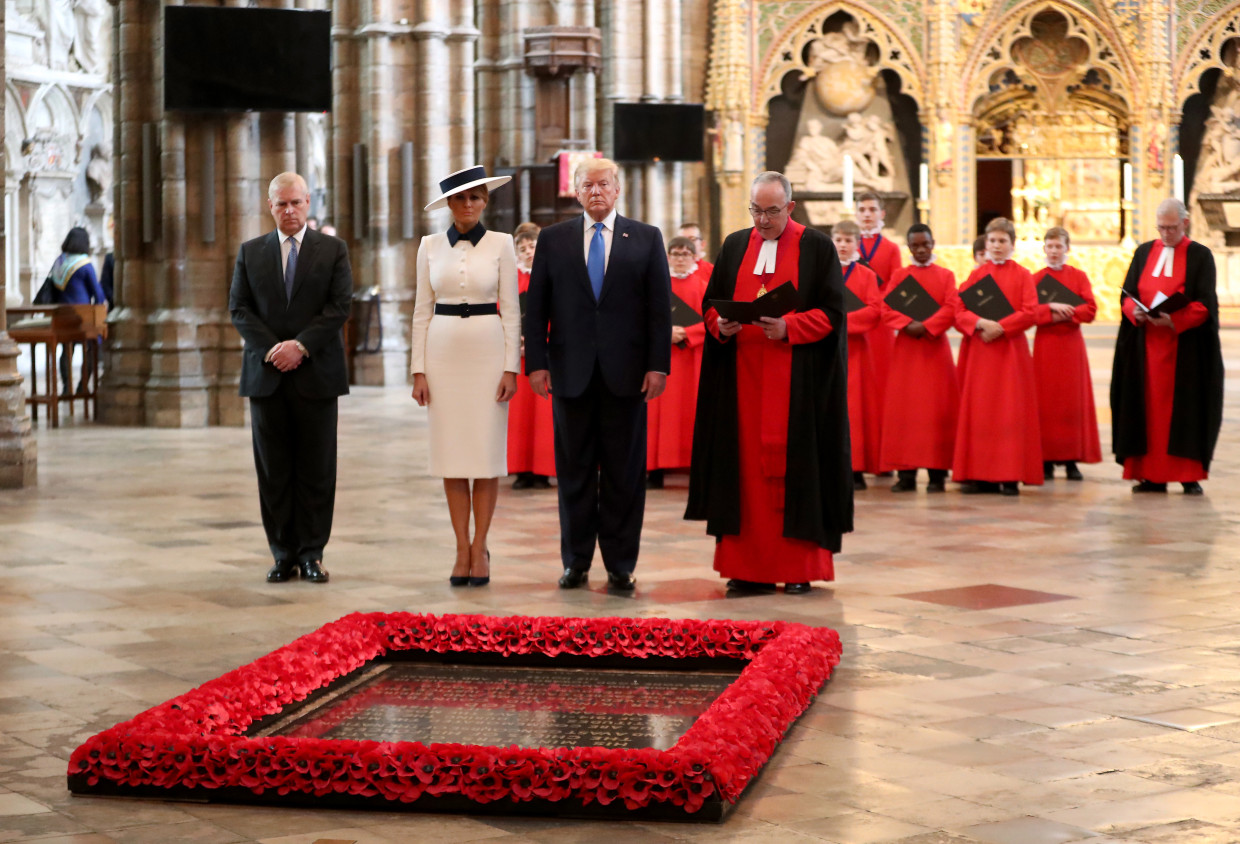 Donald Trump paying his respects at the Tomb of the Unknown Warrior. Westminster Abbey London. Courtesy of Credit: GETTY – CONTRIBUTOR.

And here he’s remained ever since, the ultimate symbol of the sacrifices made for freedom, king and country. Just a few weeks on from my visit, I turned on the TV one day to see images of President Donald Trump and The First Lady paying tribute to The Unknown Warrior as part of their state visit. It was weird to see that Trump was literally standing right on the spot I took my photo!

May 2019. There are a number of notable memorial stones just across from the Tomb of the Unknown Warrior. Among these stands a tribute to James Ramsay MacDonald, Britain’s first Labour Prime Minister, whose funeral took place here in November 1937. Like many of The UK’s most noted politicians MacDonald’s family were offered a burial within Westminster Abbey, though on this occasion they declined and he was laid to rest alongside his wife in Lossiemouth, Scotland.

Light a candle at Westminster Abbey.

Of all the churches, cathedrals, temples and all the rest of it I’ve seen over the last twenty years of travel, I’ve rarely felt moved to light a candle for someone. It’s just never been my style I suppose as an atheist. But there was something about Westminster Abbey that moved me.

Lighting a candle for my grandmother, Westminster Abbey.

Maybe it was the abbey’s weight of history and the oozing sense of patriotism that my fragmented identity had been so in need of after such a long period away. Whatever it was I found myself instinctively lighting a candle for my dearly departed Nanny Tommy, a special moment and one that will always bring me fond memories when I look back and remember my day at Westminster Abbey.

I’ve never been and never will be much of a history buff, but it still felt like quite the privilege to come face to face with so many tombs of Britain’s kings and queens. The above vault belongs to King Henry V, whose reign was famed for his many conquests in France. He was also a major financial contributor to Westminster Abbey, in particular the huge rebuilding project of the nave. In the end all that French fighting became his undoing and he was laid to rest here on November the 7th 1422.

One of the juicer tombs on display, historically speaking, is that of Mary Queen of Scots. Mary already had quite the long and scandalous backstory by 1567 when she was Queen of Scotland and shacked up with third husband James Hepburn, the 4th Earl of Bothwell. But then, following an uprising against the couple and an unsuccessful attempt to regain the throne, Mary fled to England to seek help from her cousin Queen Elizabeth I. Big mistake! Elizabeth hadn’t forgotten that Mary once made claims to her own throne, so she responded by imprisoning her cousin in various castles for eighteen years! Finally in 1586 Mary was found guilty of plotting to assassinate Elizabeth and was beheaded at Fotheringhay Castle. Having been originally buried at Peterborough Cathedral, Mary was eventually moved to Westminster Abbey in 1612 at the order of King James I.

Architecturally there are so may wow moments as you make your way through Westminster Abbey. But perhaps the highlight is the Chapel of Henry VII, also known as Lady Chapel. With its frankly ludicrous fan vaulted ceiling, stained glass windows and bronze effigies, the 16th century historian John Leland once described this place as “the wonder of the world”. Dating back to 1516, Lady Chapel continues to make royal history today as The Queen and The Prince of Wales install new knights here. I’m still waiting for their call.

For a curious little Westminster Abbey sight, don’t miss the small but beautiful RAF (Royal Air Force) Chapel, located at the eastern end of Lady Chapel. It’s dedicated to the men of the Royal Air Force who fell during The Battle of Britain in 1940. It was during this time that the abbey itself was bombed, suffering exterior damage and blown in windows. A small hole in the wall from that time has been cleverly preserved and has a glass cover on the outside.

My favourite part of the Westminster Abbey experience was saved till last with the wonderful Poet’s Corner, which basically serves as a who’s who of British literature.

Featuring novelists, poets, playwrights, screenwriters and the odd composer, this amazing section of the abbey began when Geoffrey Chaucer was buried here in 1400. I have fond memories of my old schoolteacher Mr. Bagley busting a gut trying to get my classmates and I into Chaucer back when I was at college in the mid 1990s. He never stood a chance.

The Fairy and I had been inside Westminster Abbey for nearly an hour and a half by the time we were done. So we finally made for the exit via the cloisters that run around the beautiful Little Cloister Garden.

As we were exiting it was decided that a coffee and a bite was in order, which is the precise moment we stumbled across Cellarium Cafe, Westminster Abbey’s official eatery. You enter right through the cloisters themselves into a chic, atmospheric cellar decorated with wooden benches, tables and intricate ceiling arches. Ten out of ten for the environment then, though we were less impressed by the expensive, dry lemon drizzle cake. The coffee was passable.

Westminster Abbey is a must see for anyone visiting London. I can’t stress enough the advantages of booking ahead to avoid the queues and check whether there’s a partial closure on the day of your visit. You may also find that the abbey is closed altogether for special events. For opening times and ticket prices, take a look at their excellent website.