May 2019. The sun had come out for my first afternoon in Liverpool, which was very kind of it. After our lovely Ferry Cross the Mersey River Cruise, Steppers and I decided to take a late afternoon stroll down the city’s historic waterfront. Packed with award-winning museums, sculptures, art installations, war monuments and restored Victorian warehouses, the area boasts the UK’s largest number of Grade I listed buildings; all of which contributed to Liverpool being crowned European City of Culture back in 2008.

May 2019. If you enter Liverpool Waterfront from Pier Head, the first thing you’ll see are the larger than life Beatles Statues set in front of the Mersey Ferries terminal. Created by the sculptor Andrew Edwards, they were added to the waterfront in December 2015 to mark fifty years since The Fab Four played their last gig in the city. Don’t miss some wonderful little details, such as the cine camera in Paul’s hand (his obsession with filming was a key component of the anthologies project in the 1990s), while Lennon is clasping some acorns, a peace symbol he used to send to world leaders in the 1970s.

May 2019. This is just the beginning of a series of statues and sculptures dotted all along Liverpool Waterfront. Captain Frederic John Walker was a Royal Navy officer famed for his heroic work in the Second World War. Apparently Walker sank more German U-boats than any other commander, which tied in very nicely with our earlier visit to the U-Boat Story Museum where we’d seen the grizzled remains of the fearsome German submarine U-534. Walker’s statue was unveiled in 1998 in a ceremony led by Prince Philip.

May 2019. Walker’s statue is just one of a dozen World War memorials at Pier Head. With all my years spent living in and travelling around China, for me the most curious of these tributes was the plaque dedicated to the Chinese seamen who served Britain in both World Wars. The memorial also serves as an official apology for a huge injustice placed upon some of these men. I hadn’t been aware of this story, but apparently some of these war heroes suffered forced repatriation after the government decided their numbers were too great. In some cases families were even split up, with not so much as an explanation for wives wondering where the hell their husbands had gone!

The love locks on Liverpool Waterfront.

The Liverpool love locks on the waterfront.

May 2019. Making our way from Pier Head towards The Royal Albert Dock, Steppers and I passed Liverpool Waterfront’s railing of love locks. Added by couples as a gesture of their commitment and love, the tradition dates back to World War I when women would come here to leave a lock in the hope that it would protect their men while they were away fighting.

May 2019. You simply cannot miss the sleek Museum of Liverpool, the UK’s largest newly-built National Museum in over 100 years. Opened in 2011 at a cost of £72 million, its striking exterior is a tourist attraction in its own right, let alone the fantastic exhibitions that lie within. I was luck enough to catch the outstanding Double Fantasy – John & Yoko Exhibition.

Have you heard about the Liverpool sculpture SuperLambBanana? It was created by the Japanese artist Taro Chiezo as a half lamb, half banana beast. Apparently this was Chiezo’s statement on the dangers of genetic engineering. Why a half-lamb, half banana? Because back in the day they were both common cargos at Liverpool’s docks. Steppers and I didn’t get to see the original SuperLambBanana, but we did check out a few replicas (there are over one hundred and fifty) floating around the Museum of Liverpool. This SuperLambBanana is in tribute to a bunch of Liverpool rock bands, including Echo & The Bunnymen, Frankie Goes To Hollywood and The Mighty Wah!

Yet another Liverpool Waterfront sculpture is The Carters Working Horse Monument. It’s a tip of the hat to those heroic animals who, for more than two hundred and fifty years, tirelessly carted goods to and from the docks to businesses all over the city. They also played a huge role in keeping the city’s economy going during The Second World War.

I would imagine that most visitors to Liverpool have never even heard of Billy Fury. He wasn’t a Beatle y’know, and yet he equalled their record of 24 hit songs throughout the 1960s. With a bit of an Elvis look and a similarly hip-swivelling stage act, Fury is a much loved son of Liverpool who died back in 1983 after suffering a heart attack. He was just forty two years old. This statue was unveiled in 2003 next to The National Museum of Liverpool Life. 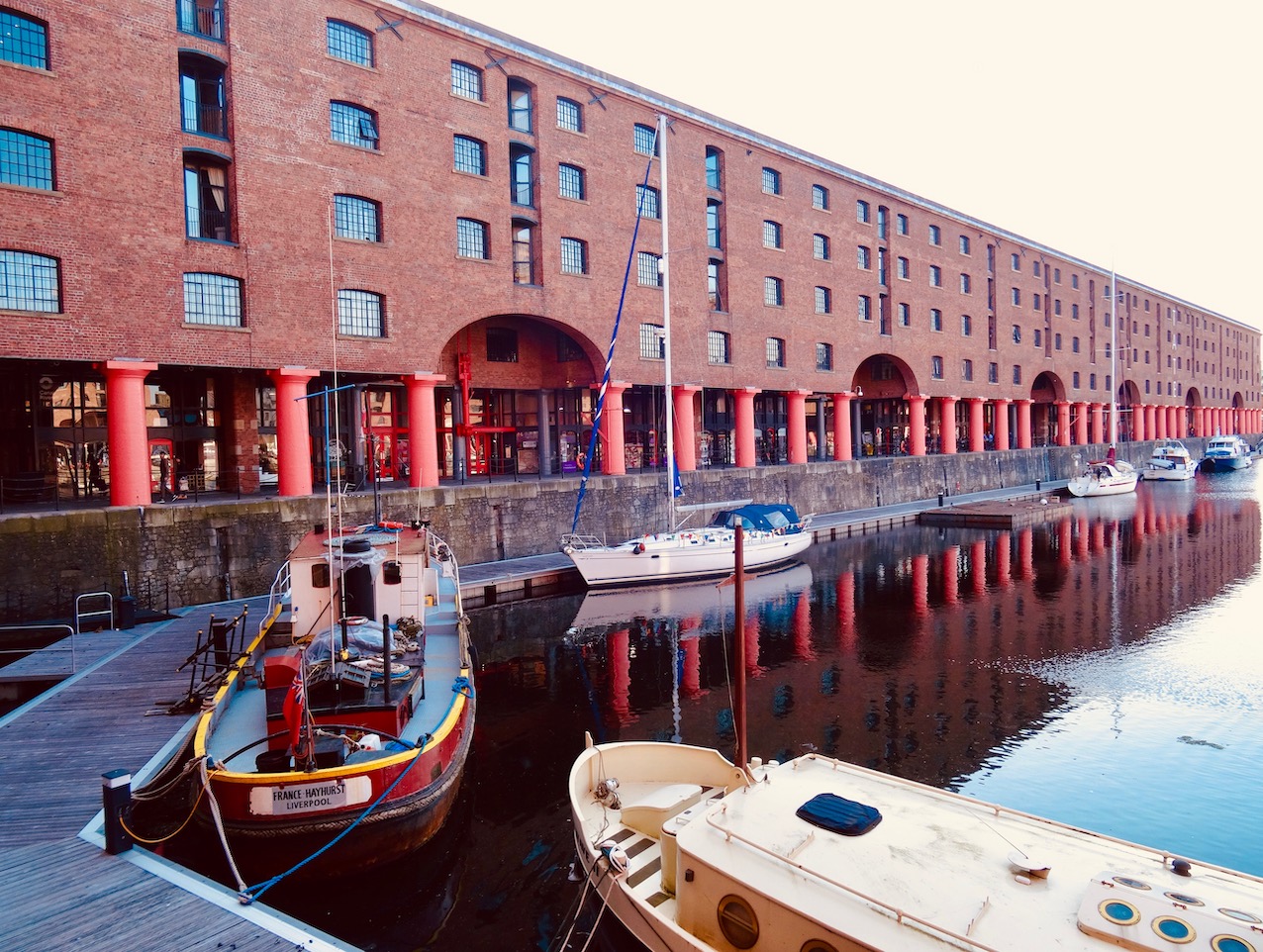 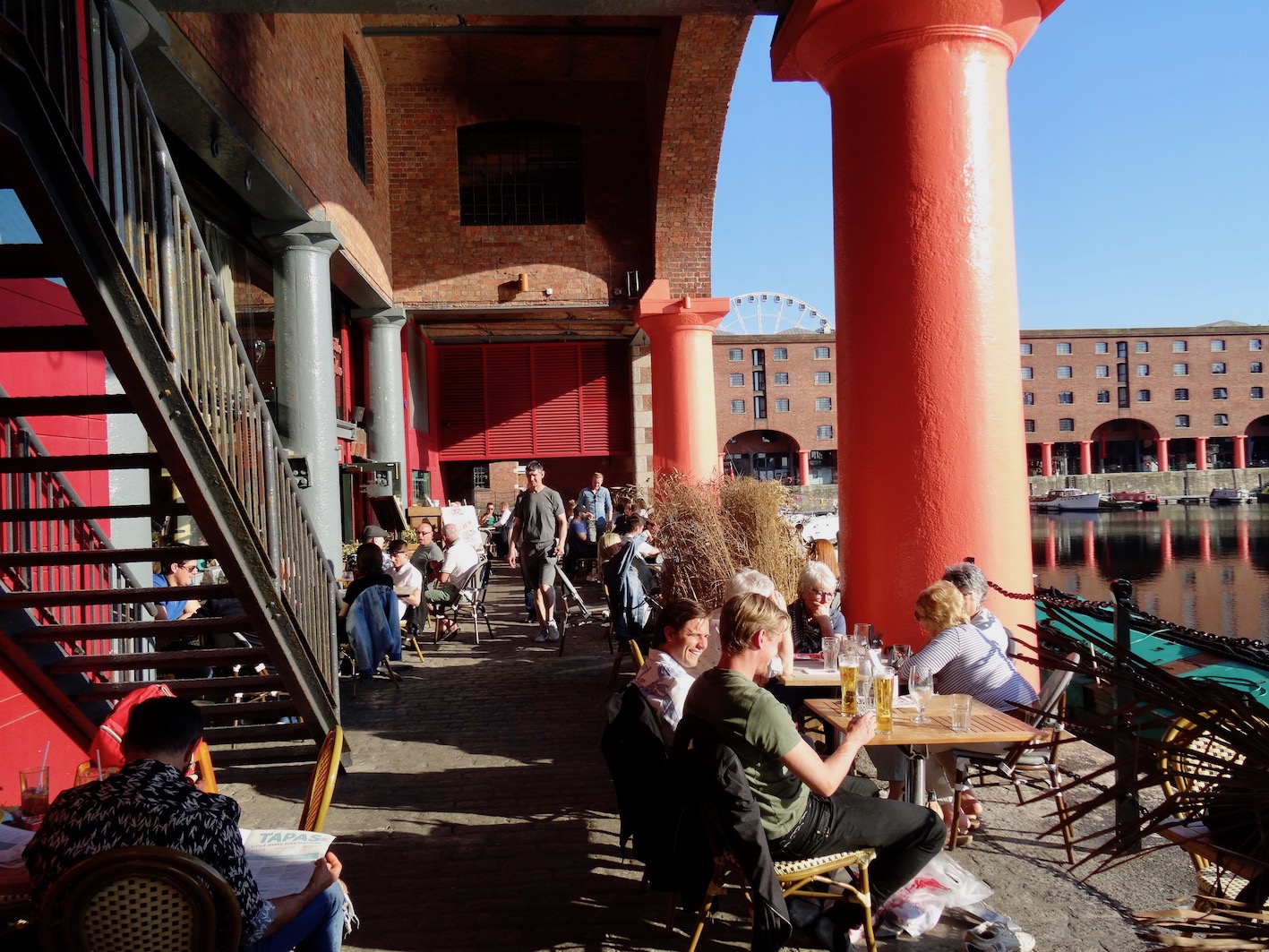 Within Royal Albert Dock itself there’s an impressive array of bars, cafes and restaurants to choose from with British, Thai, Cuban and Catalonian among the many menu options. Click here for a detailed overview of the food and drink options at Albert Dock.

If like me you’ve got an incurable sweet tooth, don’t miss Albert Dock’s Quay Confectionery, where most of the sweets, chocolate, fudge and biscuits come with a lavish British/Beatles design. Sweet tooth or not, it’s worth coming here simply to see the amazing Beatles mural in the window constructed entirely from jellybeans!

You can marry up a visit to Quay Confectionery with a look inside Liverpool Pictures, an independent art gallery with an extensive range of historical prints and originals from Liverpool and the surrounding areas. These guys have been here since 1991 and pride themselves on championing artists either from Liverpool or now living in the area. For more info take a look at their website. 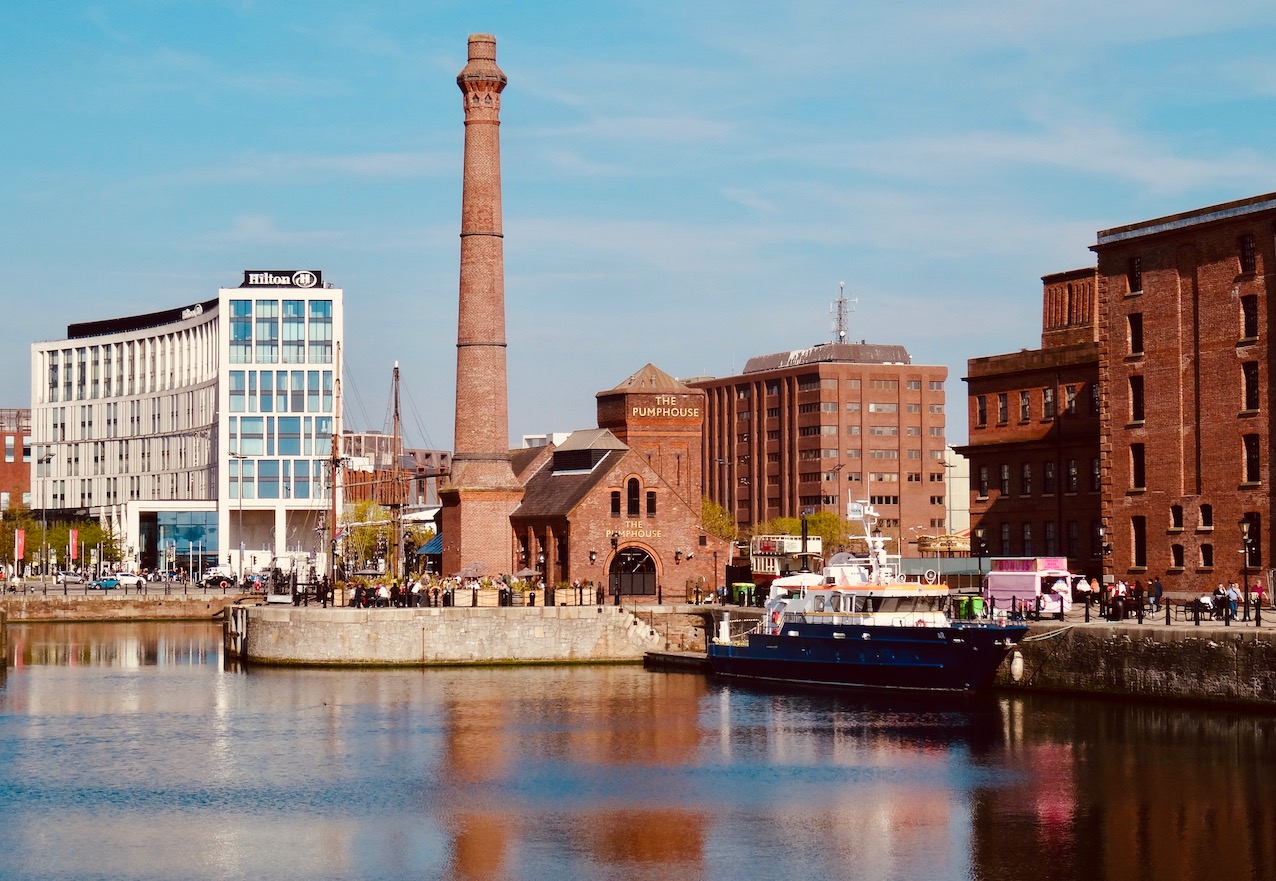 Just looking for a beer? Look no further than The Pumphouse, a traditional pub based in Albert Dock’s actual pumphouse dating back to 1878. Traditional British dishes are served here and there’s an outdoor area with fine views across the dock.