May 2019. It was another sunny day in Liverpool, so Steppers and I knew we had to take full advantage with a visit to the city’s historical and much-loved Sefton Park. The park as we know it today began life in 1867 when The Liverpool Corporation bought it off a ludicrously wealthy bloke called The Earl of Sefton, who had acquired it after its days as a royal deer park.

May 2019. The Liverpool Corporation decided to hold a grand competition where designers could submit their entries for how this new Liverpool park would look. In the end a duo of French (Edouard Andre) and English (Lewis Hornblower) architects got the nod and Sefton Park opened its doors in 1872 with a cricket ground and a lake for rowboats. 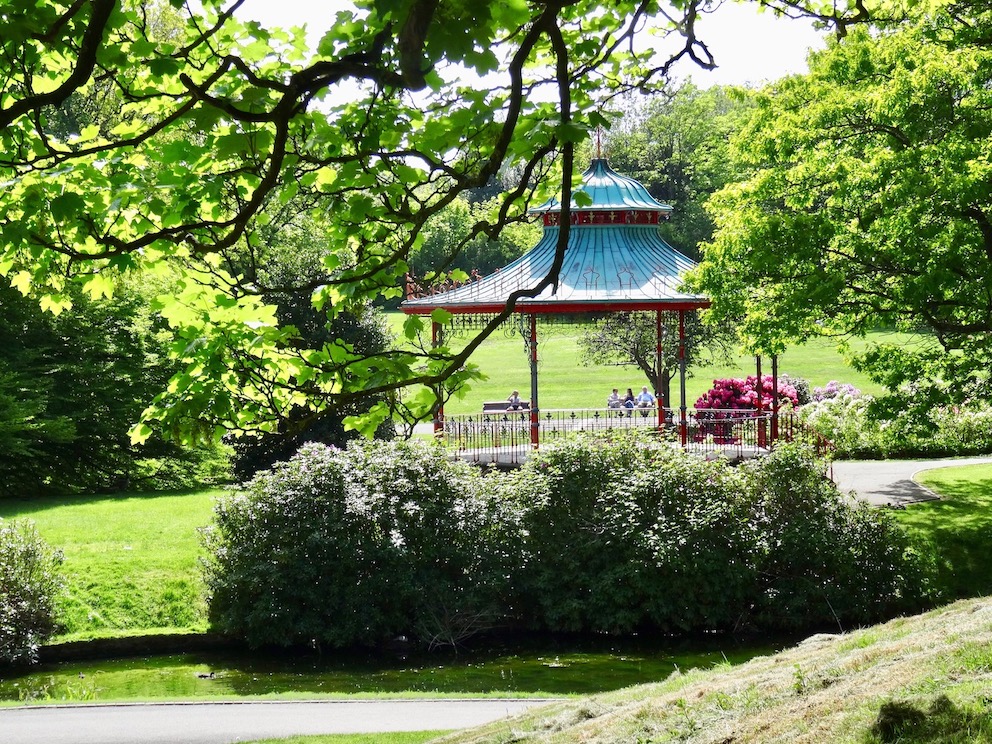 May 2019. Sefton Park is also a minor site for Beatles fanatics coming to Liverpool on pilgrimages from all over the world. It’s widely believed that this is where John Lennon’s mother (Julia Stanley) and father (Alf Lennon) first met in 1927. The used to meet up at this old Victorian bandstand, which in turn formed part of the inspiration for McCartney’s Sgt Peppers Lonely Hearts Club Band. Both Lennon and McCartney spent hours of their youth messing about in Sefton Park, where concerts were often held in and around the bandstand.

May 2019. There are a number of statues to be found around Sefton Park. One of these is a memorial to William Rathbone V, who served as Mayor of Liverpool In the late 1830s. If ever a son of Liverpool truly deserves a statue it’s Rathbone, who used his time in office to establish public baths and washhouses during the great Cholera epidemic. He also played a key role in providing financial relief during the great Irish famine of the 1840s.

May 2019. Rathbone’s statue is in a quiet corner of the park and a popular reading spot. The perfect place for you to settle down with that Johan Cruyff biography you’ve been meaning to start on.

Sefton Park is all very pleasant, but there hadn’t been a bona fide wow moment until we reached Palm House, a gorgeous, octagonal Victorian conservatory. Dating back to 1896, it was opened as a plant house and went on to form one of Britain’s most impressive collections of rare and exotic plants.

Palm House was heavily damaged by bombing during The Liverpool Blitz in 1941 and wasn’t properly restored until the end of the decade. Unfortunately the building fell into near total decay in the 1980s before finally being brought back to its former glory in 1993, courtesy of National Lottery funding to the tune of £3.5 million! Today a Palm House volunteer greets you at the door and is happy to answer any questions you may have.

Gaze up at Palm House’s very impressive three-tiered dome, which is particularly splendorous on an afternoon like this with blue skies and sunshine streaming in through the palm trees.

Like Sefton Park itself, entrance to Palm House is free, though they do accept donations at the door. I was more than happy to stick a pound in their box, while you can also help out by grabbing a drink and a bite at their little cafe. Which is exactly what this local artist had done prior to starting work on a sketch of the dome.

There are a handful of cosy cafes to be found in Sefton Park. Steppers and I grabbed some lunch in the tiny Sefton Park Cafe at their outdoor seating by the lake. I’m pleased to report that the coffee was decent and the crumpets suitably buttery. A shout out goes to the excellent waitress that day who kept smiling despite the fact that she was absolutely rushed off her feet and running the entire operation solo.

Sefton Park is open twenty four hours a day, seven days a week. For more info, take a look at their website.