May 2019. So this was one of CNN’s ugliest cathedrals in the world? This was the “hideous eyesore” that stands only as a personal insult to those who have to pray in it? This was the building that all those TripAdvisor moaners had ranted about to the point of near self-combustion? Not sure if I’m missing something, but as I arrived at Liverpool Metropolitan Cathedral on a sunny May afternoon, my first reaction was “Wow, pretty impressive!”.

May 2019. I particularly liked the two towering stained-glass columns that flank the stone staircase leading up to the cathedral entrance. Created by the renowned German artist Raphael Seitz, the columns herald your arrival at the cathedral and, if you peer through them, provide an abstract overview of the cathedral façade. If you thought it was ugly before… 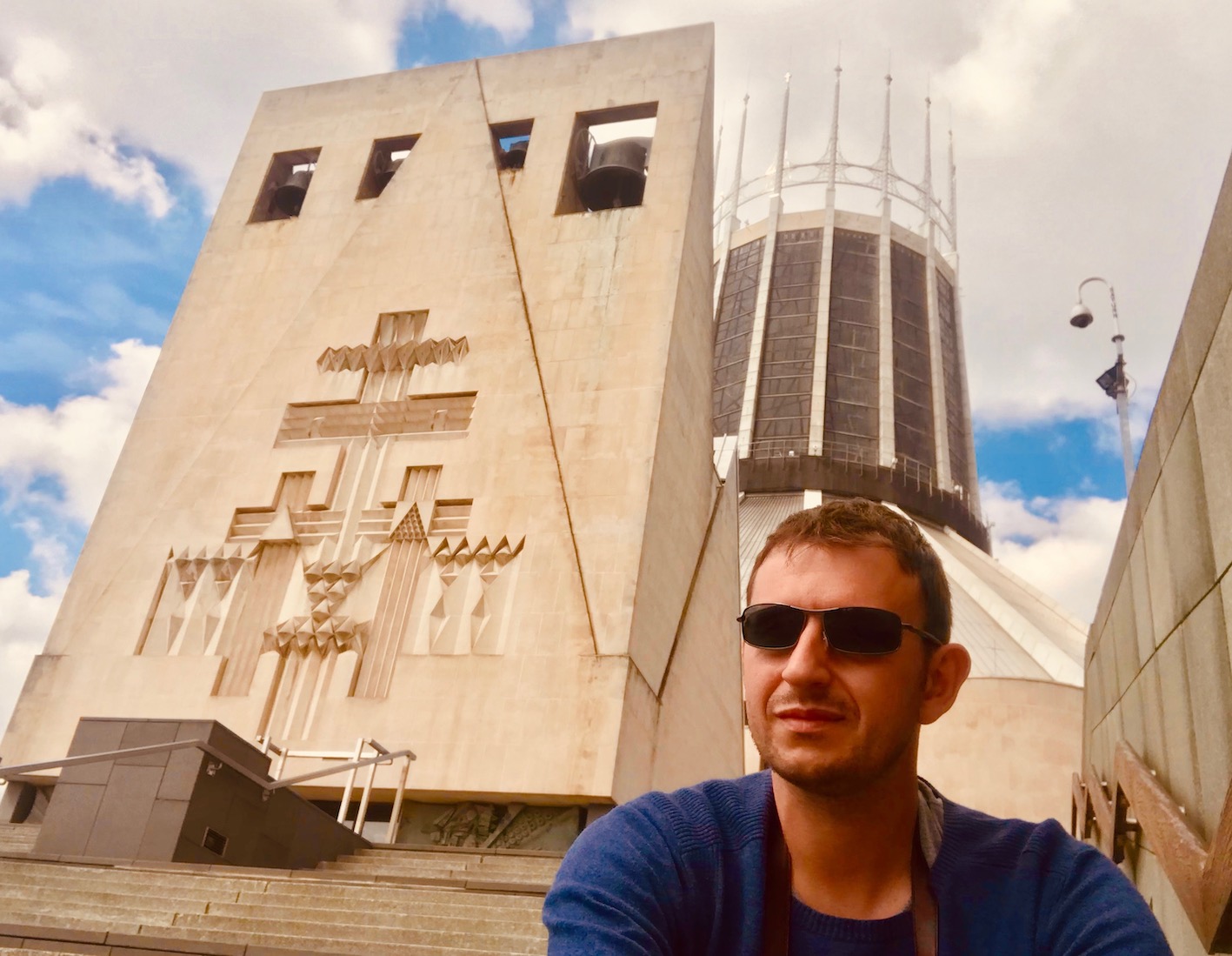 May 2019. Liverpool Metropolitan Cathedral is perhaps better known by its nickname Paddy’s Wigwam, a reference to its teepee-like shape and that many of its worshippers are of Irish descent. Construction of the opinion-splitting building began in 1962 by the architect Frederick Gibberd, the winner of a worldwide design competition. It took five years to complete, opening to the public on the 14th of May 1967.

May 2019. Entrance to Liverpool Metropolitan Cathedral is free, so just head in and check out the exhibition on the history of the area spanning a thousand years.

May 2019. Entering the interior was another wow moment for me. Not your typical cathedral I’d say and again I figured this was almost certainly not going to be everyone’s cup of tea. Bathed in an almost vampiric blue light, the floor is grey marble and the main altar is made from white marble shipped in from Macedonia. Because they could.

There’s some truly impressive art to seek out throughout Liverpool Metropolitan Cathedral, most of which can be found in the thirteen chapels that line the perimeter. You can find Stephen Foster’s painted wood relief carvings (pictured above) in St. Joseph’s Chapel. The chapel is also houses the tomb of Archbishop Derek Worlock, who served the city between 1976 and 1996.

Looking for some Paddy’s Wigwam bling? Then cast your peepers over this sculpture of Abraham by Sean Rice. My biblical history isn’t up to much, so I actually had to Google who exactly Abraham was. Did he play for Chelsea? It turned out he did not. Instead, he’s seen as the common ancestor of the Jewish and Arab races. Trumpeted as a figure of ultimate faith and obedience, he was put to an agonising test by God, who commanded Abraham to slay his beloved son Isaac as an offering. Preparing himself to commit murder, the legend goes that an angel appeared at the eleventh hour to Tell Abraham that he had proved his loyalty and was therefore excused of the grisly deed.

Another highlight is the juxtaposition of statue and woven tapestry in The Chapel of St. Anne. The hand woven tapestry is by the artist Jill Hutchinson and was made from yarns and recycled materials, including plastic. The trees actually stick out of the weaving, creating a 3D effect! 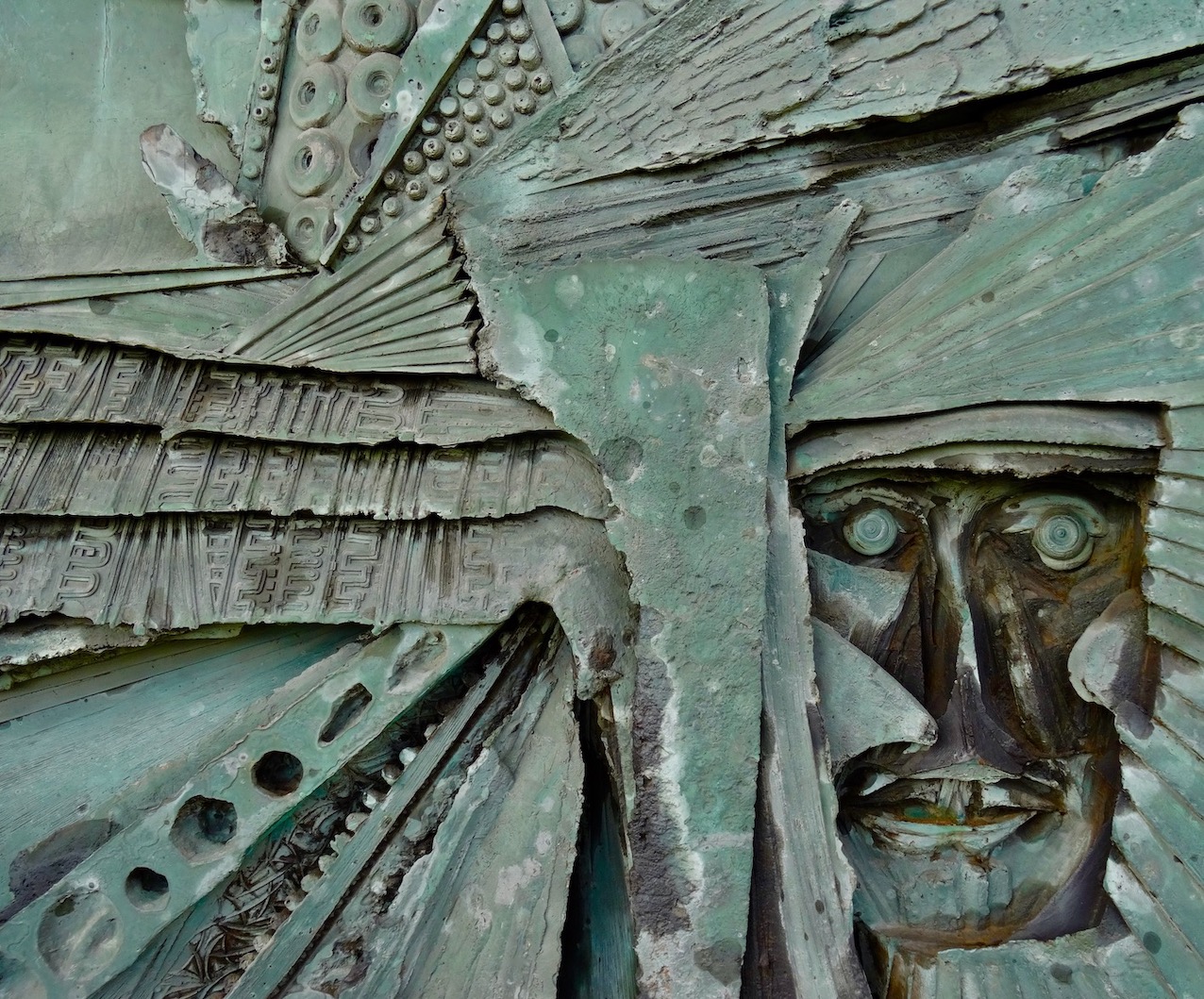 Liverpool Metropolitan Cathedral is open seven days a week between 07:30-17:30. While general entrance is free, a £3 fee is required to enter the crypt. Donations are accepted and gratefully so, as according to one website Paddy’s Wigwam costs over £4000 a day to maintain. Now THAT’S ugly.

For more on this opinion-splitting Cathedral, head to their official website.