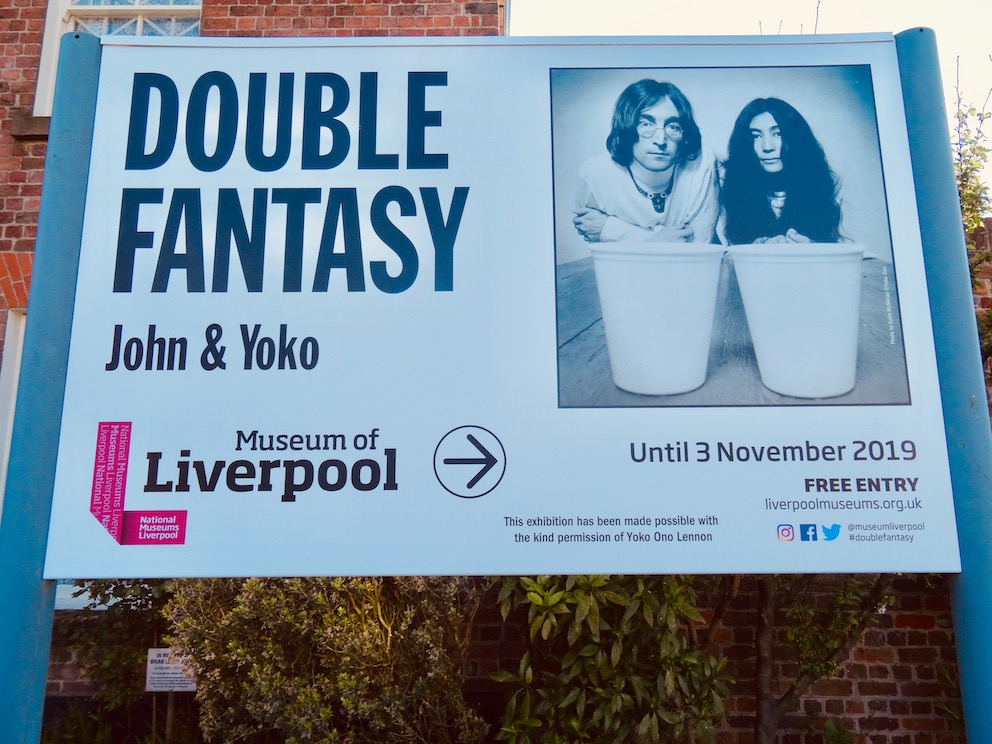 May 2019. No matter what time of year you come to Liverpool there’s virtually always a Beatles exhibition or three to compliment the city’s established Fab Four sites. During my stay in the city, The Museum of Liverpool was hosting the Double Fantasy – John and Yoko Exhibition, the world’s first art space to tell the story of John Lennon and Yoko Ono in their own words, music, art and film. 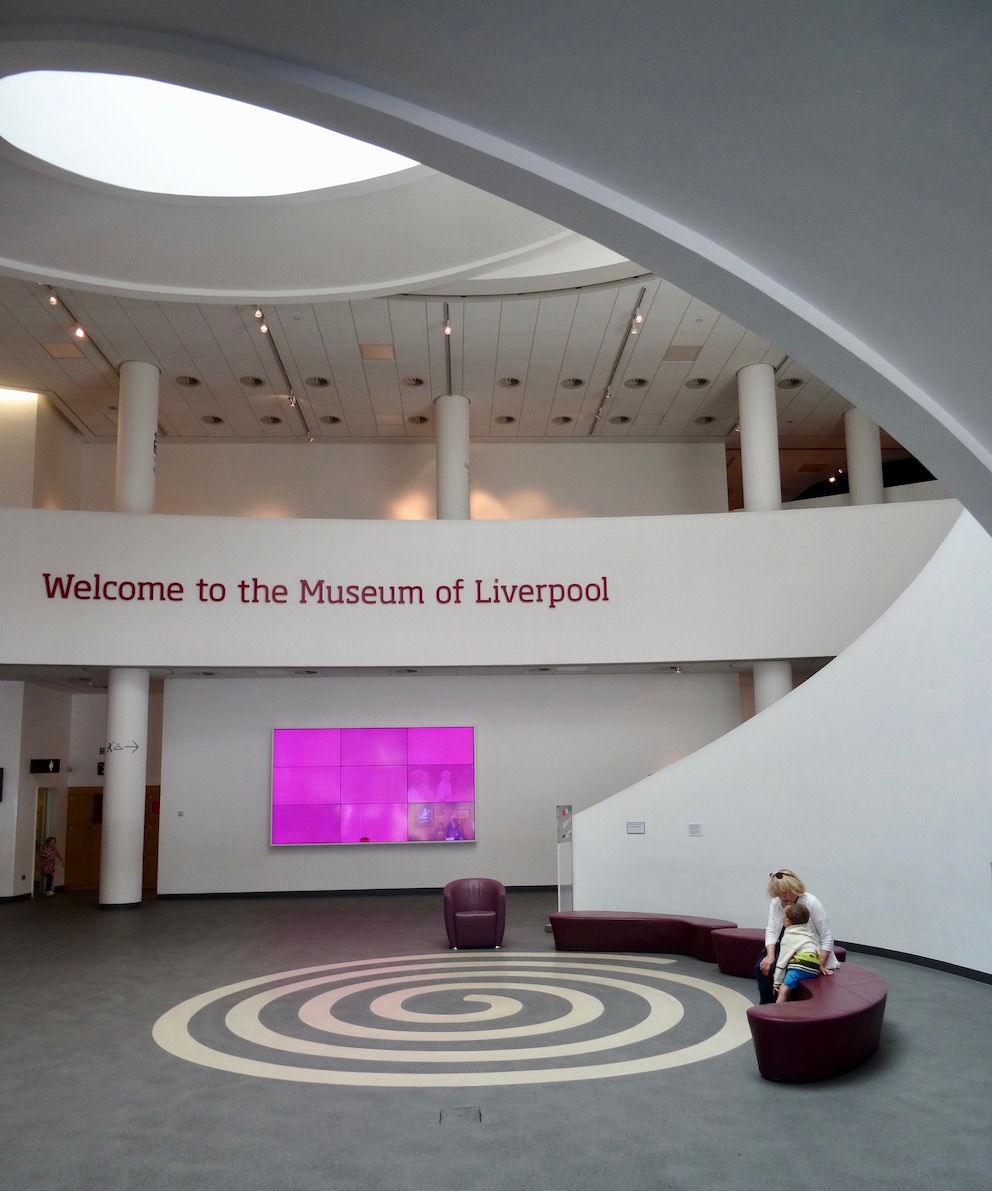 The Museum of Liverpool. 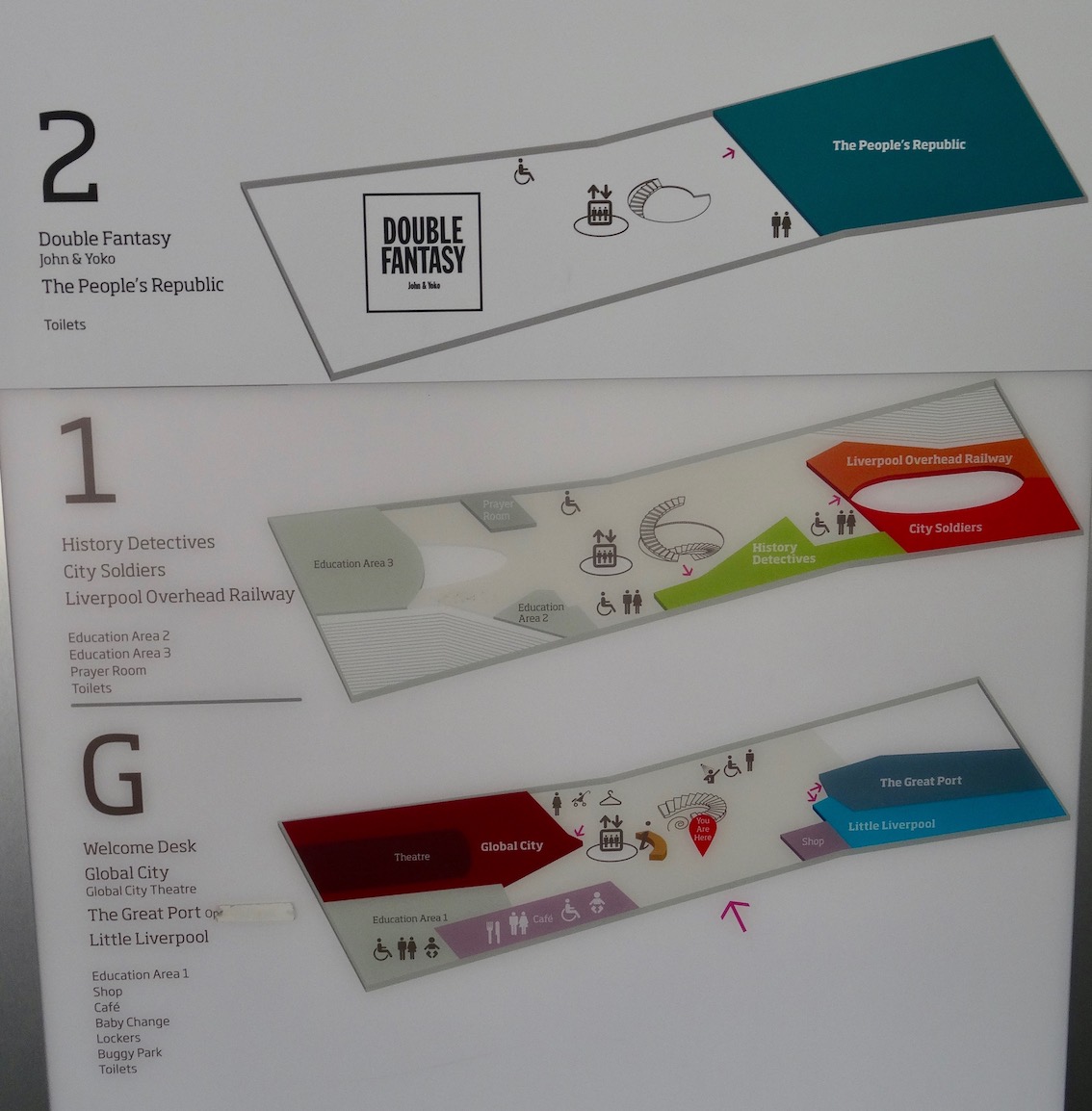 Floor plan, The Museum of Liverpool.

May 2019. The Double Fantasy – John and Yoko Exhibition takes up three quarters of The Museum of Liverpool’s second floor. Just head into the main hall and take the elevator up, there’s no entrance fee.

A collection of Yoko Ono’s Wish Trees, Museum of Liverpool.

May 2019. Before you enter the actual exhibition, take a moment to check out a collection of Yoko’s Wish Trees, an art installation she began back in 1981. The idea is simple: Make a wish, write it down on a piece of paper and tie it to a branch of the wish tree.

One of Yoko Ono’s Wish Trees, Museum of Liverpool.

Yoko’s Wish Trees have travelled all over the world, from London, Dublin and Paris, to New York, San Francisco, Venice, Tokyo and Buenos Aires. Ono claims to have never read any of the wishes as a mark of respect to those who bare their souls on her trees.

May 2019. Anyone familiar with the narrative knows that John and Yoko met at London’s Indica Gallery on the 7th of November 1966. The Double Fantasy Exhibition creates a mockup of what it would have looked like that day as John the world-famous rock star came to see Unfinished Paintings and Objects, an exhibition by Yoko, a little known avant-garde artist. 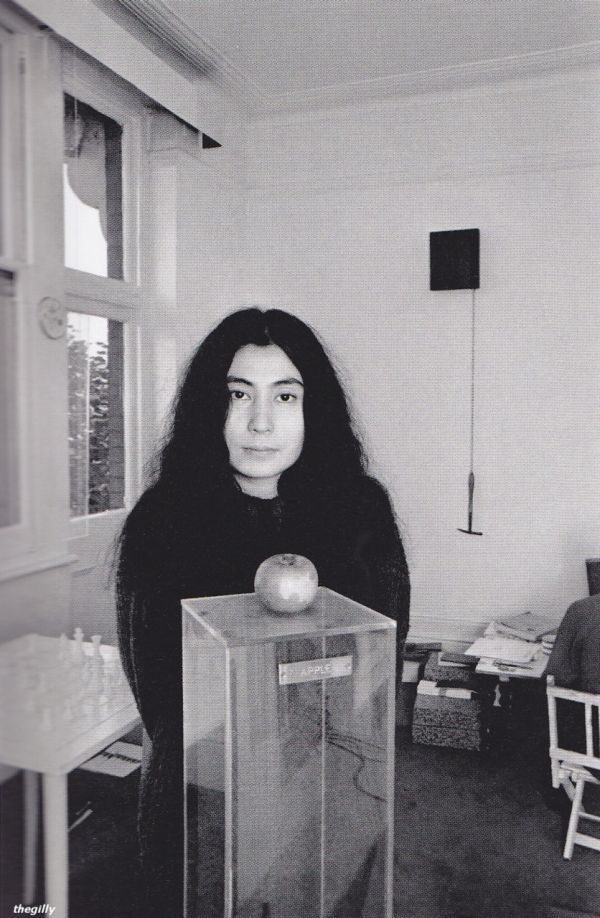 Yoko Ono with one of her conceptual apples, 1966.

Faced with a series of high-priced conceptual items, such as an apple and a bag of nails, initially Lennon was unimpressed, describing the show as “a con”. But, as the story goes, John’s mood greatly improved when he climbed a ladder to read a tiny message that simply said “yes”. Lennon found this uplifting and was encouraged to converse directly with Ono, the two of them agreeing that John could “pay imaginary money to hammer an imaginary nail” instead of interacting in another of her exhibits in the usual way. A connection had been made and there was no turning back.

May 2019. Although they had kept in touch, it wasn’t until May 1968 that Lennon and Ono got jiggy with it when Yoko visited John’s Kenwood mansion in Surrey. Fuelled by a mutual fascination and god knows what else, the two of them worked feverishly through the night to create their first album of music together, the highly experimental soundscapes of Unfinished Music Number 1: Two Virgins. According to Lennon himself, they celebrated the achievement by “making love at dawn”.

As huge of a Lennon fan as I am, I’ve admittedly only listened to that record once and it was more than enough. A thirty-minute onslaught of whistling, fragmented conversations, out-of-tune-piano bashing, Lennon screams and Yoko’s trademark howling, Two Virgins might be unlistenable but there’s no denying that it serves as a fascinating document of the times and a key moment in the John and Yoko story. Standing there in the Double Fantasy Exhibition that day and for some reason all I could think about was Cynthia Lennon’s account of walking in on her husband and Yoko the next morning. As detailed in her engaging autobiography John, she knew her marriage was over when she returned home to find them sitting on the floor wearing nothing but dressing gowns.

May 2019. After their Two Virgins night, Lennon and Ono became inseparable and a year later on the 20th of March 1969 they tied the knot at The British Consulate in Gibraltar. As with my experience at The Beatles Story, my appreciation of The Double Fantasy Exhibition was greatly enhanced by its fantastic collection of personal items. Pictured above is Yoko’s white crepe minidress from their big day, along with John’s suit jacket. Getting to exchange vows on British soil had been quite the ordeal, which of course John ended up writing a song about through The Ballad of John and Yoko.

In what felt like a huge revelation, I was looking through the accompany wedding photos when I suddenly realised that I’d once walked past the very hotel John and Yoko stayed in on their wedding night! They bedded down at The Rock Hotel, which I’d taken a shot of as I strolled through Alameda Botanic Gardens during my visit to Gibraltar in March 2017. If I’d have been more clued up I would have gone inside to investigate! 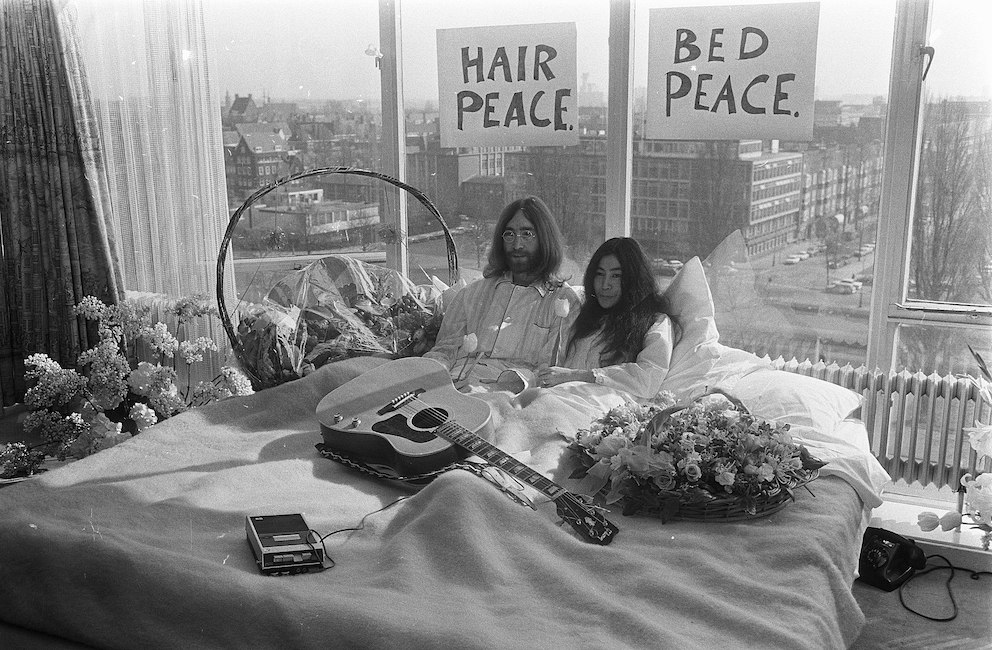 John and Yoko at The Amsterdam Bed-In. The Hilton Hotel, March 1969.

May 2019. John and Yoko followed up their low key wedding with an insanely high profile honeymoon period in which they staged a pair of famous Bed-Ins in the name of world peace. Intended as non-violent protests against The War in Vietnam, the first of these televised events took place in The Hilton Hotel, Amsterdam, between the 25th and the 31st of March 1969.

The original Montreal Bed-In bedspread, along with John’s acoustic guitar from 1969.

The second Bed-In happened in Montreal at The Queen Elizabeth Hotel between May the 26th and the 1st of June 1969. And The Double Fantasy Exhibition – John and Yoko proudly displays the actual bedspread used during their stay, along with John’s Gibson 1160-E acoustic guitar. The duvet was specially designed for the occasion by the artist Christine Kemp. “There were we like two angels in bed, with flowers all around us, and peace and love on our heads. We were fully clothed; the bed was just an accessory”, explained Lennon.

May 2019. I was also pleased to see that the Double Fantasy Exhibition didn’t shy away from the difficult parts of John and Yoko’s story. As such, there’s a section on all the media negativity about the couple, including their interview with Michael Parkinson where John reveals his disgust at his wife’s treatment from fans and journalists. And there’s a corner dealing with Lennon’s well-documented green card struggles and the era of bitterness and paranoia that set in under the Nixon administration.

May 2019. There’s even a part on John’s infamous Lost Weekend, a period of all-out personal crisis following the breakdown of his marriage. On the verge of splitting up, Yoko inventively (not to mention bizarrely) suggested that John take some time away and have an affair with their personal assistant, May Pang. The results were almost disastrous as John slipped into depression and alcoholism. Eighteen months later he was back with Yoko.

May 2019. No matter how familiar you are with the Double Fantasy – John and Yoko narrative, it’s got to be worth coming here simply to see some of their handwritten lyrics. Many of these sheets were donated by Yoko personally.

May 2019. I’ve never understood the hatred for Yoko and the downright derision that most of her music has faced over the years. Putting the Unfinished Recordings series to one side, I’ve always enjoyed her work and I was particularly pleased to see that the Double Fantasy Exhibition has her original scribblings for Walking on Thin Ice, probably my favourite Ono track.

May 2019. The late nineteen seventies were the happiest years of John’s life as he settled into a routine of domestic bliss with Yoko and their son Sean. Some of the home video footage of the Lennons from this period, both at home and in the studio, is simultaneously lovely and heartbreaking to see. I liked the way the exhibition didn’t deal with what happened on the 8th of December 1980 when John returned home to The Dakota Building after an evening at the studio. Instead, you’re left with an image of a naked John wrapped around Yoko on his last morning. The picture was taken by Annie Leibovitz for Rolling Stone Magazine. Later on Dave Sholin from RKO Radio came to conduct what turned out to be John Lennon’s final interview. 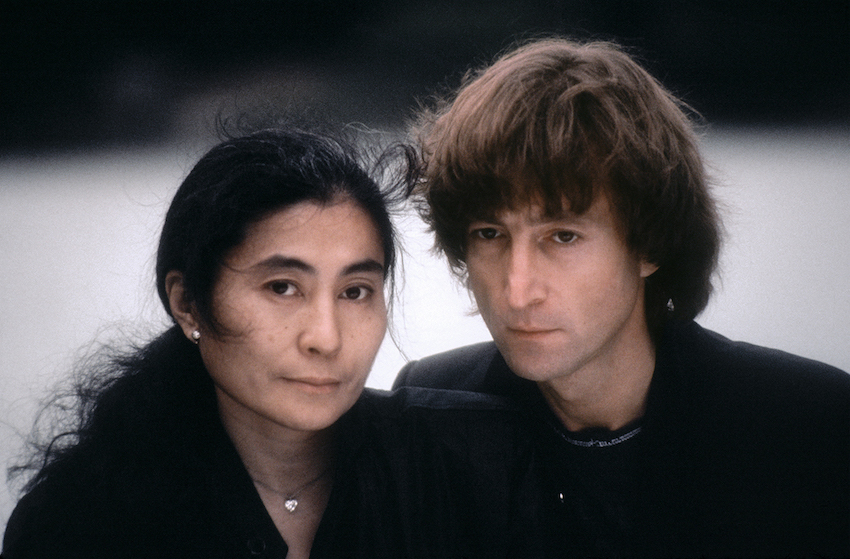 Double Fantasy Exhibition – John and Yoko can be enjoyed for free at The Museum of Liverpool until the 3rd of November 2019. For more info, check out their website.

For more on the greatest rock band in history, check out my other articles from The Beatles In Liverpool. Alternatively, have a read about my visit to Abbey Road in London, or check out my review of The White Album.