May 2019. Coming to Liverpool and seeing all The Beatles sites was a dream come true for me. Having toured The Beatles Story, visited the Double Fantasy Exhibition at The Museum of Liverpool and caught some live music at both The Cavern Pub and The Cavern Club on Mathew Street, it was finally time for the experience that had excited me most prior to my visit. For me the ultimate Beatles experience is a tour around the key city sites of the band’s early years, including John, Paul, George and Ringo’s childhood homes. Initially I was going to book a spot on the hugely popular Magical Mystery Bus Tour. But then, as I researched deeper, I found out about a local man called Ian Doyle and his Mad Day Out Beatles Taxi Tours.

The Beatles during their “Mad Day Out’ in the summer of 1968. Photo courtesy of Don McCullin.

May 2019. Basically, instead of being crammed onto a bus with fifty or so other people, my travel buddy Steppers and I could get a private taxi tour delivered by a Beatles expert with ten years’ experience ferrying fans around the city. Ian’s Mad Day Out Tours are a reference to the band’s day-long photo shoot around London in the summer of 1968 during the White Album recording sessions. Their jaunt took them all over the city that day, with snapshots taken by the celebrated war photographer Don McCullin. 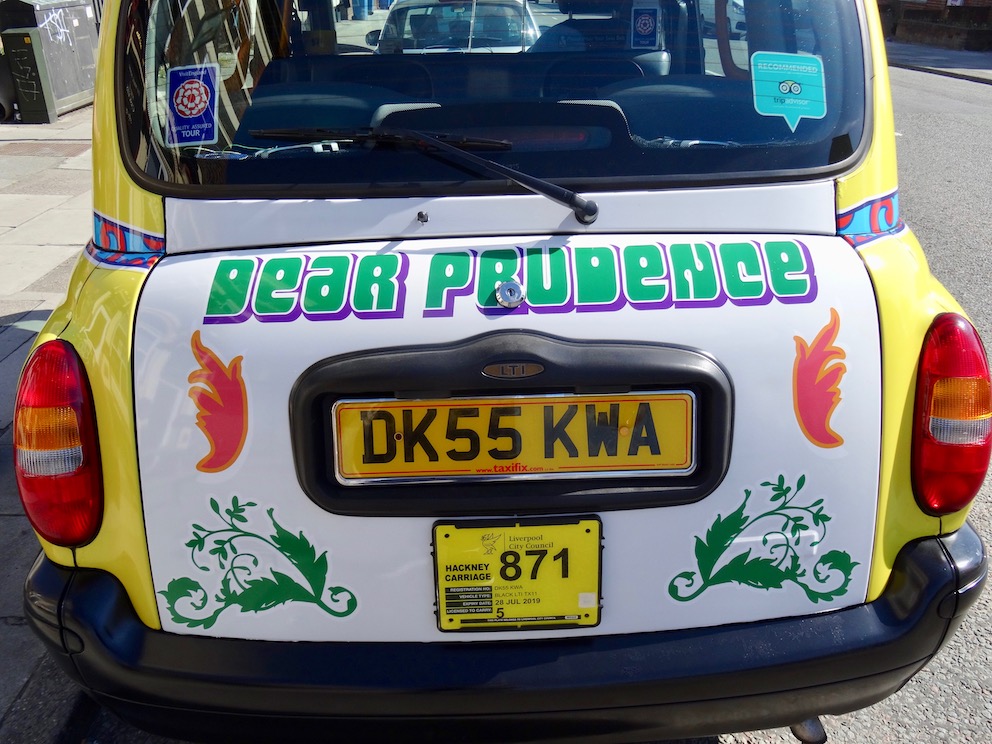 The more I read about Ian’s tours the more fascinated I became. And the icing on the cake? Our chariot that day would be Ian’s famous Dear Prudence taxi, lovingly and painstakingly converted in tribute to John Lennon’s 1960s psychedelic Rolls Royce. It didn’t take us long to throw the Magical Mystery Bus Tour idea out the window. 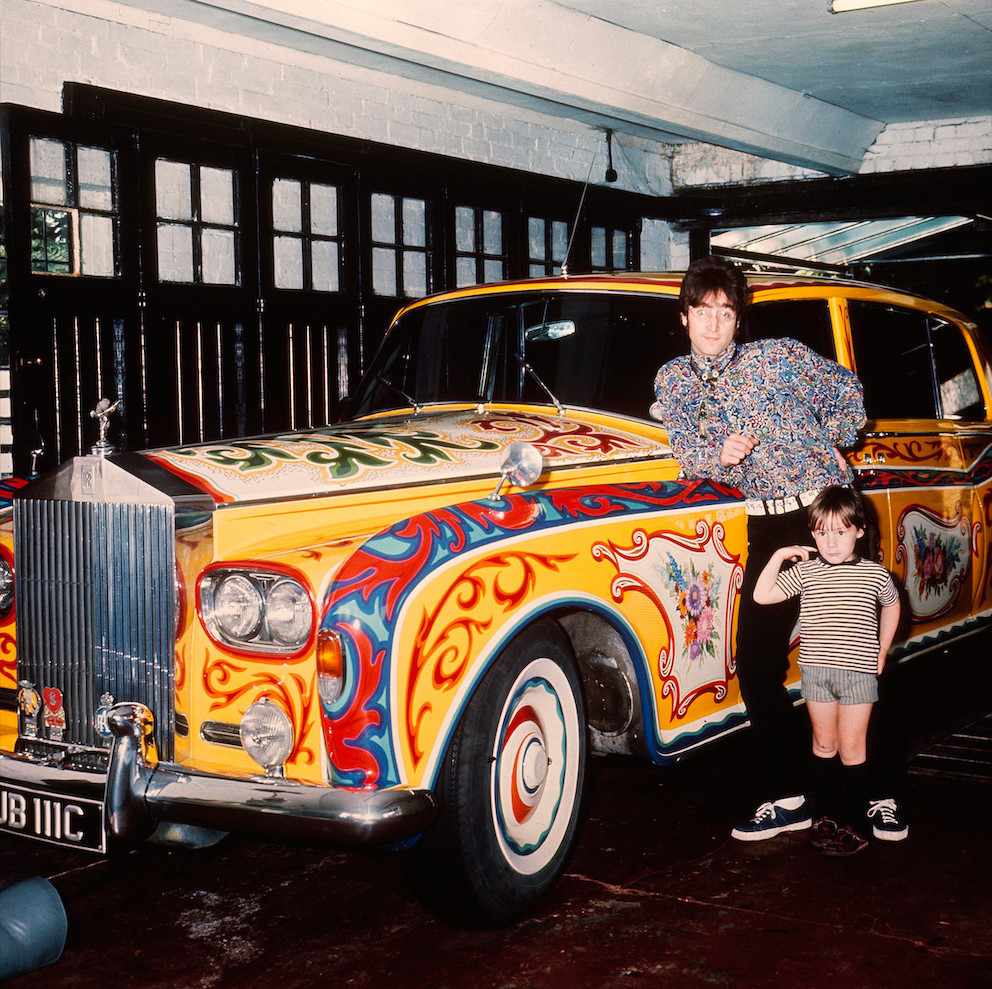 John Lennon with son Julian and his famous Roll-Royce, 1967.

May 2019. Ian came and picked up Steppers and I right outside our city digs at the amazing Hard Days Night Hotel. Wide of smile and firm of handshake, our guide seemed delighted to have a pair of “proper Beatles fans” on his hands as apparently he often finds himself lumbered with a more casual brand of visitor who typically spends the day ignoring his commentary and fiddling around with their phones. Wasting no time in getting the tour underway, we jumped into Dear Prudence and Ian shuttled us off to Admiral Grove, the understated street where a certain Richard Starkey lived for twenty years before rising to fame with The Beatles.

May 2019. Hopping out of Dear Prudence, Ian took us for a walk down Admiral Grove, explaining that Ringo wasn’t actually born here, but across the road at 9 Madlyn Street in a building that is now inaccessible as part of the area where the TV series Peaky Blinders was filmed. But in any case it was Admiral Grove that was Ringo’s real home and, as Ian cleverly shows with an archive photo featuring the man himself, the street has barely changed over the years.

May 2019. Ringo lived at 10 Admiral Grove with his mother Elsie and stepfather Harry and, once again, it was magical for me to see that the house looks just the same as it did over seventy years ago. As a sickly child, Ringo suffered long absences from school, so this is the place where he was taught to read and write. Notice the pink V for Victory letter above the door in tribute to Britain’s triumph in The Second World War.

Ringo outside 10 Admiral Grove with mother Elsie and stepfather Harry.

May 2019. Ian then walked us back to the entrance of Admiral Grove and directed our attention to a grand looking pub called The Empress. “Does it look familiar lads?” he asked us with an arched eyebrow. It did look very familiar, but I couldn’t quite put my finger on it. 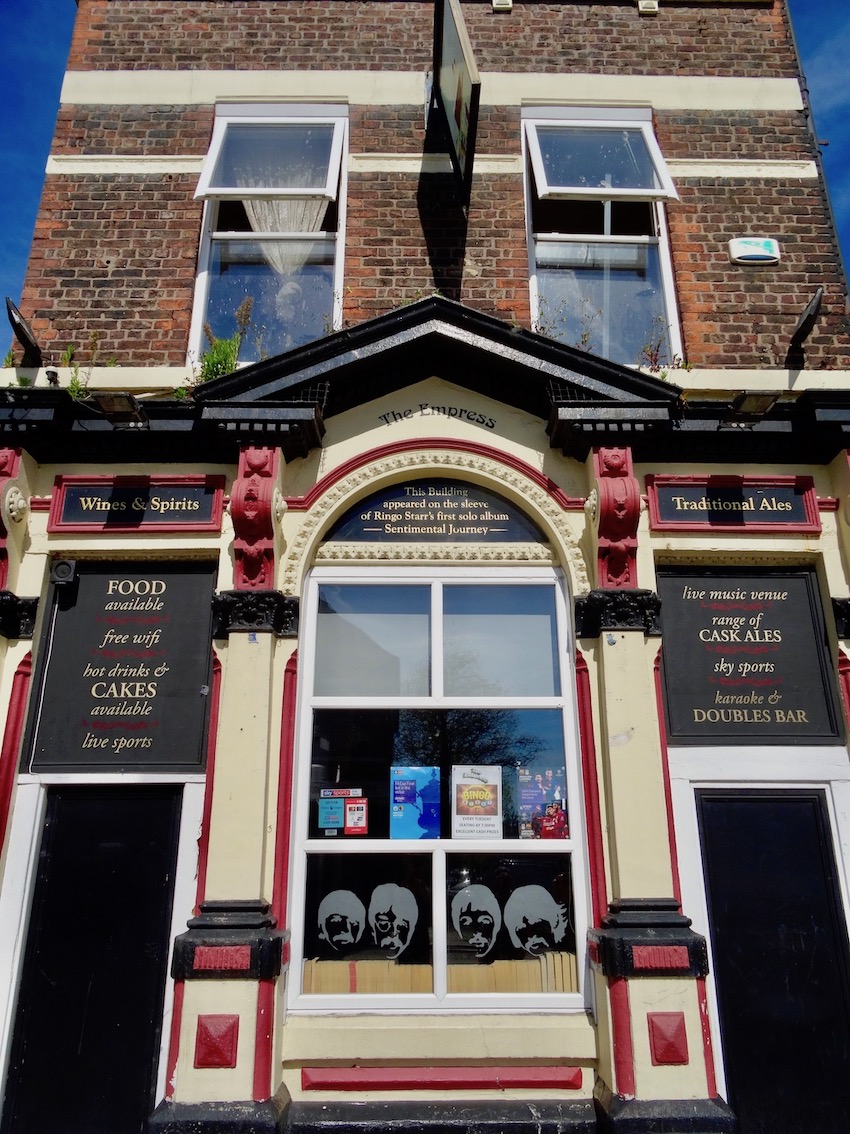 Located just twenty yards from his former home, The Empress was Ringo’s local watering hole. His mother Elsie worked here as a barmaid for a spell, while Ringo himself immortalised the place by putting it front and centre as the album cover for his 1970 solo album Sentimental Journey. A sign  recognising the Ringo connection was added to the pub in the 1990s. 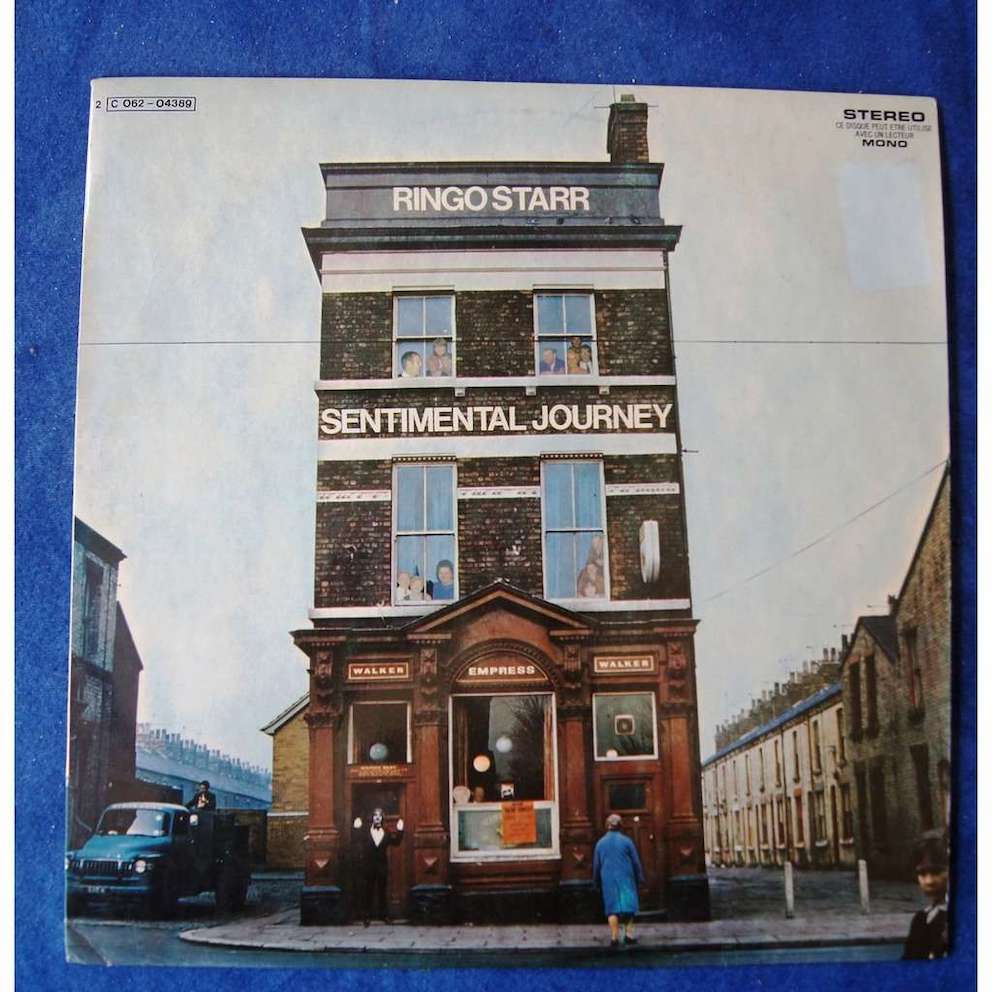 The Empress Pub as featured on the front cover of Ringo Starr’s 1970 album ‘Sentimental Journey’.

May 2019. From Admiral Grove Ian and Dear Prudence shuttled us off to the Sefton Park Hotel, a spot that I hadn’t anticipated or even been aware of. Overlooking the pretty boating lake at Sefton Park, this stylish three star hotel was the former home of original Beatles bassist Stuart Sutcliffe and back then the place was known as The Blenheim. 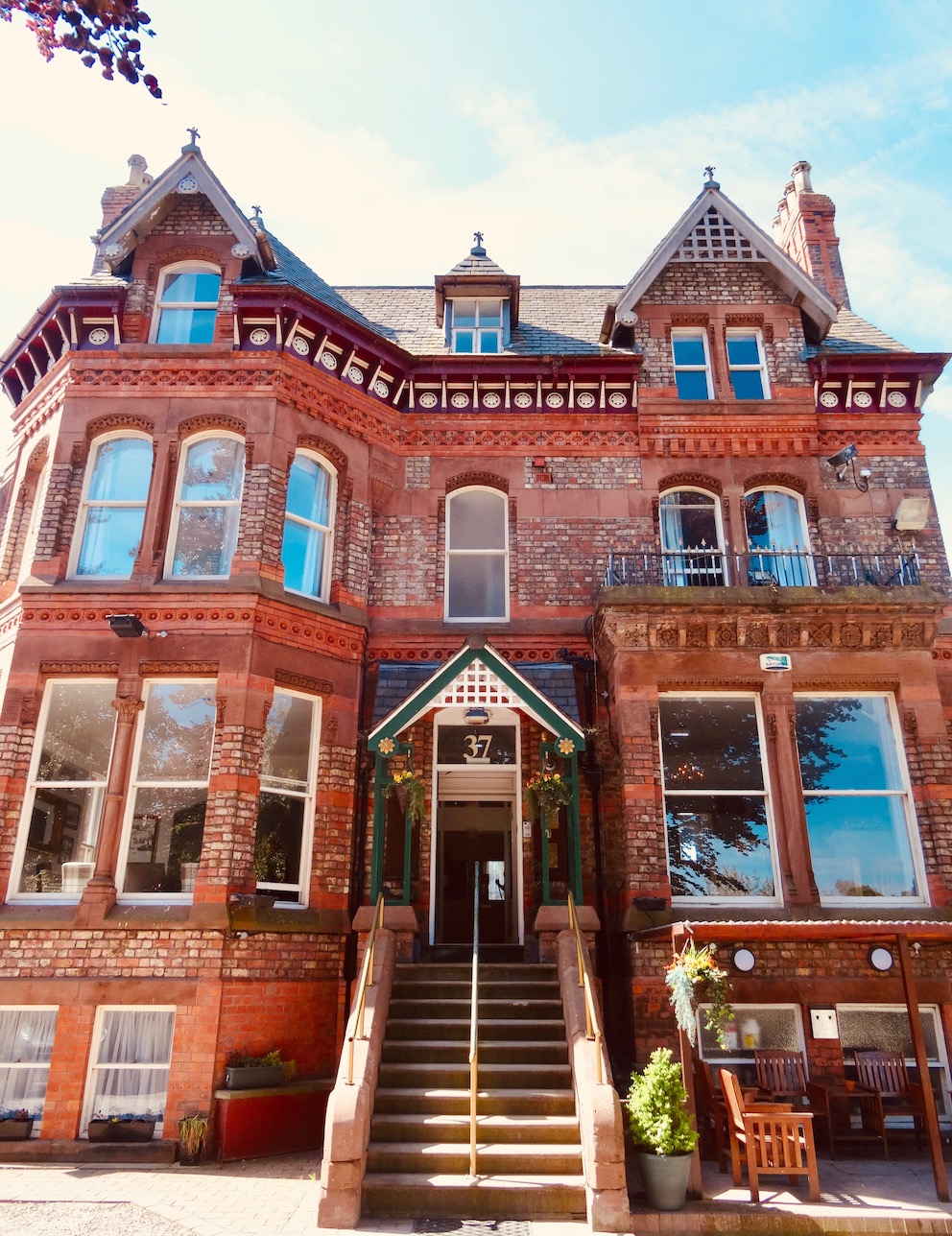 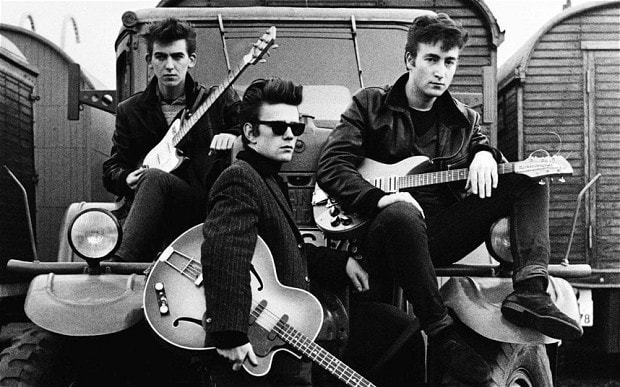 Having attended Liverpool Art College with his best friend John Lennon, Stuart was roped into joining the band and played during their infamous Hamburg days despite having virtually zero musical talent. Knowing he simply wasn’t meant to be a musician, Sutcliffe ended up leaving the group and staying in Hamburg to study art. He also got engaged during this period to the photographer Astrid Kirchherr, the woman credited by some as inventing The Beatles’ signature mop top haircuts. 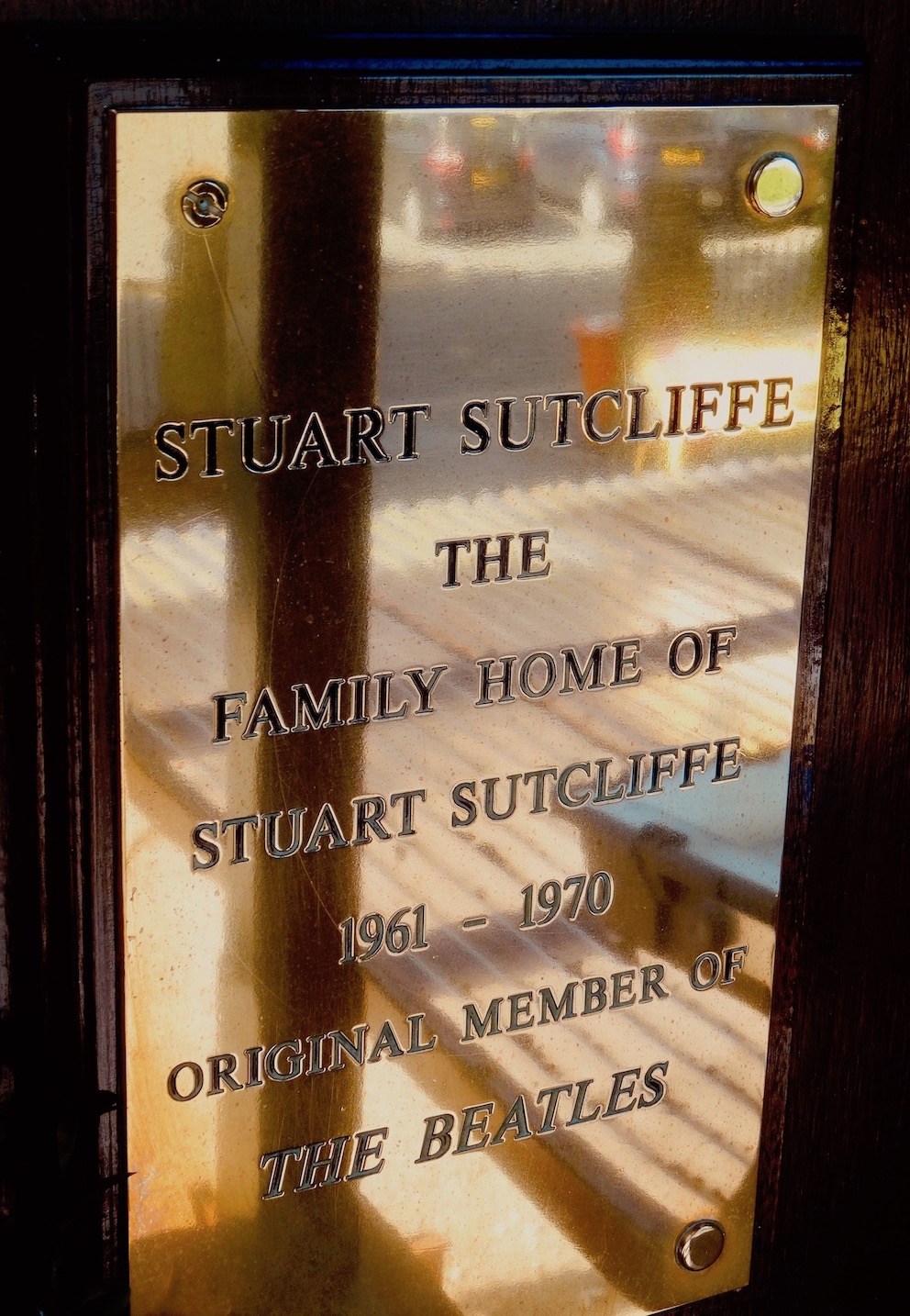 Ian parked up outside the hotel and led us up the entrance steps, where I was delighted to see Stuart’s role in The Beatles’ story has been given the attention it deserves with a shiny little plaque. 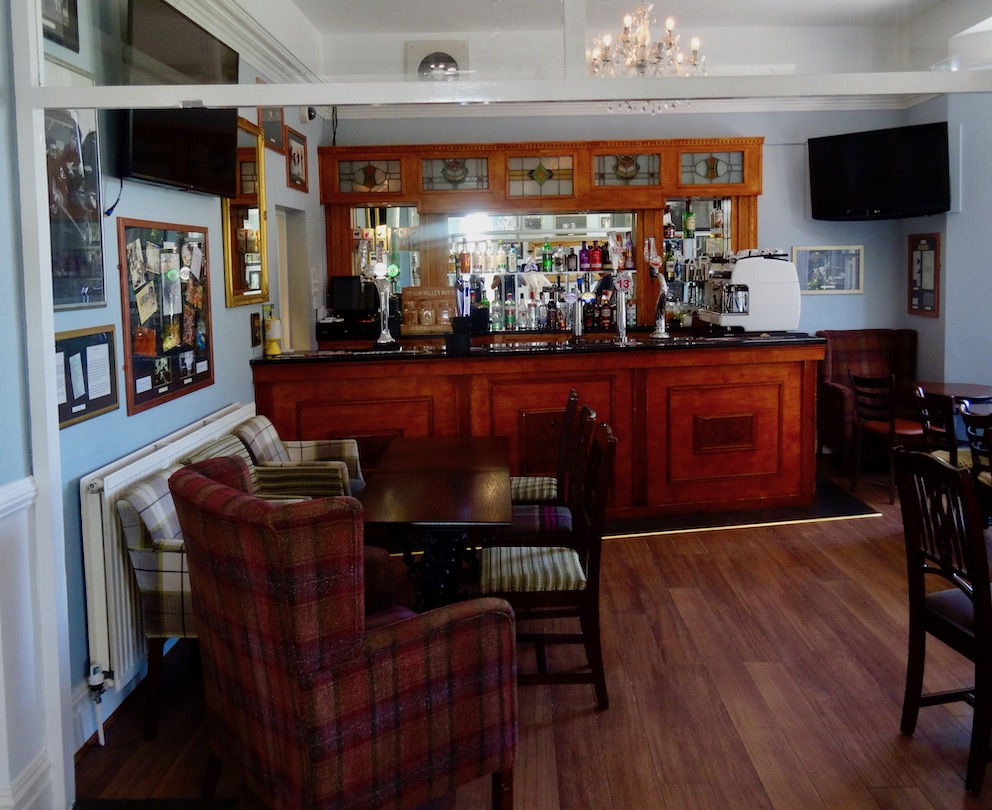 Inside Sefton Park Hotel Ian explained how Stuart and his mother Millie lived on the ground floor in separate rooms. The area that used to be Stuart’s room is now the bar. On the other side, in the restaurant section, framed photos of Sutcliffe and Lennon adorn the walls. Apparently Stuart had a fractious relationship with his mother and there was one particularly famous incident when he returned home from Hamburg with Astrid. Drunk and fuming, Millie Sutcliffe set about the house screaming that her son had betrayed his nation by shacking up with “a dreaded German”. Disgusted, Stuart took Astrid and left the house. This was to be his last visit to Liverpool and it’s not clear if he ever made it back to Blenheim. Stuart tragically died in Hamburg on the 10th of April 1962 having suffered a cerebral haemorrhage. He’d been experiencing unbearable headaches in the months before his death, but doctors were not able to get to the bottom of it. Sutcliffe was just twenty one at the time of his death. For those unfamiliar with the Stuart Sutcliffe story, a good starting point would be the 1994 movie Backbeat starring Stephen Dorff and Ian Hart,

May 2019. I cannot even tell you how cool it was when Dear Prudence gently turned us into Penny Lane. We drove about a quarter of the way down and Ian pulled up a short distance beyond that sign. I think it’s important to point out that there are lots of Penny Lane signs, but this is the one you want to see since it’s been autographed by fans from all over the world. 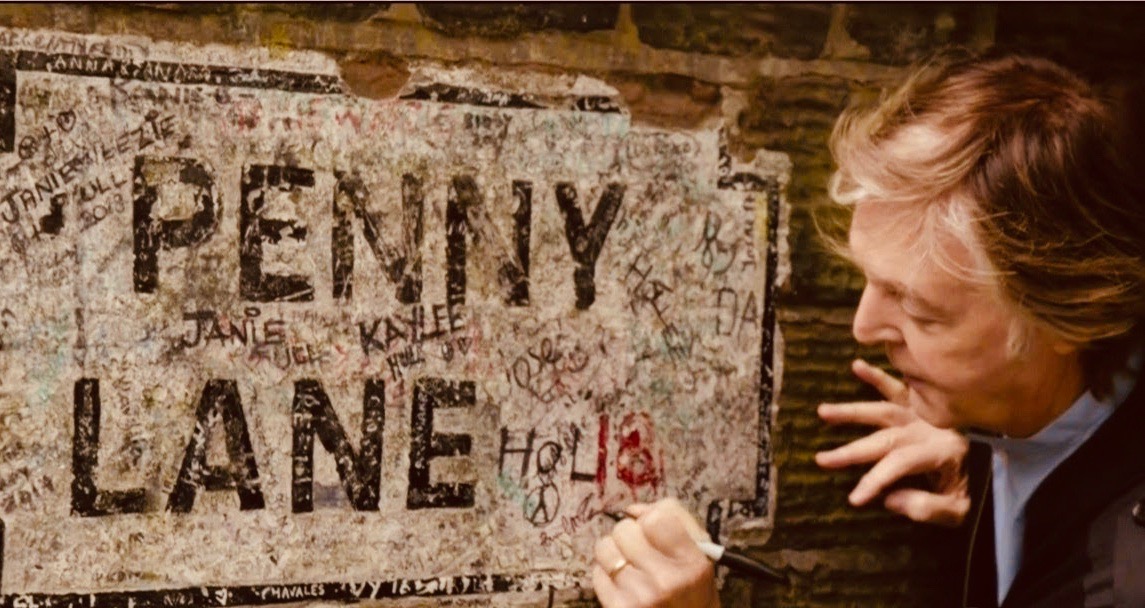 Its most important signature was added on June the 9th 2018 when Sir Paul McCartney himself came to scribble on the sign as part of the legendary Carpool Karaoke episode with James Corden. And I felt especially smug about my decision to take Ian’s Mad Day Out Taxi Tour when, just a few moments after our arrival, we saw The Magical Mystery Tour Bus drive by, stopping briefly by a totally irrelevant Penny Lane sign at the end of the road. It didn’t turn into the road and nobody got the chance to get off the bus! A huge score for us, Ian Doyle and Dear Prudence! 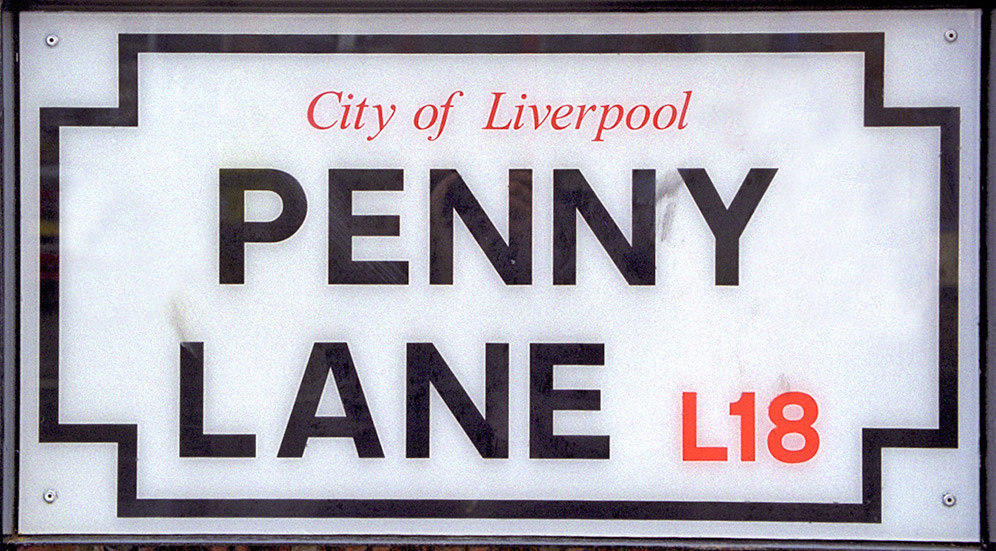 May 2019. From there we jumped back into Dear Prudence and Ian continued on down Penny Lane towards the famous roundabout. As we went, the car stereo kicked in and on came Penny Lane itself, a simply fantastic touch and one that’ll live long in the memory; Steppers, Ian and I all singing along as we gradually closed in on those famous Penny Lane landmarks. 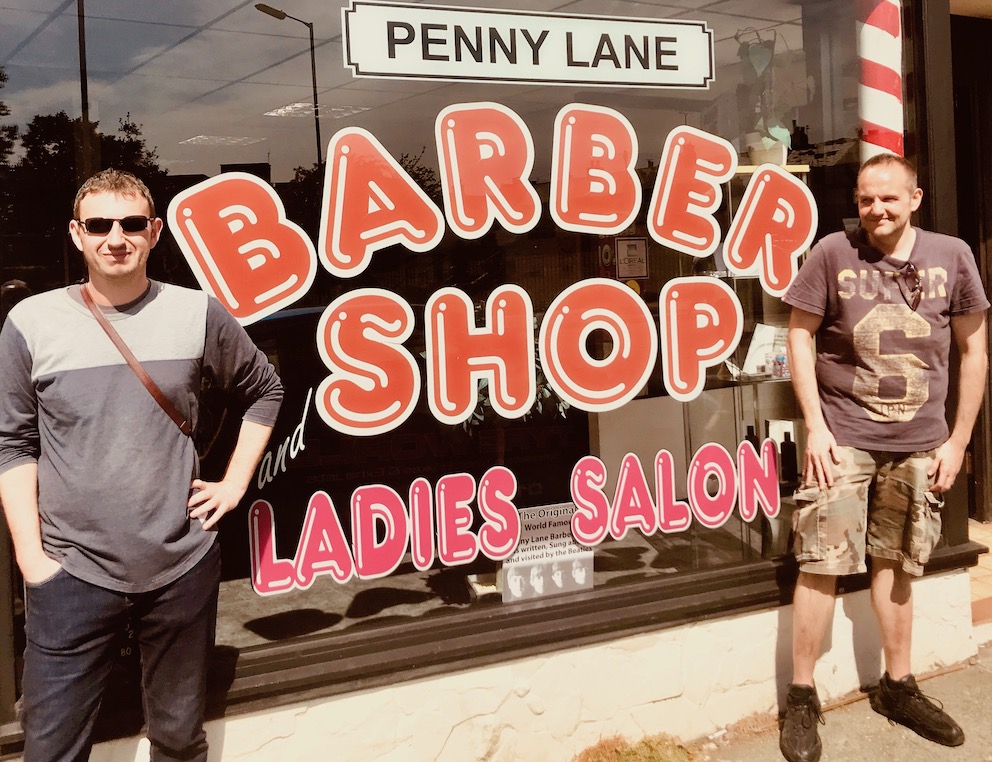 Of course we had to get Ian to take our photo outside “the barber shop”. Back during McCartney’s youth the place was called Bioletti’s, these days it’s known as Tony Slavin Barber Shop. 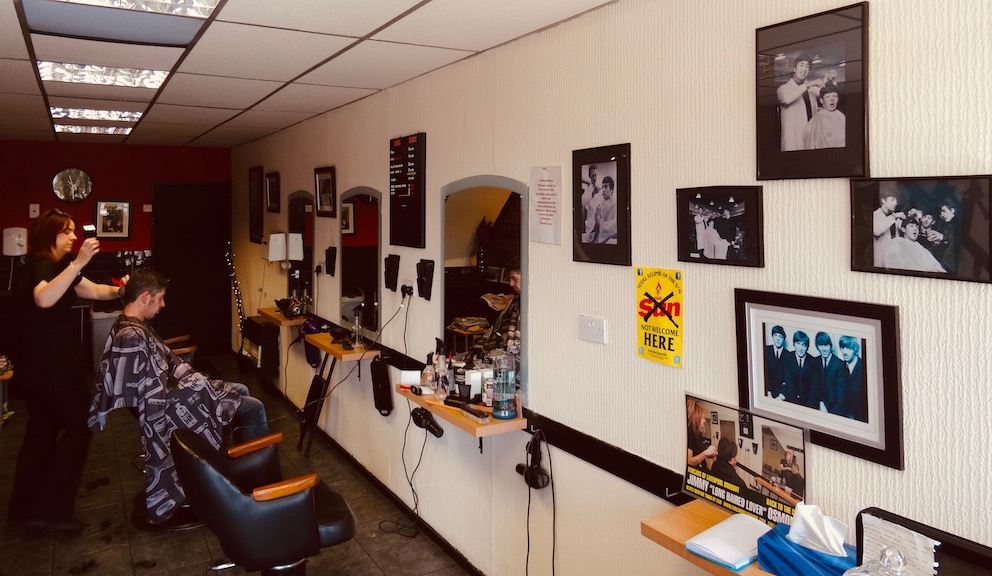 All The Beatles taxi tour companies stop outside the barber shop, but as a sign of respect to the business and its customers they won’t take you inside. I was desperate to take a look at the framed Beatles photographs I could spy through the window. So I cheekily nipped in, had a quick look, grabbed this hasty shot and ducked back out again before anyone had the chance to get shitty.

–In Penny Lane there is a barber showing photographs, of every head he’s had the pleasure to know.
And all the people that come and go
Stop and say, “Hello”– 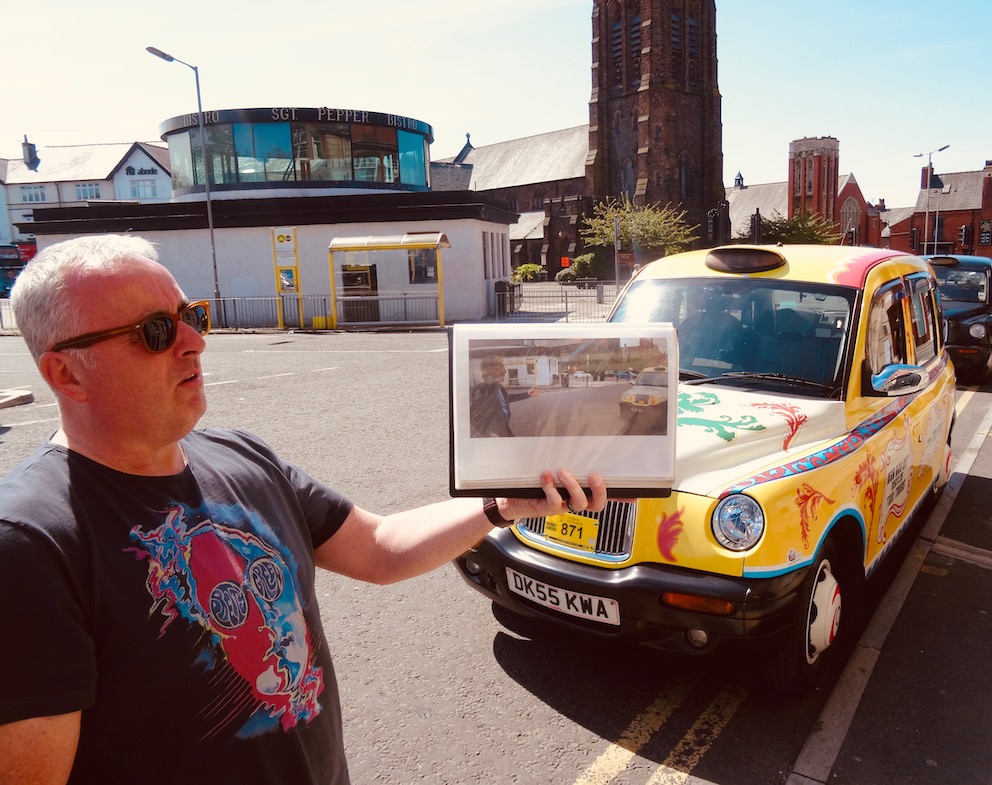 It was also on Penny Lane, right outside Tony Slavin Barber Shop, that Ian bumped into Paul McCartney on that famous Carpool Karaoke day, Paul’s very own “mad day out” if you will. And Ian was keen to show us the moment Sir Paul clocked Dear Prudence. According to Ian, he popped his head out the window and asked Macca what he thought of his car. To which Paul replied, “It’s great and a real bonus!”

To find out more about Ian Doyle and his Mad Day Out Taxi Tours, have a look at his website. We took the three hour Rickenbacker tour priced at £70 for the taxi.