May 2019. So you’re a Beatles fan coming to Liverpool with the specific intent of doing as much Beatlesy business as you can until you literally overdose on Fab Four fun? Great, so where are you gonna stay? At the world’s only Beatles inspired hotel of course, where else? When I was planning my trip to Liverpool I simply couldn’t see past The Hard Days Night Hotel, a four-star joint on North John Street, just a hop, skip and a jump from the city’s legendary Cavern Quarter.

May 2019. There’s no denying what a suitably grand looking building The Hard Days Night Hotel is, carefully converted from the city’s Grade II listed Central Buildings, which date back to 1884. Its classical design features handsome marble columns and sculptures of all four Beatles spread out across the facade. This beardy fella is, I think, supposed to be George. 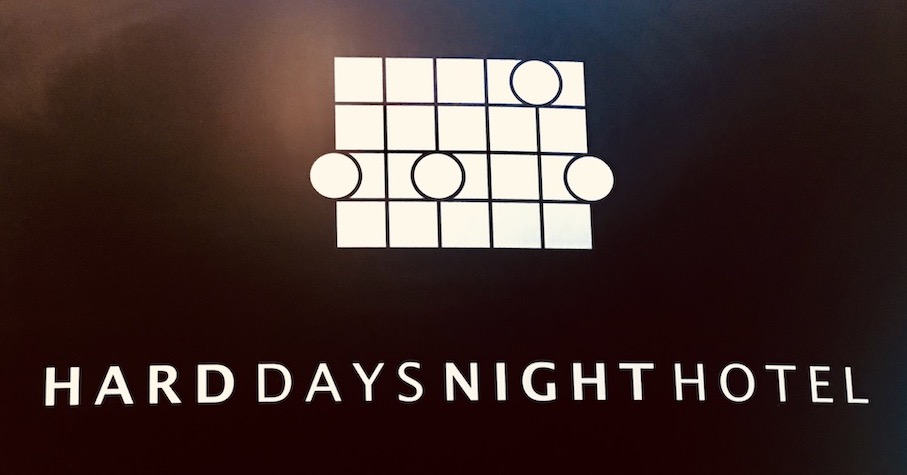 Wondering about the hotel’s curious logo? Cleverly, it represents the famous opening chord of the 1964 track the hotel takes its name from. Few chords in the history of rock ‘n’ roll are as instantly recognisable as the twang that rolls through the open strings of George Harrison’s Rickenbacker at the beginning of Hard Days Night. The dots in the logo show where a guitarist’s fingers should be to recreate his famous G7 suspended chord. I liked this place already!

May 2019. When Steppers and I trotted up the steps of The Hard Days Night Hotel with our baggage, our initial impressions were good. From the moment you walk into the grand foyer you’re hit with The Beatles vibe and for the most part it’s clear that they’ve succeeded in keeping things stylish rather than kitsch. And happily there was no messing around at reception, with its leather chairs, painting of John Lennon and hanging Beatles music sheets. Swiftly checked in, we headed straight for our double suite on the second floor.

May 2019. Wherever you find yourself in The Hard Days Night Hotel you can of course take the elevator to traverse the floors. But its way more fun to slowly stroll up the winding carpeted staircase with its giant archive photographs. Each connecting passage showcases photos from a different Beatles era.

May 2019. My travel mate Steppers and I were allocated Room 209 for our stay. Each suite comes with a unique painting on the back wall, along with the story behind it. Room 209 features Ringo Starr and his temporary replacement, Jimmy Nicol, who filled in as drummer for part of the band’s 1964 world tour after Ringo was hospitalized with acute tonsillitis and pharyngitis.

It was producer George Martin who brought Jimmy in and, after a two-hour audition at Abbey Road, he was told to pack his bags and get ready to fly to Denmark with John, Paul and George. Jimmy ended up drumming for the guys in Denmark, Holland and the frenetic Sydney and Adelaide gigs in Australia before a recuperated Ringo finally caught up with the group and took over. 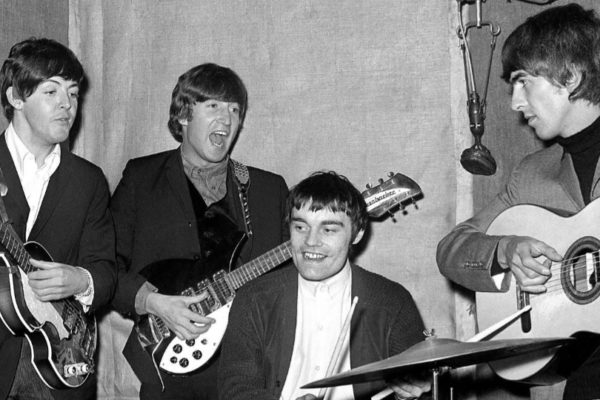 Jimmy Nicol was paid £500 for his work and his catchphrase “It’s getting better!” inspired Paul to write the song Getting Better, featured on Sgt. Pepper’s Lonely Hearts Club Band. To Jimmy’s enormous credit, he never sought to prosper from his time with the Beatles and returned to life as a session musician before settling down as a painter and decorator.

May 2019. Keen to explore The Hard Days Night Hotel, I soon left the room to see what I could find. A natural starting point is the main lounge and bar across from reception. An unapologetic 1960s vibe prevails throughout with plenty to investigate, including framed photographs, a John Lennon sculpture and all manner of Beatles artwork from both local artists and pop art titans such as Klaus Voorman, who designed the album cover for Revolver.

If you’re lucky you can settle down at one of several themed booths running across the back of the lounge. Pictured above is the excellent Astrid Booth, featuring the iconic photographs of Astrid Kirchherr during the Beatles’ early Hamburg days.

Take the staircase running down from the lounge and you’ll find a permanent photo exhibition called The Music Was The Thing by Zara Jones. Basically Jones interviewed a whole host of famous people over a ten year period, asking them to name and be photographed with a Beatles record of their choice.

I can’t imagine many fans, famous or not, would have chosen Yellow Submarine as their Beatles record. And yet that’s exactly what Liverpool Football Club legend Kenny Dalglish did!

May 2019. I could have spent longer exploring but it was dinner time and our stomachs were rumbling. So we made our way to Hard Days Night Hotel’s restaurant for dinner, which was included in the cost of our 2-night package.

As with the rest of Hard Days Night Hotel, Blakes Restaurant is beautifully designed with lots of Beatles artwork and a rolling playlist of tunes on the sound system from across their discography.

You can’t miss the centrepiece of Blakes Restaurant, a giant 60-panel wall dedicated to the iconic people who made it onto the Sgt. Pepper’s album cover. It was Blake himself who came up with the idea of a collage of figures who had most inspired the band. Apparently Lennon and McCartney went crazy for the project, competing with each other to get as many of their choices on as they could. Naturally all the Indian figures came from Harrison, while a somewhat noncommittal Ringo said he was happy to simply “go with the flow”.

So how about the food? Well, our dinner that night was a three-course affair and in all honesty we were a little underwhelmed. For my starter I went for the pan fried scallops with pea puree and black pudding (quite bland), for the main I had the marinated lamb shank with creamed potato and red wine sauce (decent, but I may have felt aggrieved had I walked in off the street and paid £20) and finally a very average sticky toffee pudding for dessert. What was a resounding success however was the hotel’s signature Strawberry Field cocktail, another complimentary offering with our package. Normally priced at £7.65, it’s an absolutely delicious concoction of strawberry puree and fresh lemon shaken with Zubrowska Bison Grass Vodka, finished with a twist of black pepper.

The Strawberry Field Cocktail had given me a taste for more, so Steppers and I took the opportunity to see what other cocktaily delights The Hard Days Night Hotel had up their sleeve. So we paid a visit to Bar Four, a contemporary bar located at the back of the main lounge. Bar Four features some original Beatles artwork by artist Paul Ygartua, who attended Liverpool Art College at the same time as John Lennon. This time I went for a Beatles Bakewell cocktail, a mix of amaretto, cherry brandy and cranberry juice. Priced at £9.65.

Overall I would definitely recommend Hard Days Night Hotel. Our stay wasn’t perfect as a) we weren’t bowled over by dinner and b) we were without hot water for 24 hours of our 48 hour stay. Not what you expect from a four star hotel! But to be fair to the staff they were very apologetic and did their best to placate us with a £40 discount and a couple of free beers. I’m equally pleased to report that their excellent breakfast buffet made up for our average dinner experience. All in all Steppers and I paid £240 for the 2-night package inclusive of the room, breakfast, dinner and complimentary cocktails. Obviously, with the £40 discount applied that ended up as £200, which I think is pretty damn good.

For more information on Hard Days Night Hotel, take a look at their website, which features a whole range of packages.