Most football fans coming to the English capital for live matches focus on sexy Premier league clubs like Arsenal, Tottenham, West Ham, Crystal Palace and… I say through gritted teeth… Chelsea. Sure, for the most part you’ll be watching football of the highest quality played by some of the world’s most recognisable stars, but you’ll also have to pay through your nose for it. Looking for a cheaper option? Want to have a more local, community-driven experience? Interested in visiting a stadium where you can sit right on the edge of the pitch and have the seat in front of you digging into your knees? You do!? Then look no further than the wonderful Queens Park Rangers Football Club in London’s White City district. 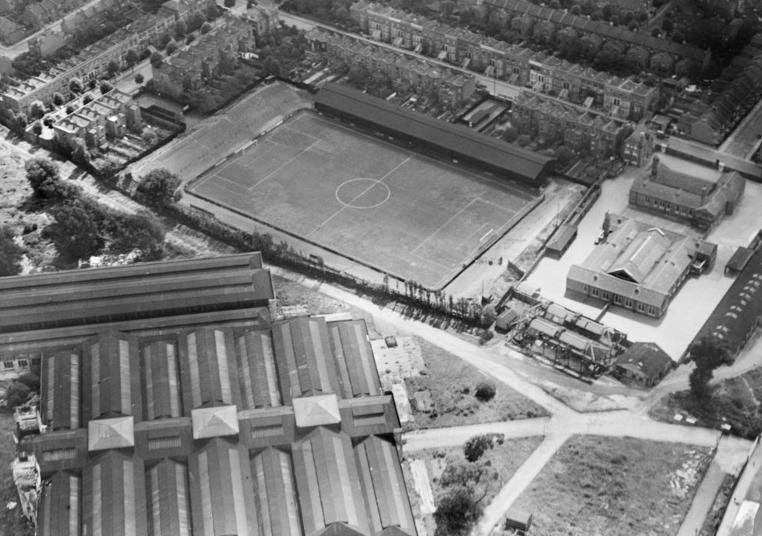 Queens Park Rangers Football Club was founded in 1886 following the merger of two teams, Christchurch Rangers and St. Jude’s Institute. The club didn’t actually move to its current home, The Kiyan Prince Foundation Stadium (known until June 2019 as Loftus Road), until 1917. The move was an enforced one as QPR were basically kicked out of their old ground at Park Royal by The Army! And this is where Queens Park Rangers have remained (bar a couple of temporary moves) for the last 102 years.

My first QPR home match was on December the 7th 1985 when my dad took me to see the mighty R’s take on West Ham United. I was seven years old at the time so I don’t remember much, though the history books tell me we lost 1-0. In any case I was hooked and over the years I’ve seen some legendary QPR performances here, including a rampant 6-0 win over Chelsea in March 1986 and a similarly joyous 6-0 demolition of Crystal Palace in May 1999. Somehow the earliest photo I have of myself at Loftus Road was the above shot taken in March 2004. We drew 1-1 with Oldham in a League 1 match that day, with QPR’s goal coming from a Kevin Gallen penalty.

Visitors to Queens Park Rangers Football Club should come nice and early to soak up the pre-match atmosphere. You’ll find both sets of supporters mingling peacefully together on South Africa Road outside the stadium and it’s not uncommon to bump into a football legend or two as they make their way on foot towards reception. I’ve bumped into several in my time, including Les Ferdinand, Rodney Marsh and Stan Bowles. Failing that, you should at least be able to meet QPR’s mascot, Jude The Cat. Jude is the patron saint of lost causes, which as any QPR fan will tell you, is very, very apt.

You might also find yourself in front of the cameras, as I was back in December 2008. ITV were interviewing supporters for their highlights show that day, so I was stopped and asked a few questions about my hopes for the season. I can’t remember exactly what I said, but it must have been more interesting than the game that followed, a drab 0-0 draw against Watford.

Another great joy of the pre-match Queens Park Rangers experience is that many of the players stop to greet fans, sign autographs and pose for photos as they arrive at the ground before kickoff. You don’t get that at Stamford Bridge! In March 2011 my brother and I were lucky enough to meet the great Adel Taarabt, easily the most talented, not to mention enigmatic player I’ve ever seen in a QPR shirt. When I look at this photo I almost want to give him a shake and tell him: “Adel, don’t throw it all away!” Not that he would have listened of course.

We also met then manager Neil Warnock that day, the architect of the best memories of my QPR-supporting life. Warnock has always been a Marmite figure in football, people either love him or hate him. But I’ll always be incredibly grateful for the manner in which he oversaw that phenomenal championship winning campaign of 2010-2011.

With the famous Sombrero Man, August 2019.

Star players and managers aside, there are also a few celebrity Queens Park Rangers fans to look out for, such as Sombrero Man, AKA QPR Mexican, also known simply as Grandad. This guy has been lighting up QPR games for years with his broad smile and maracas-shaking antics. I have a clear memory of a long ago match against Grimsby when he was dancing in the stand and getting a venomous reception from the away fans, who were singing “You’re going back to your bedsit!!!” But Grandad just kept on dancing and smiling, while the QPR fans backed him up with a retaliatory chant at Grimsby: “Your’e s***, and you stink of fish!”

Any visit to Queens Park Rangers should involve at least a glance at the amusingly named Superstore. In reality it’s a small and somewhat poky shop but hey, the place is full of various incarnations of one of the greatest football shirts in world football! Am I being hopelessly biased? Probably, but in my eyes QPR’s blue and white hoops are just gorgeous, especially the retro version pictured above.

The QPR Superstore is absolutely rammed with customers on match days, so either get here early to avoid those crazy queues, or come midweek when the place is virtually empty. For more info, take a look through the official page.

Dave Thomas, founder of A Kick Up The Rs Fanzine at Loftus Road.

If you want to commemorate your Queens Park Rangers visit with some pre/post match reading, I’d highly recommend picking up the latest copy of A Kick Up The Rs, “an independent view of Queens Park Rangers”. This, rather than the official match day program, is where you’ll get unfiltered fan views full of blood, sweat, tears and just about any other bodily fluid you can think of. While I’m not a subscriber anymore due to my unpredictable nomadic nature, back in the day Dave used to send these fanzines to me all over the world, with the latest issue arriving on my doorstep in locations as far-flung as England, Scotland, Qatar, Slovakia and Belgium. Producing A Kick Up The Rs year in, year out on such slim profit margins (he was also making a loss for a period) is a real labour of love and I can only salute the man for his efforts. You can follow Dave and his fanzine on Twitter here.

If you really want to go all-out, you could even do a stadium tour that takes you behind-the-scenes. My brother, dad and I did this in March 2011 when we got to see the home and away dressing rooms, the press areas, the honours board and the hospitality suite. And of course we were led through the tunnel and right onto the side of the pitch.

I’ve done quite a few stadium tours across Europe and I’m invariably blown away by the amazing trophy cabinets, such as the one at Real Madrid when I toured The Santiago Bernabéu Stadium. But at Queens Park Rangers things are a little more… modest. Still, it was special to come face to face with our League Cup trophy from 1967. We beat West Bromwich Albion 3-2 in the final, which was played at Wembley Stadium in front of a crowd just under ninety eight thousand. For more information on tour times, prices and how to book, have a look through qpr.co.uk.

As for the QPR match experience itself, I’ve been told by dozens of neutral football fans that Loftus Road was one of their favourite stadiums. Yes it’s small and the facilities are a bit rough around the edges, but when the crowd gets going the atmosphere can be nothing short of electric!

Being so close to the pitch has always added an extra dimension. You can often hear exactly what players are saying to each other and in turn fan encouragement is delivered right into the earhole of the wingers as they bomb down the lines preparing to whip in crosses. It’s a key part of the Queens Park Rangers magic.

By the same token, QPR fans can make life hell for opposition players, which always makes me think of that amazing afternoon when we beat Chelsea 1-0 in October 2011. You know it’s a truly special day when Jose Bosingwa and Didier Drogba get sent off and Shaun Wright Phillips manages to run around whilst resembling an actual footballer.

The QPR supporters that day truly were the 11th man, roaring their team on and making some Chelsea players feel like they were performing in some manner of boxing ring. I will never forget the glorious sight of John Terry trudging off dejectedly and David Luiz falling to his knees at the final whistle. Beautiful.

In August 2019 Loftus Road was officially  renamed the Kiyan Prince Foundation Stadium. Initially I was disappointed to hear that Queens Park Rangers would no longer be playing at Loftus Road, but with a little reflection I realised the club had actually done an amazing thing. Kiyan Prince was a QPR youth player described as a “prodigious talent” by his coaches. Kiyan was just fifteen years old when, on the 18th of May 2006, he was fatally stabbed by a sixteen year old. He’d been attempting to prevent another boy from being bullied before he died.

In early 2007 Kiyan’s father Mark founded The Kiyan Prince Foundation, a not-for-profit organisation dedicated to fighting knife crime and the broader issue of London youth violence. It was admittedly more than a touch emotional to be at the club on the 10th of August 2019 when, alongside Les Ferdinand, Lee Hoos and Andy Sinton, Mark Prince and his wife cut the ribbon to unveil the new stadium name. Shortly after I finished filming the above video, Mark broke down which was really heartbreaking to witness. But this kind of unity is the strength of Queens Park Rangers, an exceptional football club with an exceptional fanbase. The next time you’re in the market for a London football match, please do come and see us.

Like this? You can also check out my article on my life as a nomadic Queens Park Rangers fan.