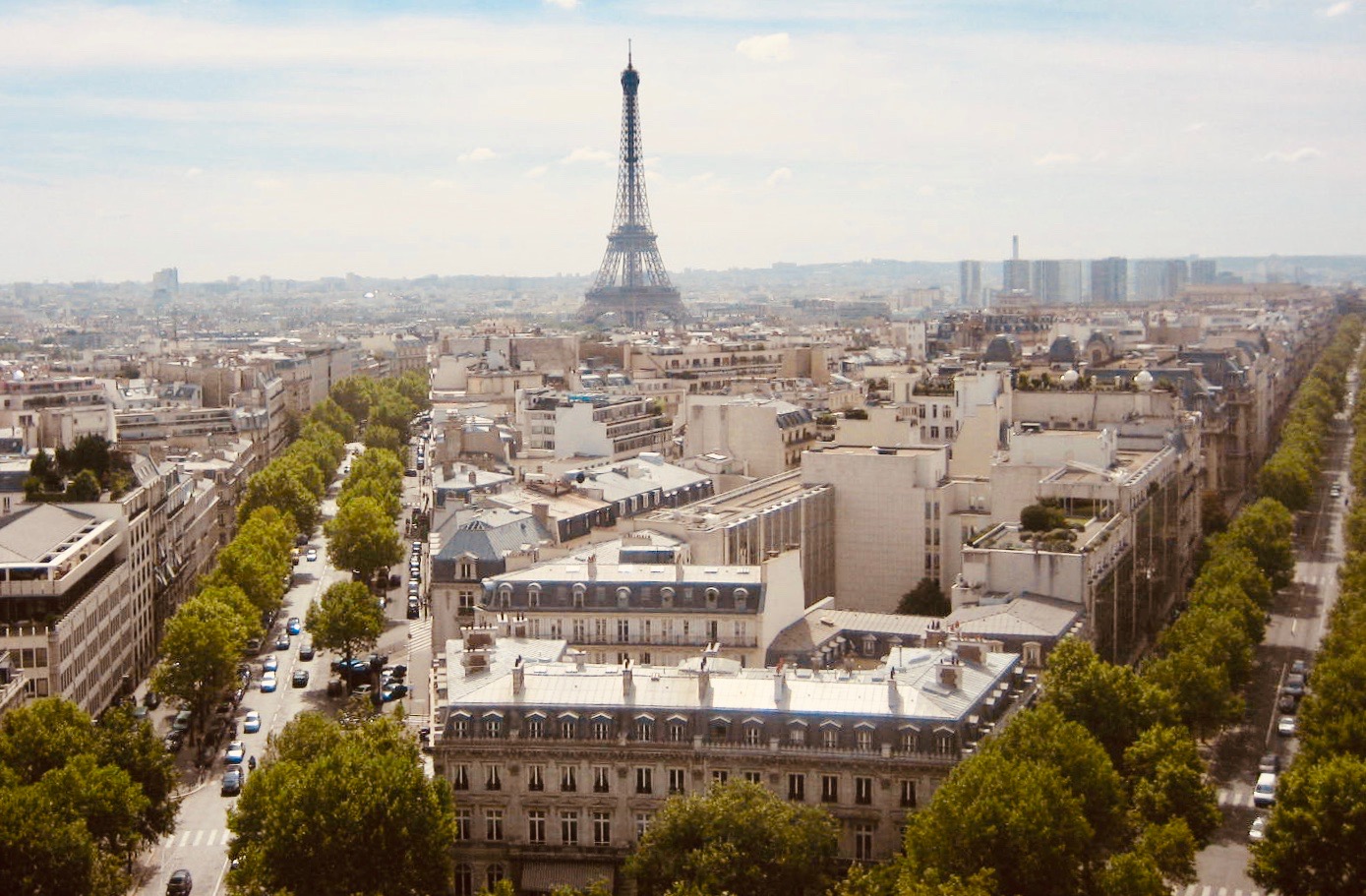 September 2006. It’s almost incomprehensible to me that my one and only visit to Paris was over thirteen years ago! In truth the French capital had never been high on my bucket list, as I’d always felt a bit indifferent about France as a travel destination. But then I found myself in an exciting new relationship and, based in the Belgian town of Leuven, it was just a speedy Eurostar train ride over to Planet Earth’s city of looove. When I look back on those old Paris photos it strikes me how disorganised I used to be with my travels. I would literally just show up and shamble around, without knowing too much about what each place truly had to offer. There was a wonderful innocence to it all of course and I have nothing but great memories of my Paris trip. The first thing we did was climb the Arc De Triomphe for sweeping views of the French capital. Soaring above everything of course was The Eiffel Tower, which I can tell you felt very exciting for 28 year old Leighton.

September 2006. Built between 1806 and 1836, the Arc De Triomphe is a neoclassical Roman style arch commissioned by Napoleon to honour those who died for France during The French Revolutionary and Napoleonic Wars. A 234-step winding staircase takes you to the monument’s summit for those cool views. Entrance tickets are a somewhat pricy €12 apiece: for the full lowdown on varying opening times, how long you might have to queue and other practical advice, take a look at the website here.

September 2006. From the Arc De Triomphe we were perfectly placed for a stroll down Paris’ world famous Avenue des Champs-Elysees, a two kilometre road packed full of historical monuments, shops, luxury boutiques, fancy restaurants and some of the city’s best nightclubs. The entire avenue is spotlessly clean and packed with outdoor seating across what feels like an infinite selection of cafes. I remember being desperate for a coffee that afternoon, so we somewhat naively settled down at a roadside table and ordered a couple of cappuccinos without even checking the menu.

September 2006. When we saw the bill I nearly fell off my chair! Expensive coffee is par for the course these days, but back then I remember feeling like asking our waiter to take them back! A bit of online research reveals that today two coffees at a standard Avenue des Champs-Elysees cafe go for somewhere between €14-16. Yikes.

September 2006. Follow Avenue des Champs-Elysees all the way down to the eighth arrondissement at its eastern end and you’ll arrive at Place de la Concorde, a giant public square that used to hold public executions. Today people flock here to see the towering Luxor Obelisk, a 23-metre, three thousand year old Egyptian needle. This incredible monument was once located right outside Egypt’s Luxor Temple, but was shipped to France in 1833 as part of a cultural exchange deal between The French government and Muhammad Ali Pasha, the ruler of Ottoman Egypt. Amazingly, all Muhammad Ali wanted in return was an antique French mechanical clock!

September 2006. Place de la Concorde is situated just across the road from Tuileries Garden, one of Paris’ most beautiful public parks. It was created by the French Queen Catherine de’ Medici in 1564 as part of the royal palace, though it was eventually unveiled as a public park after The French Revolution.

September 2006. Head to the eastern part of Tuileries Garden to see the renowned Grand Bassin water feature with its jet stream fountain. On sunny days the Bassin is lined with garden chairs so that people can take a load off and sit by the water. Yes, that’s the Luxor Obelisk you can see in the background.

September 2006. It was also in Tuileries Garden that we came across this local painter sat peacefully under a tree showcasing his work and dabbing away at his latest creation. His pieces were romantically playful and we immediately saw one that we wanted to claim as our own. I can’t remember what we paid, but it wasn’t much and the man took great care in rolling his masterpiece up and inserting it into a storage tube for me to take away. 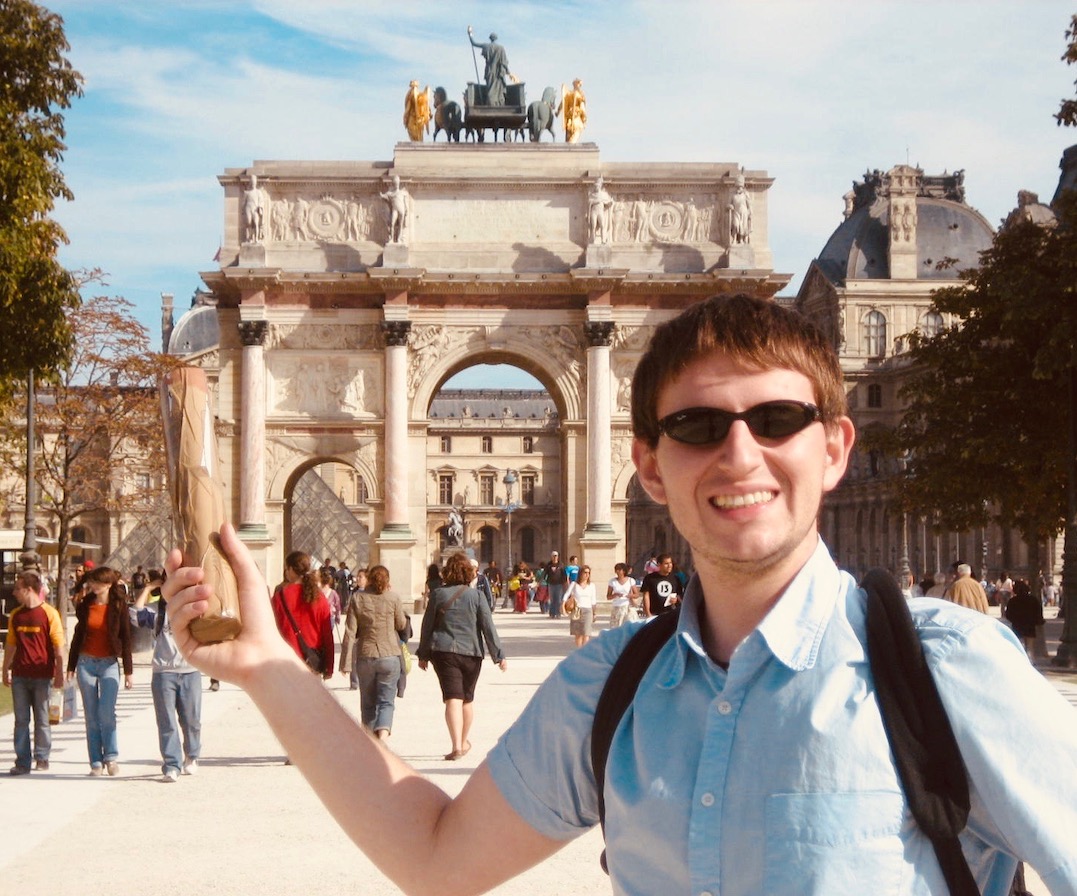 September 2006. From Tuileries Garden you can easily access The Louvre and indeed you’ll see its giant form towering above the trees long before you actually exit the park. As one of the world’s most prestigious museums The Louvre was teeming with people that day and when we arrived at the entrance there was a sign indicating waiting times of between 60-90 minutes just to get in. I remember us looking at each other and saying “nah”. 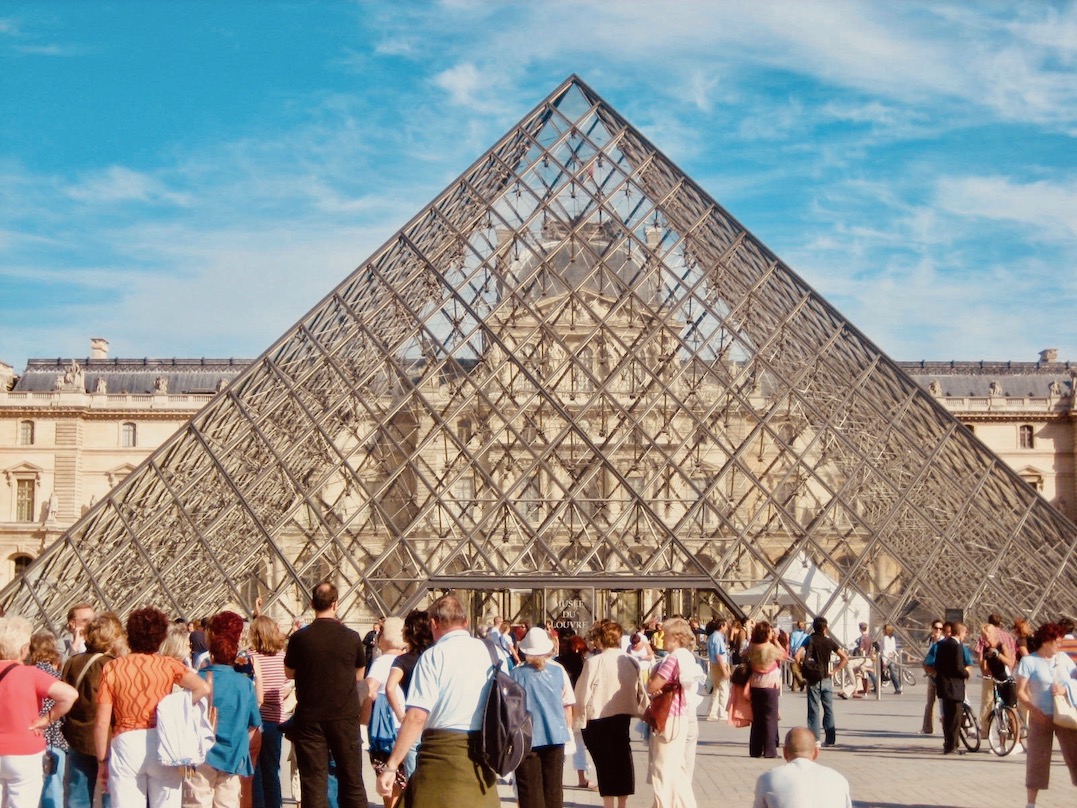 September 2006. Instead we just walked and walked and walked, stopping along the way at little spots that intrigued us. One such sight was an amazing seventy-ton abstract sculpture of a giant head resting on an equally massive sandstone hand. The sculpture is called L’Écoute and it was made by Henri de Miller. Translated into English, the sculpture is simply called Listen.

September 2006. The Listen Sculpture lies just outside the gothic St. Eustache Church. Dating back to 1532, this is one of the most visited churches in Paris and the home of several historically significant events. The Italian born French composer Jean-Baptiste Lully got married here and Mozart attended his mother’s funeral at St. Eustache in 1778. She was subsequently buried in the church cemetery. Today the church is a major music venue, with regular choirs and orchestras performing throughout the year. For more info, dive into their website here.

September 2006. But when it comes to Paris churches, nothing quite matches the sight of Notre-Dame, especially as a first time visitor. Put simply, this is one of the finest examples of Gothic architecture anywhere in the world and it has a rich history that dates back to 1160. Napoleon’s coronation took place here in 1804, Victor Hugo was greatly inspired by the church in the writing of his 1831 novel The Hunchback of Notre-Dame and numerous French presidents have had their funerals held here. The tragic fire of April 2019 has greatly affected the way in which Notre-Dame can now be visited, so be sure to check their website for the full lowdown.

September 2006. On day two we spent a good chunk of time exploring the Centre Pompidou, a dizzying complex of art exhibitions, museums, cinemas and a gargantuan public library. I remember gazing at its bizarre exterior for a bit before going in, unsure if I liked it or not. Its design was deliberately provocative in that all of the building’s functional components (plumbing, electrics, air circulation, wires, pipes and escalators) are shown on the outside. Centre Pompidou was opened in 1977 and named after French President George Pompidou, who had dreamed up the concept of a massive cultural hub right in the heart of Paris. To find out more and see what the latest events are, check in with the official website. 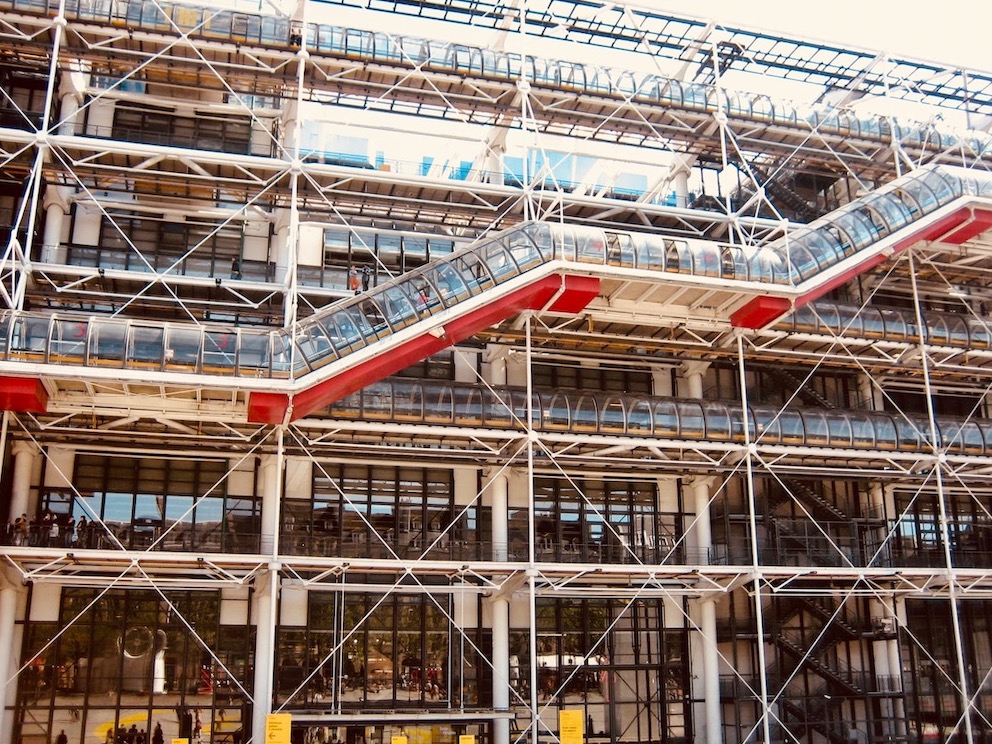 September 2006. With the clock running down on our Paris adventure, we figured it wise to head over to The Eiffel Tower and do what had to be done before dinner. As a tourist experience it wasn’t pleasant at all, with huge crowds and armed guards scowling at people from the queues that formed around the base. But still there was no doubting how impressive the structure is, especially from up close.

September 2006. It took us about fifteen minutes to walk up to The Eiffel Tower’s second floor and, in case you’re wondering, that’s 674 steps! To get to the top floor you’ll need to jump in the lift. For all the info on how to tackle The Eiffel Tower and the costs involved, consult the official website.

September 2006. Our final Paris evening was spent in The Latin Quarter, a lively neighbourhood of cobblestone streets packed with studenty cafes, trendy bars and super romantic restaurants with leafy, atmospheric gardens. It’s also home to Sorbonne University, which dates back to 1257 and, according to some historians, is “the world’s first university!” As the legend goes, those original scholars would roam the nearby streets speaking Latin as they searched out local watering holes, hence the neighbourhood’s name. When we arrived that night the place was positively joyous, with a live band belting out Spanish rock from a  hole-in-the-wall bar. 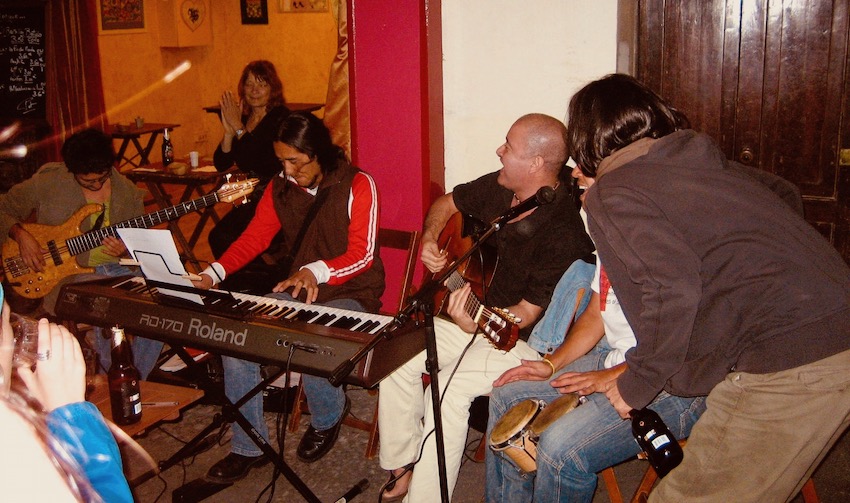 September 2006. Quite a crowd had gathered in The Latin Quarter that night, with dozens of couples dancing wildly in the street. I remember feeling how I’d underestimated Paris a little and that even with my lackadaisical approach to taking in the city sights we’d nevertheless managed to have a great time! 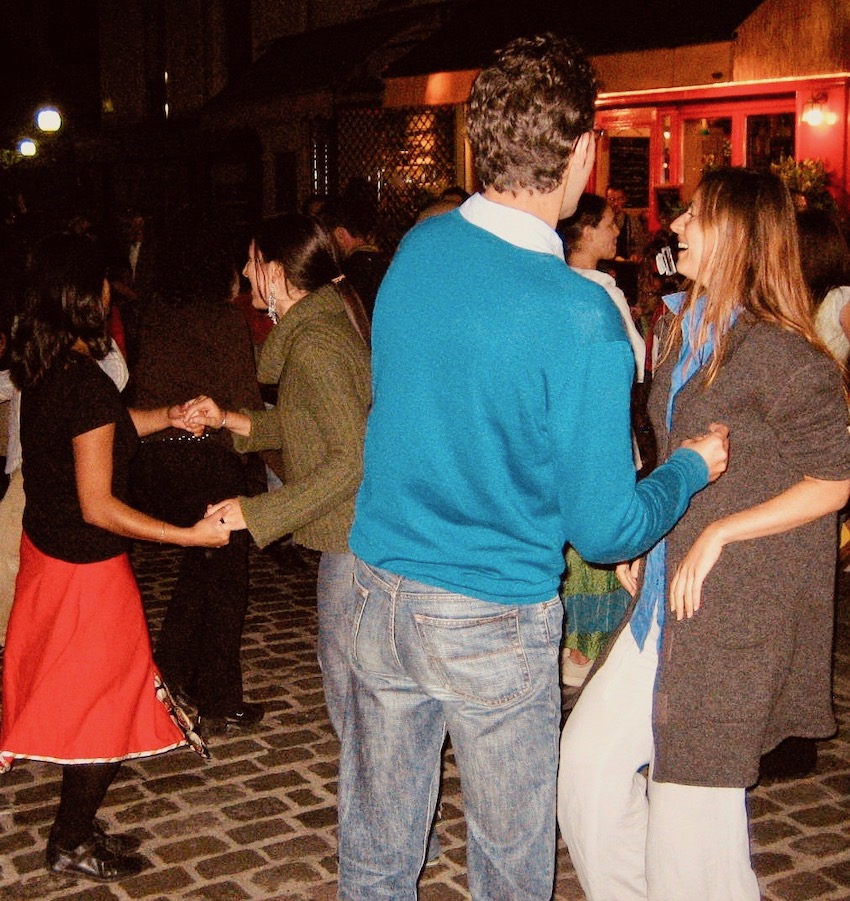 Like this? Read more from my adventures in France.

For more on this region of Europe, check out travel reports on Belgium, The Netherlands and Luxembourg.