March 2017. Even with a solid twenty years of global travel under my belt, I can honestly say that my weekend visit to Gibraltar ranks among one of the weirdest trips of my life. Naturally I was curious to check out this unique overseas territory and sample its Britain-in-the-sun tagline for myself. Even the process of simply getting here turned out to be bizarre. After a bus trip from Malaga to the sleepy Spanish town of La Línea de la Concepción, I went through the British-Spanish passport control centre (where nobody was on hand to check my passport) and headed towards the town centre via Winston Churchill Avenue. The journey took just under twenty minutes and I had to pass right through the airport runway! Eventually I arrived at Grand Casemates Square, home to a range of al fresco restaurants, cafes and pubs. Dating back to 1817, the square takes its name from the network of bombproof military barracks that line its northern end.

March 2017. By this point I was keen to grab some breakfast and luckily Casemates Square was just the place! So I headed for The Lord Nelson Pub, designed in tribute to the great admiral and his ship, HMS Victory. Opened in 2001, the interior is packed with old black and white photographs and references to The Battle of Trafalgar.

March 2017. Lord Nelson Pub advertises itself as the place to be in Gibraltar for live music and televised sporting events. There’s nearly always something going on here, from Thursday night jam sessions and Friday night bands to Saturday night karaoke. While I can’t personally vouch for any of that, I can give a solid thumbs up for their English breakfast, which set me up perfectly for the day’s exploring. For more on Lord Nelson Pub, tap into their website here.

March 2017. After breakfast I decided to head into Gibraltar Crystal, a handmade glassware museum-factory where there are glass-blowing displays and of course a sizeable shop designed to extract wallets from back pockets. It was well worth a ten-minute wander, even though I had zero intention of buying anything. During the writing of this article I’ve discovered that this Gibraltar institution sadly closed its doors in September 2019 and, depressingly, will be replaced by a branch of the Hong-Kong based digital bank, Xapo.

March 2017. While you’re on Casemates Square, keep your eyes open for soldiers of The Royal Gibraltar Regiment, a unit of The British Army. Formed in 1958, the regiment recruits from The UK, Republic of Ireland and the Commonwealth and has its base at Devil’s Tower Camp, a garrison southeast of the airport. As for the guy pictured above, I have no idea if he was ex-army, or just sporting the uniform for fun, maybe even as a promotional thing. Right enough you can buy replica uniforms, along with toy rifles, fridge magnets and other kitschy stuff from souvenir stores around town.

March 2017. Gibraltar’s bustling Main Street runs off Casemates Square. It has a trading history stretching back to the 14th century, while today the duty free shops here offer up some of the best value-for-money shopping in the entire Mediterranean. History buffs will be excited to note that Main Street was the scene of a bloody rampage during The Great Siege of Gibraltar (1779-1783). Apparently the entire road was all but destroyed by the attack from Spanish and French forces.

March 2017. As an Englishman who’d been living in Spain for a year, it was truly surreal for me to walk down Main Street passing bobbies on the beat and red telephone boxes. It’s Britain Jim, but not as we know it.

March 2017. You’ll also find some of the major British stores on Main Street, such as Marks & Spencer, Next, Mothercare and WHSmith. Keep an eye open for Bubbles Newsagents and its wide range of newspapers, chocolate bars and dirt cheap beers, wines and spirits. They even sell sticks of traditional rock! (For American readers this is a type of sugar candy). I popped in simply to grab a Double Decker! 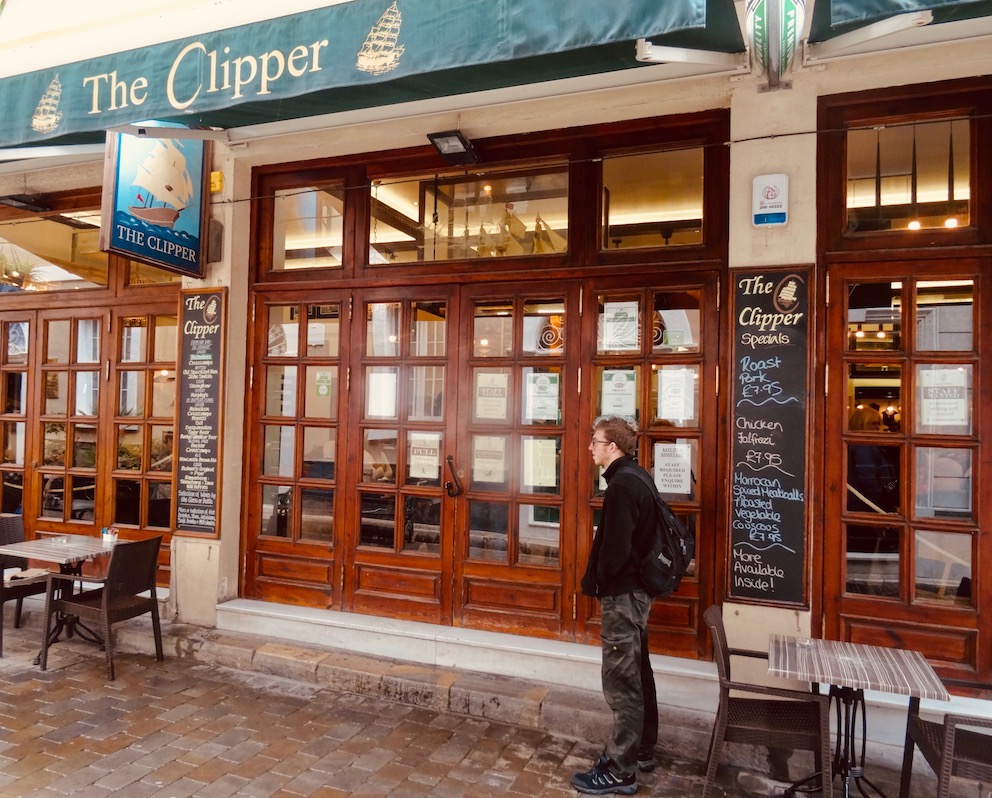 March 2017. There are a decent number of pubs in and around Main Street. Look out for Star Bar, (Gibraltar’s oldest drinking den), where legend has it Christopher Columbus once popped in for a drink. Elsewhere there are a host of joints with very hit-and-miss online reviews, including The Horseshoe and The Angry Friar. I had a drink in The Clipper, located in Gibraltar’s Irish Town, a street that used to be known for its lady-of-the-night-establishments back in the 1720s. The Clipper is famed for having the best pub food in town, while the decor fuses a modern vibe with a traditional nautical theme. For more, here’s their website. 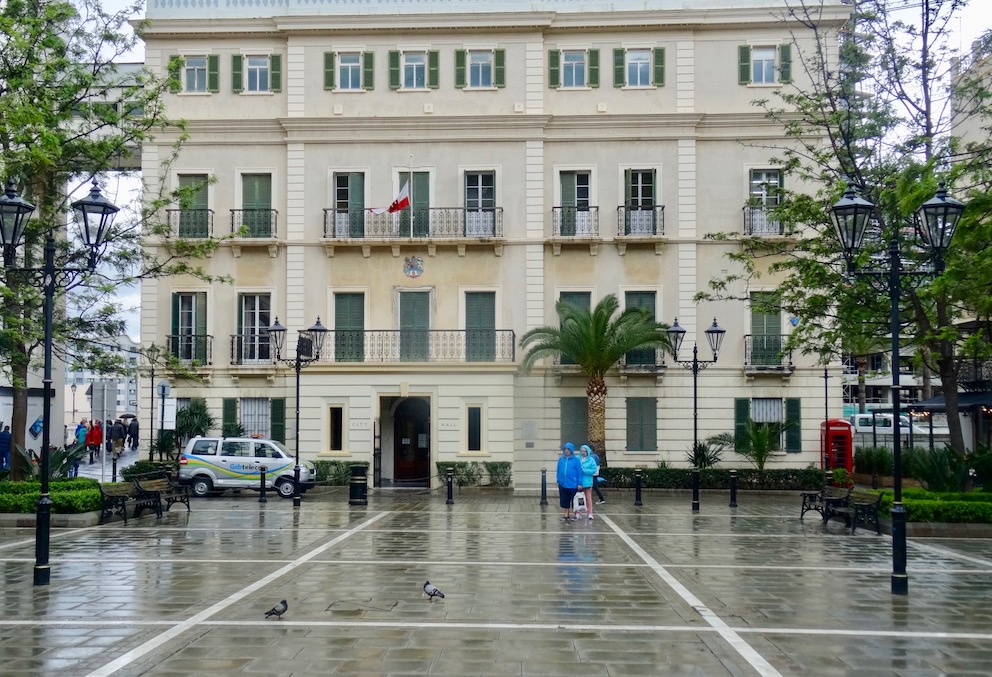 March 2017. John Mackintosh Square is dominated by the handsome City Hall, where the mayor of Gibraltar has his office. The building was constructed in 1819 as the private mansion of a wealthy businessman, Aaron Cardozo. At that time it was the largest and most luxuriant private residence in Gibraltar. Cardozo was said to be good friends with Lord Nelson!

March 2017. Speaking of Nelson, you can find a statue dedicated to the great man at Gibraltar’s South Bastion, a surviving part of the town’s old fortifications. The statue was unveiled in 2005 to celebrate the 200 year anniversary of his triumph (and death) at the Battle of Trafalgar. Amazingly, it was partly made from copper taken from Nelson’s legendary ship, HMS Victory! 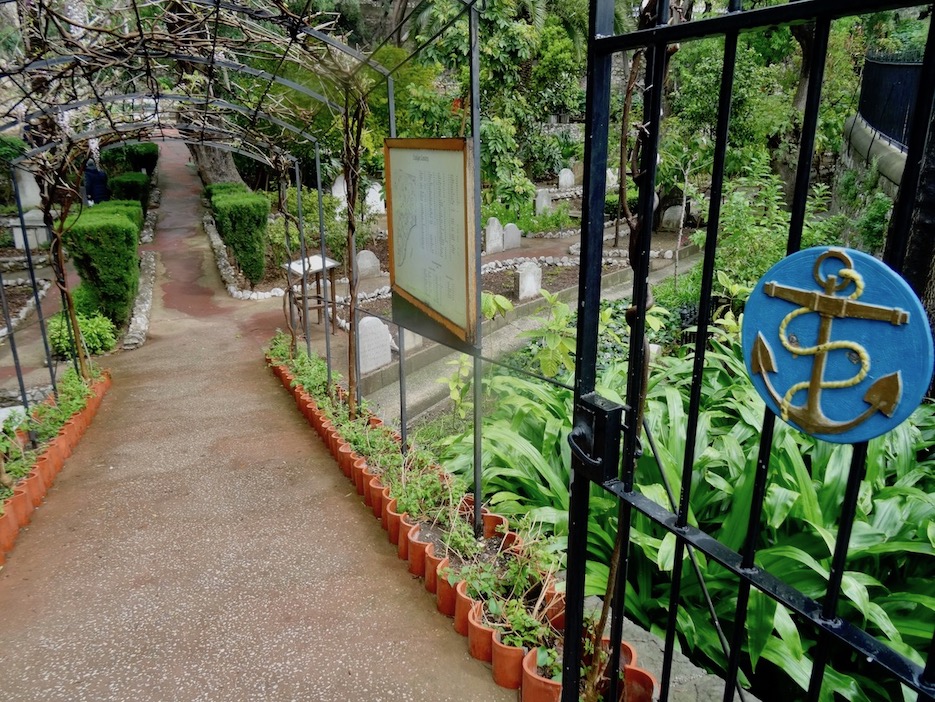 March 2017. Some of the men who fell during The Battle of Trafalgar were laid to rest here at Trafalgar Cemetery. It’s a very pretty graveyard and a much welcome respite from the relentless buzz of the town. 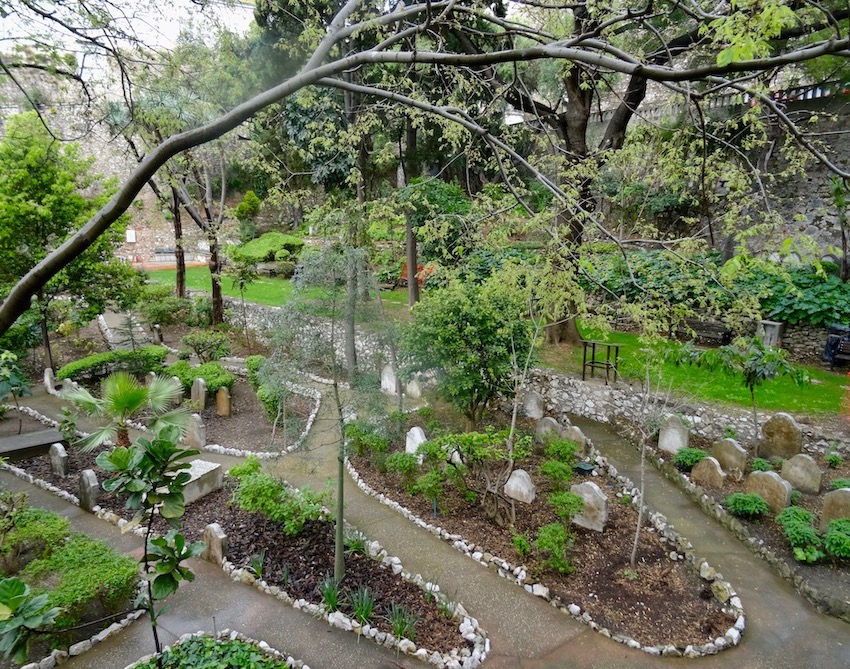 March 2017. Trafalgar Cemetery served as Gibraltar’s main graveyard until 1814, after which it fell into disrepair. Happily, the site was cleaned up and landscaped in the 1990s and today hosts a remembrance ceremony to mark Trafalgar Day every year on October the 21st.

March 2017. From the town centre there are several staircases that lead up to Gibraltar’s world famous Gibraltar Nature Reserve. If you do end up walking, why not take the atmospheric Union Jack steps on Devil’s Gap Road, especially as they’re the quickest way up! The steps were initially painted over in 1967 to celebrate Gibraltar’s first sovereignty referendum. Its latest coat was applied in 2011. 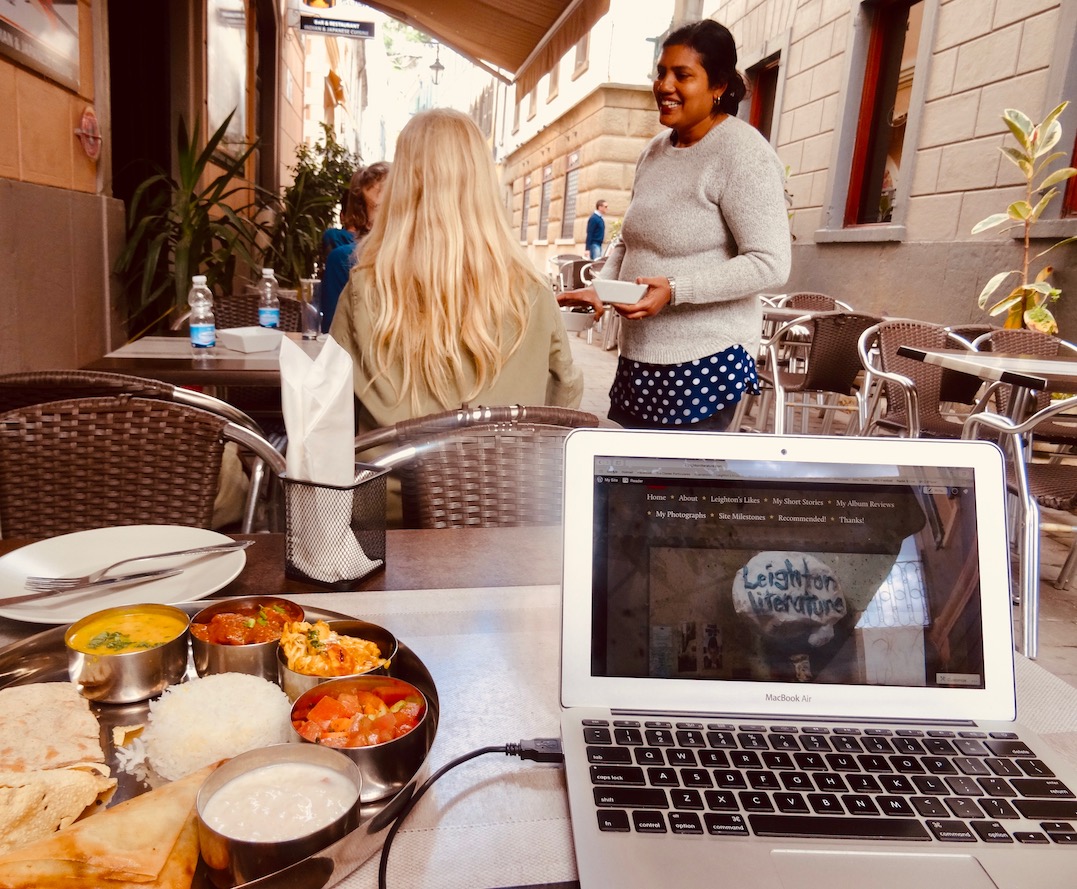 March 2017. Wherever I am in the world I tend to try and seek out an Indian restaurant because… you know… Indian food. There are a few to choose from in Gibraltar and I plumped for an early evening Thali set at Curry and Sushi on Parliament Lane. Putting the weird Indian-Japanese hybrid to one side, I can report that the food was both excellent and reasonably priced. The location is great too, tucked away in a quiet side street.

March 2017. It was early evening on my final night when I was walking down Governor’s Street with a Frenchman called Loic. We’d met hiking back down to town from The Rock and were planning to hit Lord Nelson Pub for a drink when we were suddenly stopped in the street by a trio of merry strangers. “Helloooo!” cried the man who introduced himself as Stephen Ffrench Davis, a cheerful looking fellow with a receding hairline and just a touch of aristocracy. “We’re celebrating!” he announced, his arms extending out to an accomplice on either side, “come join us! Do you like jazz?” And before I knew what the hell was going on, we were being led inside a fine looking townhouse called Governor’s Street Chambers. “I’m Tom Hillman!” garbled the silver-haired man, shaking my hand with much vigour. “I’m the WORST fucking lawyer in the world!” There followed a booming round of laughter, after which Mr. Hillman turned to his friend and said: “This is Stephen Ffrench Davis, he’s the BEST fucking lawyer in the world!!!” More laughter. The remaining man, who seemed to be the least drunk of the three, quietly introduced himself as Stephen Bullock. Pouring everyone a glass of champagne, Mr. Ffrench Davis announced that his sister had just delivered a child, so we all toasted the occasion with a hearty “cheers!!!” and a round of glass clinking. And then we just stood talking rubbish for a while, until the worst fucking lawyer in the world disappeared off to find a piano and never returned. It was a warm, wonderful and highly amusing experience that will always give Gibraltar a special place in the old memory box.

Like this? Check out my other reports on Gibraltar.