March 2004. After an intense week in India’s frenetic capital New Delhi, my travel mate Allan and I jumped on an equally hectic train to the city of Agra. Just about everything about India thus far had been nothing short of a relentless assault on the senses, including the seemingly simple process of boarding a train. Joining the chaotic throngs of people on our platform at New Delhi Railway Station, we found ourselves pushed, shoved and jostled as we literally fought to reach our pre-booked economy class seats. 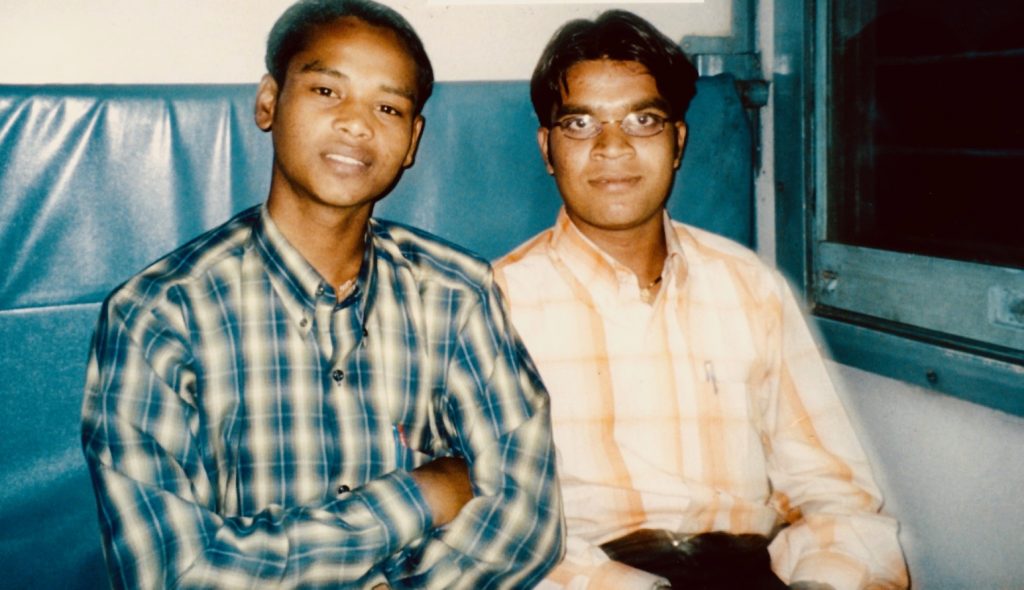 On the train from New Delhi to Agra.

March 2004. The journey from Delhi to Agra took just three hours, by far the shortest journey of my entire Indian adventure. And the trip flew by faster still when we found ourselves seated opposite two bright-eyed, bushy-tailed Indian men. “Welcome to India sir!” grinned checkered shirt boy, who told me that he and his friend were call centre operatives working in Delhi. Every weekend they took the train home to Agra for some much needed rest and family time. Bespectacled boy was a big cricket fan and insisted on hitting me with a spray of questions about a sport I knew virtually nothing about. “Sir, how rich is Ian Botham?” When we finally pulled into Agra I made sure to carry out the photographic honours, before presenting each of them with a 50p coin plucked from a little bag I’d prepared for such occasions. “Thank you, sir! God bless The Queen!” cried checkered shirt-boy, giving his gift a passionate, irony-free kiss. And off we went in our separate directions, never to meet again. 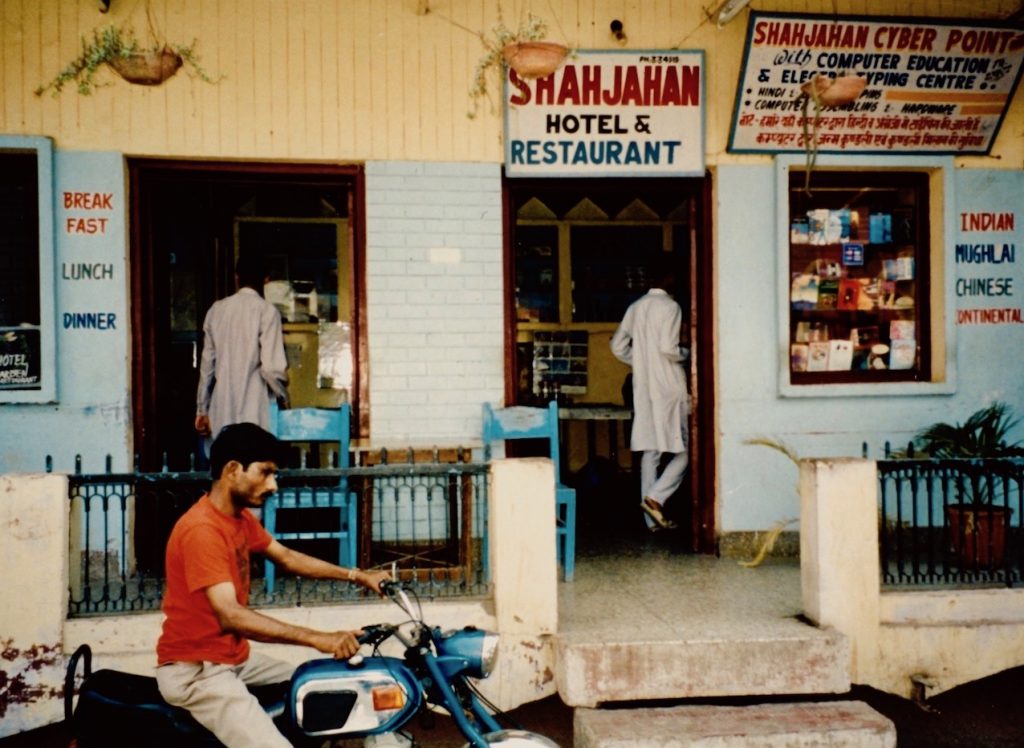 March 2004. Of all the hundreds of hotels, guesthouses, B&Bs and apartments from my world travels, very few were as memorable as Agra’s filth-ridden but highly characterful Hotel Shahjahan. Our reasons for choosing the place were straightforward: it was cheapy cheap and centrally located, just a short walk from The Taj Mahal. We hadn’t been expecting much, but nothing had prepared us for the abysmal room we were offered on arrival. Still, I have fond memories of hanging out with the hotel manager, a grisly, marijuana-fuelled philosopher by the name of Guddu. That’s him straddling the motorbike. 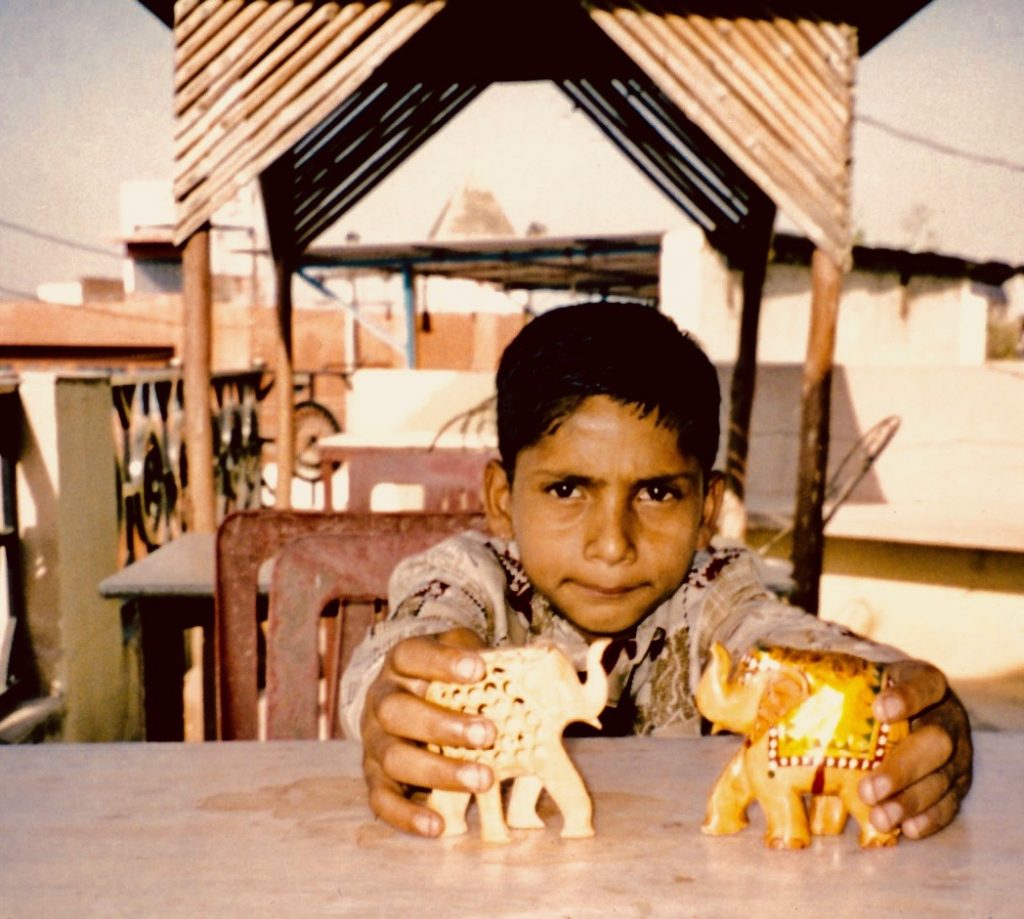 March 2004. Guddu had a large number of children born from a variety of women and one of his younger sons could usually be found on Hotel Shahjahan’s rooftop reading in the shade. One afternoon I let him play with my collection of model elephants and managed to grab this fortuitous shot in the process. During the writing of this article I was flabbergasted to learn that Hotel Shahjahan is still operating, have a look at their page on hotelsinagra.org for more info. To find out more about my stay here all those years ago, have a read of my short stories The Shithole and Same Same But Different.

With Allan at The Taj Mahal, Agra.

March 2004. It was from Hotel Shahjahan that we left at dawn for the atmospheric walk to The Taj Mahal. I remember the early morning light seeping into the quiet streets, monkeys hopping between the trees as we went. Arriving ahead of opening time, Allan and I succeeded in beating the infamous Taj queues to swiftly buy our tickets and pass straight through the security barriers. 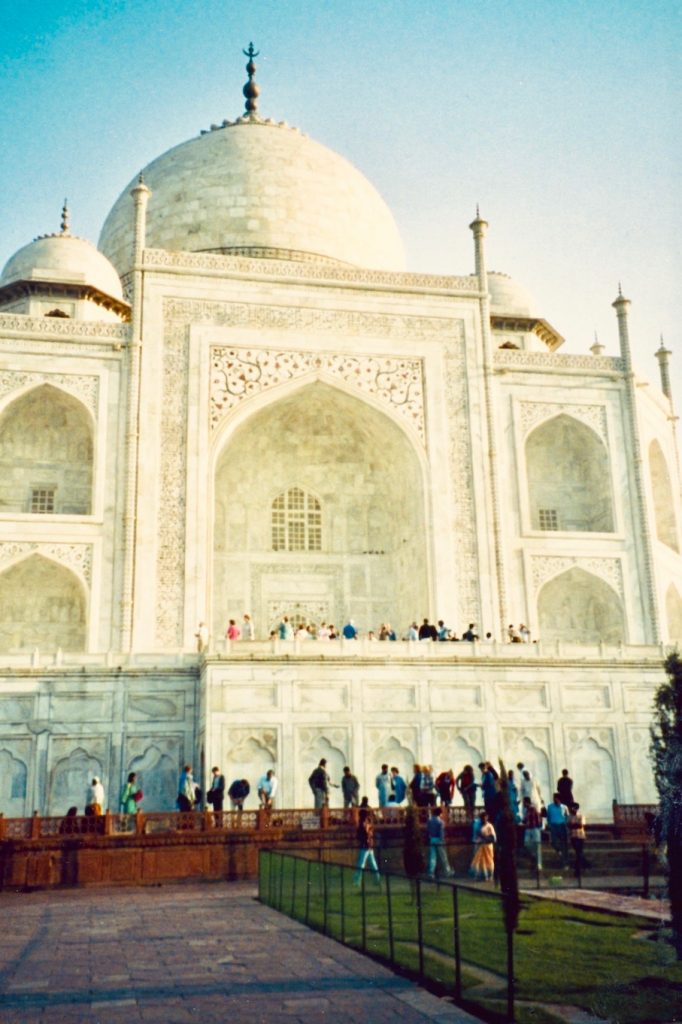 March 2004. The Taj Mahal really is as breathtaking as its reputation suggests. Construction began in 1632 upon the order of the Mughal Emperor Sha Jahan, who had been left heartbroken following the death of his favourite wife, Mumtaz Mahal. She’d died giving birth to their 14th (!) child and, as the legend goes, had begged him to honour her with the grandest mausoleum ever built. It was a promise he duly delivered, with a quite spectacular white marble building that took twenty one years to complete. When Sha Jahan himself died in 1666, he was also laid to rest in The Taj alongside Mumtaz. 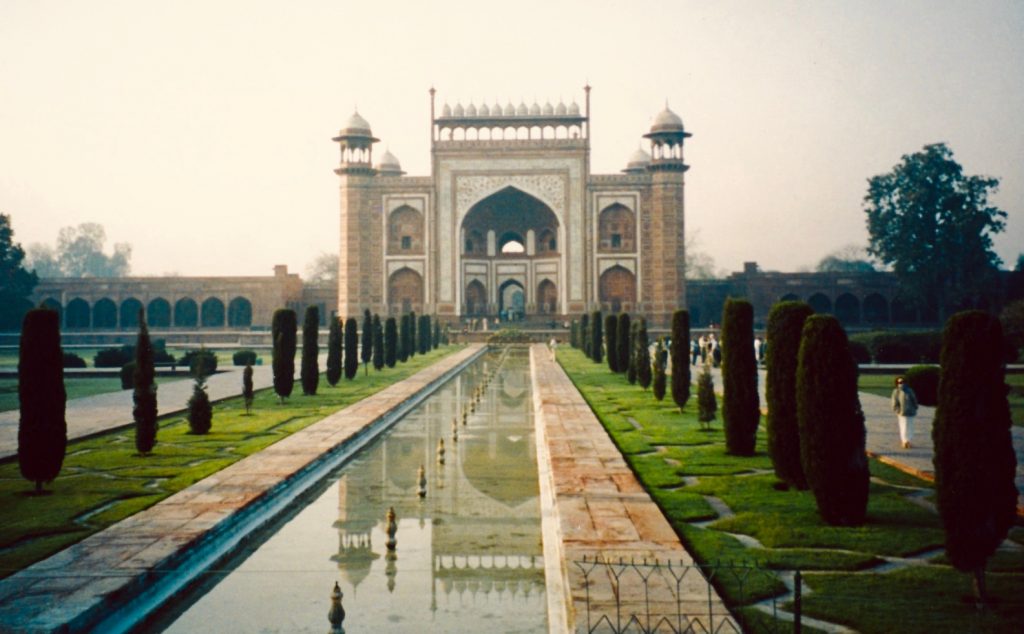 March 2004. Before heading inside, take a moment to turn and look back. The mausoleum is set in a beautifully simple Mughal Garden with a reflecting pool by which Princess Diana famously sat, a picture of loneliness during her state visit to India on the 11th of February 1992. These days a visit to The Taj is a much more expensive and complicated affair than in my day. Interested in going? Take a look at these excellent tips from twowanderingsoles.com. For a deeper insight into my long ago visit, why not dive into my short story Same Same But Different. 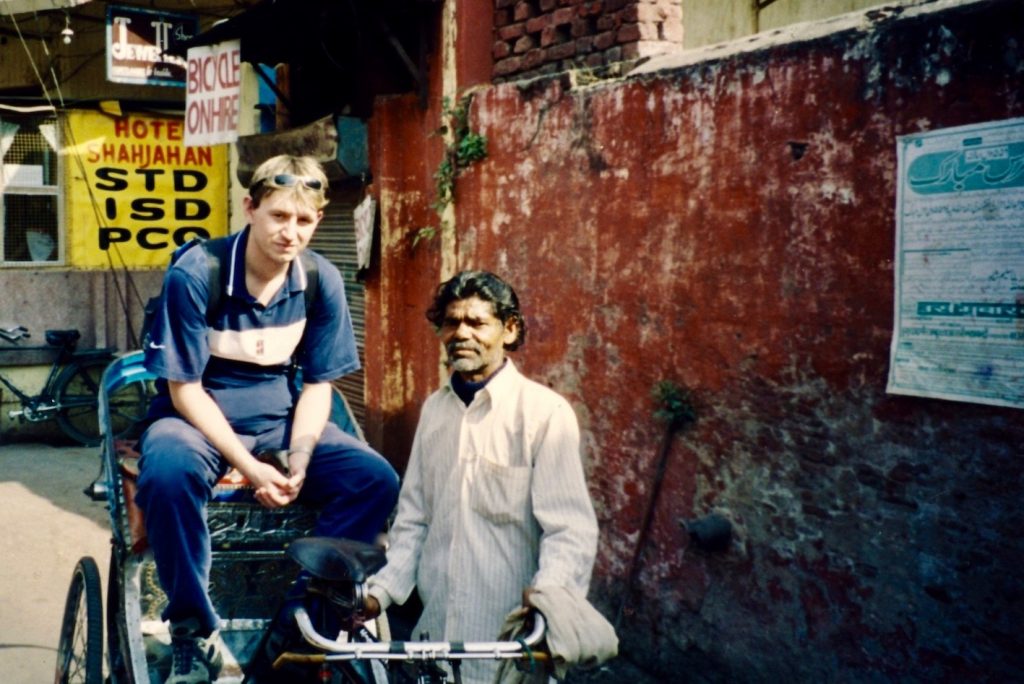 March 2004. Getting hassled by rickshaw drivers was par for the course in India. But there was something different about Mona, a softly-spoken, twinkle-eyed man who offered to ferry me about the city for a sum of money so insignificant it seemed rude not to accept. 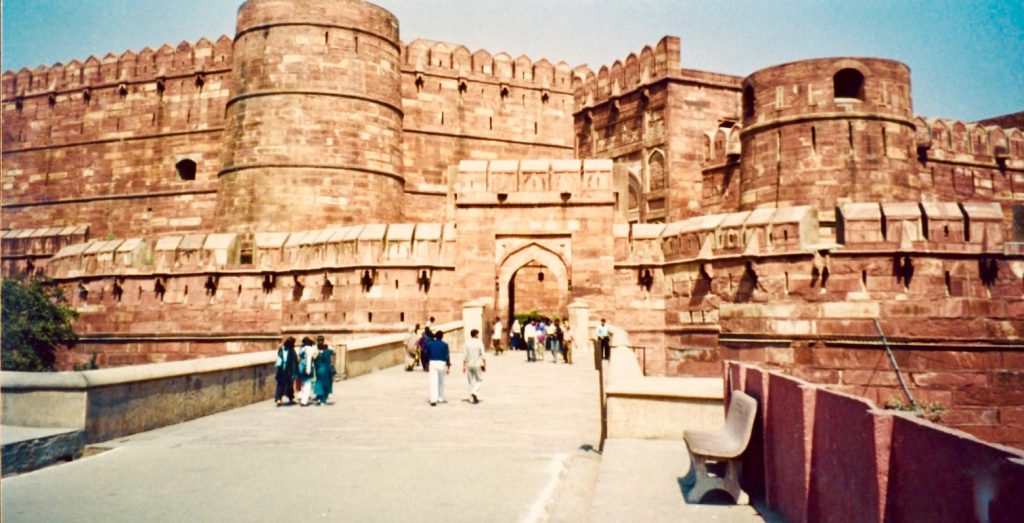 March 2004. My main stop that day was Agra Fort, one of India’s finest Mughal castles. Mona dropped me off and told me to take my time before dropping into the backseat of his cycle rickshaw for a well-earned nap. Agra Fort was built from red sandstone in 1565 by Emperor Akbar, Shah Jahan’s grandfather. The fort was unveiled as a focus point of Agra, then the capital of The Mughal Empire.

March 2004. While the fort was created primarily as a military installation, Shah Jahan later transformed it into a palace with lavish living quarters, grand mosques and vast, sweeping courtyards. Once again his favourite white marble was employed throughout.

March 2004. Agra Fort was also where Shah Jahan spent the final eight years of his life trapped in a prison cell. Tragically, it was his own son Aurangzeb who betrayed him and left him locked up to rot. Cruelly, his cell window overlooked his grand creation, The Taj Mahal. I couldn’t help but take a moment to sit there myself and try to imagine the depths of his despair. Shah Jahan died right here in the cell in 1666. To find out more about Agra Fort, including opening hours and ticket prices, take a look at the official website.

March 2004. I tried to pick up an elephant-themed souvenir in every place I visited throughout that India trip. In Agra I found just what I was looking for in this tiny, shack-like store near the train station. I was spellbound by the little marble elephant I bought from these friendly and somewhat goofy brothers. Beautifully carved and worryingly delicate, I felt sure it would break as I lugged my gear around the country and ultimately back to Scotland. But somehow it survived the trip! It was also fully intact when I moved to Leuven in Belgium, not to mention the subsequent change of residence in Brussels. Again, it emerged unscathed when the beast was later transported to The Netherlands and had not even a scratch when, some years later, I was reunited with my possessions in Spain. But then one day, at home in Malaga, my mischievous cat Bill climbed up onto the TV, jumped on my main shelf and brought the whole thing crashing down. Mr. Elephant wasn’t destroyed as such, but now has a giant hole in his side. Fucking cats.

Like this? I have more travel reports from across India, along with my short story collection Incidents in India. 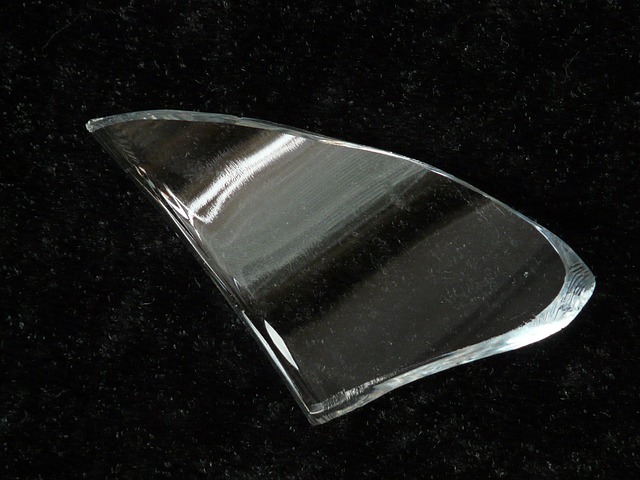