March 2004. If the urban sprawl of Jaipur had betrayed us with its misleading Pink City tagline, then we were more than compensated by the extraordinary Golden City of Jaisalmer, quite possibly my favourite post from those distant India travels. And it delivered on that aforementioned goldenness immediately on the first evening as we made our way into the city’s ancient quarter, housed in and around Jaisalmer Fort. With an ancient history dating back to 1156 AD when it was constructed by the ruler Raja Jaisal, Jaisalmer is like something out of a storybook. A fairytale city with yellow and golden sandstone walls that turn orange at dawn and dusk while the sun does its thing.

March 2004. Inside Jaisalmer Fort Allan and I set about exploring its beguiling network of narrow, twisting lanes and finely sculpted buildings known locally as havellis. Over fifteen years later, I can say with confidence that I’ve never seen anything like them since. The locals were friendly too and keen to chat with us, such as this unfathomably named duo, Romeo and Juliet. Sillier still, the serious looking dude on the right was Juliet. We did our very best to keep straight faces as this information was relayed to us.

March 2004. It was such an adventure exploring Jaisalmer’s chiselled alleyways, you never quite knew what you were going to see next. At some point we came out into a large public square where a sizeable crowd of locals were watching a cricket game on a comically small TV, perched on the ledge of a carved temple.

March 2004. They had everything we needed in Jaisalmer Fort, including shops, restaurants, internet cafes, currency exchange offices and even a couple of hairdressers. I got my hair cut in one of them, a service which came with a shave and a head massage. Upon paying the barber, I asked if I could take a photo of him and his father, a man so immobile and silent he could very well have been just another piece of furniture. “Yes, but let me wear your sunglasses” he insisted, “I will look cool”.

March 2004. What a huge surprise, not to mention an incredible treat, when I came upon Jaisalmer’s famous 8 July Restaurant, an eatery CLEARLY created in honour of my birthday. Needless to say I persuaded Allan to have dinner there and yes, the owner Mr. Bhatia was tickled to hear about the birthday connection. I even made sure to show him my passport, in case he thought I was pulling his chain. The curries and fruit smoothies we had that night were great, but secretly I was disappointed not to be offered even a rudimentary discount. From what I can see 8 July Restaurant is still going, here’s their Facebook page.

March 2004. Our Jaisalmer digs were secured at the very decent Hotel Renuka, where budget rooms had comfortable beds and the cleanest bathrooms of my entire Indian adventure. Foolishly, we declined to pay extra for air con and the fans just didn’t cut it, so we spent most of our time chilling up on the rooftop with its fantastic views over Jaisalmer’s mini-sandcastles-skyline. Hotel Renuka has gone from strength to strength in the years following my visit and it seems they’re now one of the city’s top choices for the economically-minded traveler. In fact, they now have two buildings, located just fifty metres apart. You can access their snazzy website right here. 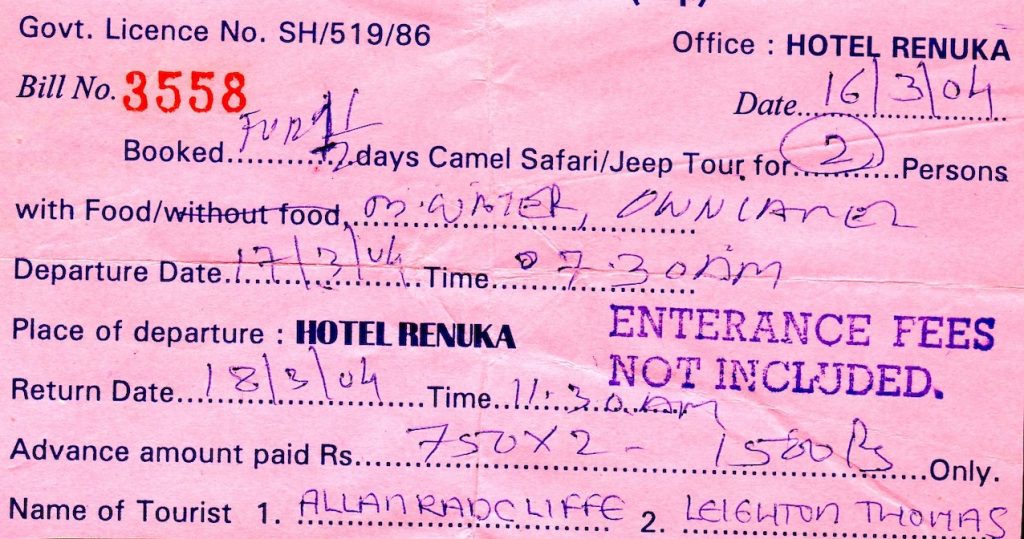 March 2004. Hotel Renuka’s main draw for us was that it was also Jaisalmer’s premier operator for Camel Safari Tours across The Thar Desert bordering Pakistan. Allan and I were super excited at the prospect of getting out into the desert, especially as the non-tourist package we signed up for included an overnight stay with a team of local guides.

With Lalou in The Thar Desert.

March 2004. Allan and I were joined by two others on the tour: a pair of chatty English girls and two silent, non-English speaking Japanese guys. The tour kicked off with a jeep transfer out into the arid plains of Jaisalmer, where we were dropped off at a meeting point and introduced to our guide, Mr. Magoo, and his merry crew. From here we were all assigned camels and mine turned out to be a powerful but volatile beast called Lalou.

March 2004. Trotting through the vast, unending Thar Desert, also known as The Great Indian Desert, is one of my most cherished travel memories of the past twenty years. Mr. Magoo was a real character, the traditional food he cooked up was delicious and we got to sleep on the desert dunes themselves under the stars by the warmth of a crackling campfire.

March 2004. By the time we were returned safely to the drop-off point the following day, our group had formed an unspoken bond and we celebrated our experience with a group photo. Hotel Renuka still does the tours, they’re just way more expensive and come in several varieties depending on one’s budget and adventurousness. You can mull over the options here.

For a more intimate look at my time in Jaisalmer and that incredible desert safari, have a read of my short story Lalou, taken from my collection Incidents in India.

For more on that magical, long ago cross-country trip, have a look at my other travel reports from around India.