January 2005. In the autumn of 2004 I found myself at a major life crossroads. Should I take a tempting job offer in the south of Italy? Or move to Belgium with my girlfriend? Naturally the girl won and I packed my bags, heading off to the land of chocolate and waffles. 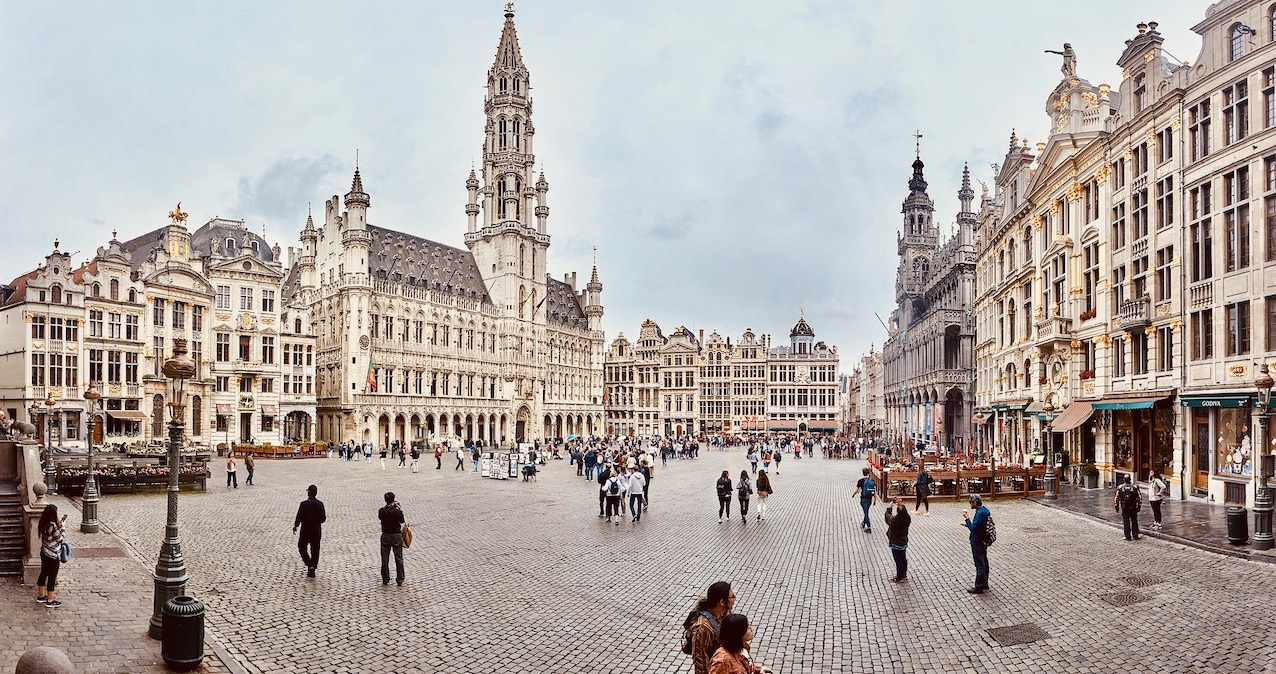 Based in the gorgeous university town of Leuven, Belgium’s capital city Brussels was just a handy thirty-minute train ride away. And while the city itself never really enchanted me, there’s no doubting the splendour of The Grand Place, Brussel’s pulsating main square.

March 2006. Leuven was such an agreeable place to live I ended up staying, which meant more trips to Brussels whenever friends visited. This above shot takes in the city’s famous food street, Rue Des Bouchers, which translates as Butcher’s Street. Dating back to The Middle Ages, butchers and sausage makers filled the road until the great plague of 1667 wiped them all out. 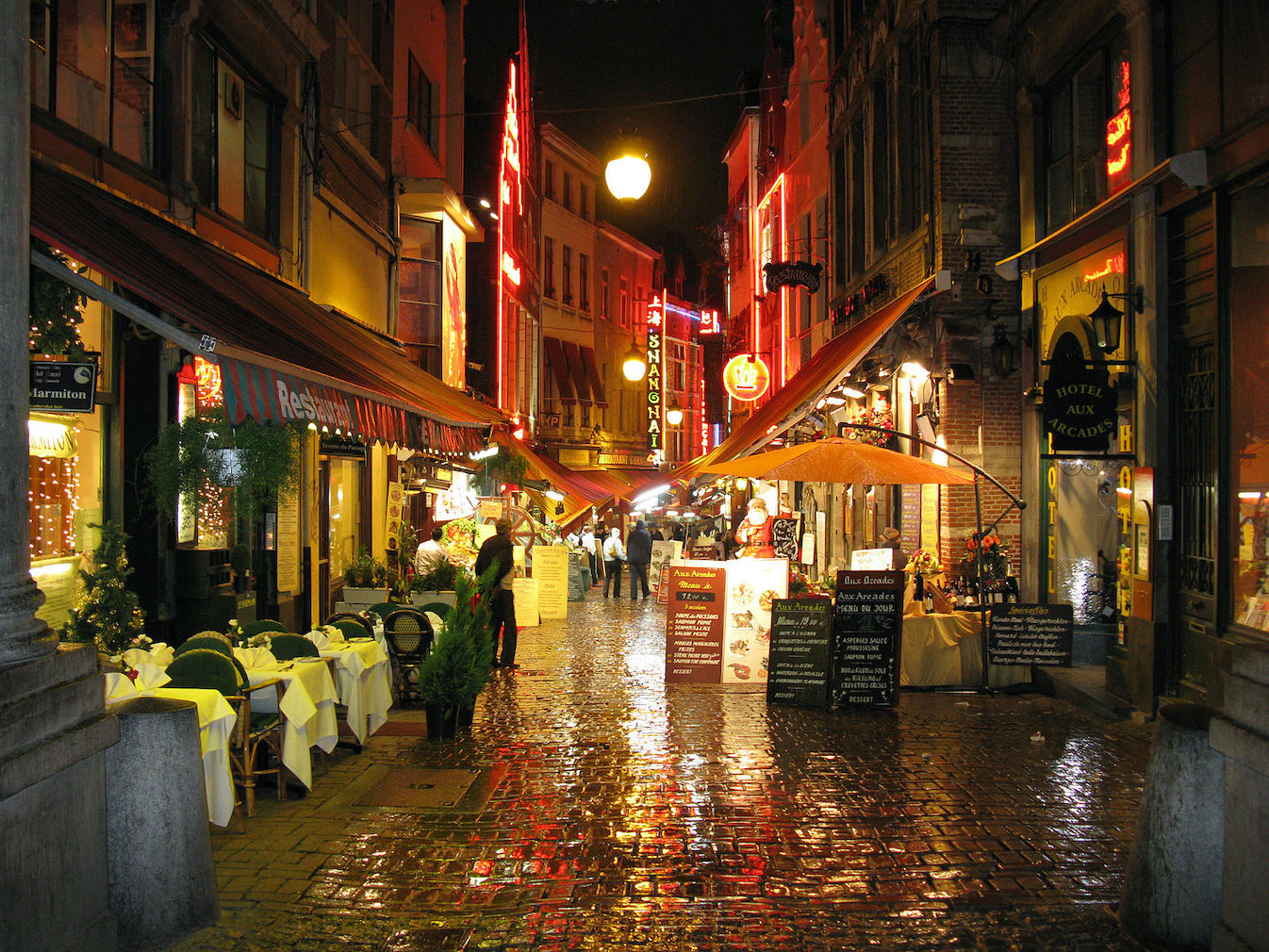 Expect overpriced dishes, indifferent service and distinctly average food. If you really want to eat here, do your research and choose wisely!

June 2006. In the summer of 2006 I paid a curious visit to Belgium’s national football arena, King Baudouin Stadium. Amazingly for me, I wasn’t going to watch football, but visiting as a plus one for Randstad Belgium’s annual company party. 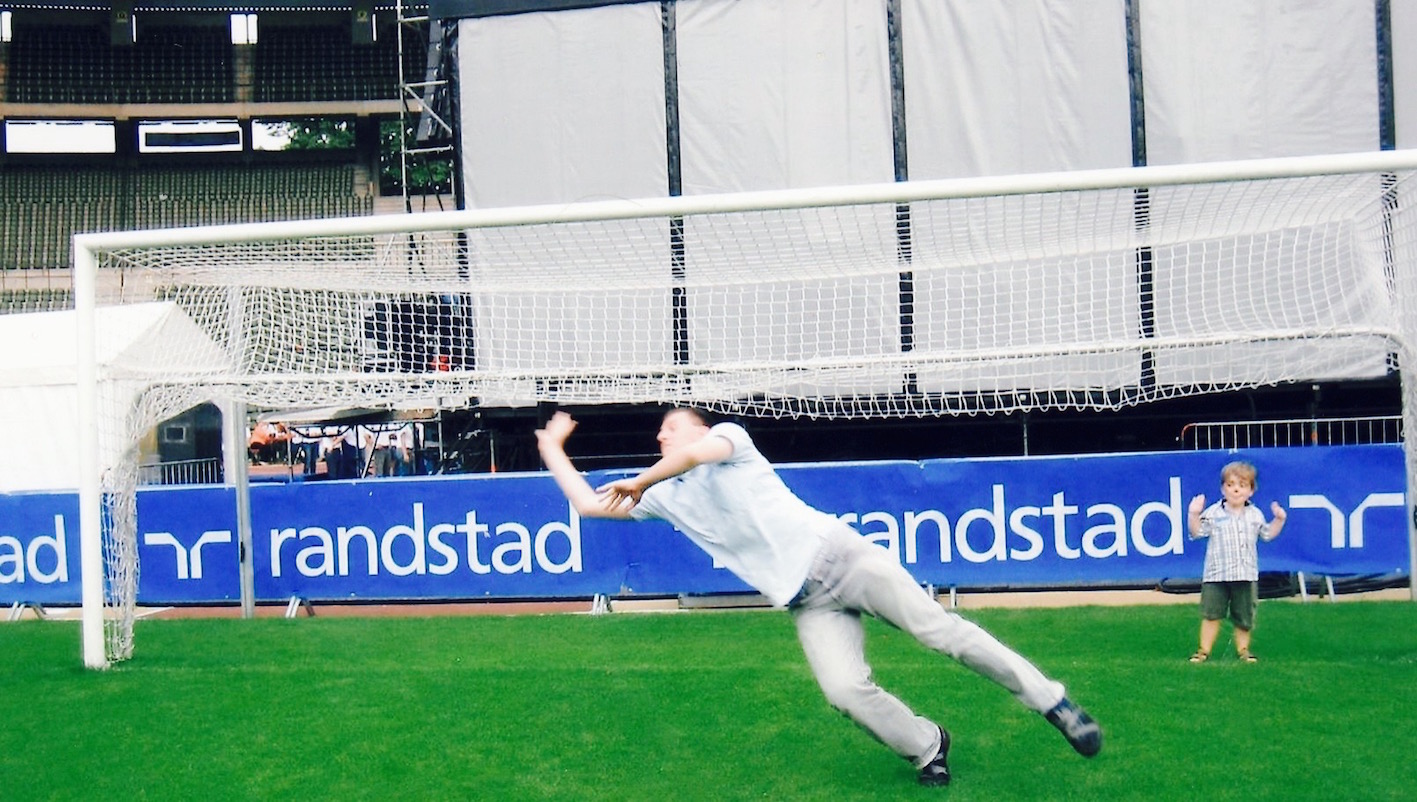 There was a celebratory atmosphere that afternoon at King Baudouin Stadium, with juggling, balloon making, bongo drums and the consumption of much Belgian beer and herring. Amazingly, security was incredibly lax and a bunch of us were able to waltz onto the pitch for a kickabout!

Even better, someone organised a penalty competition! The above photo shows me, (with the help of a little friend), on the receiving end of an appalling spot kick so horribly mishit it didn’t even make the photo.

May 2009. It was a sad day when we eventually had to leave Leuven and relocate to Brussels for professional reasons. Our local neighbourhood was Woluwe-Saint-Pierre, a leafy residential district fifteen minutes outside the centre. There isn’t much to see and do here, but it does at least have Woluwe Park, one of Brussels’ largest green spaces at 71 hectares.

April 2009. A lot of visitors to Brussels pencil in an afternoon walking around the European District taking in the impressive architecture of the various EU institutions.

That’s the The European Council Building pictured above. The structure showcases a mix of the original design’s 1920s art deco and the more modern embellishments of Philippe Samyn, with glimmering glass panels and skyways.

In early 2009 I began working as a freelance English teacher at several EU institutions, including The European Council. So this is where I would come to work twice a week!

These guys were my favourite European Council group, a beginners class that took place at an ungodly hour of the morning. Nevertheless, Lauren (France), Vito (Italy) and Manuel (Spain) always greeted me with warm smiles and gave me their best, despite having considerable difficulties with English.

They would often bring breakfast and lay out their little tubs of multicultural nibbles across the table. From the million and one classes I’ve had over the years, these guys are still top ten!

April 2009. S and I didn’t explore as much of Brussels as we should have over the course of our two years there. We were focused on work and wedding planning, so tourism took a back seat. But we did go and check out The Royal Gardens of Laeken one weekend.

Situated outside the Castle of Laeken in northern Brussels, this amazing estate was designed in the English style for King Leopold II. There are a few unexpected structures to be found in the garden, including this Japanese pagoda. Leopold himself ordered its construction, having become fascinated by Oriental architecture at the 1900 World Exhibition in Paris.

The Royal Gardens of Laeken are also famed for their tropical, sub tropical and cold greenhouses. I’ve since read that they’re usually closed to the public. So we must have visited on some kind of rare open day! To find out more, check out their online page of officialdom.

For more on my time in Belgium have a look at my article on Leuven.