October 2008. I’ve always been a huge fan of the movie Casablanca. There’s just something mesmerising about Humphrey Bogart doing his thing onscreen. It’s a film that always reminds me just how gorgeous Ingrid Bergman actually was. It also introduced me to the grossly underrated Peter Lorre and… well… the entire movie is so ridiculously quotable from start to finish. Consequently, try to imagine how excited I was at the prospect of dinner at Rick’s Cafe in Casablanca. Especially when you realise that, yes, the place was inspired by Rick’s from the movie.

It was October the 15th and S and I were on our honeymoon. We had a great trip around Morocco that month and had promised ourselves a grand, end-of-trip dinner. You know, the kind of feast where you just say “to hell with it” and celebrate in style. As soon as I heard about Rick’s I knew it had to be the place.

When we entered Rick’s Cafe that night I immediately saw they’d done a great job. It wasn’t a perfect recreation, not by any means. But it was wonderfully familiar, with its sculpted bar, white arches, towering columns, hovering second floor balconies, stencilled lighting and shadow-casting plants. It was, as they, say literally like stepping into a movie.

True to the film, Rick’s features live performances from the house pianist. However, fans may be disappointed to learn that he’s not an African American man by the name of Sam. Rather, this is Issam Chabaa, a Moroccan who’s been here since the place opened over fifteen years ago. It was restaurant owner Kathy Kriger who hired him. 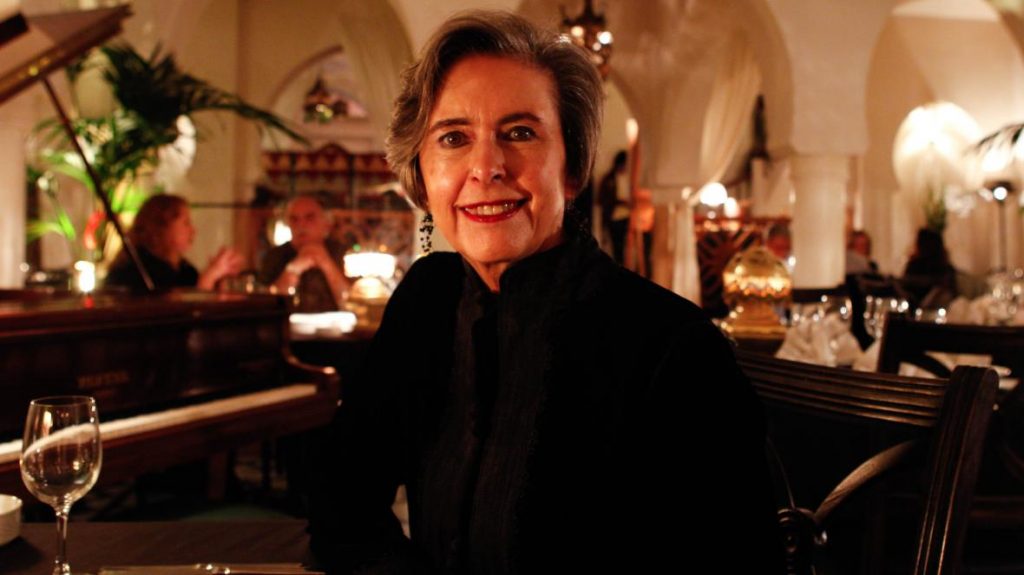 Kathy, who passed away in late 2018, was a former American diplomat who cashed in her pension to buy what she described as “a wreck of a building” in the city’s ancient medina. Together Kathy and Issam worked tirelessly to make Rick’s one of the world’s unique restaurants. And for those of you wondering… yes he can knock out a perfect rendition of As Time Goes By. I was itching to say “Play it again Issam”, but I didn’t have the balls. Plus you know, that famous line actually went unspoken.

So what about the food? I hear you ask. Well, that dinner may be over a decade ago, but I still rate it as one of the best. I actually had to check their online menu to remember what I’d gone for. My main was a T-bone steak with caramelised onions, while for dessert we’d shared a taster platter of sweet bites. Enter cheesecake, chocolate mousse, vanilla ice cream and more.

The service was spot on that night too and in the excitement of it all we spontaneously decided to order a bottle of the house champagne while we waited for our deliciousness to arrive.

It was very busy that evening, as it is most nights I’m reliably informed. As a result, it would be wise to reserve a table in good time. We could have gone anywhere for our honeymoon dinner. But looking back, I can only conclude that “of all the gin joints in all the towns in all the world, I’m glad we chose this one!” Sorry, it had to be done. You can find Rick’s Café at 248 Boulevard Sour Jdid. it’s open daily from 12:00-15:00 & 18:30-01:00. For more info, here’s their website.

Like this? Then why not have a look at my other reports on Casablanca.

I’ve also written a bunch of reports from all around Morocco.

I’ve been living, working and traveling all over the world for nearly twenty years, so why not check out my huge library of travel reports from over 30 countries.