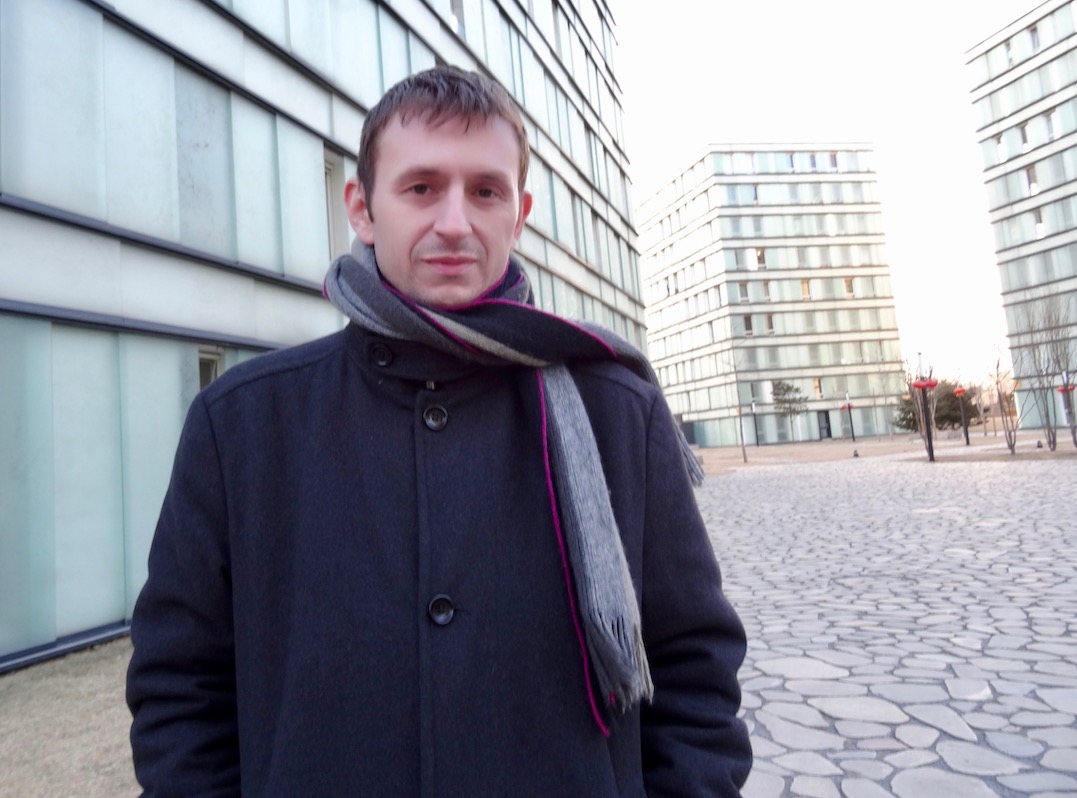 The sleepy, unremarkable Beijing neighbourhood of Shangdi in Haidian District stands as the dictionary definition of a non-place. There is very little to see and even less to do. As a result, very few foreigners pass through Shangdi. And yet somehow, this is where I lived for two years teaching English at a tiny language school in a residential complex called MOMA.

Yup, that’s me pictured above framed between MOMA’s cookie cutter apartment blocks. Putting its visual appeal (or lack of it) to one side, MOMA was actually one of the finest places to live in Shangdi back in 2009 when I first came here. Furthermore, I was lucky enough to secure one of its spacious, modern apartments through my teaching job. 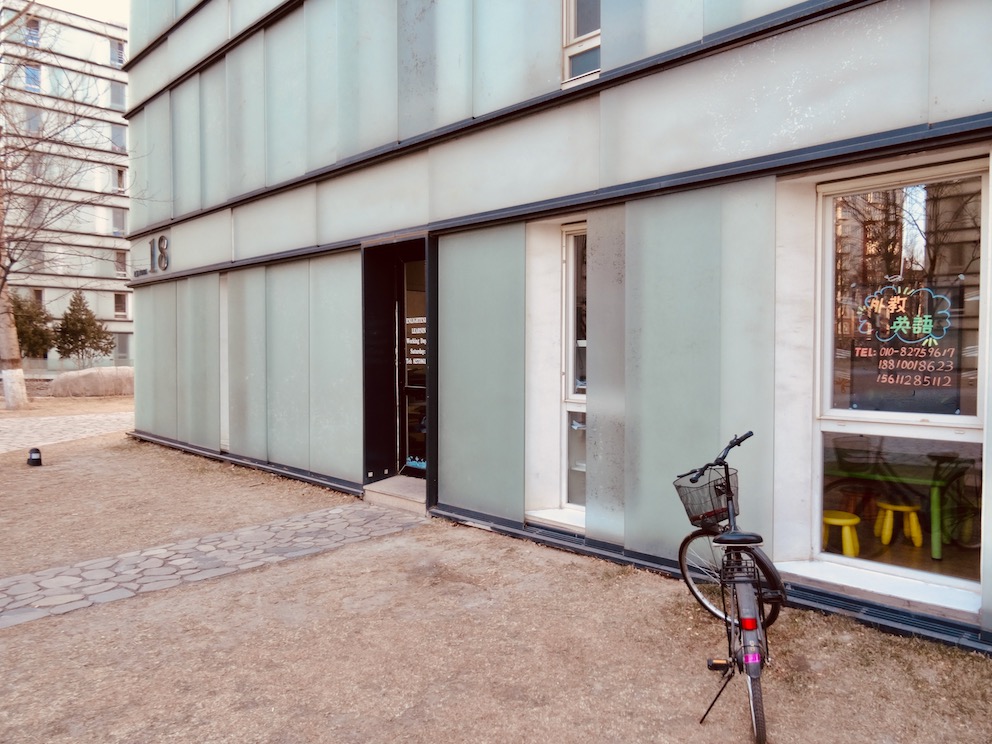 There were very few English language schools in Shangdi back in 2009-2010. And to be honest, there wasn’t much more competition four years later when I returned in 2014 for another contract as head teacher. I wish I could say the job worked out as I’d hoped. However, school life here was… testing …. a subject I’ve already delved deep into with my short story collection Challenged In China. 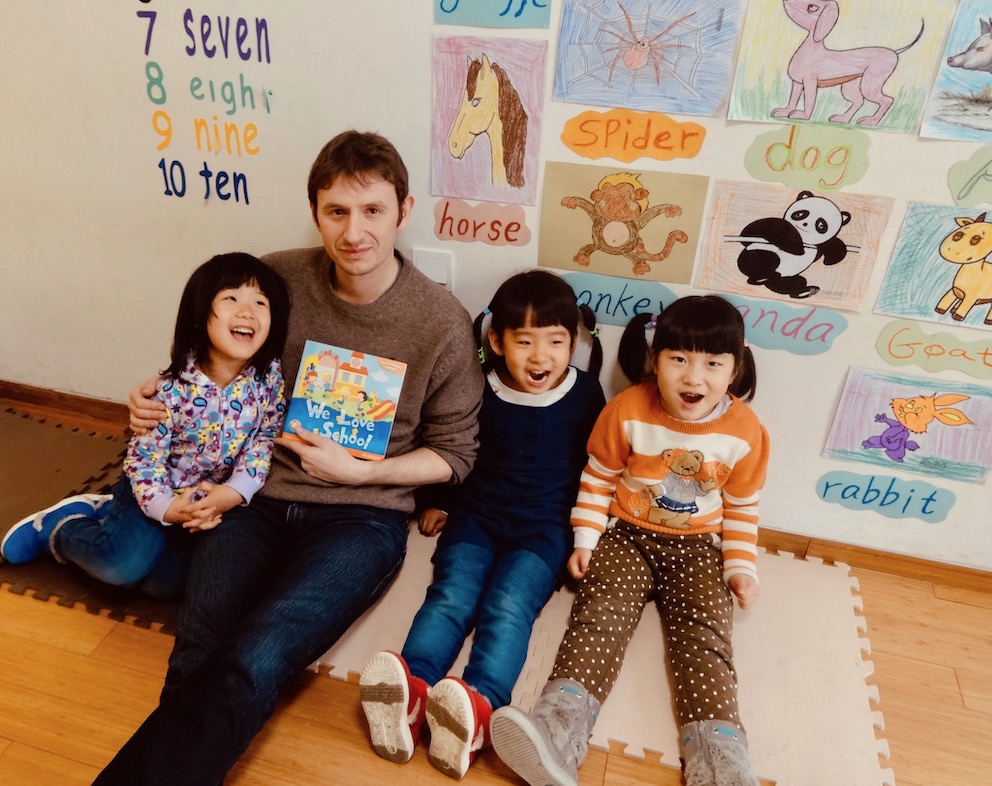 Nevertheless, I look back on those Shangdi school days with a great deal of nostalgia, especially the students I spent so much time with. This was my twice-a-week reading class with the incredibly cute Clare, Snow and Sofia. In the beginning they hated me and I won’t lie, it was tough during those first few months.

However, when I finally earned their loyalty it came with bells on top. “Leeeeeeeeeeighton!!!!” they’d scream each day on arrival, sprinting into my classroom and attacking me with full force hugs. 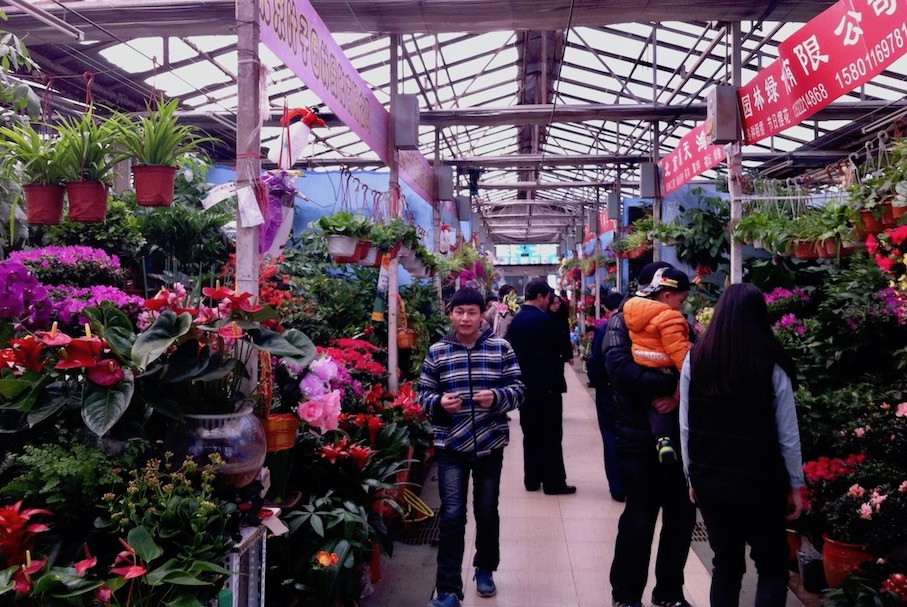 Shangdi was just as challenging outside of working hours due to the aforementioned dullness. With nothing to see and do, and the nearest expat centre over half an hour away, much of my time was spent at home writing and listening to music. Similarly, my teaching colleague Anthony and I held regular movie marathons.

Thus it was in Shangdi that I worked my way through the filmographies of legendary directors like Kubrick and Cronenberg. With so much time spent at home, I made regular visits to Shangdi Plant Market. They had some amazing plants and within a few months my room had become quite the urban jungle. 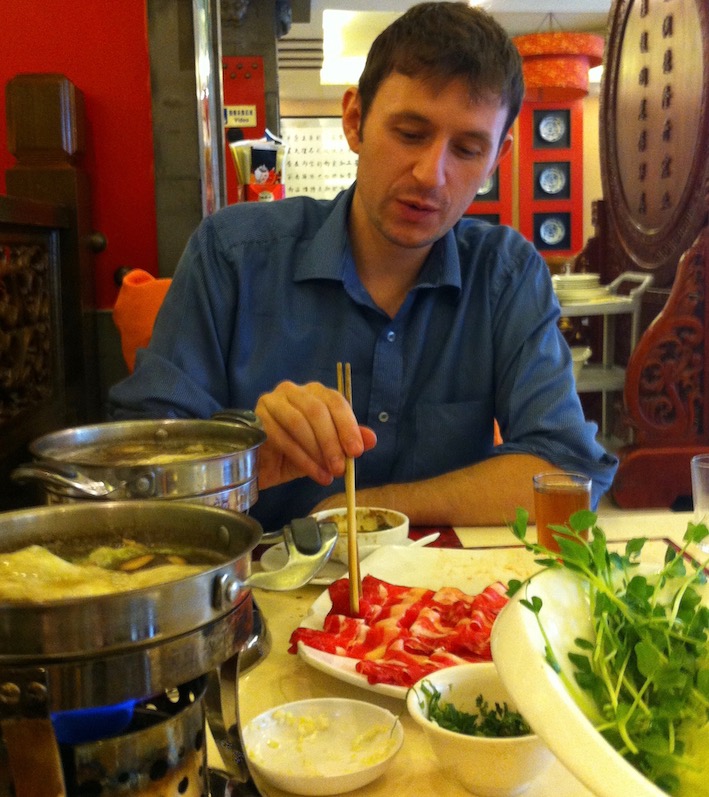 Another way of coping with Shangdi’s lack of action was by diving into the local restaurant scene. This was still Beijing after all and if there’s one thing you could count on it was the local food. This cool hot pot restaurant was just across from the school. Basically you order a bunch of vegetable and meat dishes, then throw everything into a simmering pot of soup stock and watch it all cook up. Finally, when stuff looks ready, simply fish bits out with your chopsticks. 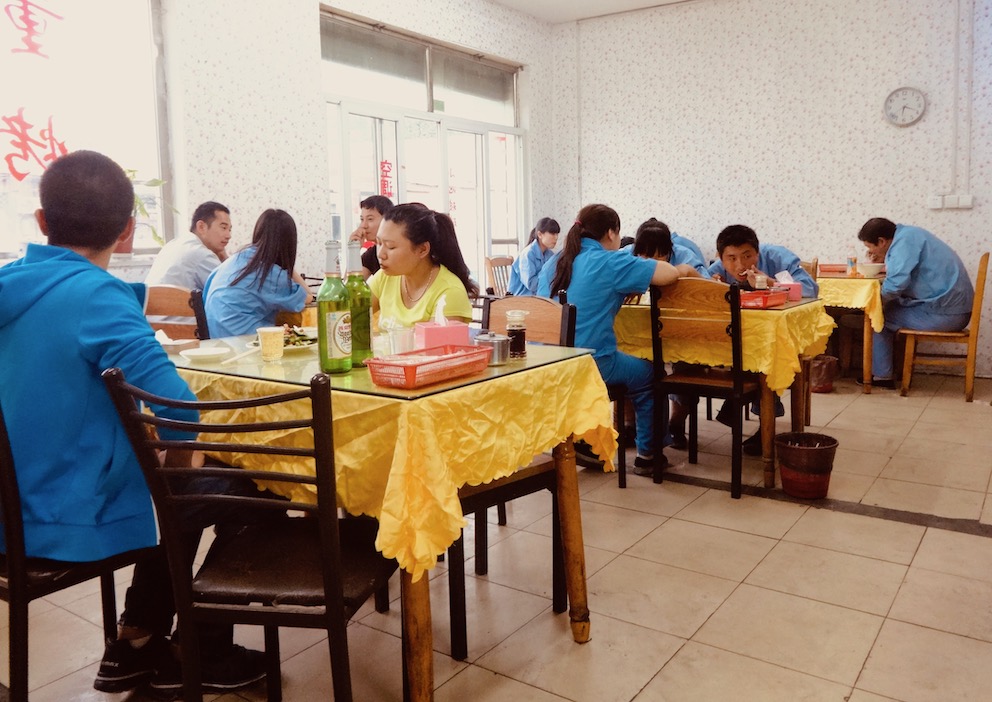 Lenovo workers on their lunch break.

Before long Anthony and I became obsessed with Shangdi’s local restaurants. Hence we made it our mission to visit as many as we could. Most of these places were rough in terms of decor and ambience, but we didn’t mind.

In fact, as long as the chow was good, the shittier the restaurant the more amused we became. A sizeable bunch of these eateries were within spitting distance of the Lenovo Factory. As a result, we’d often see streams of blue-coated workers coming in for a quick lunch before returning to their miserable lives. 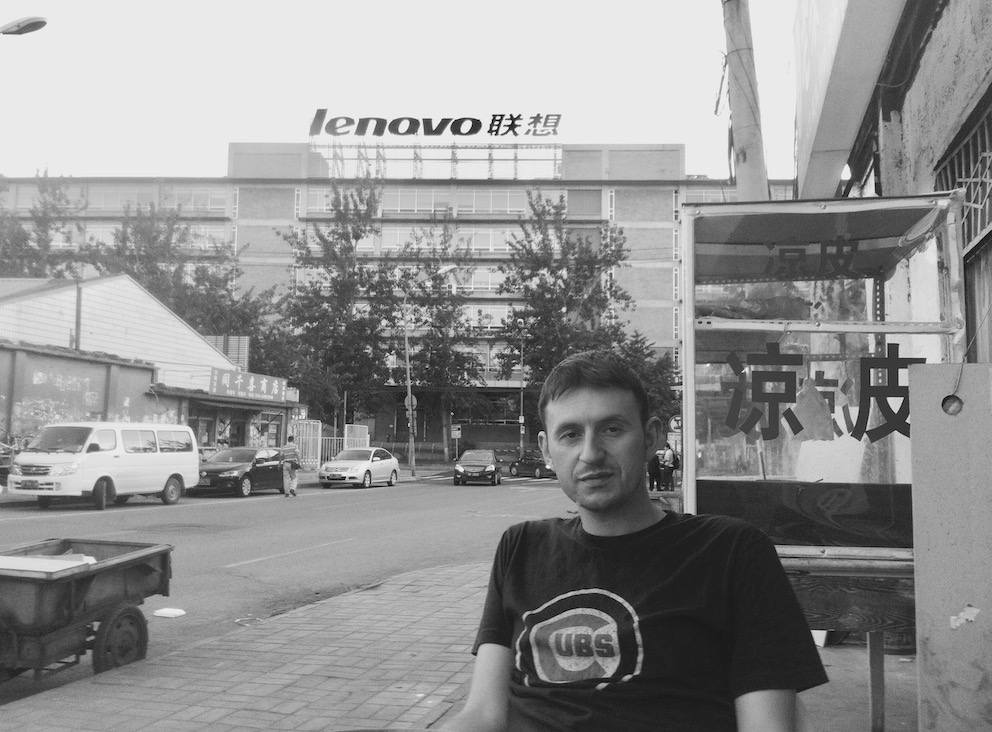 The Lenovo Factory in Shangdi.

One of our favourite Shangdi restaurants had choice views of that depressing Lenovo building. We called the restaurant Zero (long story) and we must have eaten here… no joke… about fifty times. 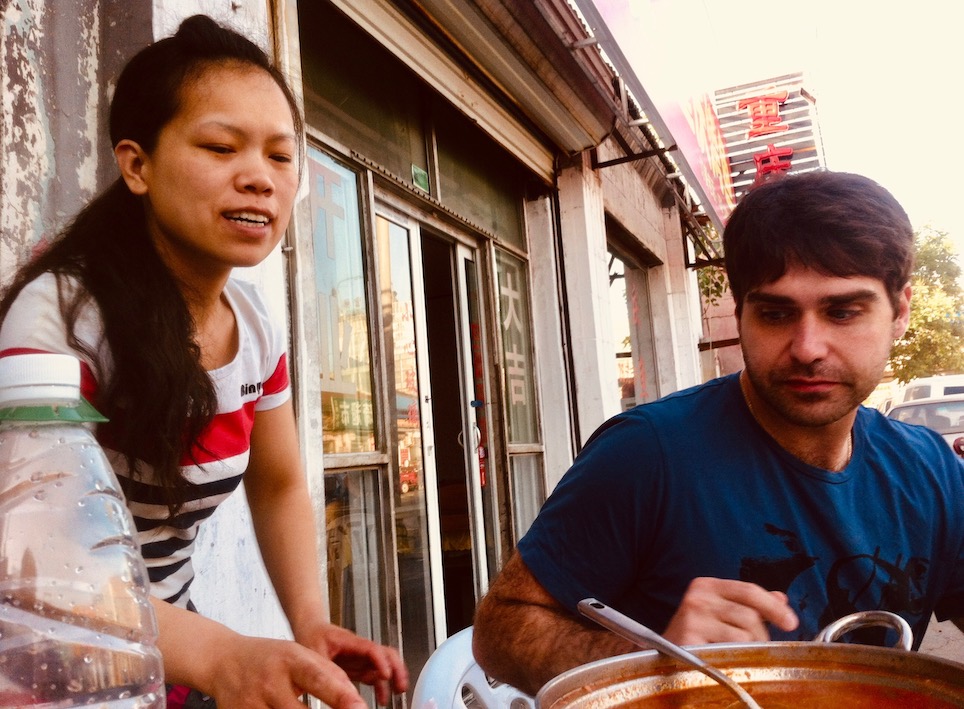 Zero did amazing pork, lamb and chicken dishes with rice and a whole range of mouth watering noodle bowls. From time to time we’d really treat ourselves, either to a giant grilled fish or a bowl of Mama Zero’s famous tomato soup stew. There are a zillion stories I could tell you about Anthony and I’s culinary adventures in Shangdi. But I shall stay patient and hold them back for my next short story series. 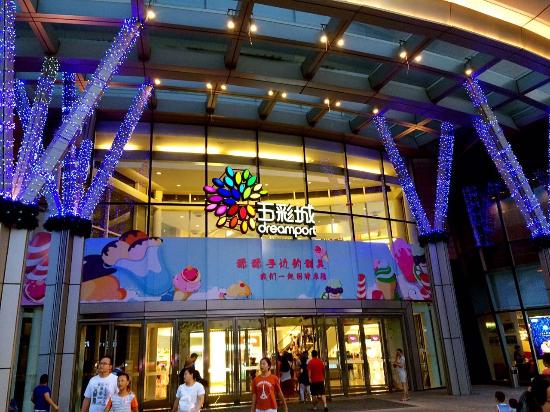 Shangdi’s most exciting spot back then was Dreamport Mall, known locally as Wu Cai Cheng. This was pretty much the only place in Shangdi where one could get a decent cup of coffee. They also had a bunch of Western fast food chains and a pharmacy selling vastly overpriced western toiletries. 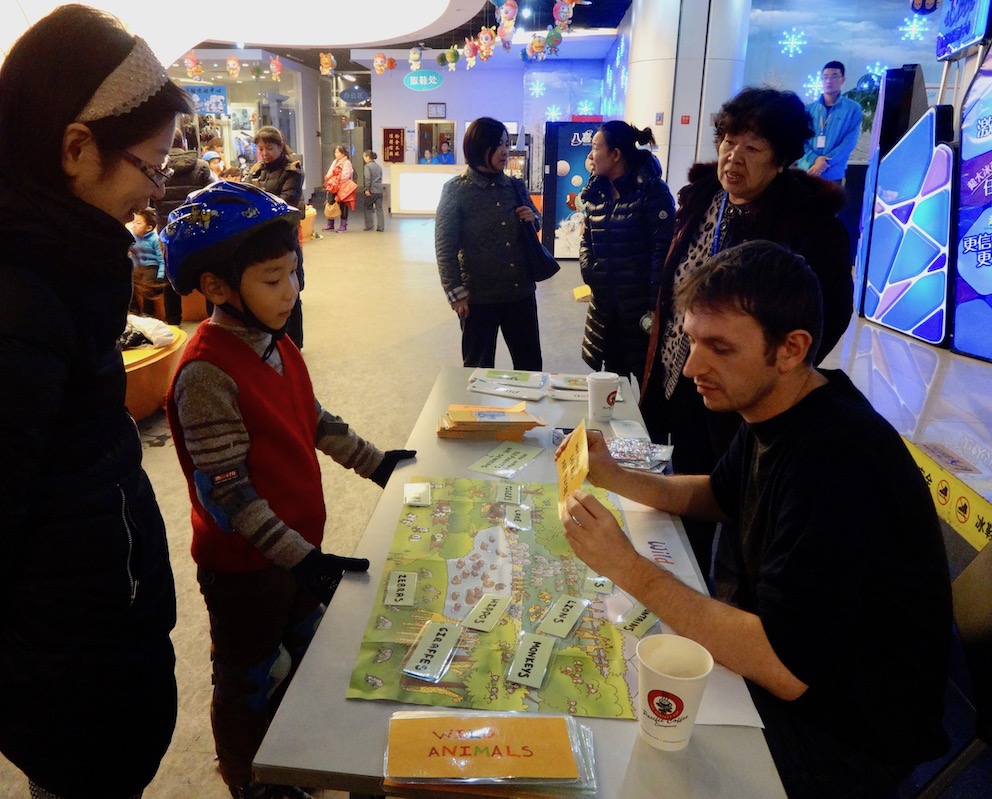 Dreamport Mall also had an ice skating rink. I had no interest in ice skating, but as fate would have it I still ended up spending lots of time there. Once a week for several months I set up an English stall to promote the school. It was simple stuff, just chatting to kids and playing vocabulary games, but after a while I became a bit of a celebrity. 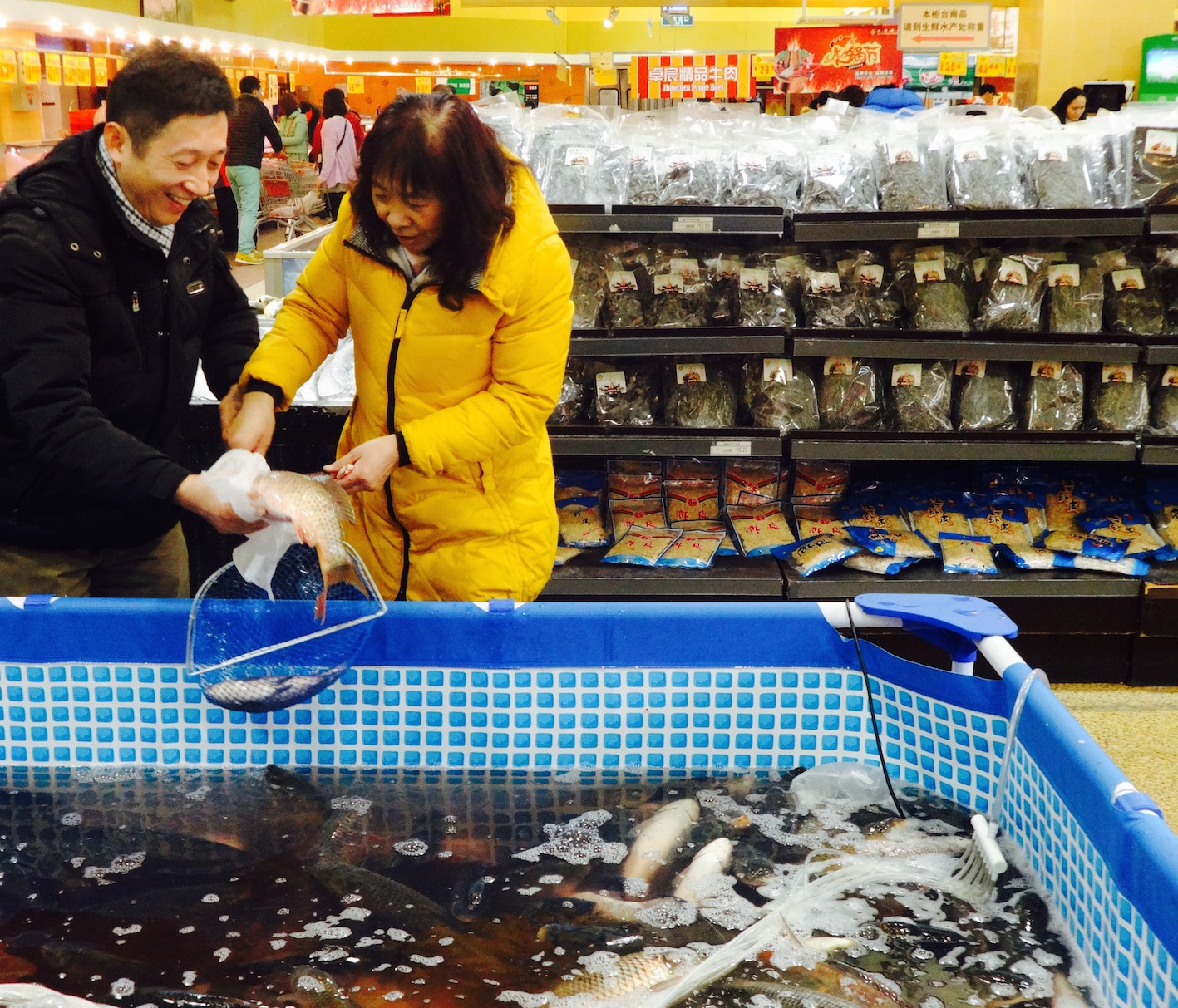 Dreamport Mall’s hypermarket was a chance to stock up my fridge with stuff I couldn’t get around MOMA. Actually they didn’t have that many western products, but it was still better than nothing. I remember how depressed I was during my first expedition, wandering past shelf after shelf of turtle soup, chicken feet and duck tongues.

This massive open-air aquarium in the middle of the store never ceased to amuse me. Especially as customers had to grab a net and scoop up their chosen fish themselves. I never did get round to doing that. 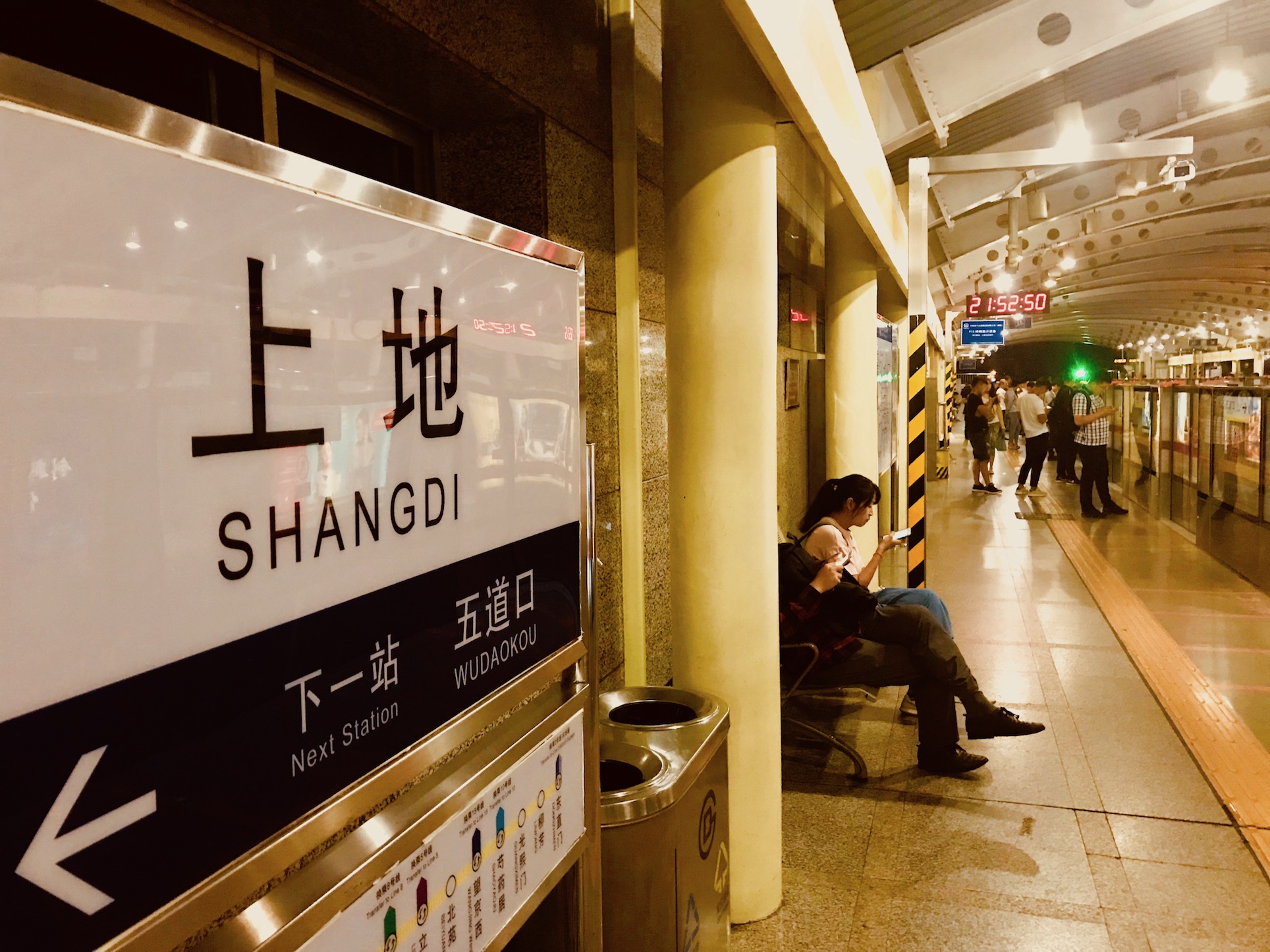 When I eventually left Shangdi for the second time in April 2015 I never thought I’d go back. Hell, I figured I’d served my time! But then, in September 2018, I flew to Beijing for a long weekend of sightseeing and catching up with old friends.

It was Anthony, still living in the Chinese capital, who suggested we pencil in a night revisiting our old Shangdi haunts. It had been three and a half years since we’d parted ways and, as I saw his towering figure from the other side of the platform at Shangdi Subway Station, I couldn’t help but feel a little emotional. 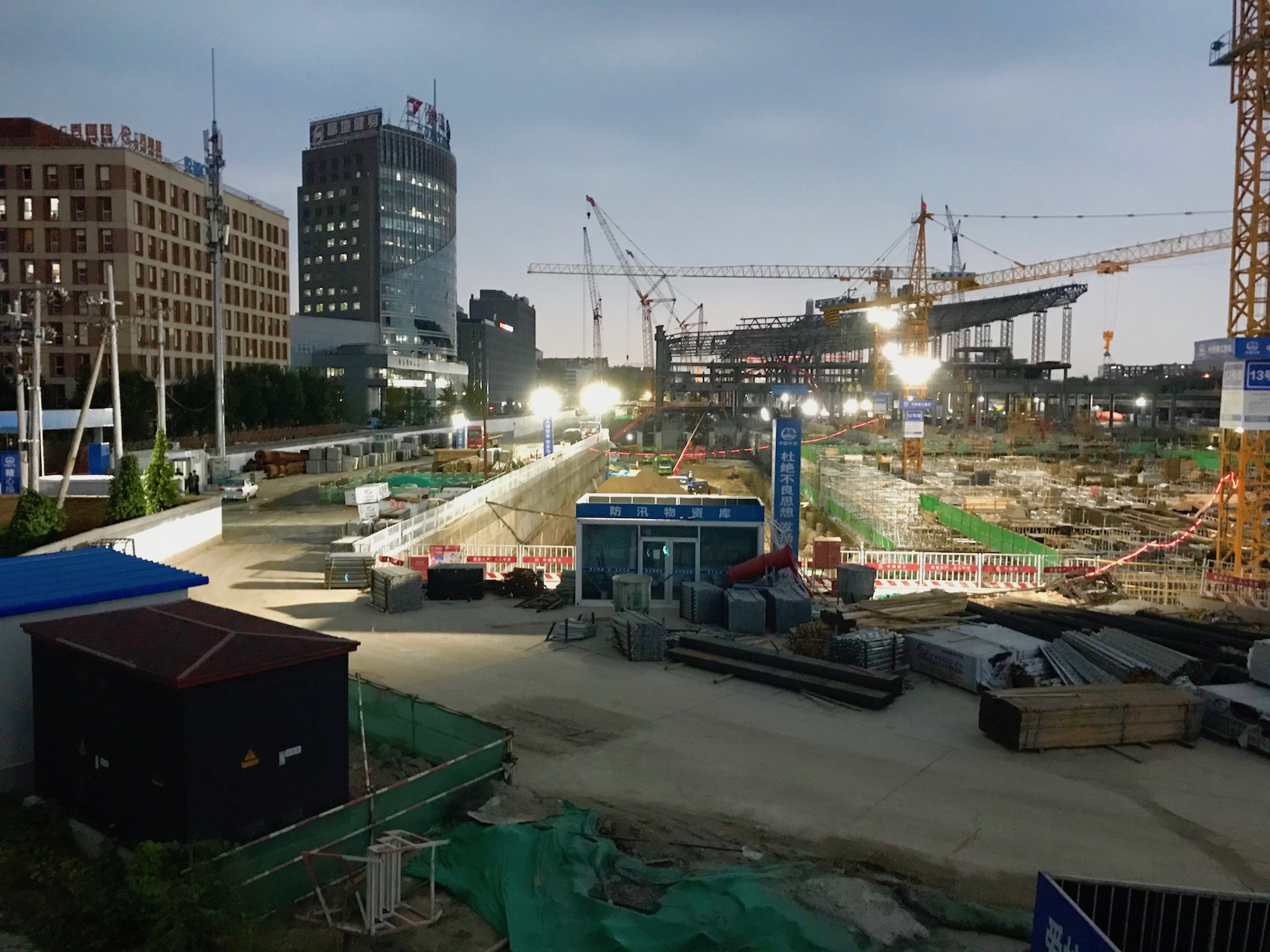 Shangdi is now the site of a proposed high speed rail link to Mongolia.

It was a truly bizarre experience that evening wandering around Shangdi. The area around MOMA and iMOMA, where I’d lived during my second year, had been pretty much bulldozed to the ground.

Consequently, all those favourite restaurants of ours had gone. In their place stood a construction zone of mammoth proportions. I later found out they’re building a huge train station that will, by 2020, provide a high-speed rail link into Mongolia. Would this be the project to finally put sleepy old Shangdi on the map? 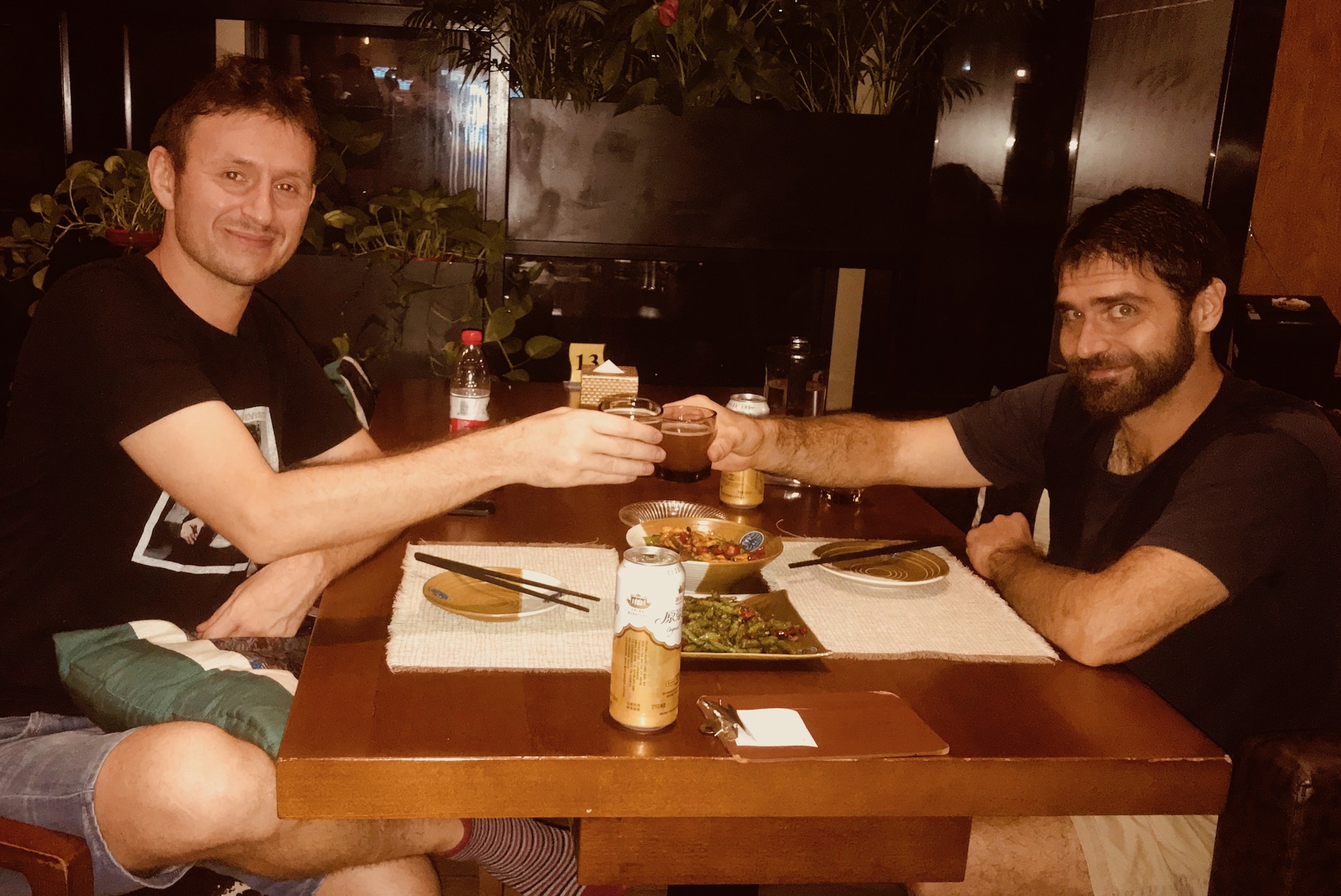 To cheer ourselves up, Anthony and I headed back towards Shangdi Subway Station for dinner at the best place in town. Show Restaurant was where we used to come when we wanted to truly eat like kings. Luckily it was still here, so we cracked open some beers and ordered up a storm of authentic Hunan cuisine. “To Shangdi” we cried, clinking our glasses. 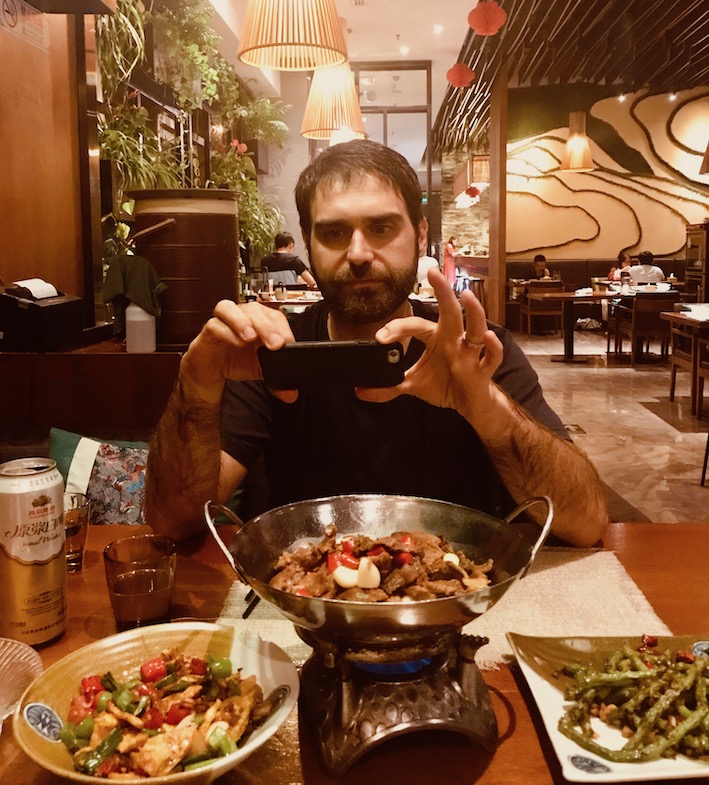 For more on my time living and teaching in Shangdi, check out my short stories Enlightening, The Good The Bad and the Naughty, The Children and the Witch, Bad Moon Rising, Sub Zero Adventures and Goodness Gracious, Great Wall  of China.

For more travel reports from the Chinese capital, check out my other articles on Beijing.