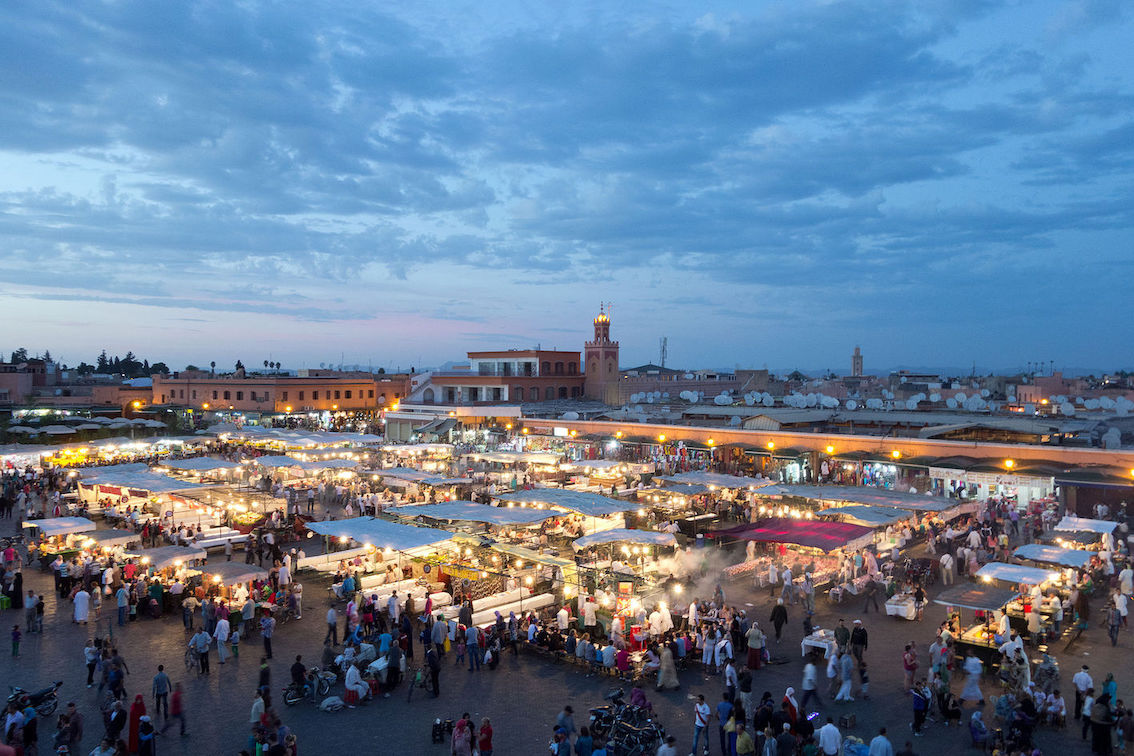 October, 2008. Wherever you’re staying in Marrakech, or indeed whatever you’re itinerary is, sooner or later all paths lead to Jemaa el-Fnaa. This massive public square serves as the beating heart of the city; playing host to food stalls, live music and street performers of all kinds. However, the plaza hasn’t always had a joyous carnival vibe. Back in olden times it hosted high profile public executions! Furthermore, its dark history has been preserved in its name, because Jemaa el-Fnaa translates as Assembly of the Dead.

I remember feeling slightly disappointed when I entered Jemaa el-fnaa for the first time. It was a warm afternoon and the atmosphere was drowsy to say the least. We’d heard that things don’t really get going here until the evening, but still, this felt a bit like a dead assembly. There were only half a dozen or so umbrellas set up, so what little foot traffic there was gathered around them.

I was surprised to see that one of the umbrellas was empty, so I ducked under to take a look. “Ah sir hello, yes. You come to meet snake?” Uh… had I come to meet snakes? I wasn’t so sure I had. In any case the boy in the purple-grey robe was already holding out his hand and asking for money. “Sir I make snake dance, he love the music!” he grinned. Pulling a wooden flute out of his bag, the boy proceeded to play a jaunty tune. The snake certainly reacted, jumping to attention and swaying from side to side.

I must admit that back then I had no idea about the unethical practices of snake charmers. I wasn’t aware that the creatures were simply trained to associate the flute with dinner time. Hence their increased attentiveness! The so-called charmers of Marrakesh also routinely remove snakes’ fangs in order to ensure maximum safety. In some cases, people have even reported seeing the beasts’ mouths sewn up.

The guy I spoke to that day was obviously a shrewd businessman. In addition to my initial payment for the charming, he also demanded a further fee to let me hold one. Similarly, the price was jacked up again for the privilege of taking photos. Finally, after much negotiating, we agreed on a price to suit both parties. For more on Marrakesh’s murky snake culture, check out this interesting article from peregrine adventures.com.

Jemaa el-Fnaa exploded into life that evening! Dozens and dozens of umbrellas, food tents and stalls shot up across the square. As a result, droves of people began pouring in. This is the perfect place for dinner and traditional Moroccan dishes dominate the scene. You can literally find it all here, from tajines and cous-cous to roasted lamb, grilled bread and baked sardines.

S and I ate here twice during our stay in Marrakech and both times the food was excellent. Let’s be clear, you will experience hassle from touts and, as a general rule, I’d suggest picking a place where Moroccans eat.

A great culinary discovery on Jemaa El-Fnaa was a local dessert advertised simply as spice cake. It was really delicious, a kind of rich, ginger cake with hints of cardamom.

Traditionally, one takes a hot glass of ginger tea with the cake. I suspect it might be too sweet for some, but for me it was a winning combination.

Food aside, there’s nightly entertainment all over Jemaa el-Fnaa and some of it is pretty wacky. On any given night, you might see acrobats, belly dancers, fortune tellers and some truly bizarre Arabic-language performances that I think may be a form of pantomime or slapstick comedy.

There are also fairground style games like the bucket toss and balloons & darts. This fishing game proved incredibly popular, despite the fact that it looked exceptionally difficult and that the prize at hand was a disappointing bottle of soda. Whatever the outcome, the vendor is the winner.

Pleased with my painting of Jemaa el-Fnaa.

On my final day in Marrakesh I was rooting around an antique shop in the Medina. Among the grubby plates, cups, teapots and jewellery, I came across a beautiful canvas painting of Jemaa el-Fnaa at sunset. I instantly fell for it, spellbound by the horizon and the crowd bleeding into each other in a glorious glow of orange, yellow and red. The man who worked in the shop claimed to have painted it himself.

Maybe he was telling the truth, maybe not, it really didn’t matter. In the end the painting came home with me and now, eleven years later, it sits in a box in the attic of a launderette storage room in northern Scotland. If I ever get a real home again, I’ll be sure to find it an important spot.

Like this? Check out more of my travel reports from around Marrakesh.

Or maybe look further afield with my articles from across Morocco.