October 2008. Already had dinner in the open air food markets of Jemaa el-Fnaa? Unearthed some hidden artwork at Marrakesh Museum? Escaped the crowds with a stroll around Majorelle Garden? Great, you’ve gotten off to a good start. In this article, I wrap up my old adventures with a look at some cool spots around Marrakesh.

An obvious starting point are the souks, a huge part of Marrakesh’s appeal. Hence the reason plenty of tourists come to the city purely for a shopping expedition. Most of the central souks wind around Jemaa el-Fnaa, where there’s a focus on pottery, spices, leather and rugs.

In all honesty, I found the markets of Casablanca and Essaouira much cheaper and less stressful. Therefore, we didn’t bother with shopping in Marrakesh. Except for picking up a bag of delicious treats from this cheerful dessert vendor. For a deeper look into the city’s market scene, have a read of this excellent article from theculturetrip.

A herbal medicine shop in Marrakesh.

Herbal medicine stores are also a big deal in Marrakesh. There are loads of them scattered around the city and they’re well worth a look, even if you’re not searching for anything in particular. Step inside and you’ll see jars of weird flakes and liquids lining the shelves, while the air is pungent with spices and oils.

A herbal medicine shop in Marrakesh.

You’ll also see white coated workers wandering around, ready to give customers a prognosis at any given moment. Public opinion certainly seems split on Marrakesh’s herboristeries. Some say the natural remedies on offer are a revelation! However, there are plenty of naysayers too, who claim these places are little more than scam centres. If you do partake, keep an eye on the weighing process and the weight of the bag used. Furthermore, if the quote given seems a bit on the high side, always question it. In most cases, negotiating is possible.

Having trouble in the bedroom? Marrakesh has got you covered with a range of colourful aphrodisiacs! Lots of first timers feel curious albeit a little suspicious about these herbal medicine shops. Therefore you might want to start off with Herboristere Des Amis, one of the city’s most noteworthy and best reviewed stores. 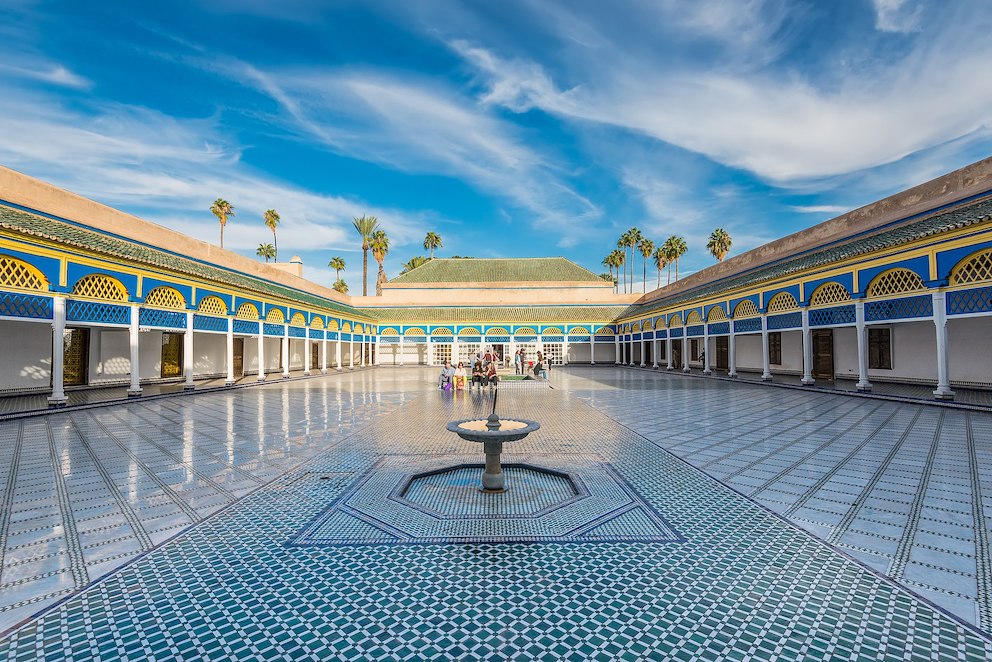 There are a handful of stunning old residences to tour in Marrakesh. One of the most beautiful is Bahia Palace, built in 1867 for the Moroccan ruler, Ba Ahmed. Its focal point is the impressive Court of Honour, home to some of the city’s most historical speeches and festivities.

Furthermore, Bahia Palace has 150 rooms to explore set between charming corridors, gardens and courtyards. While you might be disappointed to see these chambers standing largely empty, above all a visit here is an exercise in architectural appreciation.

As a result, just drink in all the details; from the mosaic tiles and stained glass windows to grand fireplaces and beautifully painted window shutters. For more on Bahia Palace, swing by their website.

If you only stop by one Marrakesh mosque, I’d certainly go for Koutoubia Mosque in the medina’s southwestern quarter. This is the city’s largest and oldest mosque, dating back to the 12th century. Its name comes from the old Arabic word for bookseller. This is due to the fact that hundreds of book vendors used to trade around the building’s entrance. Take note that non Muslims can’t actually go inside. However, it’s still cool to time your visit for one of the five daily calls of prayer.

It can be a challenge fitting all of Marrkaesh’s sights into your stay, especially if you only have a few days. Nevertheless, it’s well worth squeezing the Saadian Tombs into your schedule. This massive burial compound serves as the final resting place for a whole host of Moroccan sultans, including their wives, brothers and closest political advisers.

Sultan Ahmed el Mansour took the complex to the next level by constructing a number of buildings, including the splendid centrepiece Chamber of the 12 Pillars. Actually the sultan himself knew he’d end up in here, so he certainly didn’t spare any expense. Consequently, he arranged for pure gold decoration and the finest marble imported from Italy! Head to the official website for more history, along with opening times and ticket prices.

Like this? Check out more cool spots around Marrakesh.

Or maybe look further afield with my articles from across Morocco.