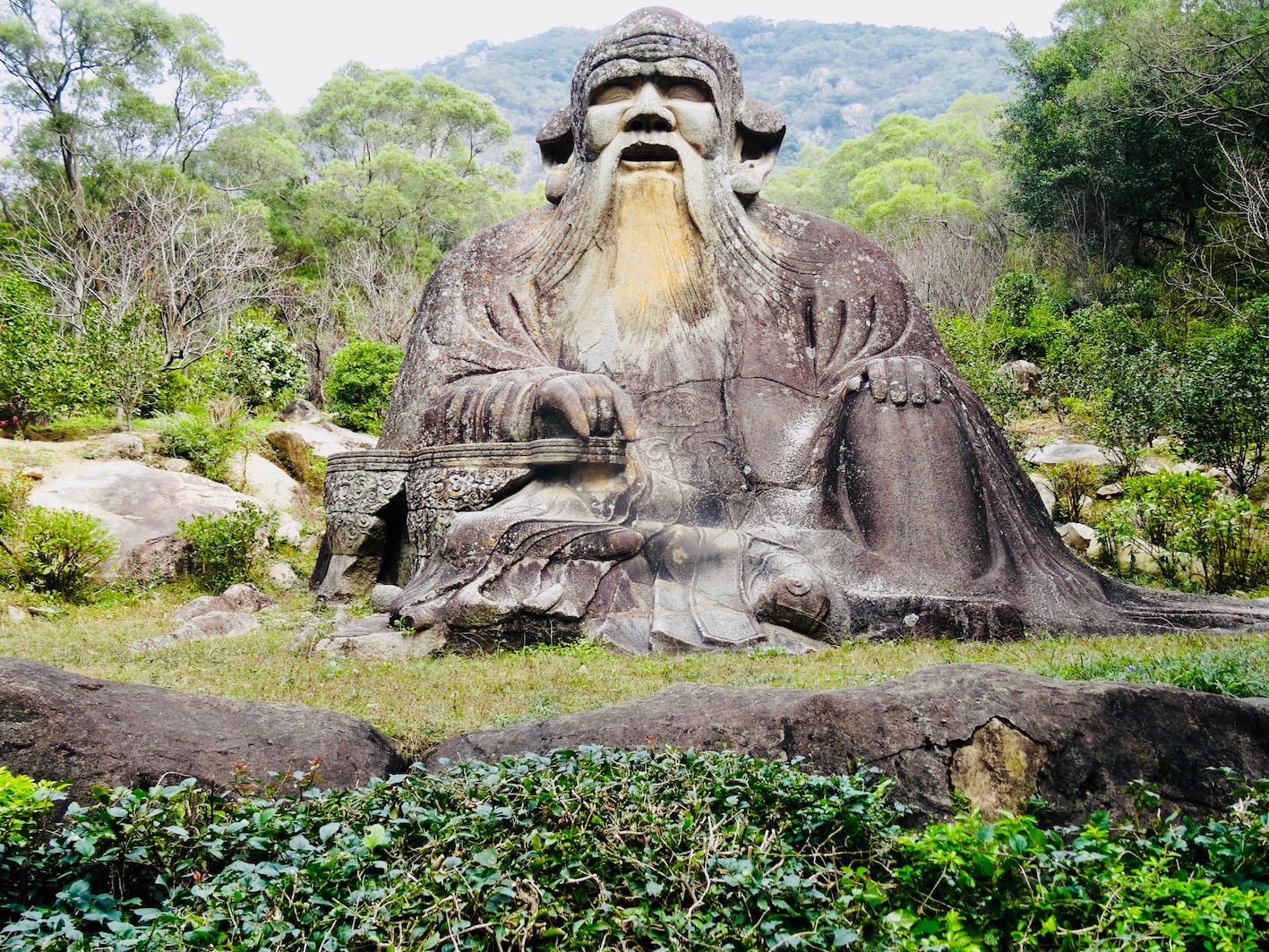 Beautiful Qingyuan Mountain is a protected national park in China’s Fujian province. Located just three kilometres outside the city of Quanzhou, Wonderboy and I simply hailed a taxi and boom, we were there within minutes. Dating back to Imperial China’s Tang Dynasty, the mountain is famed for its giant statue of Laozi, the founder of Chinese Taoism. Hence the mountain gets its fair share of Taoist monks who come here on pilgrimages. 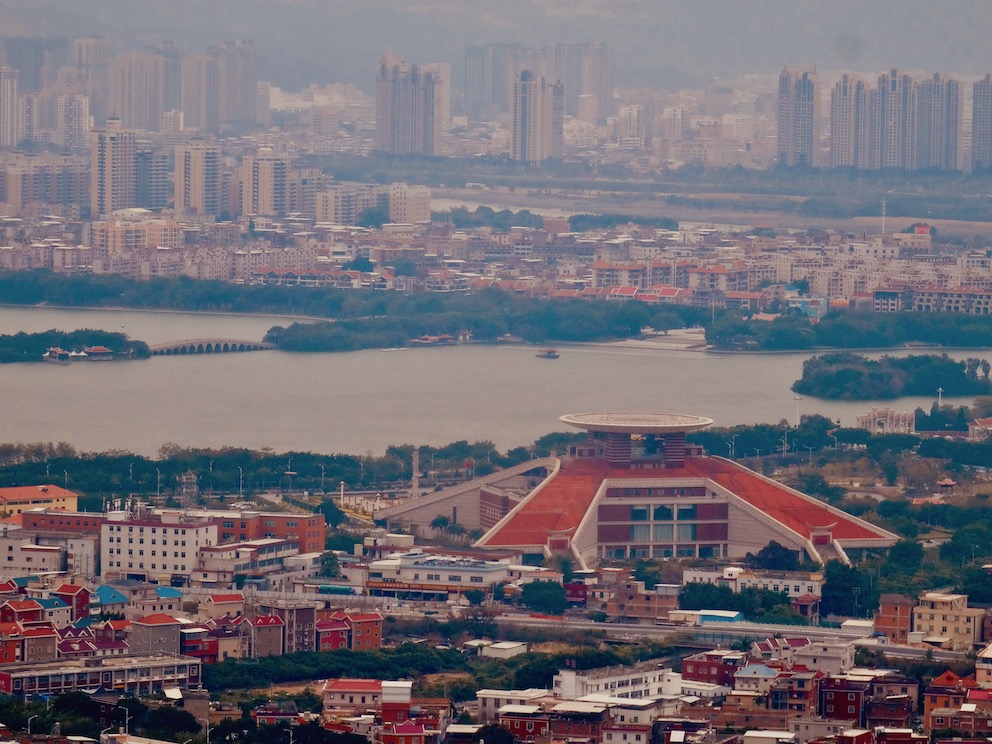 Views across Quanzhou from Qingyuan Mountain.

I’ve seen a fair whack of Chinese mountains in my time. However, Qingyuan certainly holds its own with an abundance of curious sights on the way up to the summit. There’s a shrine and statue to Buddhist master Hongyi and numerous pavilions. Furthermore, you’ve got engraved rocks and magnificent trees transplanted from Taiwan by Chinese army generals. All the while increasingly impressive views over Quanzhou open up, even on a grey, wintry afternoon like this one. 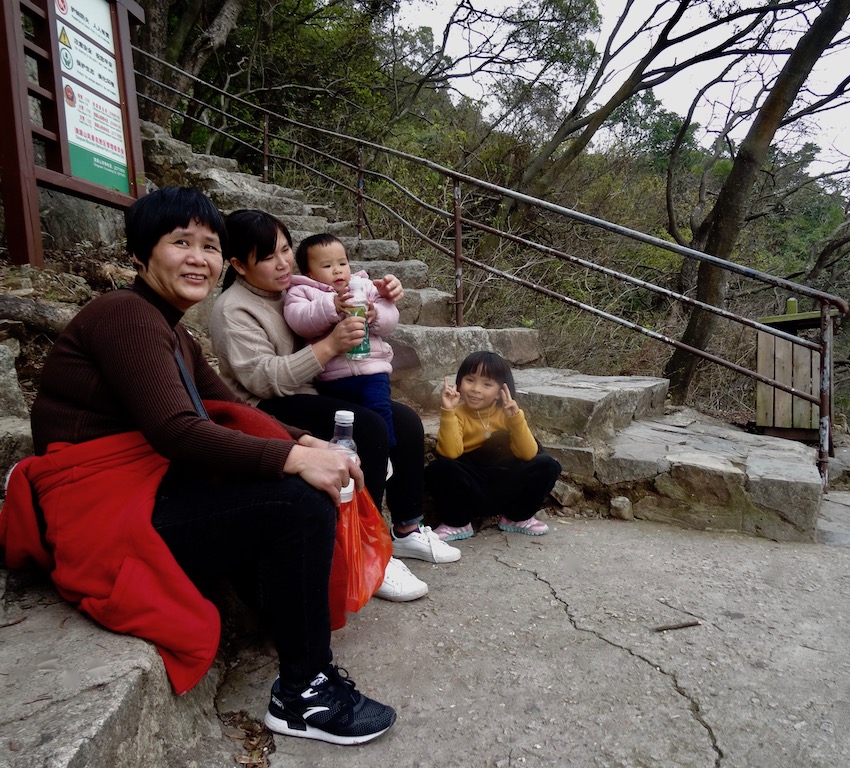 Our Qingyuan experience came during The Chinese New Year break. As a result, many of the people we bumped into were in a festive mood and keen to exchange a few words. We met this family at a much needed resting point after a gruelling set of stone steps. The little girl was particularly chatty, not at all put off by our lack of language skills. 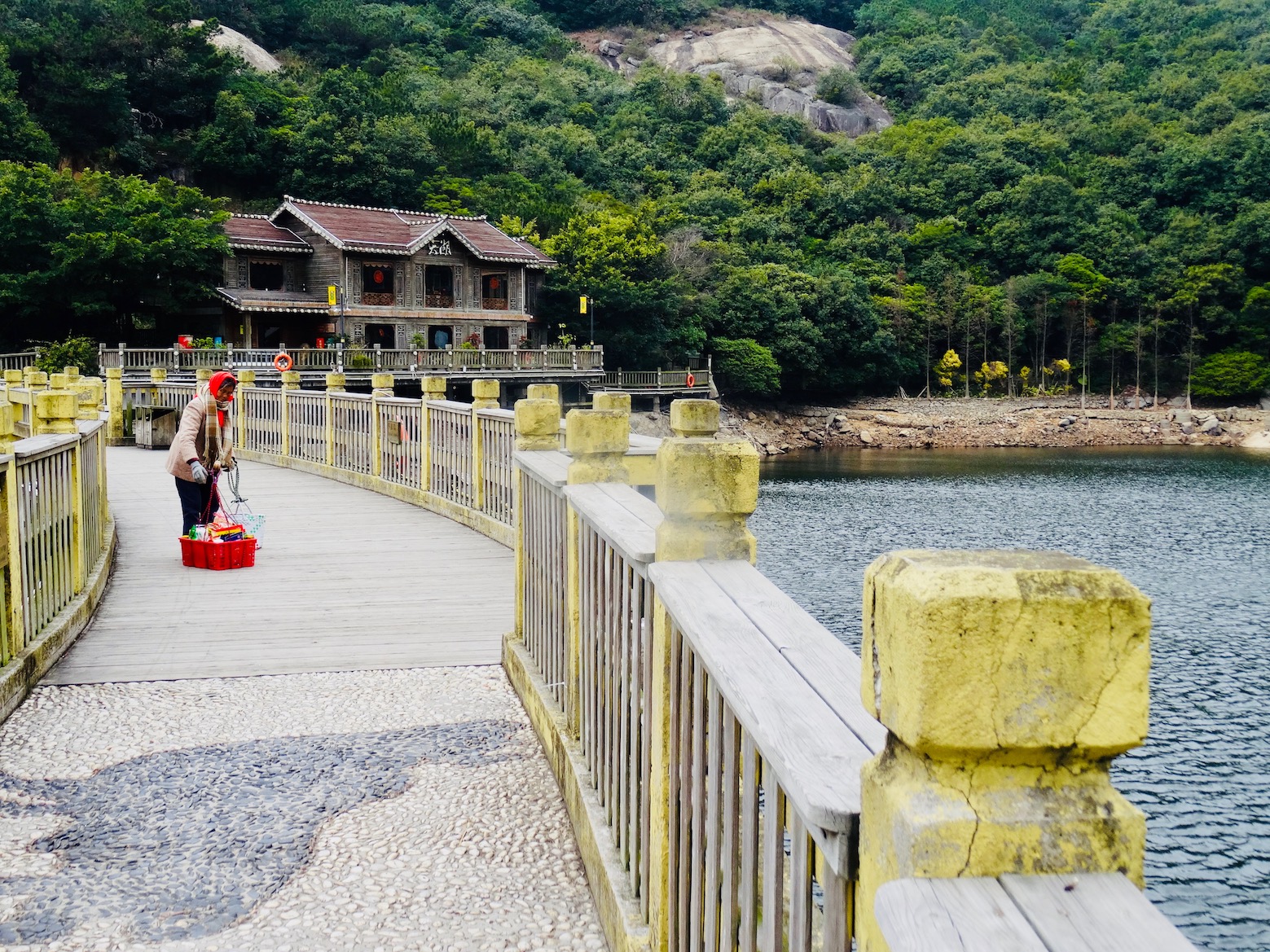 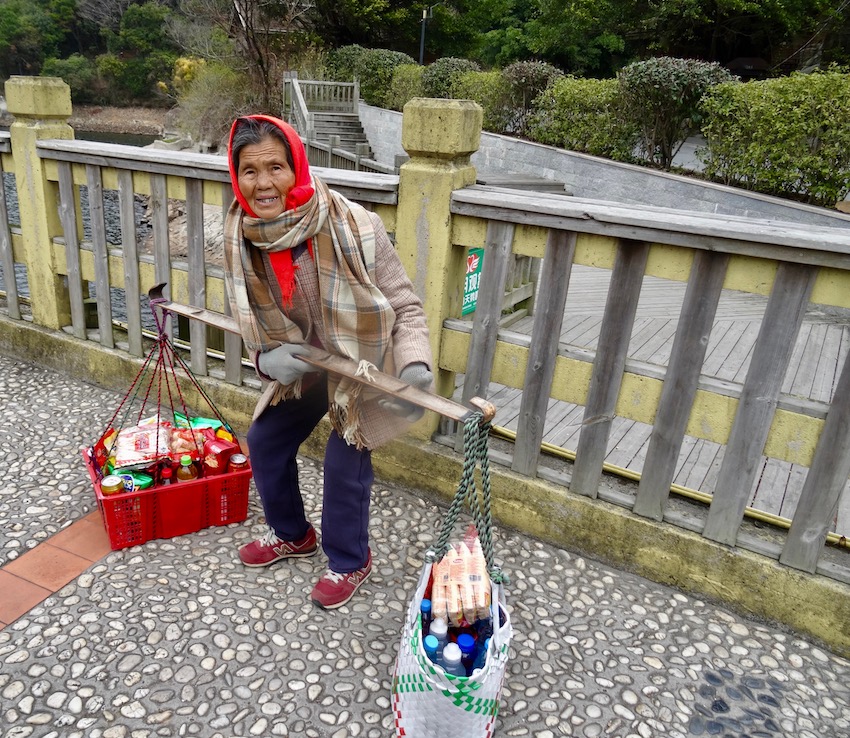 As we crossed the bridge, Wonderboy and I were accosted by an old lady and her considerable load of uninspiring snacks. She certainly was persistent, following us nearly all the way down and talking constantly in her high pitched voice. Consequently I relented and finally bought a bottle of water just to shut her up. She didn’t appear grateful. 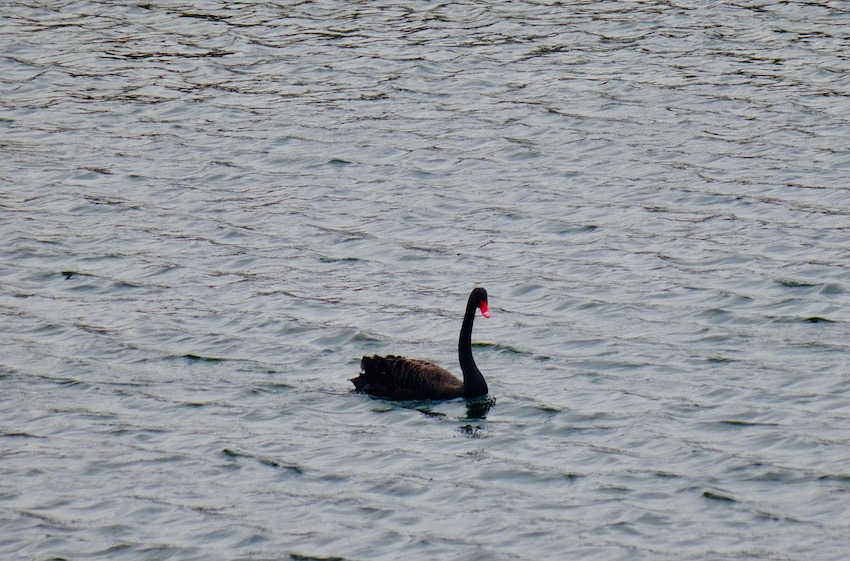 As you cross the bridge, look out  for the lake’s resident family of evil-looking black swans with their red beaks. Seriously, these guys were like Darth Vader’s henchmen. Inside the Qingyuan Mountain Visitors Centre meanwhile, we were bemused to discover the place empty with no café. Even more annoying, the bored looking girl behind the counter informed us that the postcards on display in the so called post office were not for sale! Why? Because, China. 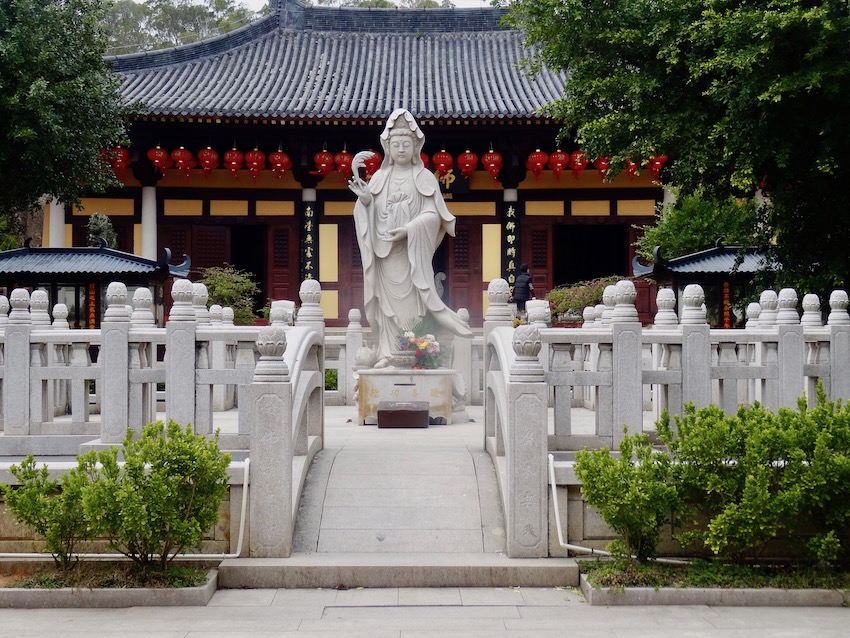 There are a handful of pretty temples scattered around Qingyuan Mountain. One of them is Nantai Temple, with its giant bell and drum, revolving golden columns and sleeping Buddha. 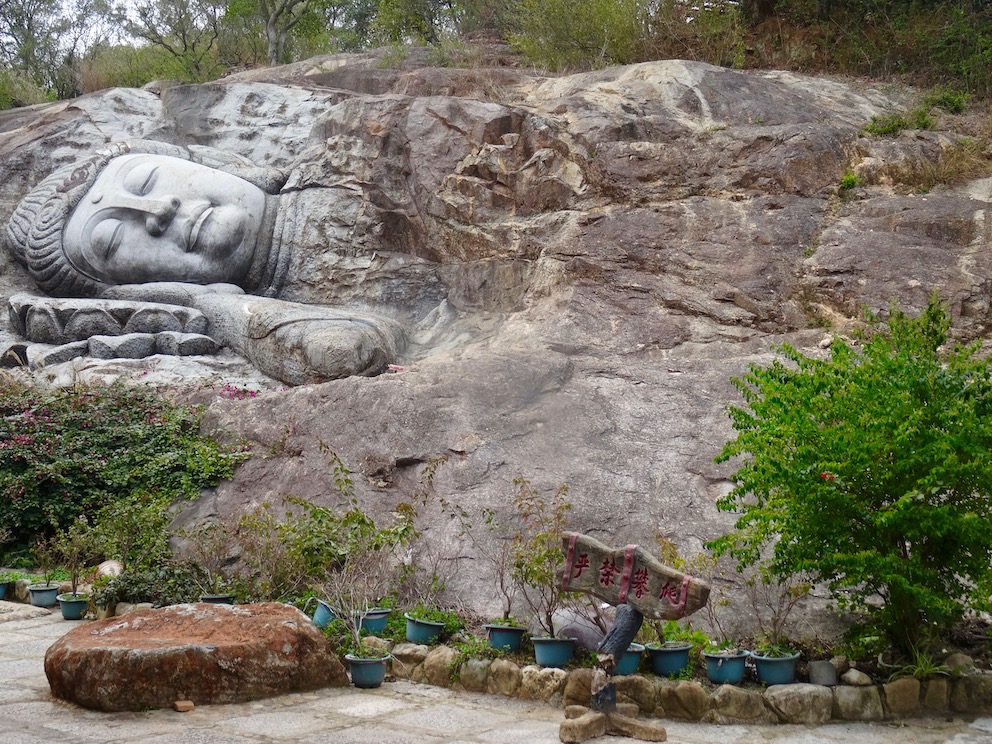 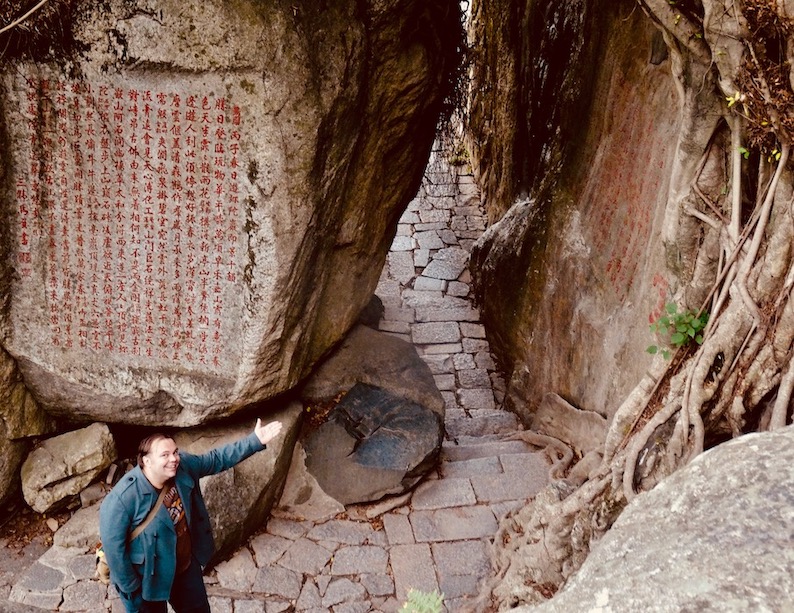