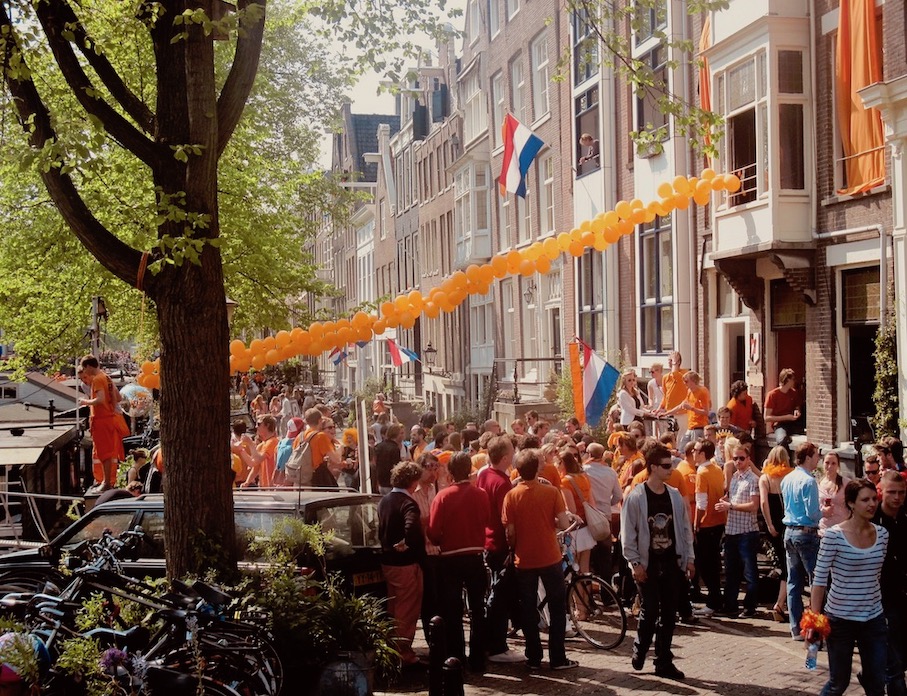 Back when I lived in Amsterdam, the biggest day of the year was always Queen’s Day. Livelier than New Year’s Eve and a damn sight crazier than Christmas, Queen’s Day Amsterdam took place on the 30th of April to celebrate the birthday of Queen Beatrix. However, the tradition of this intense, all-day city-wide street party dates back to 1885 when a national day of celebration was announced to mark the fifth birthday of Princess Wilhelmina. Back then it was called Princess’s Day and it fell on August the 31st. This title stuck until the princess finally became The Queen of Netherlands in 1898. Consequently… and you know this makes sense… Princess’s Day became Queen’s Day. 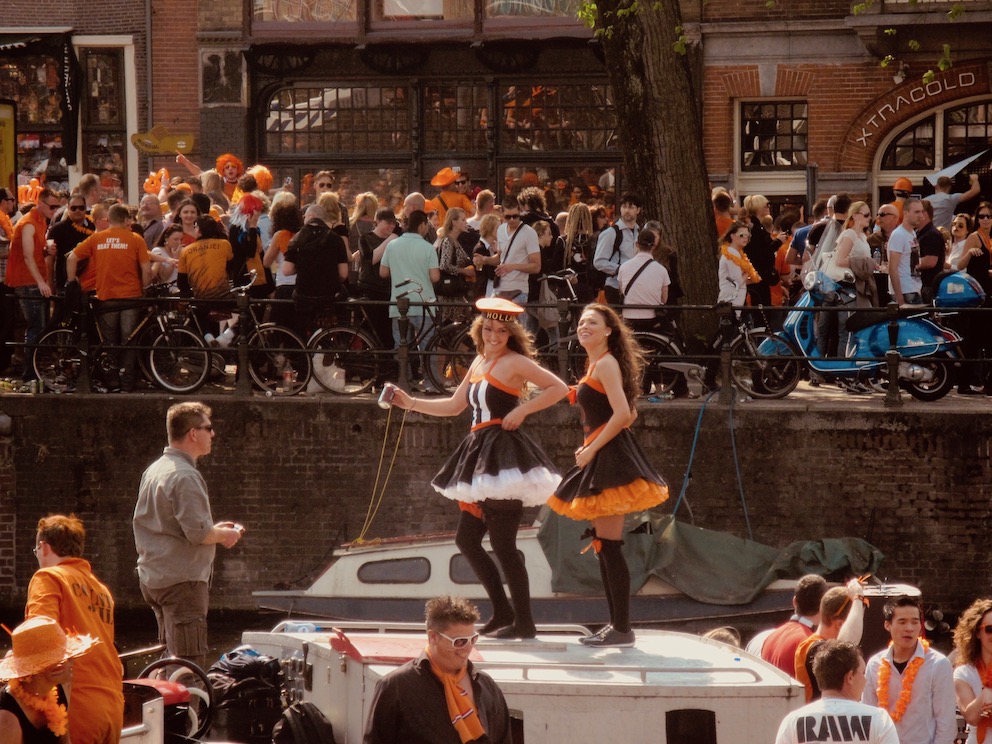 In 1949 Queen Wilhelmina abdicated due to poor health and the national day of celebration continued in honour of the new Queen, Juliana. Her birthday was on April the 30th, a new annual date for Queen’s Day. She ended up ruling for 42 years, giving way to Queen Beatrix in 1980. Beatrix’s birthday was actually in January, a wholly unsuitable day for people to be out partying in the streets. Furthermore, most of the city’s canals would be frozen, making the treasured tradition of boating impossible. As a result, Queen Beatrix unselfishly declared that Queen’s Day would remain on April the 30th. Hooray! 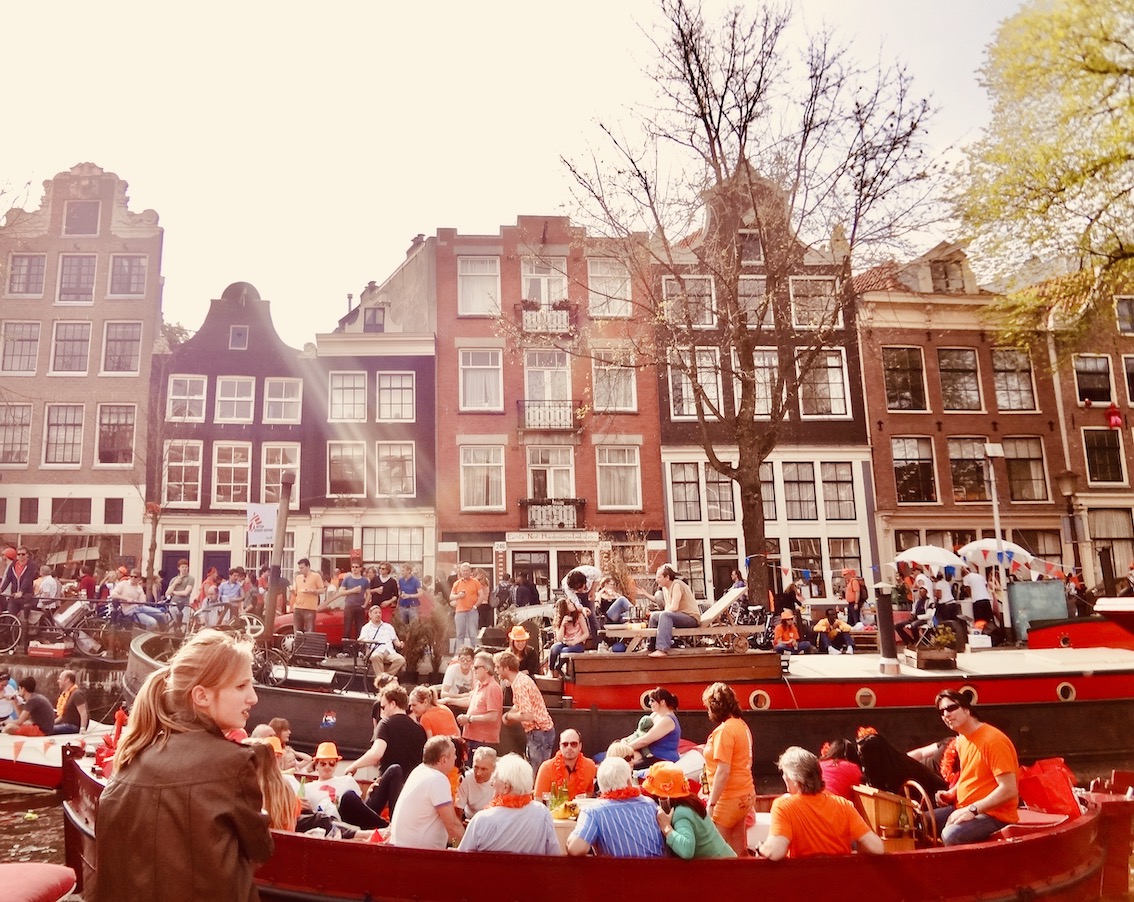 My first Queen’s Day was in 2011 when Beatrix was still the Dutch Queen. I was quite taken aback by just how transformed the city was. Thousands of people spilled out onto the streets and the canals, and nearly everyone was dressed in orange. 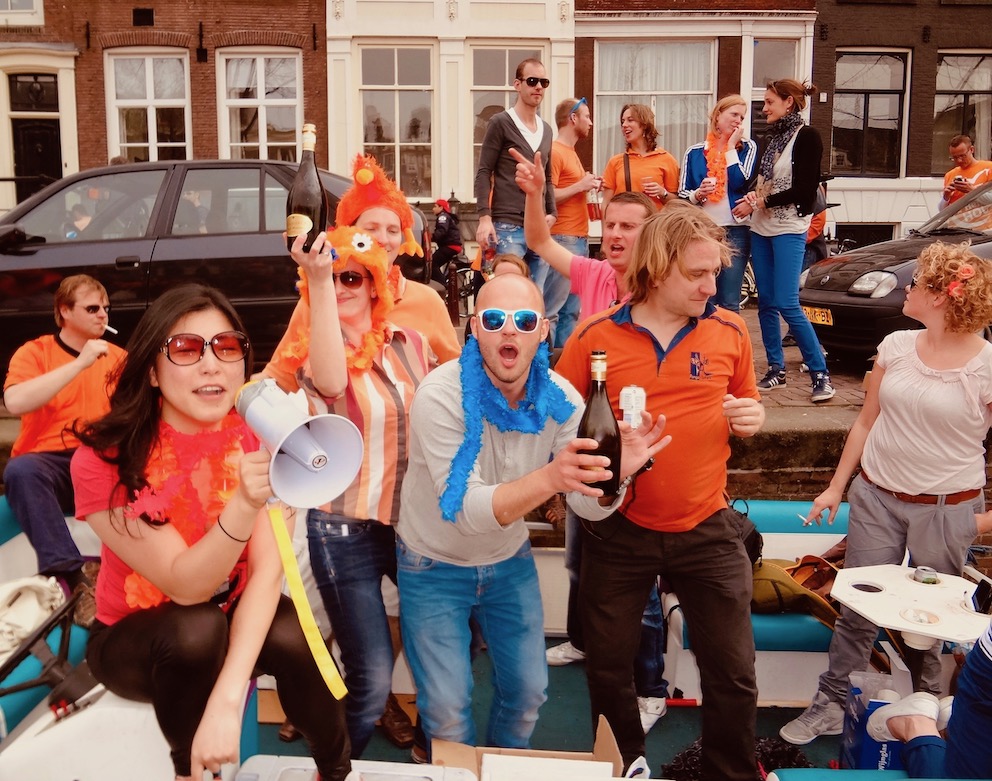 As a visual spectacle, I thought Queen’s Day was amazing. But as an experience, it certainly wasn’t for me. The alcohol binging tends to start mid morning, so by early afternoon most people are pretty smashed. On top of the swaying, jeering and general vomiting, you’ve also got the predominantly awful music, a relentless onslaught of ear-splitting techno music that blasts out of the city’s bars, restaurants and boats. 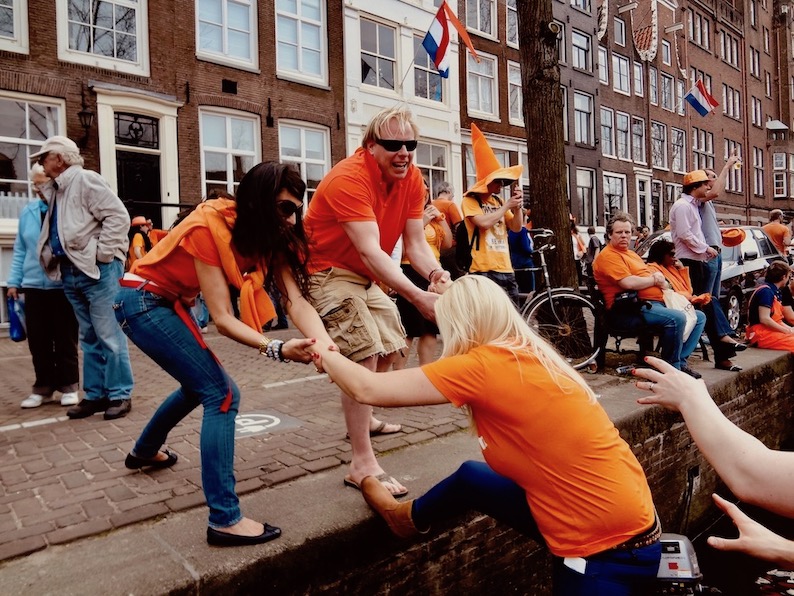 Nevertheless, I did enjoy watching the chaos unfold from afar. Ducking and diving between the masses, I would find discreet little spots here and there to observe all those amusing Queen’s Day moments. I saw a dude pissing into a bin and a man on a boat actually fall asleep whilst guzzling from a can of beer. And then there were several people who fell into the canal! The woman pictured above, aided by no less than four guardians, just about made it onto the street having jumped from her vessel. 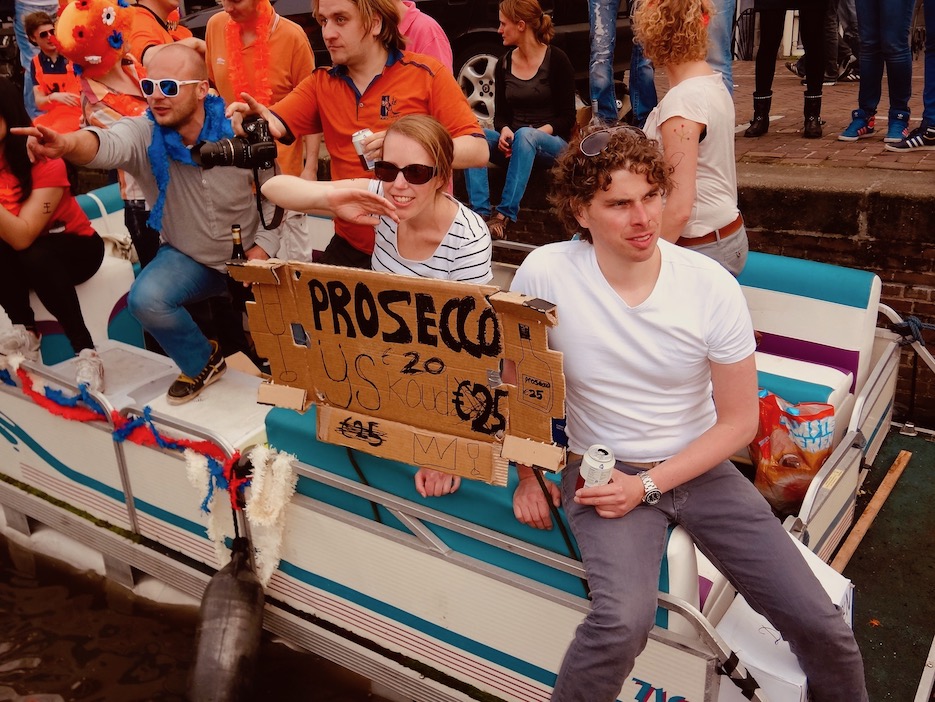 It was also funny to see how entrepreneurial people can get on Queen’s Day. Running out of alcohol? No worries, these guys have prepared boxes of Prosecco for such an emergency. Even better, they’re only €25 a bottle. A deal fit for a queen… 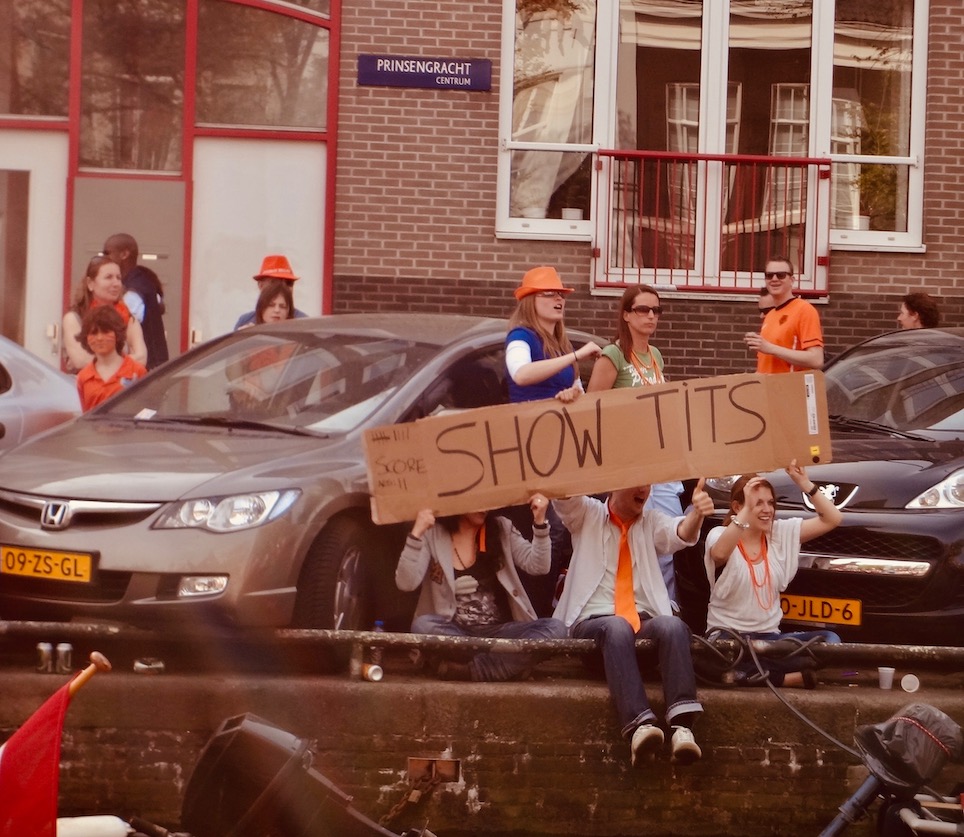 Anything goes on Queen’s Day it seems. On regular days of the year you might find it inappropriate to encourage passing strangers to flash their breasts. However, this is the queen’s birthday! So, y’know… 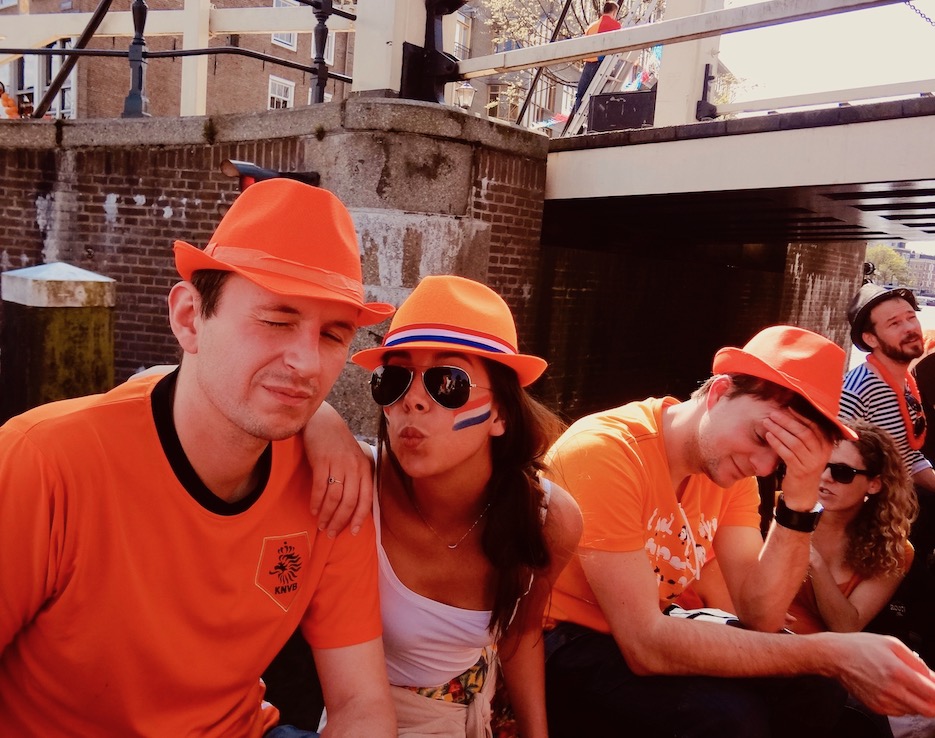 In 2012 my then-wife finally twisted my arm and talked me into celebrating Queen’s day on a private boat cruise with friends. Honestly, I’d been kind of dreading it. However, it actually turned out to be a decent day. We fell in with a good bunch of people and for a while the cruise provided a wonderful tour of the city’s canals and the gorgeous architecture. 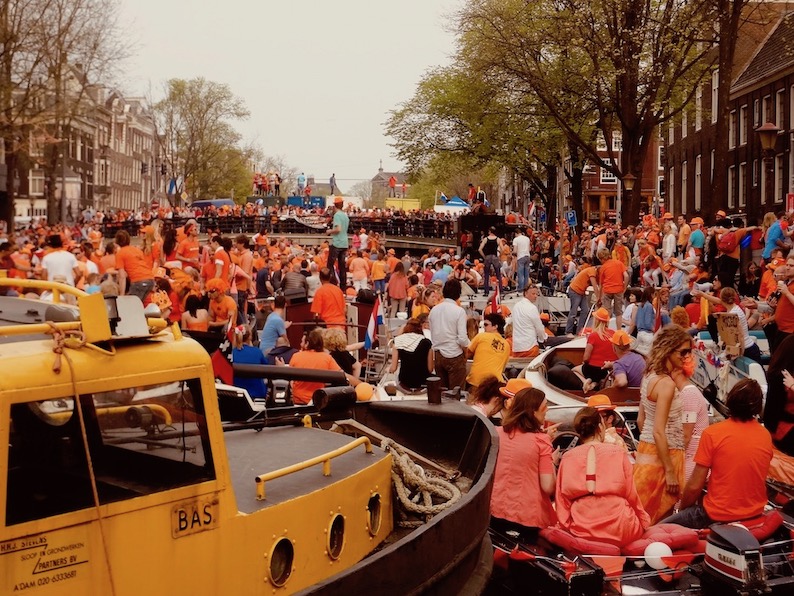 Slowly but surely the waterways got busier and busier and then, whoa, we’d reached total gridlock. There’s not much you can do when it’s like this. Other than perhaps scramble from boat to boat and head home for a cup of coffee. 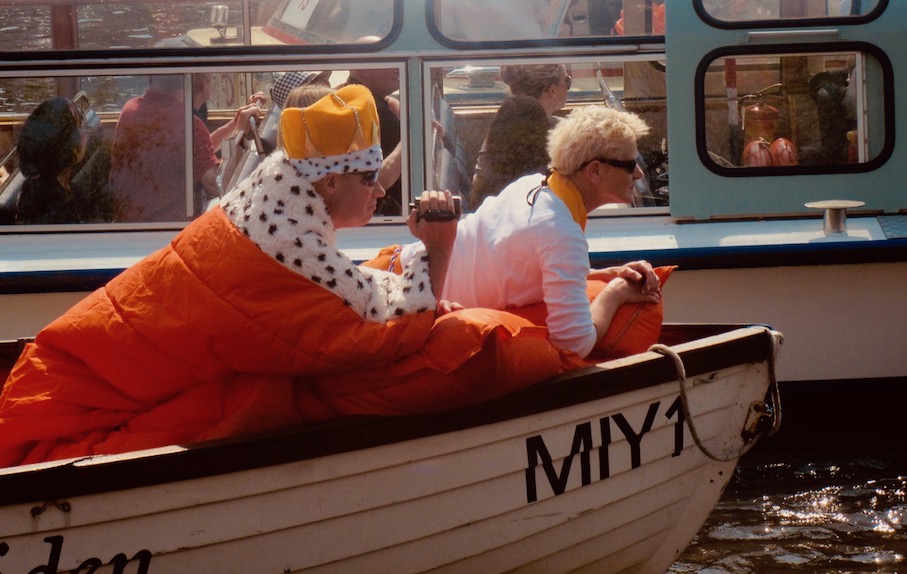 Alternatively, you can always whip out the camcorder and film the whole affair. There’s nothing like some crazy Queen’s Day canal traffic footage to excite the grandkids. 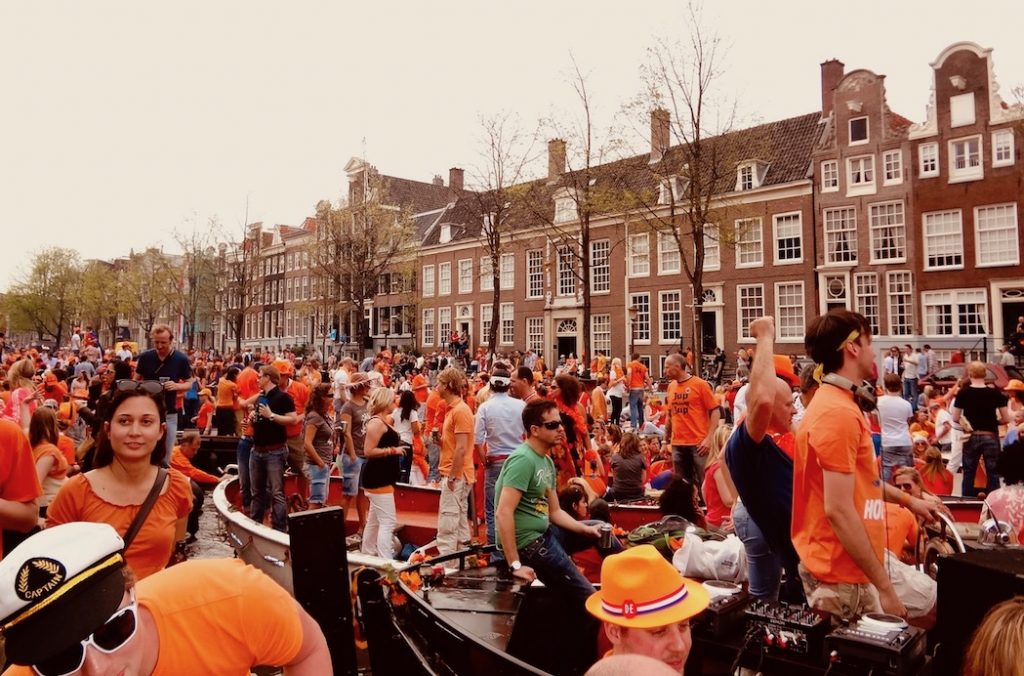 In 2013 the annual festivities underwent another reinvention when Queen Beatrix handed over to William Alexander, The Netherlands’ first king in over 120 years! And so Queen’s Day became King’s Day, although as fate would have it his birthday falls on April the 27th, just a few days before his grandmother’s. As a result, there’s been little change to the festivities, beyond the cosmetics of the name. If seeing Amsterdam in crazy party mode sounds like fun, then you should definitely catch a budget flight over to the Dutch capital. On arrival, just grab a beer from that bucket of Heineken, sample some local herring, put on an orange hat and do the day Dutch style. 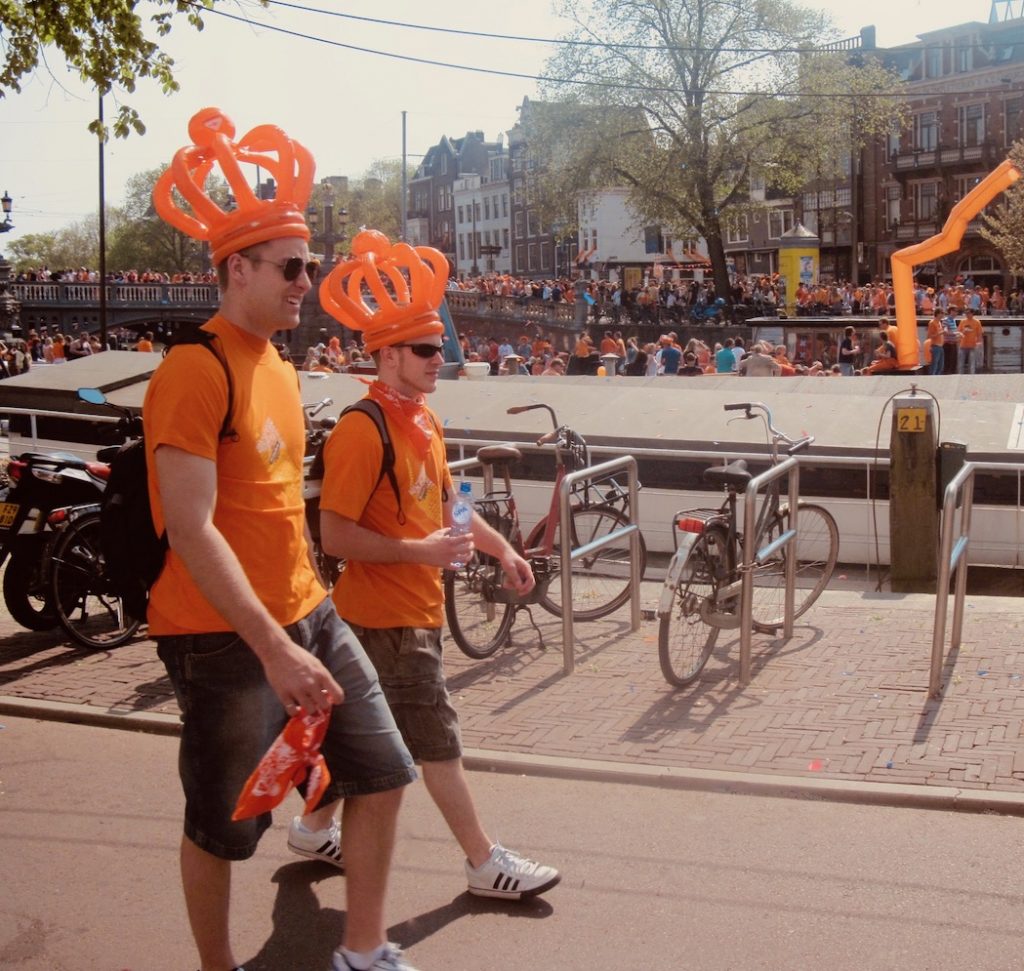