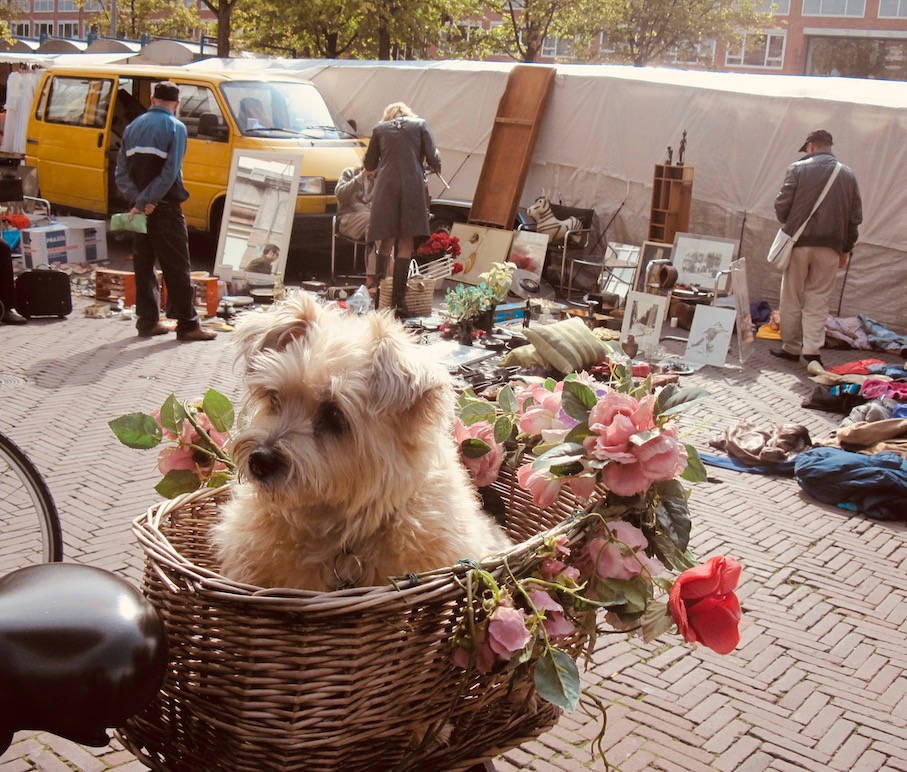 Have you paid a visit to Rembrandt House Museum? Knocked back a beer or two at The Heineken Experience? Seen the Dutch capital in party mode during Queen’s Day? Caught the latest exhibition at Eye Film Museum? Been to a gig at one of the city’s legendary live music venues? Great! Now check out my rundown of more cool spots around Amsterdam! I’ll kick things off with Waterlooplein, a traditional market square with a 130 year trading history. Back when I lived here this was one of my favourite exploring spots. 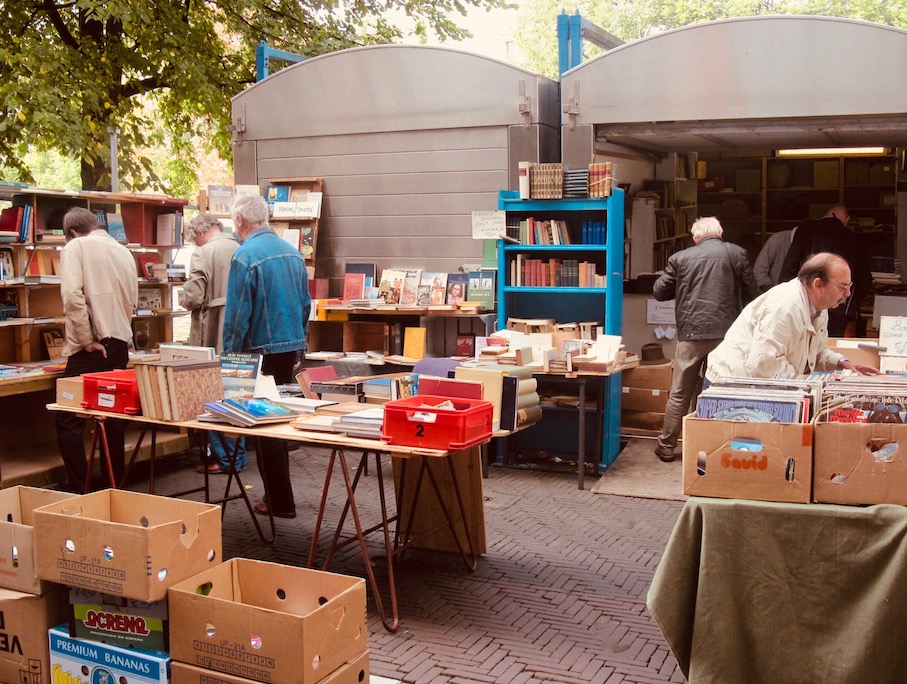 A book market on Waterlooplein.

Actually the flea market at Waterlooplein is a great place to see local life in action. The vendors here deal in all sorts, from antiques and vinyl, to jewellery, clothing, souvenirs and second hand homeware. Furthermore, if one gets hungry there are even a few food trucks offering a range of dishes from Italian and Lebanese to some signature Amsterdam frites. That’s chips if you’re British, fries if you’re American. I used to come to Waterlooplein to rake through this second hand book market. They also had boxes of black and white movie stills, hence I built myself quite the collection. For more info on Waterlooplein (Waterloo Square in English), check out their website. 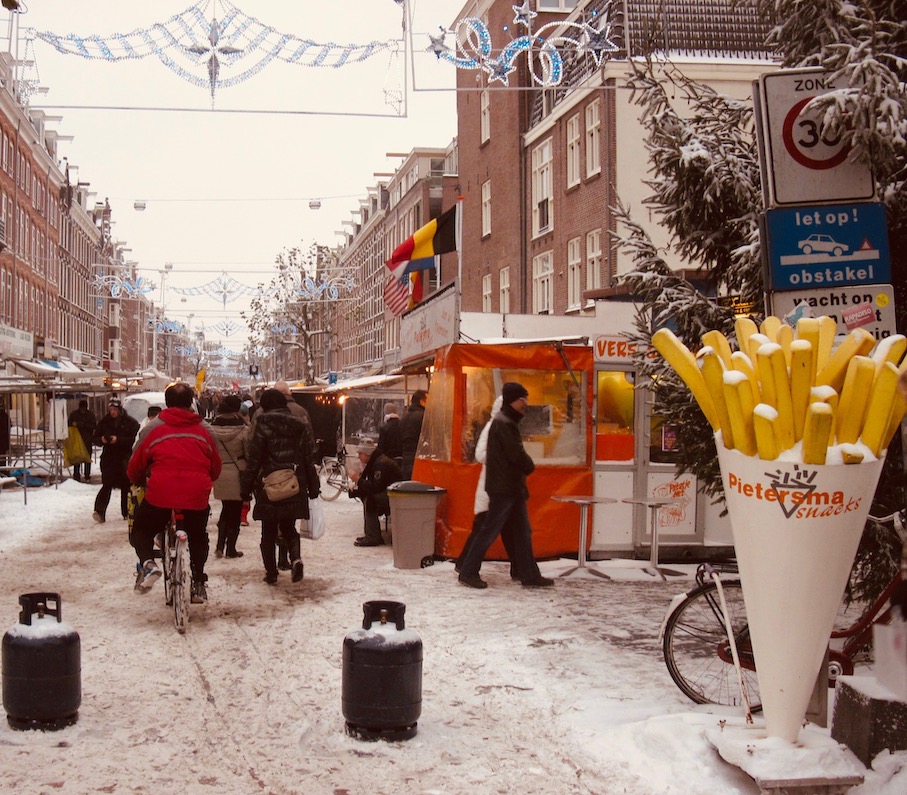 Amsterdam’s largest and most popular market area is Albert Cuyp. With over 260 stalls, you can get pretty much everything here. Plus it’s a great spot to try Dutch snacks. I used to love coming here for fresh herring served with pickles and chopped onions. Warning: Dutch herring is not everyone’s cup of tea! 😉 Albert Cuyp is open six days a week (closed on Sundays) between 09:00-17:00. For more, take a peek at their website. 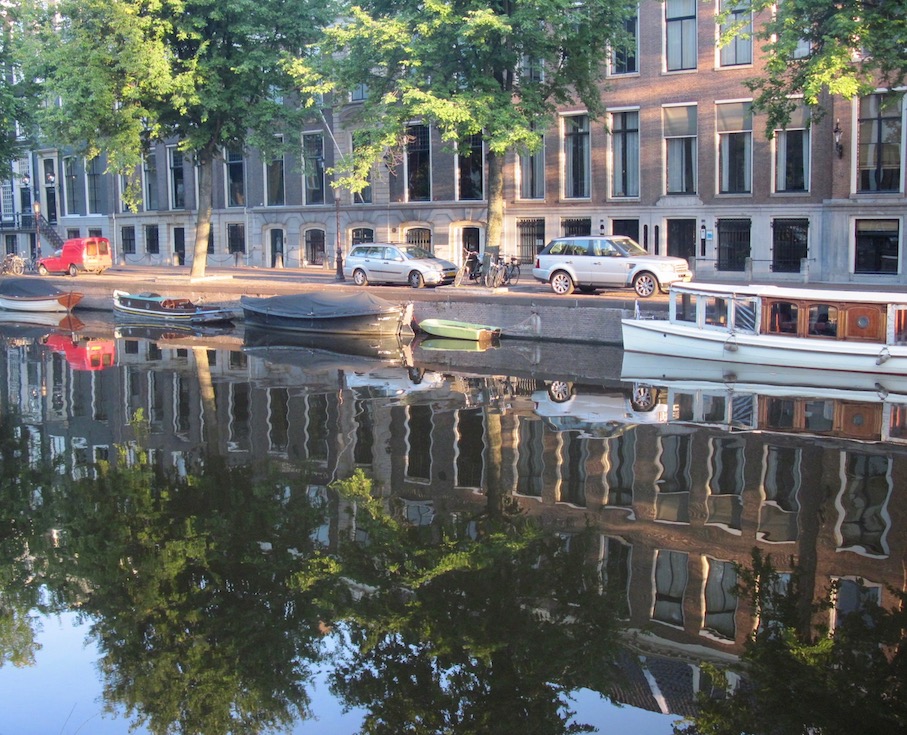 Some of the many cool spots around Amsterdam are set in and around the city’s delightful canals. It’s what everybody thinks of when they picture a walk around the Dutch capital and they certainly don’t disappoint. One of the most beautiful canals is Herengracht, a prestigious area with stunning townhouses overlooking the water. I was privileged enough to cycle along this canal every day on my way to work. 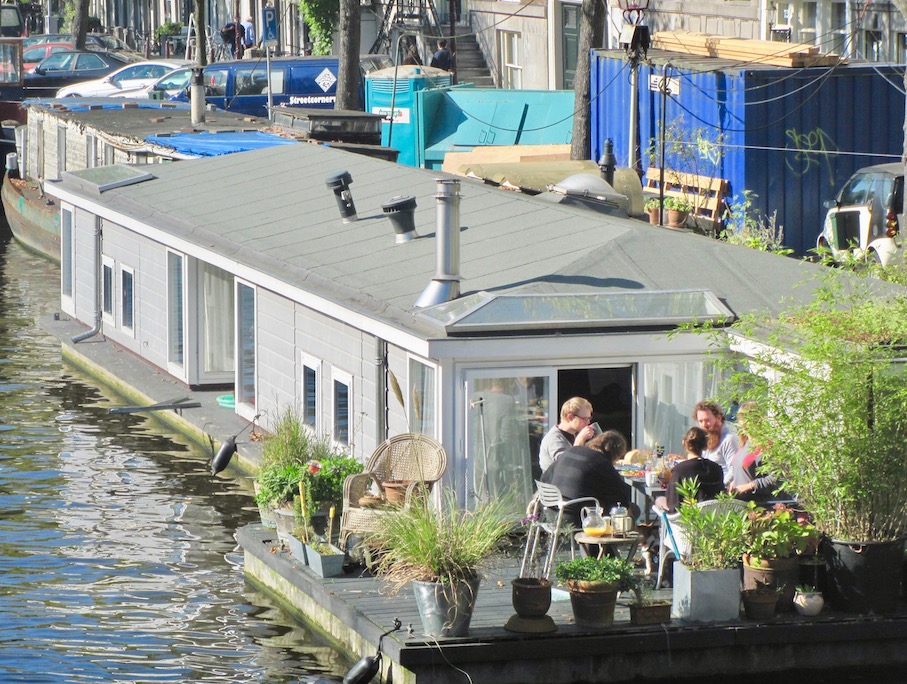 One of Amsterdam’s many canal houses.

You could easily spend hours working your way around Amsterdam’s waterways, admiring the house boats and canal residences. After all there are 165 canals in the city covering a whopping 100 kilometres. For a while I dreamed of owning a boat here and turning it into my own writing studio. For more on Amsterdam’s amazing canal districts, take a look this very cool article from luxeadventuretraveler.com. 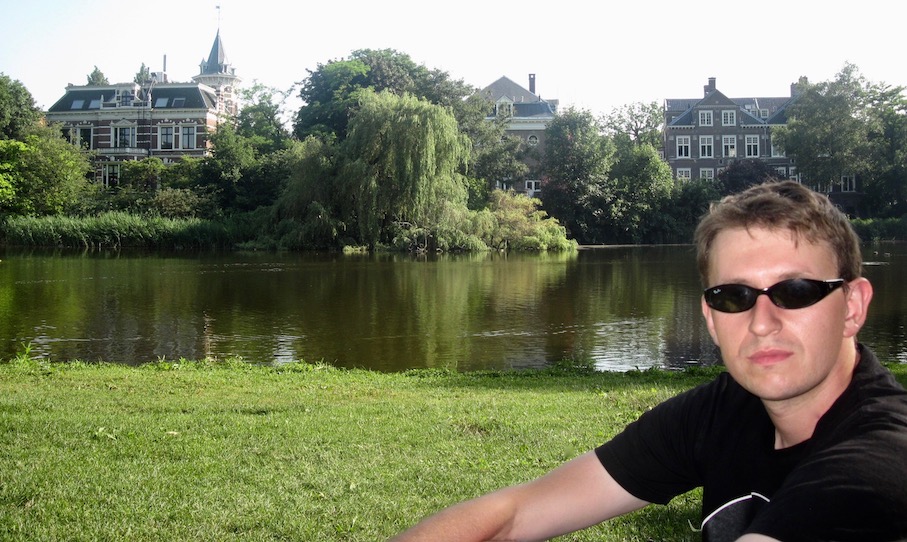 Similarly picturesque and free to explore is the beautiful Vondelpark. Named after the Dutch poet, author and playwright Joost van den Vondel, this large urban park features an open air theatre, a rose garden, bike paths and horse riding. Moreover, some of the city’s most popular cafes and restaurants are here, including The Blue Teahouse and Groot Melkhuis. 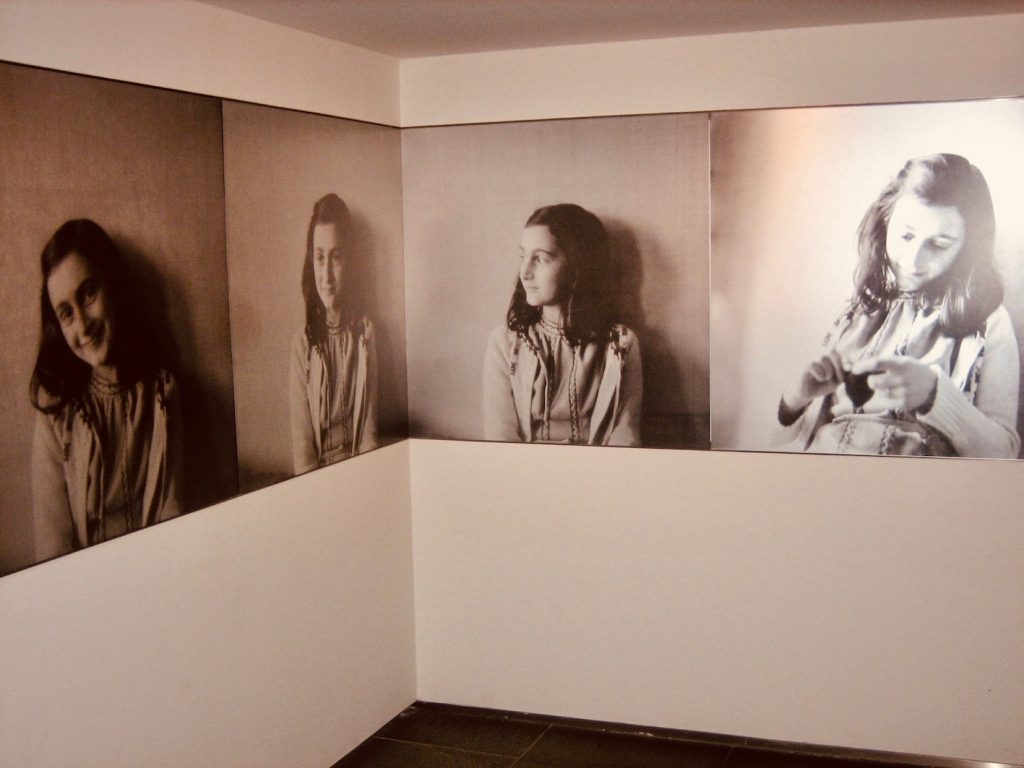 Amsterdam boasts a handful of truly world class sights. If you’ve only got the time for one, make it the sobering Anne Frank House. Most people are aware of the Anne Frank story, but it’s really something else to come here and see the house in which she and her family hid from the German military during the Second World War. The building is located on the lovely Prinsengracht canal and has been wonderfully preserved. 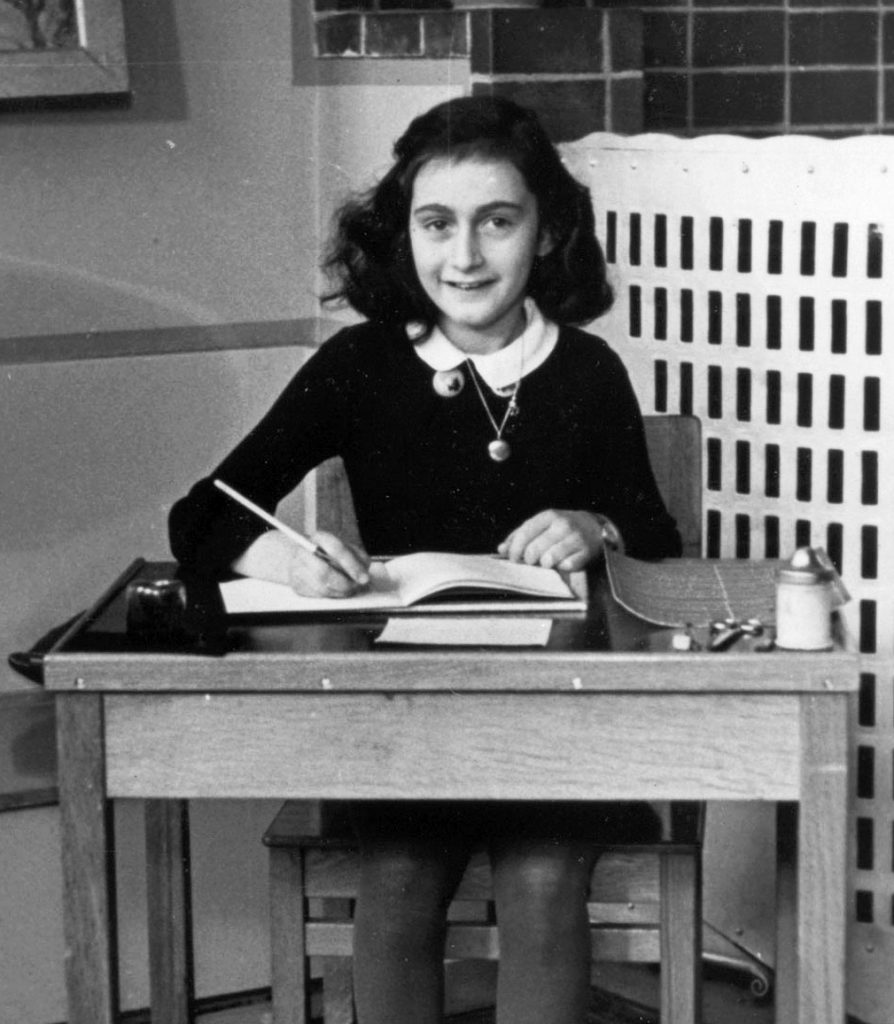 Her actual bedroom in the secret annex remains untouched, complete with the original pictures she decorated the walls with. The museum also does a great job of carefully detailing her everyday life here from July 1942 to her eventual capture in August 1944. And of course the original diary she so famously kept is also on display. For more info on the Anne Frank House, including opening times and ticket prices, head to the official website. 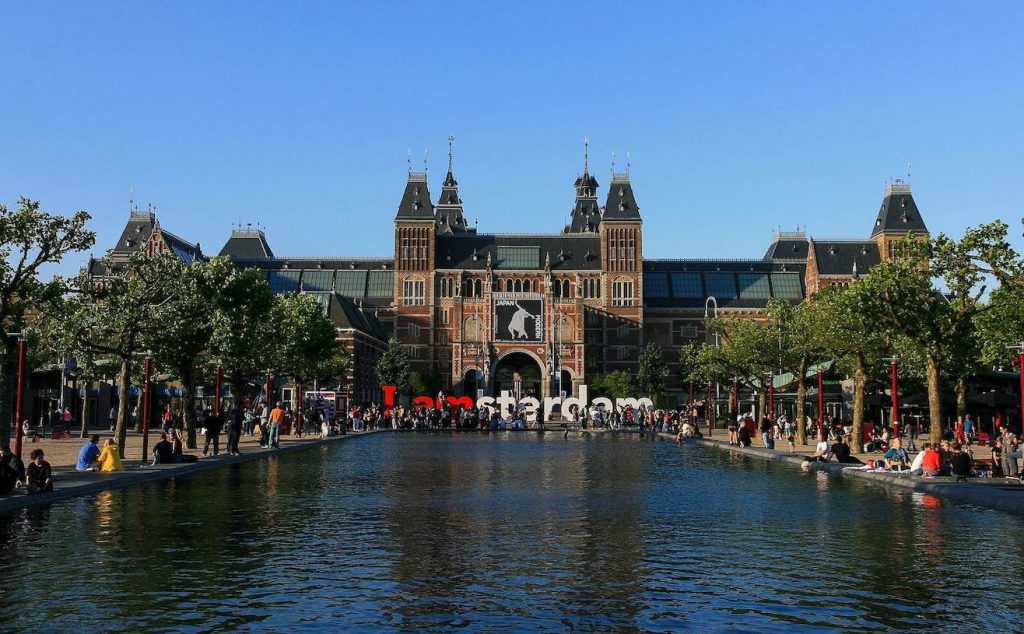 Another heavyweight Amsterdam attraction is the Rijksmuseum, a massive cultural centre dedicated to Amsterdam’s heritage of history and art. The scale of this place is just off the charts, if you’re really into art and the classical painters you could spend an entire day getting lost in its maze of corridors and galleries. They say there are around one million pieces of art here. As a result, prepare to roll up your sleeves and do battle with some serious crowds. For a deeper look into the history of the building itself and all the info you could possible need, here’s the website. 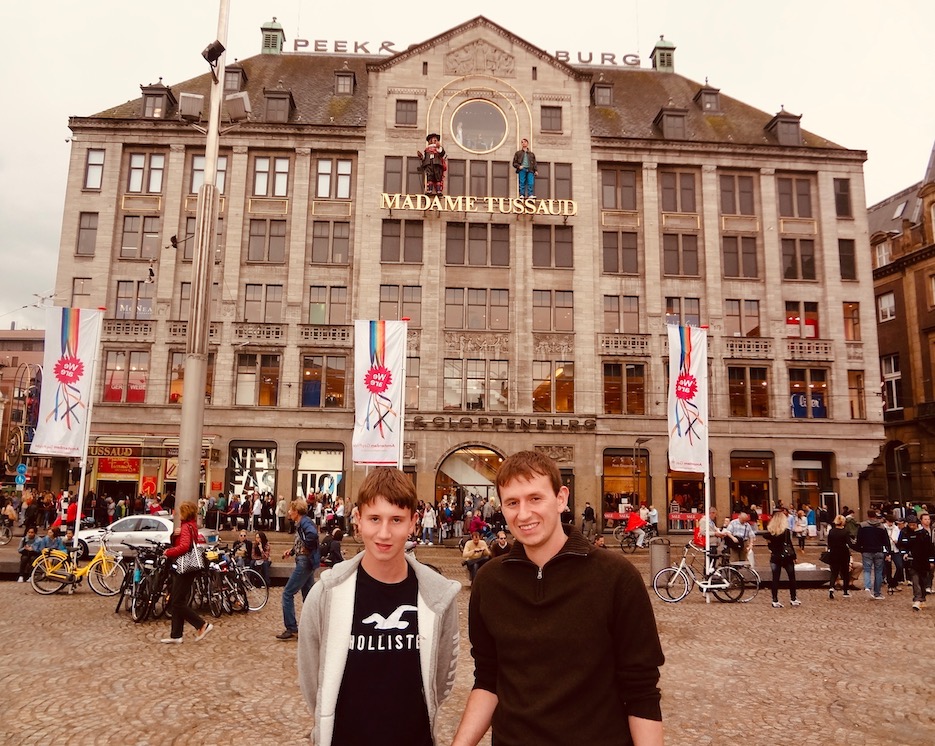 Whatever your itinerary is in the Dutch capital, you’ll almost certainly find yourself passing through Dam Square at least half a dozen times as you move between the sights. It’s a crowded, touristy spot and many of the streams of people here are simply queuing to get into Madame Tussaud. Which is pretty depressing. Nevertheless, it’s still worth stopping by as The Dam is also home to street performers, The National Monument and the impressive Amsterdam Grand Hotel Krasnapolsky. Additionally, it’s also a good entrance point to The Red Light District. 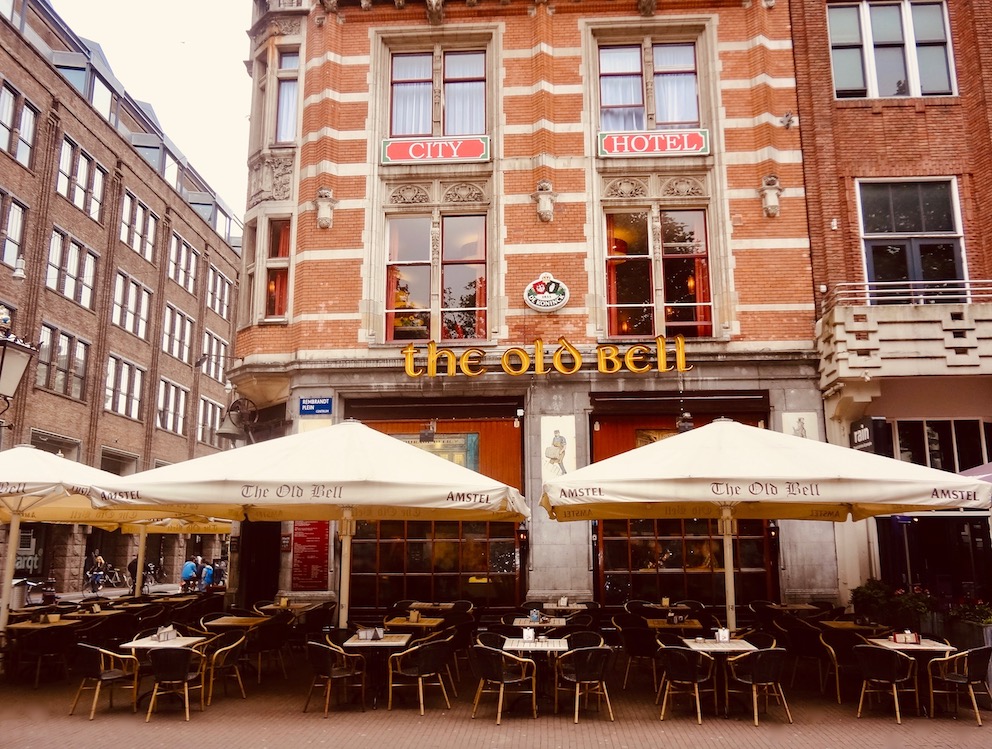 The Old Bell Pub on Rembrandtplein.

Amsterdam is blessed with amazing squares. My favourite has to be Rembrandtplein, which used to be a butter and milk market back in olden times. Today it’s packed with cafes and restaurants, including one of my favourite pubs, The Old Bell. Actually this is an English themed joint, complete with a painting of Lord Nelson and fish and chips on the menu. 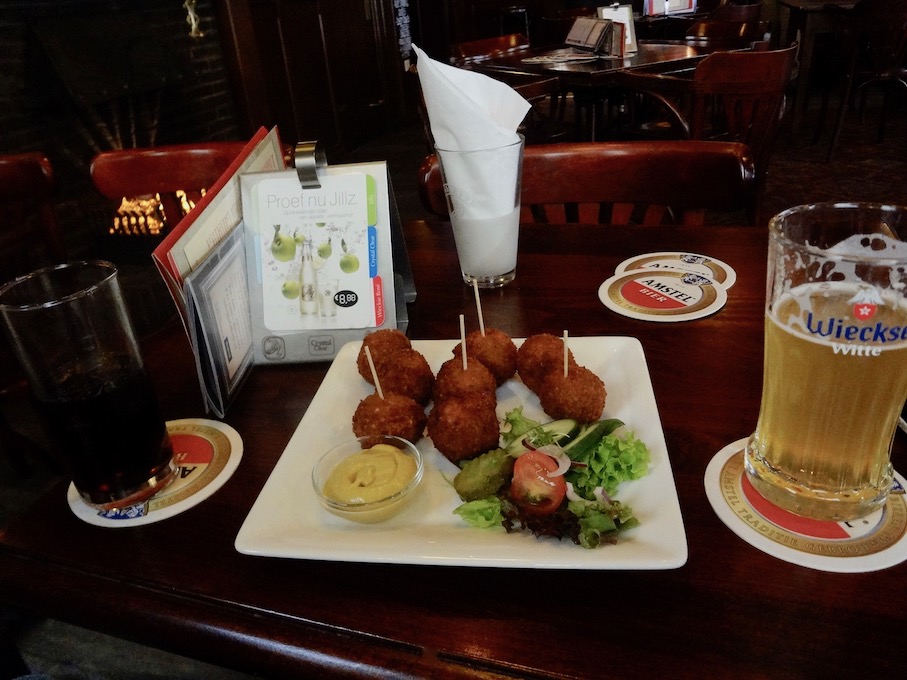 Bitterballen at The Old Bell Pub.

However, I tended to bypass the English ales on offer and go for a mug of Wieckse Witte. This was actually my Amsterdam staple for a while, a hazy 5% wheat beer with traces of lemon. Furthermore, if you really wanna Dutch it up, why not order a plate of bitterballen. This Dutch speciality is basically a deep-fried, bite-sized meatball. Crispy on the outside, soft and gooey on the inside, they usually come in batches of eight and they are great! 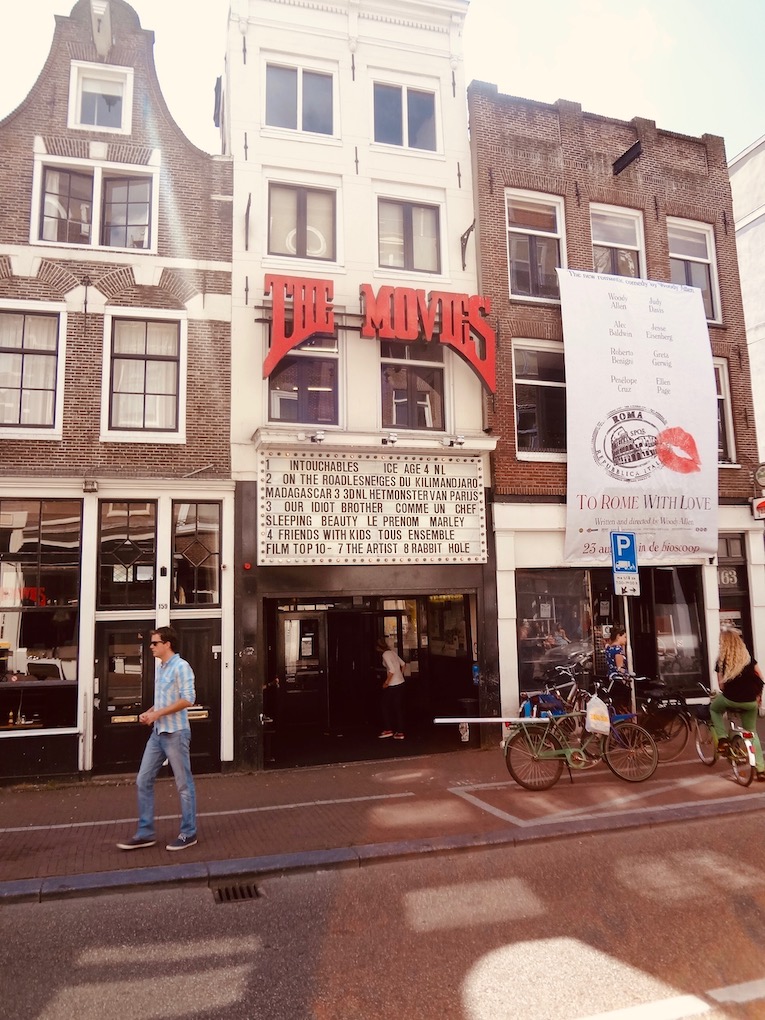 The Movies Cinema on Haarlemmerdijk.

Amsterdam is a five-star movie city in my opinion. There are cinemas all over the place, usually housed within grand old traditional townhouses. The most noteworthy of these is probably the art deco Theater Tuschinski, which looks like something out of Gotham City. Among the smaller, more discreet venues, I can recommend The Movies Cinema on Haarlemmerdijk. Apparently this is Amsterdam’s oldest cinema, having first opened its doors in 1912. Despite this, it always seemed so quiet here, probably because they focus on alternative film and arthouse cinema. 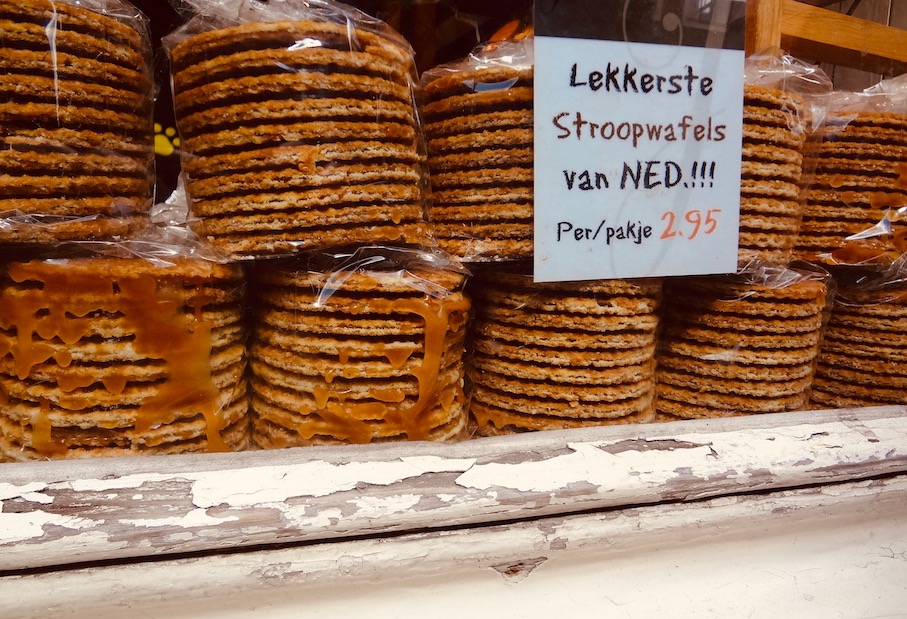 The Movies Cinema isn’t the only reason for a visit to Haarlemmerdijk, because this is one of Amsterdam’s cosiest streets. Packed with trendy cafes and restaurants, there are also a couple of old style bakeries selling fresh stroopwafels. I was addicted to this amazing Dutch dessert, which is basically two layers of baked wafer separated by a thick coat of caramel. 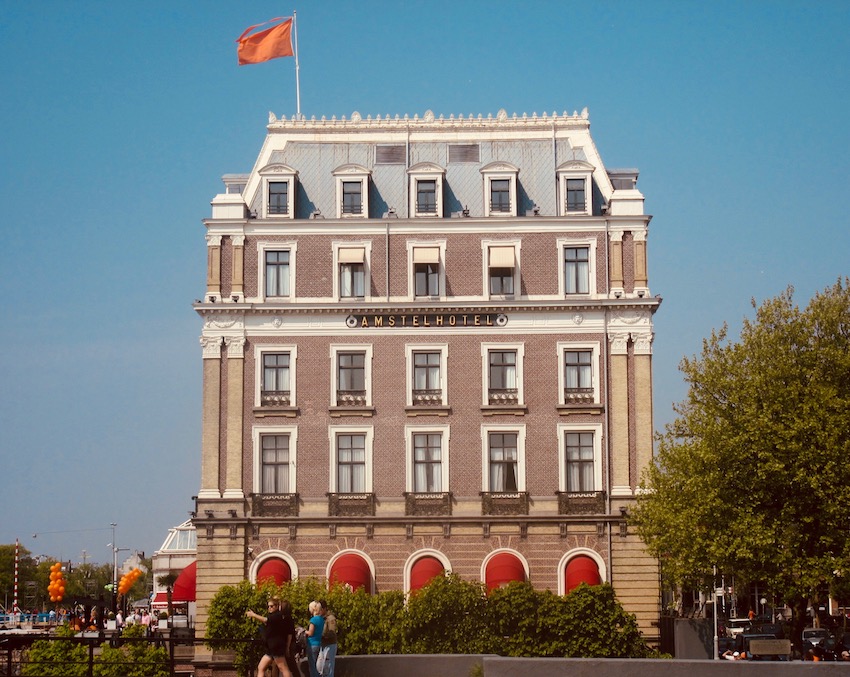 Those looking to treat themselves to some swanky Amsterdam lodgings should look no further than the historical Amstel Hotel. Dating back to 1867, this five star Dutch residence has hosted royalty and some of the world’s best known celebrities over the years. In fact, back during my interviewing days this is where I came to meet the Spanish director J.A. Bayona about his movie The Impossible. If you really do want to stay at The Amstel you’ll need to a) dig deep into your pockets and b) get organised, despite its great size they only have 79 rooms! 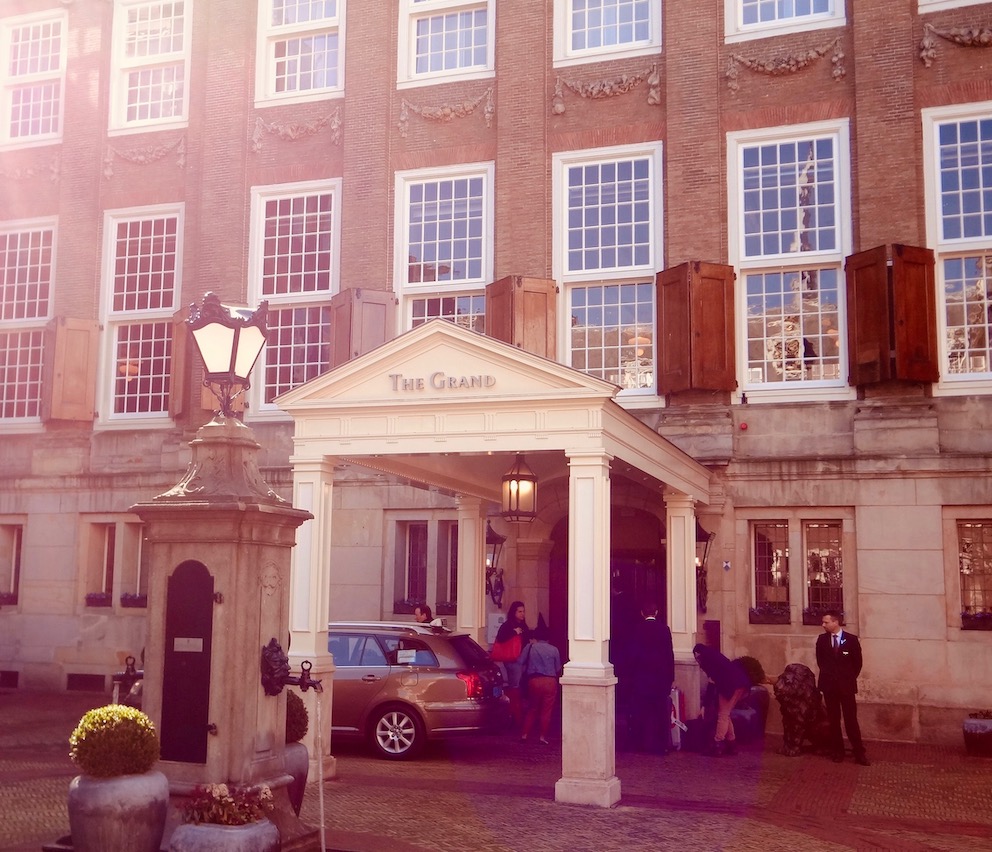 A similarly luxurious option that’s a little more affordable is Sofitel The Legend Grand Hotel. Formerly home to a 15th century convent, the Dutch Admiralty Headquarters and even Amsterdam City Hall, The Grand has a rich history. Consequently, this is another hotel that draws in some big names from across the world. 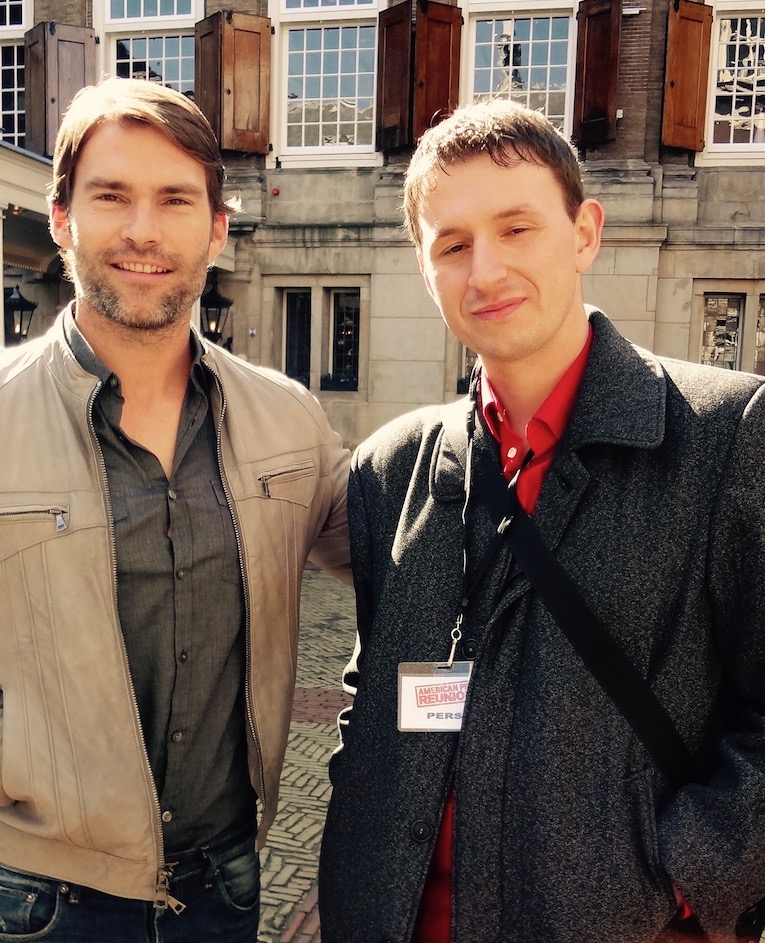 With Seann William Scott at The Grand Hotel.

In March 2012 the American Pie crew came to The Grand for a day of press interviews in promotion of the franchise’s latest instalment American: Reunion. It was a memorable day for me, as I was lucky enough to interview the directors, along with Tara Reid (Vicky), Seann William Scott (Stifler), Thomas Ian Nicholas (Kevin) and Eddie Kaye Thomas (Finch). If I ever make it back to Amsterdam, I’d love to do a night in The Grand.

Like this? Check out more of my articles focusing on cool spots around Amsterdam.

Why not also leaf through more pieces from around The Netherlands.