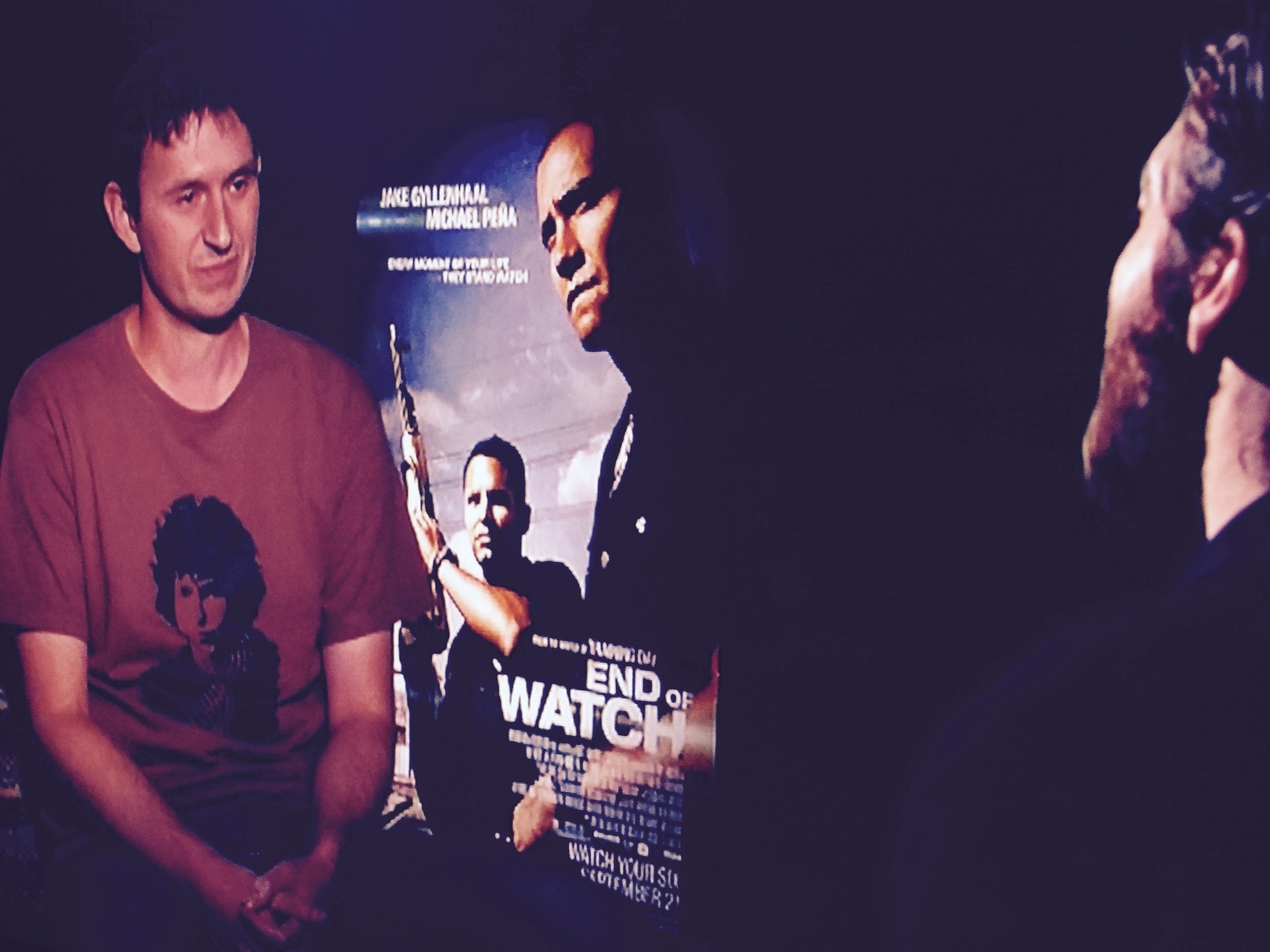 In June 2010 I arrived in The Netherlands with the notion of finally ‘settling down’. Young, in love and still just a little wet behind the ears, my girl and I had all the typical rat race dreams. Get the jobs so we could save money. Save money so we could get the house. Get the house so we could have kids. Have kids so we could be a happy family, a regular functioning cog in this big old machine we call society. What could possibly go wrong?

“He’s not shaking hands with anyone!” announced the chubby Asian guy from CNN. “They say he’s got a cold but who knows, maybe he’s just in one of his moods”. A general murmur of disapproval rippled around the room as this revelation sunk in. There was a cocked eyebrow from the mousy little BBC woman. A folded-arms-huff from the bespectacled, grey-haired man from some Nordic TV station I couldn’t pronounce.

As the new kid on the block I decided not to comment. Hell, I was just happy to be there. In fact, sitting in New York City’s Crosby Street Hotel waiting for my interview with Jake Gyllenhaal was certainly a surreal moment. At some point, coffee in one hand, a giant aniseed glazed donut in the other, it really hit me that this was my job! 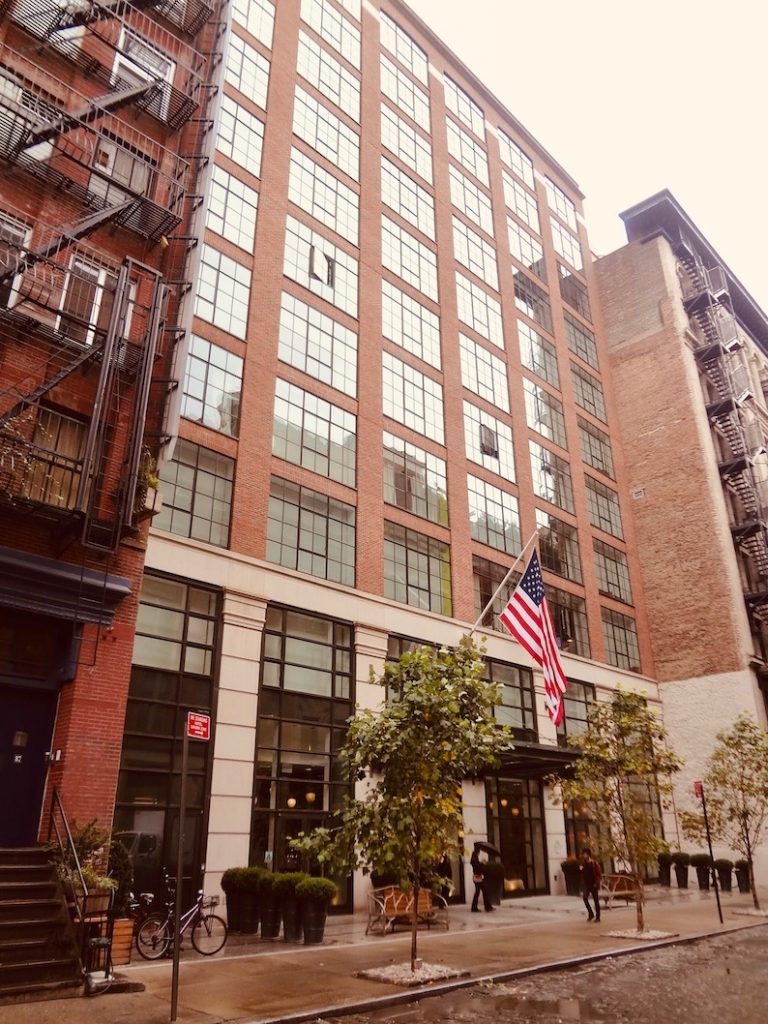 After years of teaching English around the world, I’d somehow managed to blag my way into a job writing and voice presenting movie news. And as if that wasn’t enough, I was now getting in on the interview action too. It was an unbelievable opportunity to indulge my love of cinema in a way most people could only dream of. The expression I had to pinch myself didn’t even begin to cover it.

The buildup to my arrival in NYC had felt like a dream. Back in Amsterdam I’d been sent off to a pre-screening of End of Watch, a gritty L.A. Cop flick in which Gyllenhaal starred opposite Michael Peña. The movie was pretty good, a winning combination of ferocious action, sharp dialogue and fully-fleshed characters the audience actually gives a crap about. I’d been a huge fan of Gyllenhaal’s for years, going all the way back to his child star days in City Slickers and A Dangerous Woman. 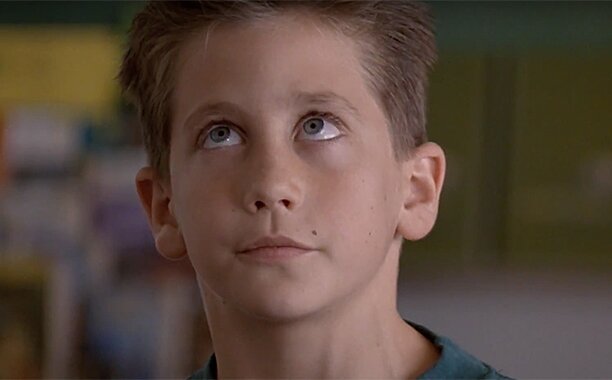 There was so much I wanted to discuss with him. I wondered how it really felt to grow up in a moviemaking family and I was desperate for details of his time on the set of Brokeback Mountain with the late Heath Ledger. Furthermore, I would’ve loved to hear about what it was like being directed by Davie Bowie’s son Duncan Jones in Source Code. But alas I would only be getting ten minutes in Jake’s company, hence the focus of our conversation would be strictly on End Of Watch. You can’t have everything I suppose. 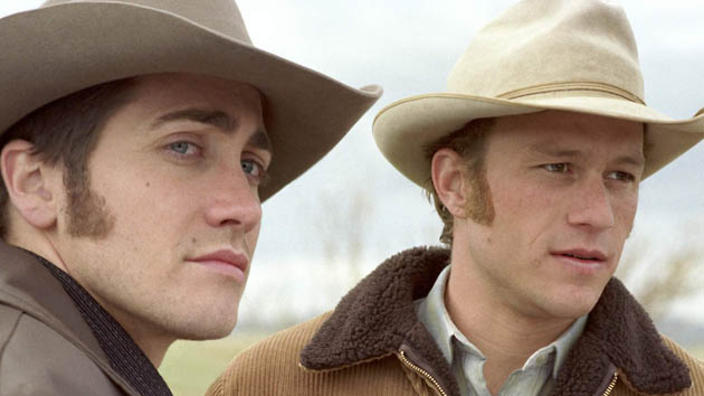 “This is Leighton Thomas from The Netherlands, he’s with Old Harbour Productions”. The spacious interview room was a decadent man cave decked out in framed movie posters, leather sofas and lamp-laden shelving. At the far end, to the side of the popcorn machine and minibar, sat a giant mahogany pool table that had been abandoned mid game. And then I caught sight of Jake himself, sat at the back of the room in a brown armchair stretching his limbs. Behind him, a posse of unknown men munched on sandwiches at a long, glass table. None of them paid me any attention whatsoever.

“But it’s not so bad you know, all I gotta do is sit here and talk”.

“Hi” I said tentatively, dropping into the chair opposite Jake. “Hey” he replied with a throaty sniff, reaching for the cup of hot something on the coffee table beside him. “How are you feeling?” I asked, as a lady appeared out of the shadows to hook me up with a microphone. “Ah, I’m a bit under the weather. But it’s not so bad you know, all I gotta do is sit here and talk”.

With a full head of scraggly hair and an equally fulsome beard, this was not the Jake Gyllenhaal I’d expected. In fact, he was a million miles from the clean cut boy-next-door handsomeness of his many movies. Nor was it anywhere near the shaven-headed tough guy look he’d adopted for End of Watch. Was this really Jake Gyllenhaal? Or had the studio craftily drafted in a lumberjack lookalike while the real Jake lay bedbound somewhere with the flu? “Ok Leighton… you have speed in three, two, one…” And we were rolling.

Before my trip to New York, I’d spent hours in the office watching archive interview footage on the company server. But as interesting as they were, I found myself frustrated as to how wasteful and uninventive most of the interviewers had been with their precious time. It was really perfunctory stuff, with a hundred and one “What was it like working with {insert actor’s name here}?” and a zillion “Do you see any similarities between yourself and your character?”

With the star in question having to do 40-50 interviews a day, it was no wonder they often got tired, bored and irritable. As a result, I promised myself that I’d do my best to come up with something different. I wanted to surprise Jake, find some questions that nobody else would think of and get the interview off to a good start. Thus I began with:

“I heard that you spent months researching the life of an L.A. cop. But be honest Jake, how much of that time actually went on perfecting the wedding dance scene?”

He looked at me for a second, a wry smile forming at the sides of his mouth. And then he burst into laughter, his eyes closed for just a moment, his top row of front teeth sparkling in the dimness. 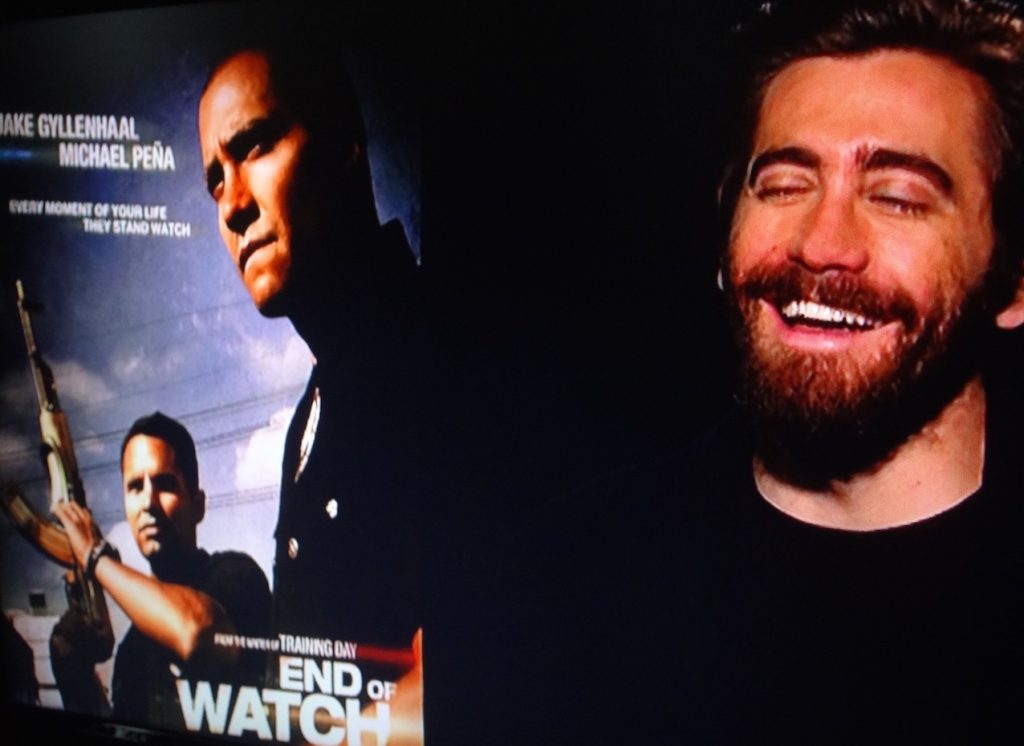 “You know that wedding dance… we spent hours on that… getting it JUST right…. and it was clear from the beginning that I obviously have a distinct sense of style and rythmn and… ha ha… NO… I think we just nailed it in like twenty minutes. The rest of the time was spent learning what it’s like to be an L.A. cop”.

“This is the world we live in. You know, we’re all animals and sometimes we tend to focus on the visual… you know… what we see. But I’m not interested in all that. I just try to choose work that speaks to me and find characters and storylines that are interesting. All the rest… the hairstyle… putting on a bit of weight… who’s dating who… it’s all secondary to me. As the character in the play I’m doing now says: It’s all much of a muchness”.

“As ever these things get blown out of proportion. Sometimes people forget that actors are often just thrown together. Maybe you haven’t worked together before and maybe you come from different backgrounds. And basically you’re expected to just click and become best friends. Life doesn’t always work like that, you know? In our case we just had to find our way of doing the job… and in the end we did. There really wasn’t any more to it than that”. 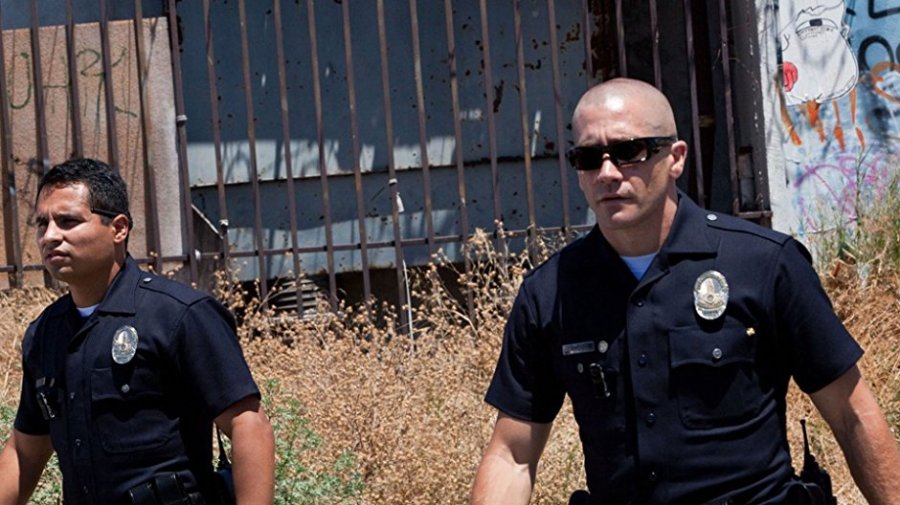 There were a few more questions, but with the passing of time I honestly couldn’t say what they were. “Thank you Leighton!” said the woman, as Jake leaned back in his chair with a manly grunt-stretch. “Hey, did you like the movie?” he asked me, locking his eyes firmly into mine. “I did!” I confirmed enthusiastically, mightily relieved that I wasn’t in a situation where I had to lie. “In fact, I think it’s the best thing you’ve done since Brokeback”. He raised both eyebrows at this, pursing his lips together thoughtfully. “Thanks man!” he said and with a long sniff shuffled over to the table to claim one of the few remaining sandwiches.

“Hey!” she said with a side glance, her hair swinging back and forth”.

“Leighton Thomas, End of Watch!” called the scruffy man in the back office. It was time for me to pick up my flash disk, so I jogged out of the press lounge and down the corridor to claim my treasure. As I went, Anna Kendrick suddenly emerged out of a side door in front of me. She had a petite Gucci handbag slung over her shoulder, a cup of coffee clutched protectively in both hands. “Hey!” she said with a side glance, her hair swinging back and forth as she strode past me. “Here you go,” said tech dude and I popped the flash disk into my pocket.

Exiting the hotel into the chilly New York afternoon, I realised that I now had the rest of the day to myself before my flight back to Amsterdam the next morning. Subsequently, I set about planning my afternoon. I was gonna grab a shake at Tick Tock, my favourite NYC diner. Afterwards, I’d take a walk out to West 18th Street for some browsing at Academy Records. 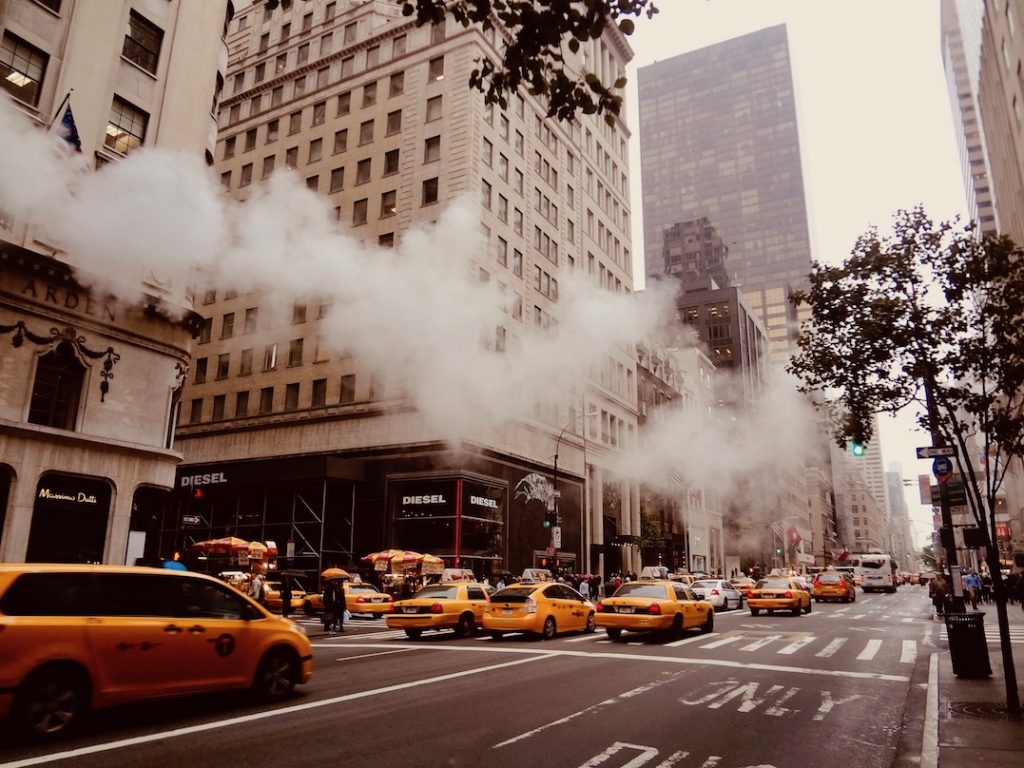 For dinner I’d decided on pizza on Bleecker Street with Simon & Garfunkel on the headphones. Finally, I’d take in the evening’s Manhattan views from the top of The Rockefeller. I remember making my way down the sidewalk as a flurry of yellow taxis zoomed past, one or two of them shrouded in the billowing smoke of a nearby drain. I recall wondering if, professionally at least, this autumnal New York afternoon was as good as it gets.

Hanging out on Essaouira Beach, October 2008. It w