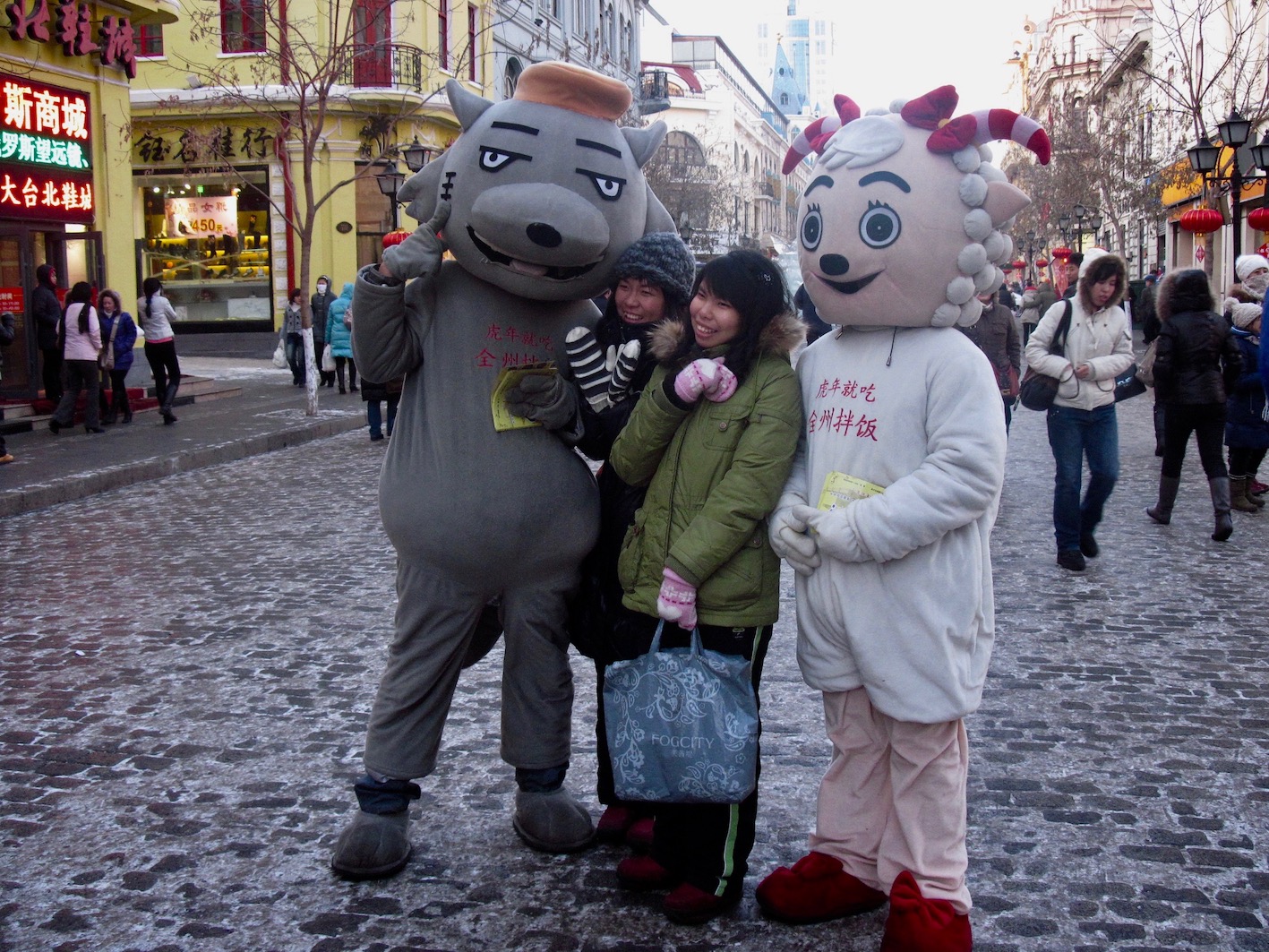 February 2010. I clearly remember my boss’ reaction when I told her I was going to Harbin for Chinese New Year. “Oh, really? You shouldn’t go there, it’s very cold!” Of course I told her all about the city’s stupendous Ice & Snow Sculpture Festival, the atmospheric Jile Temple and the grisly Siberian Tiger Park. But it all fell on deaf ears, after all the place was “cold”.

She certainly wasn’t wrong about the weather! After a disastrous night at one of Planet Earth’s most miserable lodgings (Little Fir Hostel), I subsequently relocated to a four star hotel on Zhongyang Street, where daily temperatures hovered around minus fifteen. This, it turned out, was an excellent place from which to discover some cool spots around Harbin. 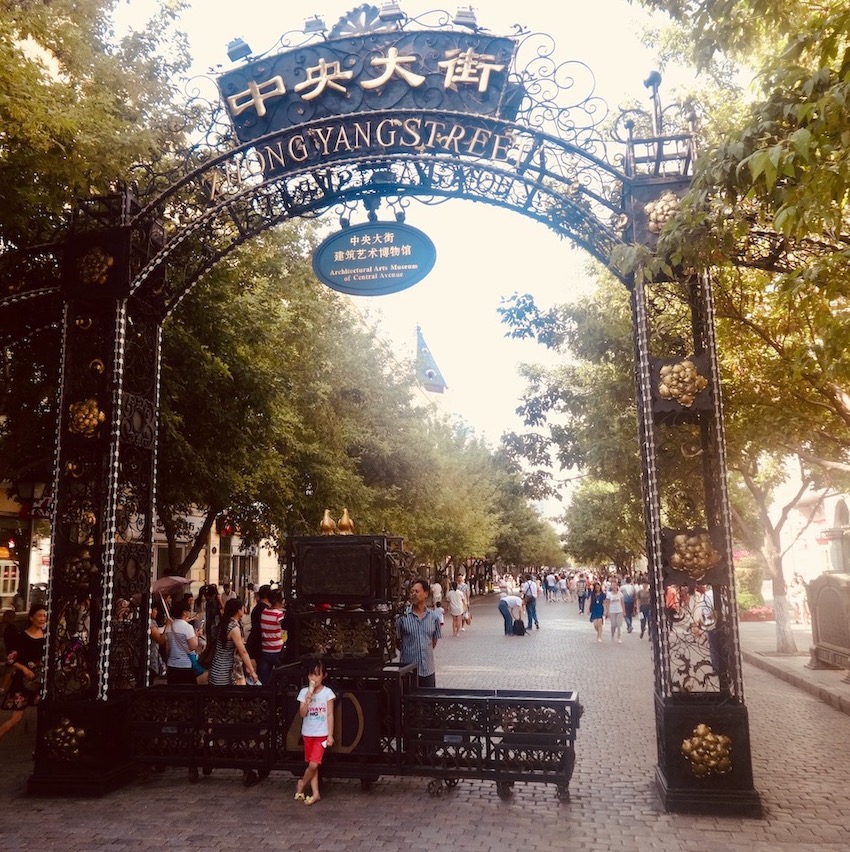 Zhongyang Street is a cool place for a whole host of reasons. First up it’s fully pedestrianised, so there are no car fumes, getting honked at or having to fear for your life as you stroll. 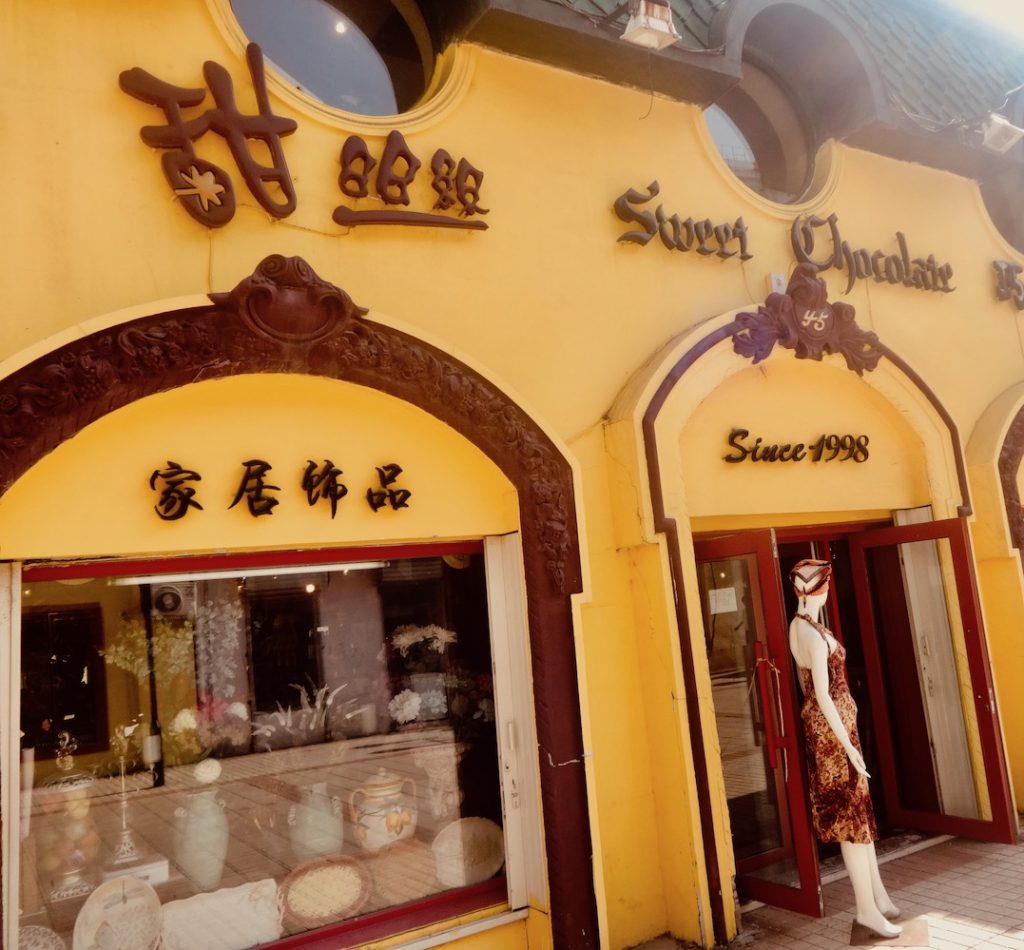 As a result, you can fully relax and just cut across the road to check out that cutesy boutique. I cannot overstate what a rarity this is in China! 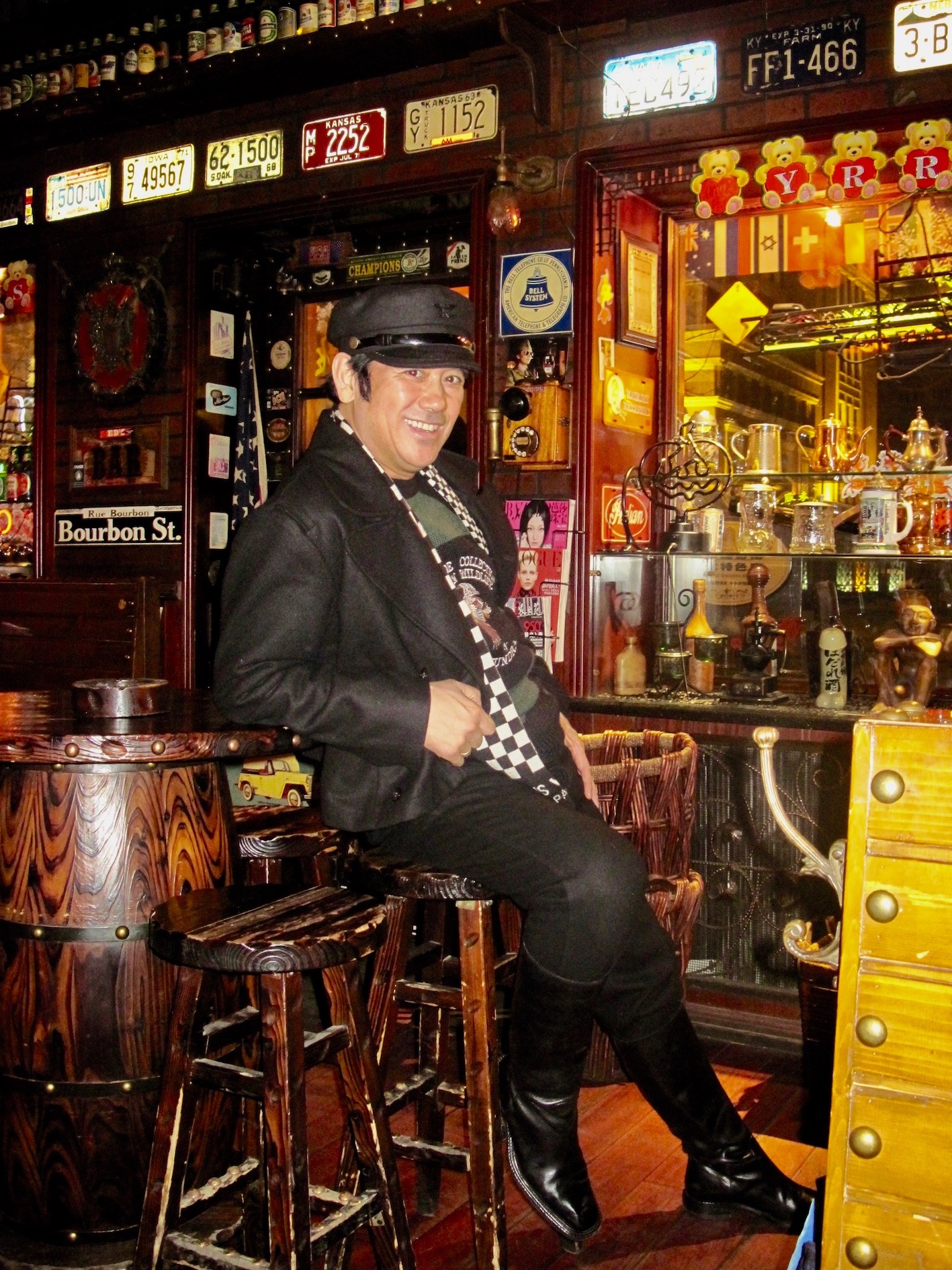 Zhongyang Street is also home to a bunch of trendy cafes and bars, which are great to duck into when it feels like your toes have stopped working. My favourite drinking spot was the bizarre USA Bucks Bar, owned by this colourful character, a local millionaire. 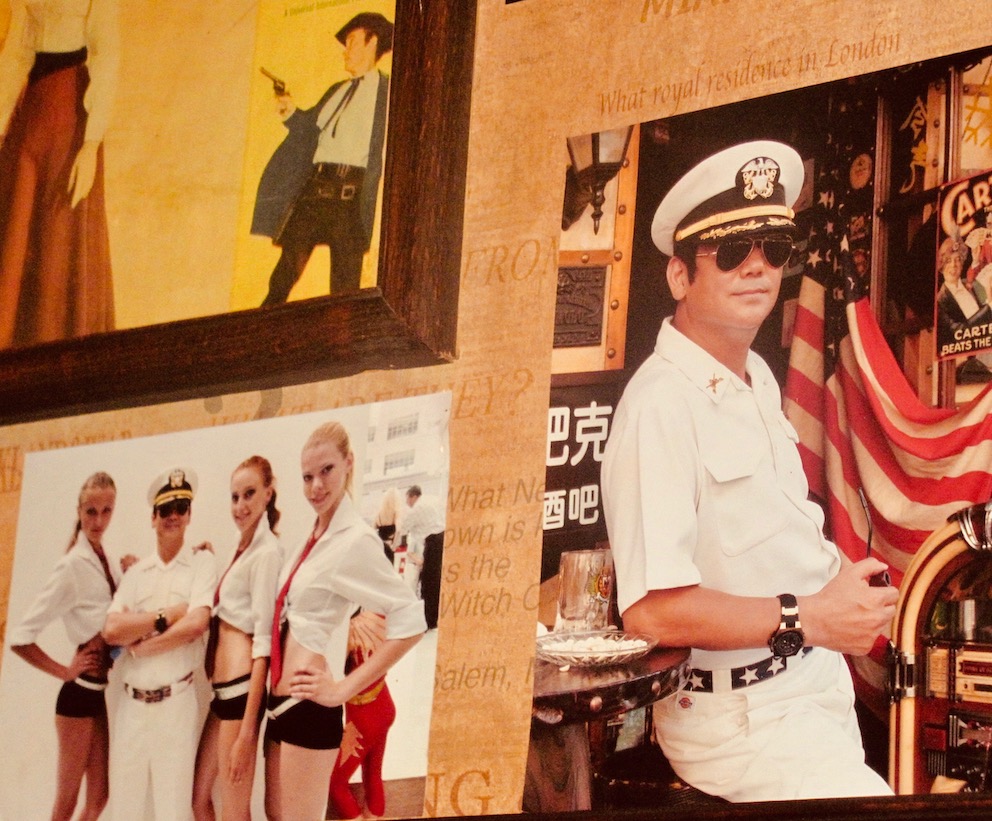 The owner had decked the entire place out with framed photographs of himself jetting around the world on private planes and boats. Invariably, he had a supermodel or two attached to each arm! 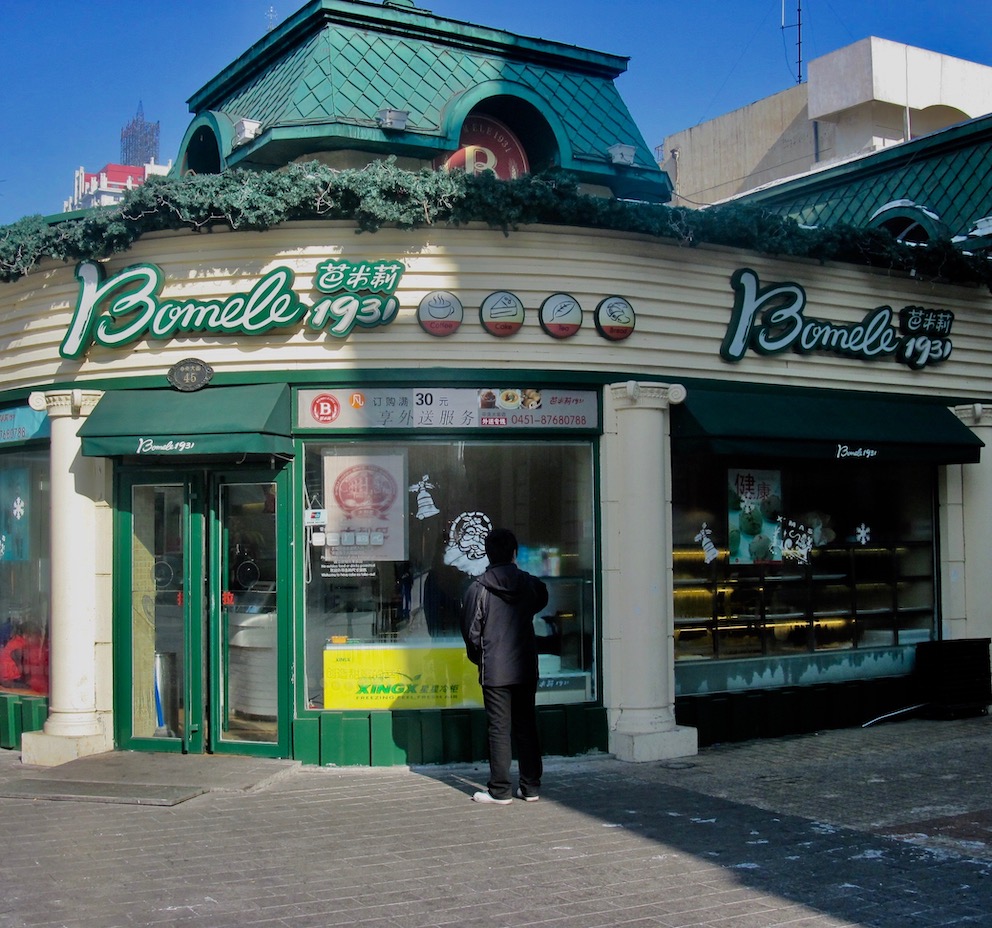 My favourite breakfast joint was also on Zhongyang Street. Bomele 1931 really has it all, from coffee, cakes and sandwiches, to ice cream, pizza slices and baked bread. I came here every morning during my stay and loved it, especially the comfy chairs and dependable Wifi. 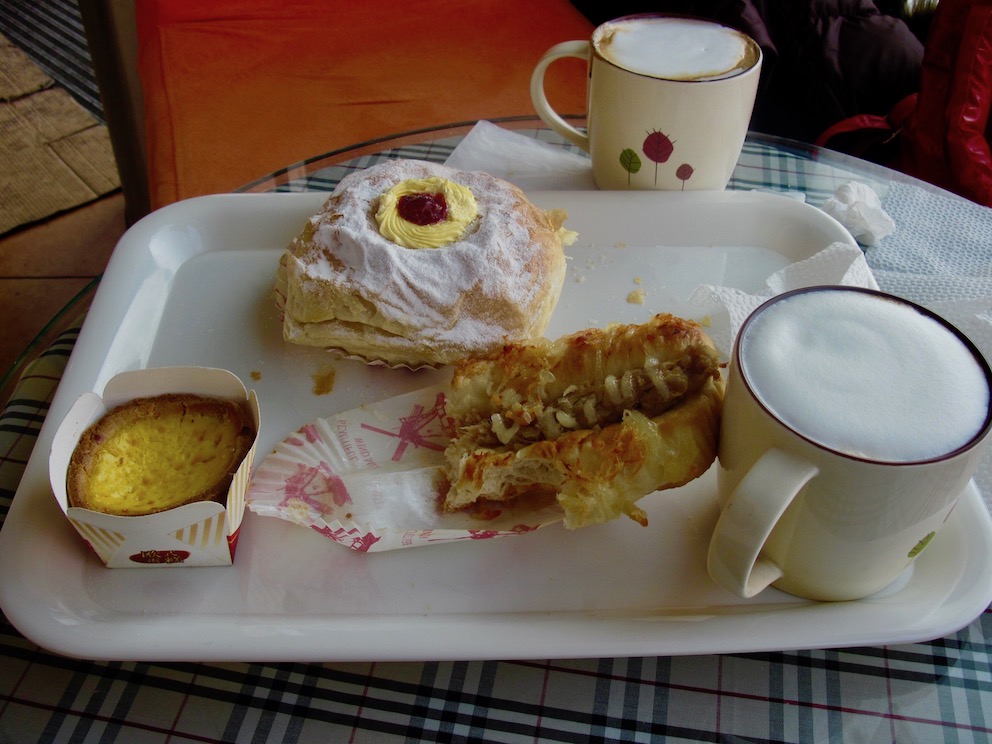 Just bear in mind that Bomele 1931 is a Chinese style bakery, so expect everything to be sweet (even the savoury stuff!) and for a lot of their products to be filled with dreaded meat floss! 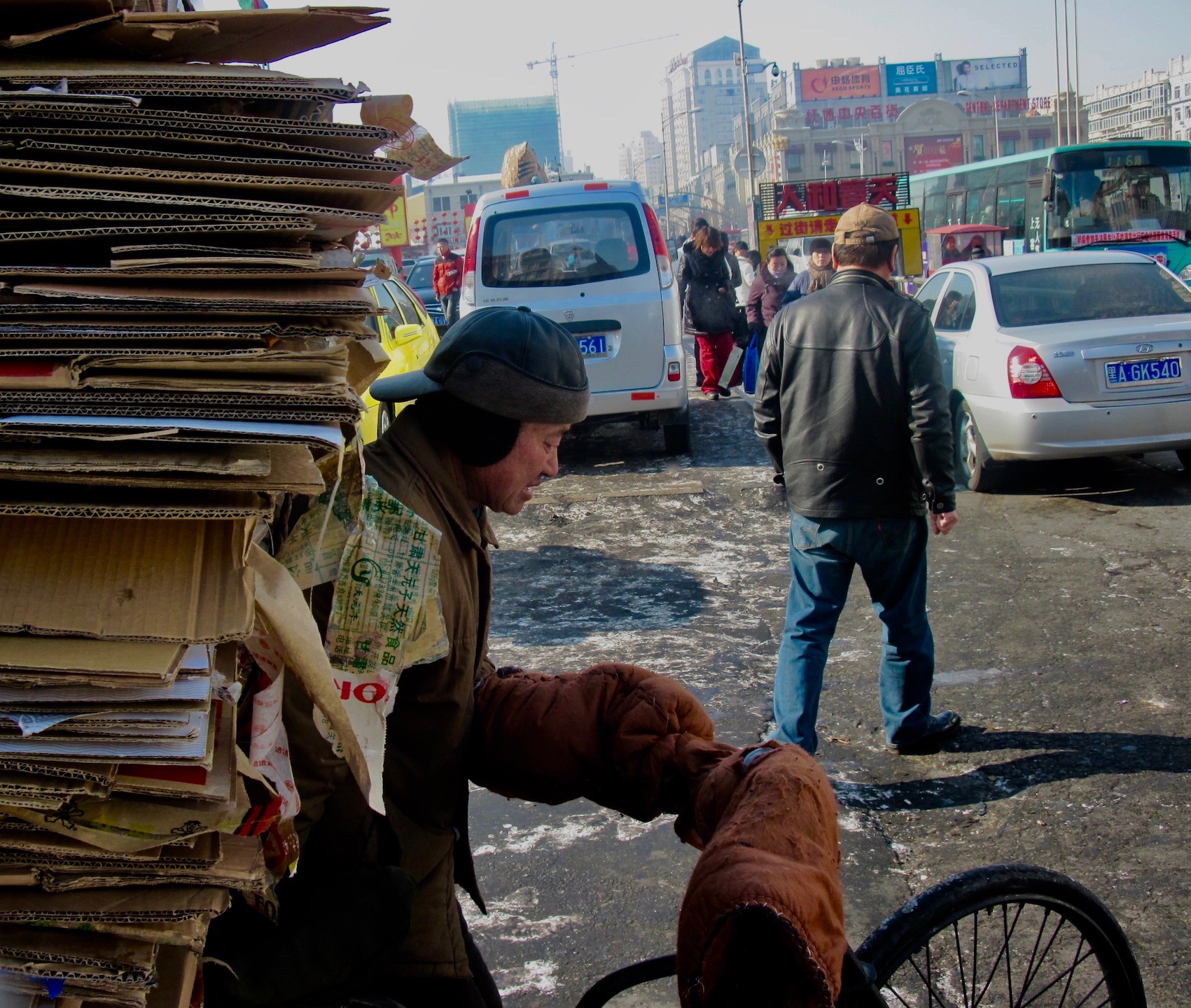 Harbin is a bustling city of five million people. Somehow though it feels way more manageable than other metropolises of its size. Maybe because a good chunk of the population hides away from the cold indoors. Nevertheless, there are still some typically chaotic roads like Zhaolin Street, where cardboard stacked bicycles like this one skid between cars, buses and pedestrians. 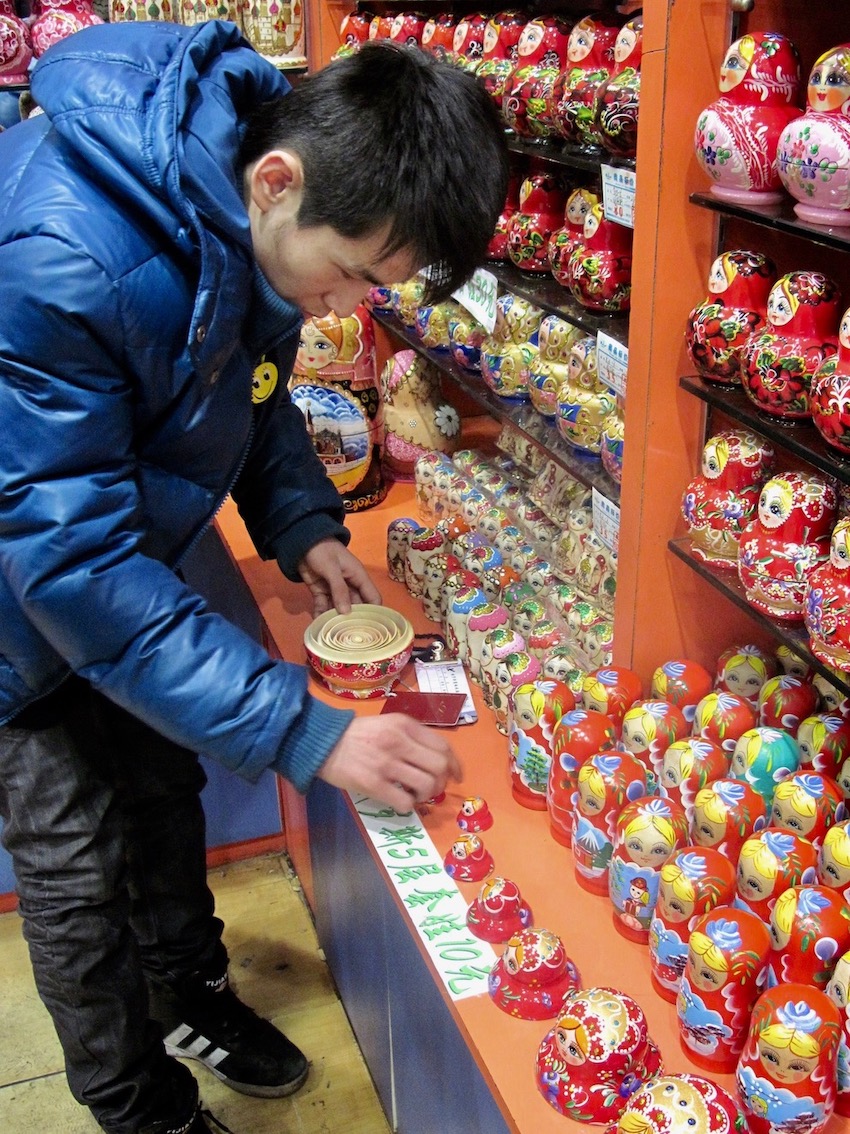 Positioned just an hour and a half from the Russian border, Harbin also treats visitors to scattered bursts of old time Russia, including stores selling Matryoshka dolls. 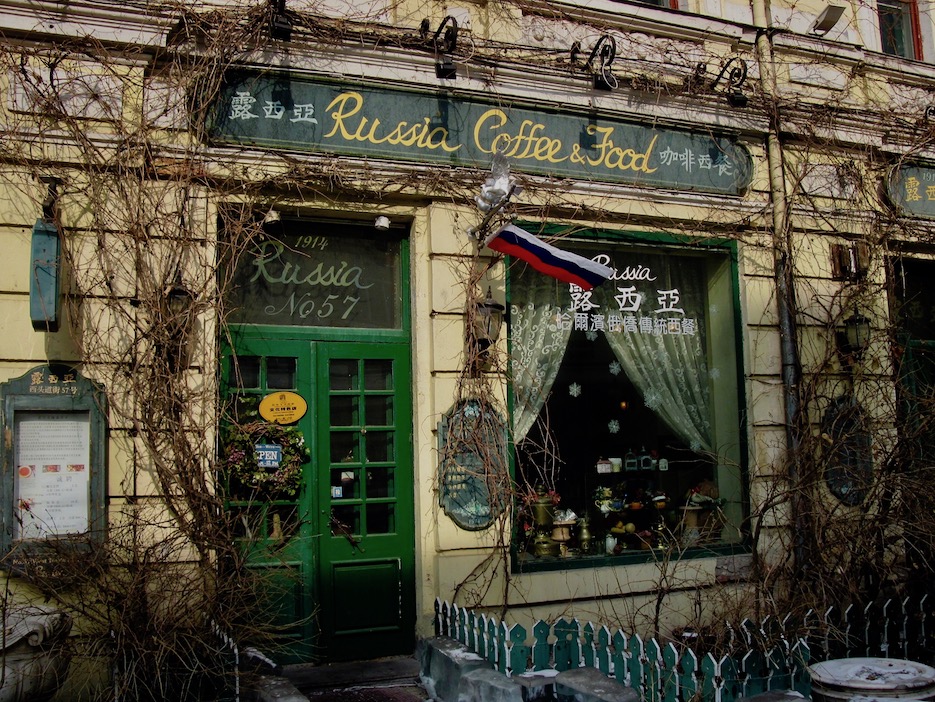 There’s even a classical Soviet style restaurant, the gorgeous Russian Coffee & Food. Actually it’s worth eating here just for the interior, which is stuffed full of antique furniture and framed photographs of Moscow. 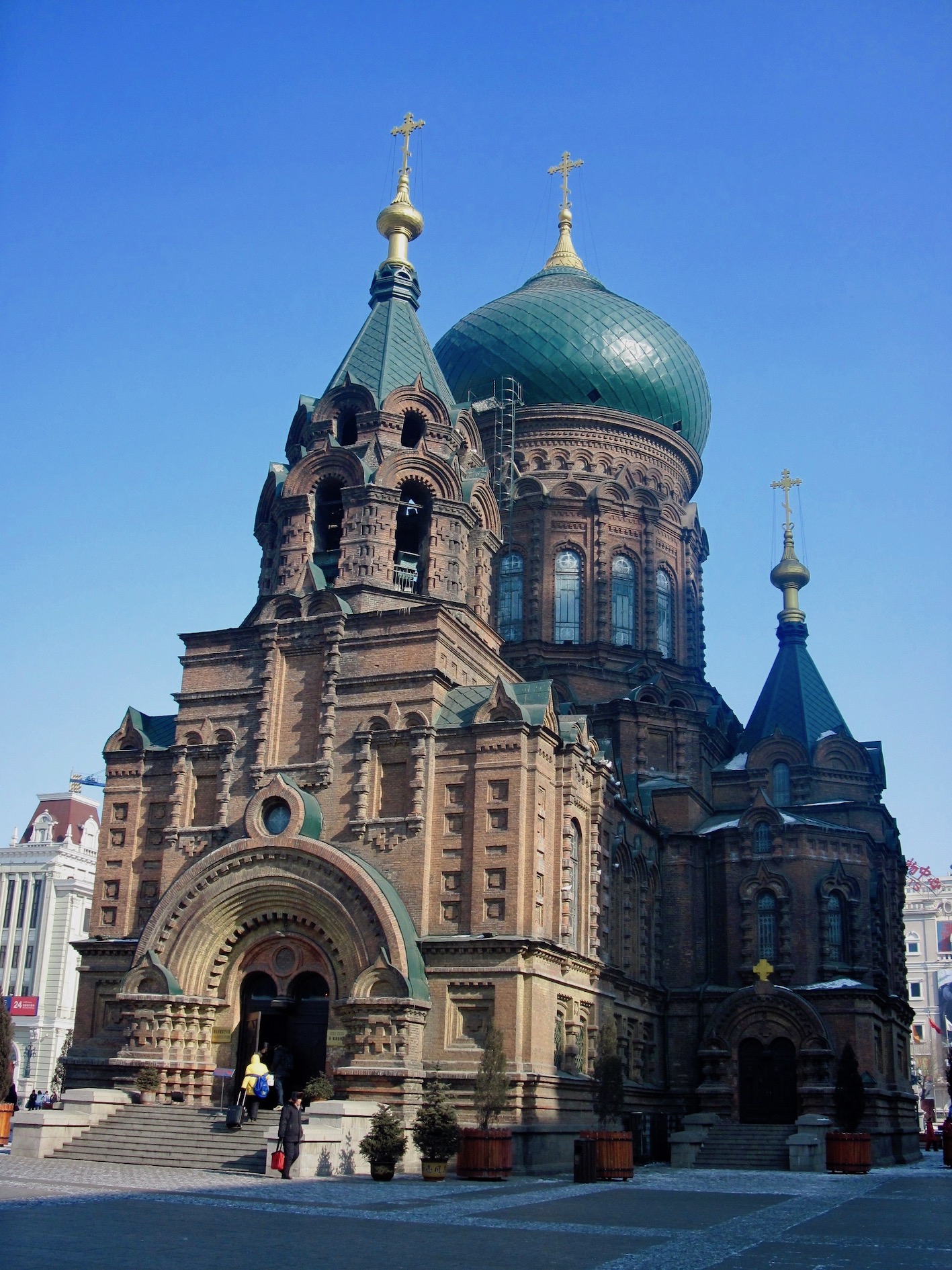 The epicentre of Harbin’s Russian vibe comes with the magnificent Saint Sophia Church and its distinctive green, onion-shaped dome. Inside, it’s enchantingly run down and has a cool exhibition of photographs documenting the city’s metamorphosis through the years. 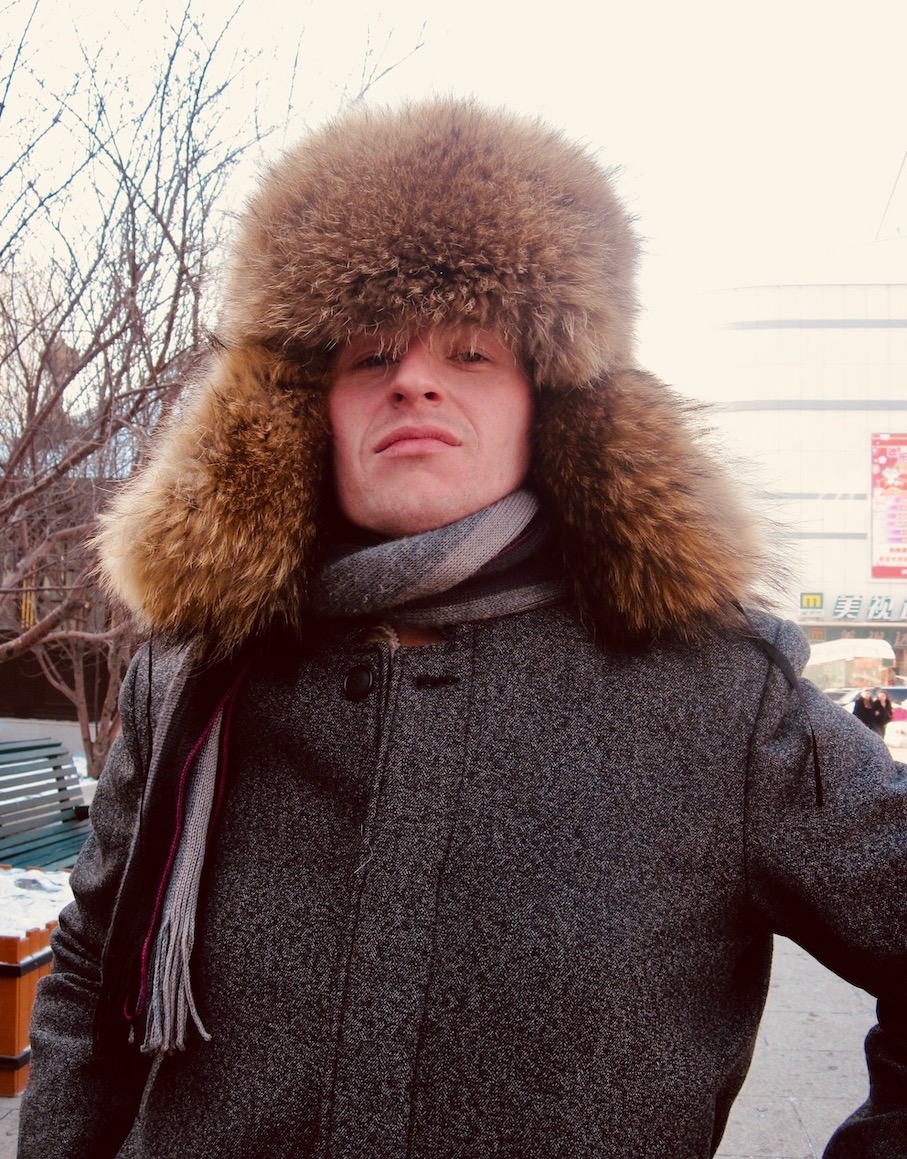 Have you ever wanted to get your hands on a Russian ushanka hat? There’s usually a guy selling them from a little market stall directly outside Saint Sophia Church. Be warned though, they’re pretty pricy! Thankfully the dude didn’t mind me taking a photo with one of his hats and giving it my best Russian soldier pose. 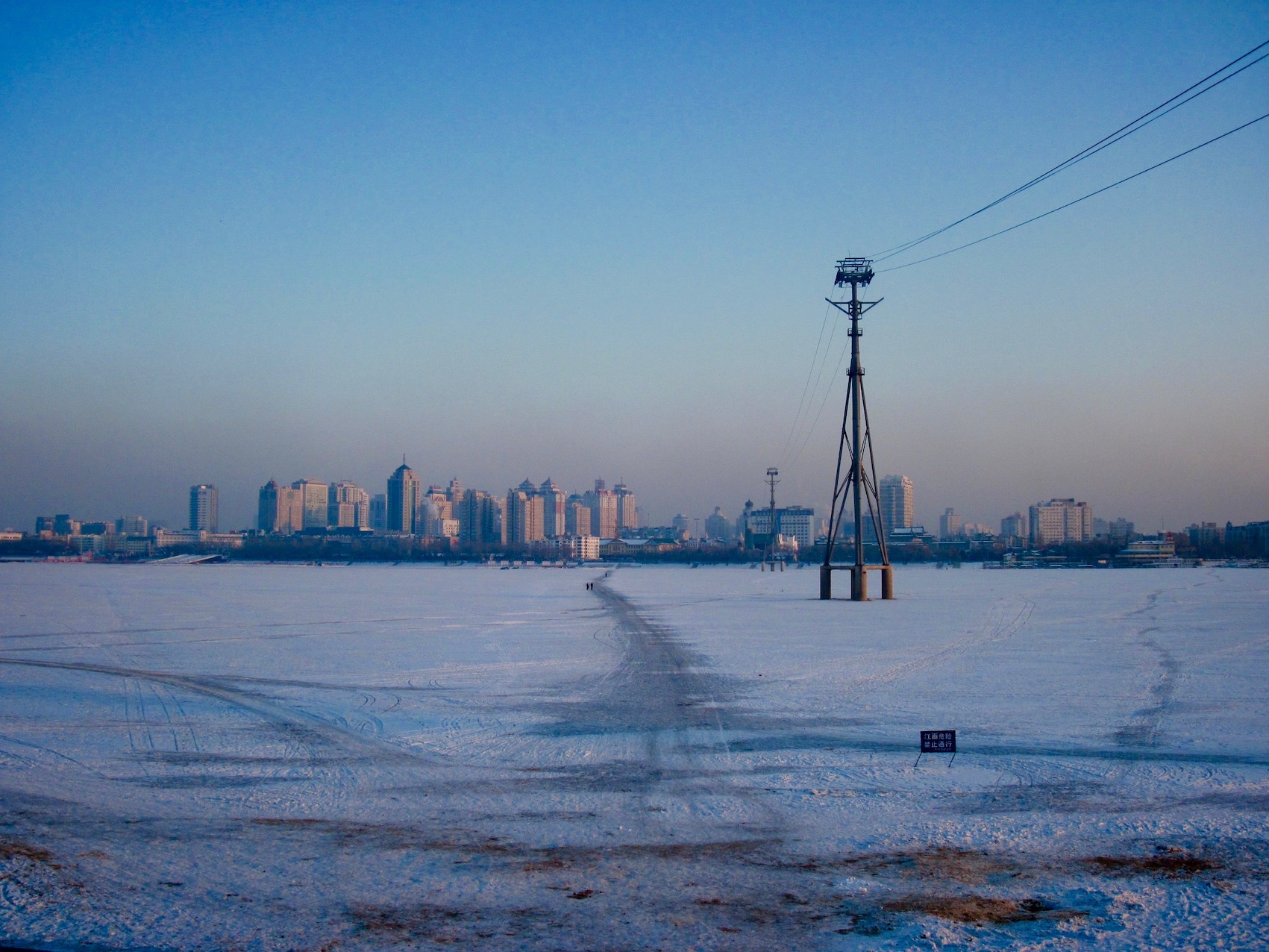 For most of the year Harbin’s wide, murky river is a predominantly unremarkable sight. However, if you time your visit for February (which you should to catch the Ice and Snow Sculpture Festival), then it’s usually completely frozen. It took me about half an hour to cross it and the views and colors from all directions were absolutely gorgeous. 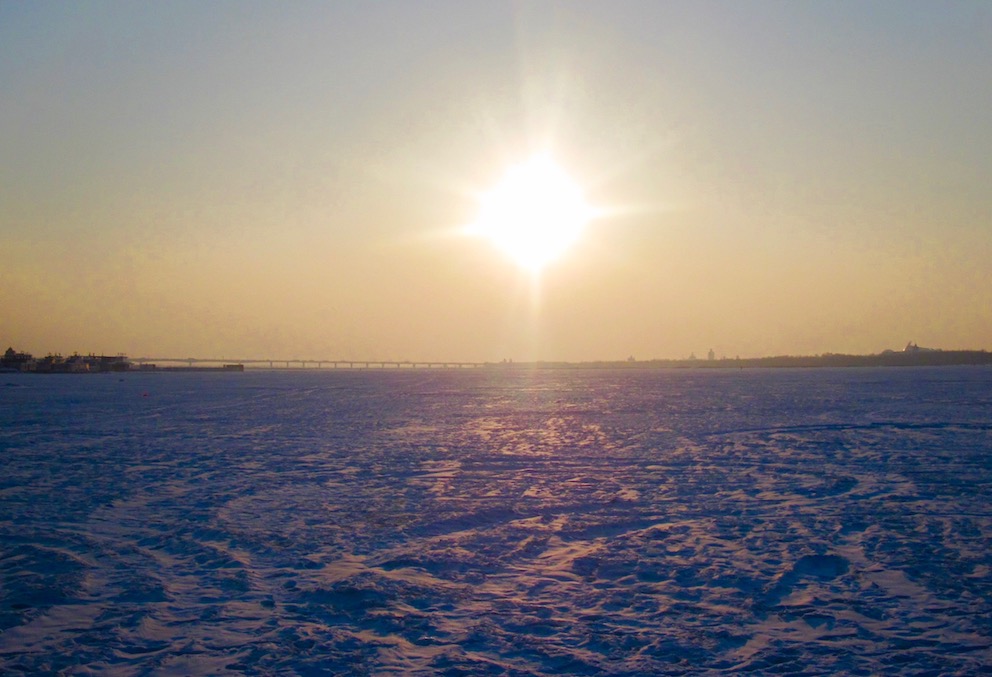 Like these? Then why not also take a look at my zillion reports from all around China.