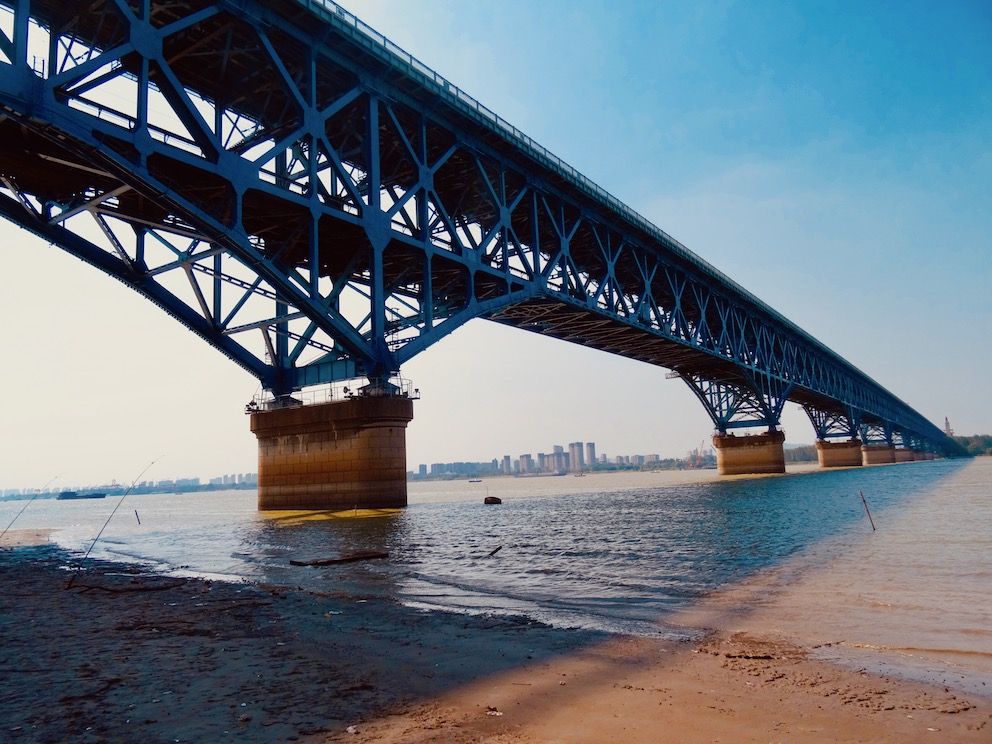 October 2018. It was day four of China’s Golden Week when I awoke to another perfect blue sky after a serious night of hotel sleep. Jaylin and I had been utterly exhausted tackling the multitudes at Nanjing’s heavyweight attractions. As a result, I had zero interest for a repeat performance. I felt desperate for something low key, a place I could escape to and gather my thoughts away from the braying masses. As it turned out, Jaylin didn’t even want to leave the hotel! Therefore I headed out alone to see the city’s Yangtze River Bridge. Opened in 1968, this 1,576 meter structure is one of China’s longest bridges. Visitors can access it through the River Bridge Park & Museum. 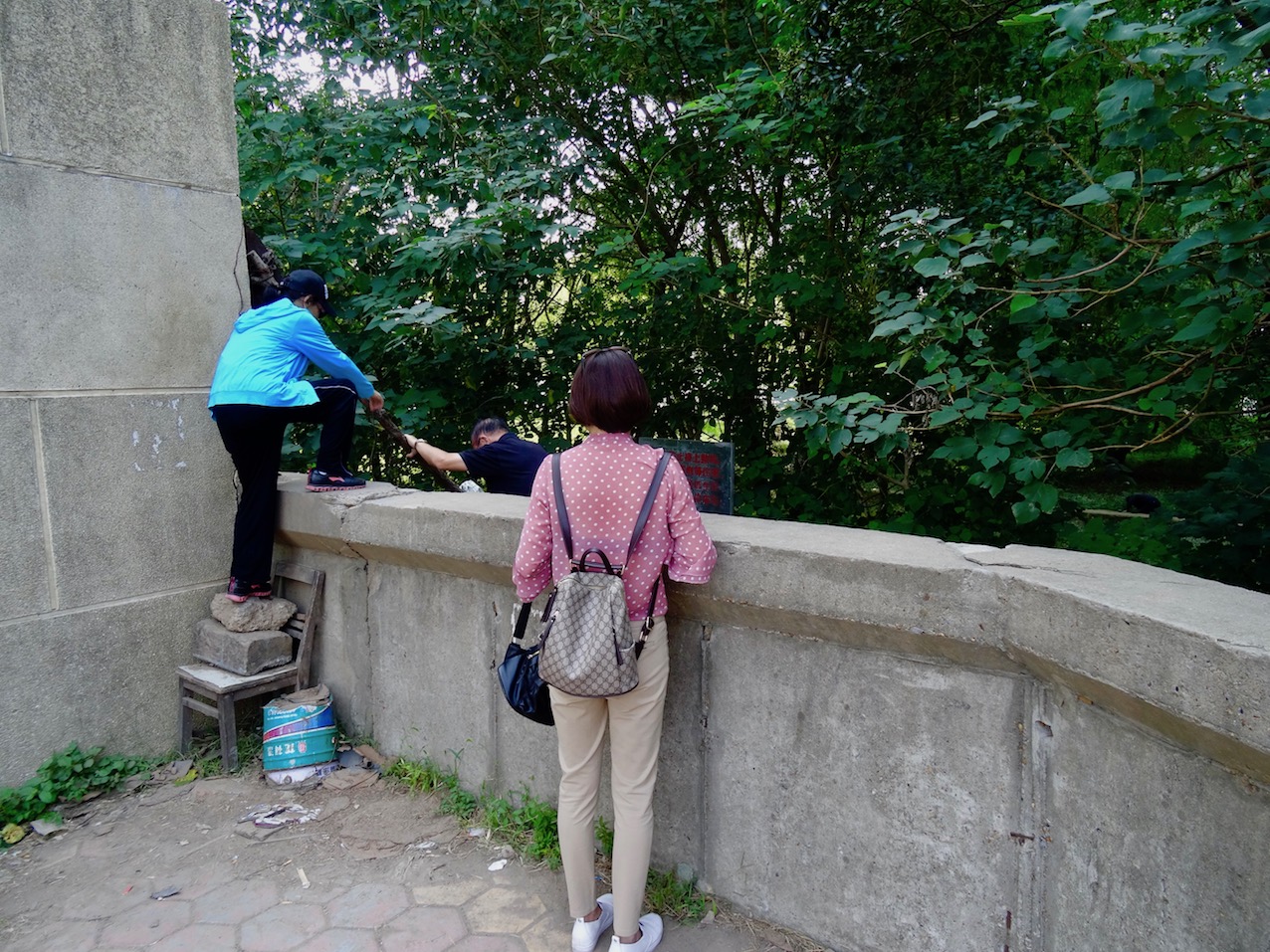 Yangtze River Bridge Park is a fair distance outside the city centre. Feeling lazy, I let my taxi driver deposit me directly outside the park’s sad looking ticket office. However, it was only after I’d paid that the attendant informed me that the museum and sculpture park were closed for renovations! Even more annoying, he explained how I also wouldn’t be able to access the bridge’s pedestrian walkway! 🙁

Oh China, you do it to me so often. It was just another example of what Wonderboy and I call The Inconvenience Committee. With my mood rapidly souring, I decided to take a stroll through the small section of uninspiring park that was still open. I was just starting to lose hope when I caught sight of some Chinese tourists clambering over a section of wall into the woods. Hmm, ok. So I let them disappear before hopping over myself to see what lay beyond. 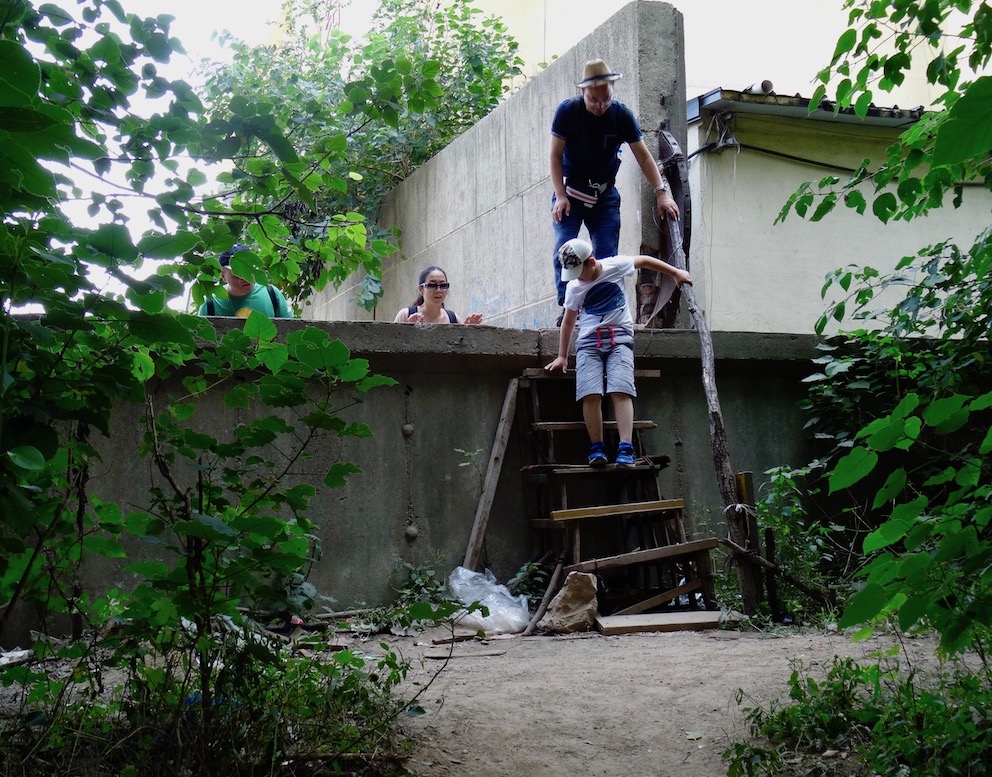 A five minute walk through the trees brought me out onto a littered beach with kickass views of Yangtze River Bridge. Finally, a win!

I saw a few fishermen dotted about that day. Elsewhere, a family picnicked under a tree, while a sittin’ doin’ nothin’ dude gazed out across the water from a wooden chair. He seemed totally oblivious to anyone else, or indeed the garbage strewn around his weathered boots. 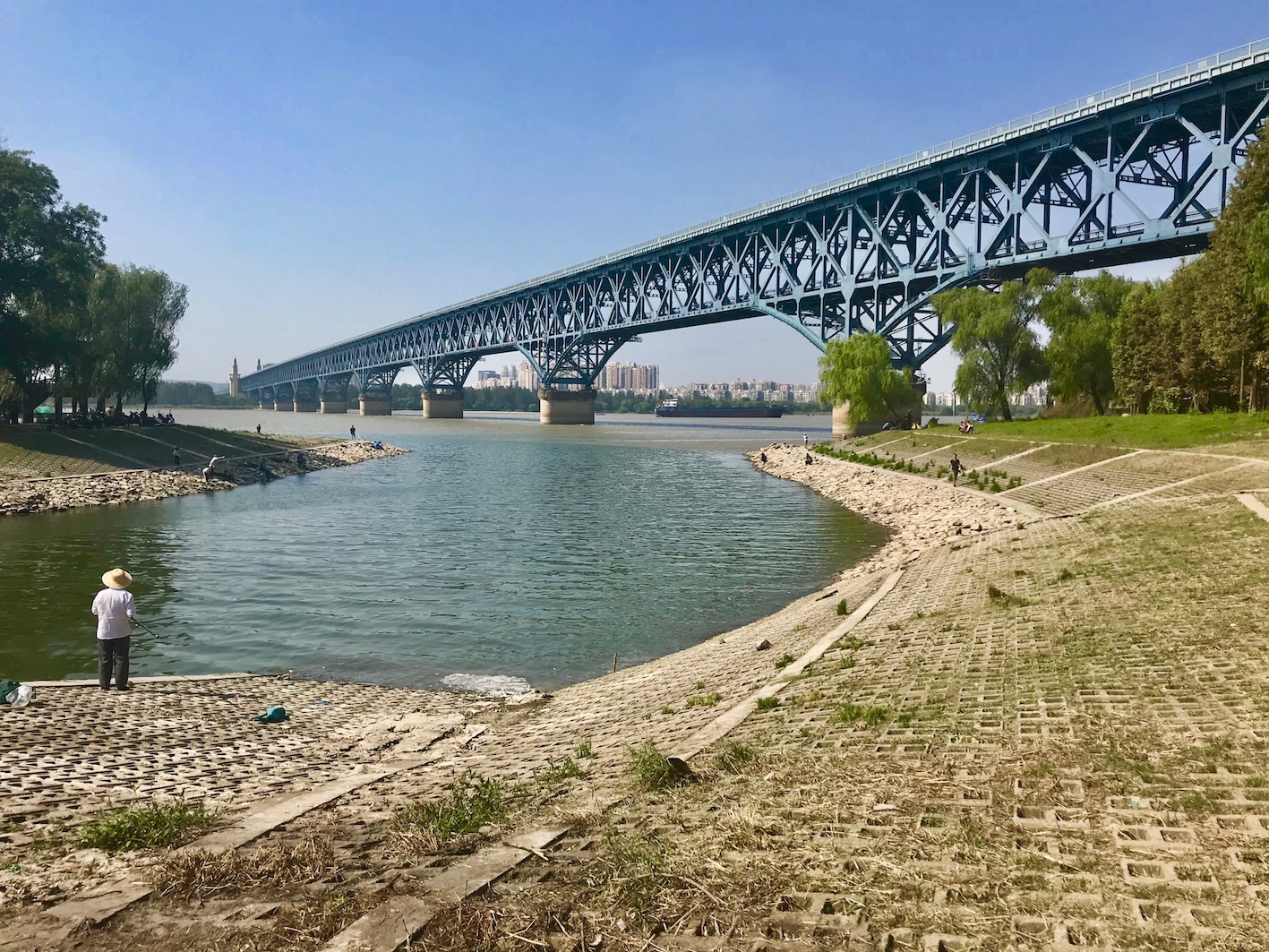 Yangtze River Bridge is a double decker structure with a 4.5km road on top and a train line beneath. In fact, I actually got to see a train rumble across as I stood there taking in the view. I’d read that the bridge is the world’s number one suicide spot.

Fortunately I didn’t witness anyone throwing themselves off that day. Nor did I see any trace of Nanjing’s famous suicide watchman. Yup, there’s usually a local guy here keeping an eye on things. Apparently he’s saved around two hundred people over the years! It was certainly a pity to have missed him, but I guess even heroes need time off during Golden Week. For more on this guy, check out this interesting article from Global Times. 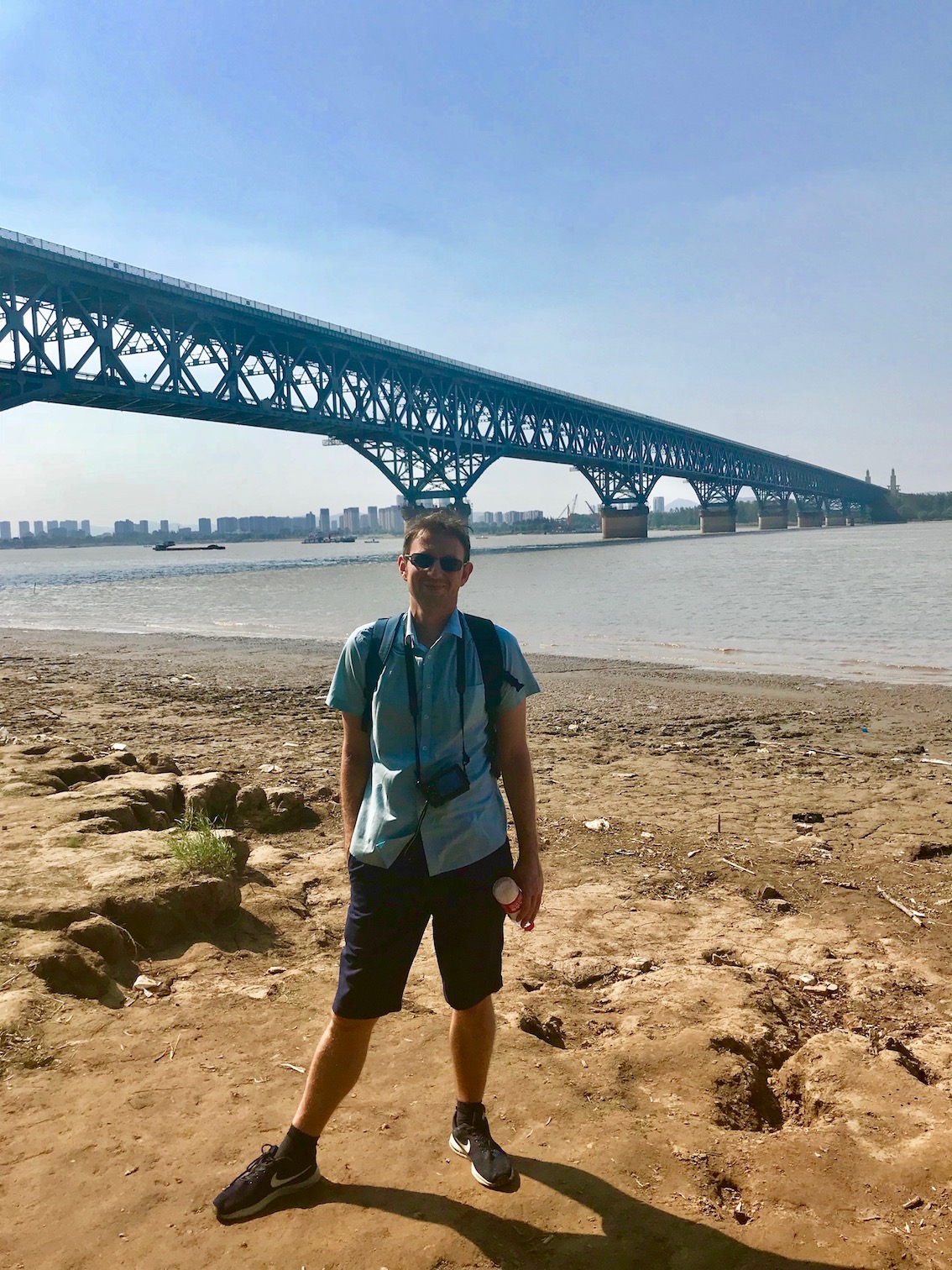 The further down the beach you go the quieter it gets. A passing local man was kind enough to take this photo for me. 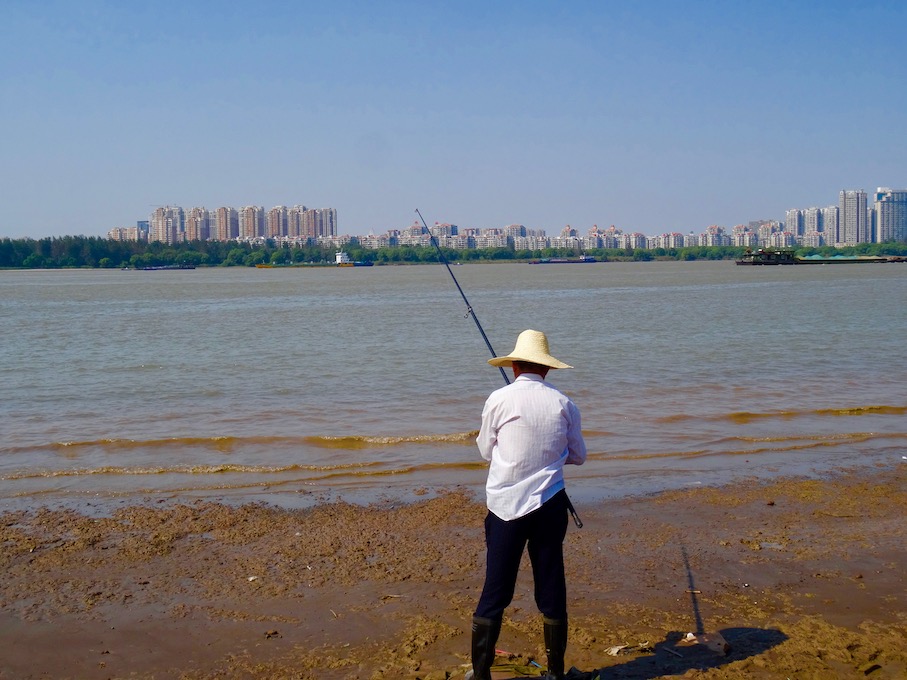 A quick check online tells me that Yangtze River Bridge Park & Museum reopened in February 2019. Furthermore, I’ve read that the beach and woods have received a much needed cleanup. If you’re interested in coming here, the nearest subway stop is Shangyuanmen (Line 3, green). From there it’s a 2km walk. If you’re coming by taxi, ask to be dropped off at Nanbao Gongyuan.