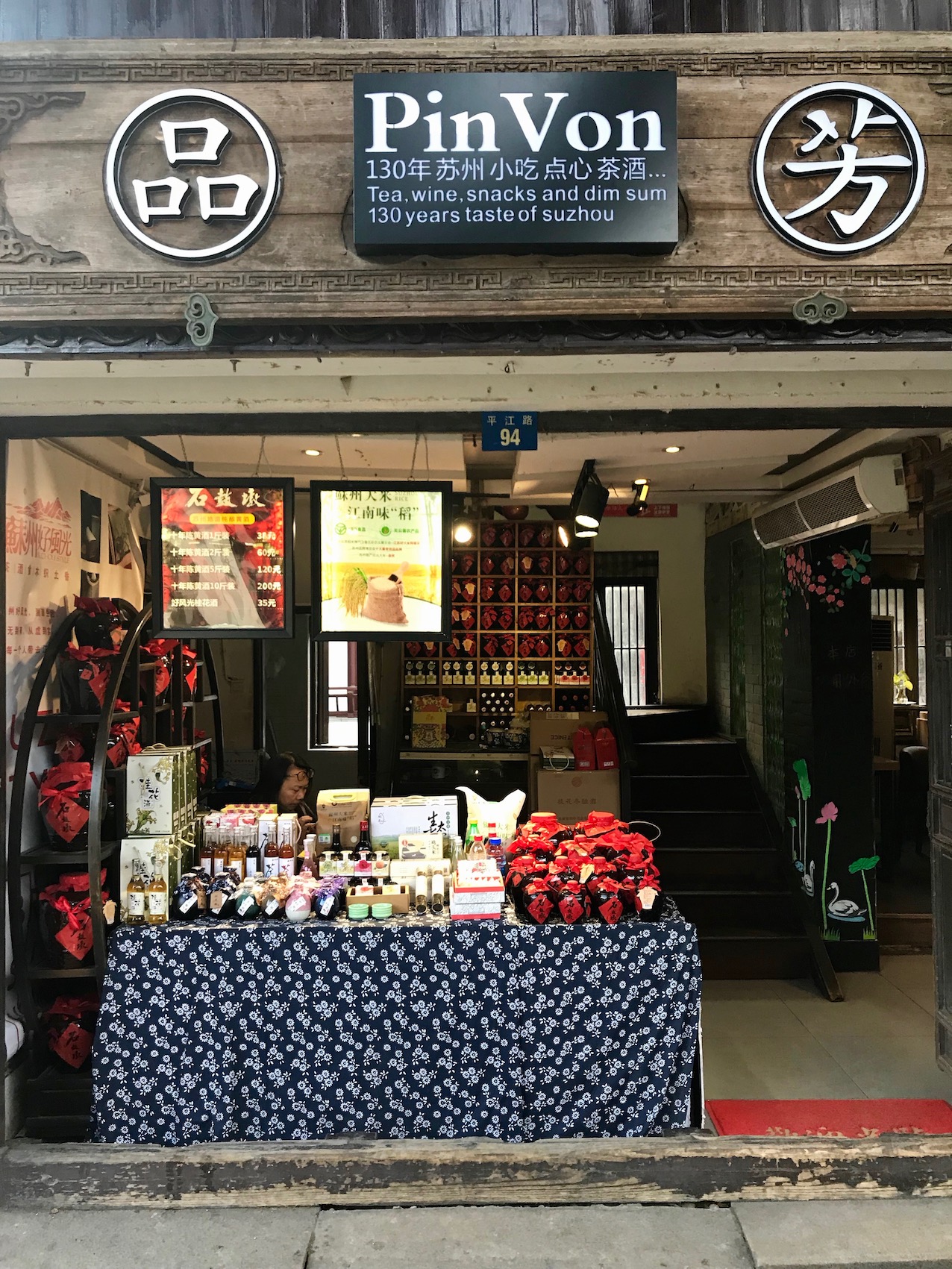 December 2018. It was Christmas Eve in Suzhou and late afternoon was starting to creep into early evening. I’d just finished my explorations of the city’s romantic Pingjiang Road canal street and my stomach was rumbling. Luckily, there were a wealth of eating options around me. However, I already knew exactly where I was heading. Located right on Pingjiang Road itself (number 94) in a one hundred and thirty year old wooden building, Pin Von Restaurant is a top Suzhou eatery and one of the world’s most famous teahouses to boot. 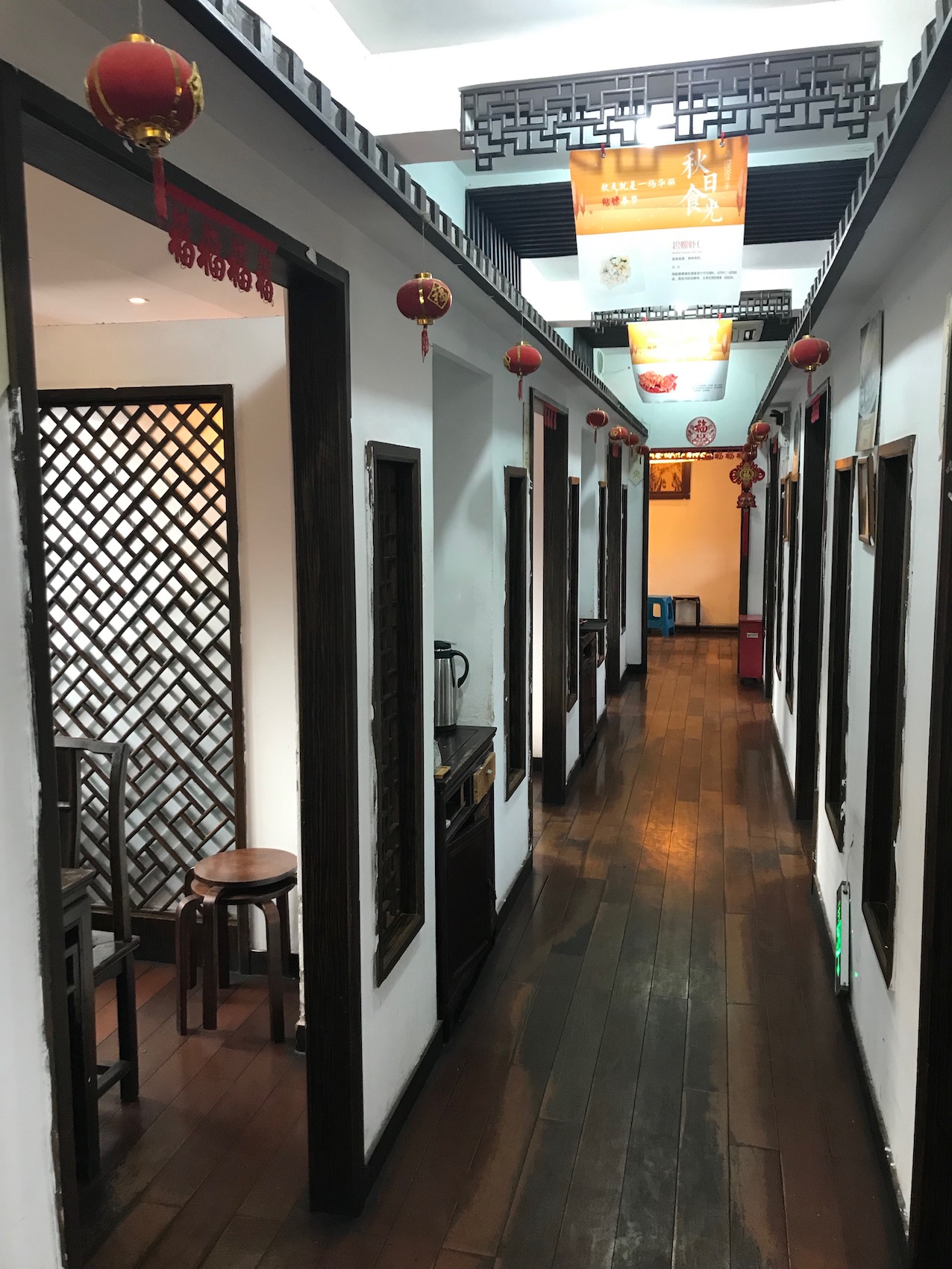 Tea has never really been my thing, hence I went straight for Pin Von’s food menu. The ground floor was already busy with chomping families, thus I opted to take the creaky staircase upstairs. This proved to be an excellent decision, as the entire floor was empty! The narrow corridor holds eight tastefully decorated dining rooms. There are four on each side, while a larger, family sized chamber takes up the far wall. 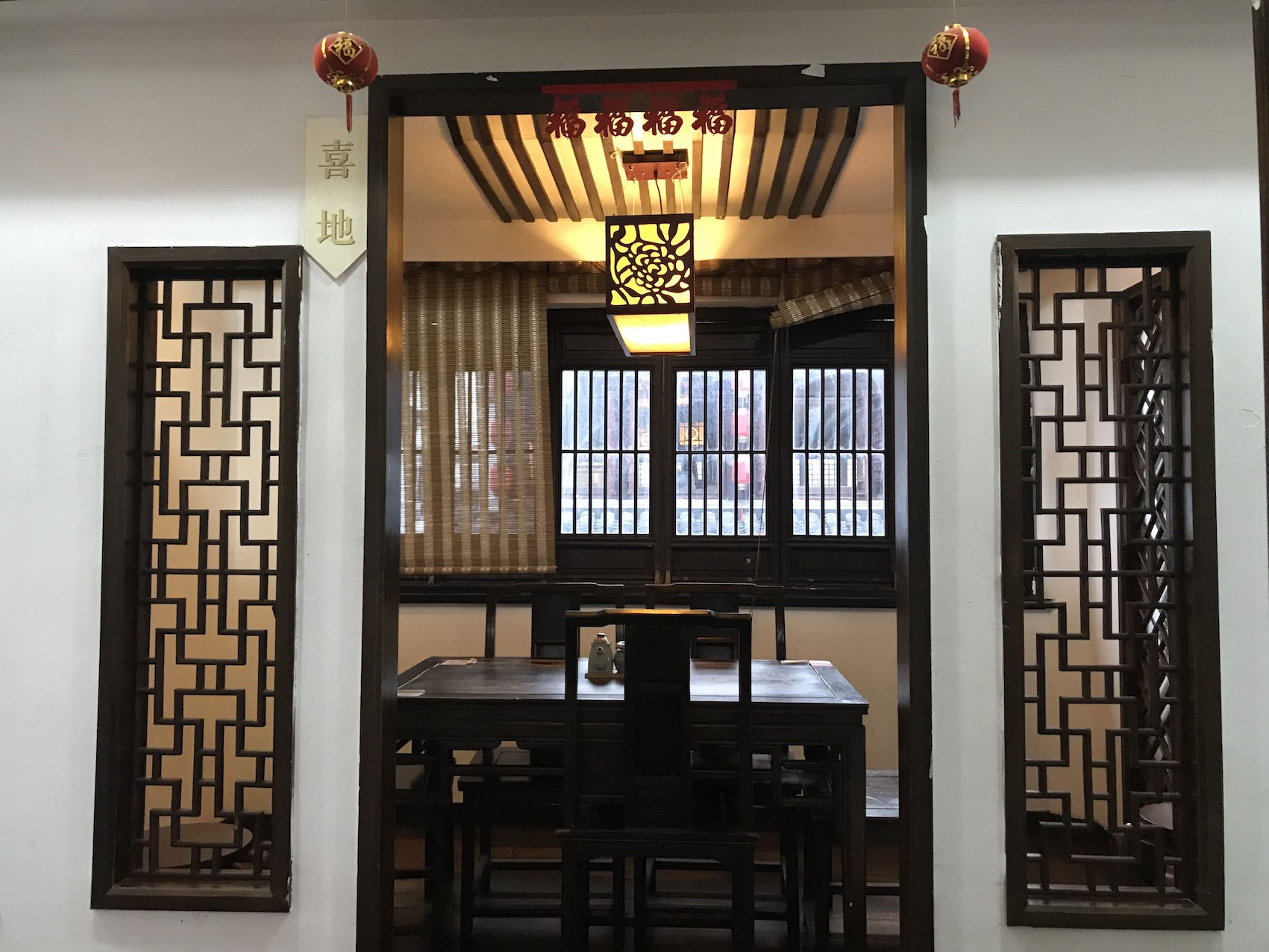 I settled into this cosy room with a paper menu from downstairs. You also get a pencil, which allows you to simply tick off what you want after having a giggle at some of the amusing Chinglish translations. “Saliva Chicken, eh?” mused Wonderboy by WeChat voice message as I relayed some of the dish names to him. “Mate, don’t be surprised if that involves the waiter actually spitting on your plate after he’s served it!” 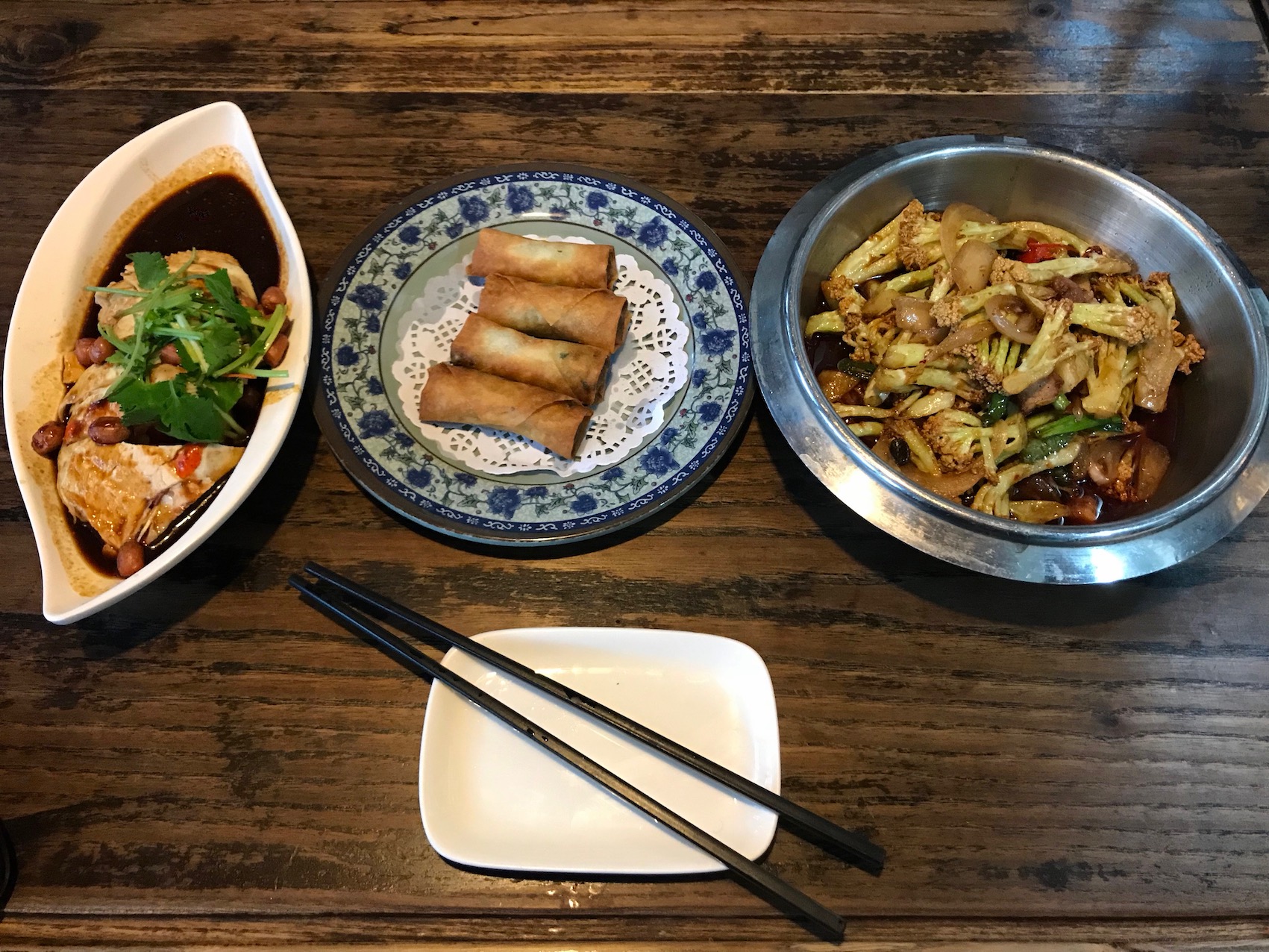 Fortunately, Pin Von’s Saliva chicken (far left) went down a treat! The waiter served it cold on the bone in a tangy vinaigrette with chopped nuts and coriander. The crispy Shepherd’s Purse Vegetable Spring Rolls were great too. Best of all, the pan fried organic cauliflower with minced beef, garlic and red peppers really hit the spot. Absolutely delicious! 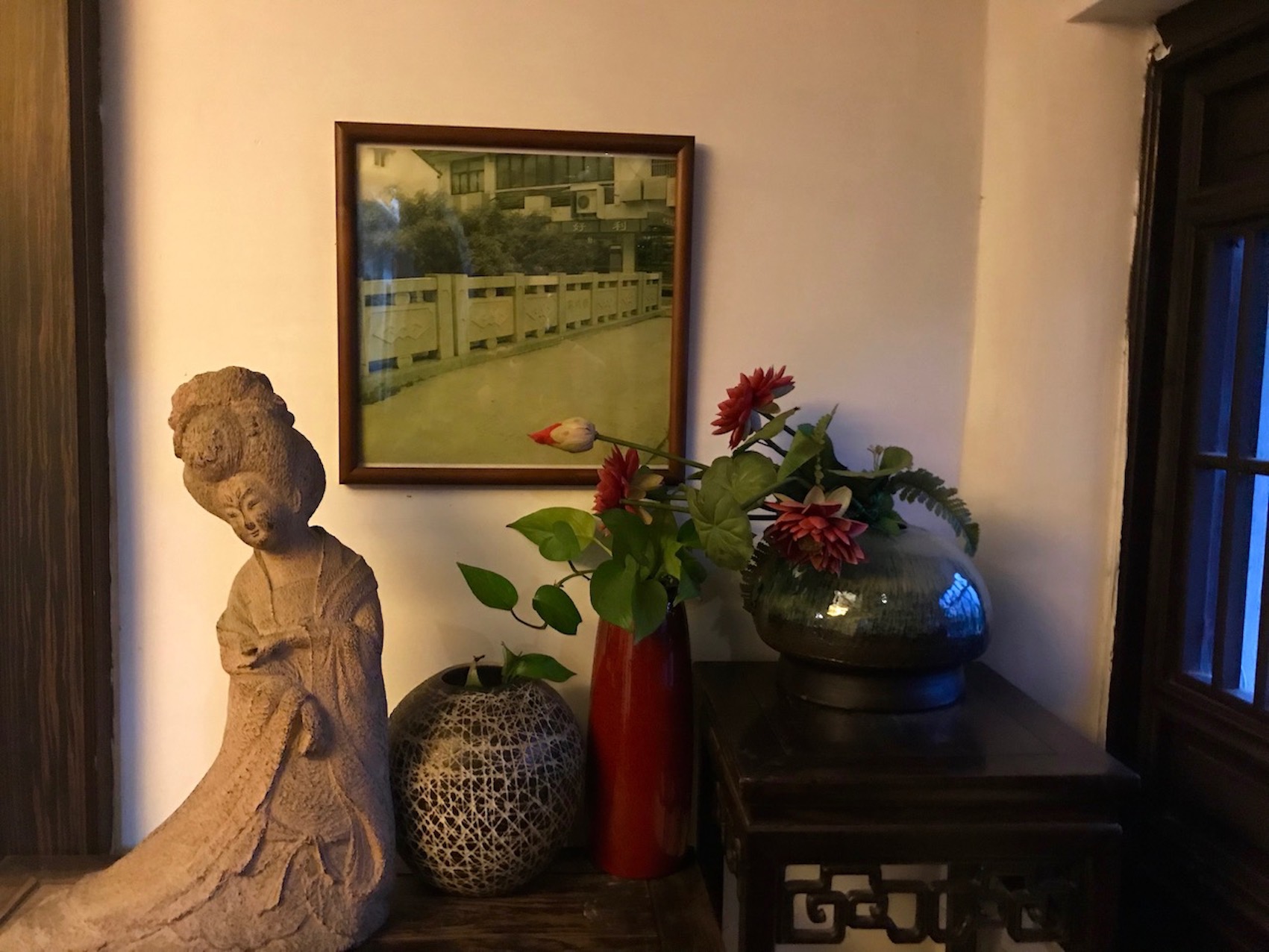 Finally, my bill came to a very reasonable 79RMB (£9/€10/$11.50). For those wanting a bit of peace and quiet, my visit at around 17:00 was perfect. After dark Pin Von gets packed and there’s often traditional Chinese music and singing on offer. If you find yourself on Pingjiang Road soaking up the canal vibe, you’d be mad not to pop into Pin Von Restaurant for either a bite or a cup of tea!

You can also read more about this cool city with my travel guide to Suzhou, or maybe delve further afield with my stacks of reports from across China.